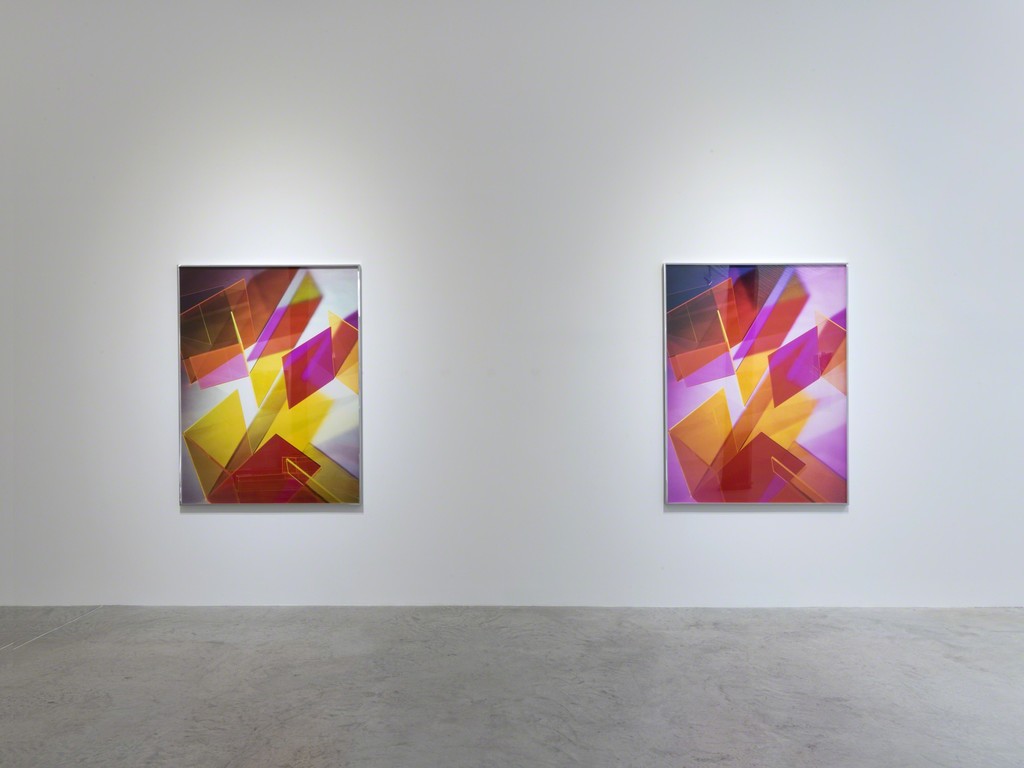 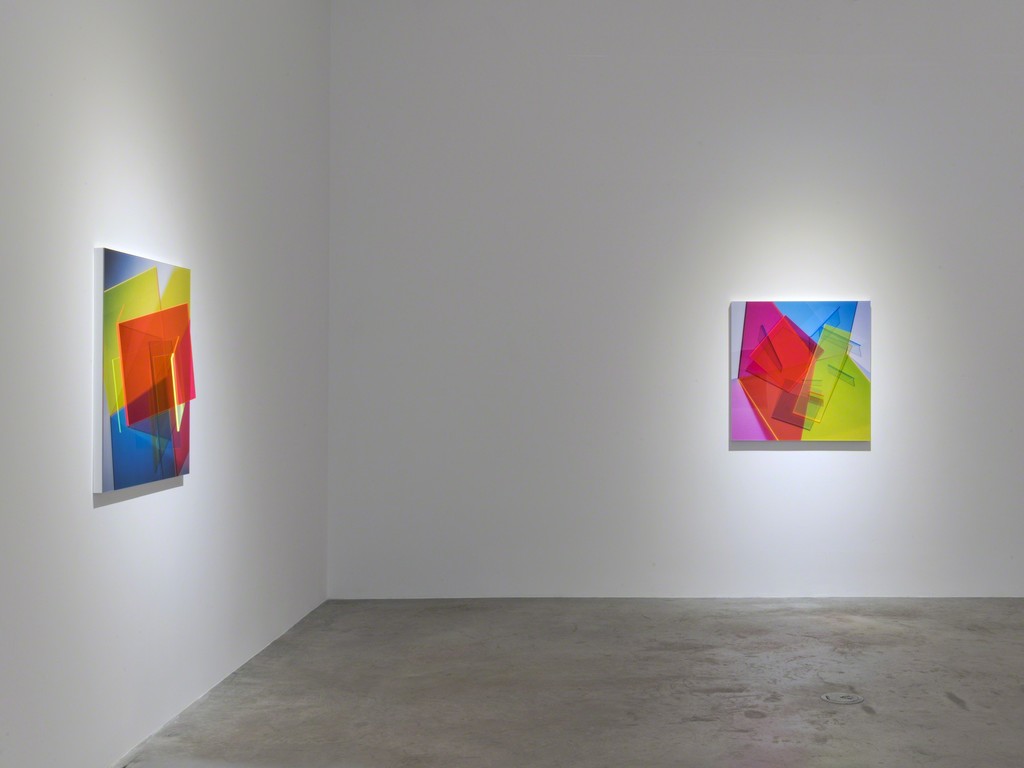 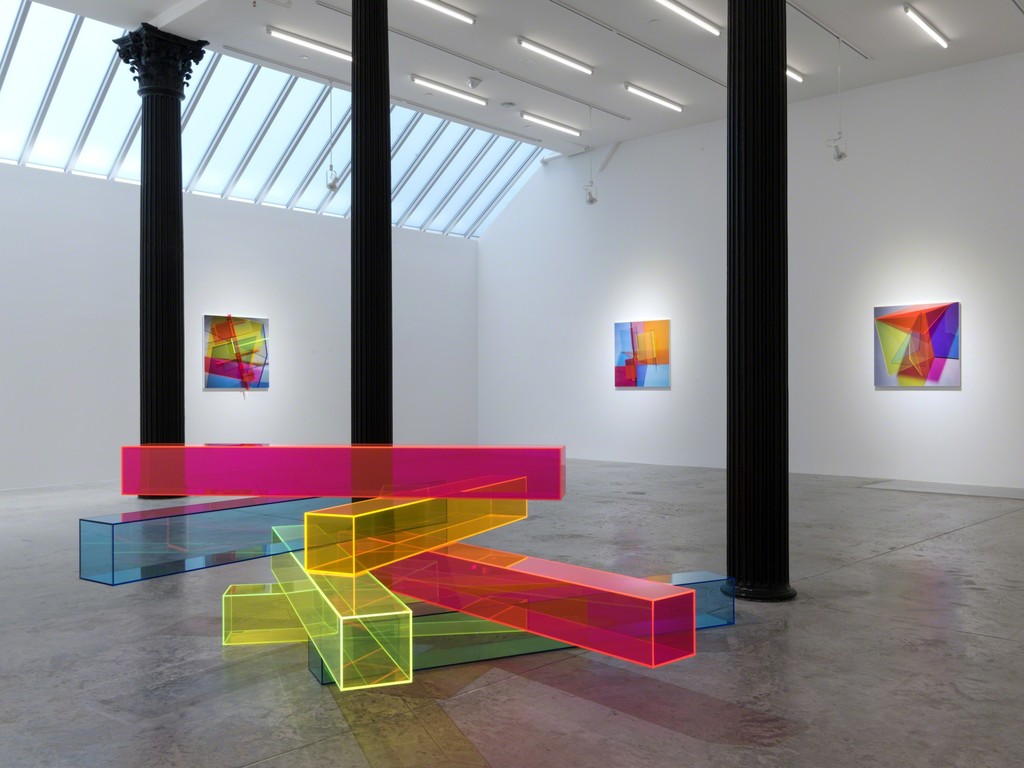 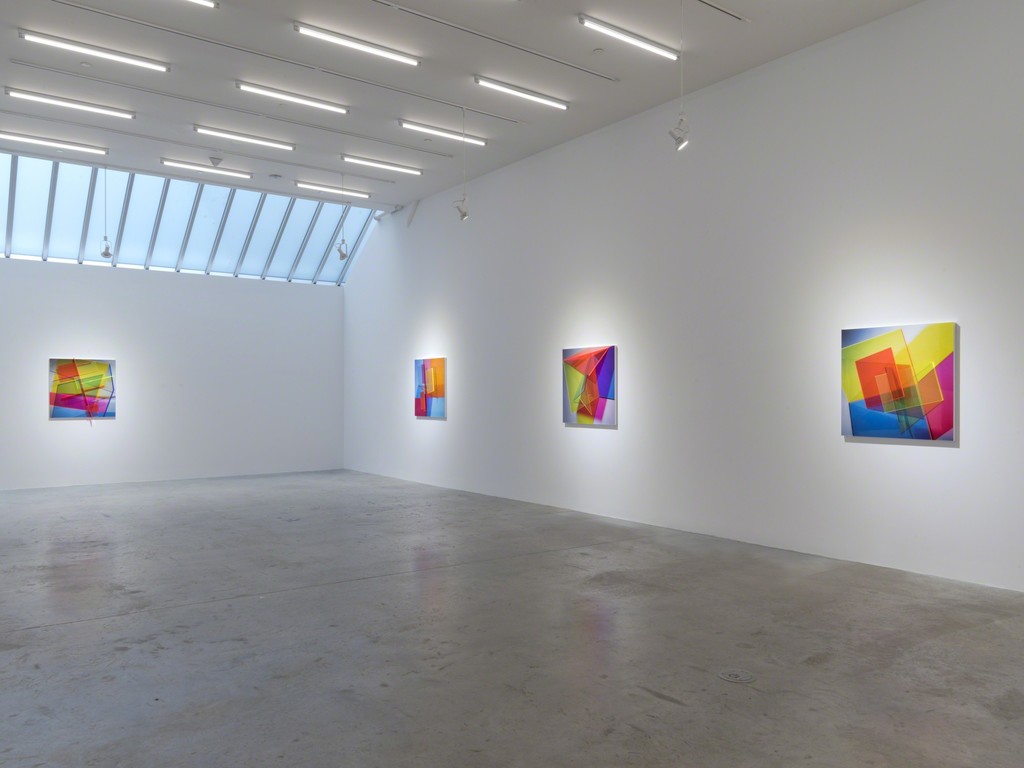 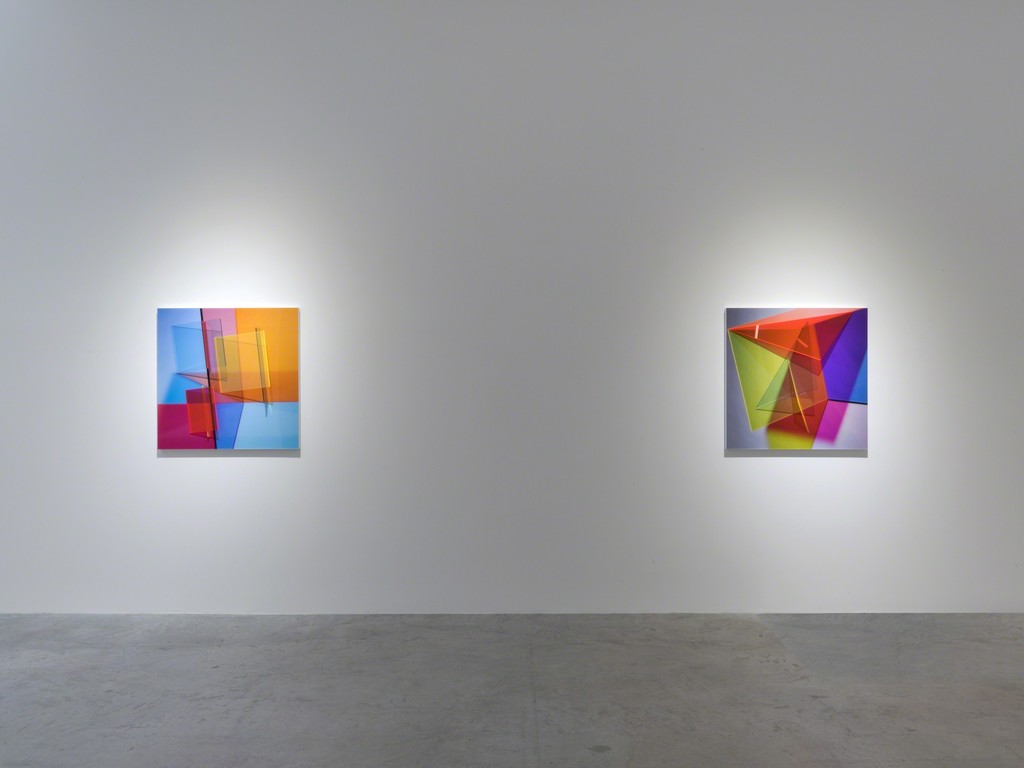 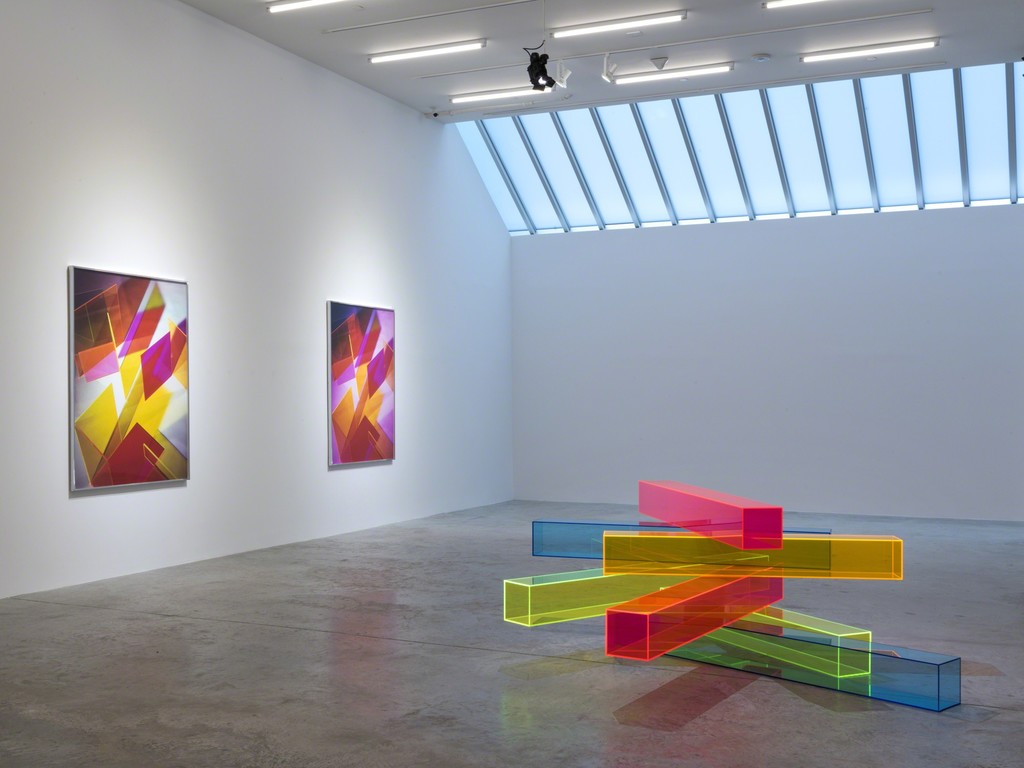 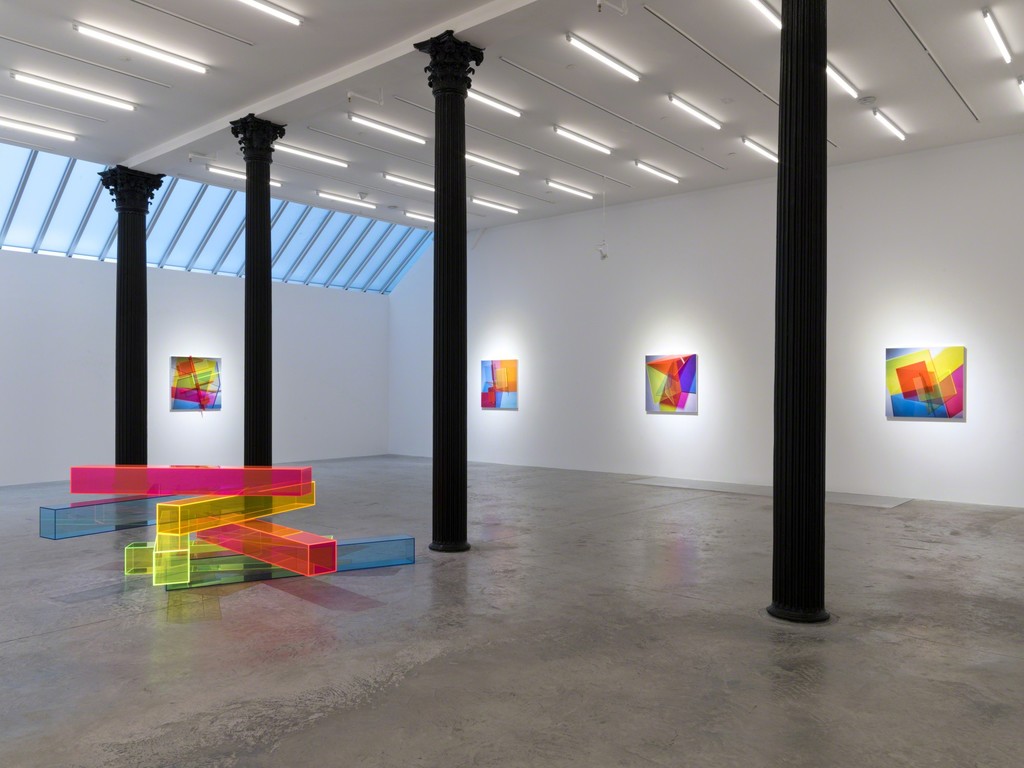 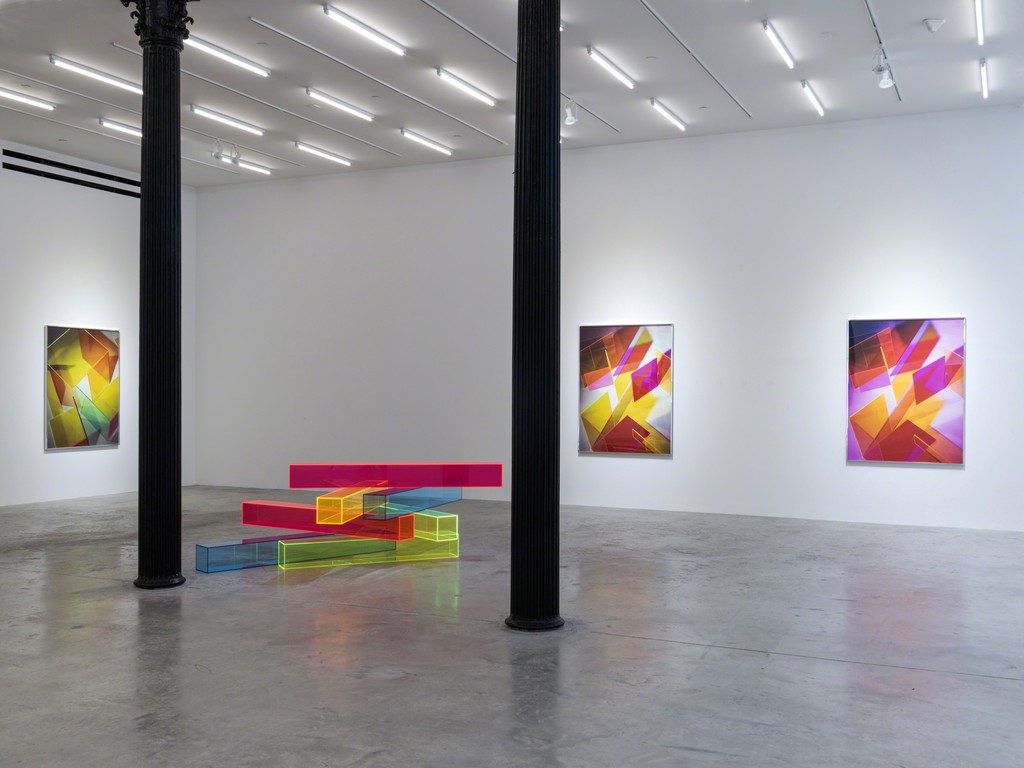 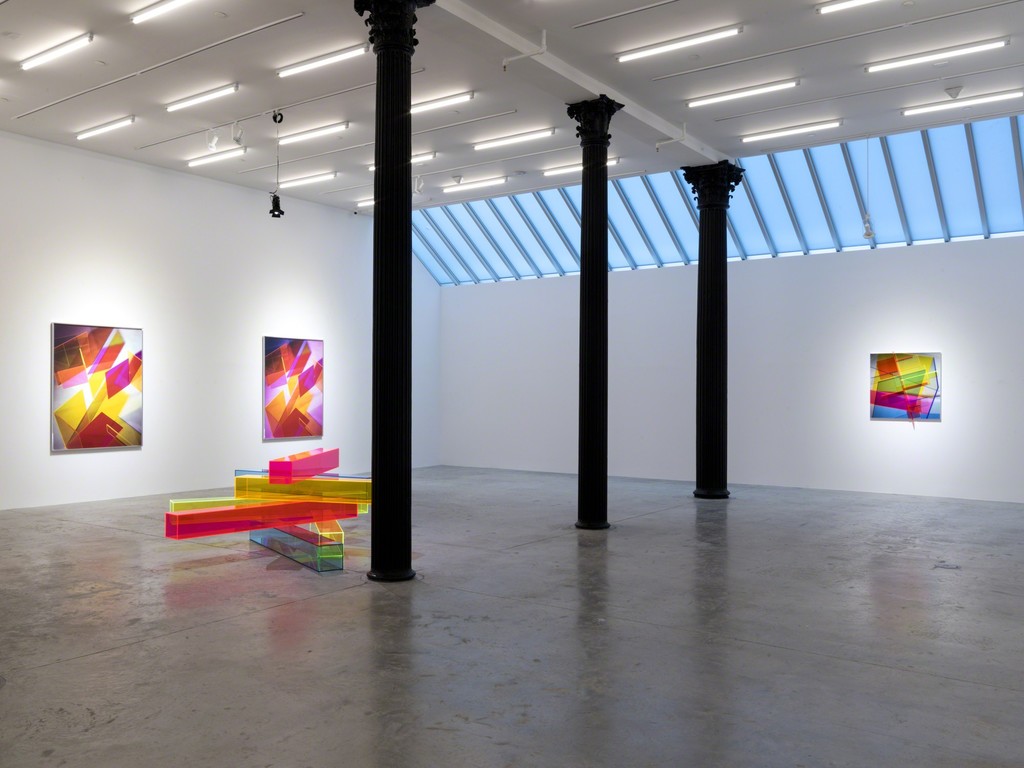 Endlessly experimental and now in her eighth decade, Kasten will show three recent bodies of work: an extension of her colorful, large scale photographs, Collisions, and new sculptural, photographic hybrids entitled Progressions. She will also present Parallels—her first freestanding sculpture since the early 1970s. In architectural terminology, the parti pris is the chief organizing principle of a project. Kasten utilizes the structural principles of architecture and process in her new works, which can be read within the realm of architectural diagrams.

Kasten’s inventive Progressions, composed of face-mounted photographs with geometric acrylic shapes affixed to the surface, emphasize the duality of the photograph and of the relief’s sculptural forms. Transitioning from photographic representation as in the Collisions to address spatial ambiguities, Kasten incorporates concrete materiality while maintaining each element’s mysterious and elusive qualities. The image in the photograph depicts space and even recedes into the depths of implied space, while the three-dimensional components extend outward. Both features—the image and the acrylic fragments—act as a bridge between dimensions.

As photographic hybrids, the Progressions are abstract objects, and the relationship between the two components ceaselessly oscillates back and forth. With both elements of sculpture and photography, the new works become something else entirely, depending on and informing one another. The shapes and shadows that they cast are crucial; creating what Kasten deems a “temporary photogram.”

Finally, Parallels, the large sculpture central to the exhibition, brings the transparency of form that exists in Kasten’s images fully into the viewers’ space and experience. In Parallels, she pushes the modernist, formal geometric order of these cubic constructions askew, utilizing a point of balance for its form. The fluorescent, acrylic components of Parallels are cantilevered on top of one another, each depending on the other, relying on the tension between each element and reaffirming an intuitive process.

Barbara Kasten was born in 1936 in Chicago, Illinois. She received her BFA from the University of Arizona in 1959 and MFA from the California College of Arts and Crafts in 1970. She currently lives and works in Chicago, Illinois. Most recently, Kasten was the subject of a retrospective at the Institute of Contemporary Art in Philadelphia that travelled to the Graham Foundation in Chicago and the Los Angeles Museum of Contemporary Art. Her work is featured in the collections of the Museum of Modern Art in New York, the Tate Modern in London, The Whitney Museum of American Art and the Guggenheim Museum in New York, the High Museum of Art in Atlanta, The Museum of Fine Arts in Houston, The Centre Pompidou, and the Smithsonian American Art Museum in Washington, D.C. among many others.