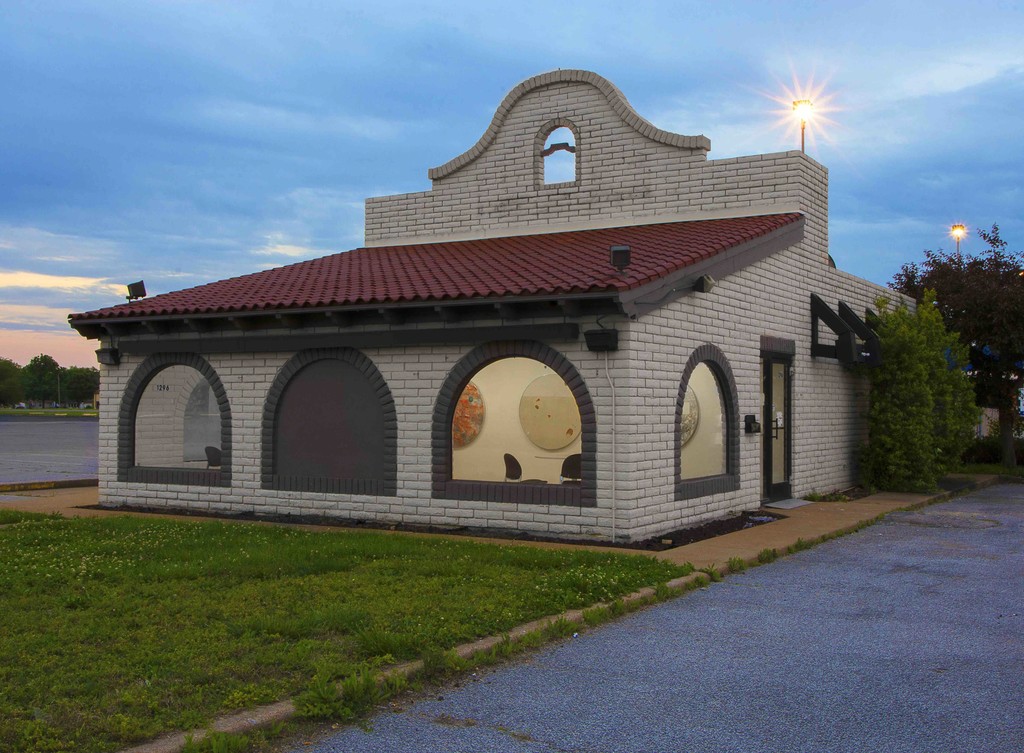 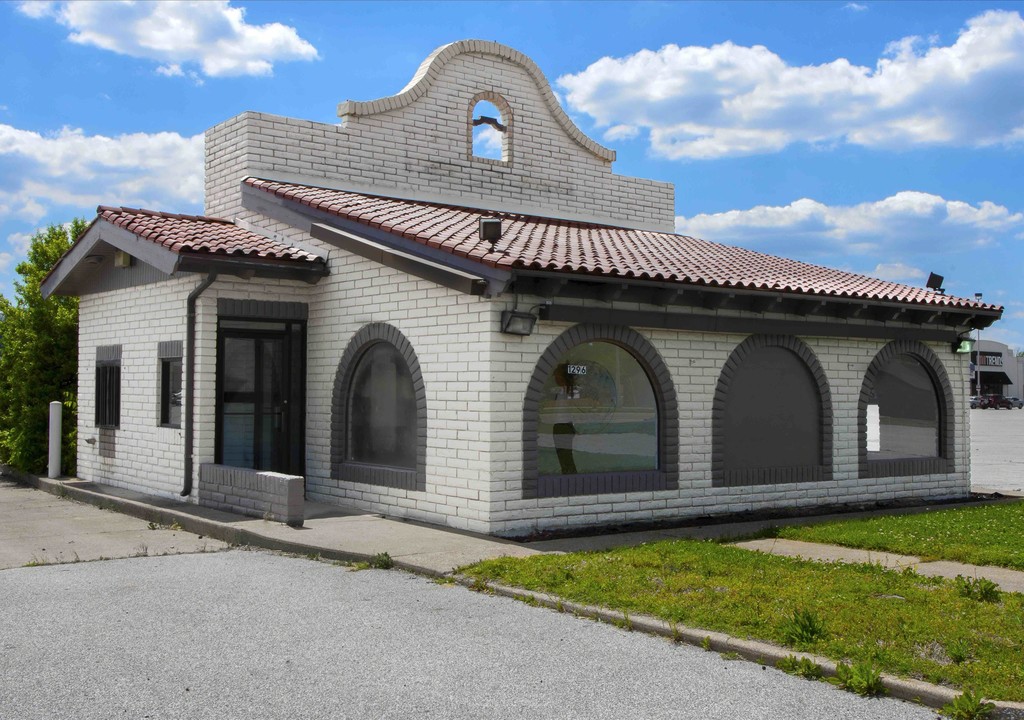 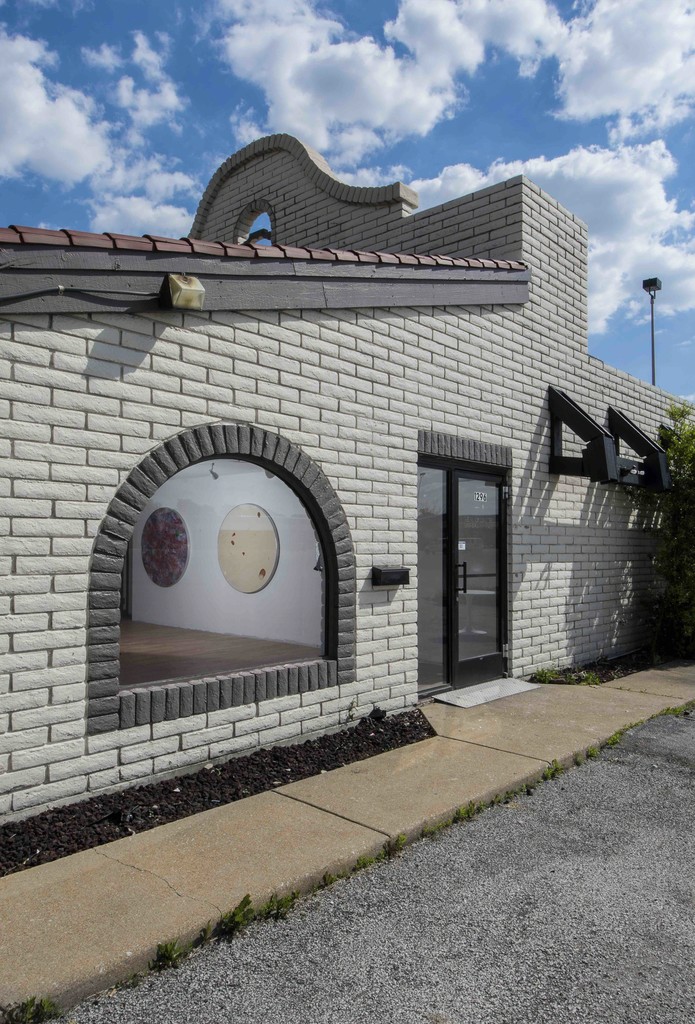 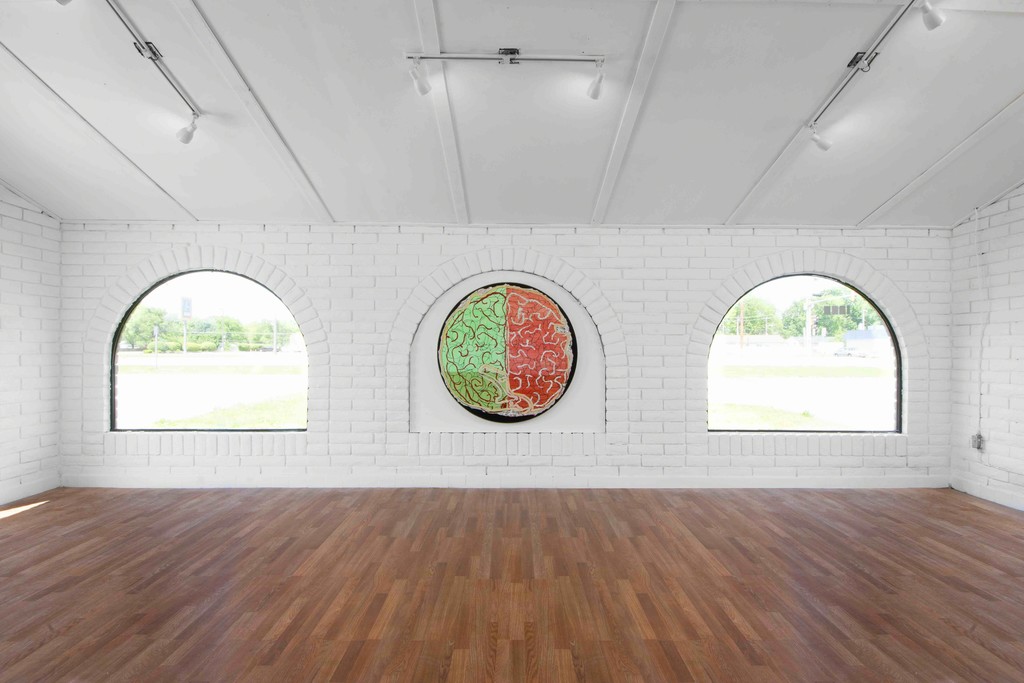 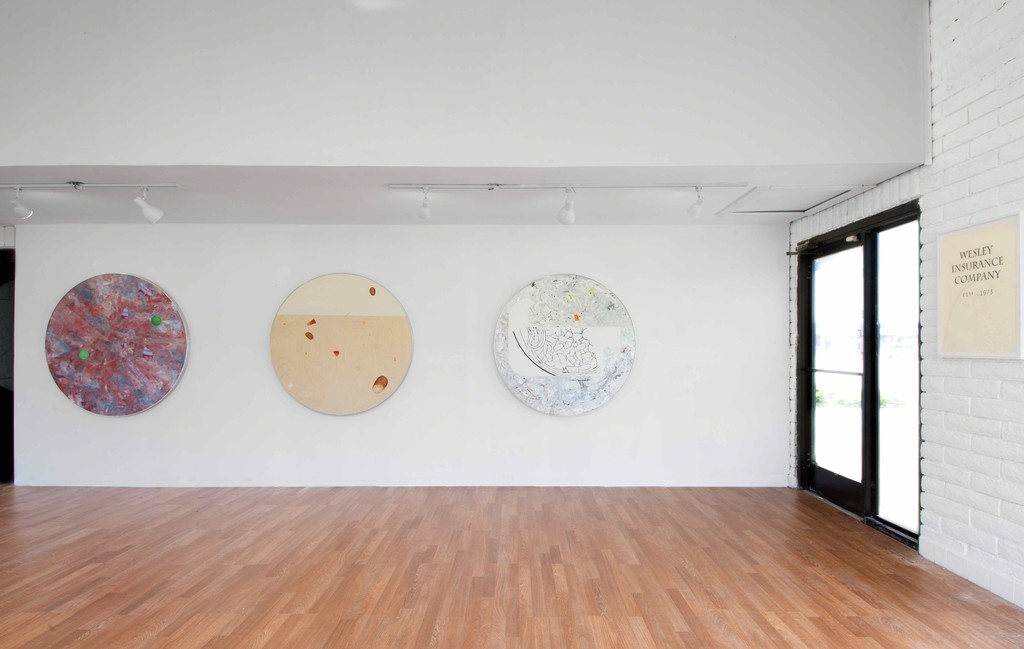 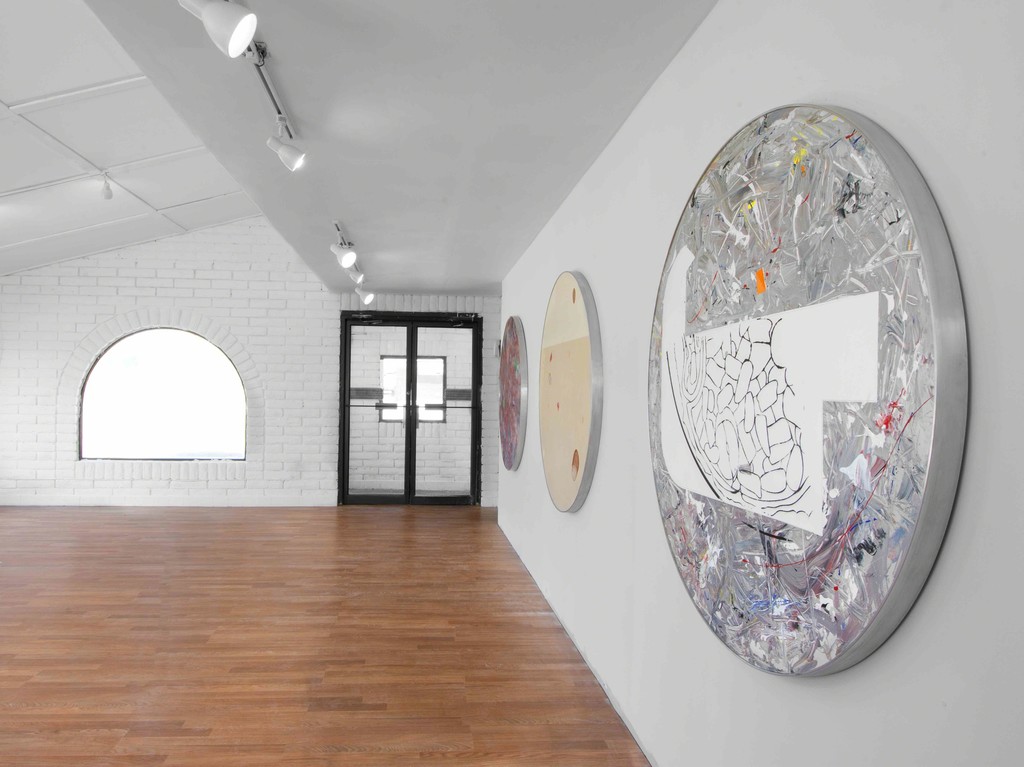 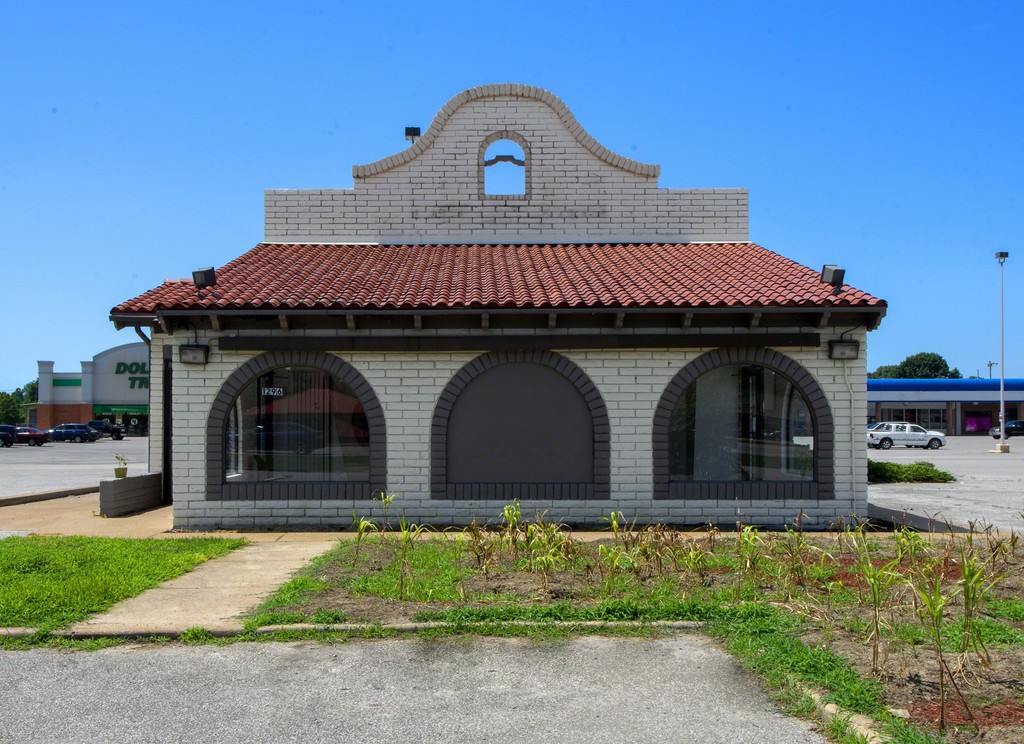 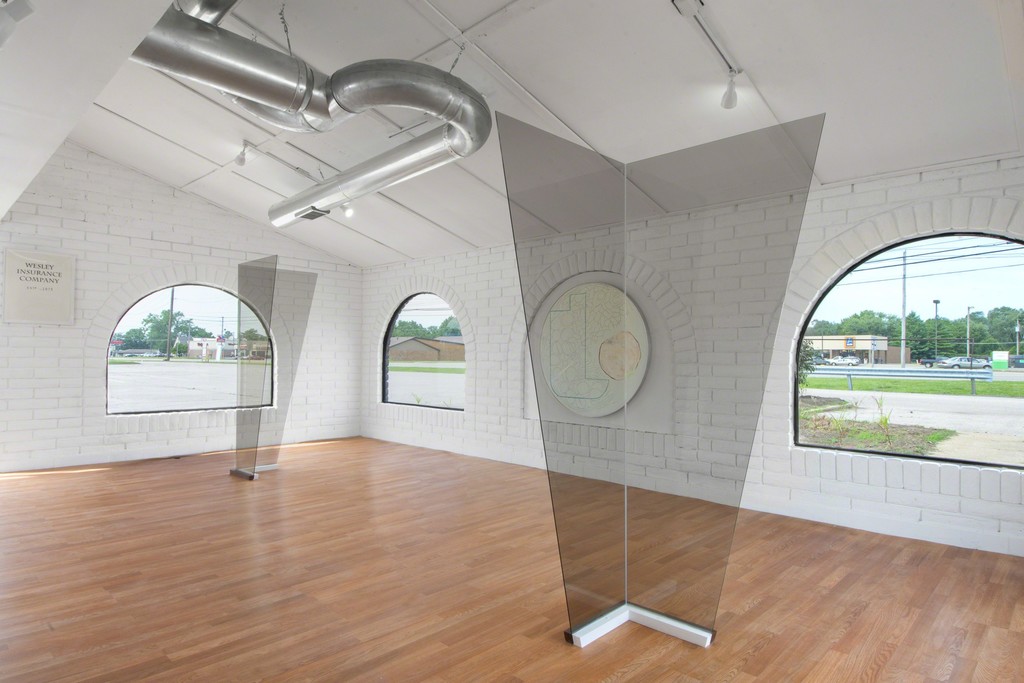 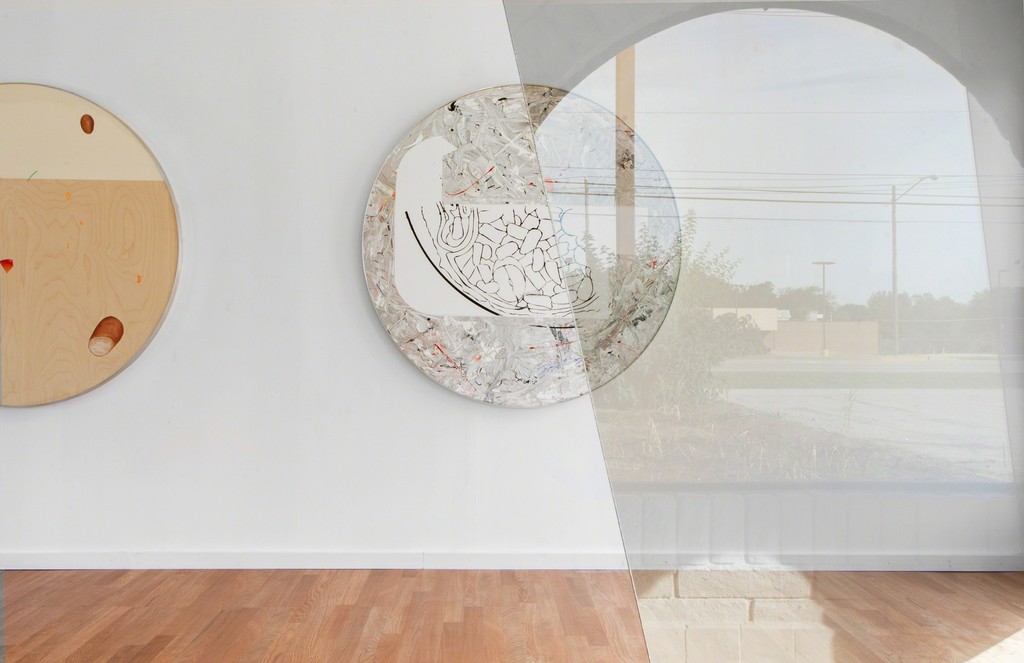 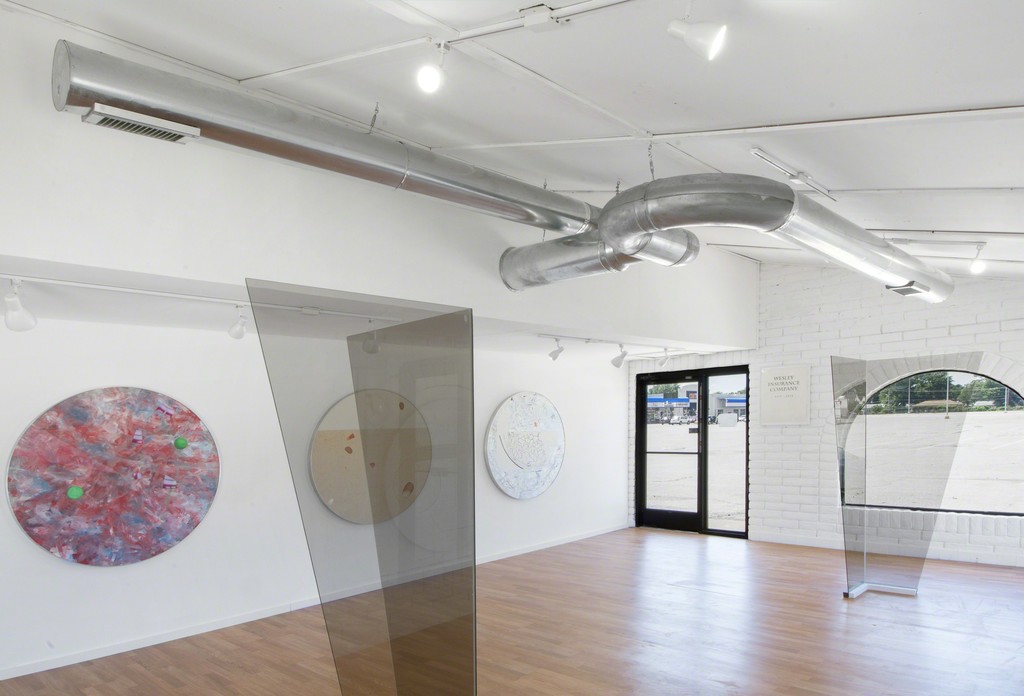 Bortolami is pleased to announce the inaugural exhibition of Eric Wesley / St. Louis, a yearlong evolving project, the second of the gallery’s Artist / City programming initiative. Wesley has converted a former Taco Bell restaurant in Cahokia, Illinois, replete with ersatz Spanish Colonial architecture, into “The Bell” which he will actively re-program throughout the year.

This inaugural exhibition features a suite of five new tondo paintings that riff on the cross-section of a burrito, a recurring motif in Wesley’s work. In 2000, the artist made a work titled Inch-Alota, a homonym of “enchilada”, which consisted of the production and consumption of an endless burrito. As one end was being consumed by the audience (and Wesley, himself), the other end was being continuously added to, an endless stretch of tortillas loaded with rice and beans. In this way, the burrito stands in for a meditation on and an engagement with the notion of infinity.

These five new “burrito paintings” use the phrase “con todo” (meaning “with everything”) as the mantra for production. Each painting uses the working line drawing of a stained glass window he made in 2015 as the formal starting point. From there, Wesley applies different painting techniques to these wood panels, employing various representational strategies to great effect. A pea and a bit of onion is represented in an painterly abstract void in one painting, while another painting features the footprint of the building, and another reimagines the burrito cross-section as a human brain.

After this initial painting exhibition, Wesley plans on programming the space with different projects throughout the year, including the planting of a vegetable patch or a maize maze, creating a sculpture garden on the roof of “The Bell,” and orchestrating a series of “happenings” with local amateur thespians.

Artist / City is a new, experimental alternative for artists to show their work in American cities outside the standard five-week gallery show. Pairing an artist with a space in a different city for a year, we hope to set forth a progressive exhibition structure, expand our programming, and grow geographically without opening full-scale operations. The aim is to create a structure in which our artists can investigate their work without restriction.

Eric Wesley (b. 1973, Los Angeles) lives and works in Los Angeles, and received his BA from University of California Los Angeles. Wesley has had solo exhibitions in galleries internationally as well as at MOCA, Los Angeles, Foundation Morra Greco, Naples, Italy, and most recently at 356 Mission Road in Los Angeles. Among others, Wesley’s work has been included in exhibitions at the Hammer Museum, Los Angeles; Musée d’Art Contemporain, Bordeaux; Fundación/Colección, Jumex, Mexico; Museo d’Arte, Benevento, Italy; the 2004 Whitney Biennial; The Prague Biennial; Institute of Contemporary Art, London; MoMA P.S.1, New York; and the Studio Museum in Harlem. He is one of the founders of Los Angeles’ Mountain School of Arts. Wesley will be the subject of a solo exhibition at Midway, Minneapolis in September.