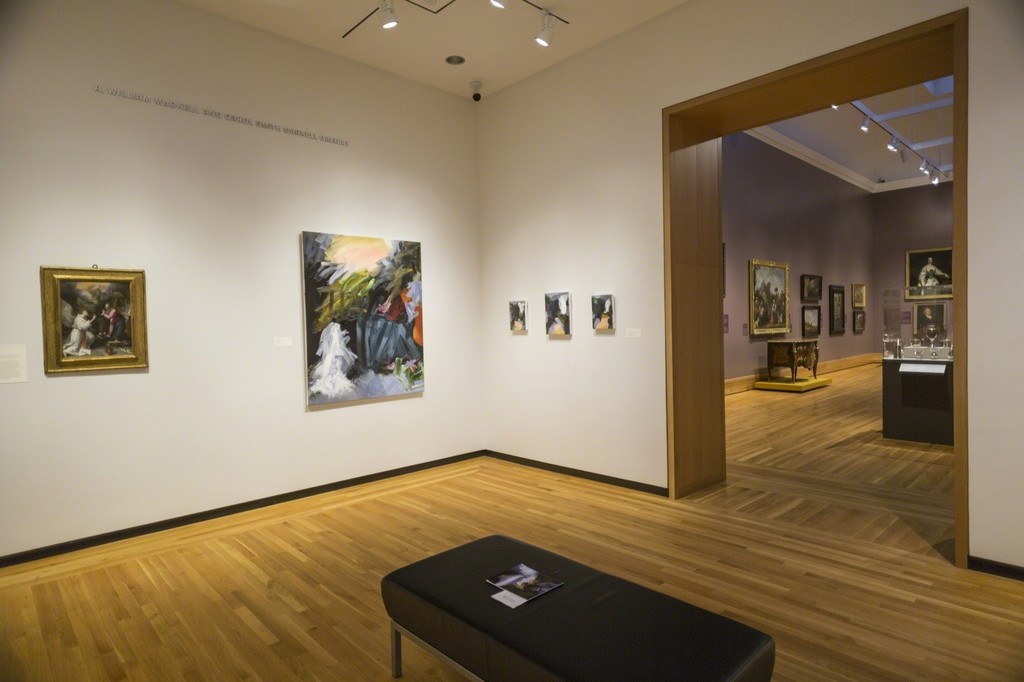 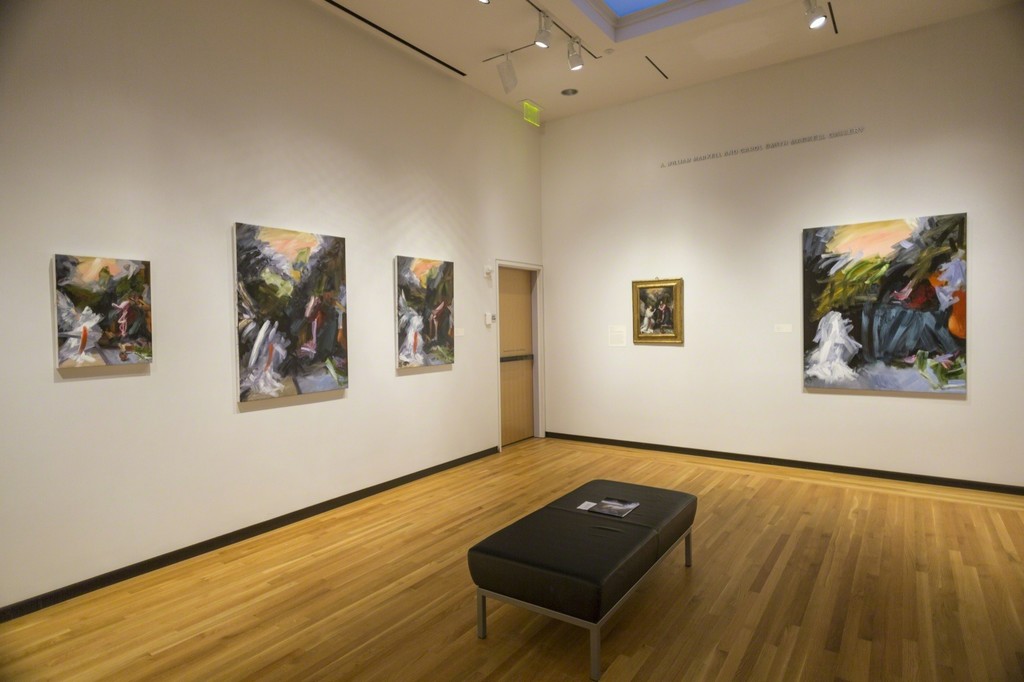 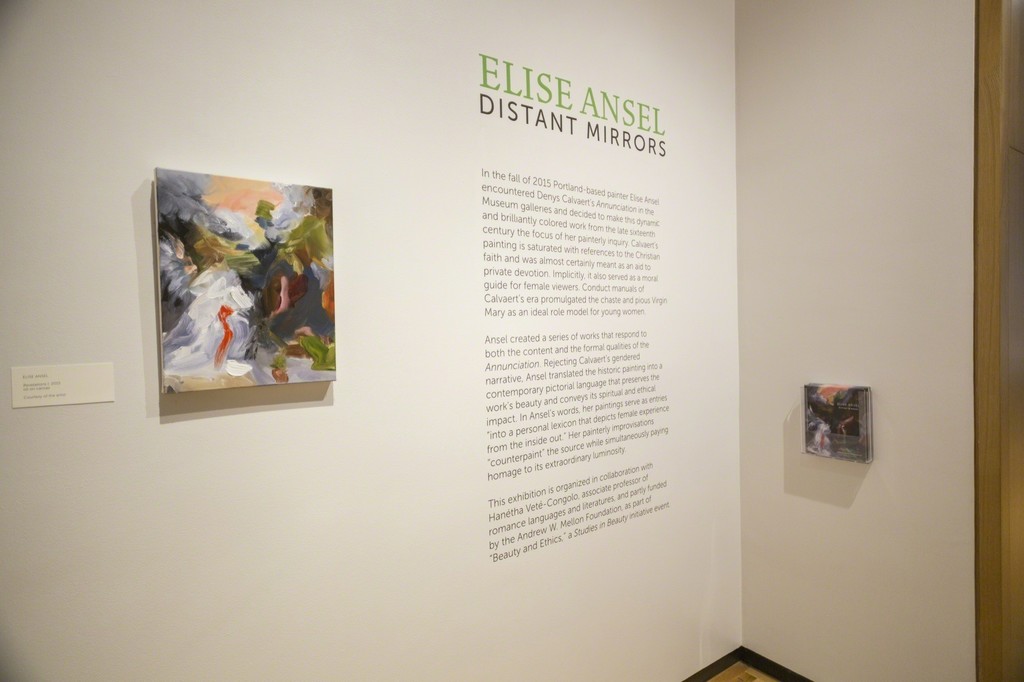 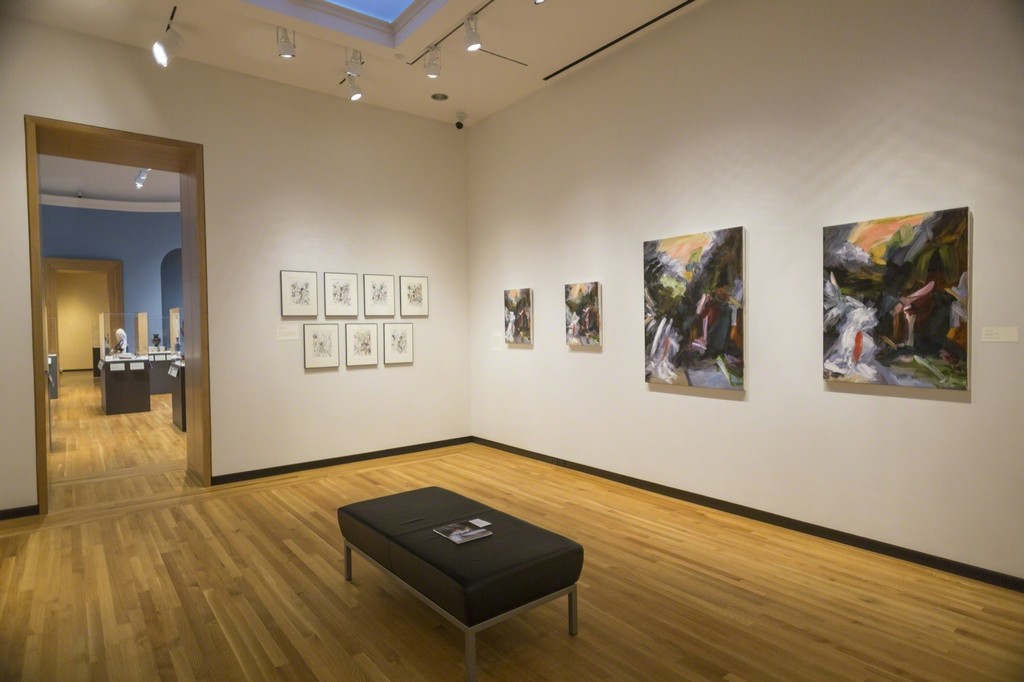 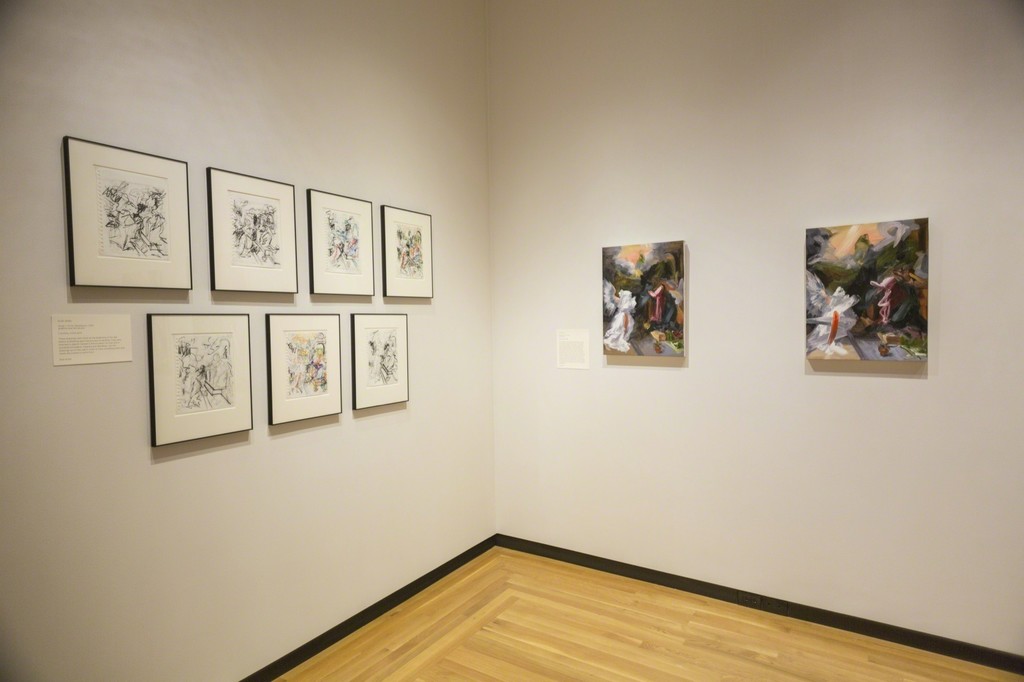 Elise Ansel: Distant Mirrors features a group of nine paintings and seven drawings by Portland-based artist Elise Ansel that she newly created for this exhibition. Ansel drew inspiration for the works from a late Renaissance devotional painting, Denys Calvaert’s Annunciation, ca. 1597, part of the Museum’s permanent collection. The special exhibition presents Ansel’s gestural, sumptuously colored, and highly personal works in the same gallery as Annunciation, offering audiences a dynamic visual dialogue between artists 500 years apart. Elise Ansel: Distant Mirrors celebrates the art of painting as a medium of expression past and present, and ignites questions about beauty and aesthetics, in relation to the politics of gender. The exhibition is on view in the BCMA’s Markell Gallery through April 17, 2016.

Ansel’s new series demonstrate a provocative response to the art of the past. Her approach encompasses an analysis of the Late Renaissance work’s formal composition, color harmonies, and spatial arrangements, which she reinterprets in her own drawings and paintings. Beginning with an exploratory drawing after her source, Ansel then identifies fresh ideas that she uses as a starting point for her work in oil on canvas. As the series of paintings, titled “Revelations,” illustrate, her paintings are fluid, improvisational, and abstract. By repeating the process over several weeks, Ansel becomes deeply familiar with her source painting. She understands the artist’s creative choices and critically reflects on them in her own work.

For Ansel, this profound engagement with work of the past enables her to define her own perspective as a contemporary woman artist. Within the context of a cultural practice that has traditionally been dominated by western, white male artists, Ansel’s creative responses to historic works pose questions of how women artists can establish themselves in that trajectory.

“Through spending significant time with Calvaert’s Annunciation, I became increasingly aware of the assumptions about gender roles that infuse this religious painting by a male artist who was steeped in the traditions of a patriarchal society,” said Ansel. “I found myself wondering how this scene would potentially have been interpreted and depicted differently from a woman’s perspective? And my intention with this series is to reclaim what’s beautiful, while reworking— translating into a contemporary lexicon—that which is sexist, classist, and racist.” The resulting artworks are meant as homage to Calvaert as much as a counterargument.

Elise Ansel’s ongoing consideration of the ethical implications of the western art historical canon attracted the attention of Hanétha Vété-Congolo, Bowdoin College Associate Professor of Romance Languages and Literatures, who initiated and co-organized this exhibition with BCMA curator Joachim Homann. Vété-Congolo proposed the exhibition as part of “Beauty and Ethics,” a Studies in Beauty initiative event, funded by the Andrew W. Mellon Foundation. Vété-Congolo, a poet, writer, and scholar of Caribbean and Francophone literature and literary theory, recognized parallels between Ansel’s process of artistic inquiry and her own investigation of the exchange of diverse perspectives in post-colonial literature.

Vété-Congolo says, “In our current conflict-ridden world, Ansel’s thoughts as manifested by her art production process and concrete body of painting, singularized by unpredictability and life- giving colors, are as relevant as they are revivifying.” And this sentiment is shared by, and indeed compellingly visualized in the work of Elise Ansel, who is undeterred in her appreciation of historic art: “I am positing that these old paintings have something to contribute to us now.”