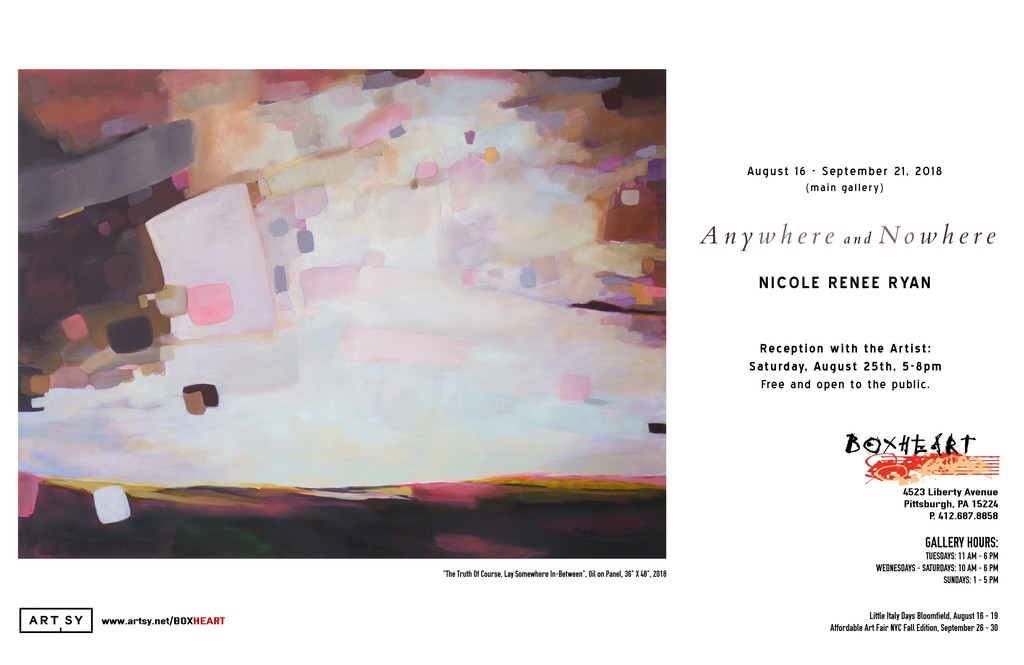 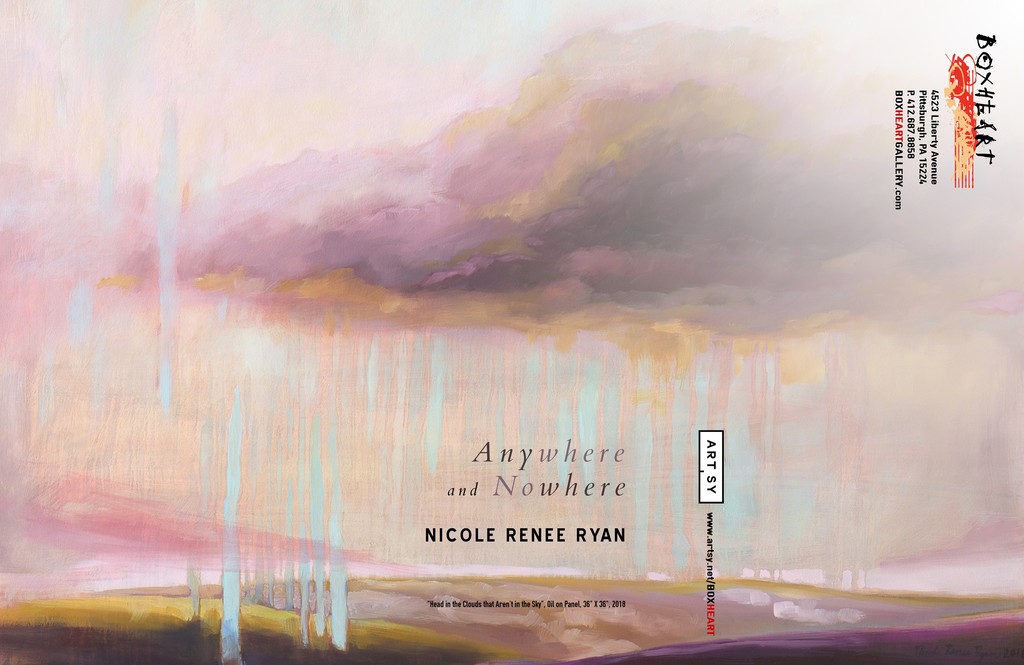 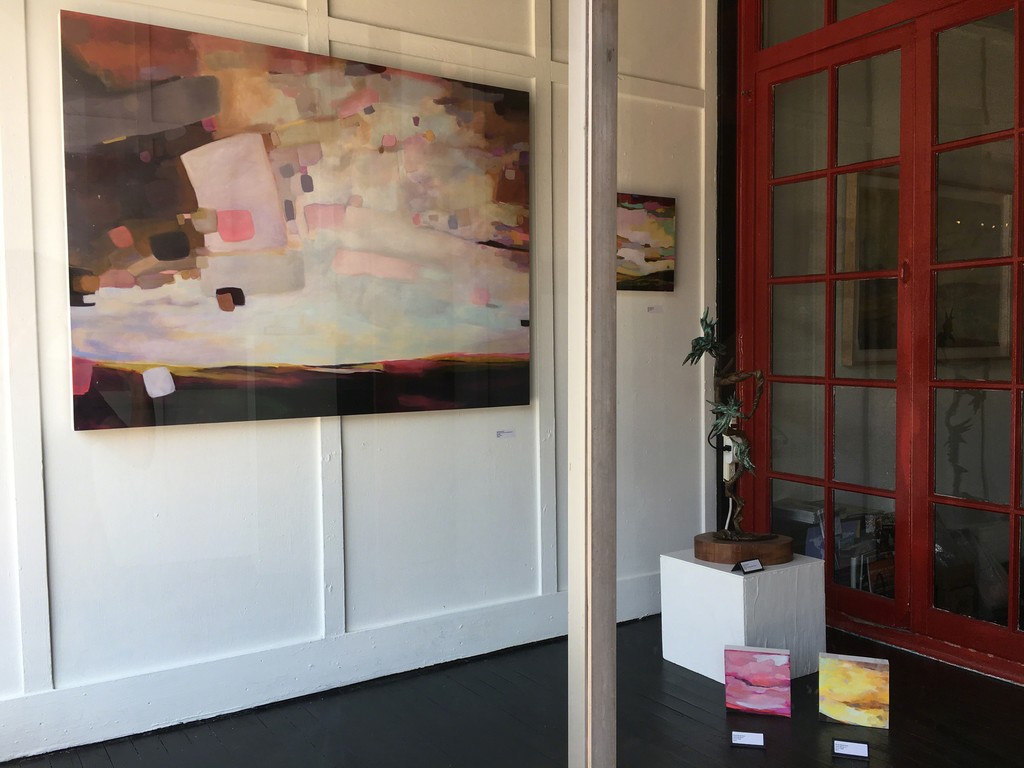 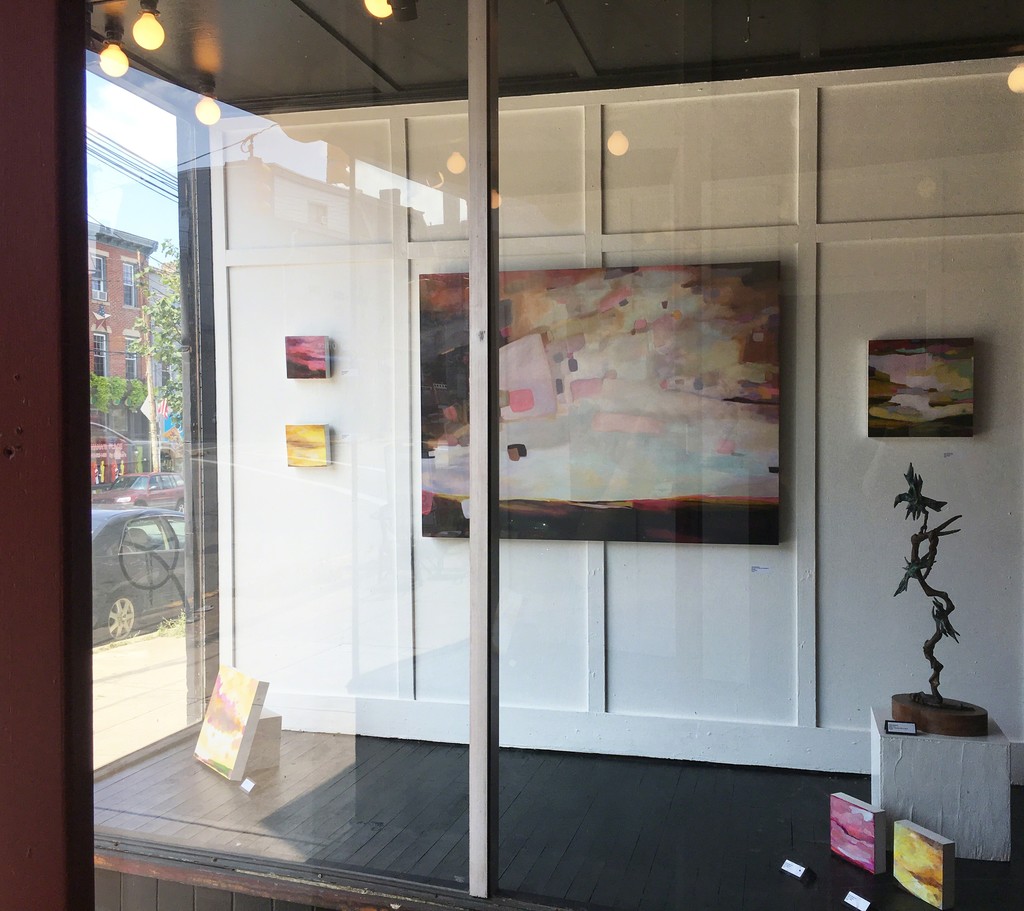 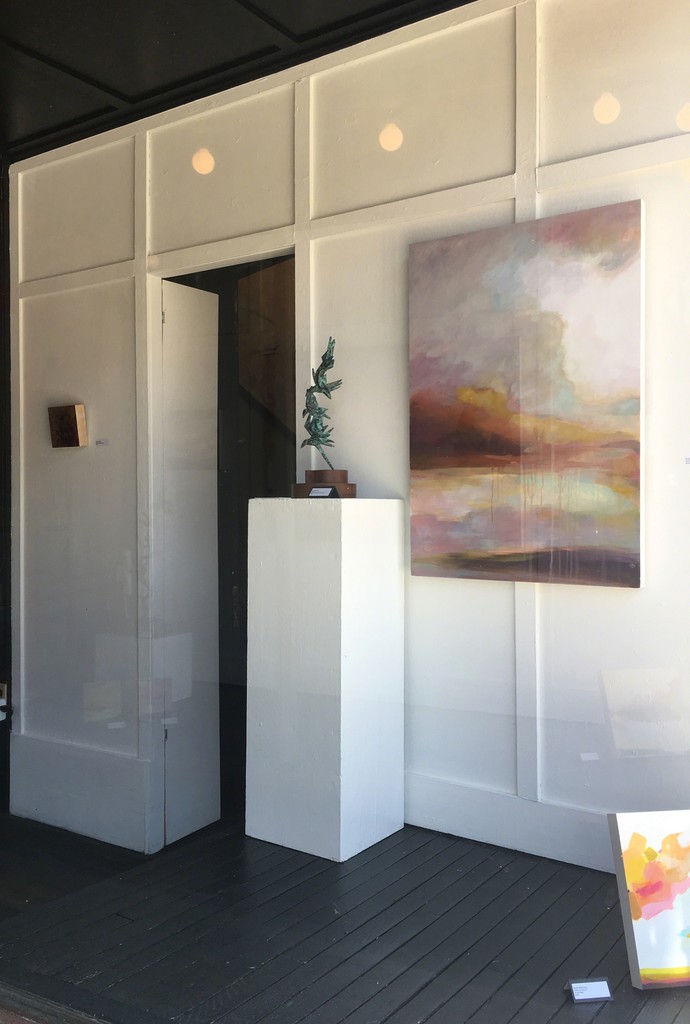 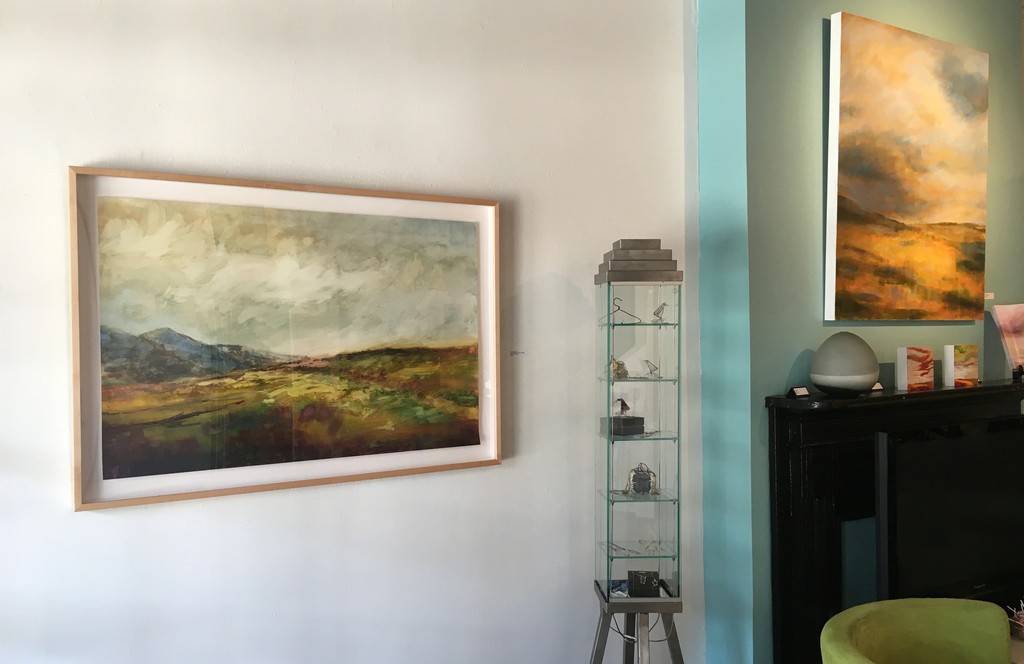 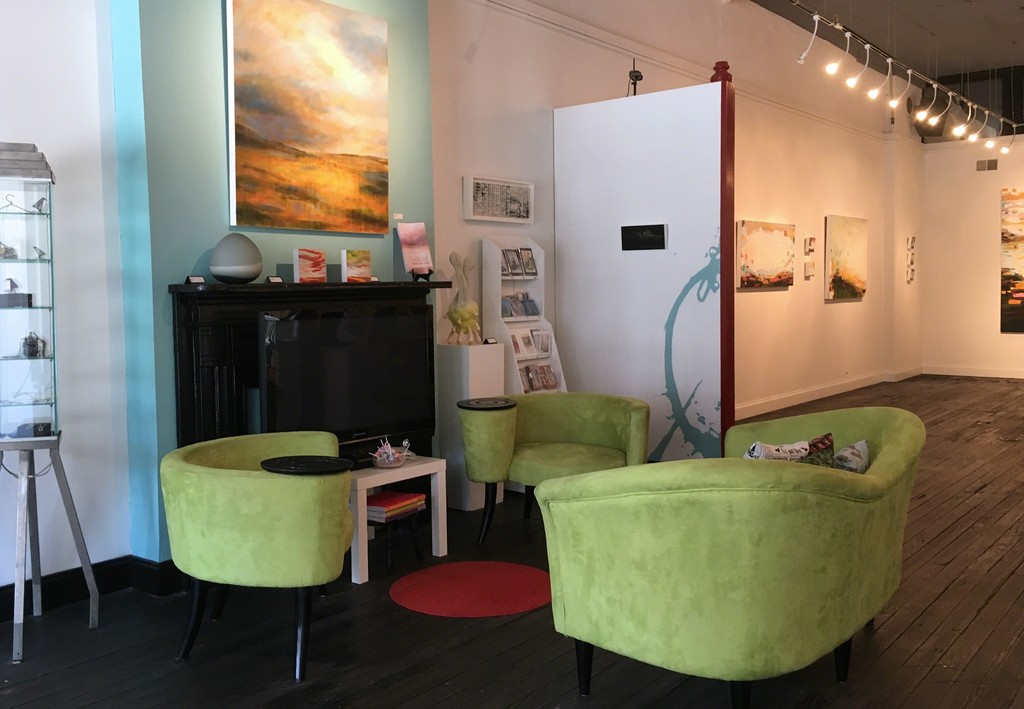 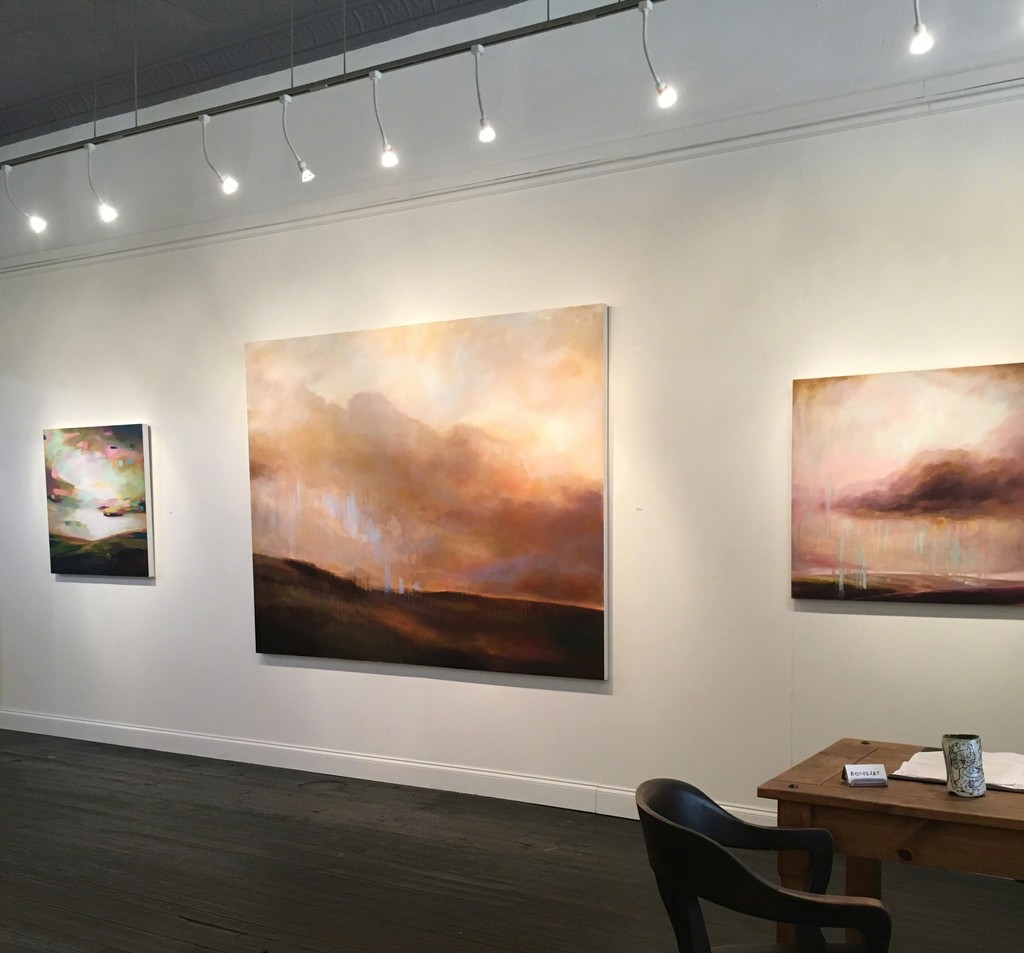 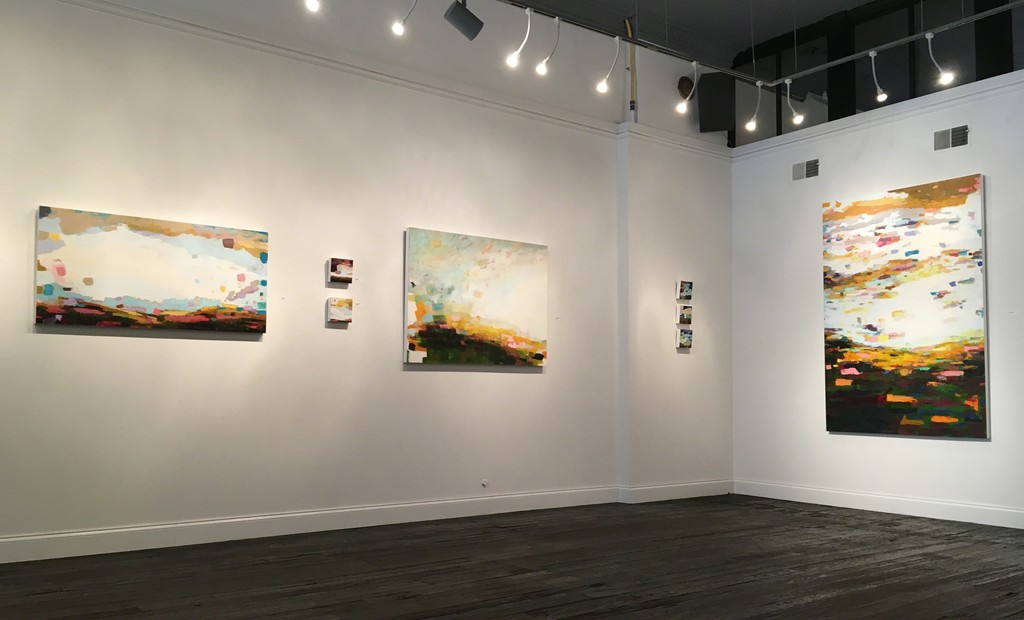 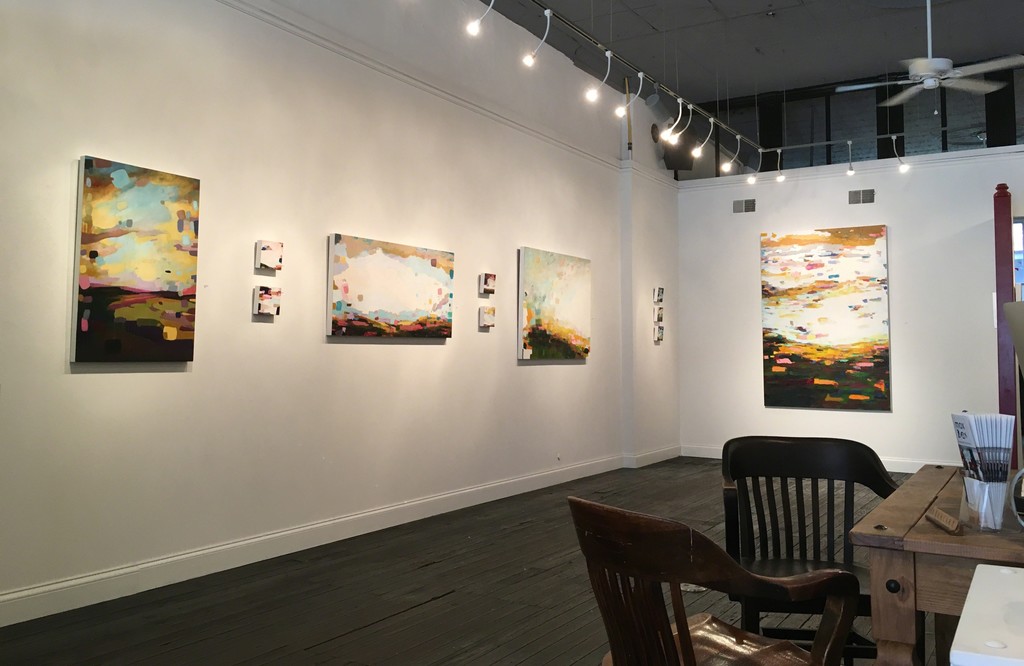 From August 16th through September 21st, BoxHeart Gallery is proud to present Nicole Renee Ryan: Anywhere and Nowhere on exhibit in our main gallery. Ryan paints distant landscapes based on her memories of memories. Things remembered and things forgotten, emotionally charged ambiguous imagery, are represented by half realistic and half abstract shapes in vivid color - things real and things unreal.

Organized by Nicole Capozzi and Joshua Hogan, owners of BoxHeart Gallery, the paintings selected for Anywhere and Nowhere capture Ryan’s overly romantic or tragic interpretation of the natural world. Her painted worlds are defined as much by what is missing as by what is present.

Ryan blurs out details, preferring her audience fill in their own, imagining themselves in her soft, unfocused painted subjects. She wants the suggested history of her image to feel like the viewer's history. Her landscapes shift and become their own active subject. They play, move, and break away, allowing imagination to enter and complete the almost lost memory. She uses shape, line, texture, and color to strip away reality and suggest a feeling of magic and other-worldliness in ordinary places. Ryan's ethereal landscapes dance between reality and abstraction and memory and imagination.

A contemporary watercolorist, oil painter, and muralist from Mercer PA, Ryan attended Washington and Jefferson College and graduated cum laude with a BA in Psychology and a minor in Professional Writing. She has been awarded a residency at the New York Student’s League at Vytacil, a fellowship at VCCA, and was nominated for Pittsburgh's 2016 "Emerging Artist of the Year" by the Pittsburgh Center for the Arts. She was also featured in the newly released book of watercolors, Splash 15: Texture, by North Light Books. Most recently, her artwork has been exhibited at Superfine! Art Fair NYC, Architectural Digest NYC, Gallery Oh! Chicago, Pittsburgh Center for the Arts, Chautauqua Institute of Art NY, and the Heinz History Museum in Pittsburgh. BoxHeart will also exhibit her paintings at the Affordable Art Fair in New York City this fall.

Nicole Renee Ryan: Anywhere and Nowhere will be on exhibit from August 16th through September 21st in BoxHeart’s main gallery. The exhibition coincides with our 2nd floor exhibit, Augustina Droze: Puja. The reception with the artists will be held Saturday, August 25th from 5 - 8 pm.