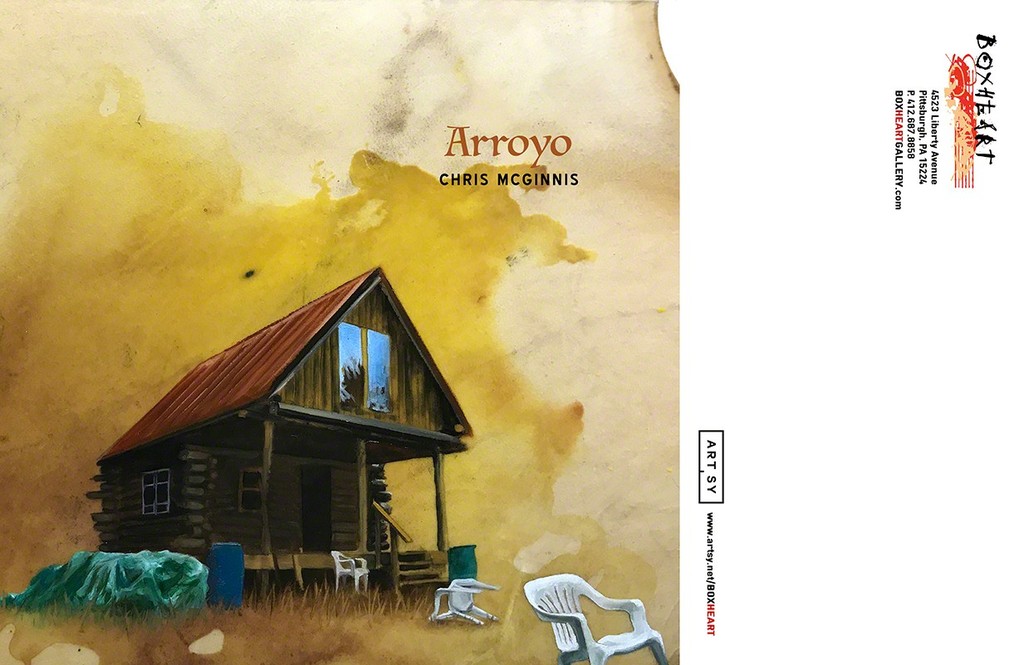 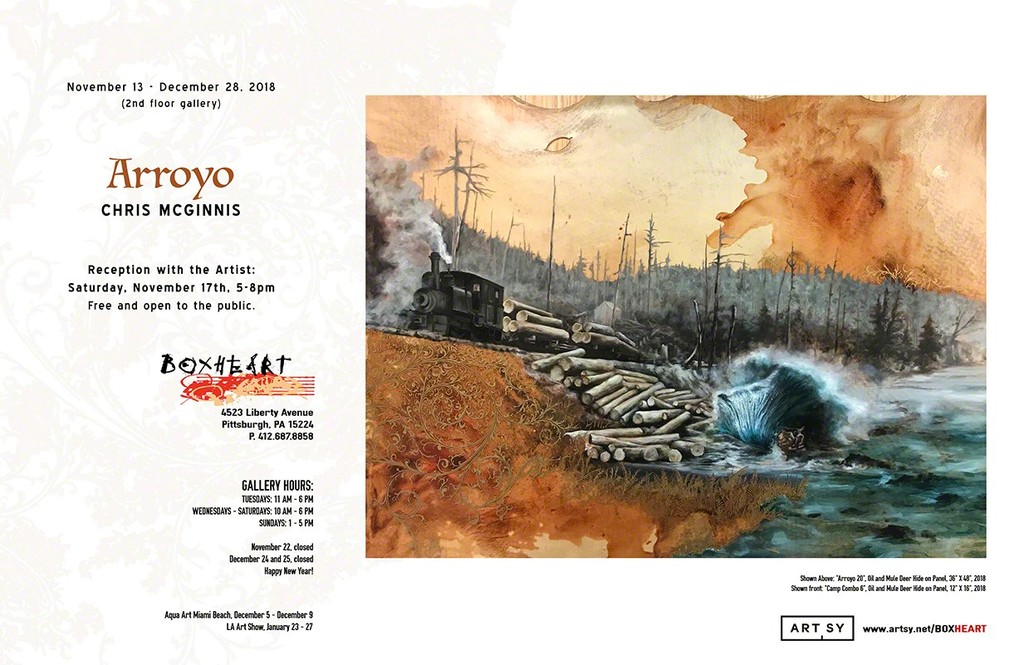 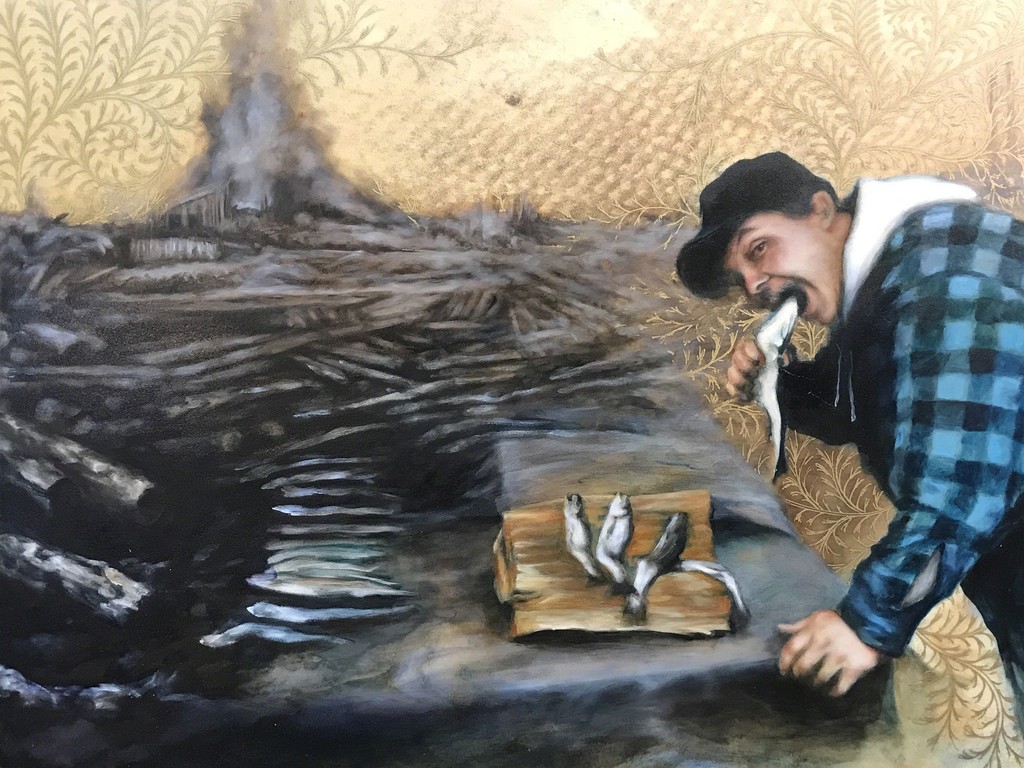 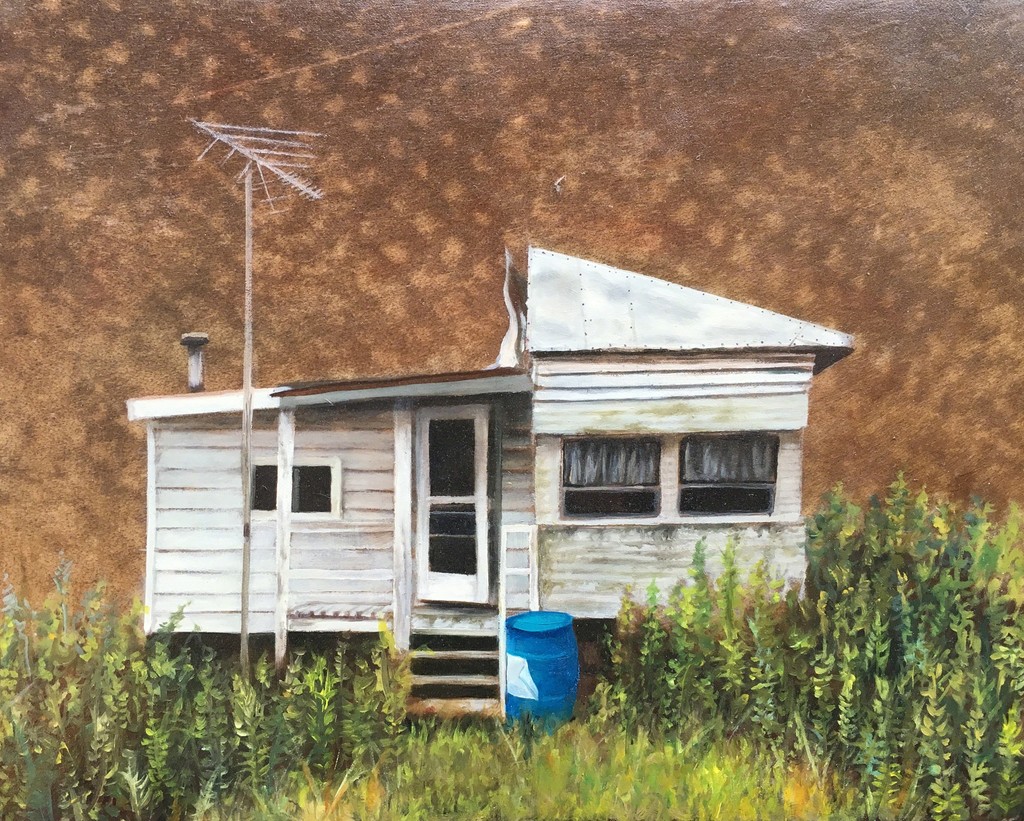 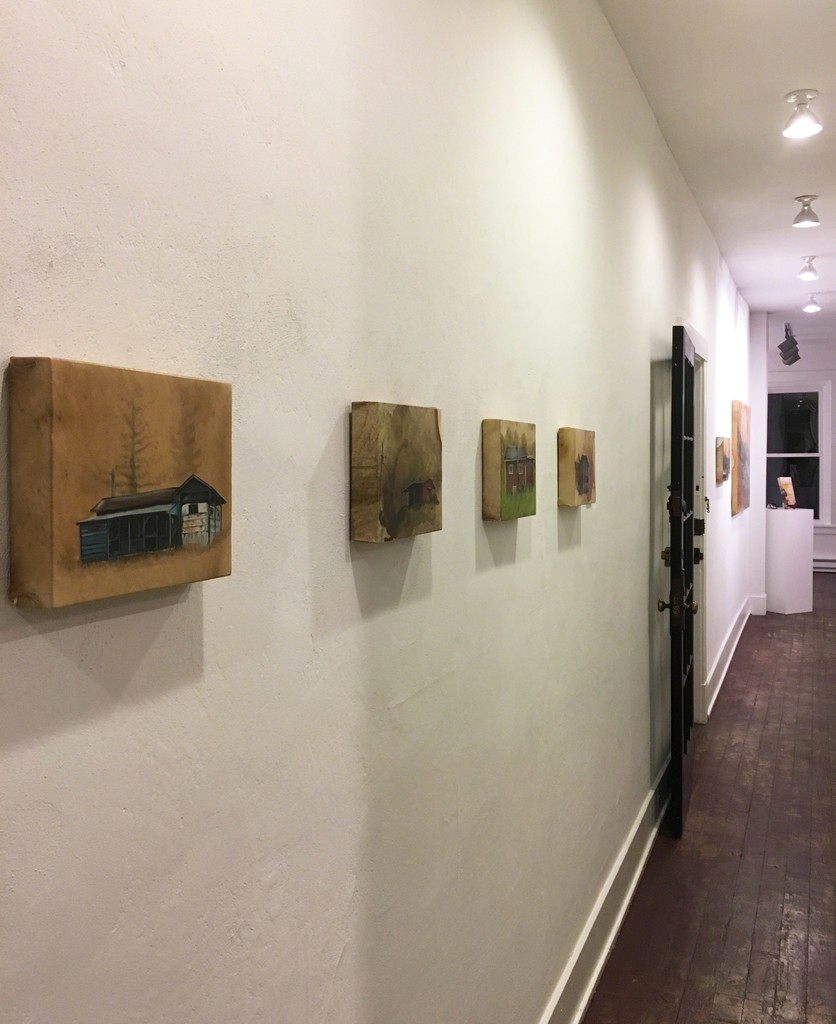 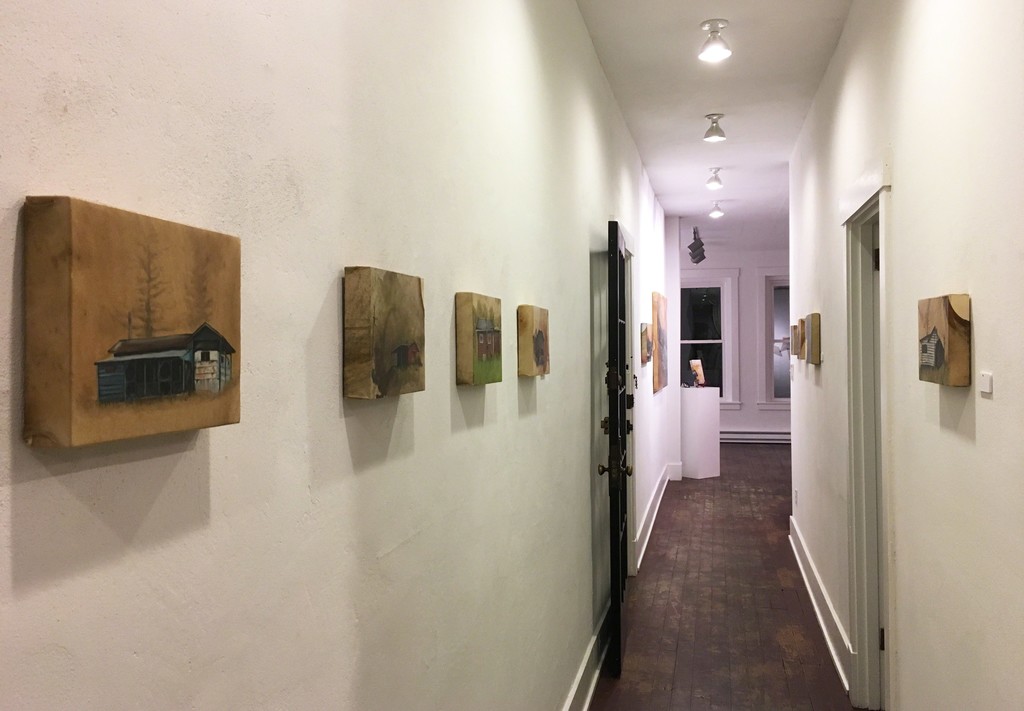 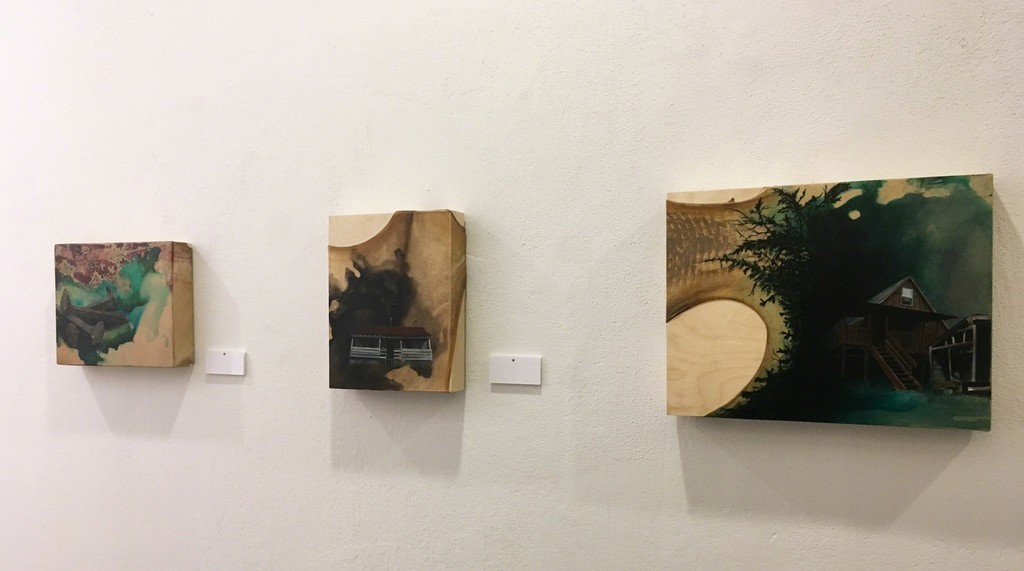 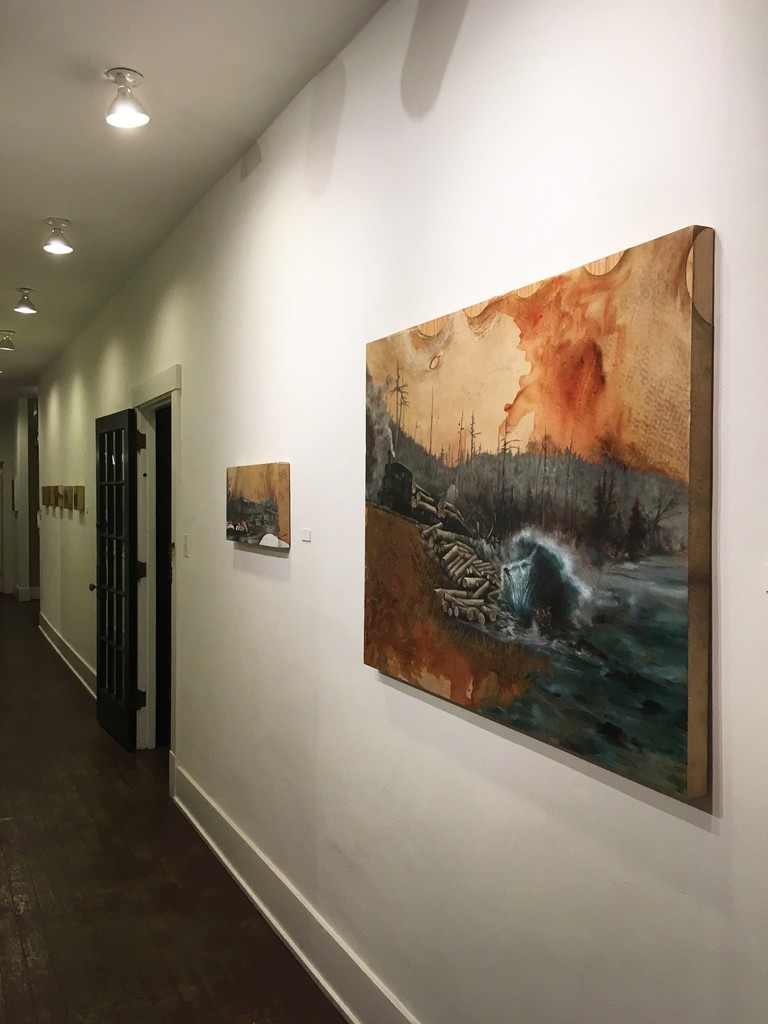 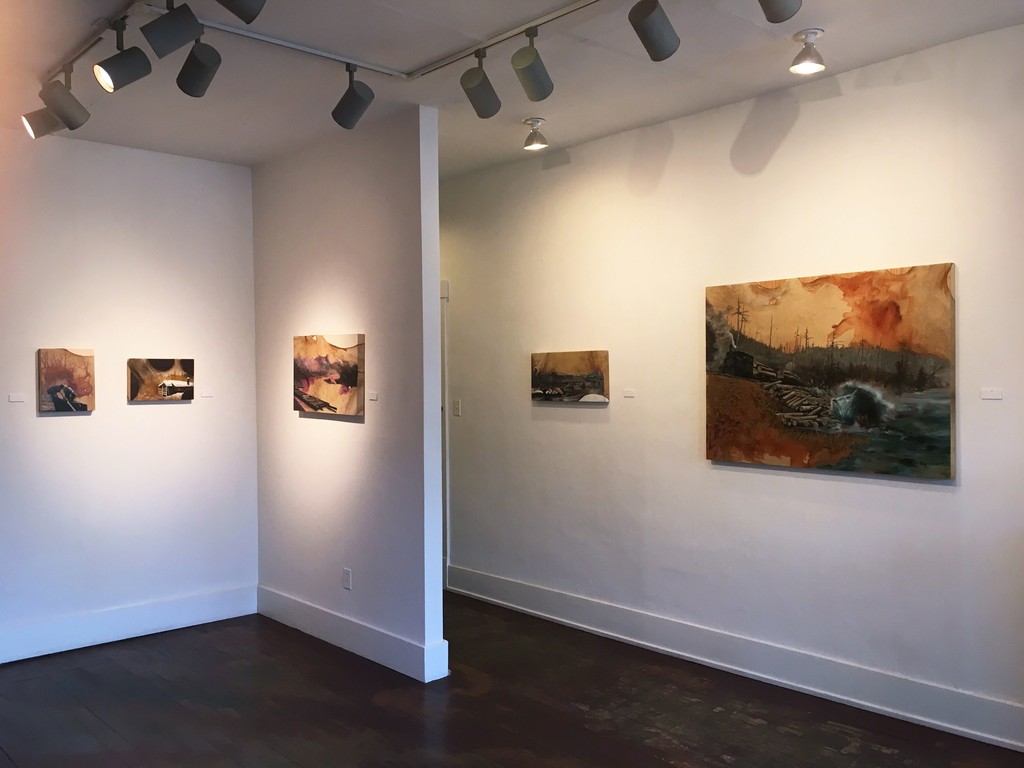 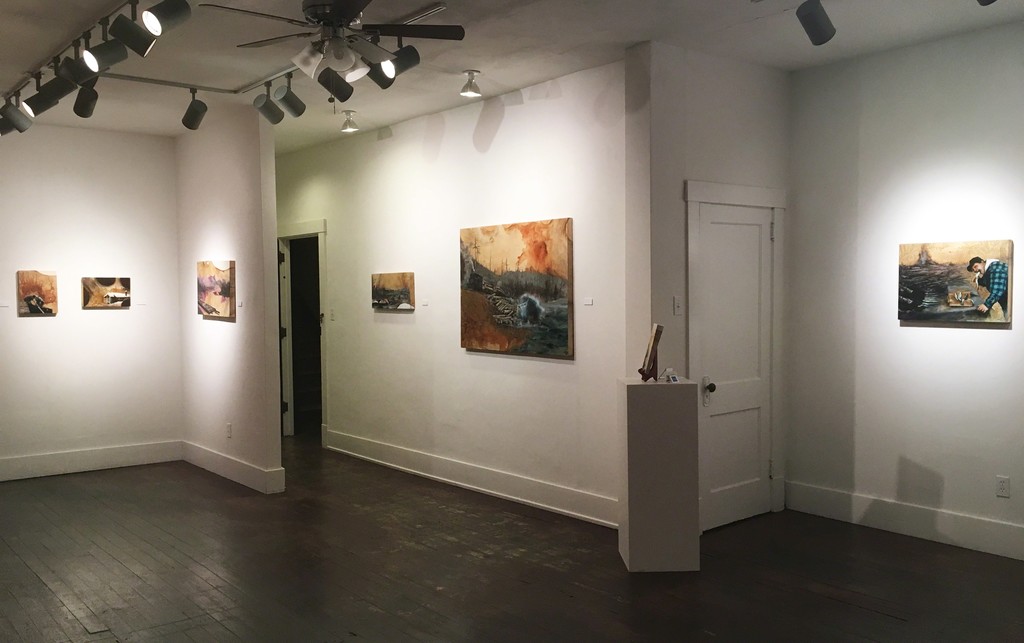 From November 13th to December 28th, BoxHeart Gallery is proud to present Chris McGinnis: Arroyo on exhibit in our 2nd floor gallery. McGinnis’ artwork is rooted in site-based research exploring notions of human progress and identity through place. This body of artwork specifically investigates his relationship with Arroyo, a lumber town in western Pennsylvania with an extensive hide tanning industry.

Organized by Nicole Capozzi and Joshua Hogan, owners of BoxHeart Gallery, Chris McGinnis: Arroyo critiques the pursuit of progress through a variety of lenses from technology and social economics to cultural identity and personal experience.

As a child McGinnis developed romantic notions of America’s industrial past that were typified for him, by the ruins of a 19th century tannery located in Arroyo near his family cabin in Elk County Pennsylvania. Now hidden amongst the dense overgrowth, these ruins were the backdrops for his childhood reveries and continue to inform his research. Like an effigy to the impermanence of progress, rectangular mounds of dirt and moss now supplant the solid railroad ties that once transported hides to and from that tannery. McGinnis remembers searching with his siblings for the gnarled iron spikes still embedded in those mounds.

Chris McGinnis: Arroyo will feature approximately 30 paintings on mule deer hide. The hide has a very attractive surface quality that accepts oil paint easily with limited preparation. Comprised of minute follicle details as well as larger variations in tone and texture, using this surface provides many opportunities to interact with the unique characteristics of each hide. Some have a visible "waffle" texture that was created by the drying racks while others are more pristine with only subtle shifts in warmth of surface. The hides are stretched over oak wood panels that are often left partially exposed in order to draw attention to the relationship between the tanning and timber industry throughout Arroyo's history.

Arroyo remains a place intimately connected to the natural world that surrounds it. At once a natural and industrial resource, a place for recreation and escape, and a quite beautiful sanctuary cursed by the allure of American landscape nationalism. It is a place and an idea that has come to mean different things to many different people. Chris McGinnis: Arroyo archives the interaction of memories connected with Arroyo in an effort to influence the composition and character of societal memory.

McGinnis is an artist, curator, and educator working in Pittsburgh Pennsylvania. He has exhibited extensively nationally and internationally, with over ten solo exhibitions and over 40 group exhibitions in recent years. McGinnis has created projects for the Westmoreland Museum of American Art, Urban Institute of Contemporary Art, the Pittsburgh Center for the Arts, and The Rivers of Steel Heritage Corporation. His artwork has been published in the National Studio Visit Magazine, European Art Magazine, Manifest’s International Painting Annual as well as numerous local and university publications including Pittsburgh’s Post-Gazette and The Tribune Review. McGinnis has worked for institutions across the country including Carnegie Mellon University, The University of Arizona, and Indiana University of Pennsylvania where he served as Director of the University’s Kipp Gallery from 2011 - 2016. He is currently Founding Director and Chief Curator for Rivers of Steel Arts a division of the Rivers of Steel Heritage Area and he is co-founder of Alloy Pittsburgh a site-based art project and research laboratory developed for the Carrie Furnaces National Historic Landmark.

Reception with the Artist
Chris McGinnis: Arroyo will be on exhibit from November 13th through December 28th in BoxHeart’s 2nd floor gallery. The exhibition coincides with our main gallery exhibit, Nichole Gronvold Roller: Above Ground. The reception with the artists will be held Saturday, November 17th from 5 - 8 pm.