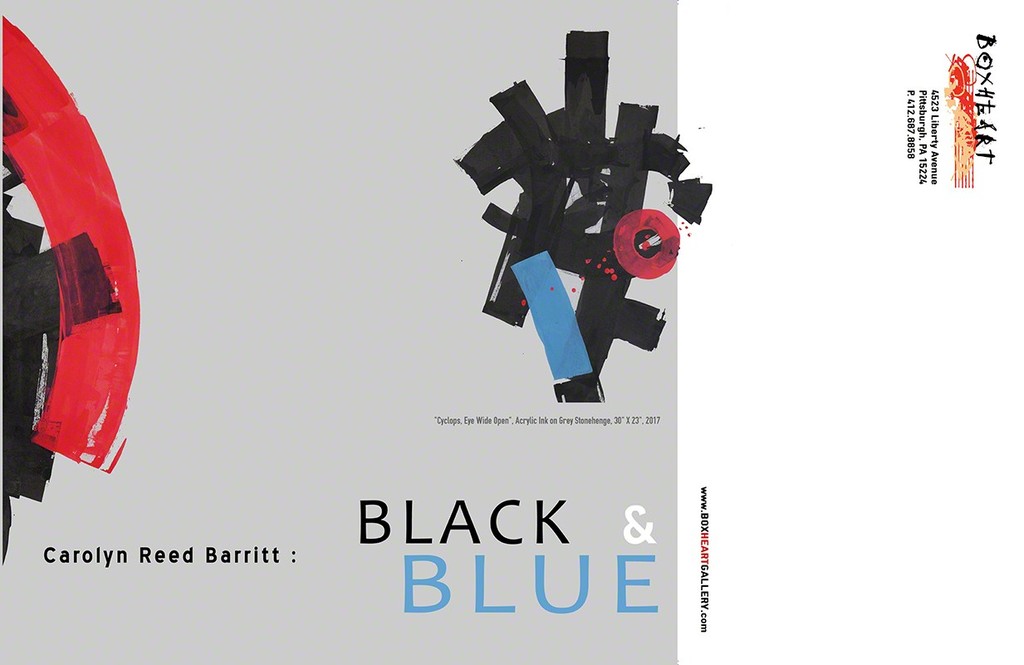 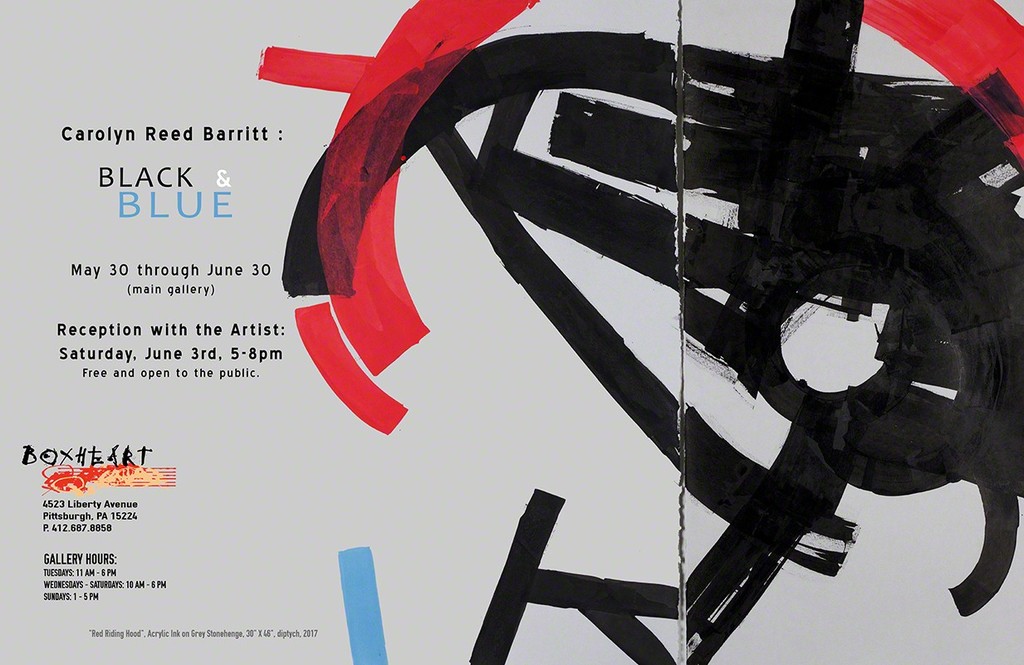 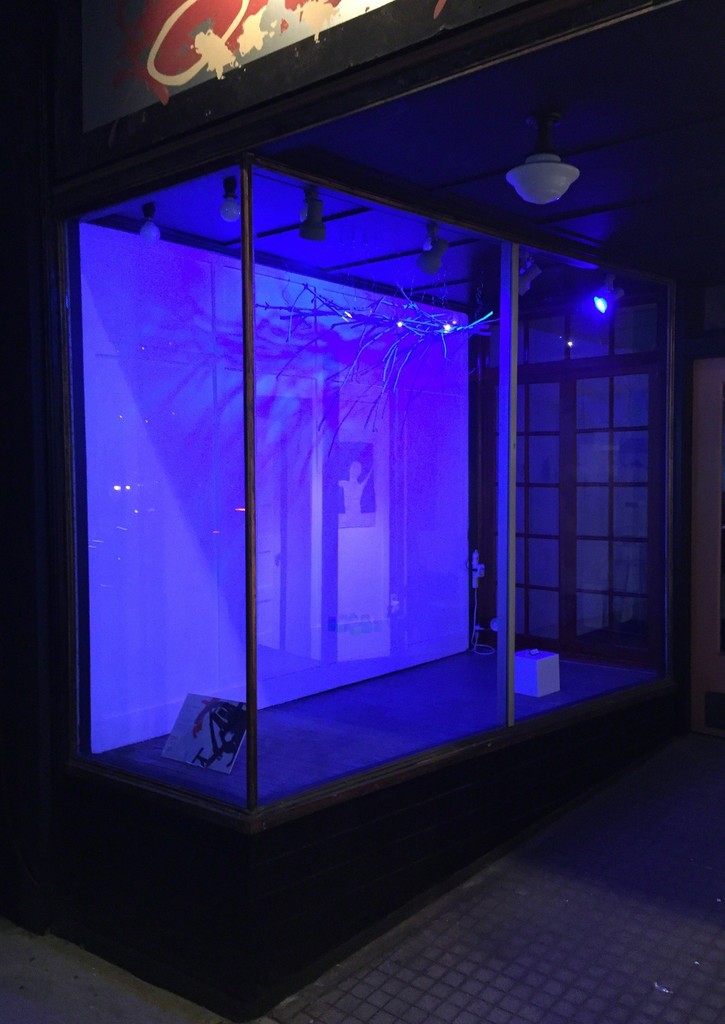 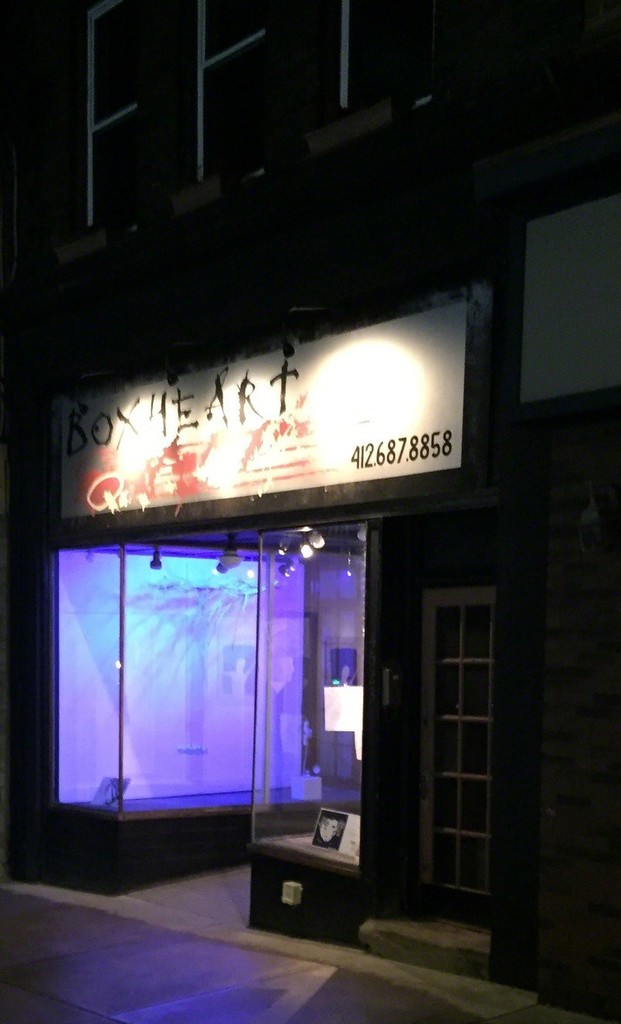 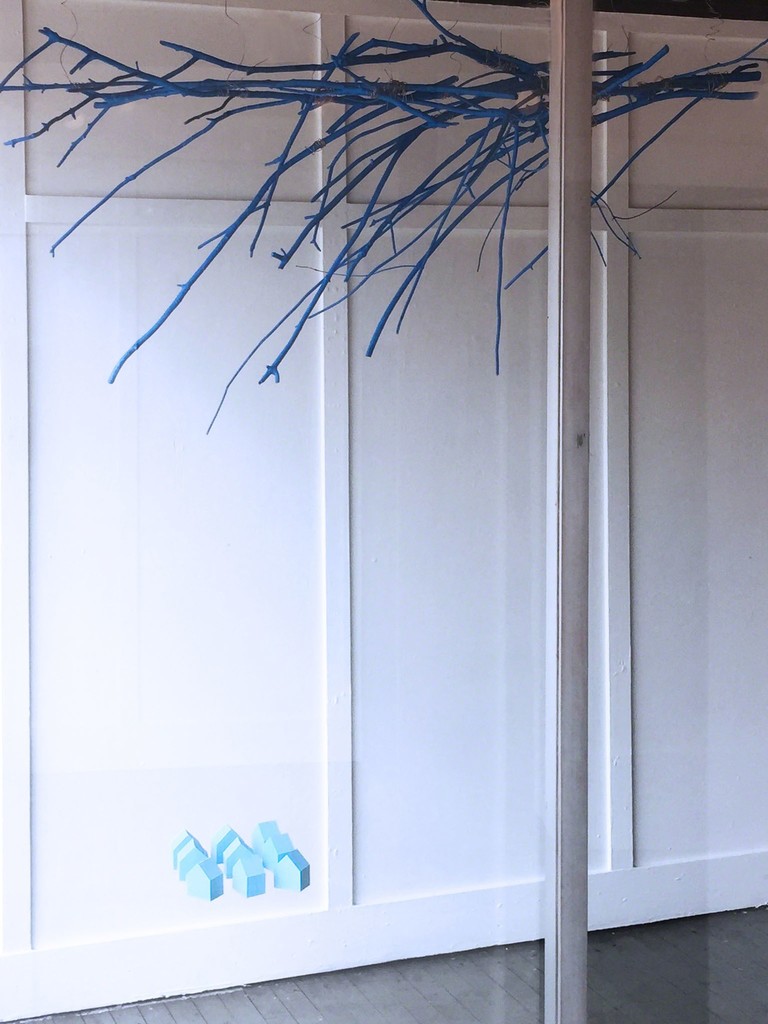 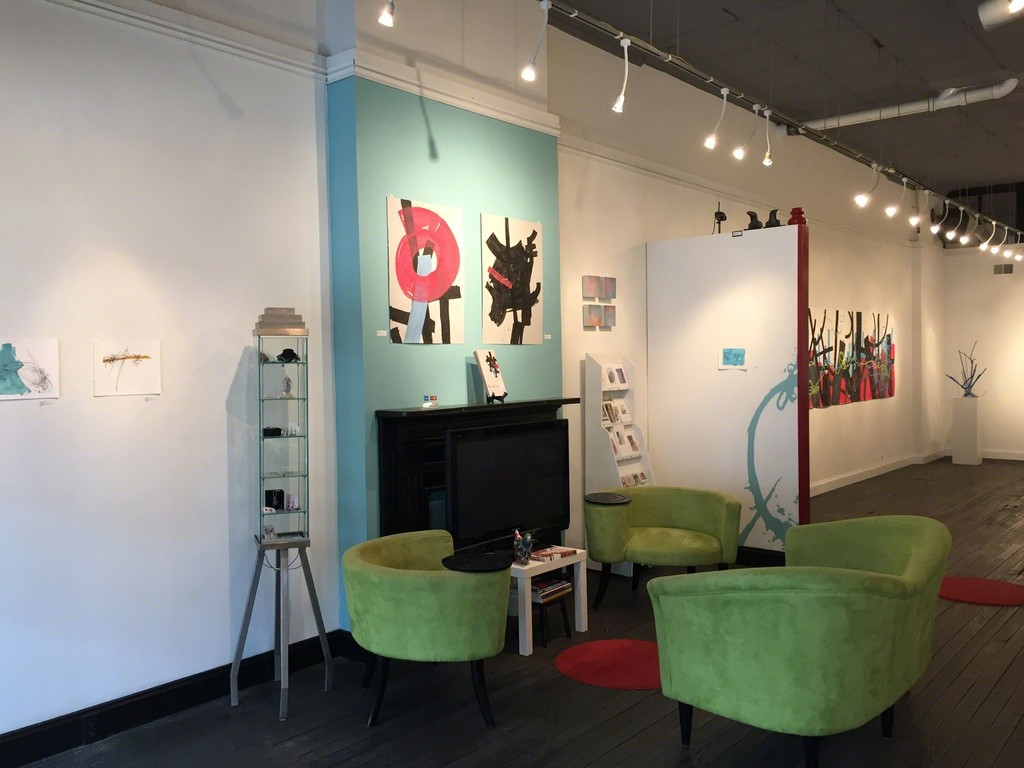 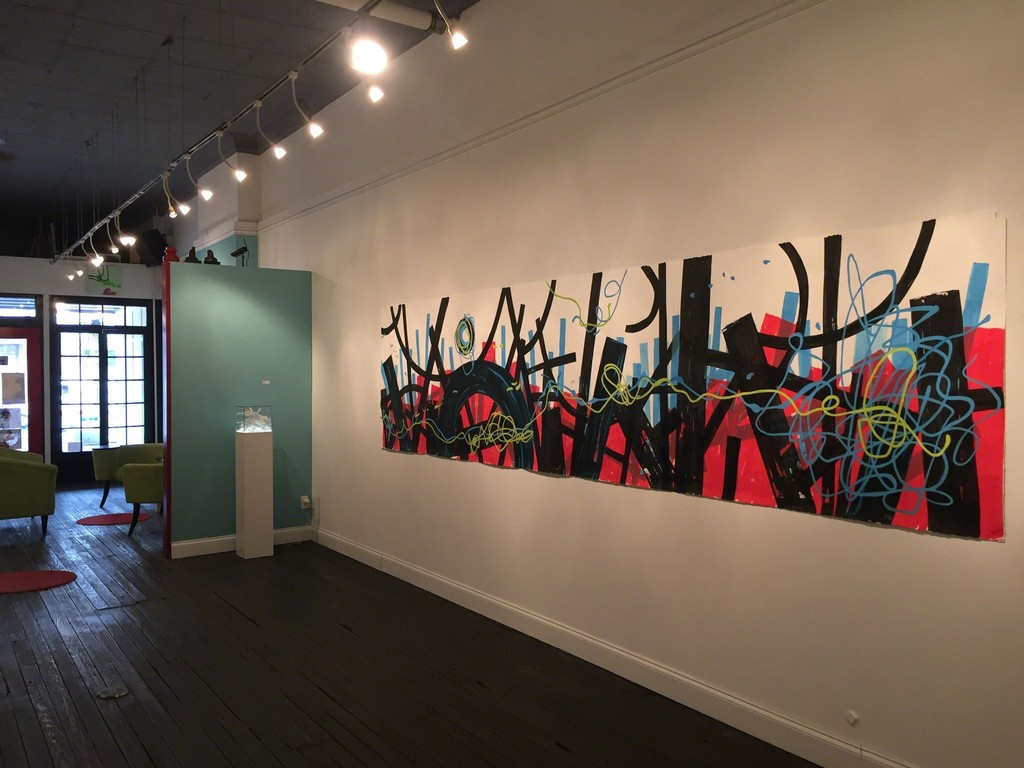 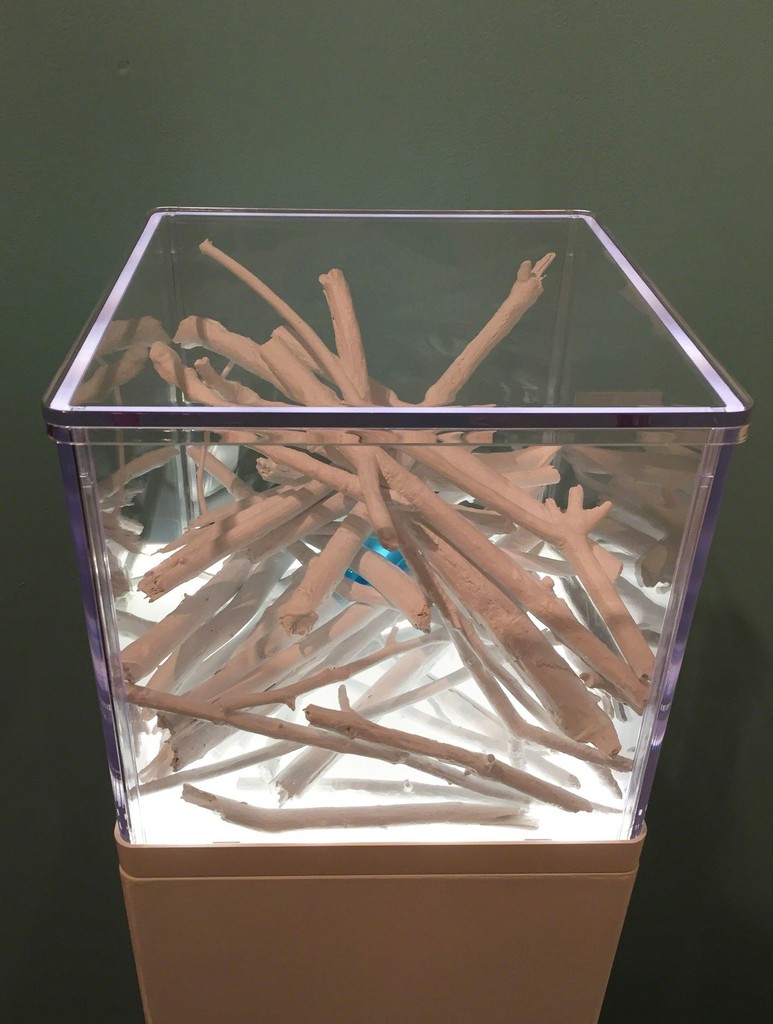 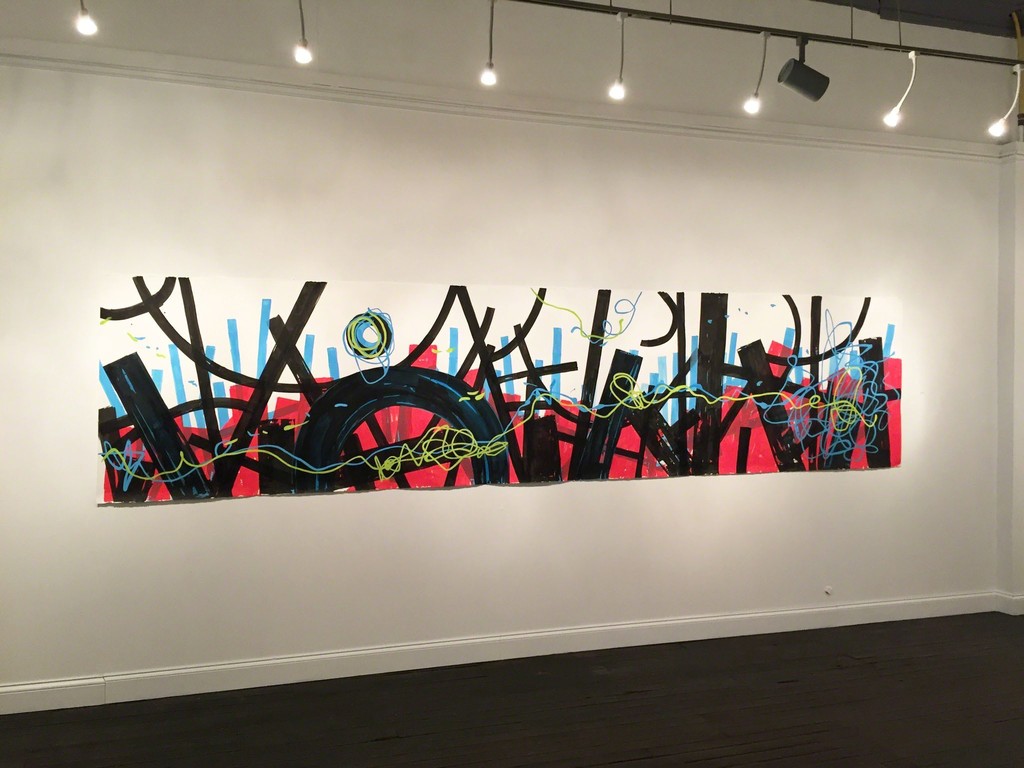 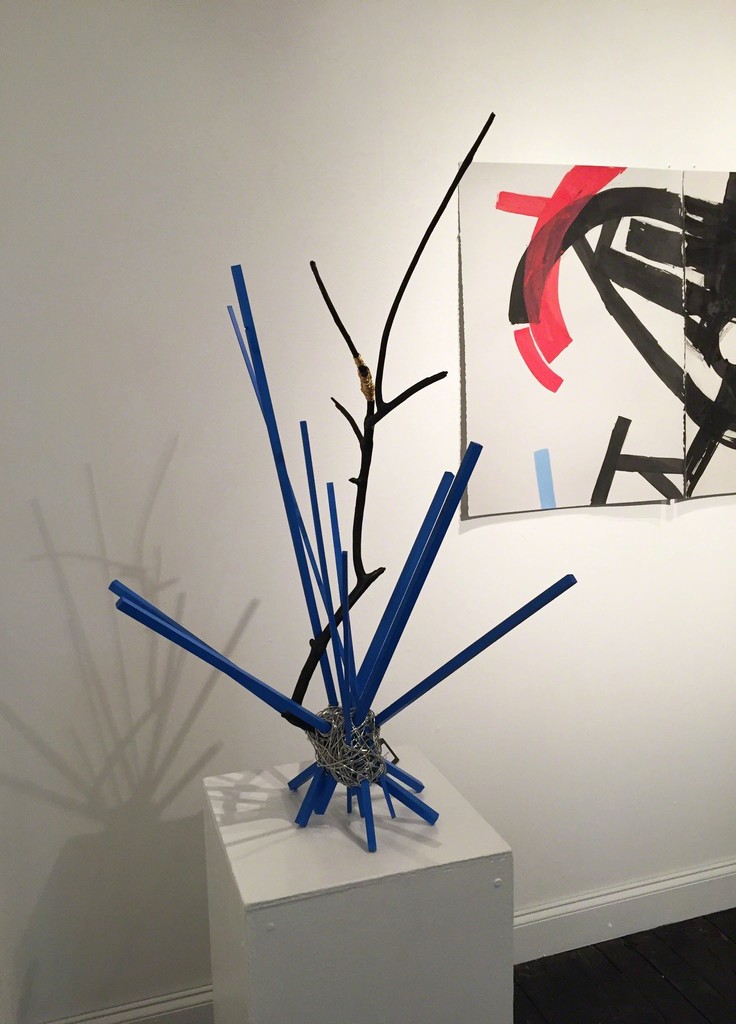 From May 30th through June 30th, BoxHeart Gallery presents Carolyn Reed Barritt: Black & Blue on exhibit in our main gallery. Through line, shape and structure, the artwork presented in Carolyn Reed Barritt: Black & Blue investigates character and place, creating narratives and identities that often affect each other. With art that fluctuates between painting, drawing, and sculpture, Barritt combines disparate, yet individually familiar elements to form new, off-balance realities. Her abstracted depictions and landscapes are created with marks made from ink, markers, and paint. Her sculptural works incorporate a diverse spectrum of materials, both natural and man-made, including sticks, wood, metal, and glass. Generally she works in series, creating artworks that explore particular ideas and concepts mined from a wide range of topics.

Protectors, guardians and looming threats - January 2017 seemed to explode into being. It bombarded everyone and everything with chaos, and revealed an apparently universal contempt. On all sides feelings of being battered followed, and Barritt found herself wanting to escape a world that had started to feel hostile. Her desire to flee manifested in depictions of looming threats, but it also found refuge in improbable, far away lands. This need for safety morphed into drawings of unlikely protectors and guardians. Black and blue are the colors of darkness, of bruises, and of sadness, but they are also the colors of strength and open sky. Barritt’s series, Black and Blue, expresses her current feelings of uncertainty and apprehension, but they also embody her belief in our collective ability to persevere, and eventually find balance.

Organized by Nicole Capozzi and Joshua Hogan, owners of BoxHeart Gallery, the artwork presented in Carolyn Reed Barritt: Black & Blue examines the tension between forced order with the chaotic and unpredictable nature of our world as it evolves through a process of transformation and dissolution.

Born in Carlton Minnesota, Barritt received her BA from Macalester College in St. Paul Minnesota in 1985. Her work has been exhibited nationally, including at Site:Brooklyn (New York), Dab Art (Ventura, California) and the Alexandria Museum, (Alexandria, Louisiana). In 2014 she was selected as one of the first Visual Artists in Residence at the University of Michigan Musical Society. She currently lives and works in Ann Arbor Michigan.