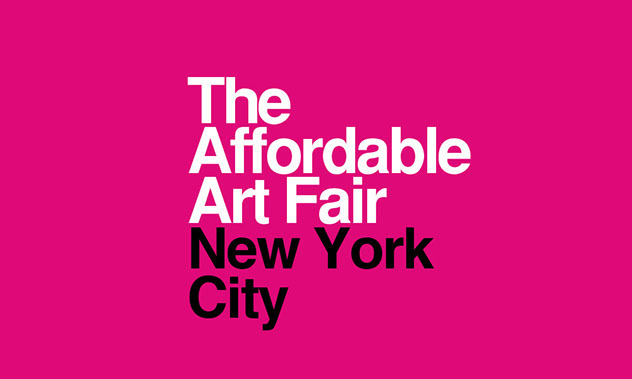 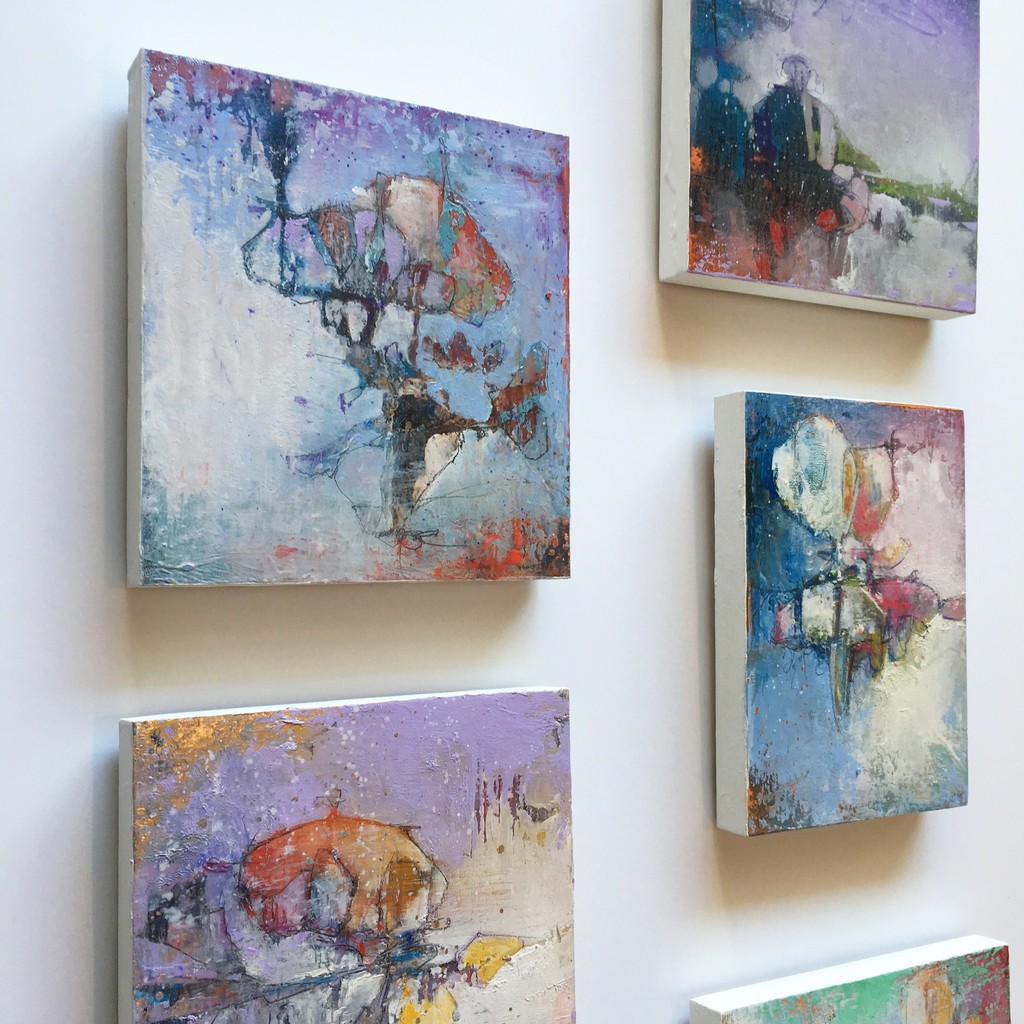 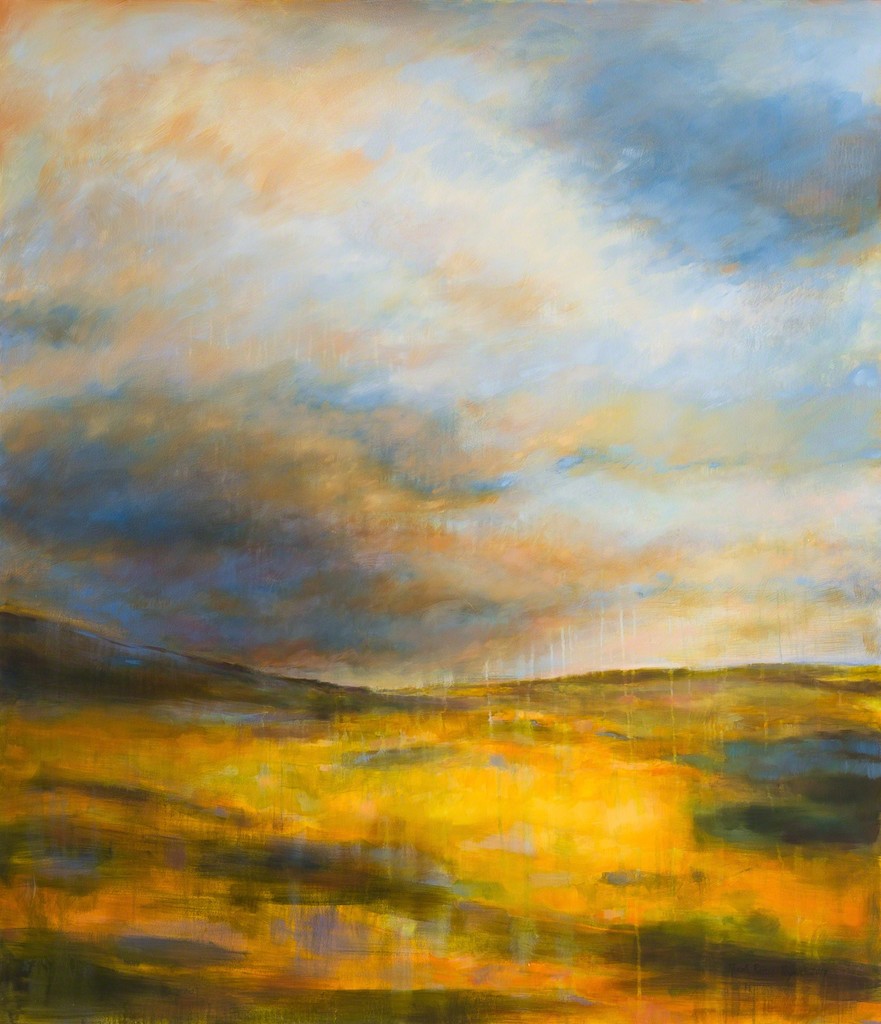 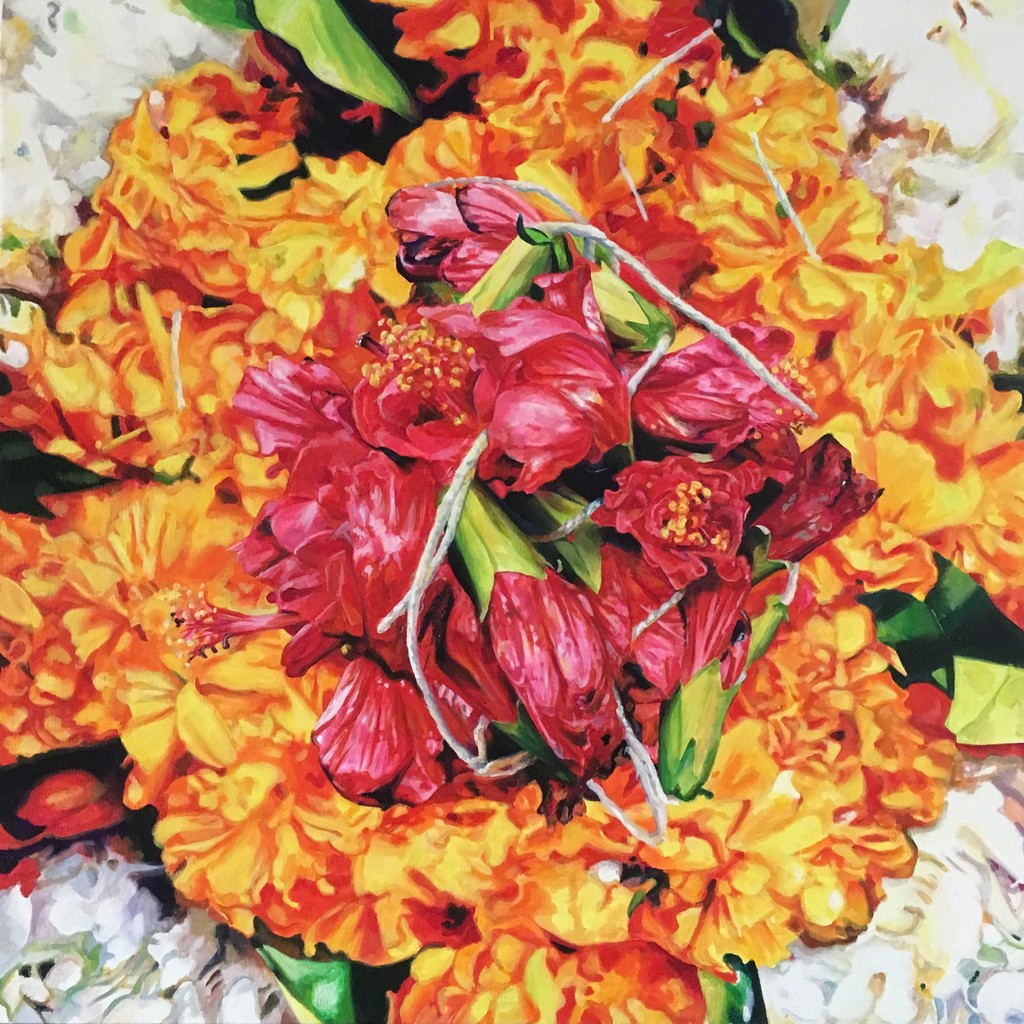 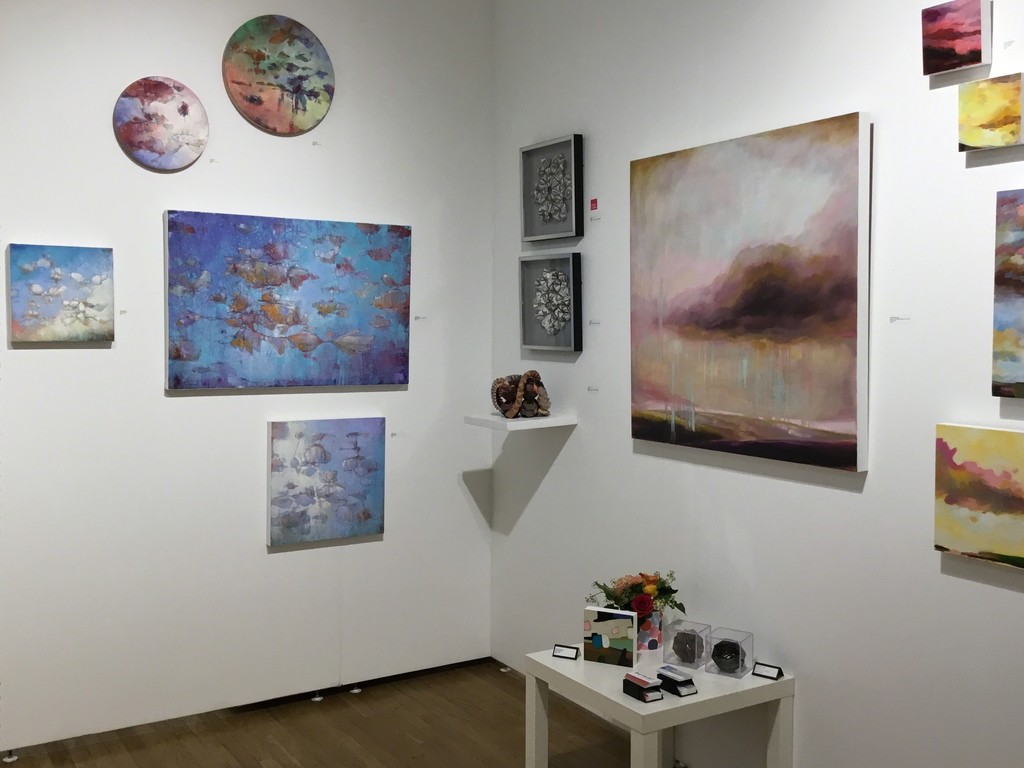 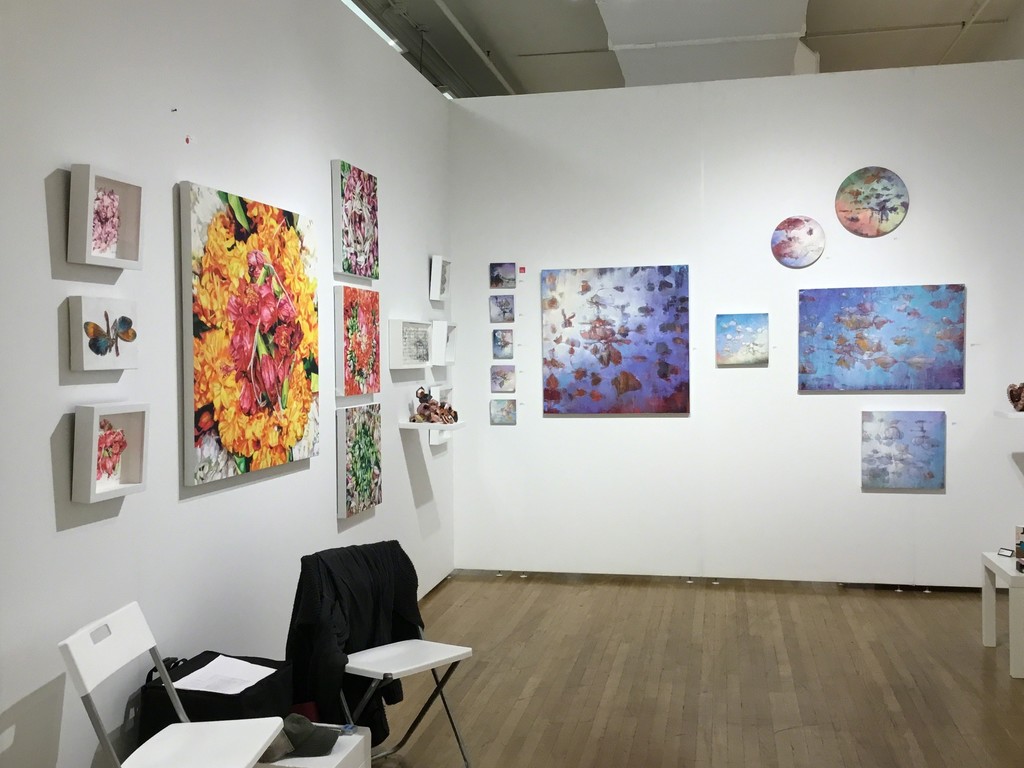 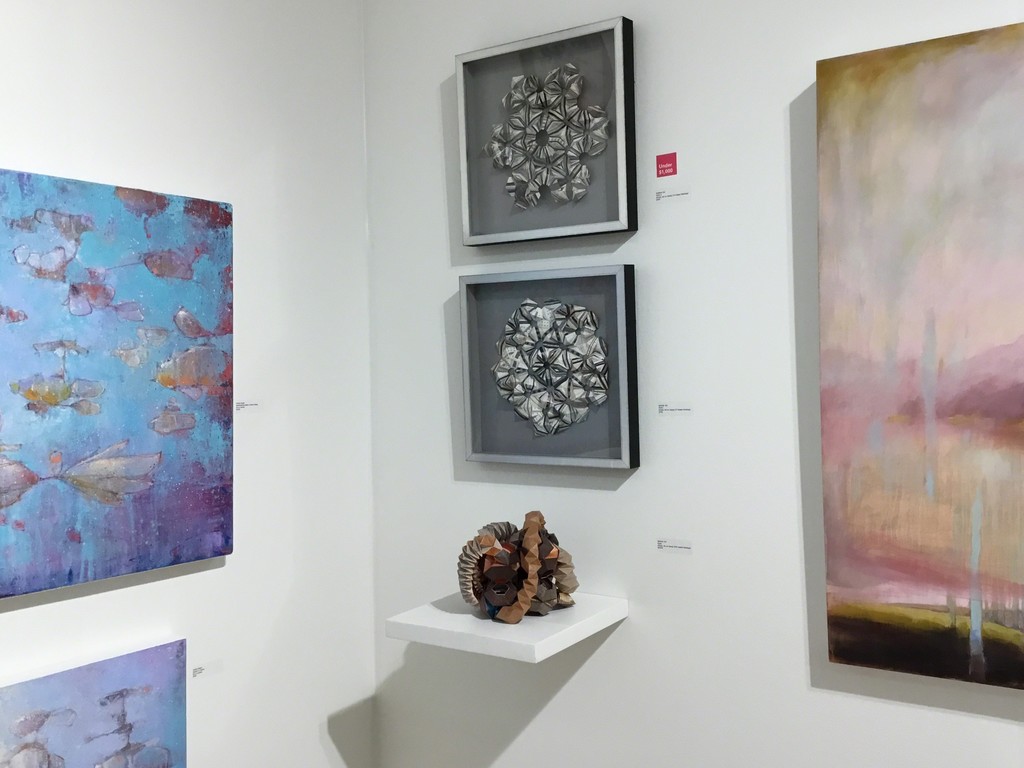 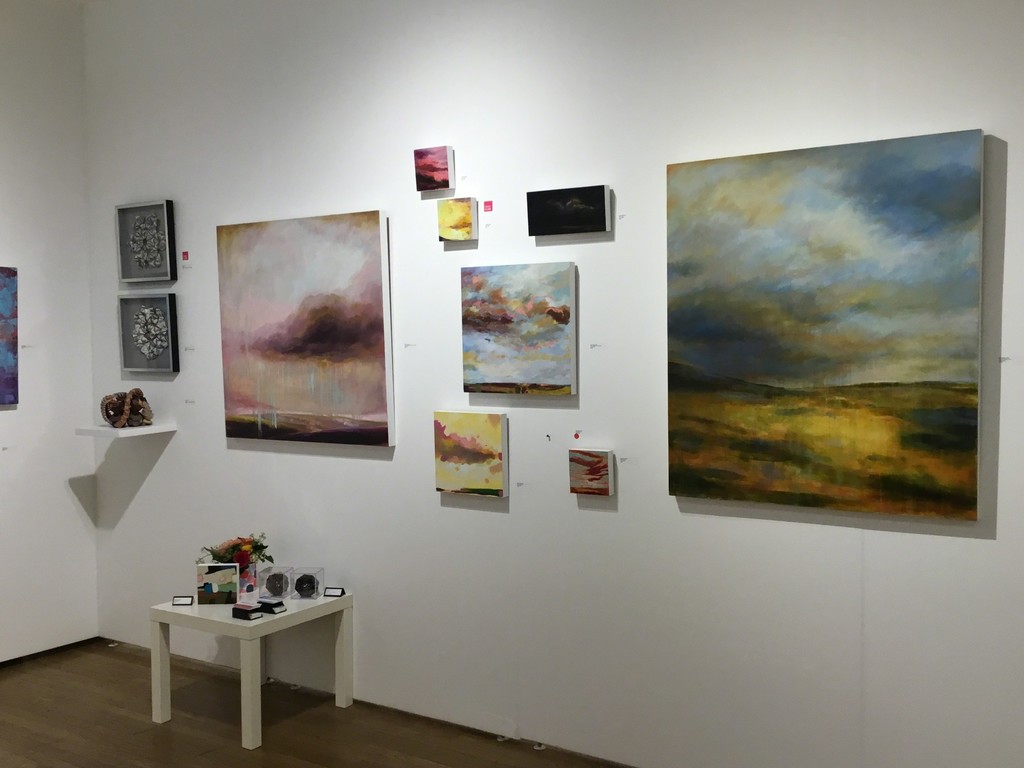 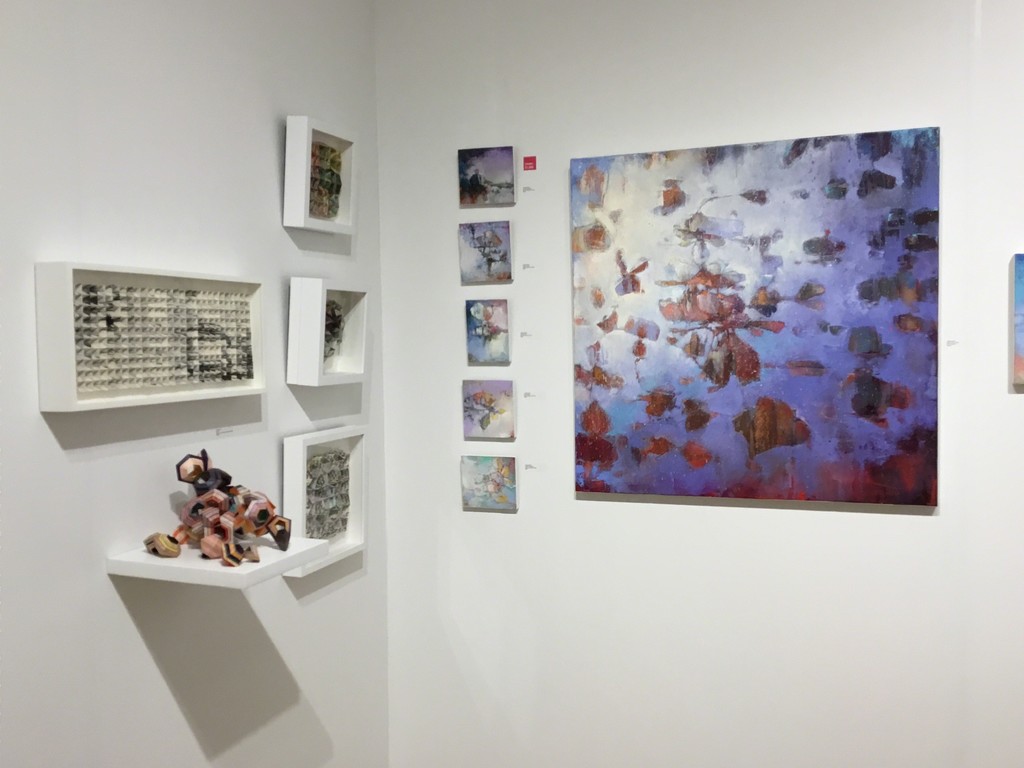 Augustina Droze creates optically powerful paintings depicting arrangements of flowers, fish, birds, moths, and insects magnified and organized into symmetrical compositions that elaborately explore androcentrism, specifically western culture’s pattern of emphasizing masculine points of view. Her current work is inspired by her time in India as a Fulbright-Nehru Senior Scholar creating murals to empower underprivileged girls. In tribute to the courage and strength of the young girls, Droze created a series of paintings which shroud them in ceremonial puja flowers. Work from Droze's series, “Puja”, will be exhibited at the Affordable Art Fair in New York City this fall. She currently lives and works in Beijing China.

Inspired by the poetic writing of Kahlil Gibran, Joshua Hogan uses the word wayfarer to describe the shapes that dominate his abstract paintings. Artists like Turner, Gorky, and Monet are recognizable influences, but his painting aesthetic slips away from any single stylistic bracket with the coalescence of relics from various movements – an abstract expressionists’ self-exploration, a surrealist’s shapes, an impressionist’s brushstrokes. By emphasizing shape and color to describe energy and environment, Hogan's contemporary paintings illuminate how every choice and action we make impacts other people. We are both path and pedestrian, way and wayfarer. Hogan’s series, "Radiance", is exhibited by UGallery + Crate & Barrel and his current series, "Wild is the Wind" will be exhibited at the Affordable Art Fair in New York City this fall. Hogan lives and works in Pittsburgh Pennsylvania.

Andrew Ooi perceives environments, histories, geographies, art, artistry, and human nature to be made up of tangible systems and forms. By occupying these realities and allowing meaning and its significance to develop measuredly, his gradual understanding is determined through an unconventional approach of common mediums, techniques, and design. Handmade gampi papers, produced by the few traditionally-skilled Japanese papermakers remaining, are used to make his paintings and sculptures. From large sheets of gampi, Ooi cuts hundreds to thousands of small pieces which are then individually creased, unfolded, and painted, before re-folding using Japanese joinery and origami techniques. Using acrylics and inks, Ooi combines colour, pattern, and shape with circles, squares, and triangles to create an order as natural, primitive, and in-line with, ages and civilizations well before. Ooi has received two grants from the Ontario Arts Council to assist in the production of his series “Cosmos" and for his exhibition, “Anatomy of Resilience”, at the Karsh-Masson Gallery in Ottawa. His artworks have also been recognized in both the design and art world – from Toronto to Jyväskylä, Finland – and are included in the publications Illuminate Contemporary Craft Lighting (Bloomsbury Publishing) and 1,000 Product Designs: Form, Function, and Technology from Around the World (Rockport Publishers). Ooi’s artwork will be exhibited at the Affordable Art Fair in New York City this fall. Ooi lives and works in Toronto Ontario, Canada.

Nicole Renee Ryan paints distant landscapes based on her memories of memories. Things remembered and things forgotten, emotionally charged ambiguous imagery, are represented by half realistic and half abstract shapes in vivid color - things real and unreal. Ryan creates overly romantic or tragic journeys defined as much by what is missing as by what is present. A contemporary watercolorist, oil painter, and muralist, she has been awarded a residency at the New York Student’s League at Vytacil, a fellowship at VCCA, and was nominated for Pittsburgh's 2016 "Emerging Artist of the Year" by Pittsburgh Center for the Arts. Ryan’s series, “Anywhere and Nowhere” will be exhibited at the Affordable Art Fair in New York City this fall. She currently lives and works in Mercer Pennsylvania.