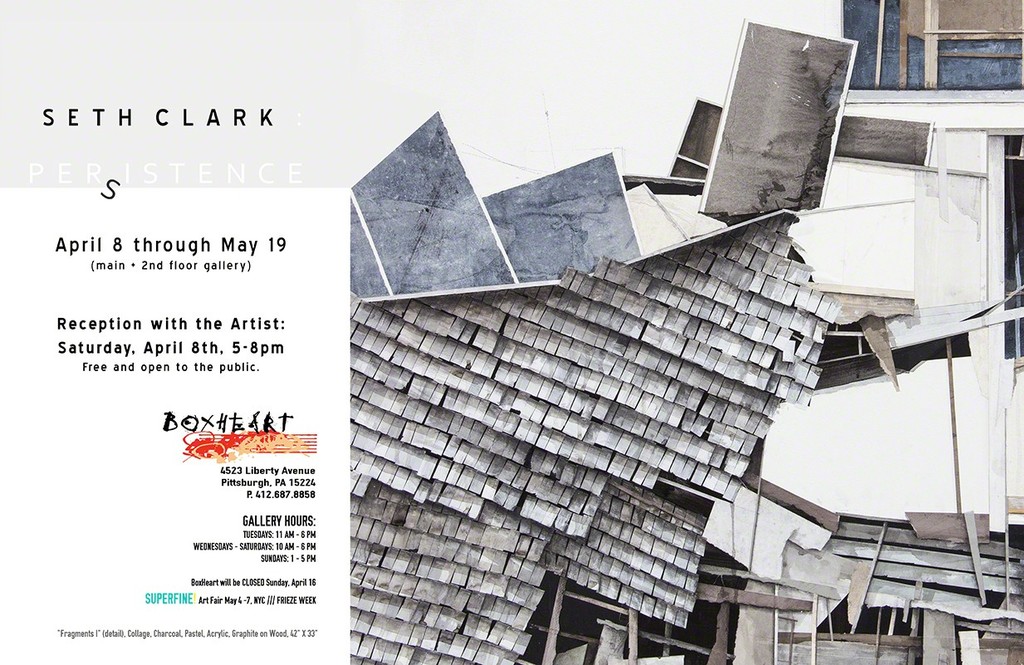 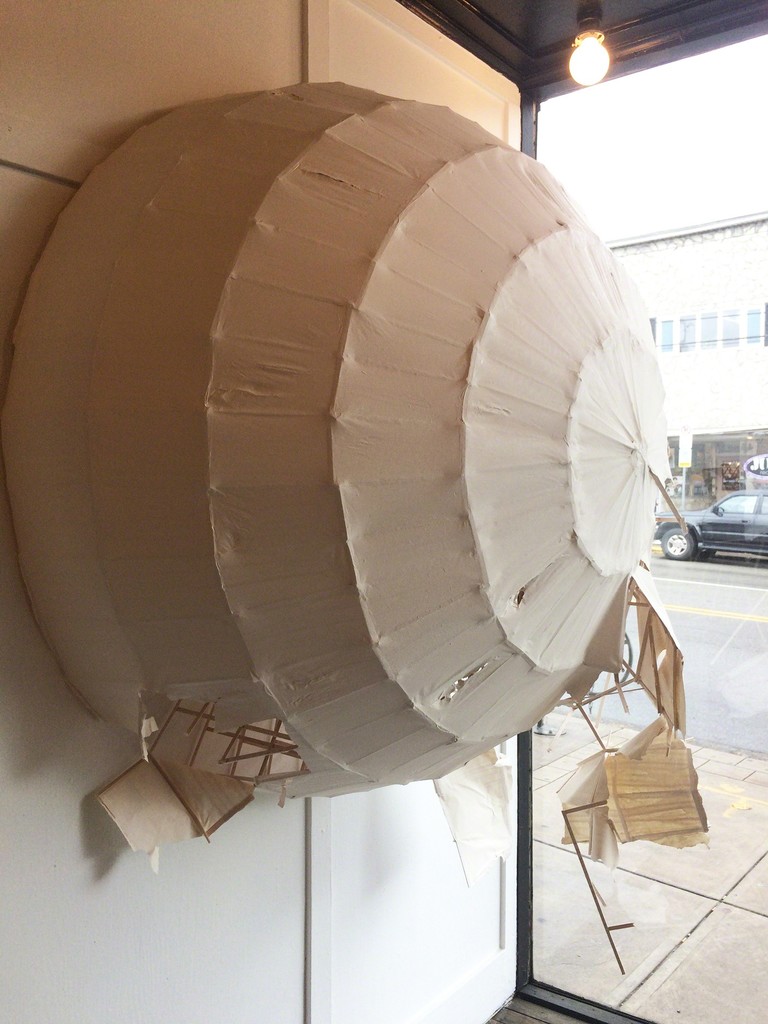 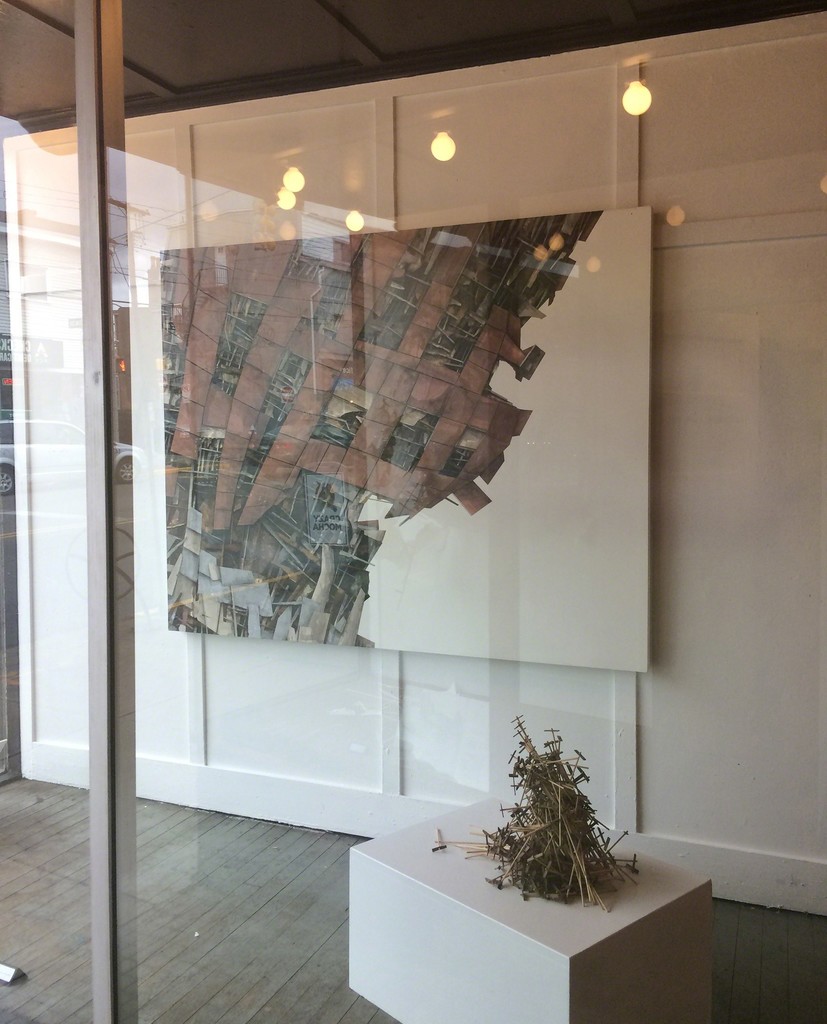 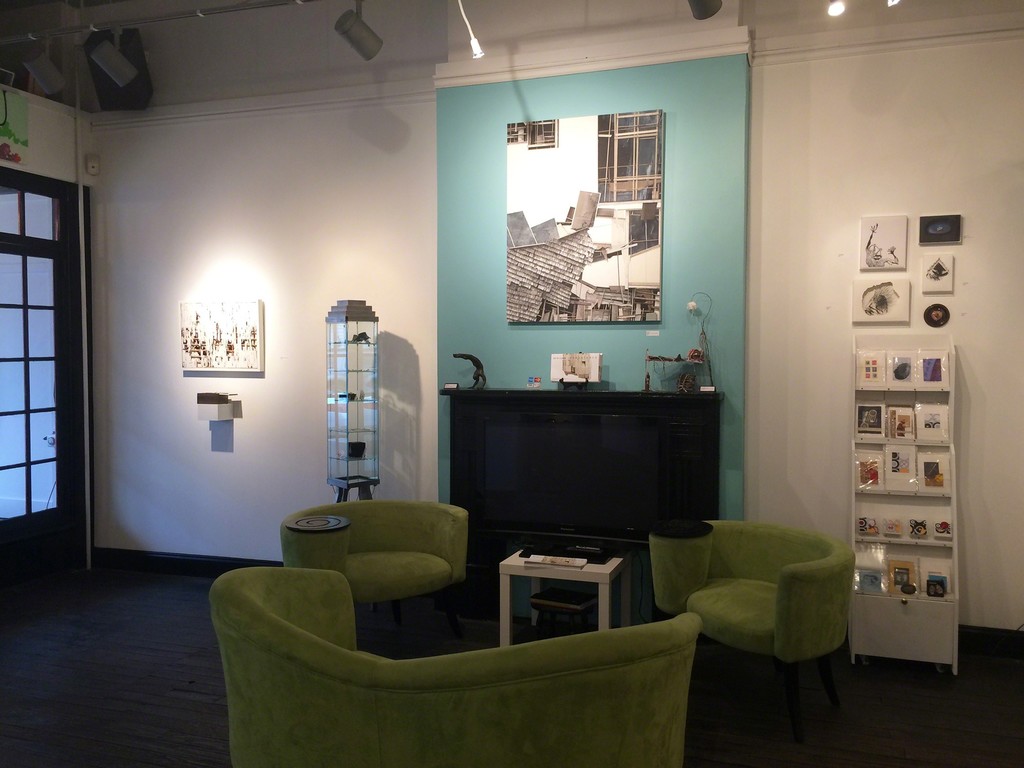 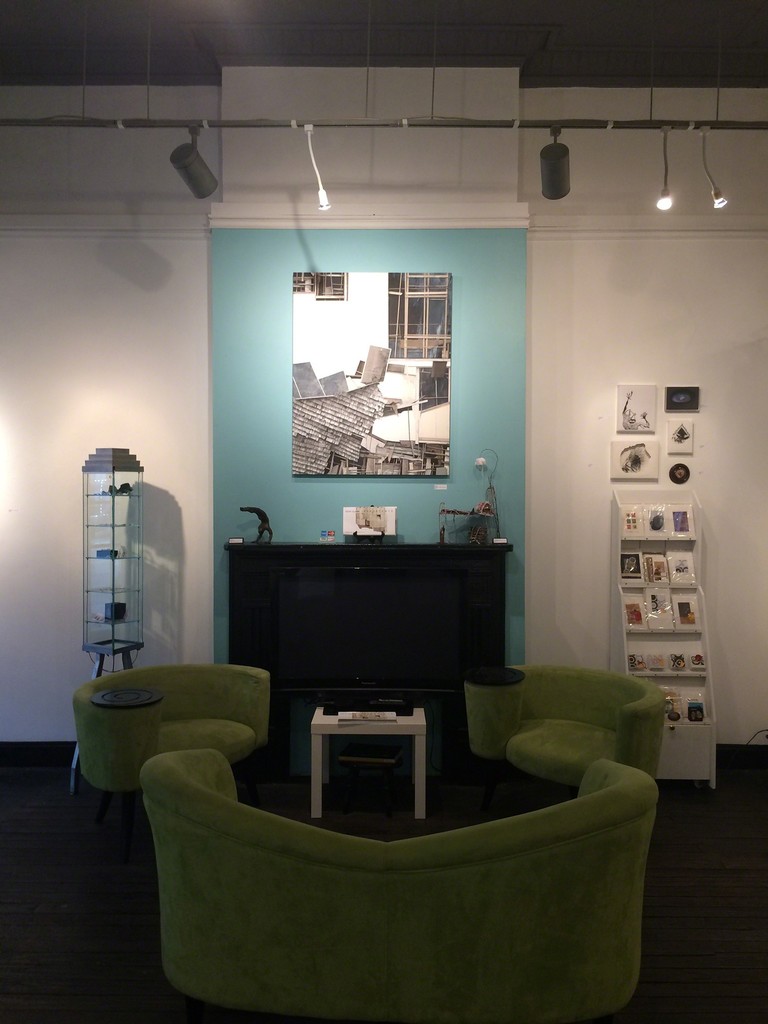 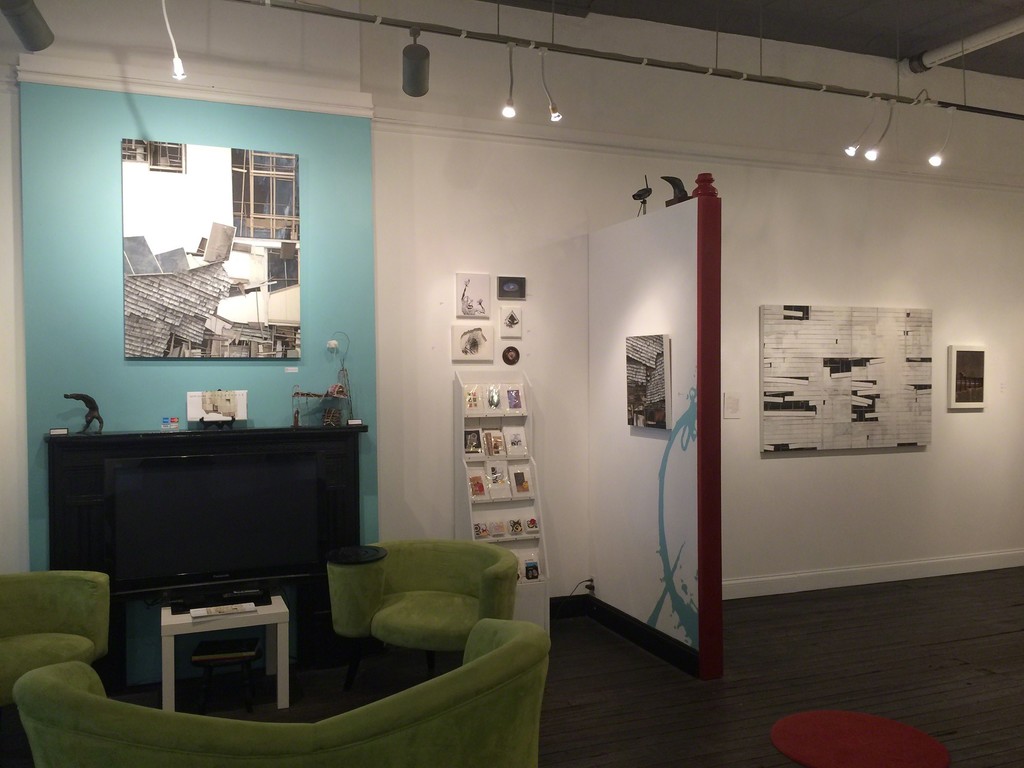 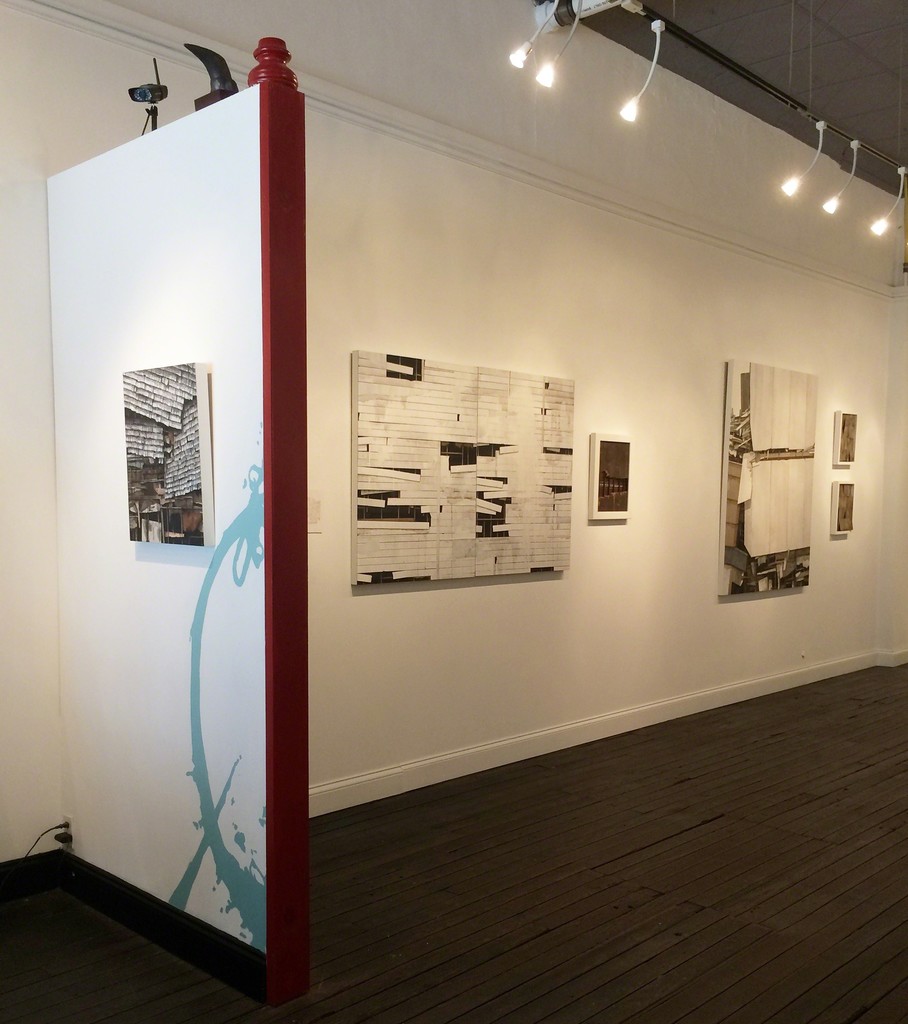 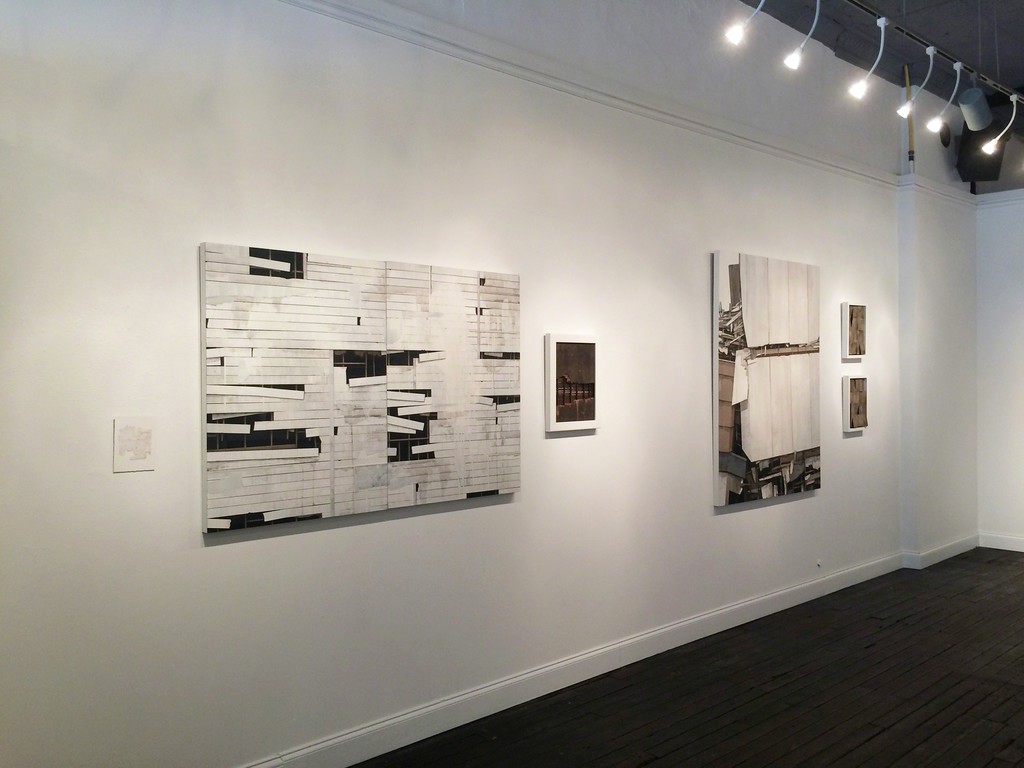 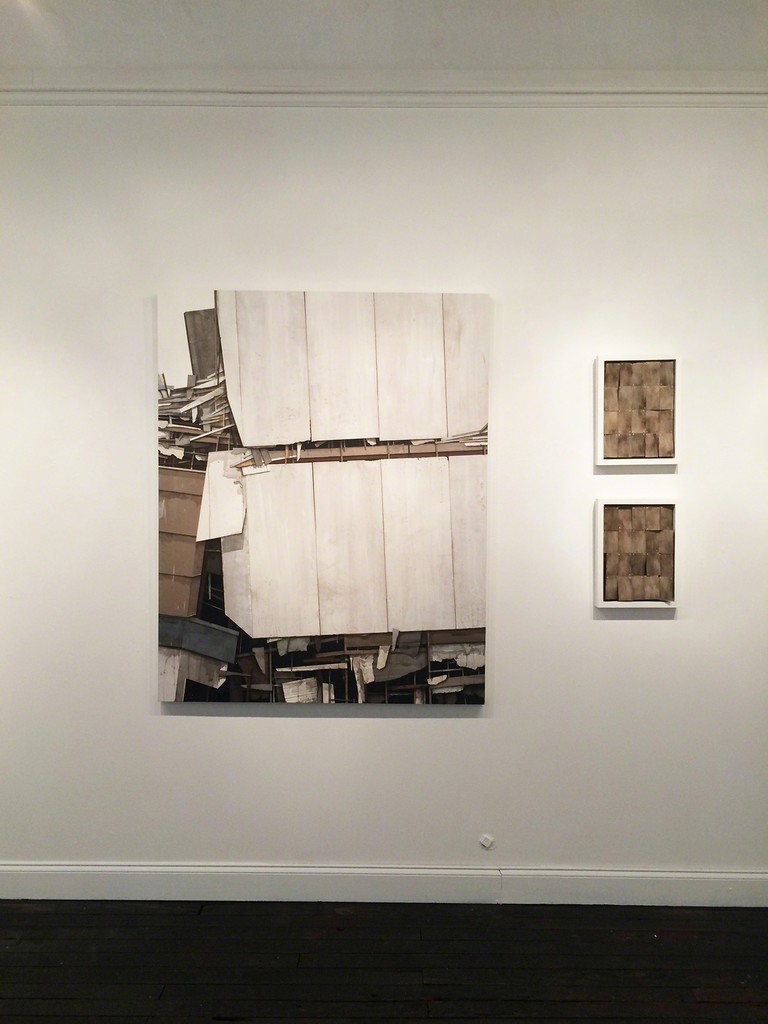 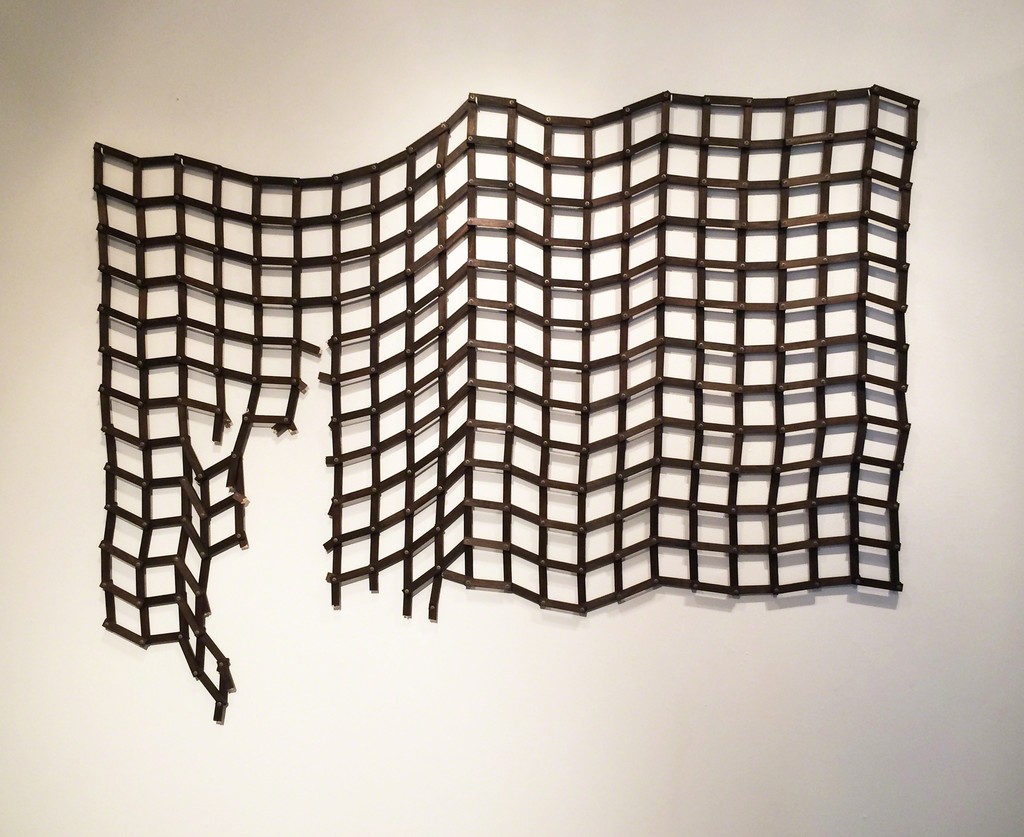 From April 8th through May 19th, BoxHeart Gallery presents Seth Clark: PERSISTENCE (structural systems on the brink of collapse), Clark’s second solo exhibition with our gallery. Nearly everything hangs by a thread in Persistence, the newest collection of artwork by Clark. Two-dimensional paintings are created primarily with collaged found paper and continue to feature architecture on the threshold of ruin. In Clark’s sculptural work, the use of scrap wood and other aged materials are employed to provide the viewer with a brief glimpse into the moment before structural collapse. As Clark absorbs and incorporates his art practice, he pushes limits of size, material, and concept in his artwork, calling attention to the rising instability of the American landscape.

Clark collages with found paper to reflect the fragmented and complex tactility of decay. Once he achieves a dimensional foundation, various medias like charcoal, pastel, and graphite are used to bring definition and depth to these raw materials. The processes of collage and drawing alternate between themselves lending to a seamless blend of the two mediums. It often takes months for the structure to appear out of the many scraps of paper and scribble, for as Clark describes, “something very energized and present to escape out of a slow history of abandonment”. Clark’s sculptural work further links concept and process. Materials like wood, polystyrene, and plastic are arranged and aged to emphasize a specific part of the structure. Clark’s 2- and 3-dimensional artwork illustrates the extent to which a small disturbance in a system’s parts can disrupt the entirety. As his sculptural work provides a closer look into a weathering section, his two-dimensional collage builds the narrative of the structure’s story.

Clark (b.1986) grew up in Seekonk Massachusetts. He received his BFA in Graphic Design from the Rhode Island School of Design in 2008. Shortly after graduating, Clark moved to Pittsburgh and began, “Abandoned”, a series of collage works that captured specific abandoned houses in Detroit. Utilizing his ambitious paper layering process to focus on deteriorating architecture, Clark exhibited extensively in Pennsylvania from 2009 through 2015 including exhibitions in the Carnegie Museum of Art, the Westmoreland Museum of American Art, the Pittsburgh Biennial at the Pittsburgh Center for the Arts, and the Butler Museum of Art. During this time, he received three Design Excellence Awards from the AIGA Pittsburgh, Best in Show at Three Rivers Arts Festival, the Irene Pasinski Sailer Award, the Irving B. Gruber Award, and was a Flight School Fellow. In 2015, Clark was named “Emerging Artist of the Year” by the Pittsburgh Center for the Arts and he began experimenting with alternative materials to create three-dimensional artwork. Last year Clark was a resident artist at the Pittsburgh Glass Center where he worked collaboratively with glass artist Jason Forck to create “Dissolution” a series of works integrating the use of glass into their shared interest in decaying architectural forms. Clark has been featured in publications such as Creative Nonfiction, New American Paintings, and DASH, and featured in national blogs such as the Jealous Curator, Booom!, and Juxtapose. Most recently, Clark’s artwork was exhibited at Art on Paper during The Armory in New York City and Aqua Art Miami during Art Basel Miami Beach. This March, he was a resident artist at the United World College of South East Asia where he will teach students in Singapore principles of art and design.