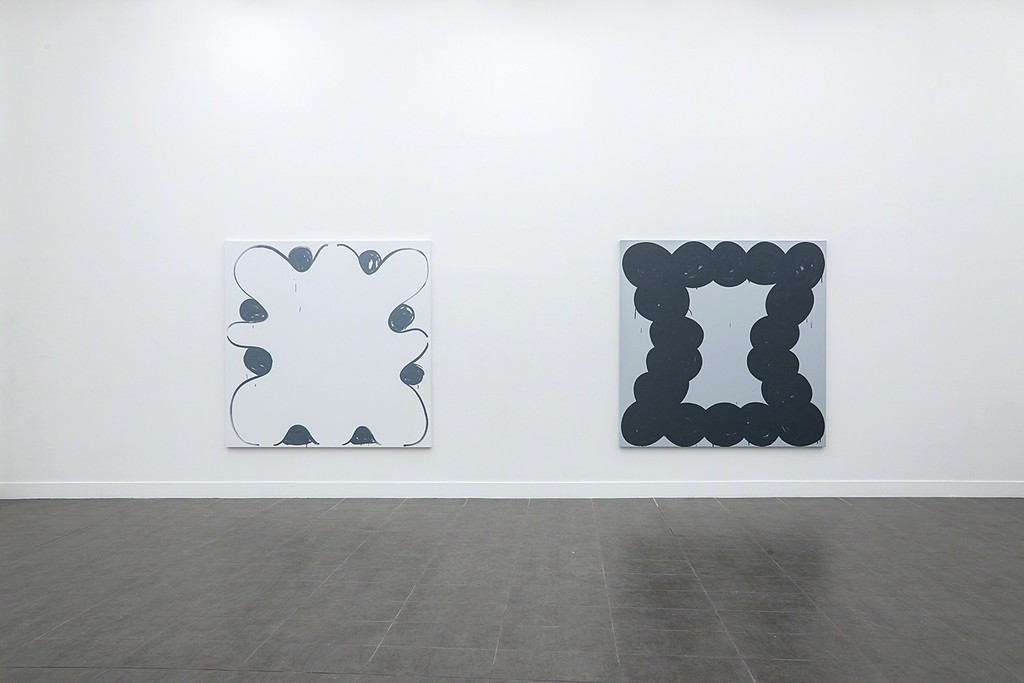 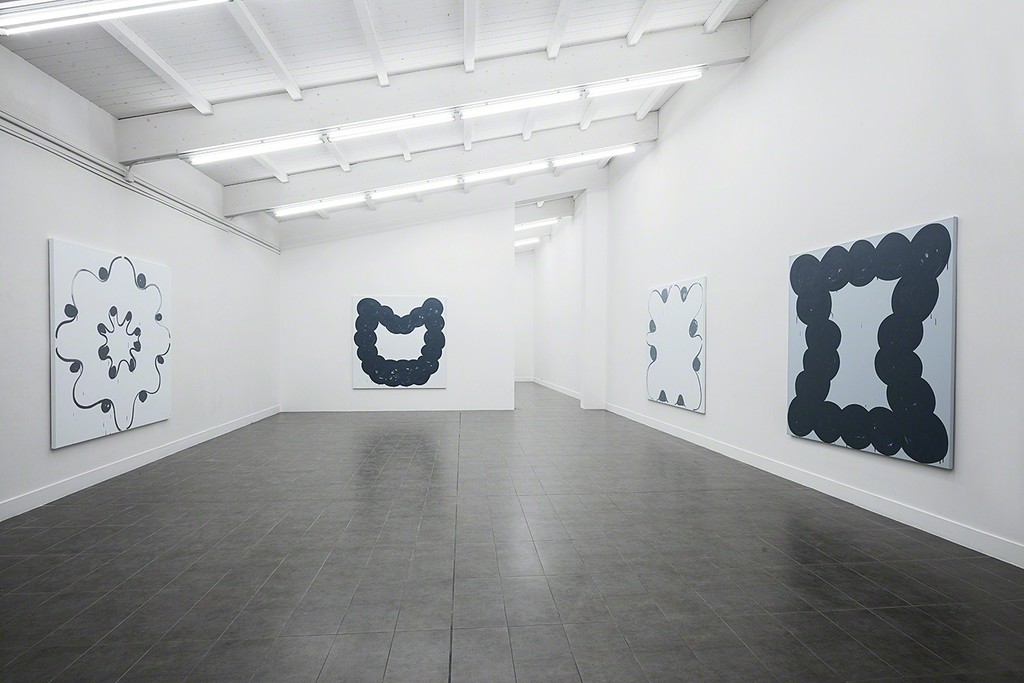 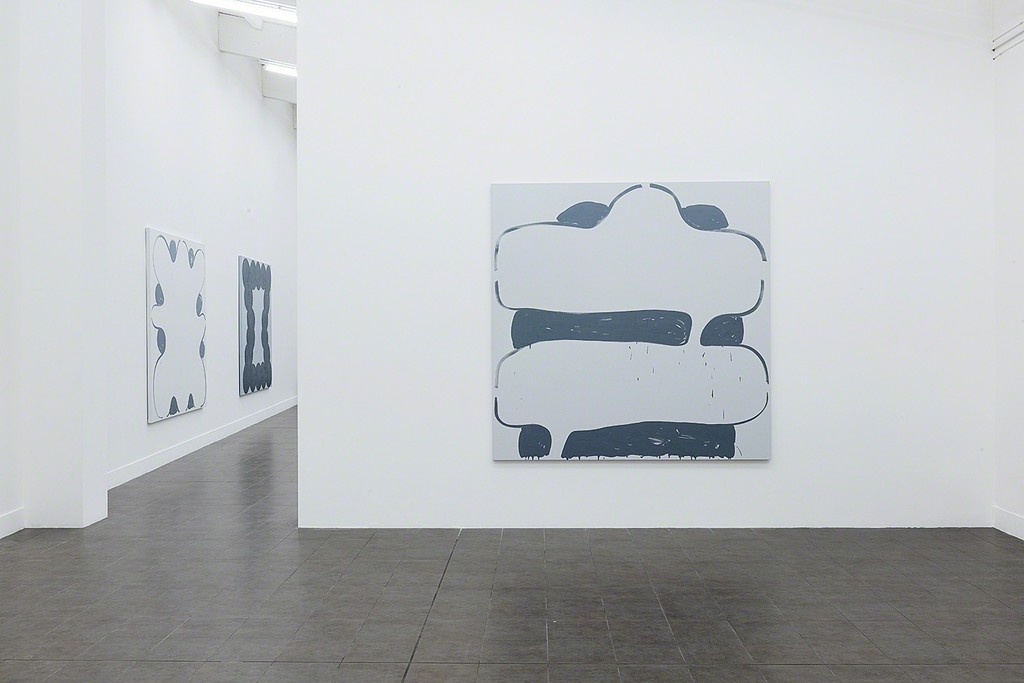 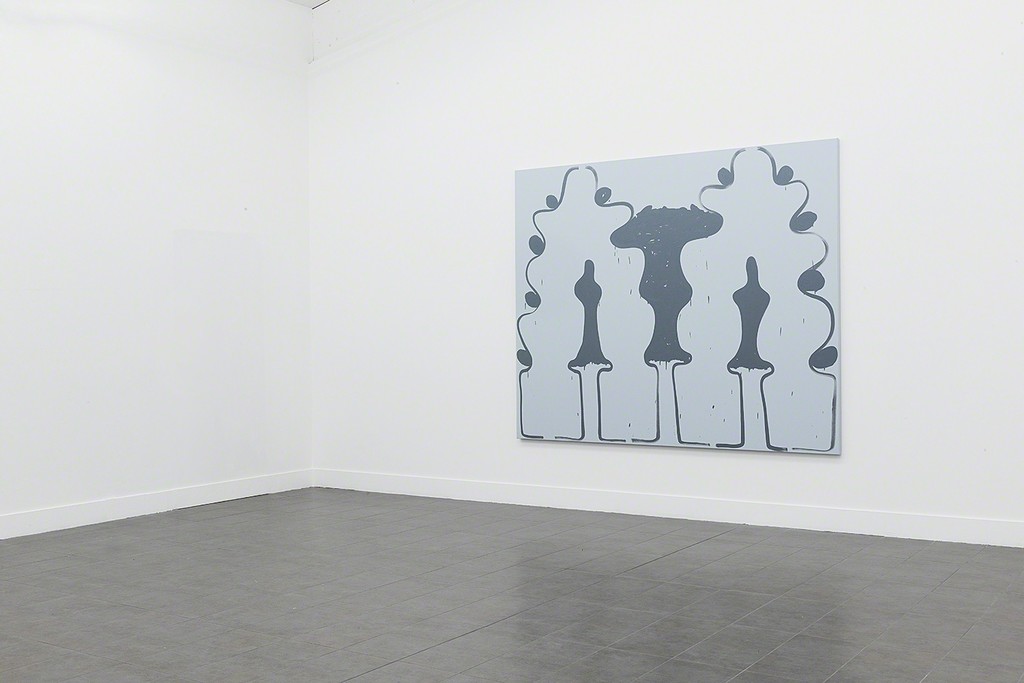 Moon Decorum, the painting from which the exhibition takes its title, has both of these forms occurring at once. On the one hand, there are fluid gibbous forms that explode outward and highlight escaping drips akin to the effulgent white drips in the black and white paintings of Willem de Kooning. On the other hand, her marks evidence a reduced seriality, manifesting as a footnote of expression or an acknowledgment of the ironic symbol of gesture—much as in a work by Jasper Johns. Therein resides what could be called a lunar friction in Feldman’s paintings, between two divergent cultural interpretations of lunar activity: the moon demonstrates precision and regularity in its rotation, yet epitomizes our primal fears of its transformative power (as in the cultural myth of the werewolf). The darkness of these paintings is analogous to the cold vacuum of space and also to the palpable electricity of fear in the night air: Heideggerian, both angst and furcht, that is feeling that is abstract and concrete.
It is noteworthy that Feldman titled her exhibition in consideration of the moon with its multiple connotations. We take the scientific and poetic resonance of the moon—its tidal sway, its white and grey modulated surface—as commonplace. We are accustomed to thinking of a stark division between the science of astronomy and the art of painting: the planetary bodies as opposed to the Romantic achievement for instance in the rückenfigurs, who sit with their backs to the viewer gazing at a bright hovering orb in the sky and populate the paintings of Caspar David Friedrich.
The ancients had no such divisions. Plato reasoned the moon revolved with mathematical precision in a musically harmonious motion while at the same time he understood it as being an apparatus of divine retribution where the gods could play out their wrath on humans below. It is this duality that Feldman strikes in her most recent work.
A painting such as Swollen Omen alludes to the aforementioned primal anxieties and also recalls the body. The cavities and protrusions of her bulbous shapes simulate viscera. Is it her body? Is it an abbreviation of her movement with the brush across the surface? Is it a thigh or a knee? Feldman’s lines are reminiscent but indiscernible, and their allusiveness hardly matters. What does deserve consideration is how these forms activate reminiscence. Feldman creates a biomorphic shorthand that reminds us of a body suspended between the scientific and the poetic: between the anatomic and the lustful. It is on that line that her rippling forms can activate humor and also serious thought. When Feldman approaches her surfaces, she is this instrument on the milky porcelain finish of her surfaces. You can sense her wildness in a field of restraint: always grey paint upon an always immaculate light ground.
Feldman’s greys fluctuate between lighter and darker values, often reading as pewters, slates or concretes. Her greys are tethered to her mark making. I think of their subtlety as akin to clouds casting shadows over the landscape. Forms racing on a surface, but intangible and completely abstract. Similarly, her greys mirror movement, like a shade following a figure. At times faint and at other times dusky, they intimate the trace of her painterly act.
Pronounced shifts in her oeuvre are evidenced in her mark making. Her cartoon-like stroke shows the influence of Futurism, of Pop namely Andy Warhol and Roy Lichtenstein. But with the Feldmans in this exhibition, I think of a time in art that is so rarely considered, such as in the work of Nicholas Krushkenick, who painted after the heyday of Abstract Expressionism in a style best described as abstract Pop. Unlike Krushkenick, Feldman restricts her palette showing her digestion of all of these iconic painters, but also her improvisation in the current moment. Aren’t we in such an era of hyper-commodification, but also of hyper-regionalism, and locavorism? We consume images, products, ideas at a clip, but are almost wistful for a slower time. Feldman’s synthesis of an immediate serial form and her judiciously subdued palette manages to locate a contemporary abstraction that navigates beyond irony to a place of sincerity and sharp wit.