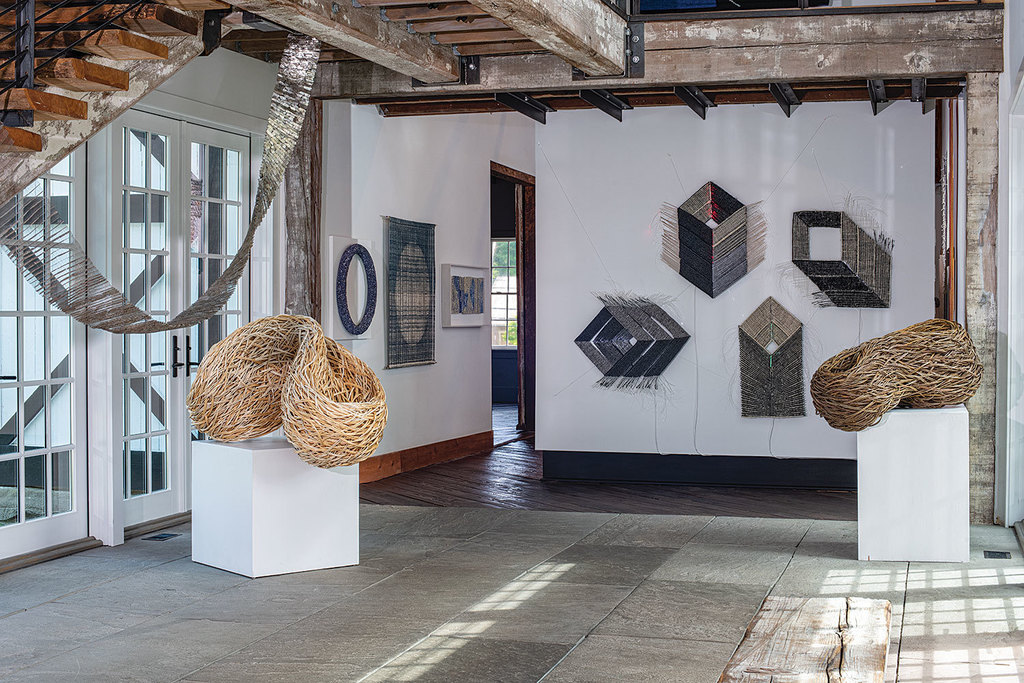 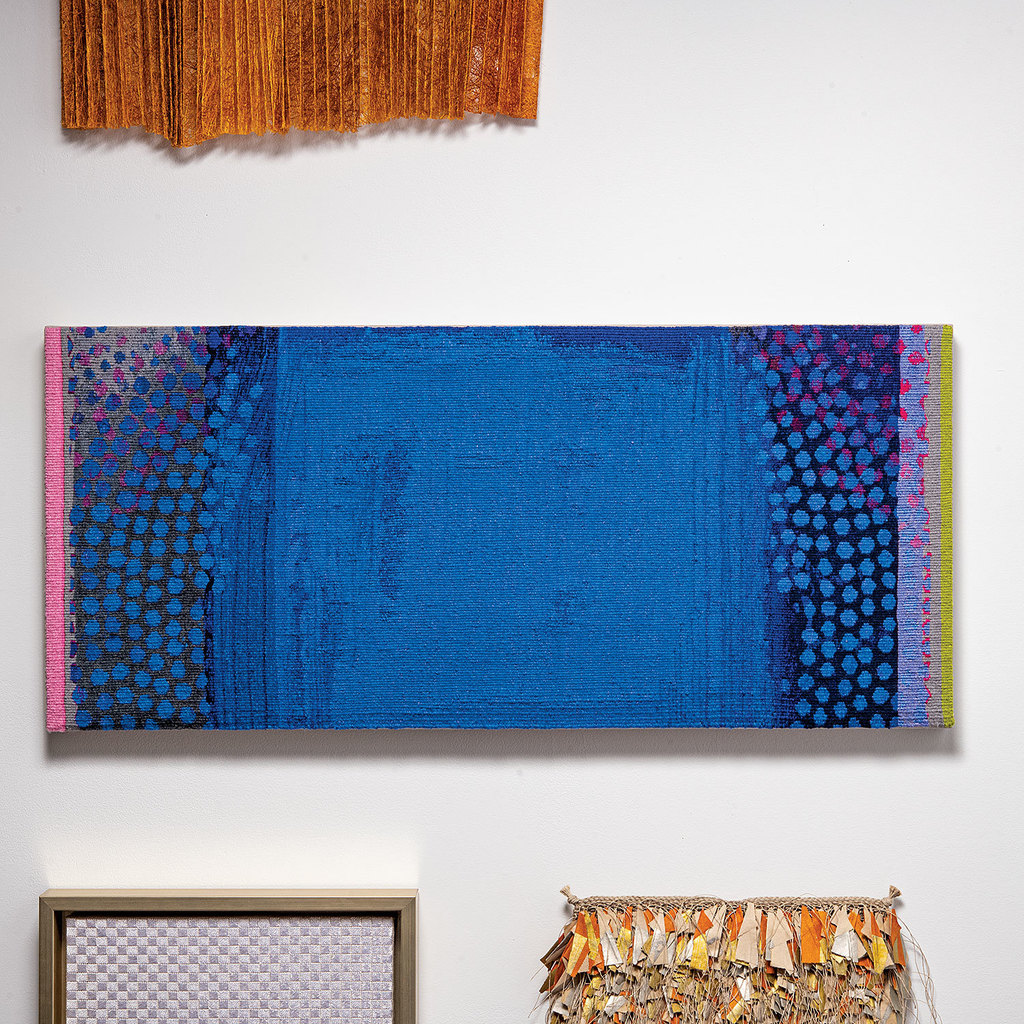 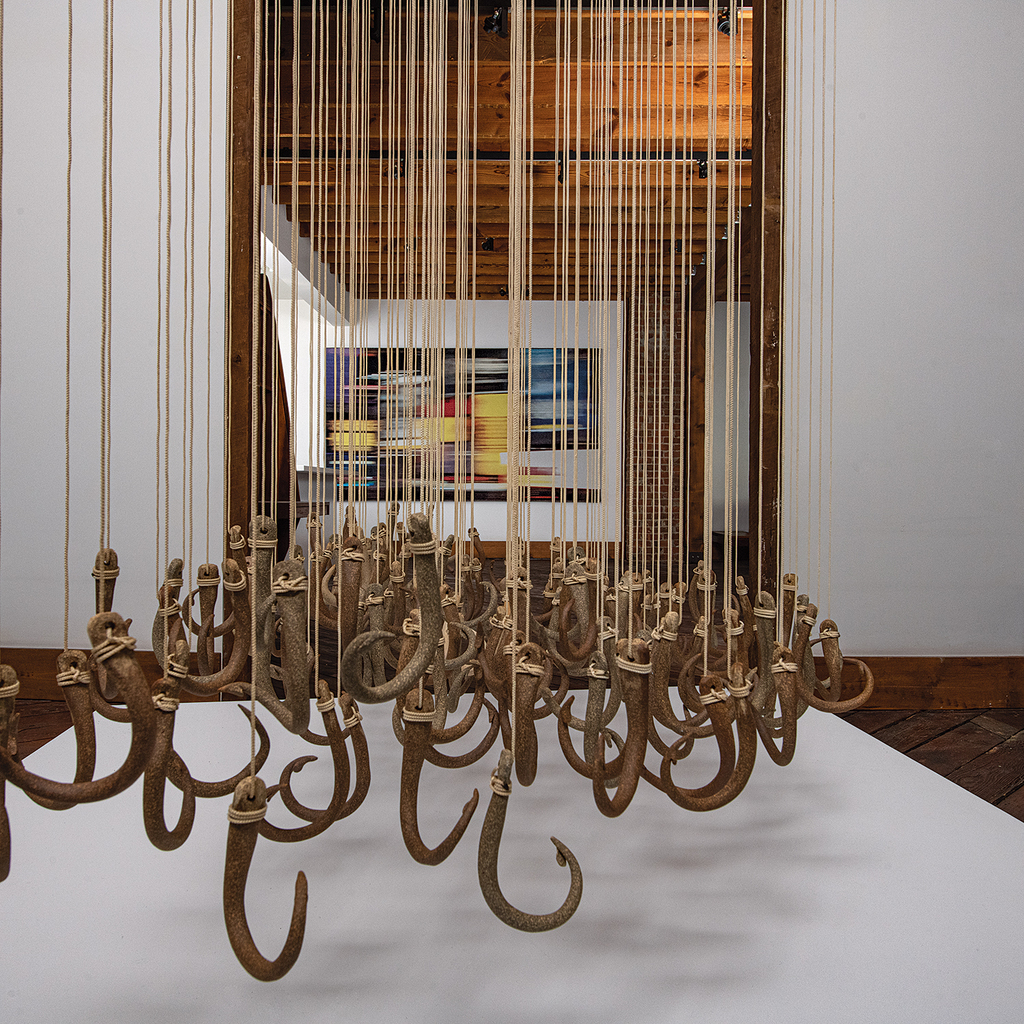 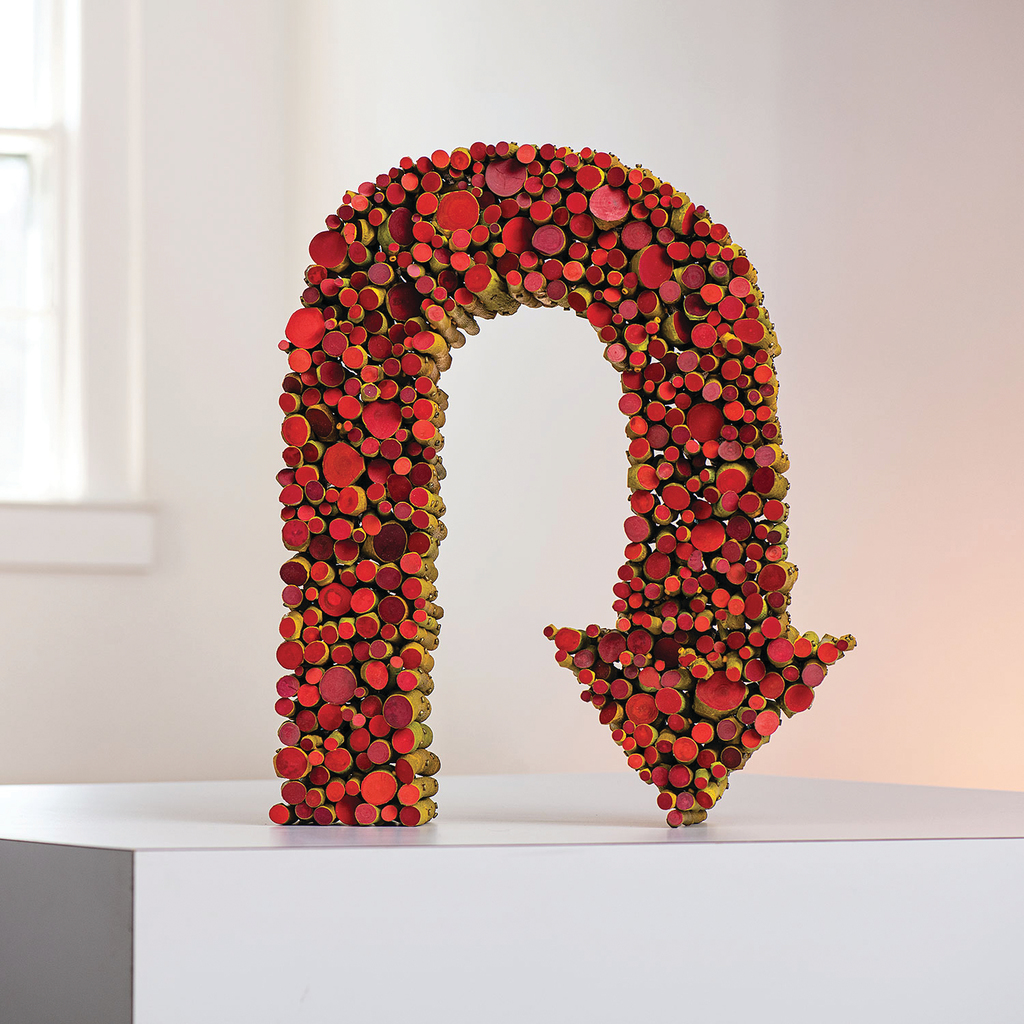 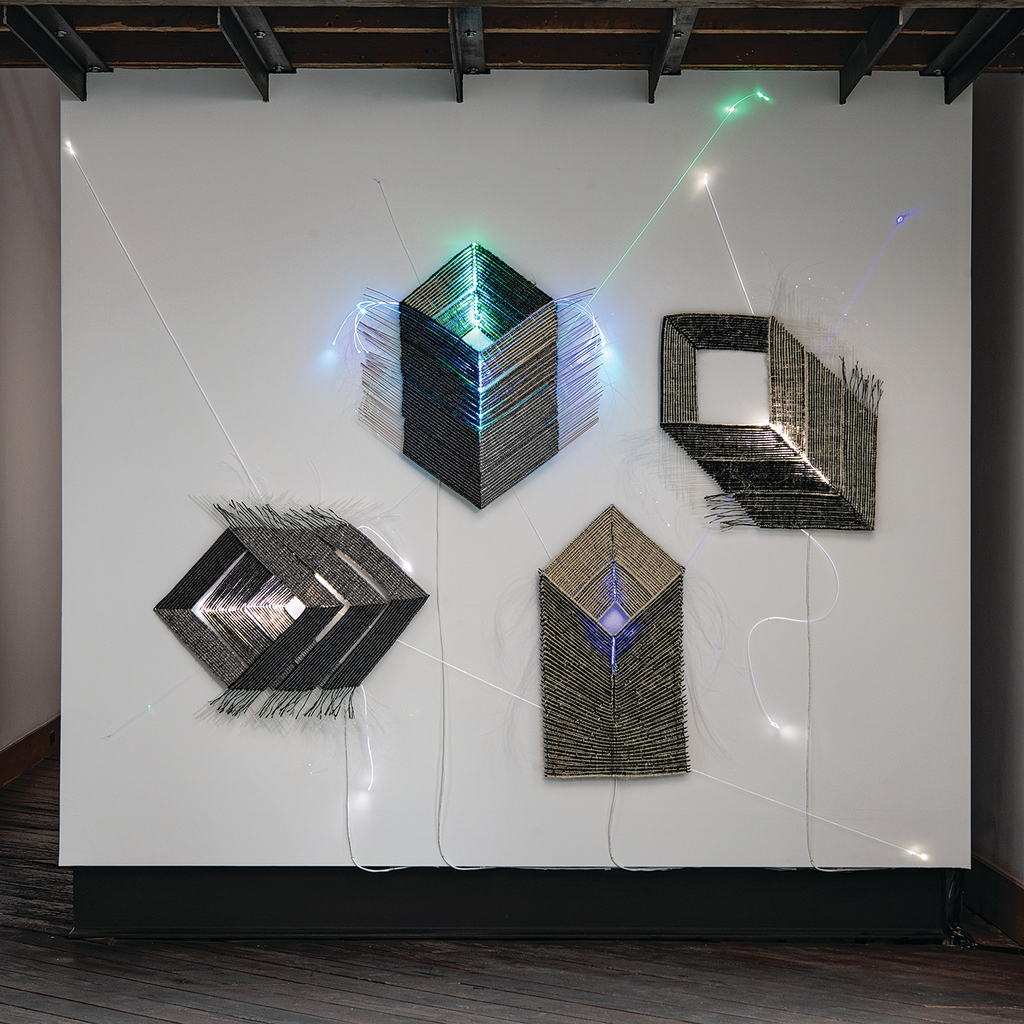 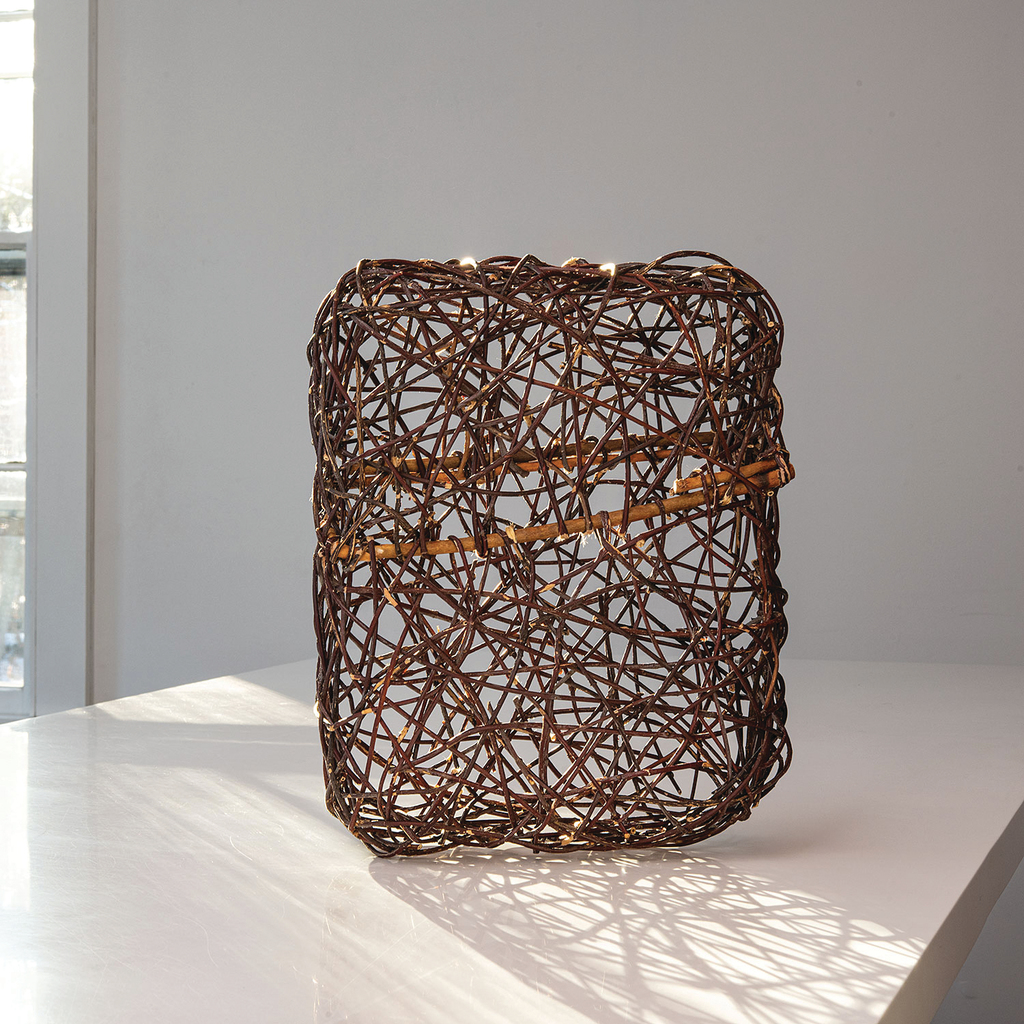 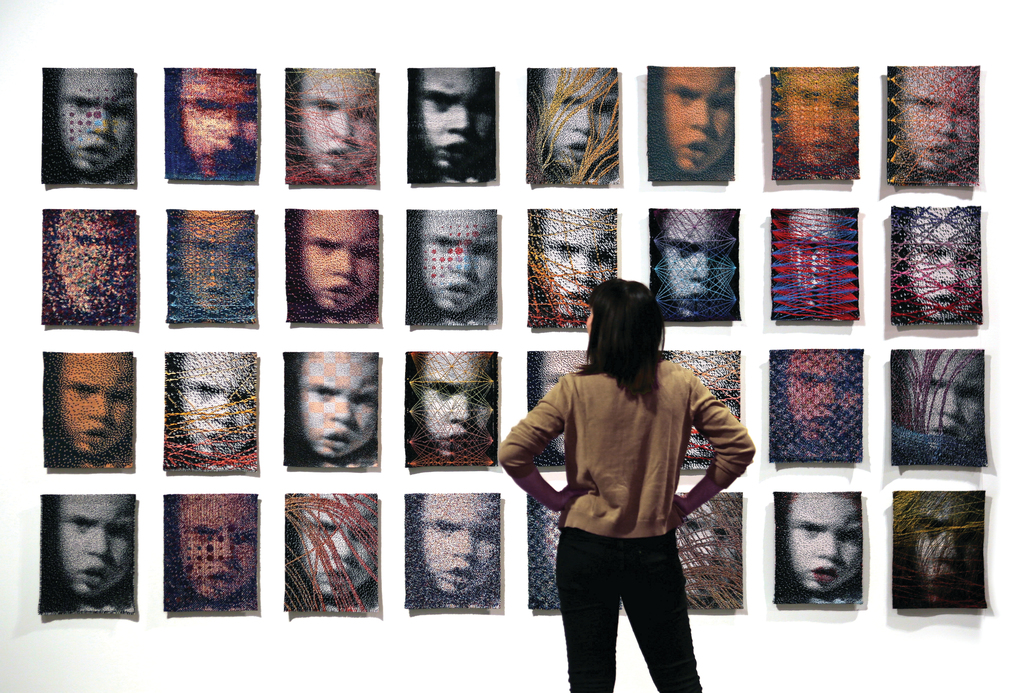 browngrotta arts is pleased to announce their Fall 2020 “Art in the Barn” exhibition ​Volume 50: Chronicling Fiber Art for Three Decades - ​a retrospective celebration of 50 print catalogs on fiber and modern craft published by browngrotta arts and exhibition of 60 works by 50 important artists of fiber, ceramics, and mixed media, who have helped define modern craft movement since the 1950s. Artists include Laura Ellen Bacon, Polly Barton, James Bassler, Annette Bellamy, Lia Cook, Mary Merkel-Hess, Agneta Hobin, Gyöngy Laky, Simone Pheulpin, ​and ​ ​Aleksandra Stoyanov​ ​to name a few.
A forerunner in the field, browngrotta arts has been dedicated to researching, documenting, and raising awareness of fiber and modern craft art through exhibitions and catalogs for over 30 years. The publication of the 50th catalog of the same title, will continue the tradition with full-color exhibition photos by the co-founder of browngrotta arts’ ​Tom Grotta, and an essay by ​Glenn Adamson​, noted author, historian, curator, and former ​Director of the Museum of Arts and Design​ in New York.
The range of works on view will include woven vessels, three-dimensional sculptures made of paper, wood, jute, waxed linen, cotton, gold leaf, steel, ceramic, fiber-optic, and basket forms of bark and twigs, jasmine and bamboo, willow and cedar. A number of artists have created wall works of linen, viscose, steel, cotton, horsehair, fish scales and in one case, silk from silkworm raised by the artists. The techniques are as varied as the materials -- weaving, plaiting, knotting, molding, ikat, tying, bundling, crochet, and ​katagami.

There will be several large-scale museum-quality works on view. The show’s centerpiece is ​Long Lines​ (2010) by Alaska-based artist Annette Bellamy​ (b. 1951) whose work is inspired by her life on the sea as a fisherwoman. It is made of 132 ceramic hooks suspended from 12 ft of twine. The kinetic nature of the hanging work reflects the movement of the sea.
Drawing from her Nordic-Finnish roots, ​Agneta Hobin’s​ (b. 1945) fiber sculpture, ​Bridge​ (2001), traverses 18 ft across the entrance of browngrotta arts between the original structure and extension wing of the house. The artwork involves a unique technique developed by Hobin, using mica and handwoven stainless steel mesh.
Israel-based weaver ​Aleksandra Stoyanov’s ​(b. 1957, Ukraine) ​Waiting 1-4​ (2012) is a four-panel tapestry that features life-size portraits of the artist’s ancestors, standing 9 ft tall and 2.75 ft wide each. Somber tones reflect the landscape found in northern Israel where she immigrated in the 1990s, fleeing from the worsening anti-semitism in her home country of Ukraine. Her work, woven from her own handmade threads of raw wool, portrays a deeply emotional quality that reflects the social dilemmas experienced by immigrants, the loss of family, and disconnection.
California-based ​Lia Cook’s​ (b. 1942) neuroaesthetic experiment is titled ​Su Series ​(2010-2016). It is composed of 32 woven identical images of her face as a child superimposed with empirical data from her neuroscience research, created on a Jacquard computerized handloom. Each individual image is translated and altered through different weaving structures, provoking a subtle and sometimes dramatic variation in emotional expression from the viewer.
Three periods of work by ​Mary Merkel-Hess ​(b. 1949) will be represented in the exhibition. Merkel-Hess is known for her “landscape reports” - lyrical basket forms of brilliant green, indigo, cornflower, red, and bronze, composed of paper cord and reed inspired by the natural surroundings of the prairie of her hometown in Iowa. In the mid-90s, she eschewed color and began using translucent white papers of gampi, kobo, abaca, flax for vessels, sometimes tinged with gold leaf. In her third period, her works are less recognizable as vessels; they have grown larger and more sculptural and her recognition, too, has grown.
Gyöngy Laky’s​ (b. 1944) four works in the show continue her personal examination of the complex relationships with the world around us Deviation,2020, is a typographical wall sculpture made of apple trimmings, acrylic paint, and screws, portrays many meanings, from functioning like diacritical marks representing “​Oh ,Why?​ ” to the myriad implications and emotions of the word “​Oy​” or, if flipped, “​Yo​; Other works include ​We Turn,​ 2019, ​Traverser,​ 2016, and ​Dry Land Drifter,​ 2010.

Cataloging the Cannon
browngrotta arts published their first catalog as a pamphlet in 1990, ​Markku Kosonen: Baskets and Woodwork, which included 27 b&w photographs. The 49 catalogs since have collectively recorded a narrative of Modern Craft and contributed in no small measure to preserving the continuity of the field.
“Every artist here is a master: Mary Merkel- Hess, America’s primary paper sculptor; the great structuralist Kay Sekimachi and her husband, the woodturner Bob Stocksdale; Leon Niehues from Arkansas, who has infused traditional basketmaking with rare formal intelligence; the two beating hearts of Bay Area fiber art, Ed Rossbach and Gyöngy Laky; magisterial Canadian colorist Mariette Rousseau-Vermette; and the leading exponent of pictorial tapestry of the past half century, Helena Hernmarck.”​ ​Glenn Adamson

This archival documentation has not only permitted their pioneering exhibitions, which are ephemeral in nature, to enter into the canon but provides a rare historical insight and a unique chronicle of an often-overlooked art field that is currently enjoying a renaissance. As fiber art gains renewed recognition and reappraisal from major institutions, the browngrotta arts archive, in which works by ​Sheila Hicks, Lenore Tawney, Ed Rossbach, Magdalena Abakanowicz​ and many others are showcased, is an invaluable resource.
"There are a few catalogs that go beyond the intellect to convey the spirit of the exhibition objects. The fine images of browngrotta arts’ publications capture the dimension of the objects, something often lacking, yet totally necessary to the appreciation of fiber. Their publications seem to consistently engage much more than readers’ minds,” wrote ​Lotus Stack​, then-Curator of Textiles at the Minneapolis Institute of Arts in Minneapolis, Minnesota, in 1999.
When browngrotta arts founders, Tom Grotta and Rhonda Brown began promoting artists in the late 1980s they discovered two important facts about the field. First, at that time, before digital printing, galleries and museums rarely had the budget to document their exhibitions in a catalog or book. Second, regardless of the medium, when catalogs were prepared, the works were photographed like paintings: two lights at 45-degree angles, dimension and detail obscured.
Grotta set out with the intention to resolve this disparity and began an annual cataloging program recording exhibitions, artists, and works through photography that specifically captured the tactile and haptic characteristics of fiber and craft art. While the first catalogs were modest, black-and-white pamphlets, Grotta photographed the work with reference to scale and shape from the outset, and in the case of fiber art, a sensitivity to conveying the work’s organic and haptic qualities and unique materials. This approach allowed for an immersive

experience of the works, one that extended beyond the time and geographic limitations of the exhibitions.
As technology developed, the browngrotta arts catalogs were printed in four-color, grew in size, and came to include essayists and authors of stature. By 1998, ​Art of Substance​ (#21) included an essay by renowned architect David Ling and won an American Graphic Design USA Award. Last year’s ​art + identity: an international view​ (#49) was 156 pages and featured the work of more than five dozen artists with an essay by art scholar Jessica Hemmings, Ph.D.