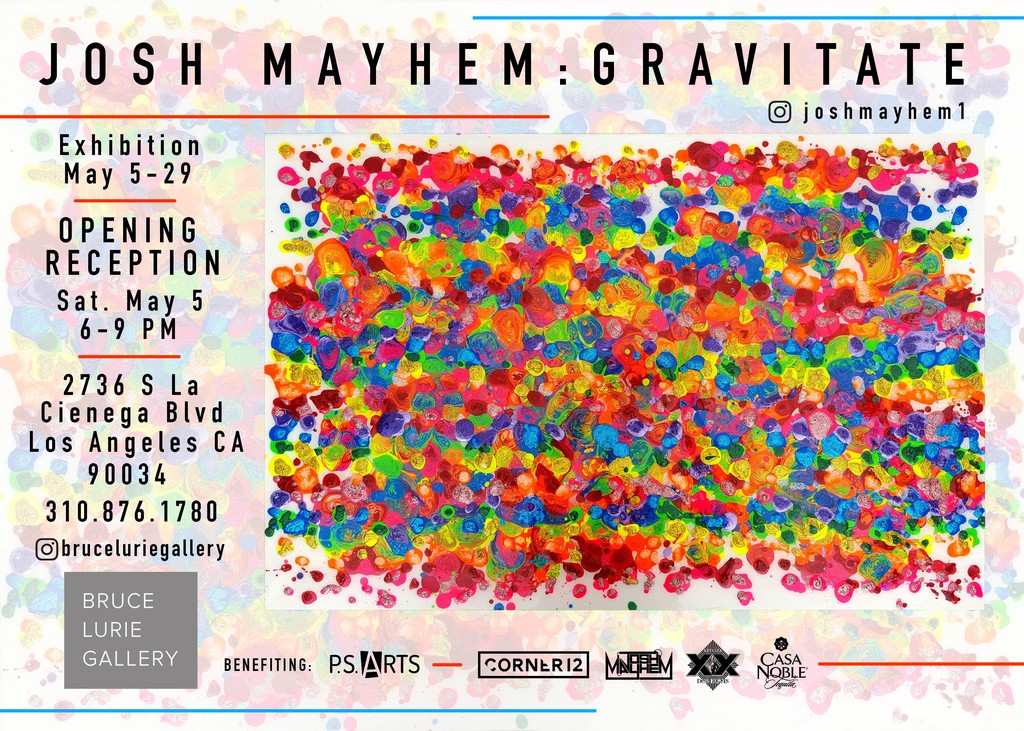 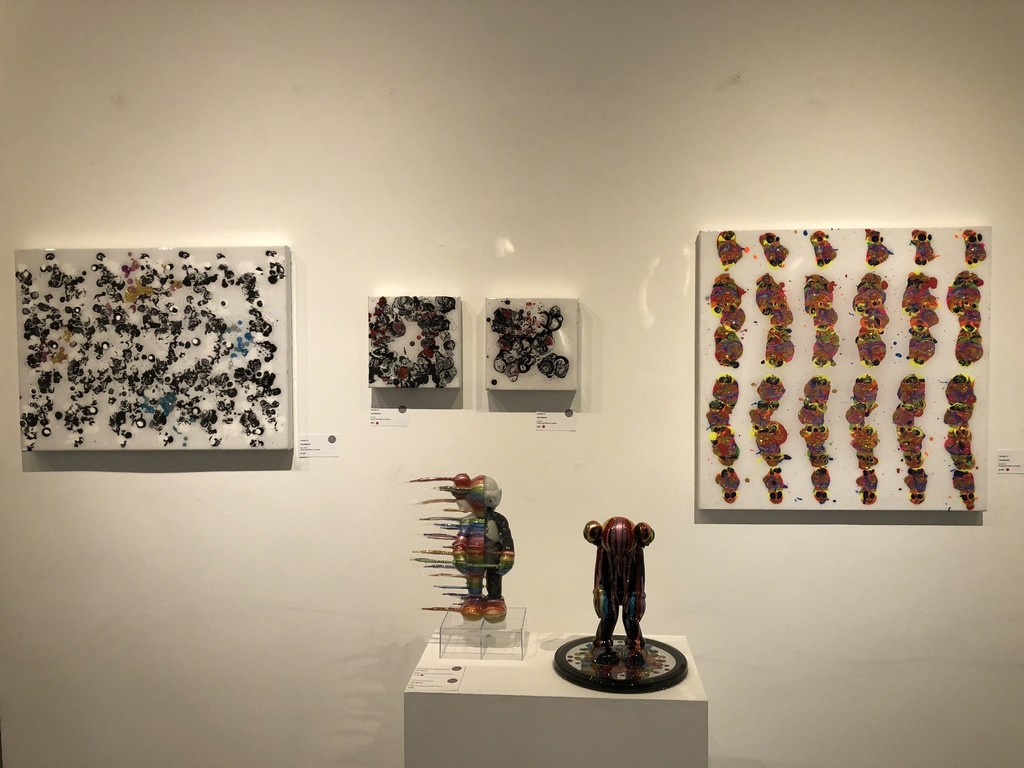 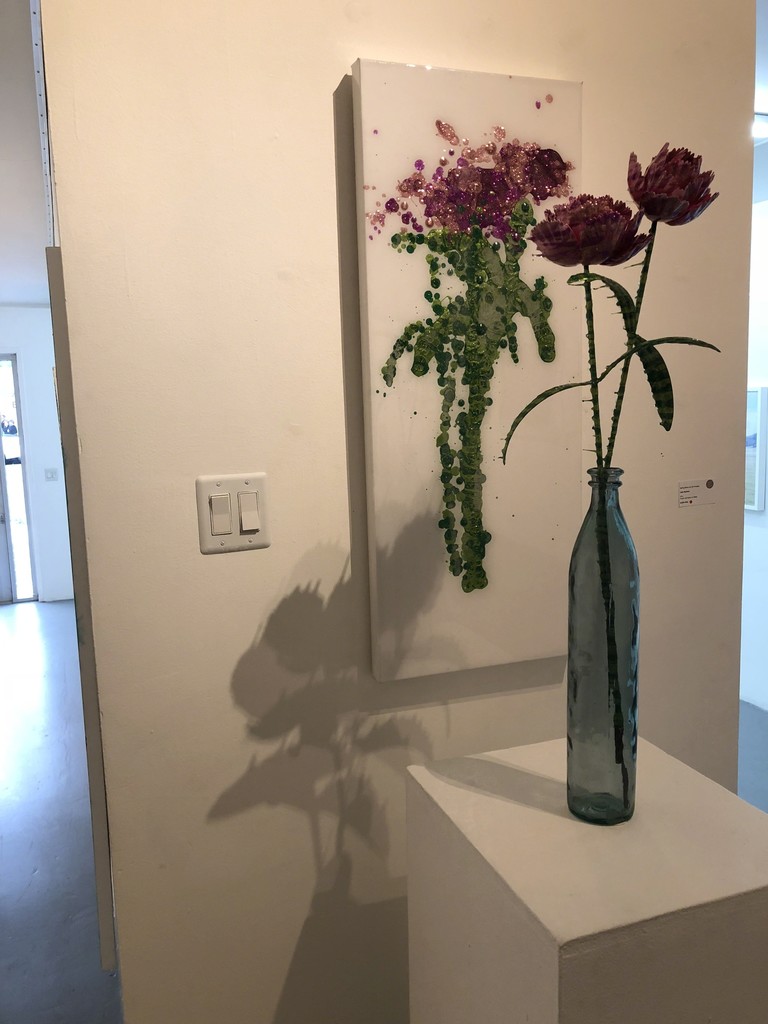 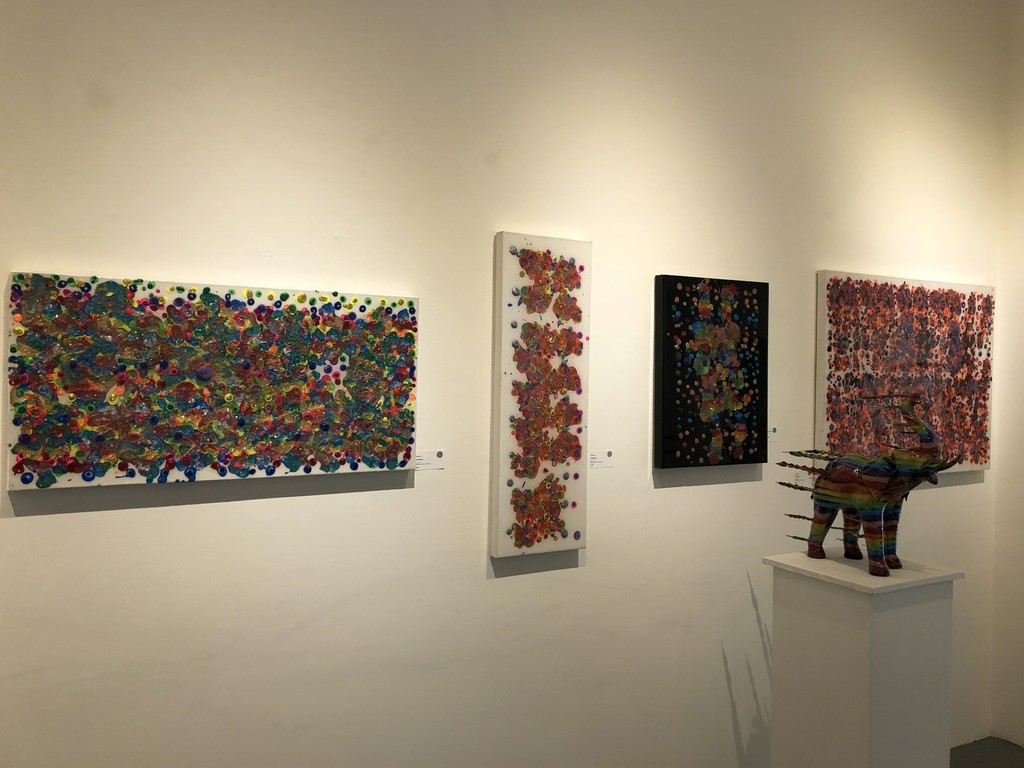 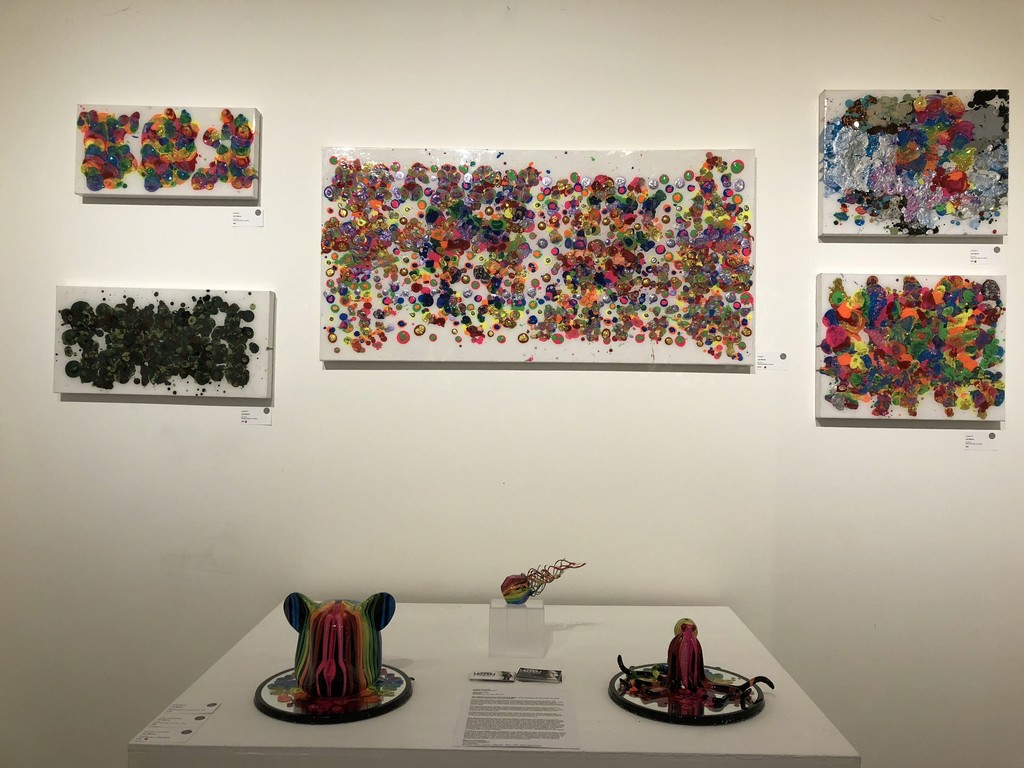 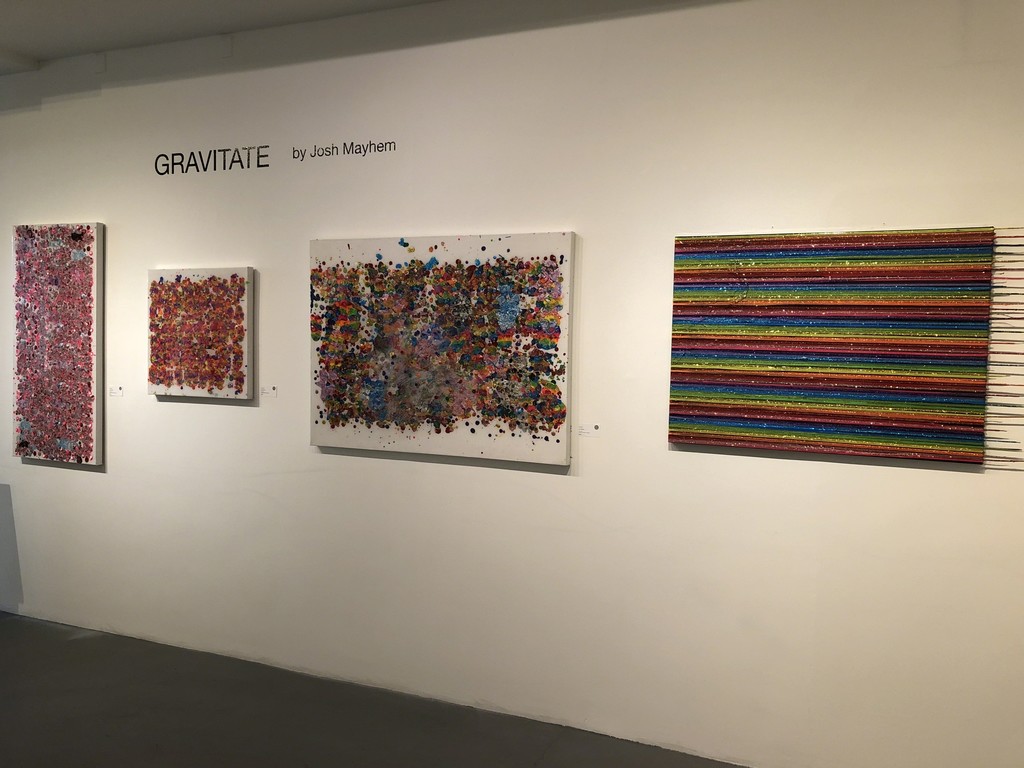 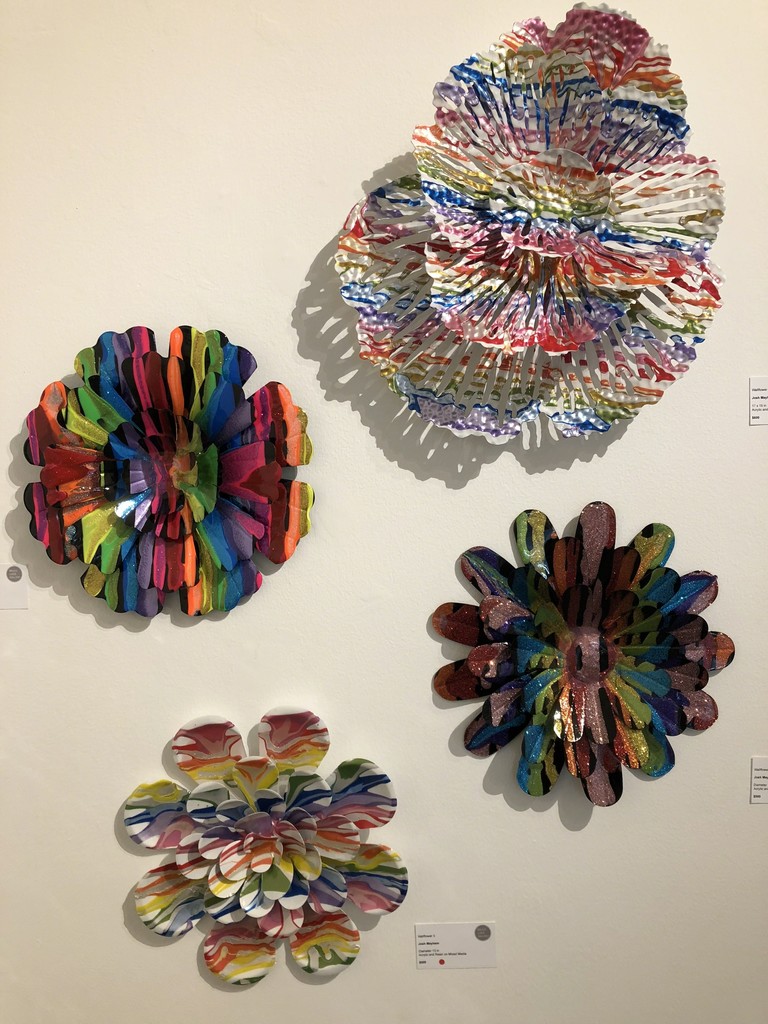 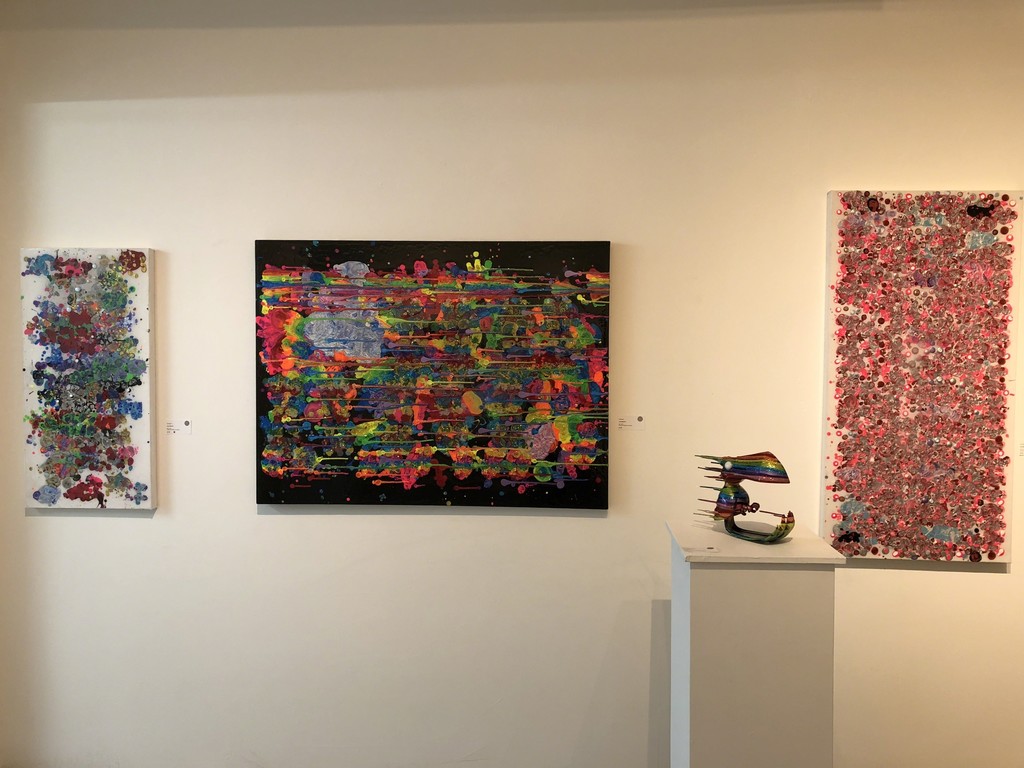 Over the past two years, in the process of creating his well-known sculptural works, Los Angeles-based artist Josh Mayhem has used dozens of gallery-quality canvases as drop cloths and as each became decorated with an accumulation of colorful drips, patterns began to emerge in the artist's mind. Augmenting each one with coatings of synthetic resin and additional painted splashes, these Gravitate series exude complexity through the floating effect the various layers create visually psychedelic in aesthetic, these Gravitate canvas works become more magical when one contemplates these as expressions of the Mayhem's subconscious. Similar to how automatic drawings manifest, the artist initially freed himself from rational control, incorporating chance into the process of their creation, allowing the random patterning to determine the direction of the finished works.

Having debuted the initial two pieces in this series at a Bruce Lurie Gallery hosted group exhibition late last year, Mayhem is proud to return to the space for a solo exhibition of these works. Consisting of roughly 30 canvas works in a variety of sizes, some are accompanied by a matching sculptural piece to inform the viewer of the work's full story. Josh Mayhem's lifelong habit of collecting children's playthings has fuelled his passion for transforming said toys into objects d'art. Embracing both order and chaos as inspiration points, Mayhem's mixed media 'art toys' tend to be created in two contrasting styles: intricate, detailed assemblages comprised of Japanese model kit parts, and more free-flowing, expressionist sculptures. Among his best-known pieces are those constituting his "Blown Away" series, in which mass-produced forms are covered in strands of resin and layers of acrylic paint to create gravity-defying drips that give the impression of the work being deconstructed by a strong wind. The popularity of this direction has led to Mayhem being nominated for Designer Toy Awards, participating in TRASHed: Art of Recycling at Coachella Festival, representation by the Corner12 agency, and continuing partnerships with the premiere worldwide creator and dealer of limited edition art toys, Kidrobot.