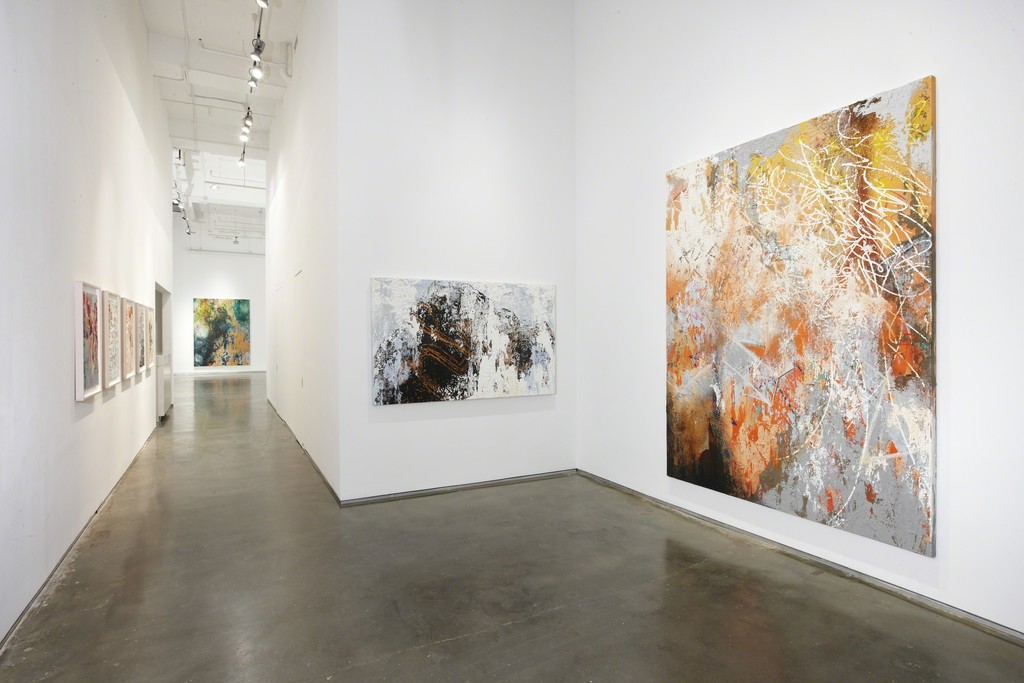 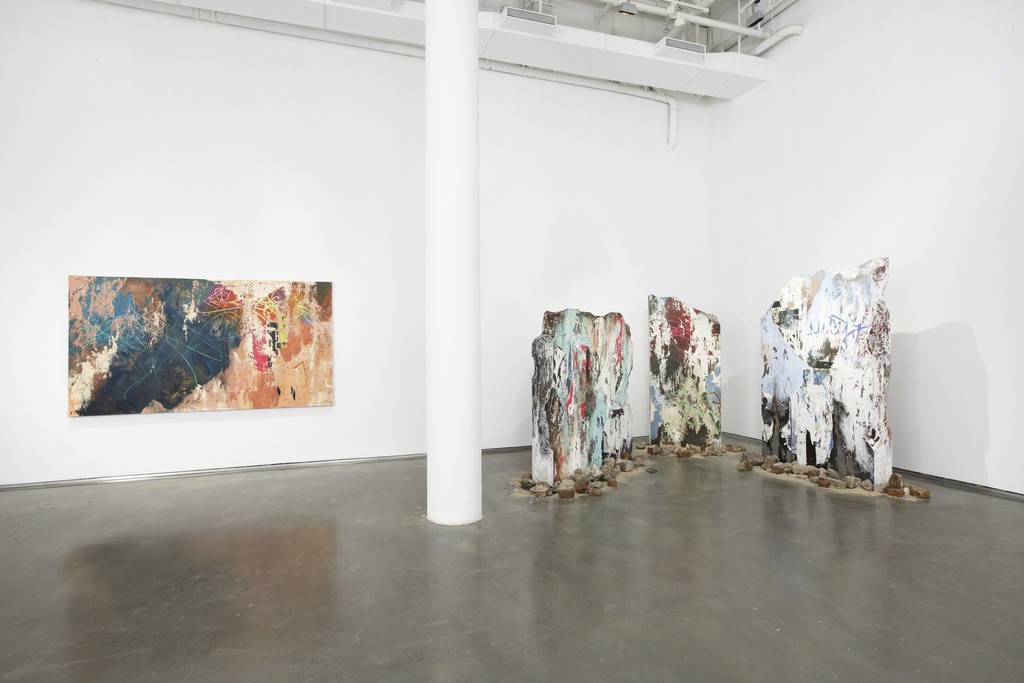 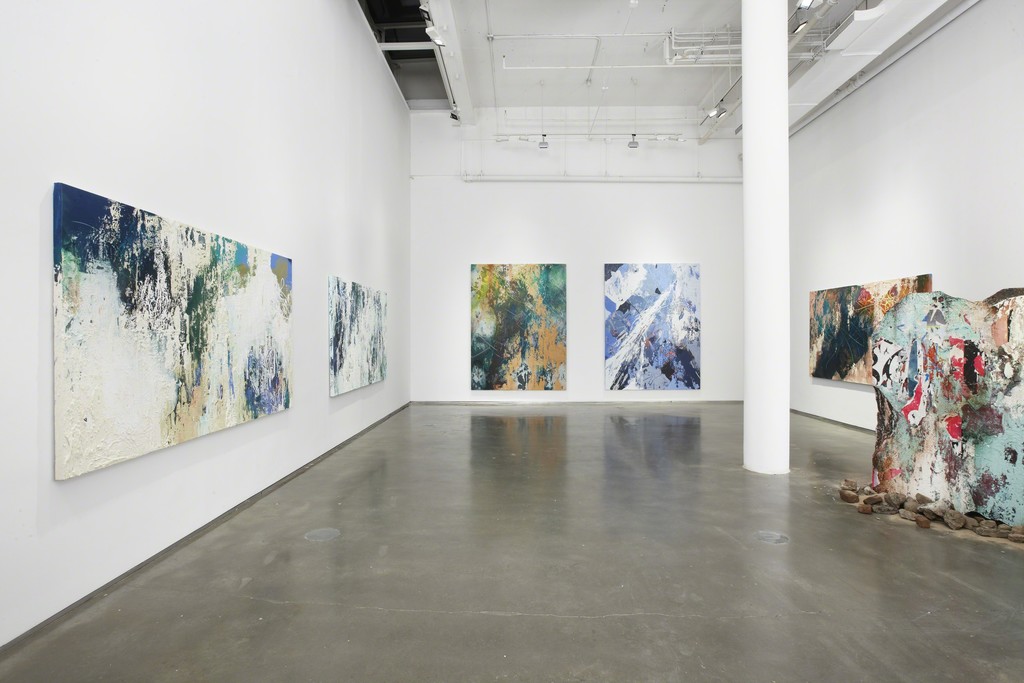 SURFACE BODY / ACTION SPACE is the third solo exhibition of Brooklyn based artist José Parlá with Bryce Wolkowitz Gallery, which is proud to announce a collaborative two-part exhibition for the first time with Mary Boone Gallery in Chelsea. José Parlá has emerged as one of the most innovative painters of his generation, having spent decades establishing a unique style that transmutes the language of cities worldwide. Parlá’s experience, from 1980’s Miami, to friendships with legendary artists of the 1970’s and 1980’s New York scene, adds a potent and personal undercurrent to his painterly engagement with the history of American Abstract Art.

In Surface Body / Action Space, Parlá produces exuberant paintings and sculptures that historicize the duality of his identity and contextualize his work in Neo-Expressionism and Realism. The artist allegorizes painterly gesture of texture as the body and form of the works, and writing gesture as a performance aspect. Both paintings and sculptures depict political connections between the body as government and its extremities as the people.

In this exhibition, Parlá investigates the history of 20th century painting and its impact on the duality of his Cuban American heritage. His investigations link the historical perspective of painters like Cuban artist Wifredo Lam, the American Abstract Expressionists Clifford Still and Cy Twombly, the international Italian artist Mimmo Rotella, Turkish artist Burhan Dogançay, and the Spanish painter Antoni Tàpies. Inspired by Gustavo Pérez Firmat’s seminal book, Life on the Hyphen, Parlá explores the idea of erasing the hyphen between the two words Cuban-American, which are two worlds in one in Parlá’s own experience. As the artist states:

“The title and concept of Surface Body / Action Space serves as a metaphor for the language of my new paintings and sculptures. The works negotiate two, sometimes four modes of thinking, linking artistic process to philosophy. Being that they are psycho-geographical in nature, I explore the crossroads of life on the hyphen between Cuba and the United States. In the works designated as Surface Body, I contemplate wall structures, cities and the State as being political borders, with opposing polarities, whereas Action Space employs a fast calligraphic mark, in juxtaposition with vast spaces of color significantly symbolizing personal freedom. The static contrasts in the works cause compositional interruptions, depicting blurred political lines, while illustrating a focus on the tension between maximal and minimal approaches in abstract painting. For me, Abstraction is boundless and is one of the greatest tools to interpret the human condition.”

José Parlá (1973) lives and works in Brooklyn, New York. He exhibits internationally, most recently as part of the 2015 Havana Biennial in May. Parlá’s major commissions include One World Trade Center, the Barclays Center, the Brooklyn Academy of Music’s BAM Fisher building and the James B. Hunt Jr. Library at North Carolina State University by the architectural firm SNØHETTA. In 2012, Parlá collaborated with French artist JR and exhibited Wrinkles of the City – Havana, Cuba at the 11th Havana Biennial. During February of 2015 Parlá opened his solo exhibition Segmented Realities, at the High Museum of Art in Atlanta in dialogue with Wifredo Lam’s retrospective: Imagining New Worlds. In conjunction with the two exhibitions Surface Body/ Action Space at Bryce Wolkowitz Gallery and Mary Boone Gallery, Parlá’s outdoor installation of new sculptures opened on July 30th at The Standard Plaza at The Standard, Highline in New York City.

Parlá’s work is in the permanent collections of the Albright-Knox Art Gallery in Buffalo, New York; The British Museum, London; the POLA Museum of Art in Hakone, Japan; and the Burger Collection in Hong Kong.

A catalogue will accompany both exhibitions.