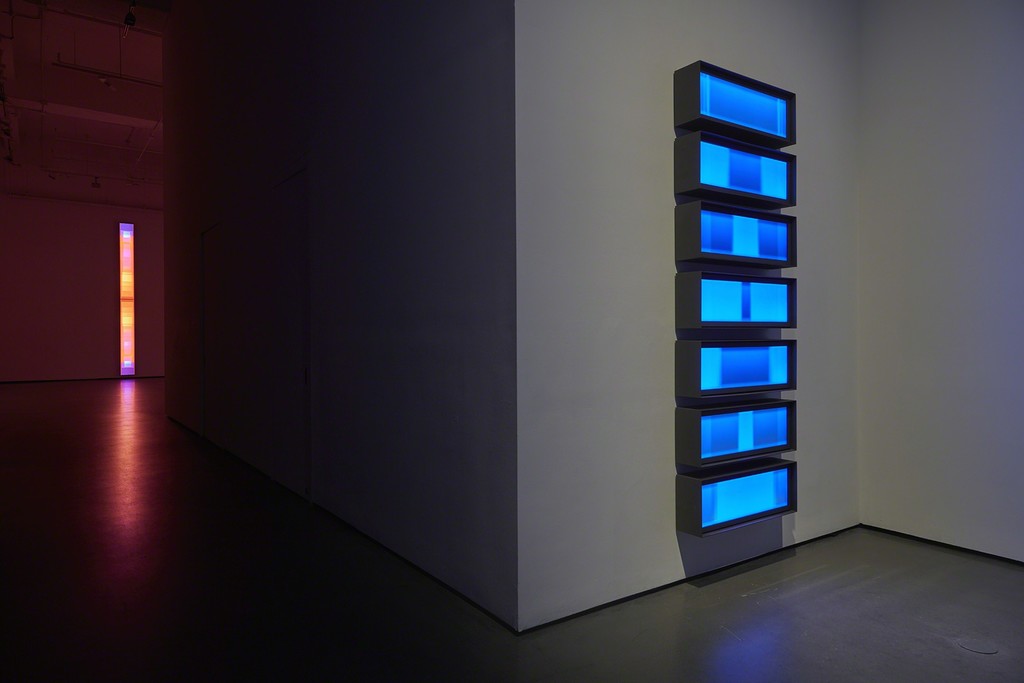 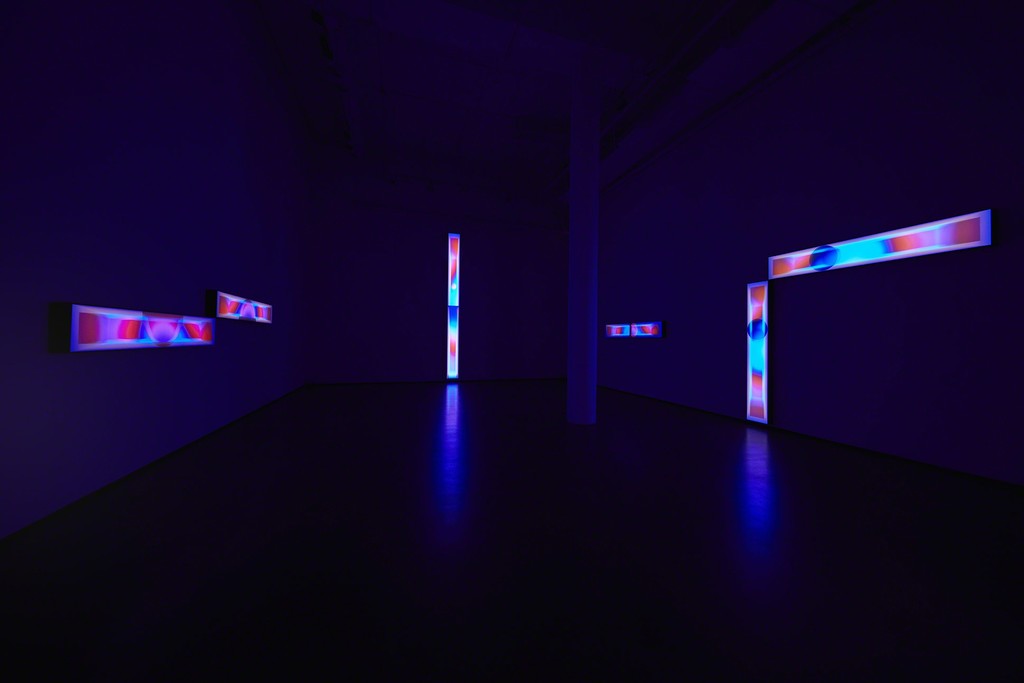 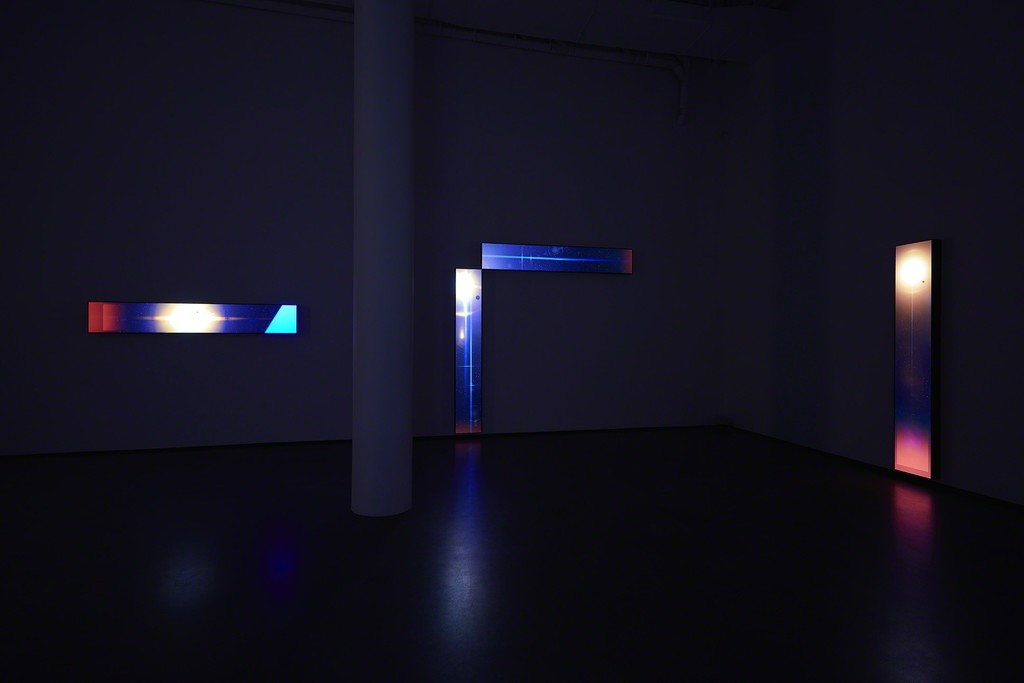 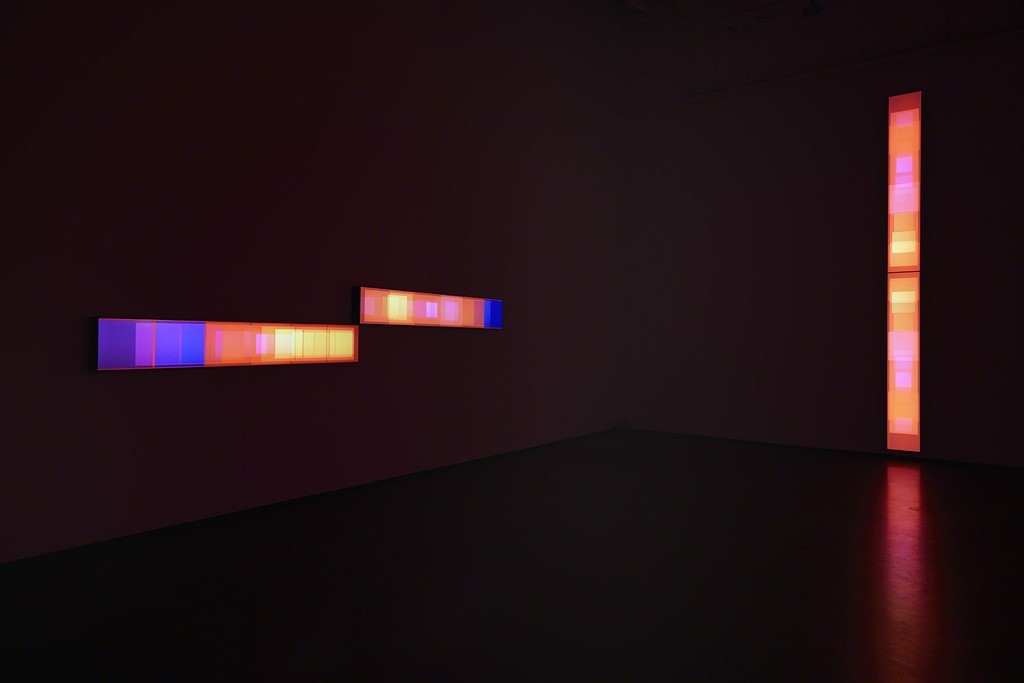 Bryce Wolkowitz Gallery is pleased to present Conjugated Gradients, its second exhibition of work by Los Angeles-based artist, Yorgo Alexopoulos, on view from April 26 to June 16, 2018.

In Conjugated Gradients, Alexopoulos composes and choreographs unique animations of liquid color in a persistent state of flux and dissolution. Clusters of varied hues and tonalities endlessly morph and recombine to suggest a decision-making process which is intuitive yet definitive, straddling both calculated risk and willful intention to arrive at a uniquely personal abstract language. A hushed, intermittent soundtrack plays at a low frequency during key intervals in the loop, underscoring the theme of a runic geometry passing through various stages of its life-cycle.

Alexopoulos’ formal vocabulary, reminiscent of the primary, Euclidean simplicity found in Josef Albers’ series, Homage to the Square (1949), depicts a fundamental tendency toward the reduced and archetypal. This distilled visual grammar is then deployed by Alexopoulos across multiple screens which are either stacked, adjacent, perpendicular, or otherwise similarly arrayed in spare, totemic formations within the gallery itself. Encounter and apprehension are on equal footing in Conjugated Gradients; thus, the proximity and scale of physical objects in relation to each other, looms large in Alexopoulos’ sense of ordered arrangement.

Activation of space is paramount to Alexopoulos, but never in a generalized, normative way; as such, the artist synchronizes every screen into a single, unified field by which his animation then simultaneously unfolds across all four gallery walls. A black circle, edge-to-edge within the perimeter of a single screen, passes slowly across a horizontal plane, rendering the depth of the gallery more palpable, if not our own experience of it. Likewise, a series of faintly blinking rectilinear forms, invoking diaphanous, multi-colored lozenges, cascade both upwards and downwards on all vertical axes to complete the modernist grid orientation.

Echoes can be seen as well as felt in, for example, Barnett Newman’s iconic zips; Kenneth Noland’s circular target motifs; and, not least—in keeping with the artist’s rhythmic use of montage—Morris Louis’ proprietary staining technique, the organic and molten pours and resulting dissolves everywhere evident in Louis’ most dynamic work.

Compression, transition, cadence, syncopation—these are the operative words when discussing the techniques and strategies driving Alexopoulos’ new abstract grammar. Can the meaning of color be grasped? Alternatively, can the color of meaning be coaxed into lived experience? Brought into the white cube and felt, as one might feel the earth’s gravity, sense the hauntological ghosts behind every trace of light, any optical phenomenon. (next page)

Yorgo Alexopoulos’ moving-image works—atmospheric hybrids of video & sculpture—have been publicly presented and permanently installed in the Langham Hotel, Chicago, originally designed by Mies van der Rohe for IBM, the Cosmopolitan Hotel's lobby in Las Vegas (both commissioned by Art Production Fund); and in the sky-lobby of the Norman Foster-designed Bow Building in Calgary, Canada, to name but a few.

Alexopoulos’ work has been written about in Artforum, The New York Times, The Creators Project (VICE Magazine), Forbes, and Architectural Digest. A graduate of the School of the Art Institute of Chicago (BFA, 1995), he currently lives and works in both Los Angeles and New York.