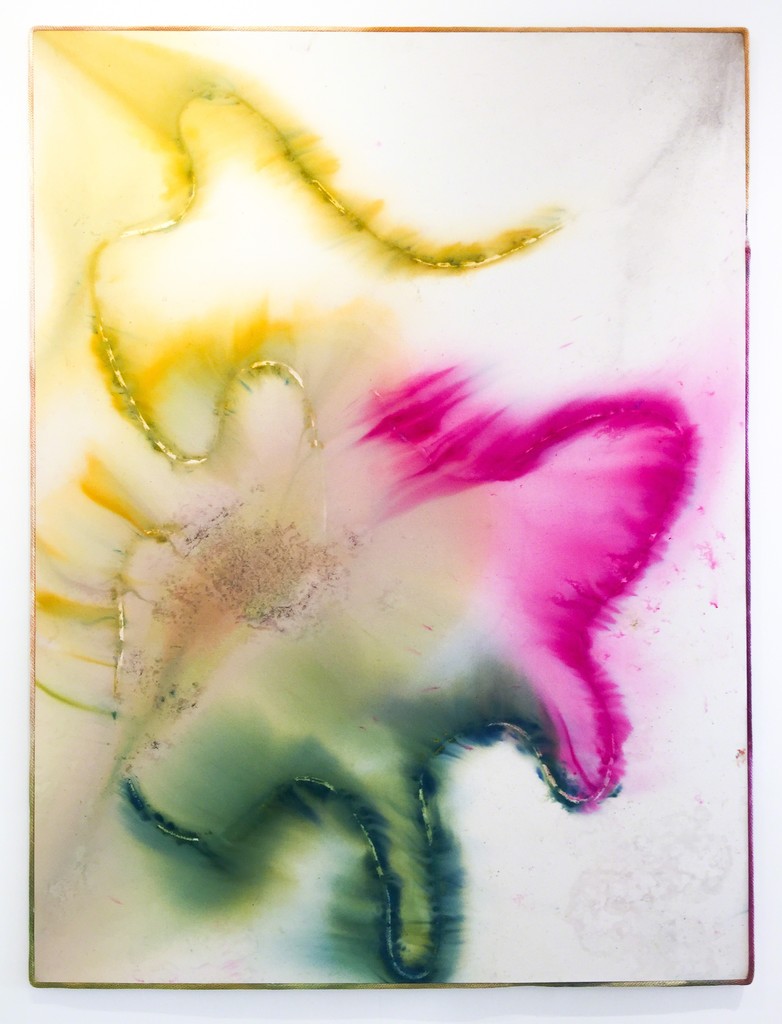 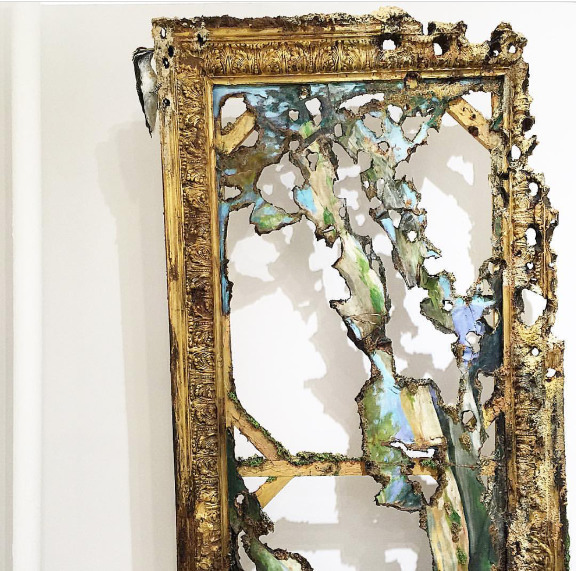 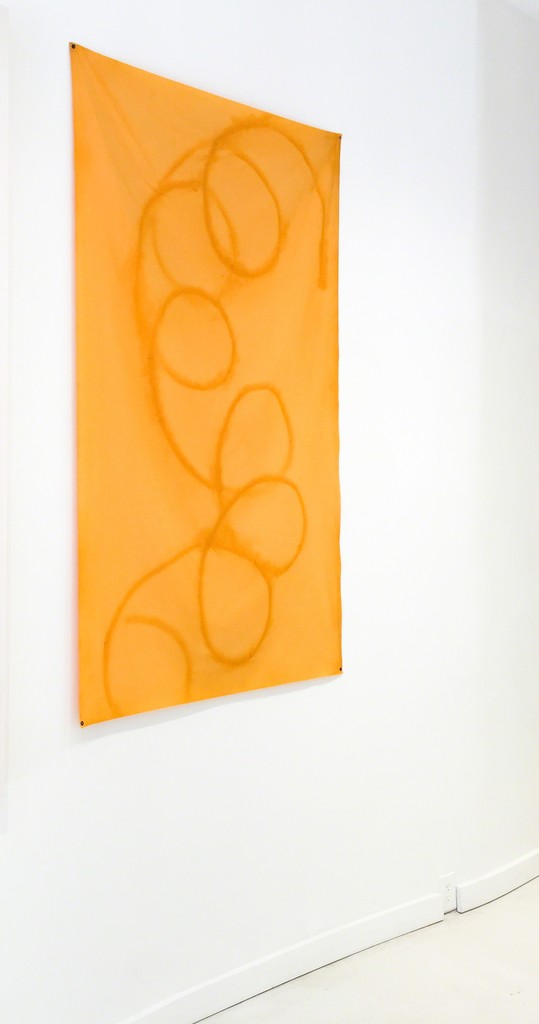 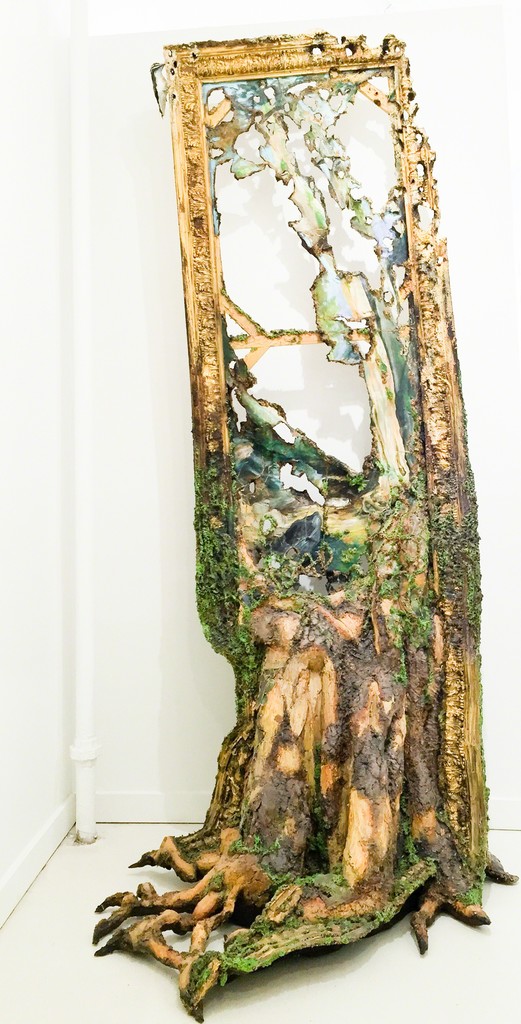 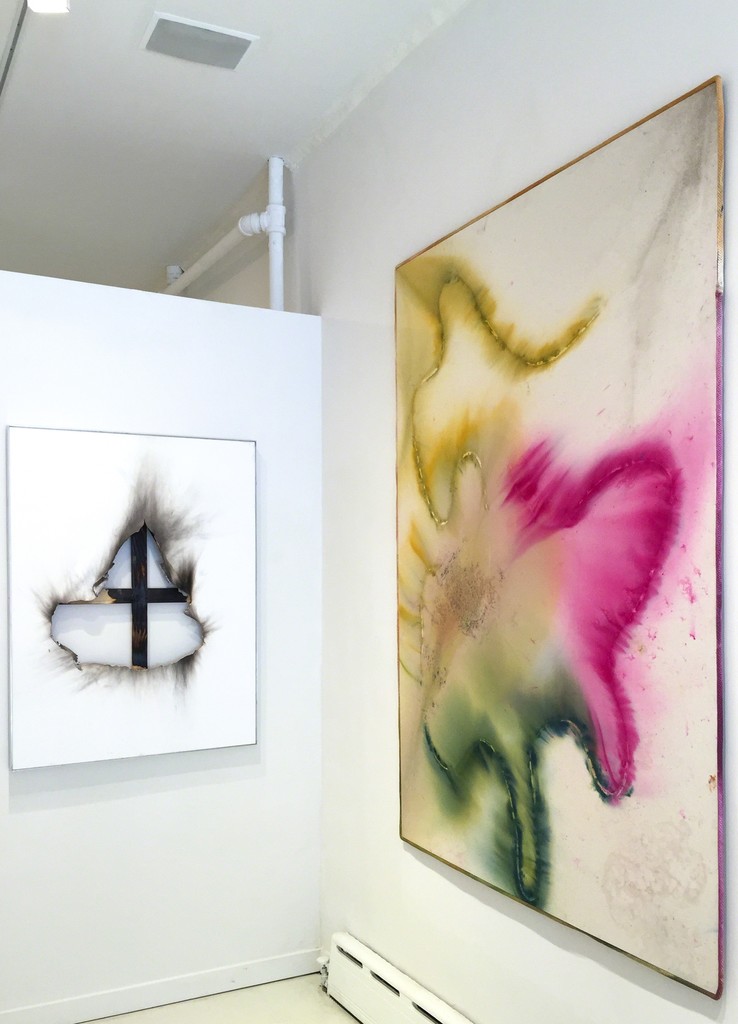 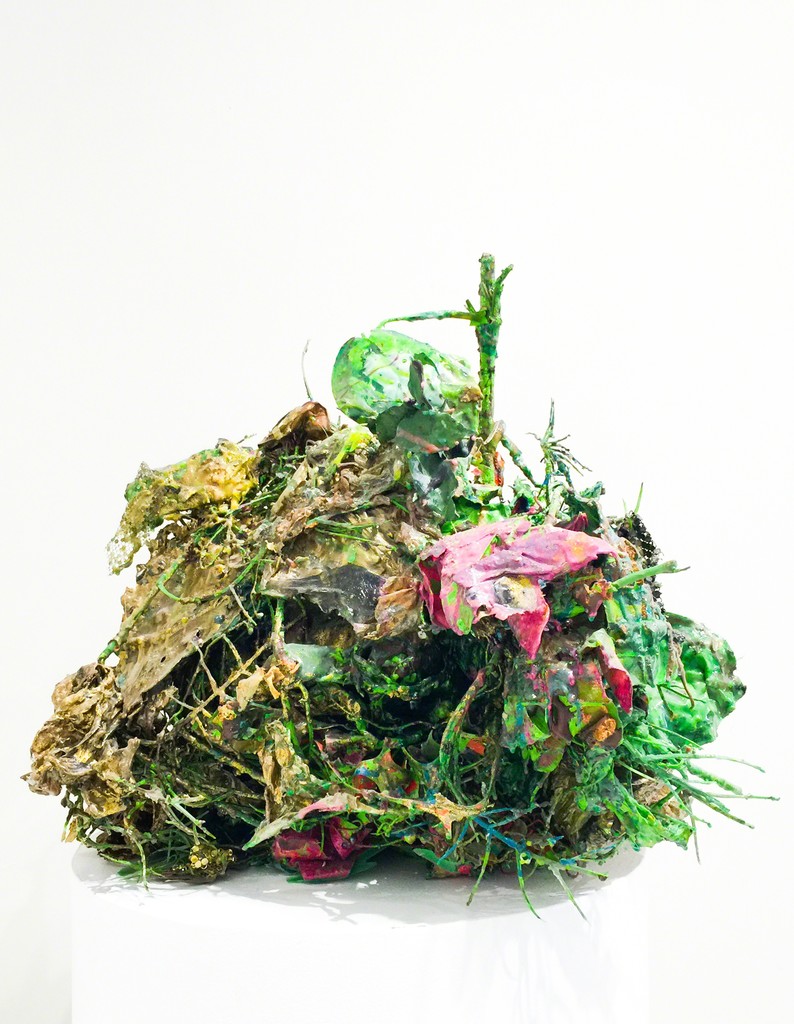 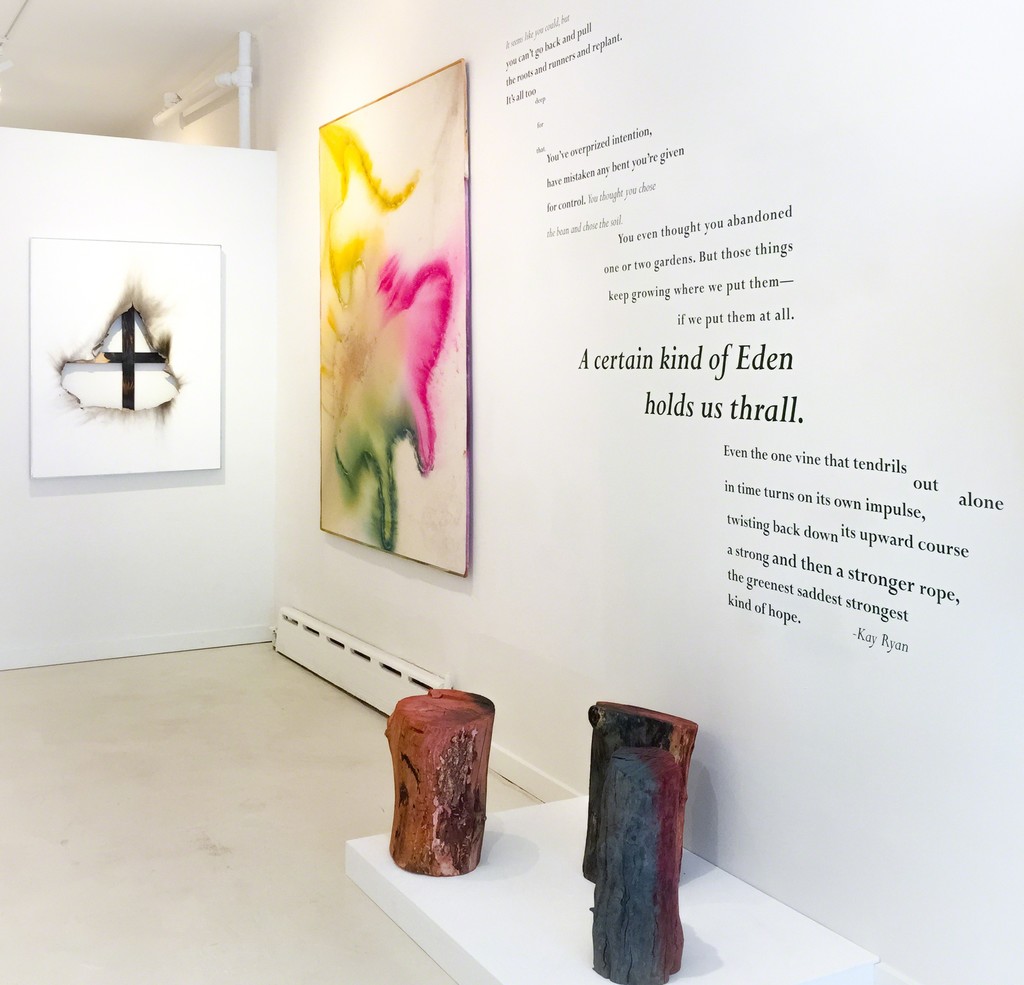 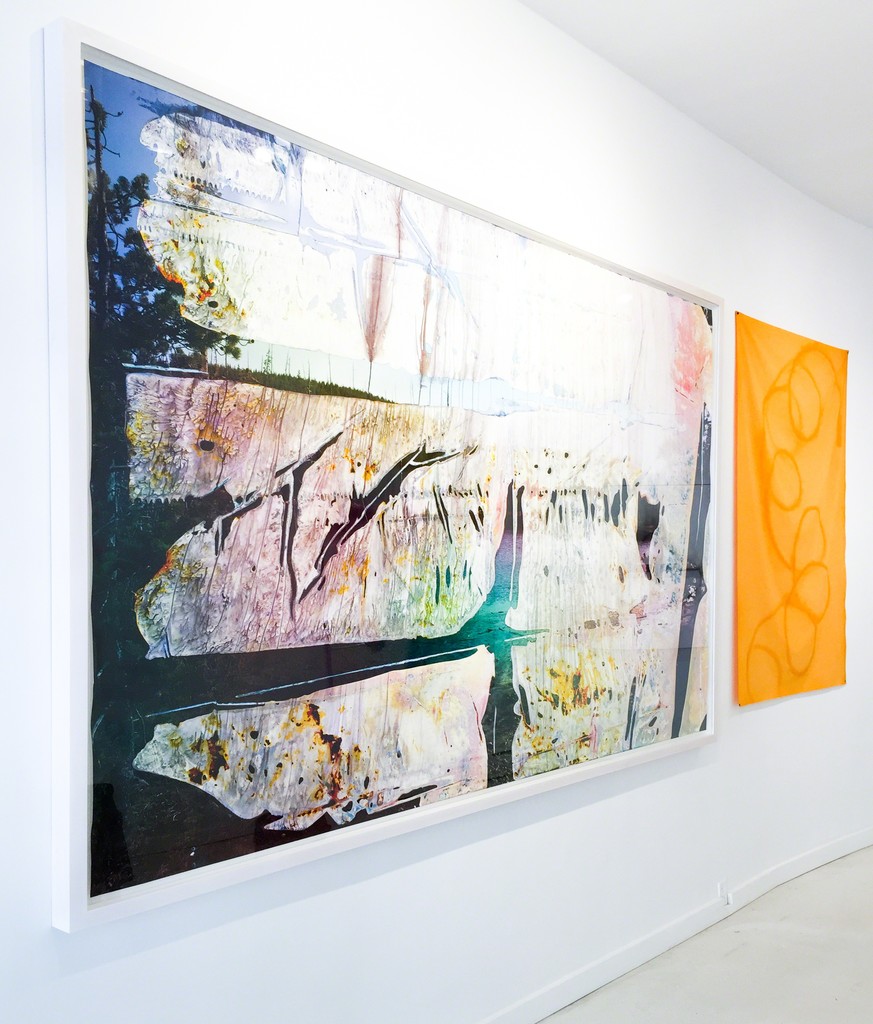 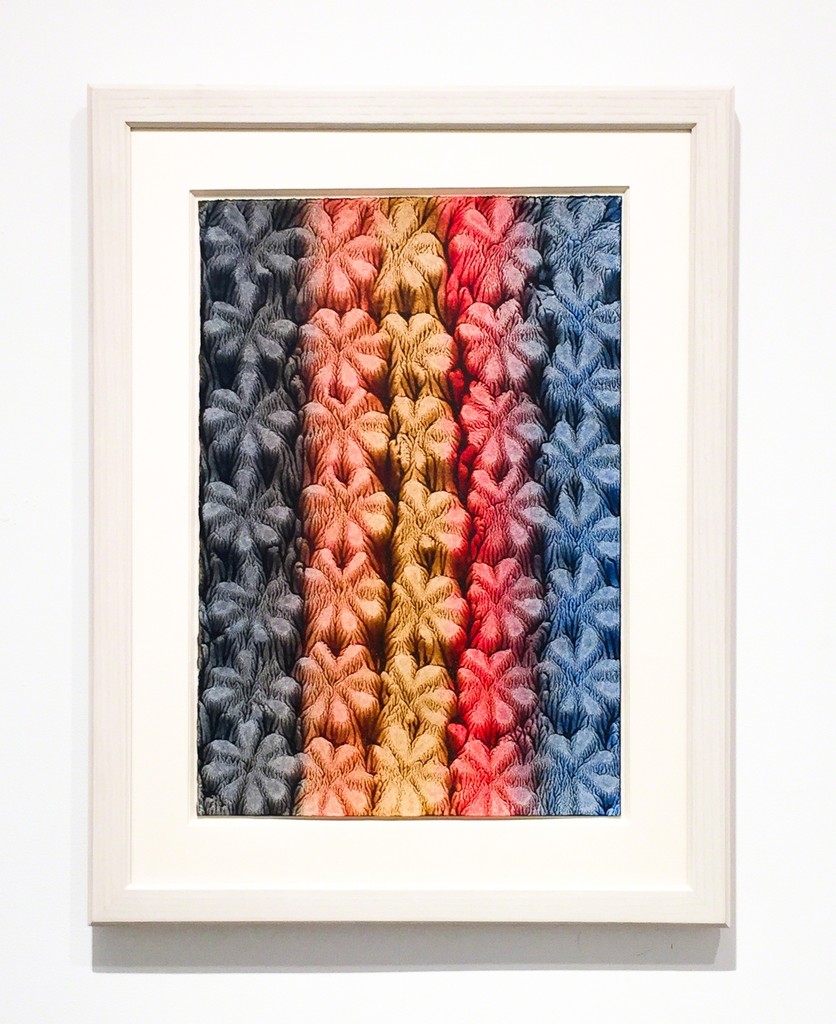 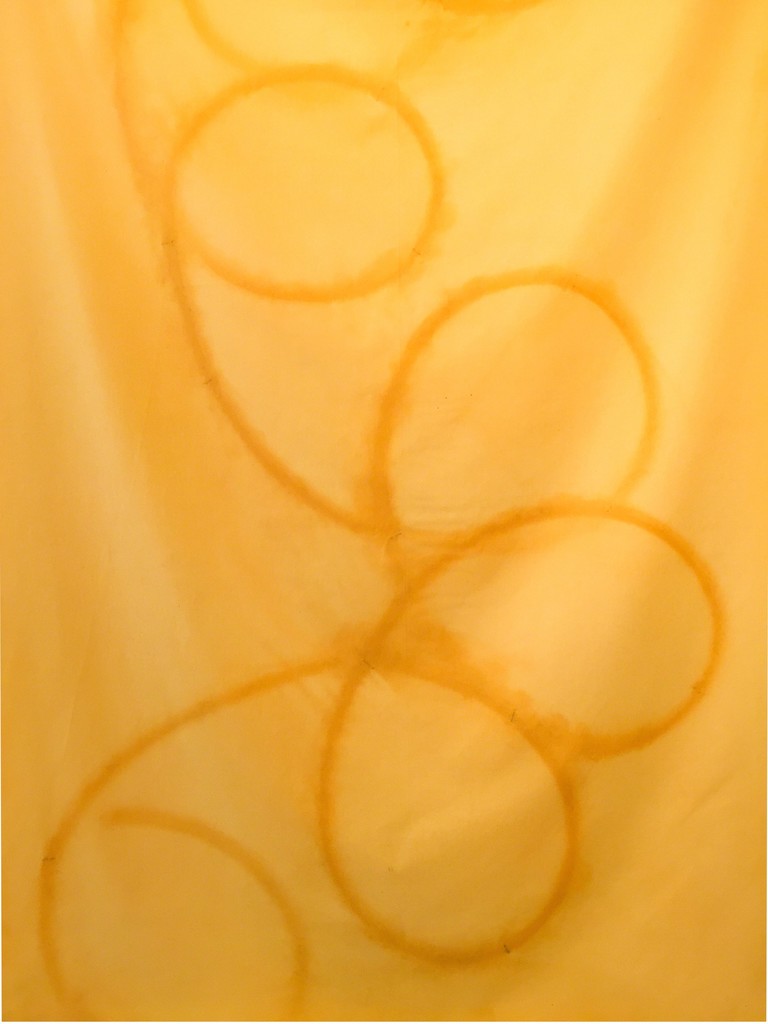 a certain kind of Eden

Burning in Water is pleased to present the group exhibition a certain kind of Eden, which addresses both the fragility and resiliency of the natural environment in the face of looming ecological threats. Works in various media by Matthew Brandt, Kadar Brock, Sam Falls, Valerie Hegarty, Cristina Lei Rodriguez, Kasper Sonne and Philip Taaffe are included. The featured artworks reflect a fragile equipoise between creation and destruction, evoking the dynamic equilibria underlying the biological, environmental and climatic systems that facilitate life. Nearly all of the works in the show involved direct exposure to environmental phenomena as a fundamental element of their production, thereby directly implicating such natural forces into the process of their creation and translation into material representations.

The exhibition is anchored by a large-scale sculptural work by Valerie Hegarty, Return to the Catskills (2008). With reference to the legacy of the Hudson River School of painting and the broader genre of the American landscape tradition, Hegarty’s work functions as a literal amalgamation of oil painting and natural elements. The idealistic, bucolic precepts of the 19th century American landscape genre are subverted by Hegarty’s evocation of decimation and ruin. Employing a “reverse archeological” posture, Hegarty uses a critical historicity to allude to the destructive consequences of 19th century expansionism. The landscape painting in Return to the Catskills persists, but only with its canvas in tatters, its supports exposed and its ornate, gilded frame nearly eroded away.

A similarly fraught, precarious vision of the natural resources of North America is captured in two monumental photographs from Matthew Brandt’s renowned Lakes and Reservoirs series. For these works, Brandt traveled across the western United States photographing threatened bodies of water. He simultaneously collected water samples from each site that he photographed and subsequently used the actual water samples to develop the corresponding image. Prints were soaked for days, weeks, and even months in lake water, allowing the properties of the lake water samples to alter the formation of the images. Simultaneously beautiful and enigmatic, Brandt’s work builds upon the legacy of photographers of the American West such as Ansel Adams and Carleton Watkins. By implicating the physical characteristics of the natural features he is recording into the process of image production, however, Brandt integrates both site-specificity and manifestation of the physical state of his subjects into his work.

Site-specificity and the transmutation of environmental forces into images are also hallmarks of Sam Falls’ art. Rain, sunlight, and dew are some of the natural elements that he has used to create artworks whose identities are inextricably linked to the place and time of their creation. For his photogram-like paintings, Falls uses natural materials from the local environment in which he is working. Falls’ methods evoke the 19th century “photogenic drawings” of William Henry Fox Talbot and the cyanotype impressions of Anna Atkins, though Falls integrates both a broader span of environmental influences and temporality into his work. The works included in a certain kind of Eden were created using source material from the different locales: the ferns come from Falls’ childhood home in Hartland, Vermont; palm branches from his backyard in Venice, California; and the flowers and trees from the garden and woods around his home in upstate New York.

Danish artist Kasper Sonne utilizes elemental forces to create artworks, invoking the simultaneously imbricated and dichotomous processes of creation and destruction. In his Borderline and TXC series, Sonne begins with a meticulously applied ground, yielding a flat expanse of undifferentiated color. In his Borderline works, he then sets the canvas aflame—recalling the “fire paintings” of Alberto Burri and Yves Klein. Sonne carefully manipulates and shapes the burning process, sometime taking the canvases outside and using the wind to influence the pattern of incineration. The results are ethereal and haunting in their beauty, with the flawless painted surface intact around the periphery, a central void and a delicate penumbra of charred canvas with spectral renderings of smoke.

Cristina Lei Rodriguez creates sculptural renditions of lush environments that are defined by both her deft handling of materials and inclination towards the fantastical and eccentric. Rodriguez uses a range of discarded materials—plastic, resins, wire mesh, plaster, paint and random detritus—which are then compressed, crumpled, twisted and ultimately recapitulated as faux organic forms. Rodriguez’s sculpture Relic 1 from Greenhouse [Xanadu] (2001) echoes an underlying tension between natural and artificial by finishing the faux foliage-like objects with layers of glitter and a shiny glaze. Through a contradiction and balance of synthetic materials and representations of nature, Rodriguez’s work retains a simultaneous audacity and quiet beauty.

a certain kind of Eden is on view through June 4.