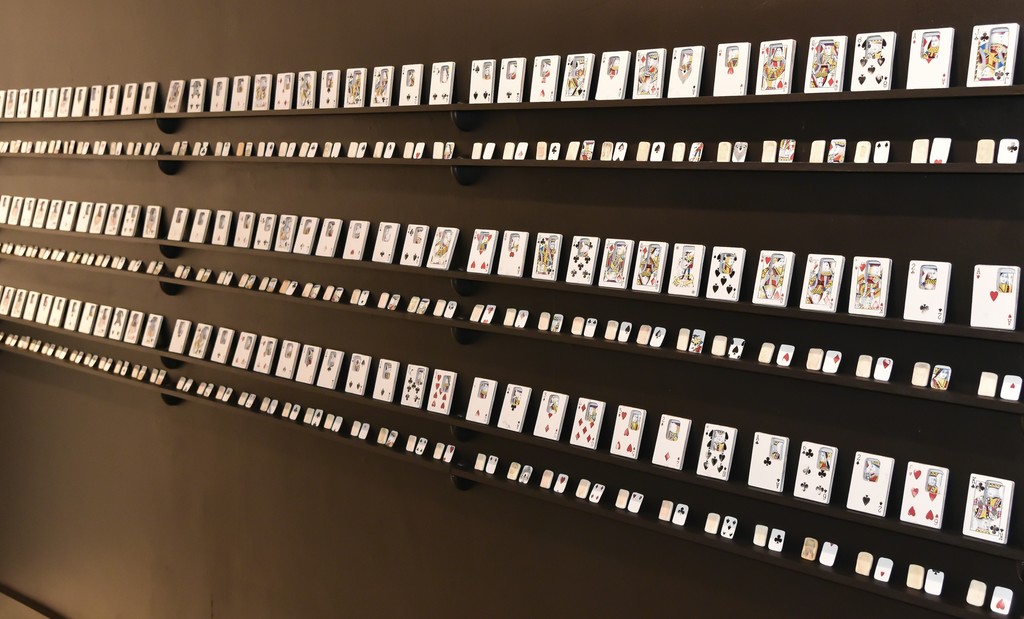 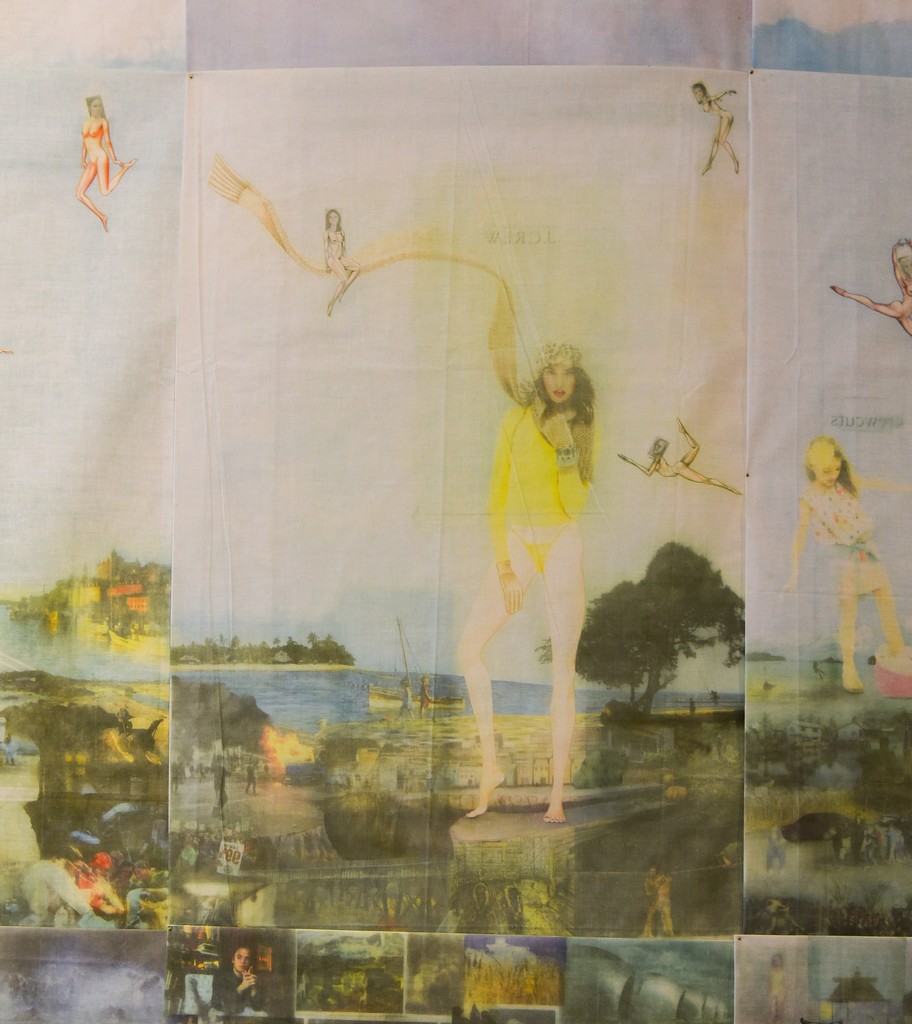 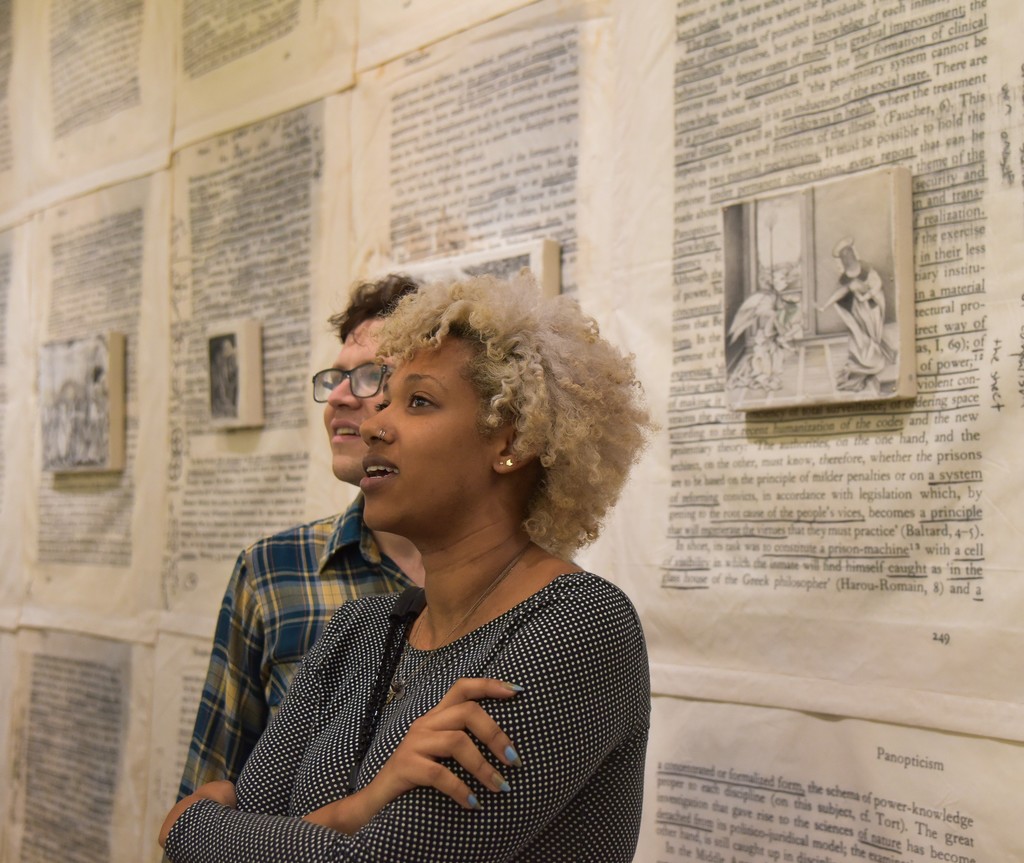 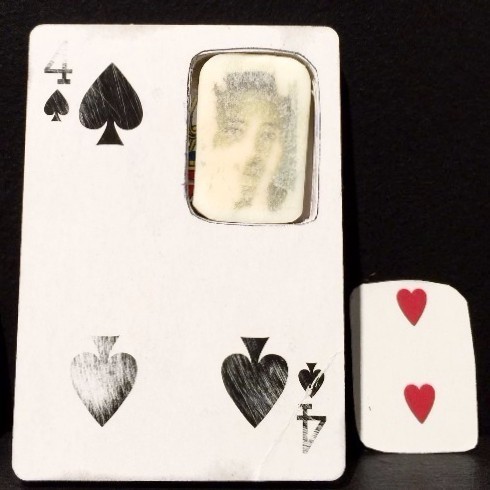 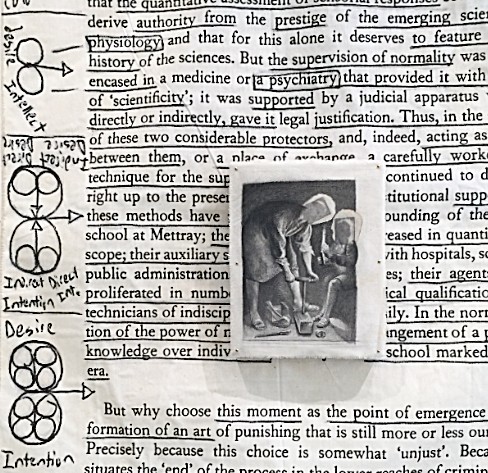 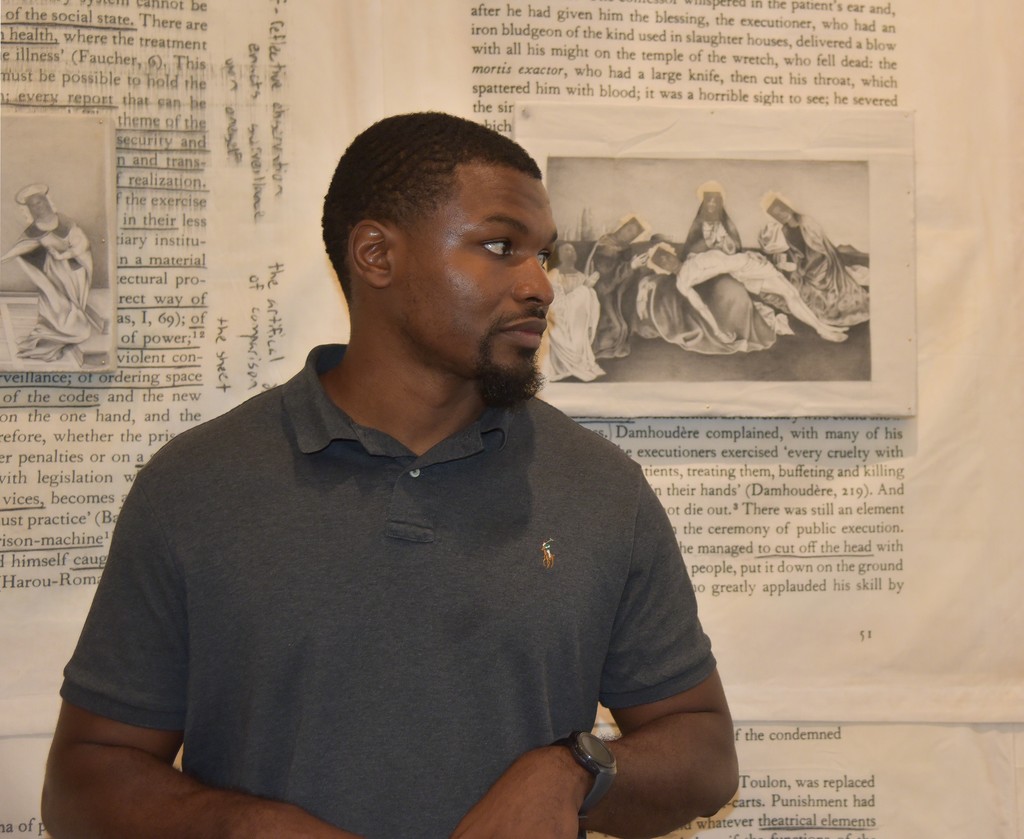 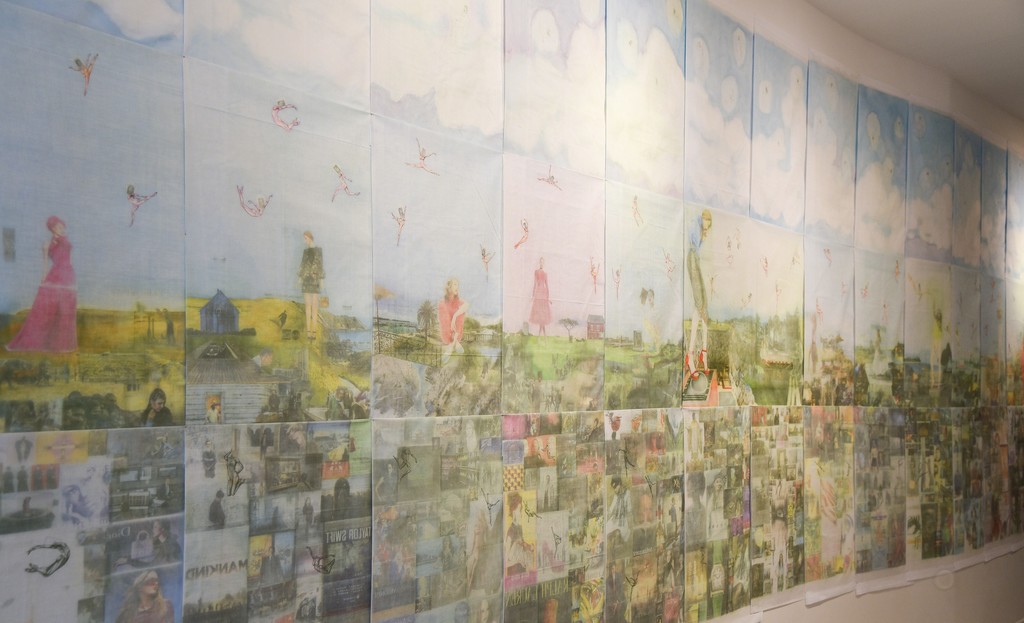 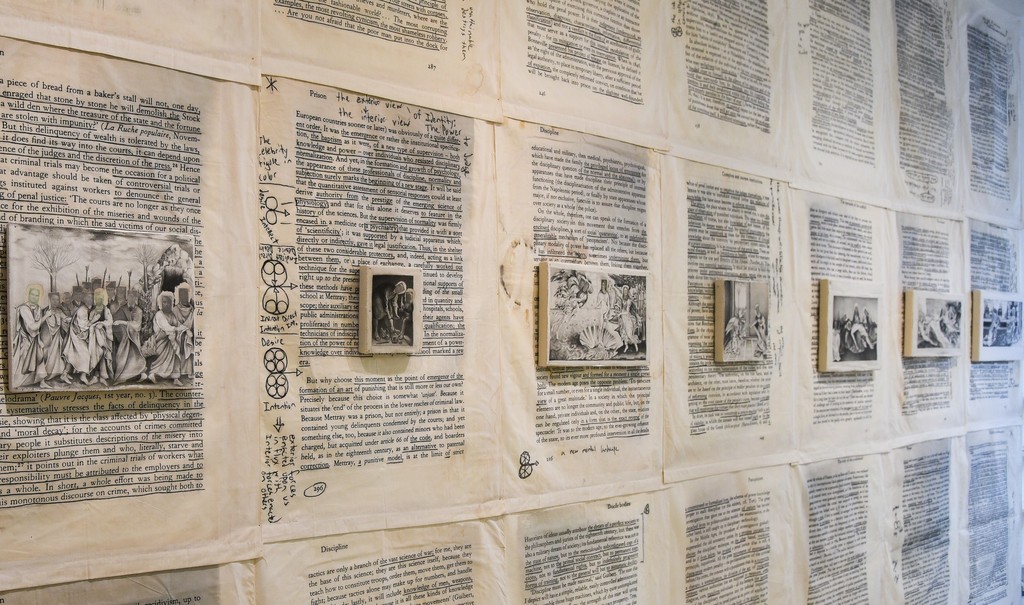 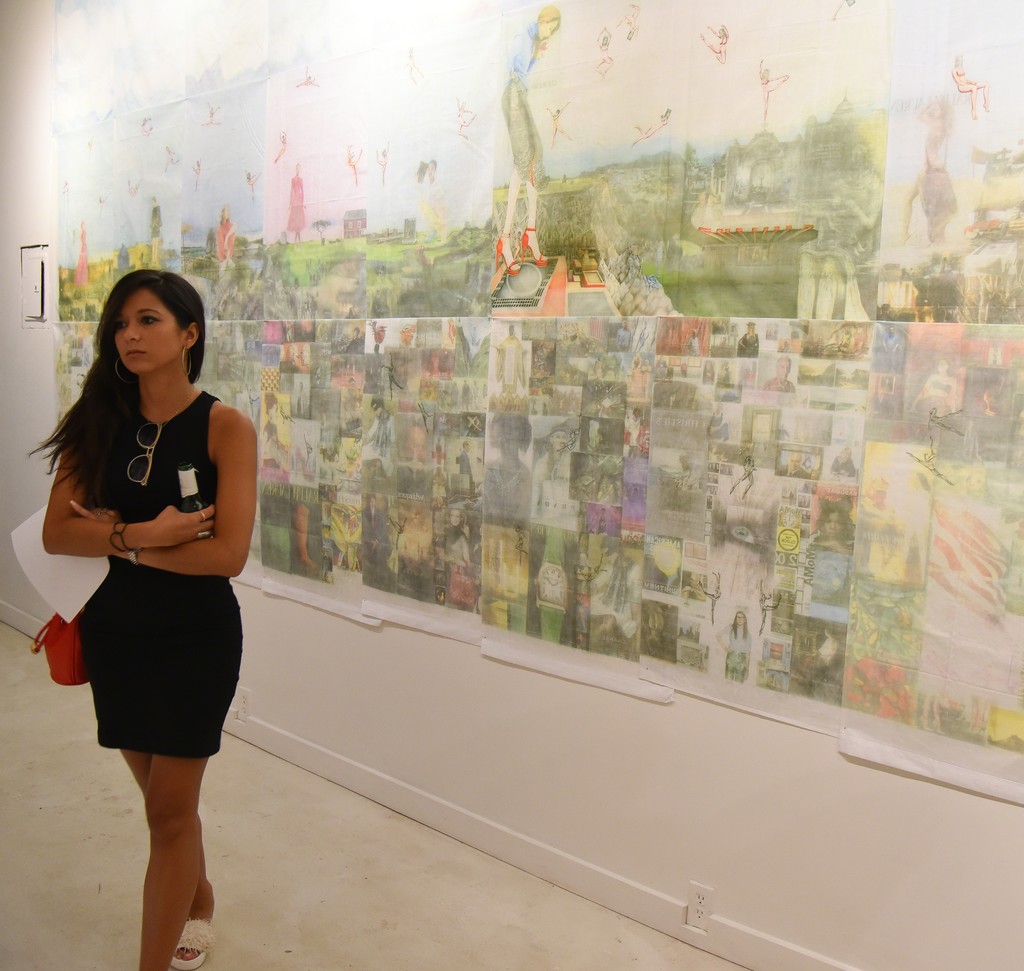 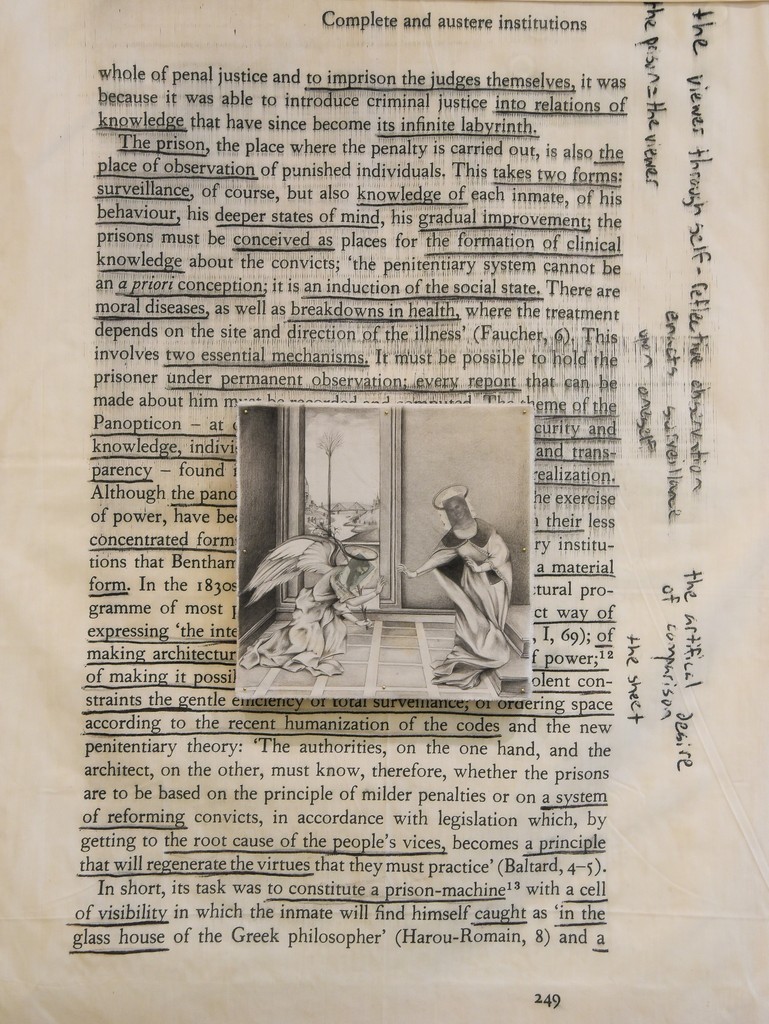 Burning in Water is pleased to present Marking Time in America: The Prison Works (2009–2013), the first solo gallery exhibition by artist Jesse Krimes. Marking Time in America features two comprehensive bodies of work that Krimes completed during a six-year period of incarceration for a non-violent drug offense: Apokaluptein and Purgatory. The exhibition is presented in collaboration with JustLeadershipUSA, a non-profit organization that is dedicated to reducing the U.S. correctional population by empowering those most affected by incarceration.

Krimes was arrested in 2009 soon after his graduation from art school. During his path through the American justice and penal systems, he continuously created artwork, devising complex methods of working with limited materials. Krimes completed the Purgatory series over his first year of pre-sentencing incarceration, during which time he was held in solitary confinement in a maximum security ward and “locked-down” in his cell for 23 hours per day. With no access to art materials, he began to create small portraits on bars of prison-issued soap by delicately transferring images from newspapers and periodicals. He fashioned an instrument using the positive terminal of a disassembled AAA battery to cut individual frames for each portrait from stacks of used playing cards that were passed to him by other prisoners. These playing card frames (composed of over 6,000 individual hand-cut playing cards) functioned both as integral parts of the artworks and vessels for concealment. Individual elements of Purgatory were smuggled out of the facility and mailed to an art historian friend with the assistance of other inmates who worked in the mailroom.

Although Krimes began the series by creating portraits from mug shots and crime-related photos, he subsequently began to include images of celebrities, politicians and other individuals based on the premise that each of us is some type of “offender.” The Purgatory series grew to encompass over 300 samizdat portraits, which Krimes subsequently assembled into one work upon his release five years later. Previously exhibited at the Palais de Tokyo in Paris, Purgatory is being publicly exhibited in its entirety for the first time in the U.S.

Following his sentencing, Krimes served an additional five years in prison, during which time he created his sweeping work Apokaluptein: 16389067. Painstakingly transferring individual visual elements from newspapers, periodicals and art journals onto panels cut from stolen prison bed sheets, Krimes created a monumental work in small increments of time coordinated with his highly-regimented prison schedule. Each image transfer, which Krimes performed using primarily a spoon and hair gel, took over 30 minutes to perform. Individual panels required over a month to complete.

Each small panel of Apokaluptein: 16389067 was smuggled out of prison in parcels mailed to family and friends. Although the work was produced in small fragments, Krimes envisioned and planned the entire organization and arrangement of the piece from the outset. Apokaluptein: 16389067 spanned over 40 feet when ultimately assembled following his release. On view in Marking Time in America is a slightly scaled-down version of Apokaluptein: 16389067, which Krimes meticulously recreated using digital transfers, hand-drawing and painting.

Whereas Purgatory employs discrete portraits with varying levels of detail to create an anthology of individual images that are variously realistic, spectral, ephemeral and impressionistic, Apokaluptein is a sweeping, complex phantasmagoria. Each of the work’s 39 panels recapitulates five distinct narrative elements. As a whole, Apokaluptein serves as an intricate visual mediation upon themes of identity, social stratification, institutional authority, desire, freedom and mortality.

In addition to Purgatory and Apokaluptein, Marking Time in America features selections from Krimes’ Masterworks series of drawings and image transfers on prison bed sheets along with a new series of work focusing on Krimes’ profound engagement with philosophical texts regarding freedom, punishment and social systems of containment during his incarceration.

A portion of the proceeds from Marking Time in America will support JustLeadershipUSA. This partnership continues Burning in Water’s commitment to purpose-driven contemporary art and its mission to collaborate with non-profit and community-based organizations to present projects that highlight the work of contemporary artists within the broader context of urgent socio-cultural, economic and environmental concerns.

Jesse Krimes (b. 1982, Lancaster, PA) lives and works in Philadelphia. His work Purgatory was exhibited at the Palais de Tokyo in Paris in 2015 as part of the exhibition Le Bord des Mondes. Apokaluptein: 16389067 was exhibited at the Zimmerli Museum of Rutgers University. Other venues in which his artwork has been shown include the Leonard Pearlstein Gallery of Drexel University and Amnesty International’s Art for Amnesty. Krimes is also featured in the Truth to Power exhibition coinciding with the 2016 Democratic National Convention in Philadelphia.

JustLeadershipUSA is a New York-based a non-profit organization that addresses issues related to mass incarceration through advocacy, policy leadership and member support. JLUSA empowers people most affected by incarceration to drive policy reform.