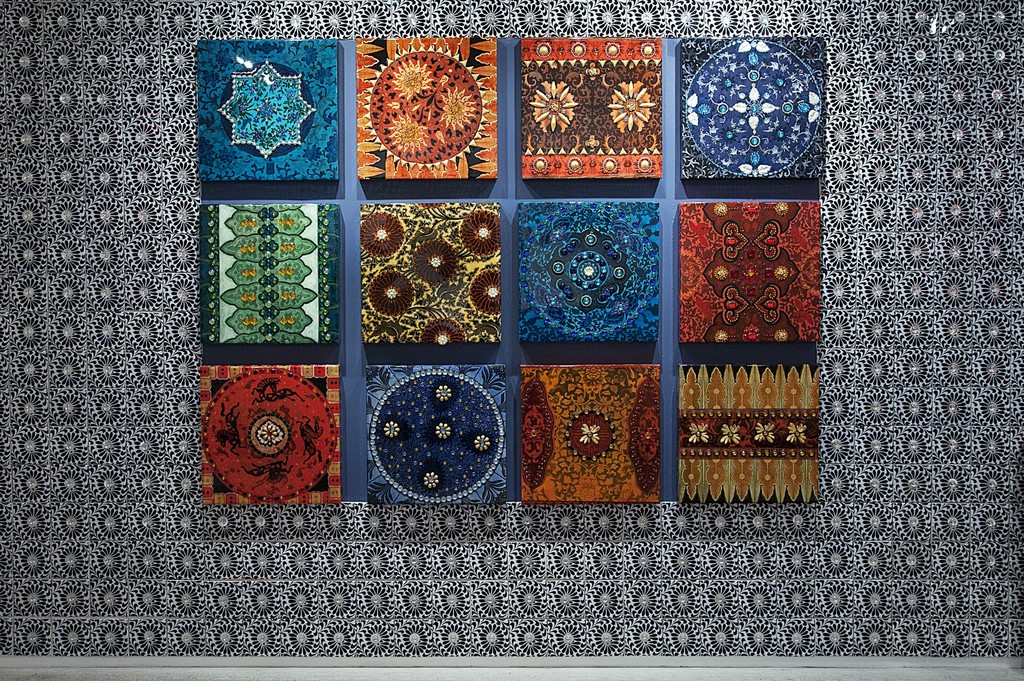 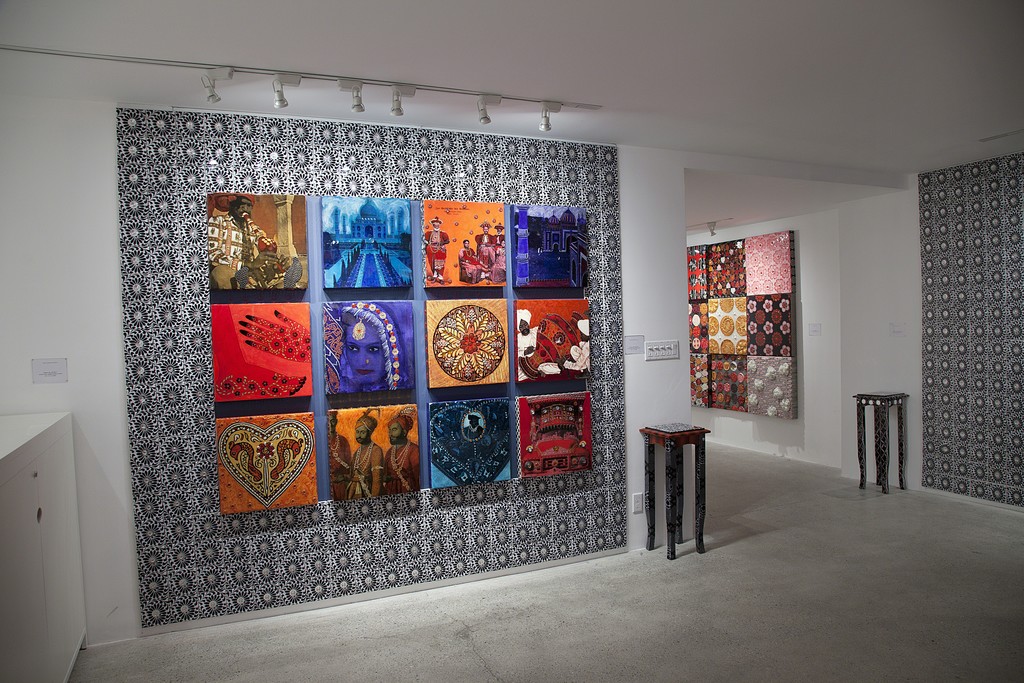 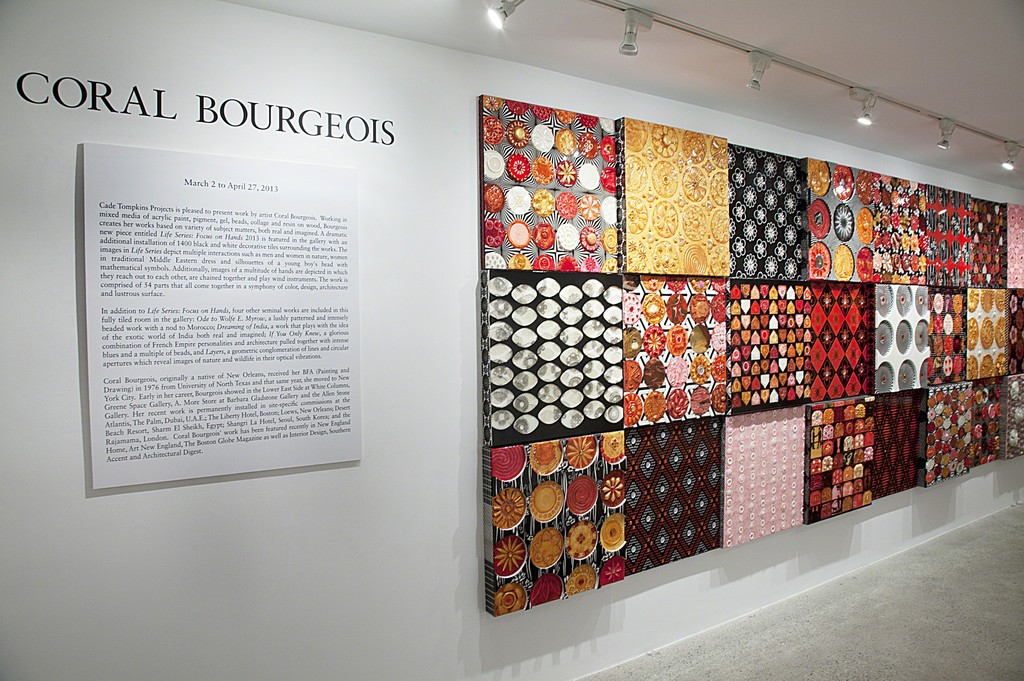 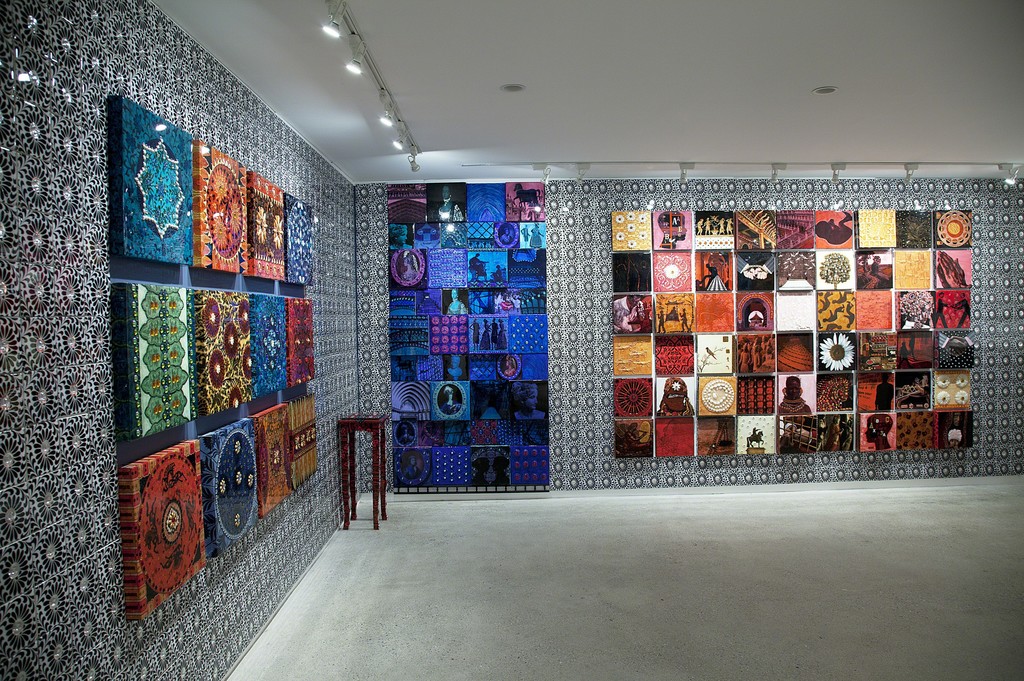 Cade Tompkins Projects is pleased to present work by artist Coral Bourgeois. A dramatic new piece entitled Life Series: Focus on Hands 2013 is featured in the gallery with an additional installation of 1400 black and white and decorative tiles surrounding the works. The images in Life Series depict multiple interactions such as men and women in nature, women in traditional Middle Eastern dress and silhouettes of a young boy's head with mathematical symbols. Additionally, images of a multitude of hands are depicted in which they reach out to each other, are chained together and play wind instruments. The work is comprised of 54 parts that all come together in a symphony of color, design, architecture and lustrous surface.
In addition to the Life Series four other seminal works are included in this fully tiled room in the gallery: Ode to Wolfe E. Myrow, a lushly patterned and intensely beaded work with a nod to Morocco, Dreaming of India, a work that plays with the idea of the exotic world of India both real and imagined, If You Only Knew, a glorious combination of French Empire personalities and architecture pulled together with intense blues and a multiple of beads, and Layers, a geometric conglomeration of lines and circular apertures which reveal images of nature and wildlife in their optical vibrations.
Coral Bourgeois, originally a native of New Orleans, received her BFA (Painting and Drawing) in 1976 from University of North Texas and that same year, she moved to New York City. Early in her career, Bourgeois showed in the Lower East Side at White Columns, Greene Space Gallery, A. More Store at Barbara Gladstone Gallery and the Allen Stone Gallery. Her recent work is permanently installed in site-specific commissions at the Atlantis, The Palm, Dubai, U.A.E.; The Liberty Hotel, Boston; Loews, New Orleans; Desert Beach Resort, Sharm El Sheikh, Egypt and the Rajamama, London. Coral Bourgeois' work has been featured recently in New England Home, Art New England, The Boston Globe Magazine as well as Interior Design, Southern Accent and Architectural Digest.