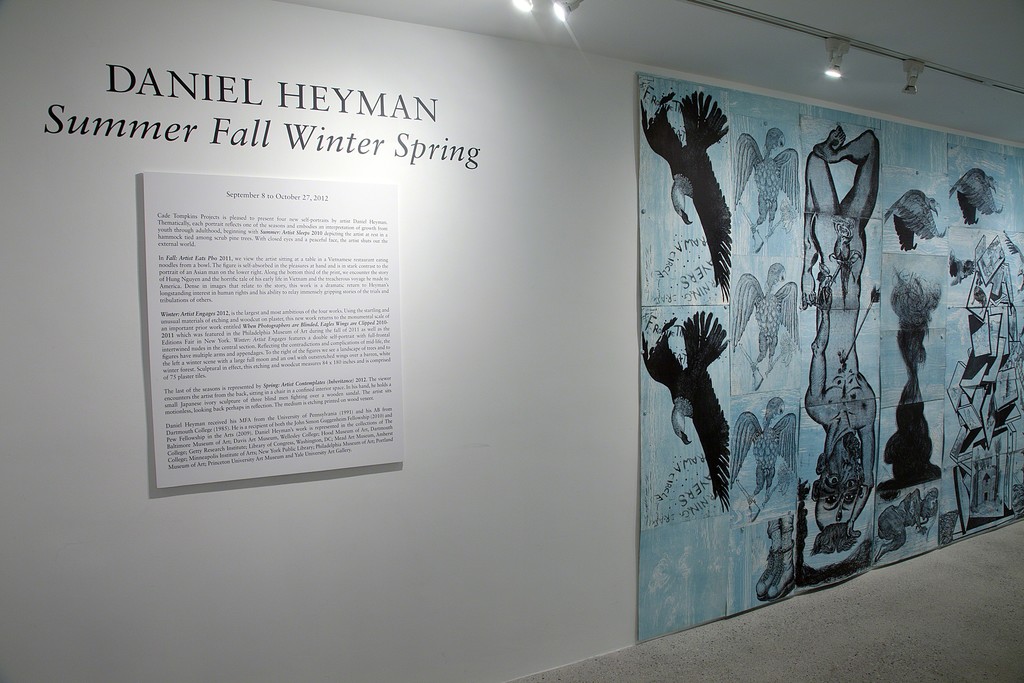 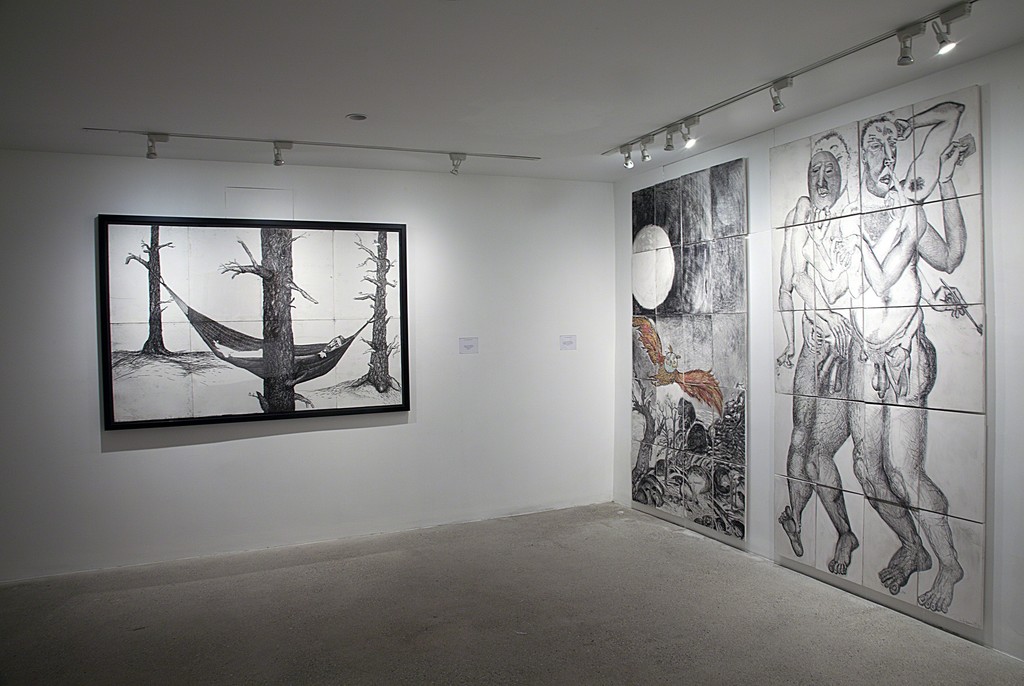 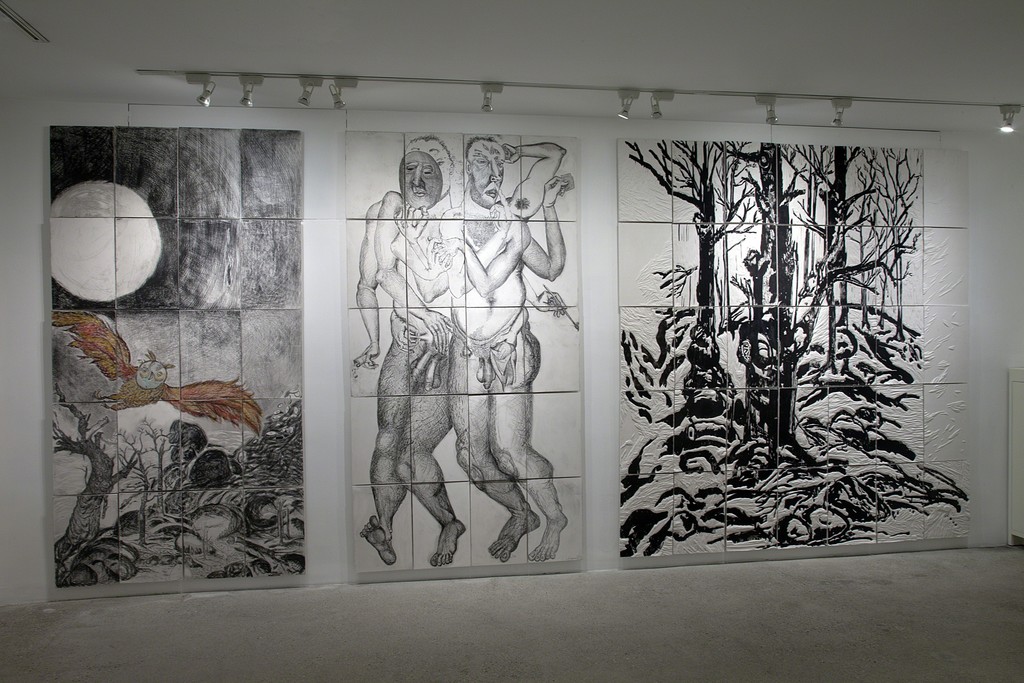 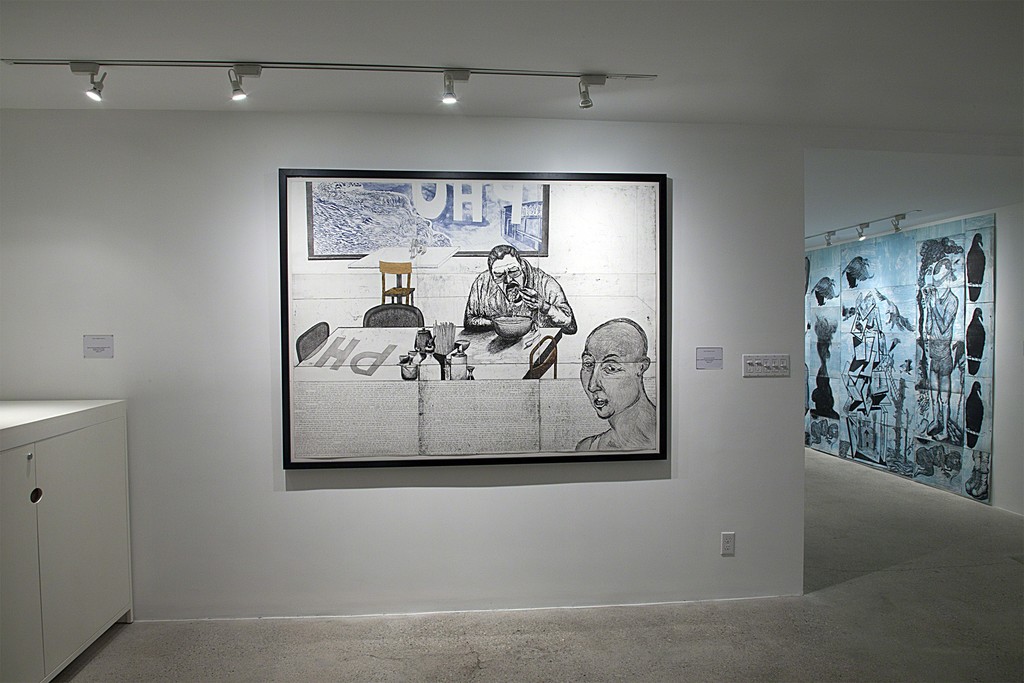 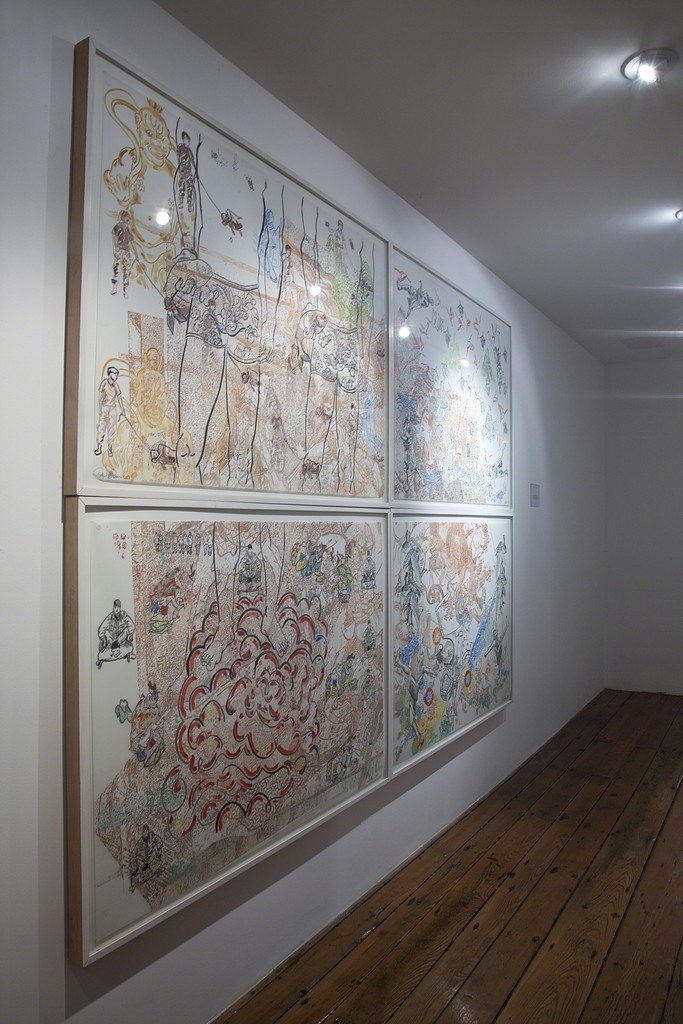 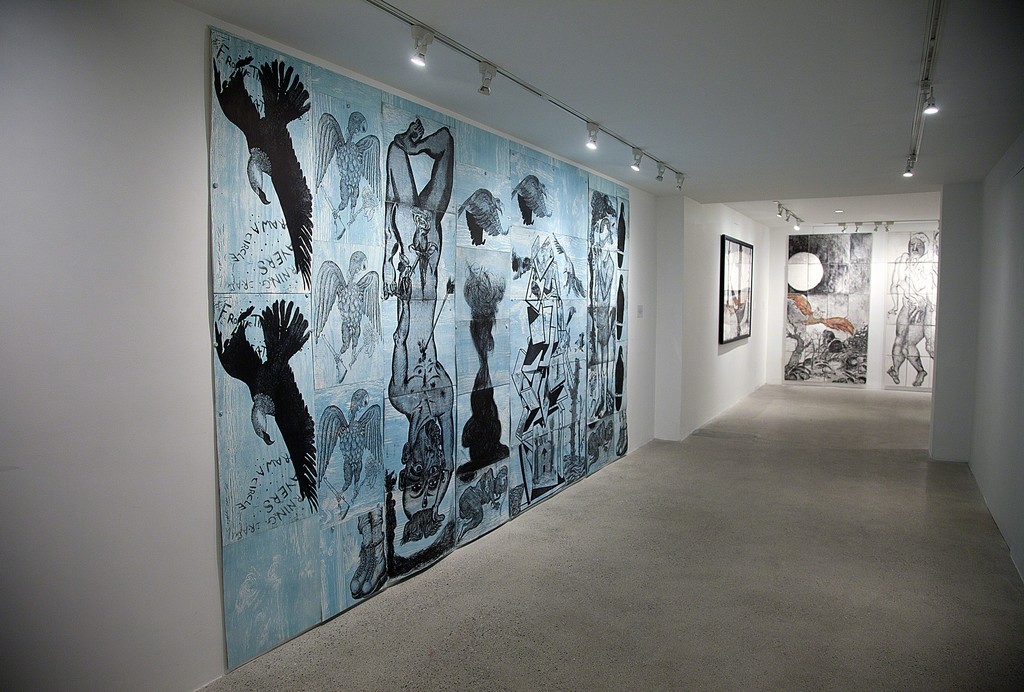 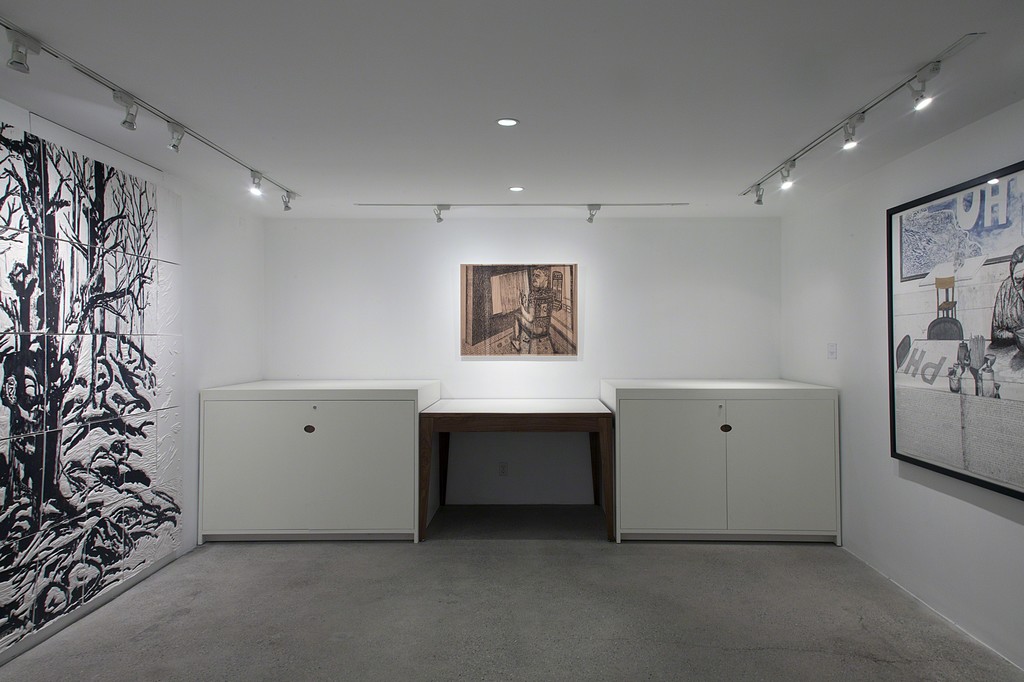 Cade Tompkins Projects is pleased to present a new body of work by artist Daniel Heyman. The
solo exhibition entitled DANIEL HEYMAN Summer Fall Winter Spring opens on Saturday,
September 8th and runs through Saturday, October 27, 2012.
The primary medium for the work in the exhibition is printmaking. Featured in the exhibition are
four new self-portraits: three of the self-portraits are etchings on paper. One portrait an etching
and woodcut entitled Winter: Artist Engages, employees the non-traditional matrix of plaster.
The four works range in sizes from monumental to intimate.
Thematically, each portrait reflects one of the seasons and embodies an interpretation of growth
from youth through adulthood, beginning with Summer: Artist Sleeps 2010. This work depicts
the artist at rest in a hammock tied among scrub pine trees. His eyes are closed, his face is
peaceful, he shuts out the external world. His body is wrapped in a cocoon and only his foot,
shin, hand and face are revealed. The print is made from eight cooper plates to form a whole
work that measures 48 x 72 inches. The edition size is 5.
Fall: Artist Eats Pho 2011 is the next in the seasonal self-portrait series. Here we view the artist
sitting at a table in a Vietnamese restaurant eating noodles from a bowl. The figure is self
absorbed in the pleasures at hand and is in stark contrast to the portrait of an Asian man on the
lower right. Along the bottom third of the print, we encounter the story of Hung Nguyen and his
horrific tale of his early life and voyage to America. In the background, in the upper left we see a
classical interpretation of a stormy sea as well as the reflection in the window of the word “Pho”
and view to the street. Dense in images that relate to the story, this work is a dramatic return to
Heyman’s longstanding interest in human rights and his ability to relate immensely gripping
stories of the trials and tribulations of others. This work is a combination of intaglio, aquatint,
drypoint, gouache monotype printed on 9 cooper etching plates and measures 52.5 x 70.5 inches.
The edition size is 5.

Winter: Artist Engages 2012, is the largest and most ambitious of the four works. Using the
startling and unusual materials of etching and woodcut on plaster, this work returns to the
monumental scale of an important work entitled When Photographers are Blinded, Eagles Wings
are Clipped 2010-2011. Winter: Artist Engages features a double self-portrait with full-frontal
intertwined nudes in the central part of the print. Reflecting the contradictions and complications
of mid-life, the figures have multiple arms and appendages. These figures are inspired by a
Japanese 8th century deity viewed on one of Heyman’s many trips to Japan. A large landscape of
trees flank either side of the figures and to the left is a winter scene with a large full moon and an
owl with outstretched wings over a barren and white winter forest. The white winter literally
illuminated by the use of plaster, a cool white material, dense and heavy like snow. Sculptural in
effect this etching and woodcut measures a monumental 91 x 180 inches and is comprised of 75
plaster tiles. The edition is 5.
The last of the seasons is represented by Spring: Artist Contemplates (Inheritance) 2012. The
viewer encounters the artist from the back, sitting in a chair in a confined interior space. In his
hand, he holds a small Japanese ivory sculpture of three blind men fighting over a wooden
sandal. The artist sits motionless, looking, thinking and reflecting. The medium is etching
printed on wood veneer. The work measures 32 x 40 inches and is made from copper etching
plates. The edition is 8.