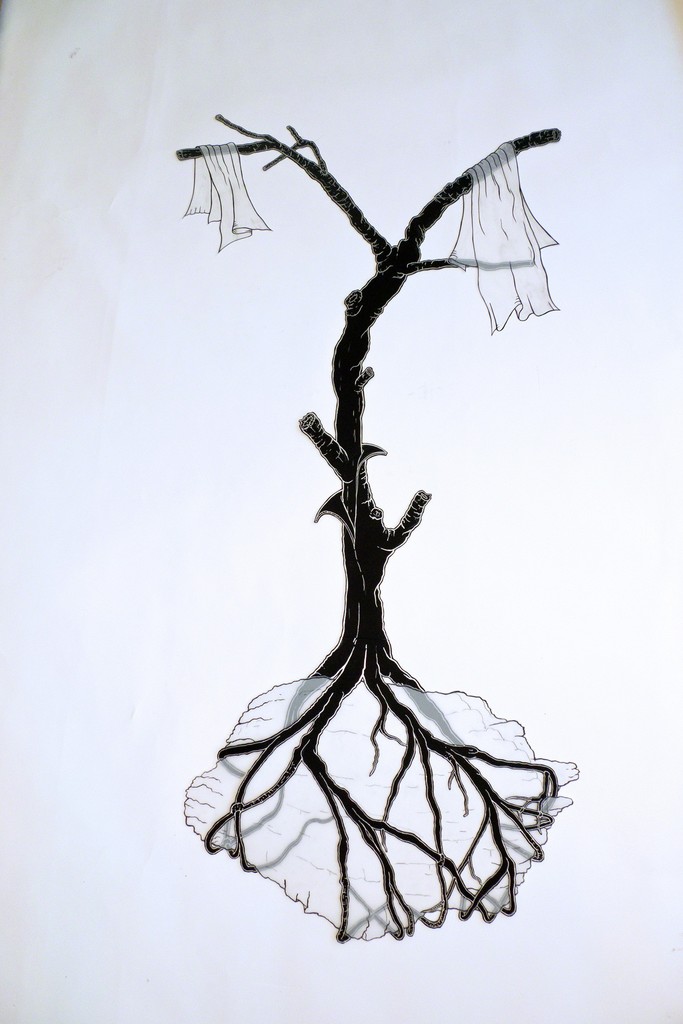 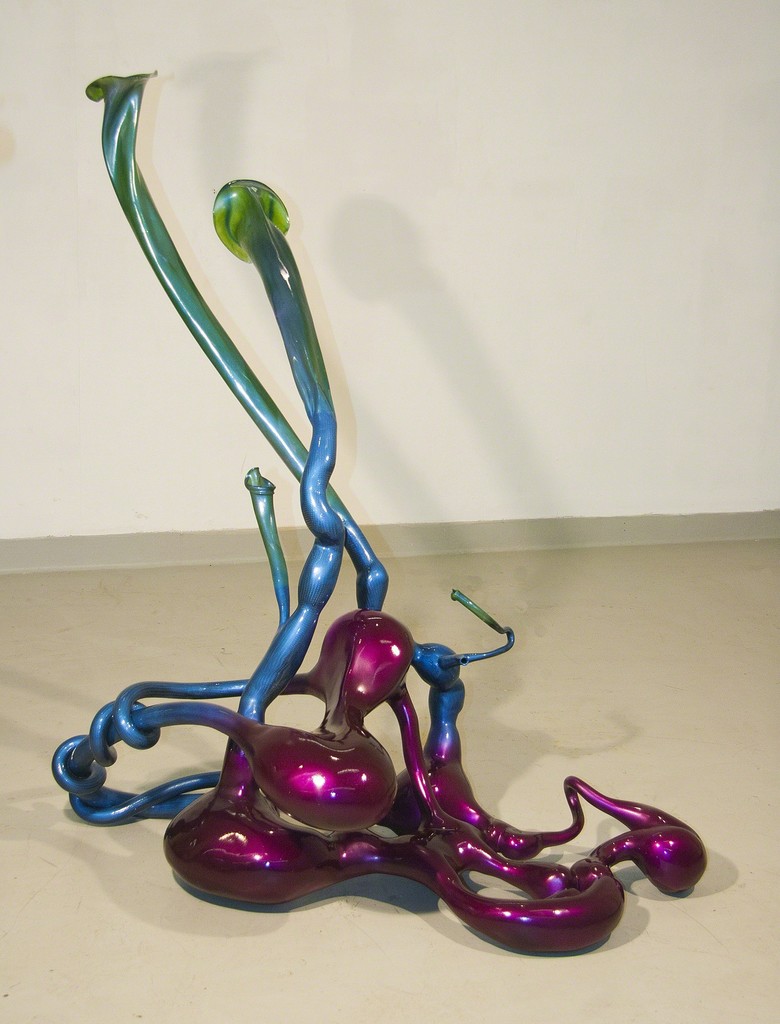 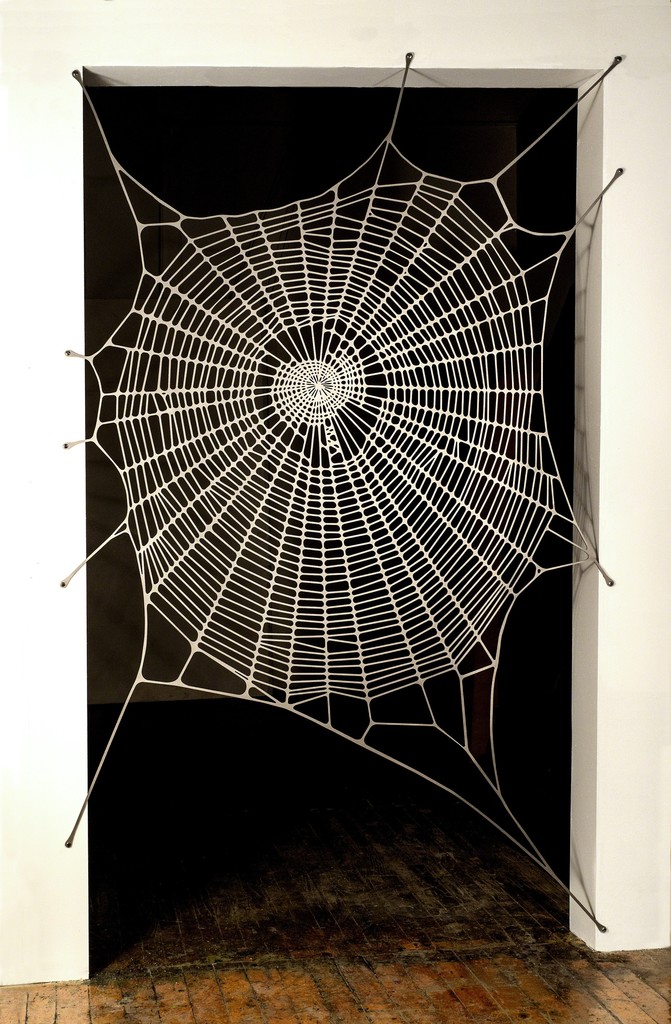 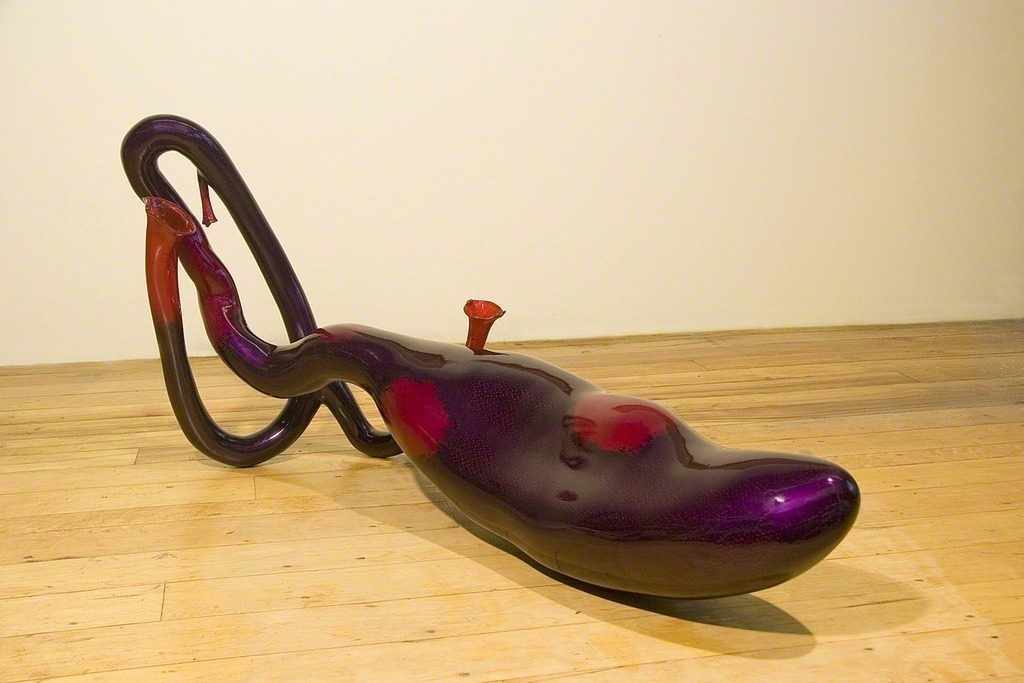 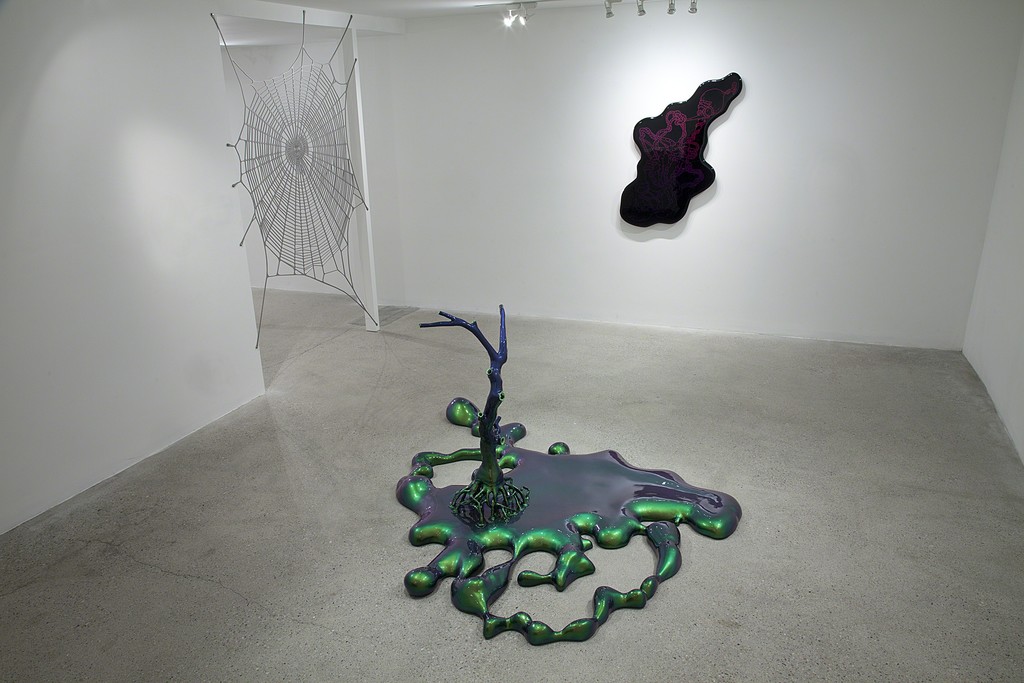 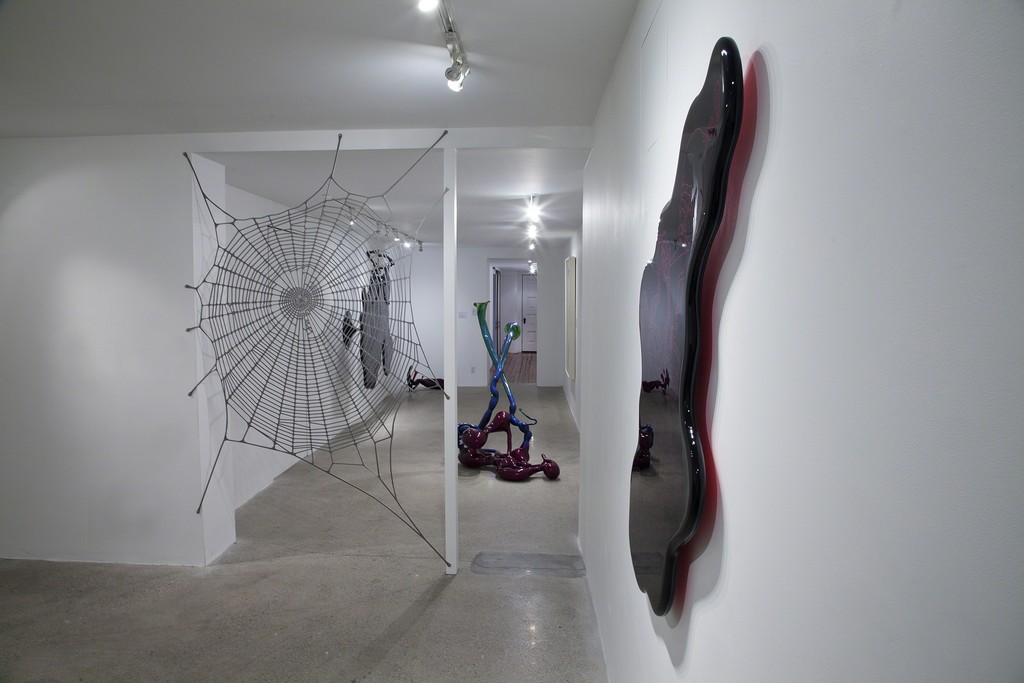 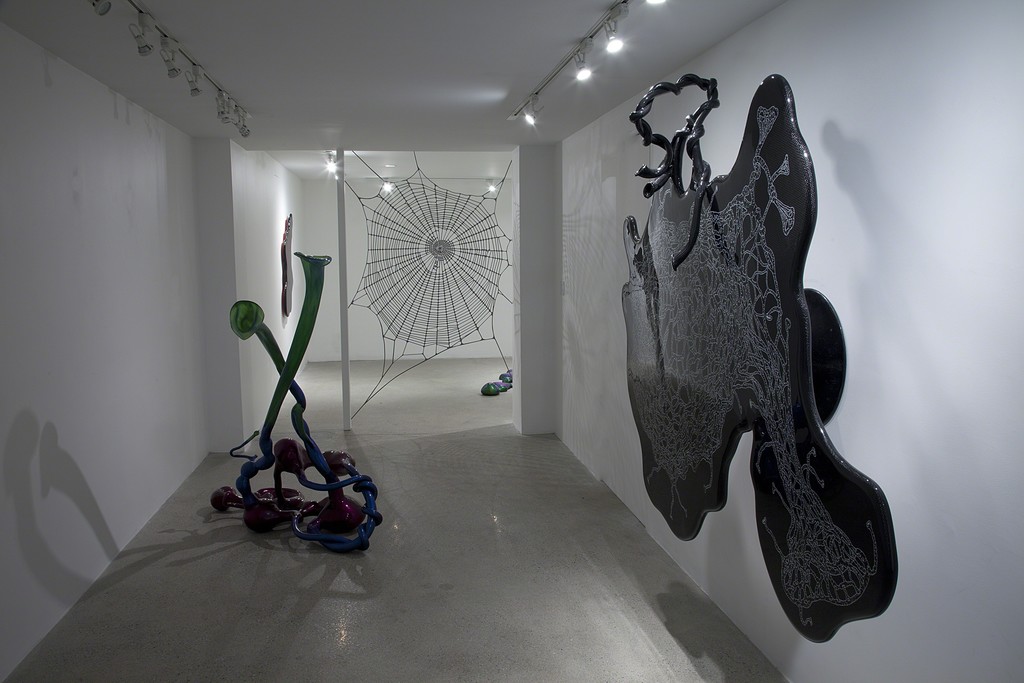 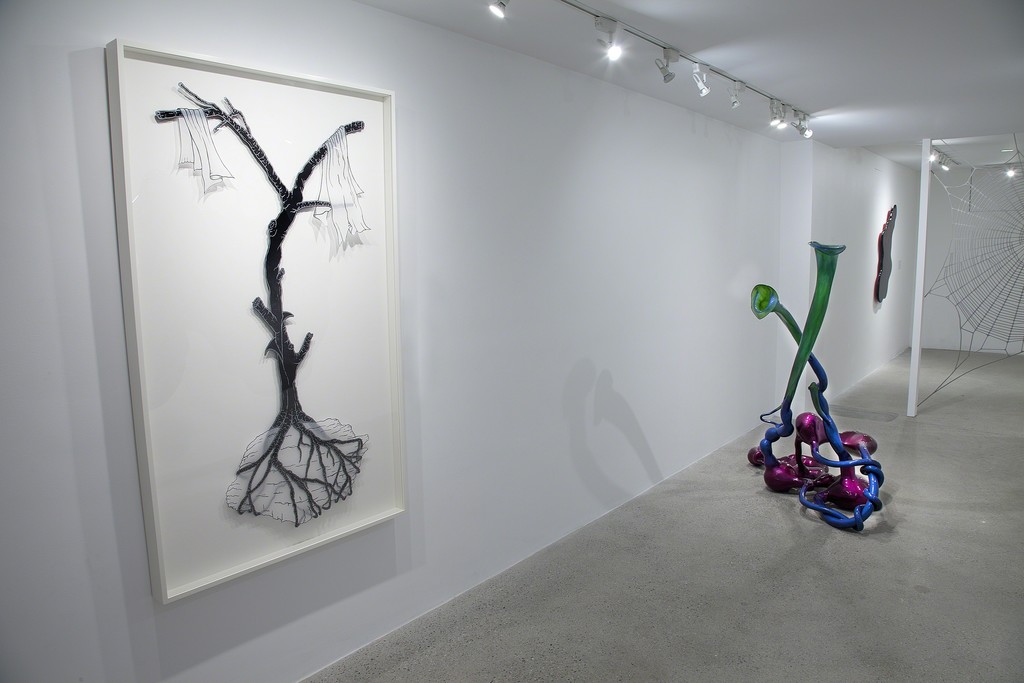 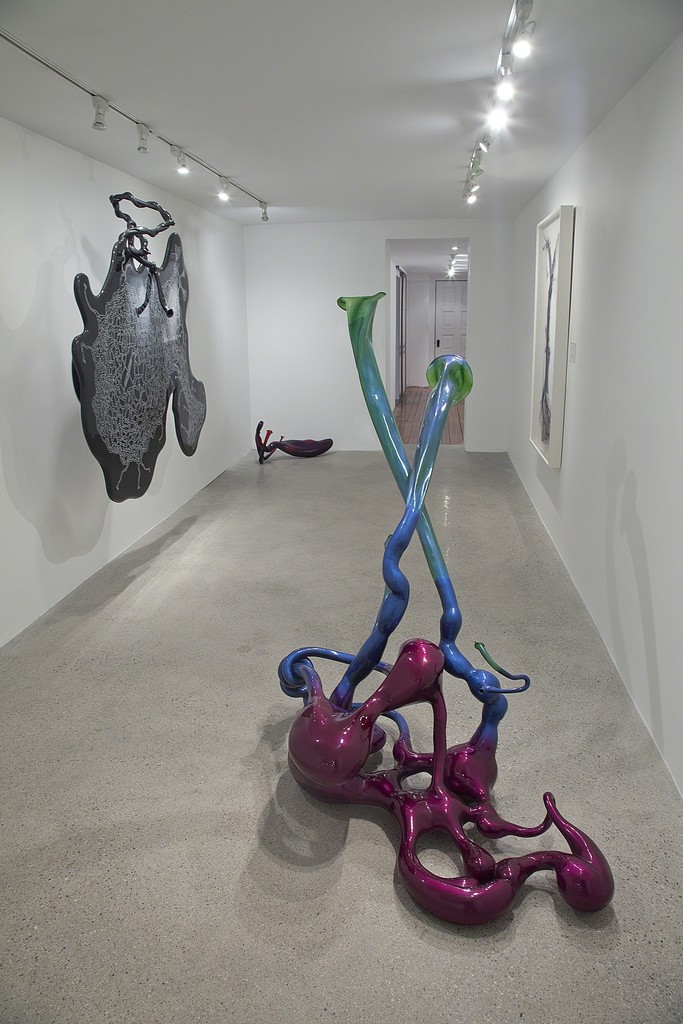 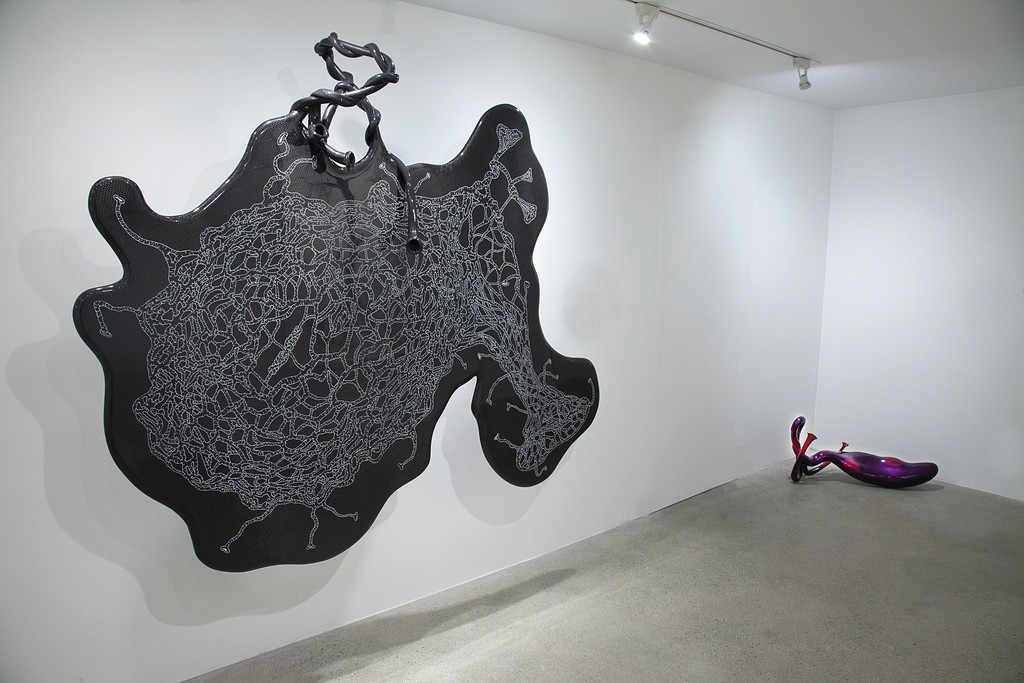 Cade Tompkins Projects is pleased to announce Dean Snyder a new selection of drawings and
sculptures, on view April 26 - June 20, 2014.

Organic, sexy and slick, Dean Snyder’s work employs high tech mediums including metal flake
paint over epoxy composite and carbon fiber, and flo-jet cut steel. This body of work is a
departure from other extremely innovative materials that Snyder has employed, such as tattooed
and sewn rawhide. The bold colors and automobile-like sculptured surfaces convey a sense
speed and are reminiscent of fantastical growths in a futuristic forest.
NeverMind 2013 is a case in point. Extending over 5 feet from the floor, a magenta root system
of shiny bulbous forms blend into a wrapping maze of turquoise vines. The trumpeted tubes
reach for the sky with a delicacy that is both inviting and repulsive. Flavia 2010 follows this line
of inquiry. Lower to the ground, the work seems to grow slower, as it sprouts from a larger seed.
The mysterious dark violet fruit sends shoots that ripen into bright red flutes, opening to reveal a
glimpse inside the rabbit hole.

The centerpiece of the exhibition is MiddleWay 2014, an enormous web of flo-jet cut stainless
steel. The artist’s fascination with this iconic structure is captured beautifully in an essay by Jenn
Joy. “Sitting in his studio surrounded by in-process drawings, experiments in resin, color, and
foam, we speak about the mythology of crows; birds who travel together, who mourn their dead. Such carrion rituals transpose human intention onto animal or perhaps question what this kind of anthropomorphizing means from our perspective or from theirs. We also look at photographs taken at night of orb weaver spider webs dripping with dew taken during a residency in Hawaii. As metaphor and material, the web signifies a potent constellation. The distance between crow and spider, between flight
and entrapment, speaks to the intimate relationship between form and content in Snyder’s work.... in MiddleWay (2014) the web is wrought in stainless steel and hung in a corner of the gallery as a paradoxically fragile drawing in space and intrusion of the garden into the gallery.”

Dean Snyder is a recipient of the John Simon Guggenheim Fellowship in Fine Art (2013). Snyder earned his MFA from the School of Art Institute of Chicago, Illinois in 1978 and continued his postgraduate studies at Lanchester Polytechnic College of Art and Design in Coventry, United Kingdom. He earned
his BFA from the Kansas City Art Institute, Missouri. Snyder has shown in numerous one-person exhibitions in California, Chicago and New York. In addition, his work was shown at the 2008 Summer Olympics and is permanently installed in the sculpture garden in Beijing. Other accolades include the prestigious Louis Comfort Tiffany Foundation Fellowship (2010) and the Siena Art Institute Residency in Siena, Italy (2012).