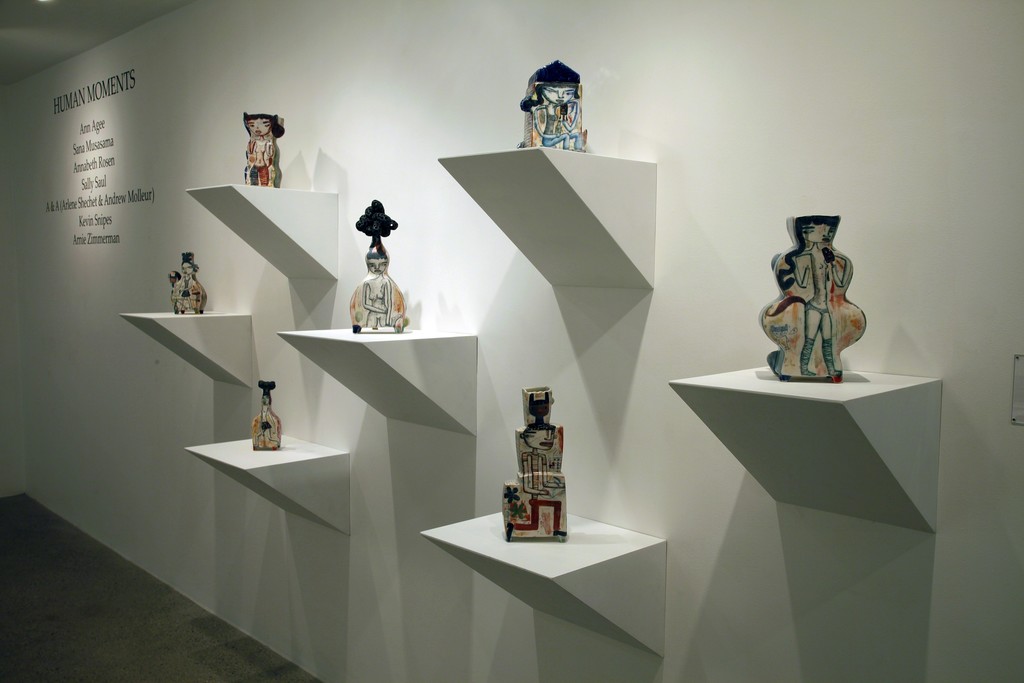 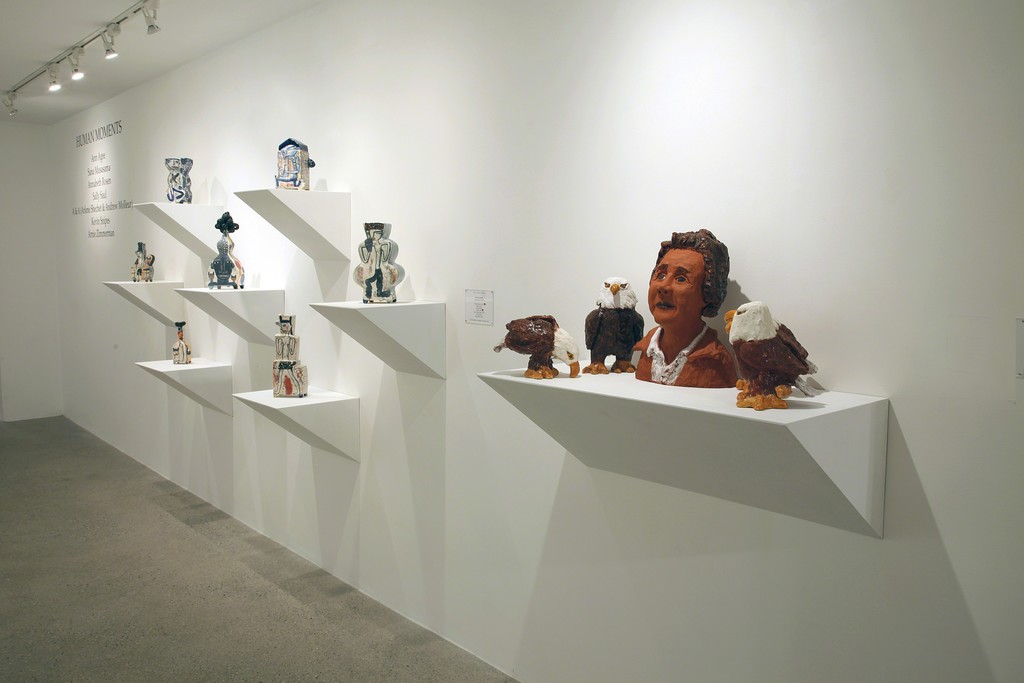 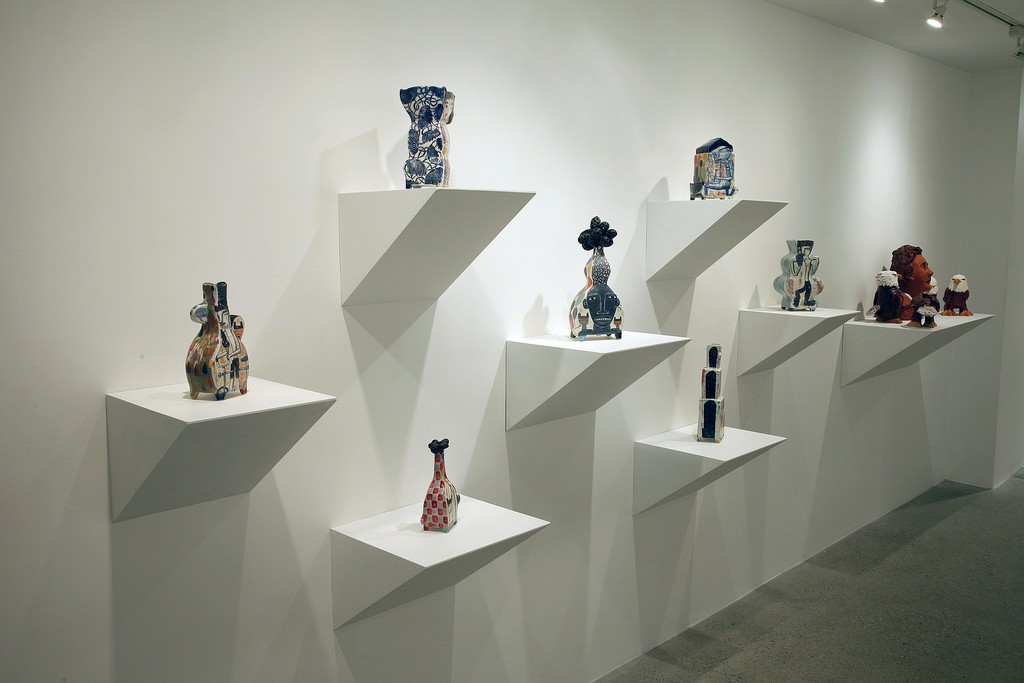 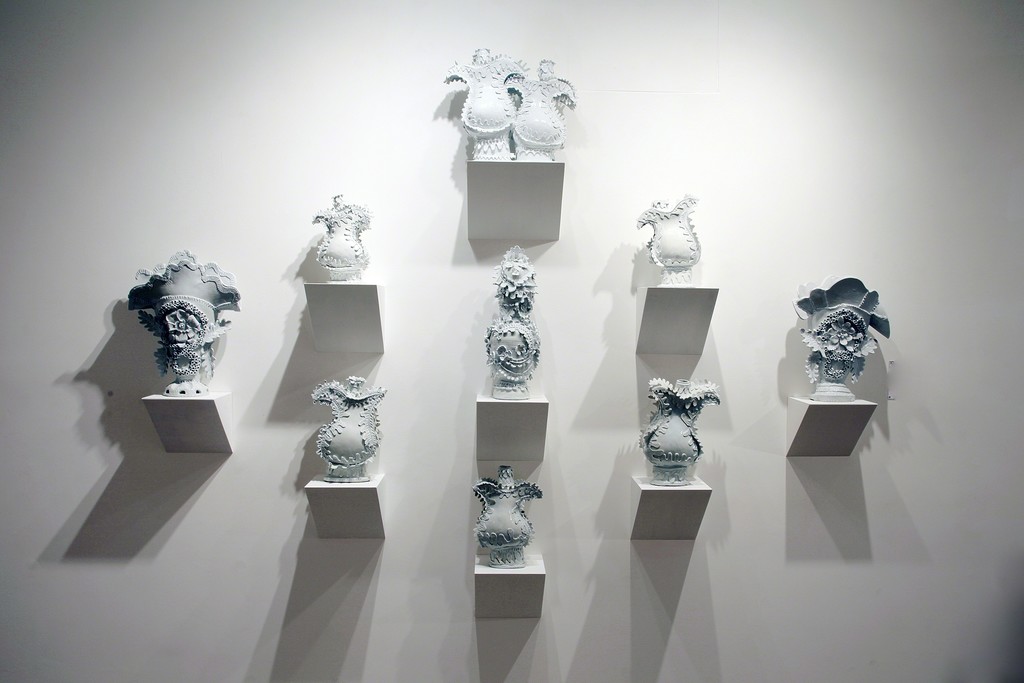 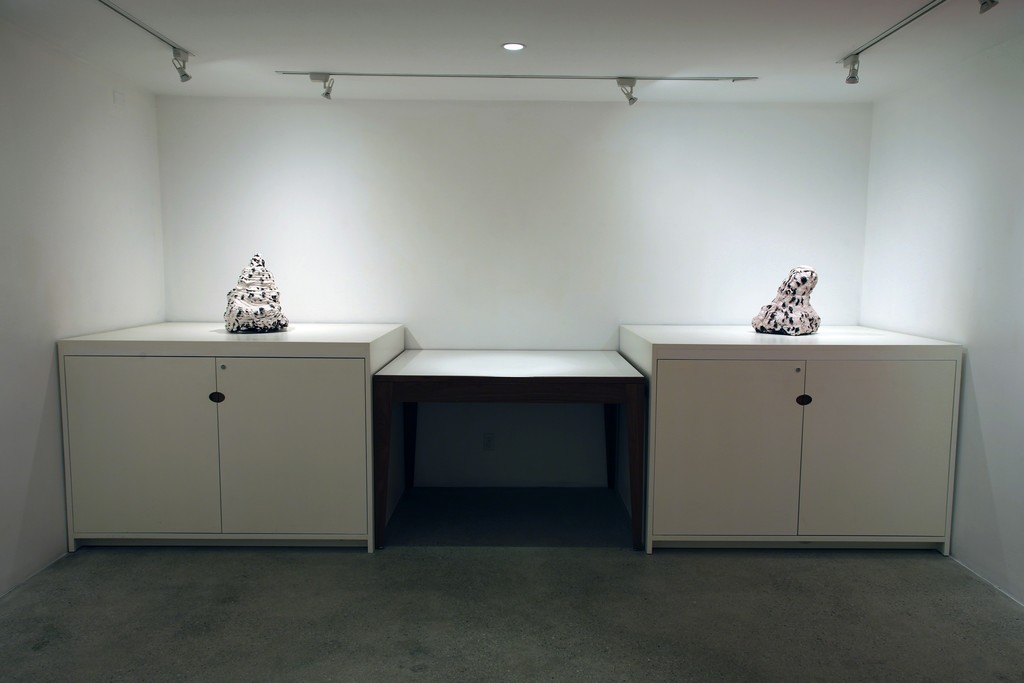 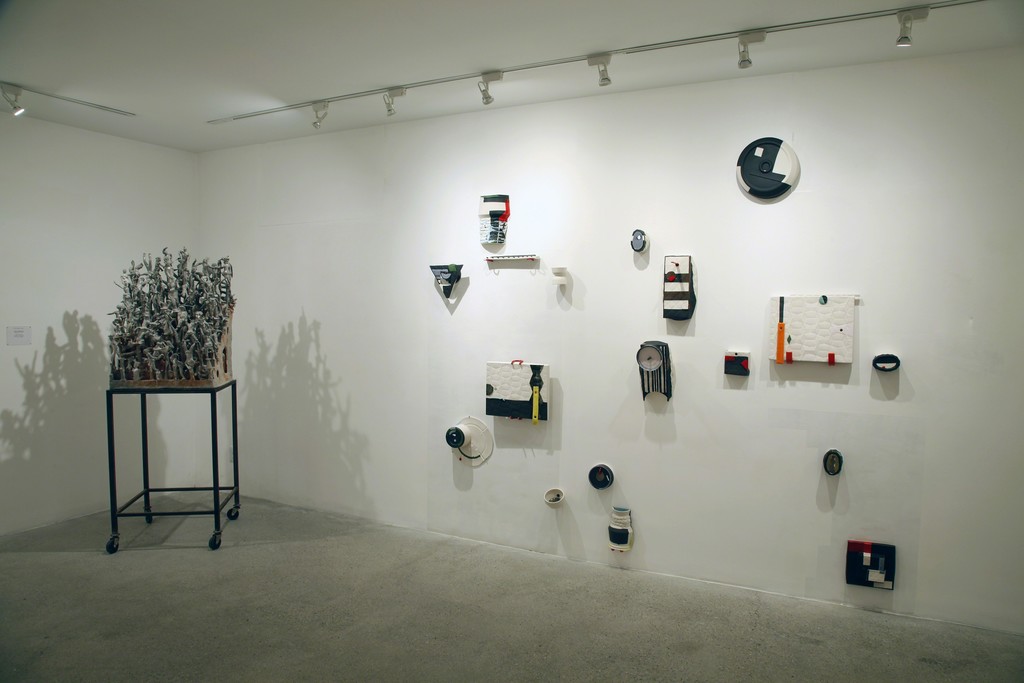 Arnie Zimmerman, A & A 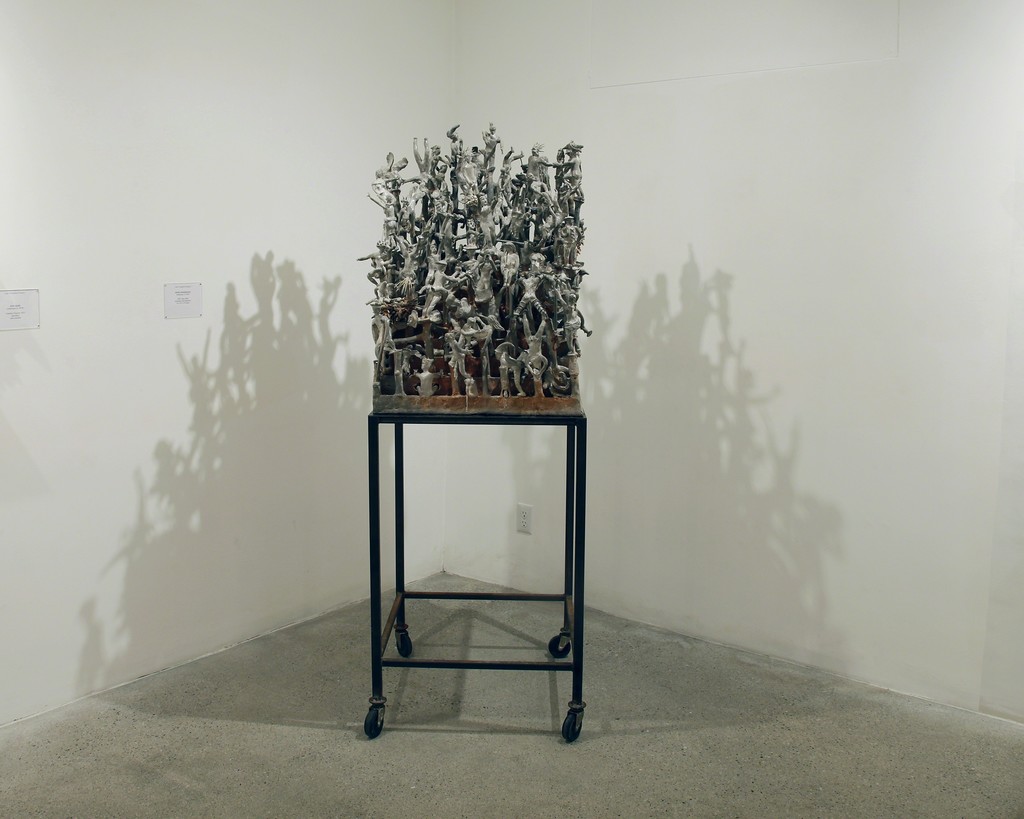 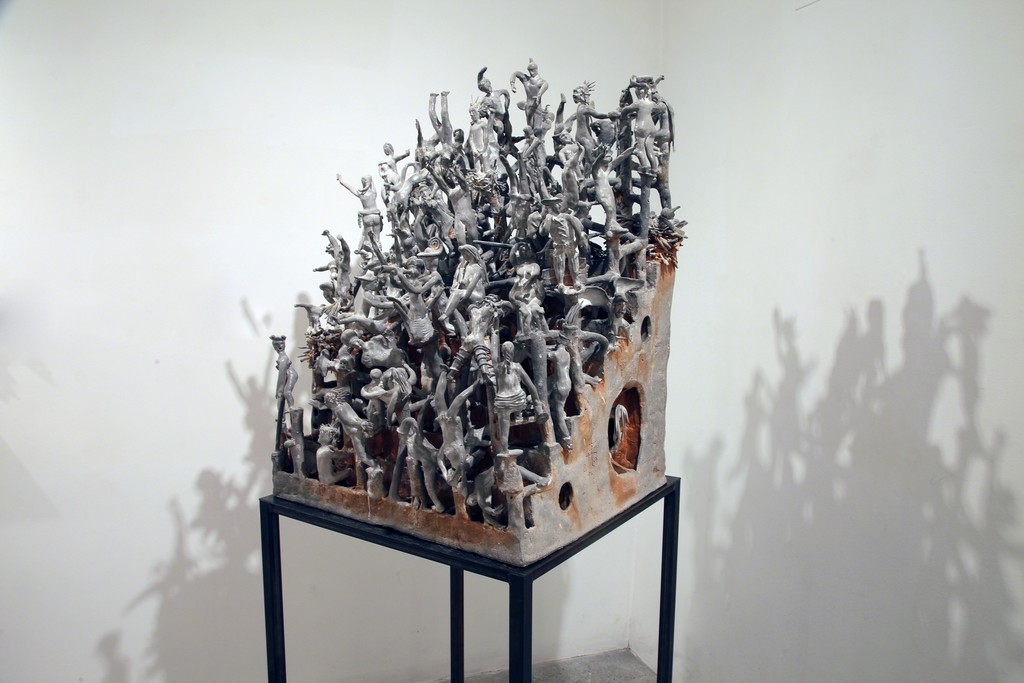 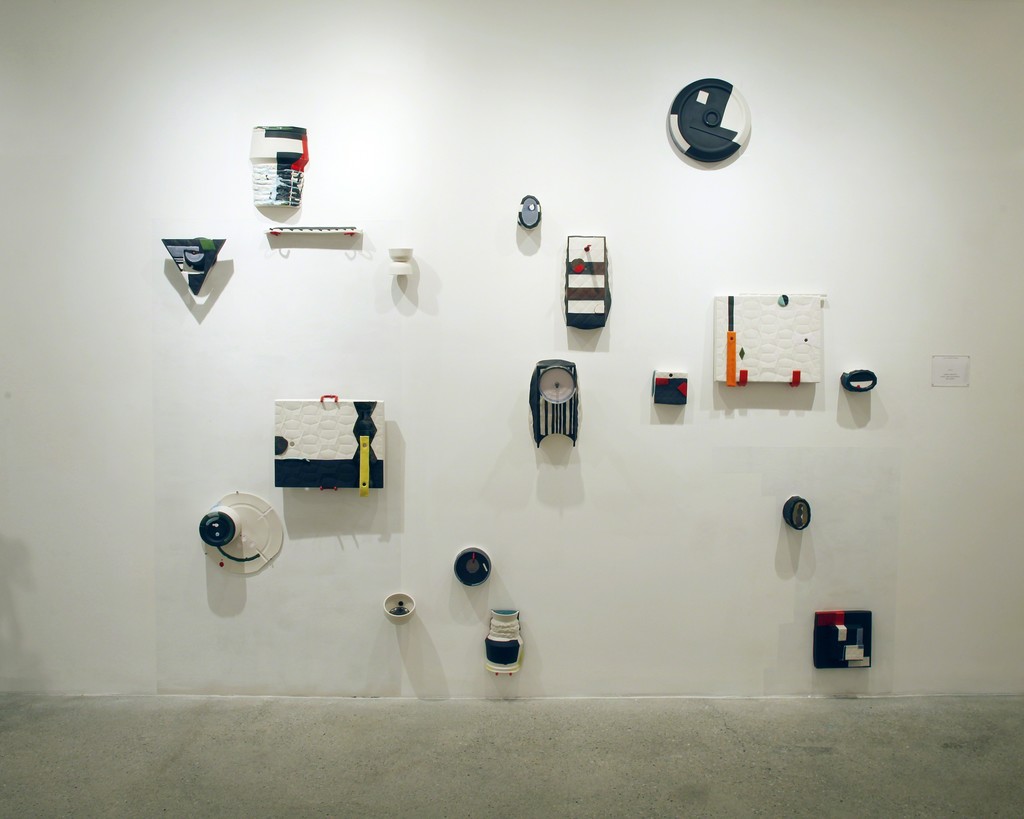 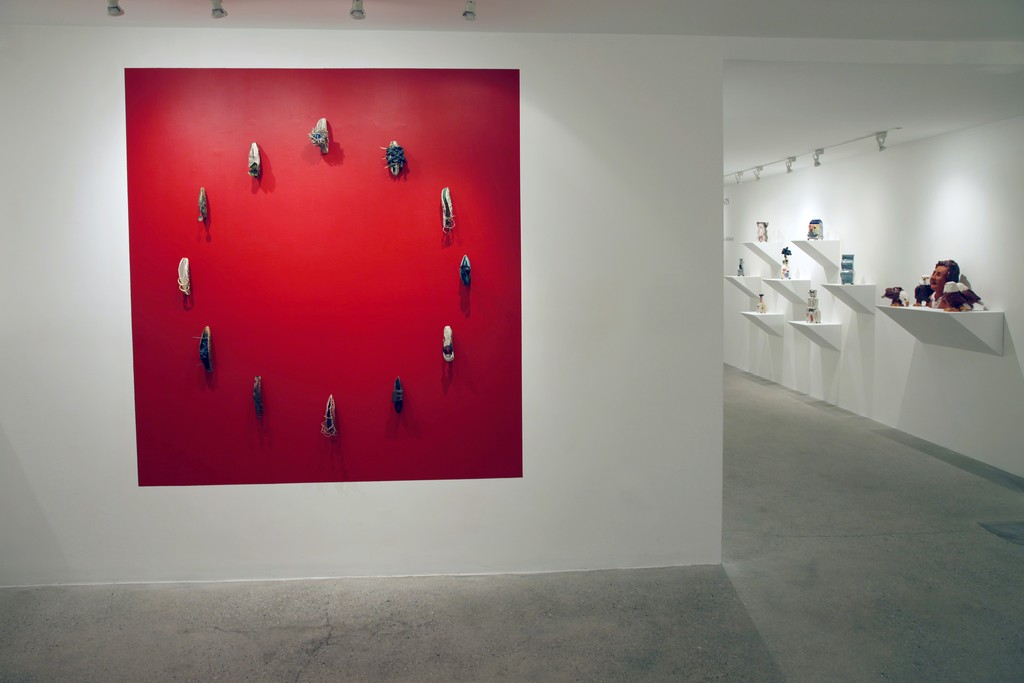 Cade Tompkins Projects is pleased to announce Human Moments, a group exhibition of work created by seven artists: Ann Agee, Sana Musasama, Annabeth Rosen, Sally Saul, A & A (a unique collaboration between Arlene Shechet and Andrew Molleur), Kevin Snipes, and Arnie Zimmerman. The exhibition brings together ceramic sculptures that use the human form to reference a broad scope of genres including social injustice, landscape, decorative arts and the utilitarian object.

Ann Agee (American, b. 1959) creates sculptures of seeming household objects that grow into large installations. Recently, her ceramic works have shifted from colorfully glazed objects to monochromatic vessels with no function in mind. They are made complete by the vibrant paper paintings installed around them that recall particular domestic spaces. In an interview with Faye Hirsch for Art in America, Agee explains that in making the paper works the need for color in the ceramics faded away and she began to think of the vessels as silhouettes; and they read as such - their crisply ornate embellishments are reminiscent of a paper cutting and reflect an intense concern with defining the edge. Through the combination of these functionless objects and flat renderings of interior space the viewer experiences a profound transportation - as if stepping into a memory. Agee holds an MFA (1986) from the Yale School of Art and a BFA (1981) from The Cooper Union School of Art. She received a John Simon Guggenheim Memorial Foundation Fellowship (2011); The Louis Comfort Tiffany Award (1997); and two National Endowment for the Arts Fellowships (1989, 1992), among others. Her work is held in prestigious museum collections including the Philadelphia Museum of Art, Pennsylvania; Los Angeles County Museum of Art, California; The Brooklyn Museum of Art, New York; and the RISD Museum, Rhode Island.

Sana Musasama’s (American, b. 1957) recent work seeks to speak out about the various systems that deny women the right to free expression and to a full reflection of their lives and bodies. Unspeakable Series 2013-14 is a collection of ceramic mixed media pieces that arose from the artist’s experience while living in Mendeland, Sierra Leone. She writes, “there were these young girls, ages ten to fifteen, who would visit my hut everyday...They taught me the formal greetings (in Mende), how to sit like a Mende woman...showed me how to cook on three rocks and wash my clothes in the river.... Suddenly, one morning there were no young girls in the village. They returned thirteen weeks later changed...They no longer had the sparkle of wonderment in their eyes; they weren’t silly young girls any longer. They didn’t want to have anything to do with me, I could not understand, I didn’t know why. I know now, they were circumcised.” Musasama received her MFA (1987) from New York State College of Ceramics at Alfred University and a BA (1974) from The City College of New York. She is a recent recipient of the Joan Mitchell Foundation Painters and Sculptors Grant (2013). Her work is held in the collections of the Hood Museum of Art, Dartmouth College, New Hampshire and Jingdezhen Ceramic Institute, China.

Annabeth Rosen (American, b. 1957) creates dynamic sculptures that highlight an intrigue with natural forces expressed by the rough and raw treatment of clay. Rosen is drawn to both the immediacy and the destructibility of clay as a medium and her work combines heavily glazed portions with dry areas, broken bits with sweeping mounds. Thunel 2015 is one work in a series where Rosen employs both recklessness and thoughtfulness simultaneously in her process, resulting in a conglomerate mass of disparate and distinct elements. Rosen is a Professor of Art at UC Davis, holding the Robert Arneson Endowed chair since 1997. She earned an MFA (1981) from Cranbrook Academy of Art, a BFA (1978) from Alfred University and has held teaching posts at the Rhode Island School of Design, the University of the Arts in Philadelphia and The Art Institute of Chicago. Rosen is the recipient of numerous grants including two National Endowment for the Arts Craftsman Fellowships (1979, 1986), a Pew Fellowship in the Arts (1992), and most recently a Joan Mitchell Foundation Painters and Sculptors Grant (2011). Her work has been exhibited and collected internationally.

Sally Saul’s (American, b. 1946) work features the confluence of nature and functional objects. Untitled 2014 is a ceramic teacup reminiscent of Surrealist artist Méret Oppenheim’s Object 1936, a fur-covered cup that gives the viewer an immediate tactile sensation, albeit an unpleasant one, of a mouthful of fuzziness. Saul’s cup is replete with a growth of bumpy particles and is surrounded by ceramic mussel shells and objects of the sea. It is laughable and quaint and raises curiosity with its elegance and oddity. Rachel Carson mixes humor with political poignancy. Here, Saul crafts the tiny bust of Rachel Carson, the woman famously credited as founder of the contemporary environmental movement. Her likeness is surrounded by bald eagles, the quintessential symbol of the Unites States. For all of her importance Carson is reduced to a bookshelf memento -- questioning the significance that the government places on conservation issues. Saul received her MA in American Literature (1973) from San Francisco State University and BA (1968) from the University of Colorado. She has had solo exhibitions at the Redbud Gallery and Robinson Galleries in Houston, Texas as well as Trans Avant-Garde Gallery, Austin, Texas.

Arlene Shechet (American, b. 1951) and Andrew Molleur (American, b. 1986) (newly formed collaborative called A & A) met through a lecture and critique while Arlene was a visiting artist at RISD and Andrew was a senior BFA student. It has now been more than 3 years since Andrew has worked assisting in Arlene’s studio but the work in this exhibition marks their first true studio collaboration. Arlene is known for rough-hewn corporeal and suggestive ceramic work and Andrew Molleur has received acclaim for his crisp modern functional forms and geometric patterns. Together they present a wall installation made up of individual parts that slip between the vision of both artists. Working in Andrew’s studio, Arlene chose some of his existing forms to cut, combine and reimagine through both form and glaze. Other forms were invented. The collaborative hanging of the works and the incorporation of eccentric hardware elements complete this newly conceived work. Andrew Molleur is a Hudson Valley based designer and sculptor making unique low production ceramic objects and fine art. Everything is designed and made in his Kingston, NY studio using a combination of traditional and modern techniques. Through this fusion and a strong influence from architecture he has created a distinct aesthetic that is shared in both his functional and non -functional work. Arlene Shechet holds an MFA from Rhode Island School of Design and a BA from New York University. Shechet received a John Simon Guggenheim Memorial Foundation Visual Artist Fellowship (2004), a Joan Mitchell Foundation Painters and Sculptors Grant (2010) and an American Academy of Arts and Letters Award (2011) among others. Collections include the Whitney Museum of American Art, NY; Nerman Museum of Contemporary Art, KS; and the Brooklyn Museum, NY.

Kevin Snipes (American, b. 1963) is fascinated with the concept of duality. His work highlights not only the obvious binaries of male and female on opposing sides of clay vessels, but also subtler means of communicating a two-folded view of life, in turn developing provocative narratives in each piece. Snipes uses written text in the form of cartoon-like word bubbles or notation-like scribbling to give the viewer clues into the unfolding stories. As an artist, and as a member of a historically marginalized group, Snipes tends toward nontribalism. Rather than creating art that speaks of love or victimization of African Americans, he speaks of the problems underlying the recognition of difference. His personal, intimate work encourages an almost private investigation of the objects. Snipes received a BFA (1994) in Ceramics and Drawing from the Cleveland Institute of Art. He has participated in residency programs at The Clay Studio, Philadelphia, and Watershed Center for Ceramic Arts in Newcastle, Maine and is the recipient of awards including a Joan Mitchell Foundation Painters & Sculptors Grant (2014) and a Taunt Fellowship from the Archie Bray Foundation for the Ceramic Arts, Montana (2008). Recent solo exhibitions include the List Gallery, Swarthmore College, Pennsylvania; Society of Arts and Craft, Boston, Massachusetts; Akar Gallery, Iowa City, Iowa; and Duane Reed Gallery, St. Louis, Missouri. Snipes currently lives and works in Cleveland, Ohio.

Arnie Zimmerman, (American, b. 1954), lives and works in New York City. His sculpture combines human movement, architecture and a distinct pathos. Judy Collischan writes, “Zimmerman combines anthropomorphic form with a moralizing content that relates a lesson about pretense and folly.” Hell’s Gate 2002 is a case in point. The porcelain and stoneware structure makes up an architectural vignette built with and upon the human form. The figures appear in fantastic gestures, at times heroic, tortured, and angelic. The work emerges from various sources, as Zimmerman contemplates the intense emotion of 9/11 and the dense narrative paintings of early Netherlandish artist Hieronymus Bosch. Zimmerman holds an MFA (1979) from the New York State College of Ceramics at Alfred University and a BFA (1977) from the Kansas City Art Institute, Missouri. Zimmerman has received grants from the National Endowment for the Arts (1982, 1986, 1990), the New York Foundation for the Arts (1999), and The Louis Comfort Tiffany Foundation (2005), among others; and his work is in numerous collections including the National Museum of American Art, Smithsonian, Washington DC; and the Museum of Art and Design, New York.