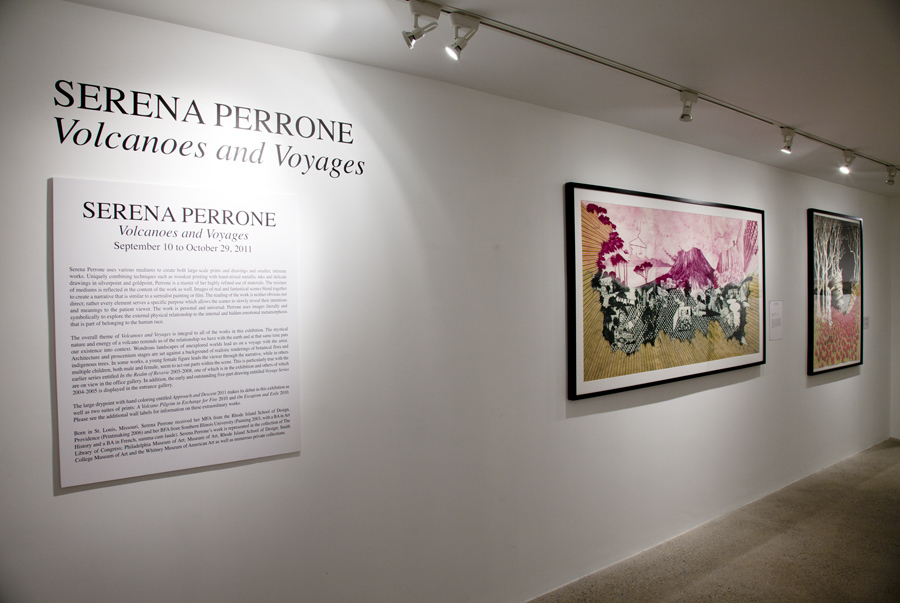 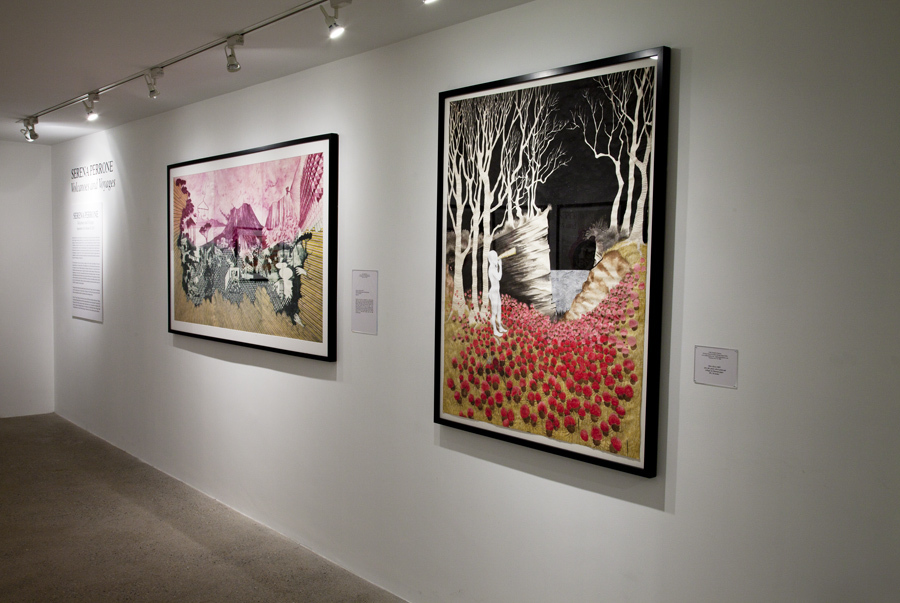 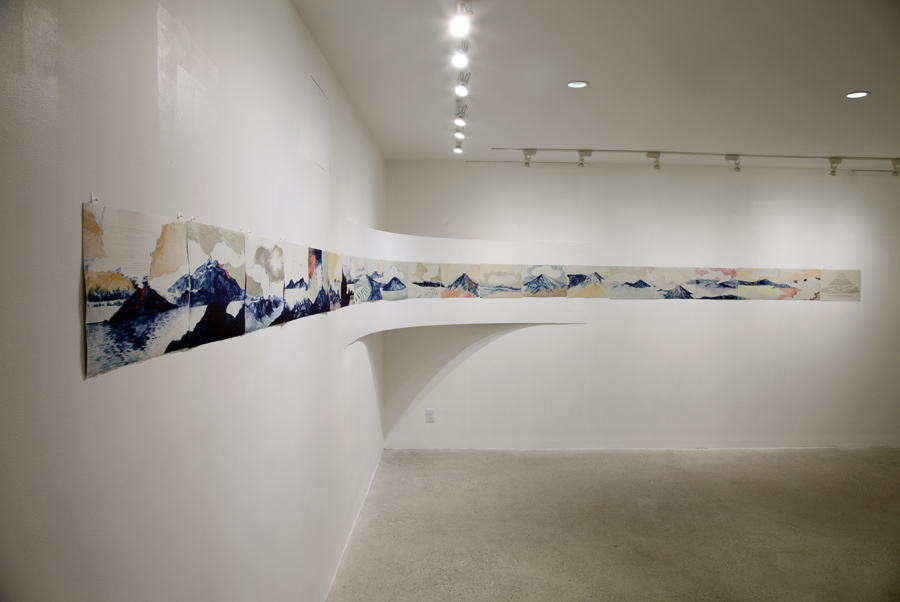 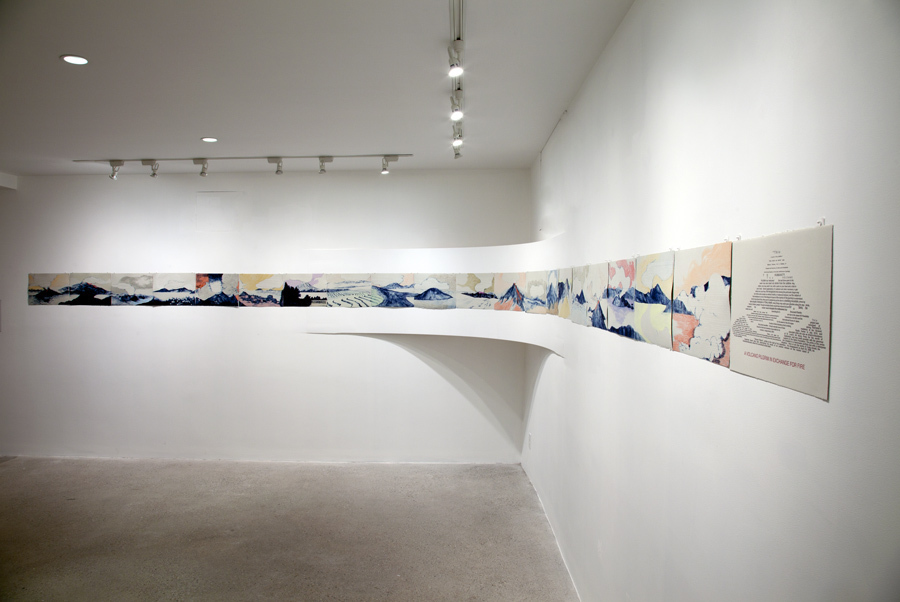 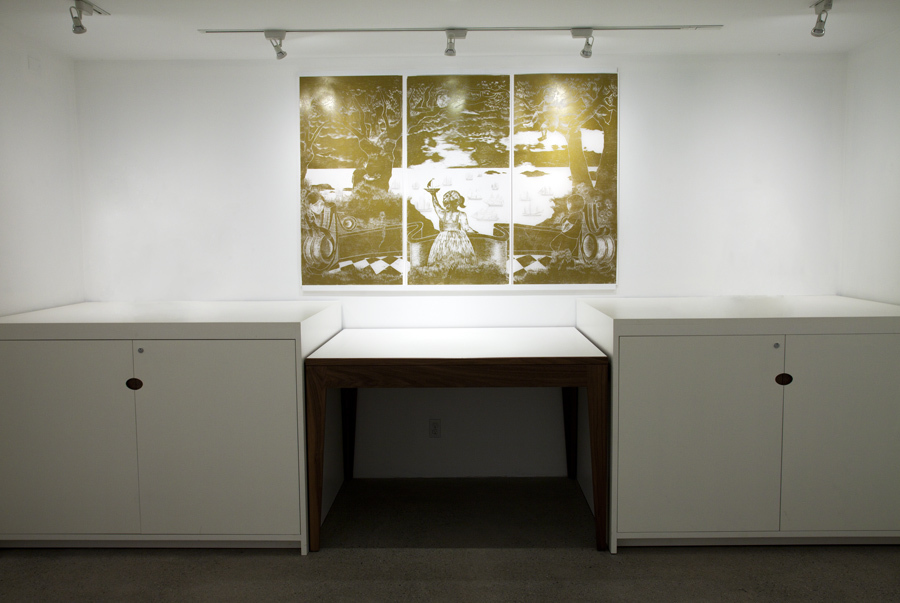 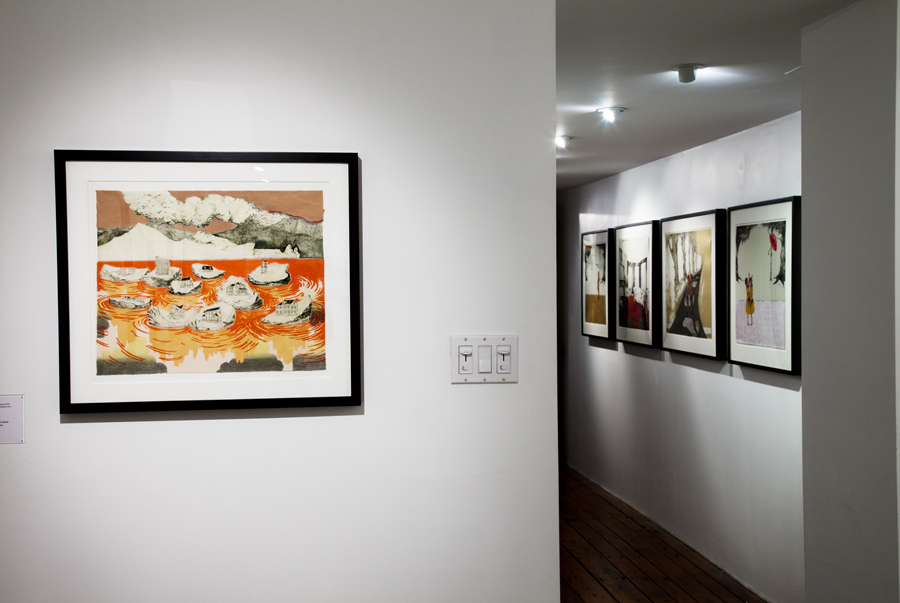 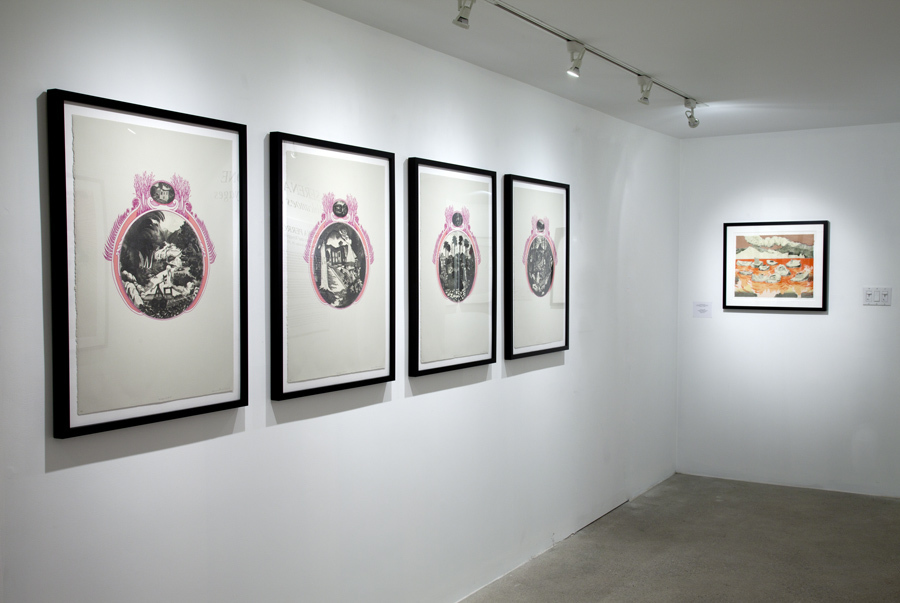 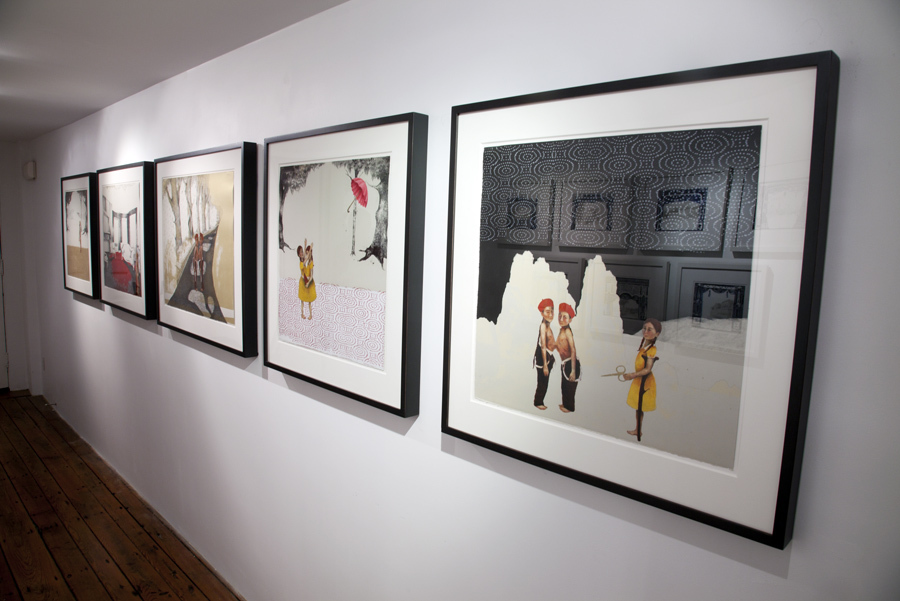 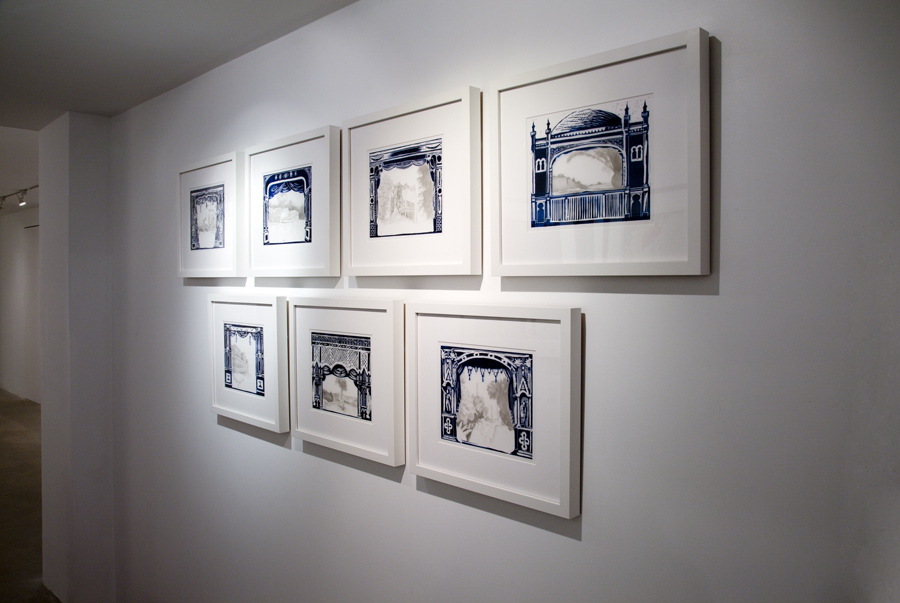 Cade Tompkins Projects is pleased to exhibit an extraordinary new body of work created by the artist Serena Perrone. The exhibit debuts new work at Cade Tompkins Projects, September 10 - October 29, 2011. New work consists of drawings and prints on various paper as well as a 27-part pyrography on wood. Among the featured work in the exhibition are two new print series:

A Volcano Pilgrim in Exchange for Fire is an extraordinary combination of 20 drypoint prints with gouache monotype, silkscreen and letterpress. Each gouache monotype is hand painted which creates variations within the edition that adds to the powerful and evocative volcano views. Serena Perrone began contemplating the imagery of volcanoes for her work prior to learning about the young and gifted poet, Craig Arnold. Arnold, whose disappearance near the mouth of a volcano that he was researching for his poetry, stunned the world. At the same time, it captivated Serena Perrone who began to research and read Arnold’s poetry. Perrone found subtleties in his poetry that shared many similar underlying themes and content which are integral to her approach to making art. Thus the genesis of this ambitious new body of work.
A Volcano Pilgrim in Exchange for Fire will be on view simultaneously at The Philadelphia Museum of Art in an exhibition curated by Innis Howe Shoemaker, Chief Curator of Prints and Drawings entitled “Here and Now” (September 9-December 4, 2011) as well as two other large -scale woodcuts with silverpoint and goldpoint drawings from Serena Perrone’s series entitled In the Realm of Reverie.

On Escapism and Exile 2010 consists of a suite of four drypoints with chine collé and hand drawing on paper. Each of the four measures 30 x 22 inches with a central circular depiction, measuring 16 inches in diameter. Each depicts a scene composed of an elaborate landscape with a young mystical female figure, who appears undressed rather than naked, and shown with a curled tail. Each of the four images contains an oval remarque above the main scene below. A combination of swirling narrative and fictive landscape with rivers, palm trees, lilies and other flowers, reindeer, volcanos, together with houses that appear to be stage sets, distant bridges and structures on fire. The overlapping of the images and single female protagonists in each print, reveal themselves to the viewer over time. Nothing is immediately apparent in the work, but one can sense the intertwining narration spoken in a visual language. Like a Grimm’s fairy tale or a allegorical work by William Blake, Serena Perrone sets up her work to be a montage of images and possible narratives for the viewer to interpret. Please see website for full details on the On Escapism and Exile.

The most recent work, Approach and Descent 2011, is a newly completed drypoint with hand coloring on Japanese paper. Composed of a sweeping large-scale culmination of the images and ideas that began with the making of the two series listed above. Printed on three sheets of paper, the overall dimensions are 37 x 72 inches. The central image is one large volcano set in a pink beet colored sky with a large plume. Multiple layers of images of palazzo type houses, hands, trees, small fires, laundry waving on a line, chairs, a movie projector and telephone booth all add to the dream like Fellini style of swirling images set into a tableau encircled by a striped yellow and pink proscenium stage. Please call the gallery or check the website soon for more information on this latest work.

In addition, a five-part drawing entitled The Voyage Series 2004-2005 will be on view and a selection of works from the In the Realm of Reverie 2004-2008 series with other selected work by the artist.