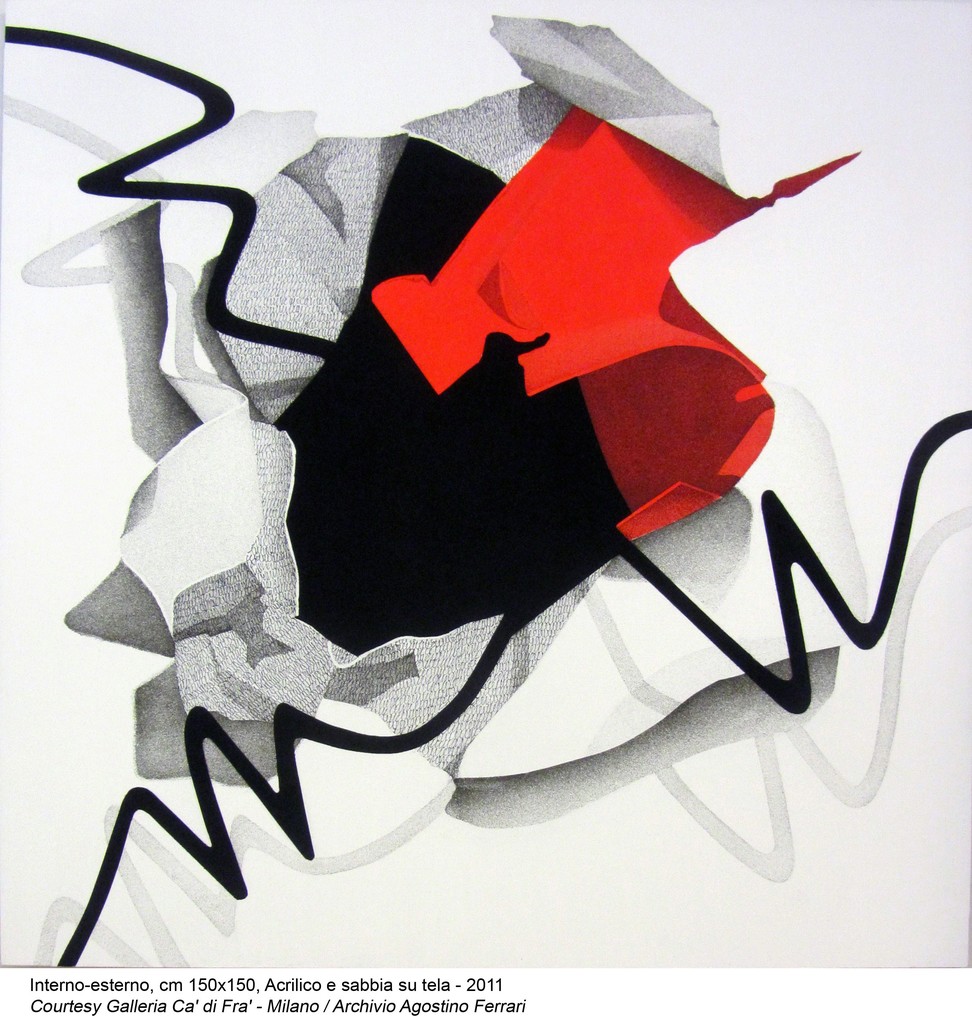 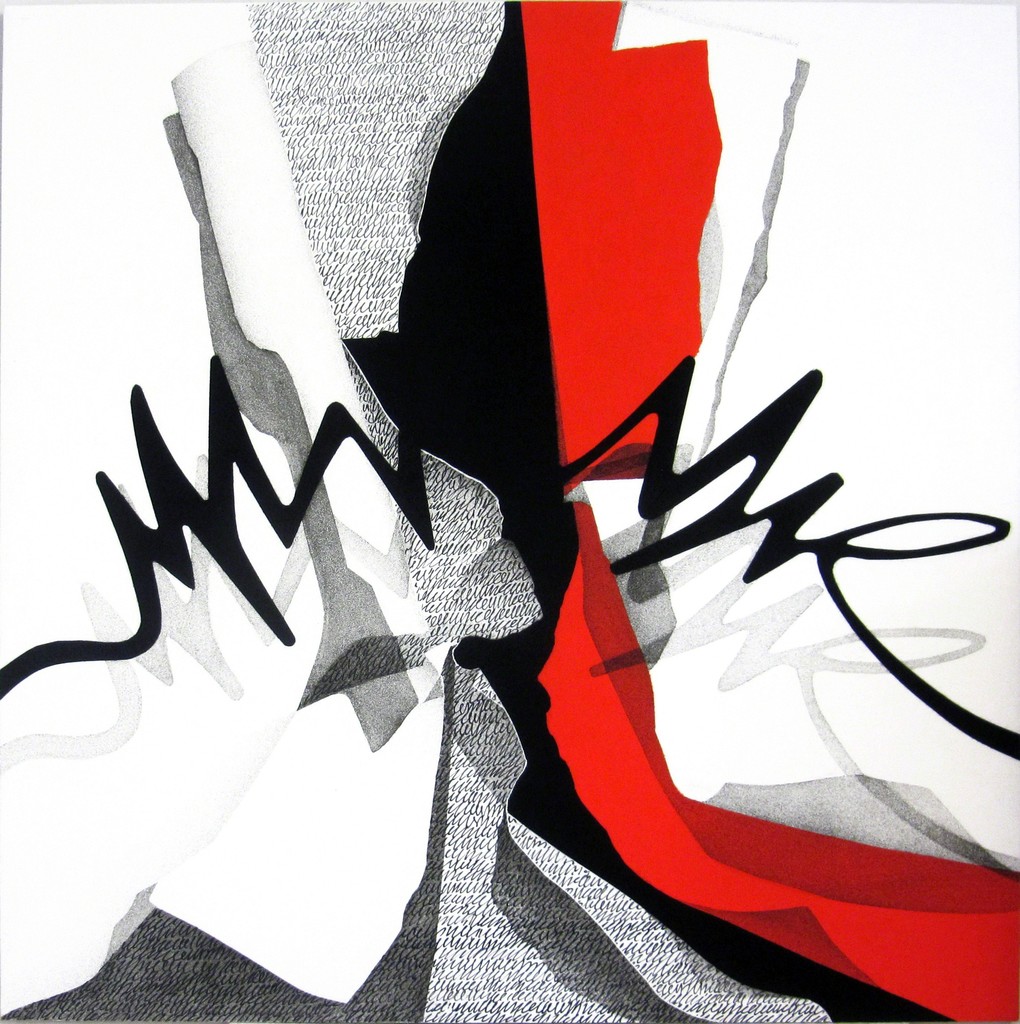 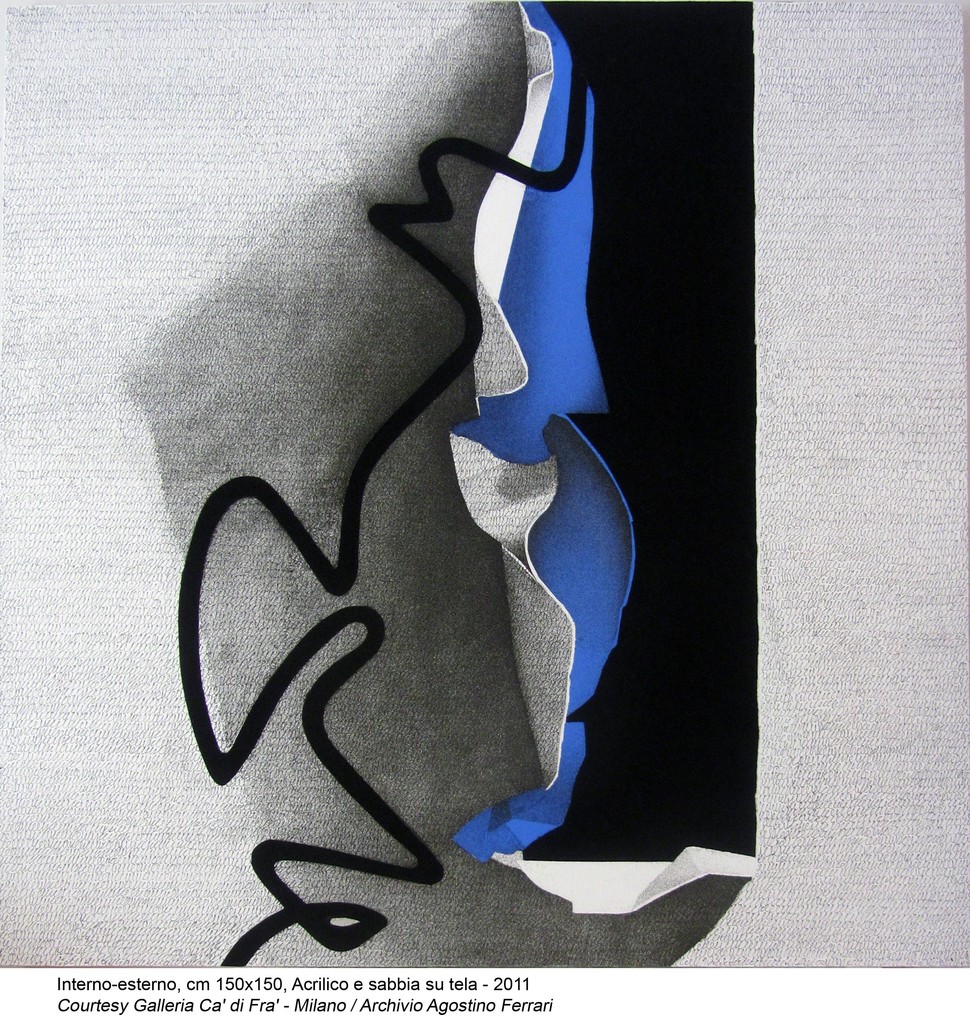 There is an old Walser fairy tale that tells the story of a good fairy and two small children whose wish is to have a clean water supply provided to their poverty-stricken village. The good fairy responds with an interesting gesture: waving her magic wand, as if it were a water diviner, she draws a mark on the ground, outlining a path for the water to follow. Then, at a certain point, she strikes the ground, her gesture shattering the virtual reality, precipitating the gesture into reality by the presence of a copious gush of water pouring out of the ground.

In this way, the symbolic mark made in the ground, and to which the good fairy gave special magical powers, does not follow the waterflow but actually determines the course of the water seen as submissive like it were an obedient dog faithfully following an imaginary master.

In effect, this idea is not so very different from that worked on over several decades by Agostino Ferrari. With his own 'mark', obviously not magical, but clearly artistic, he has been long considered as the leading artist of research and of the relationship of "space" in the world of Art.

Let's take, for example, the in-depth experience behind his work entitled "Internal-External", the most recent of his art presented in this particular exhibition. This work regards a season which is drawn out over many years and encapsulates the entire creative reflection of the artist, hinged around a dynamically-painted laceration-type mark, powerful and robust thanks to the sand covering it which renders it almost material-like in texture. This mark, always created in the same way from the outset using quite fragile and elegant three-dimensional mock-ups, is painted in such a way so as to determine the space around it as well as its surrounding willowy artistry, cleverly reversing the boundaries of a century-old relationship that, in the context of Western art, from Giotto onwards, has always favoured space over shape and space over history. Here, instead, it is the space itself, obedient and flexible, comparable to the mysterious flow of water narrated in our Walser fairy tale, which takes shape, which determines the profondity and significance from the surrounding spirals of the shadows and the dips of the painted "lacerations", separating itself into an idea of a "here" and a "there", a "near" and a "far" or, we could say, a concept of an internal and an external. These are attributes that, for a long period of time, have been somewhat limited to a painted context and to the connotations of a representation but thanks to the skillful use of shadow and of lights and darks, together with the application of volcanic sand, Agostino Ferrari has successfully accomplished a hyper-realistic result. However, also this ancient or, in its last analysis, rather primordial, limiting characteristic of the same language of painting has become progressively more restricted over time, so much so as to cause an encroachment that has today become a sort of habitus in the area of actual space. This is seen in the recent relief artwork which uses coloured laminated metal sheets specifically constituting the overcoming of the representative conditions, favouring instead that of the true realisation of the boundaries of our own experience, of the space around us. But, even in this case, once again and as always, it is the "mark" which is considered the creator itself of the shape, the dimension and even the appearance and colour of these backdrops, these gashes, their irregularities and encroachment of the "here and there" and the "beyond" of the veiled painted surface.

The "mark" itself - considered the protagonist of the artwork - implies an internal time-dimension, a type of experience, a way forward, a "before" and an "after", one could also say, a beginning and an end, which is the there, in that obscure "laceration-type" mark that Agostino Ferrari has often described as a metaphor for the unknown, for the possible, for an unexpressed understanding which is not seen as a threat, but rather as a promise, or the here, in this diffused light which is day-long and predictable constituting our hic et nunc, that is, the visible boundaries of our being.

It has to be said that there is sometimes even a didactic inclination provided by Agostino Ferrari's art, in the need to re-define his language, attributing, from time to time, a physical characteristic to the painted mark, (the metal, in this case, comes out of the canvas rather like the springwater spouting forth from the rock struck by our good fairy), or a symbolic one (the mark is accentuated thanks to the sand on the painting's surface) or yet another, the characteristic of memory (when the mark has been carved or engraved into the surface).

Therefore, using the words expressed by Ferrari himself, it regards reality, then a representation and then again reality but this time, a reality of a sentimental nature, of memories; or rather, if you like, a meaning of positivity, neutrality or negativity, or even that of the present (represented by a jutting-out mark), of something possible (represented by a definite well-drawn mark) and that of the past (a hollowed-out mark or an impression or imprint).

Also this can effectively be considered as a reclamation from a historical moment known as the "Teatro del Segno" from almost half a century ago; noted for its strong conceptual branding in which the artist, Agostino Ferrari, a then-leading figure in the city of Milan where innovative works were created by Fontana, Manzoni, Castellani amongst others, decided to return to the minimum basics of his research, compromising for a moment, also the pictorial value of painting. And so here, now, from a real awareness and perception of the mark, accomplished in that period, has emerged a language of certainty that can be associated with a new-found freedom, with the blissful joy of a shape taking its rightful place in a particular space and the implications which assigns not only a future to it but also a vision.

We can observe that by taking inspiration as a young artist from the excesses that Lucio Fontana obtained by way of making actual slashes in the canvas, Agostino Ferrari decided to instead assign the main part of his research to the mark, though not renouncing his dedication to his painting activity, putting it under conditions so as to gather together the continuous challenges posed by the work of programmed, kinetic and analytical art, without losing any fragment of its natural vitality; in the end, successfully managing to reverse the situation, reconstructing the real space but not beyond it, that is, by not removing or destroying any of the painting's surface, thus rendering it an object-like painting but here, from the crumbling away of the pictorial value a-priori of that same painted surface through its course, or if you like, through the “experience” of the mark, which is always temporary and open. Like life itself, like the "here and now", the present.