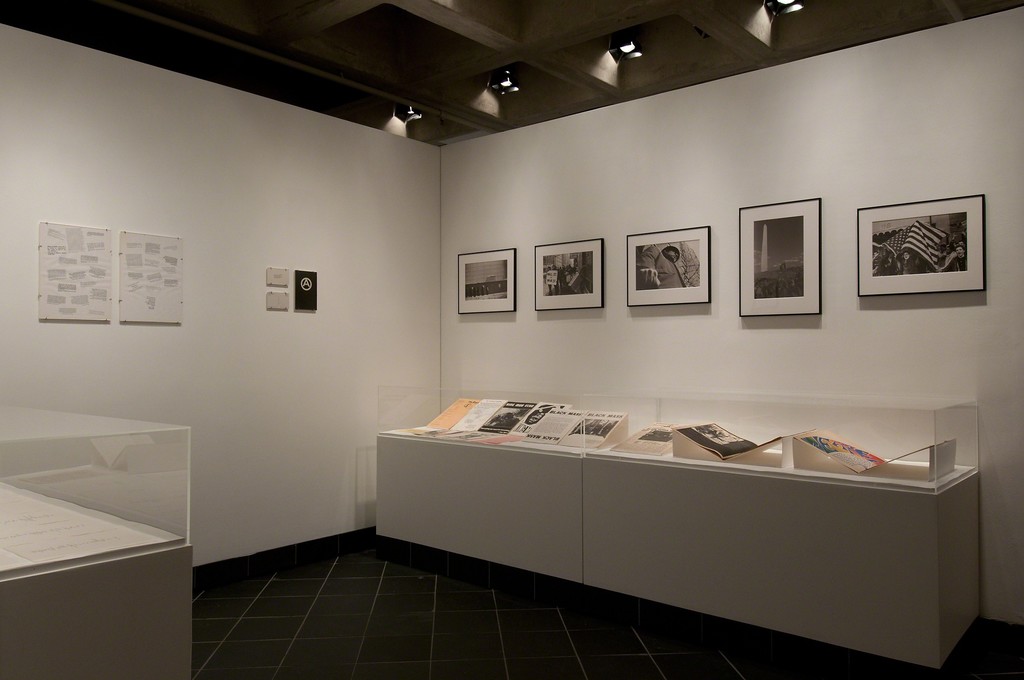 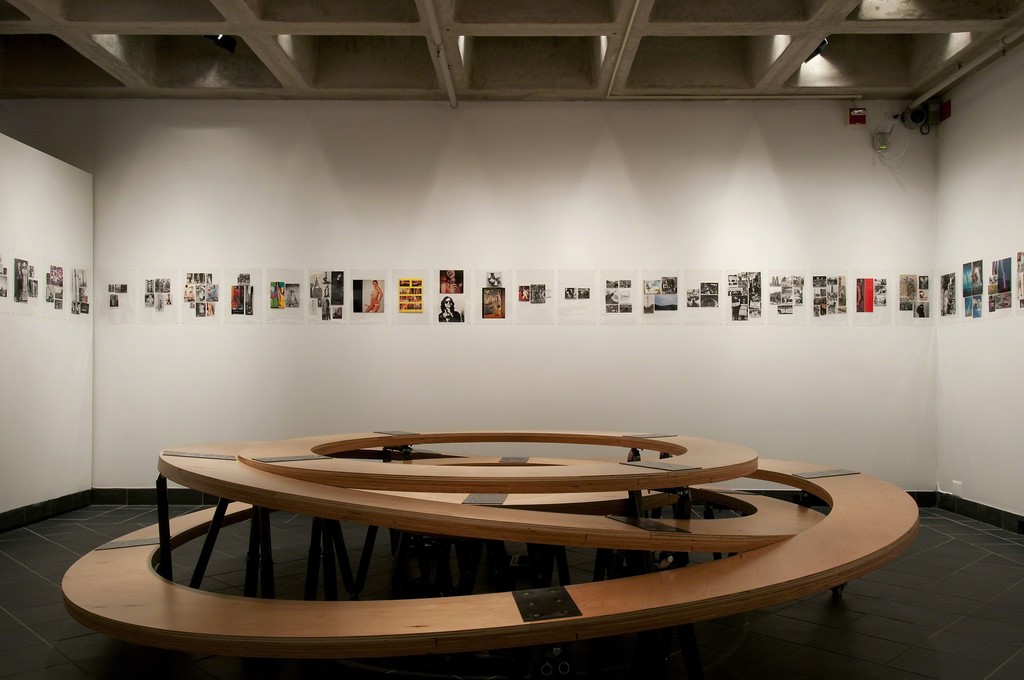 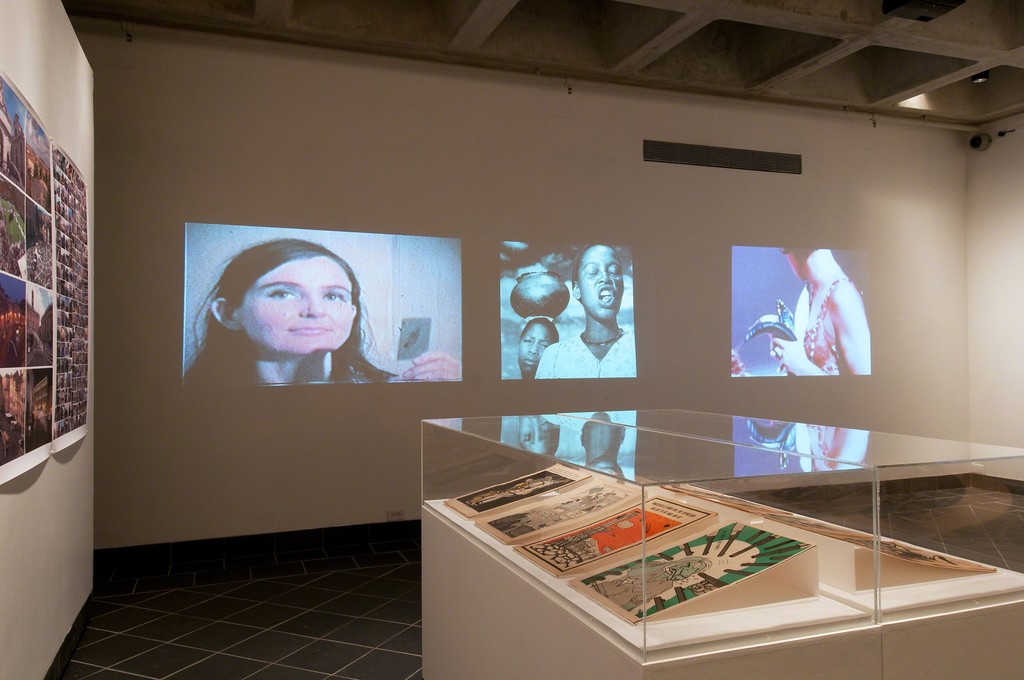 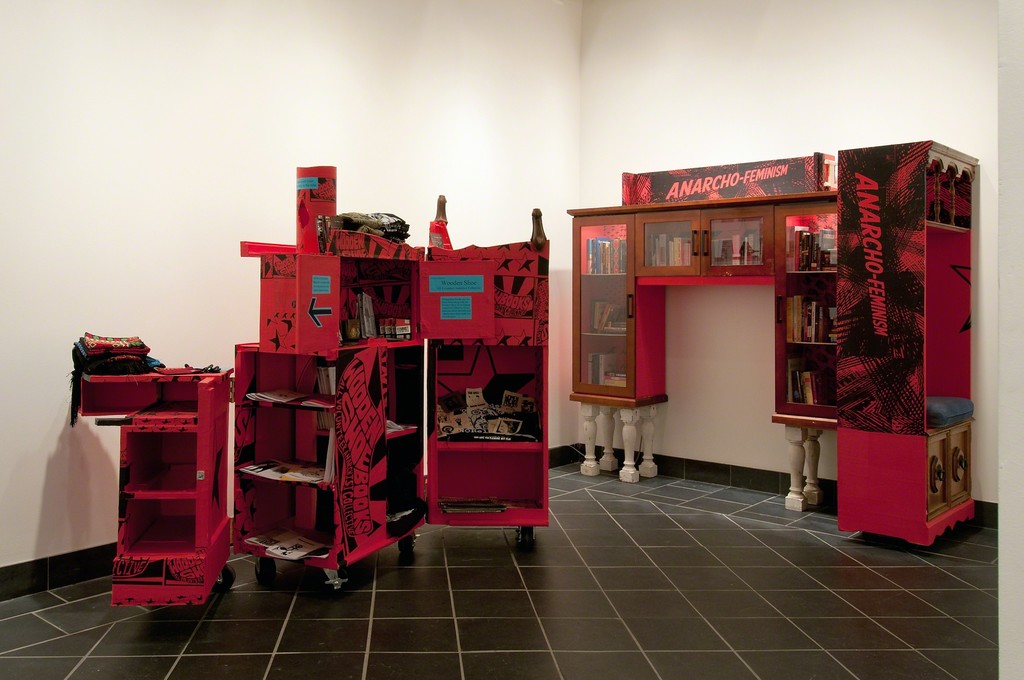 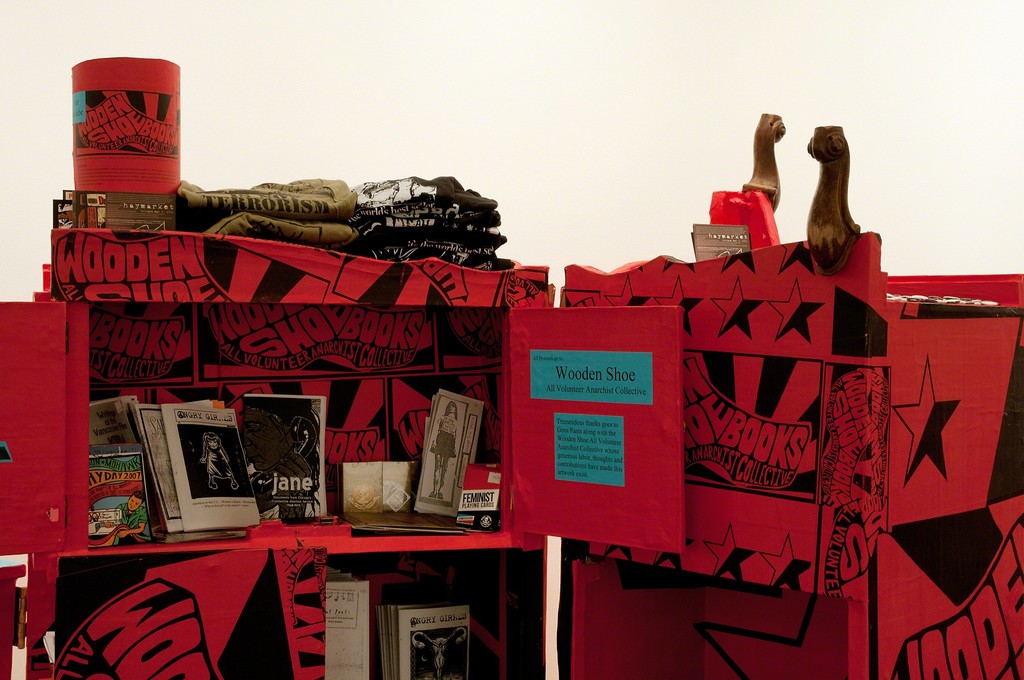 IF I CAN’T DANCE TO IT, IT’S NOT MY REVOLUTION EXAMINES ANARCHISM THROUGH COUNTER-CULTURAL ART AT HAVERFORD COLLEGE’S CANTOR FITZGERALD GALLERY

HAVERFORD, Pa.—Though political activism can have the reputation for stridency, joylessness, and asceticism in service of “the Cause,” early 20th century feminist, anarchist activist Emma Goldman made the case that the freedom she sought politically was a freedom she longed for personally as well. She did not, in her own words, “believe that a Cause, which stood for a beautiful ideal, for anarchism, for release and freedom from conventions and prejudice, should demand the denial of life and joy.” So one can imagine she would also appreciate the work of artists such as New York- and Paris-based film collective Bernadette Corporation and comic artist/Black Flag logo designer Raymond Pettibon, whose works crackle with electricity while exploring political resistance, violence, and freedom with an informal, vernacular vocabulary.

if I can’t dance to it, it’s not my revolution, which runs at Haverford College’s Cantor Fitzgerald Gallery from March 21 through May 2, takes its name from a maxim of Goldman’s. It is the first exhibition to investigate on a large scale the political movement of anarchism through counter-cultural artistic practices in Europe and North America from the 1960s to the present.

The exhibition, which was curated by Natalie Musteata, is organized around three interlinked thematic platforms: Horizontality considers the concept of a de-hierarchized model of thinking and making; Black addresses the relationship between insurrectionary tactics, such as “black blocs,” and the struggles of African Americans to gain civil liberties; and Free love explores a social movement and philosophy that seeks freedom from any social institution (such as marriage), state regulation, or creed impinging on relational or sexual matters.

Each platform features archival documentation, major installations by self-identified anarchist artists, and works that at once affirm and complicate strategies of disruption and resistance. Bringing together artists and free thinkers who work at the intersection of art and anti-authoritarian social movements, if I can’t dance to it explores the in-between space of—that is, the tensions that bind, as well as divorce—aesthetics and political praxis, and the principles of decentralization, collective authorship, and continual experimentation.

Curator Natalie Musteata is a Ph.D. candidate in art history at the Graduate Center, CUNY, where she is writing her dissertation on the contemporary history of artist-curated exhibitions. At Parsons, the New School, she teaches “Art in the XXI Century,” “Art Into Action: Socially Engaged Practices in the 20th Century,” and “Performance and Participation in the 20th Century.” Last year, she curated UNREST: Revolt Against Reason at apexart in New York, and organized a panel discussion, “How Can Art Affect Political Change?” for the Vera List Center for Art and Politics.

Musteata will give a gallery talk for if I can’t dance to it, it’s not my revolution on Friday, March 21, from 4:30 p.m. to 5:30 p.m. A reception for the show’s opening will follow from 5:30 p.m. to 7:30 p.m. There will also be a discussion with Allan Antliff, Canada Research Chair in Modern and Contemporary Art at the University of Victoria, on Monday, April 7, at 7:00 p.m. in Sharpless Auditorum. Additionally, Musteata organized a film series program in conjunction with the exhibition featuring Born in Flames with filmmaker Lizzie Borden (Thursday, Feb. 27), Get Rid of Yourself with independent scholar Anna Komar (Thursday, March 20), and Paths Through Utopia with filmmakers John Jordan and Isabelle Fremeaux (Wednesday, April 9). All films will be shown at 7:00 p.m. in Chase Auditorium. For more information on the programming related to the show, please visit exhibits.haverford.edu/ificantdancetoit.

This show is presented by the John B. Hurford ’60 Center for the Arts and Humanities in conjunction with the faculty seminar “The Anarchist Tradition, Revisited,” with additional support provided by the Distinguished Visitors Program of Haverford College.

Part of the John B. Hurford ’60 Center for the Arts and Humanities and located in Whitehead Campus Center, the Cantor Fitzgerald Gallery is open Monday through Friday 11 a.m. to 5 p.m., Saturdays and Sundays 12 p.m. to 5 p.m., and Wednesdays until 8 p.m. For more information, contact Matthew Seamus Callinan, associate director of the Cantor Fitzgerald Gallery and campus exhibitions, at (610) 896-1287 or [email protected].