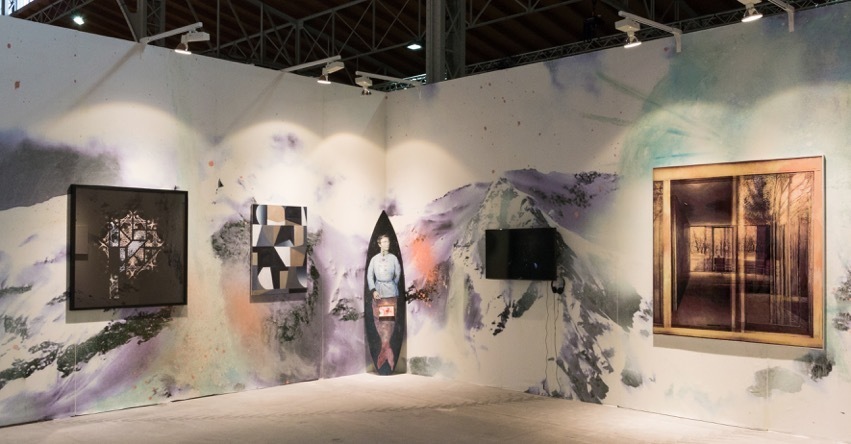 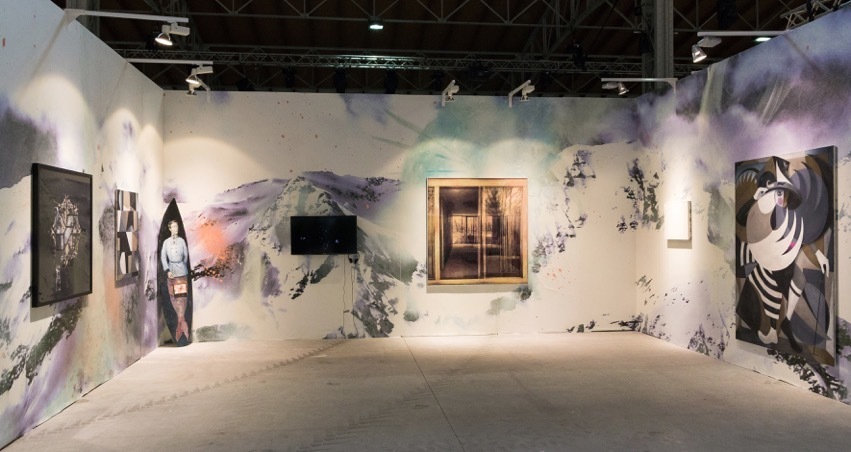 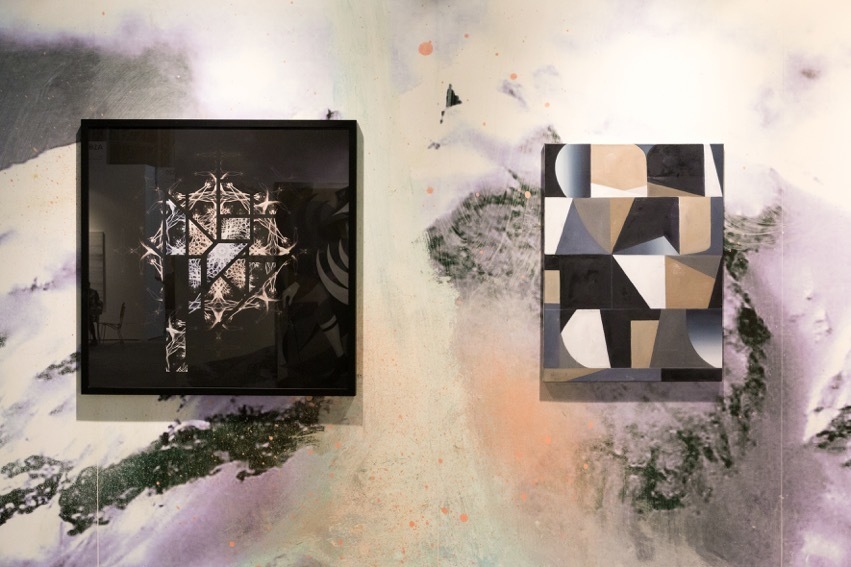 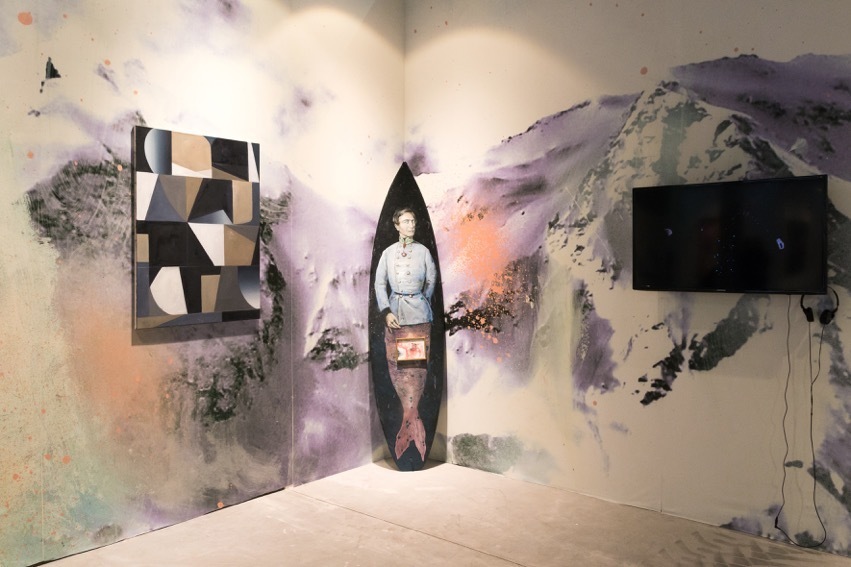 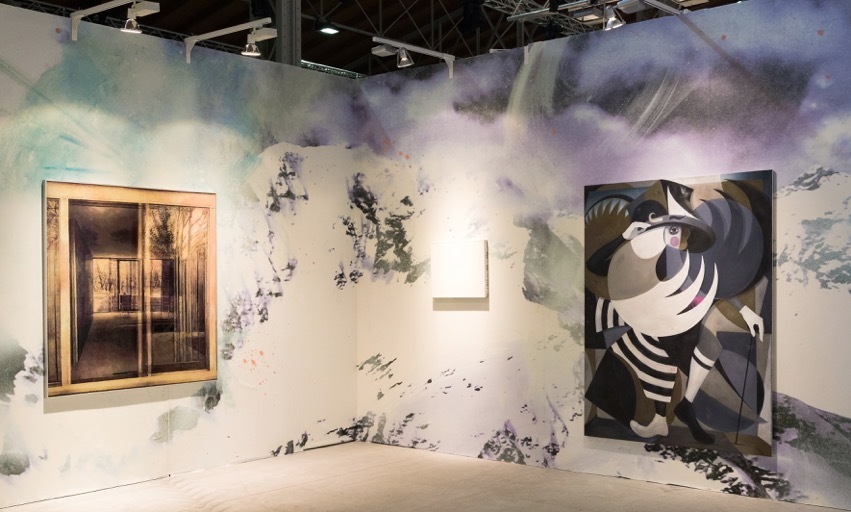 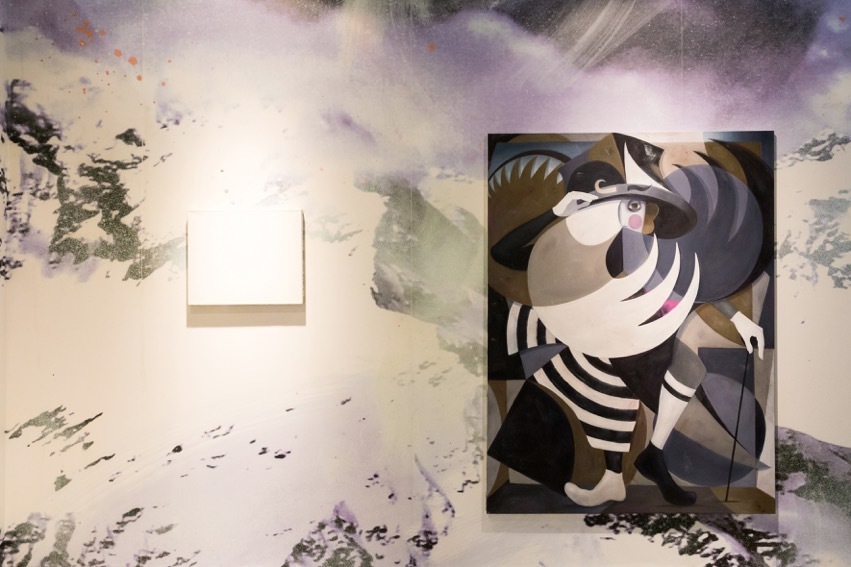 Carbon 12 is proud to announce its 6th consecutive participation at Vienna Contemporary, a project with the works of Bernhard Buhmann, Gil Heitor Cortesão, Hazem Mahdy, Philip Mueller, Anahita Razmi and Ralf Ziervogel.
HEIMATFILM
An attempt at the Anti-Heimat film: This mind developing instrument is the basis for a consistent combination of positions, controversial cultural structures and its borders, curated & conceptualised by Philip Mueller at this year’s Carbon 12’s booth at the Vienna contemporary.
The photo wallpaper, a photograph taken by Mueller, shows the massif of the Gamskalspitzengruppe in Sportgastein, a place known for its “summer wellness” since decades and the heimat film’s backdrop. Hazem Mahdy’s ornamental print, along with Bernhard Buhmann’s layered paintings show their real splendour only on a closer inspection, when unexpected facets of fine deconstruction appear and colours come out so clear that black is no longer recognisable. “The landscape” is continued by Ralf Ziervogel’s calligraphic obscenities whose forms are made out of endless cursing tirades, eating through the viewer’s minds. Anahita Razmi connects audio tracks appropriated from pop songs mixed with the Islamic Azan, when her music video echoes within the massif, or like a record that plays in one of Gil Heitor Cortesão’s rooms since the 60’s (the only place where no one can hear it)... surfing in direction- “Heimat”. German word for “homeland-film” (German plural: Heimatfilme) is the name given to a film genre that was popular in Germany, Switzerland, and Austria from the late 1940s to the early 1970s. They were usually shot in the Alps, in the Black Forest, or the Lüneburg Heath and always involved the outdoors.