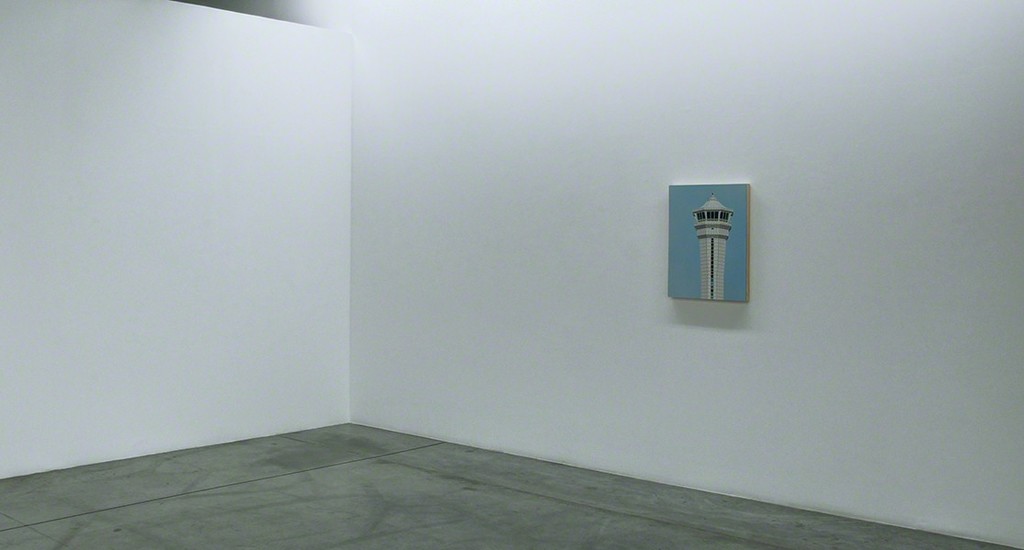 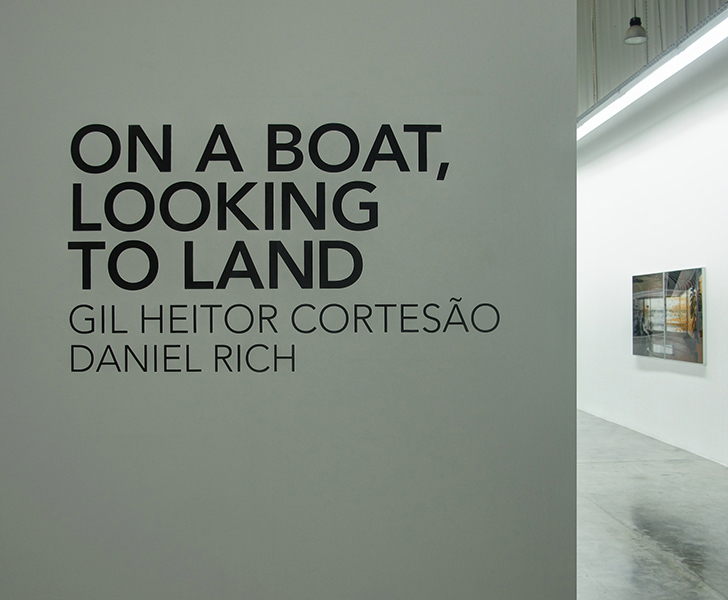 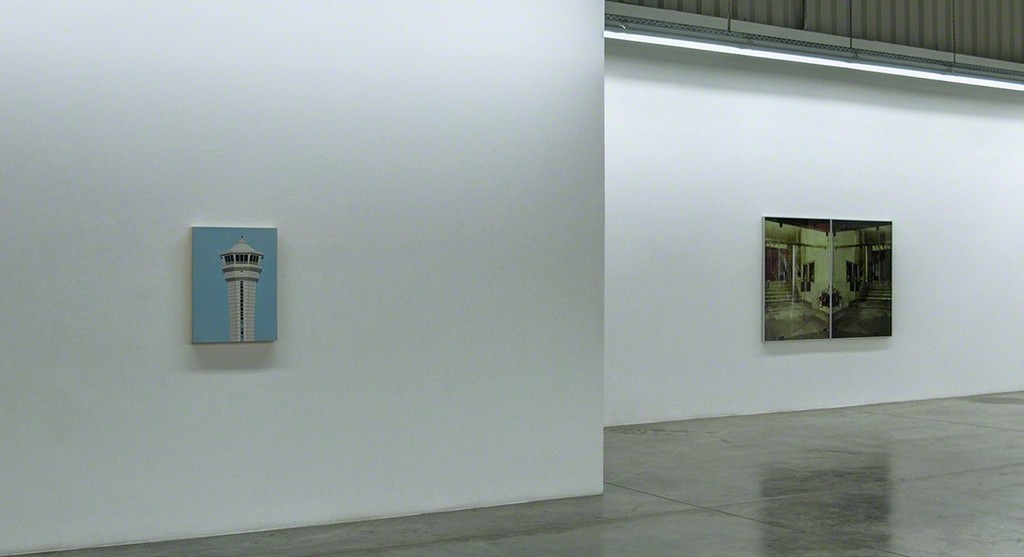 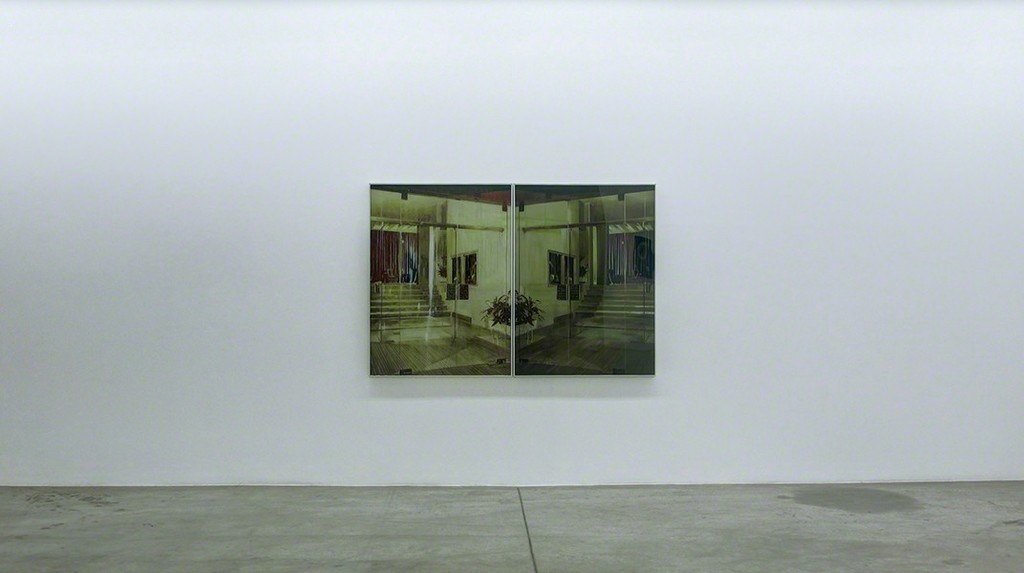 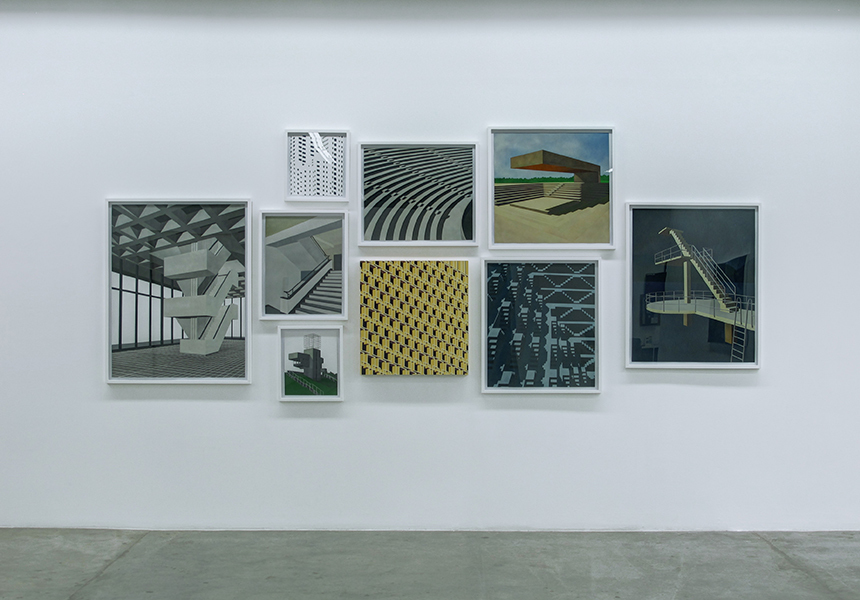 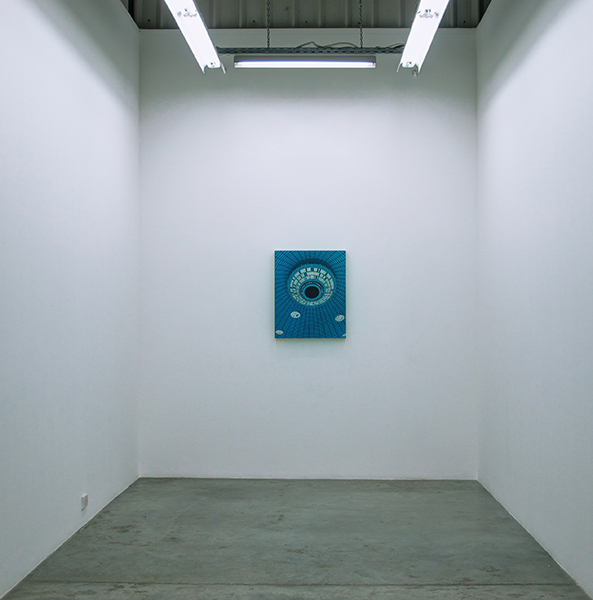 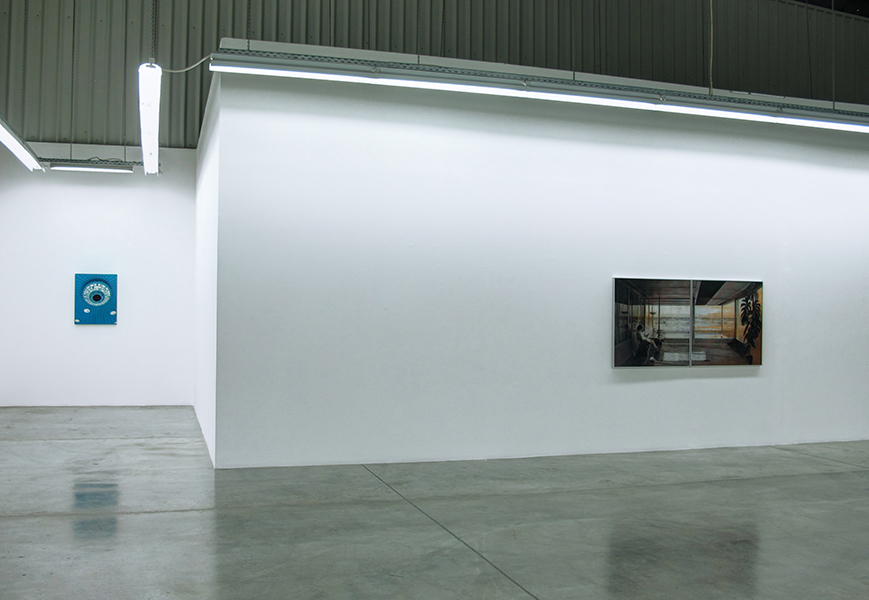 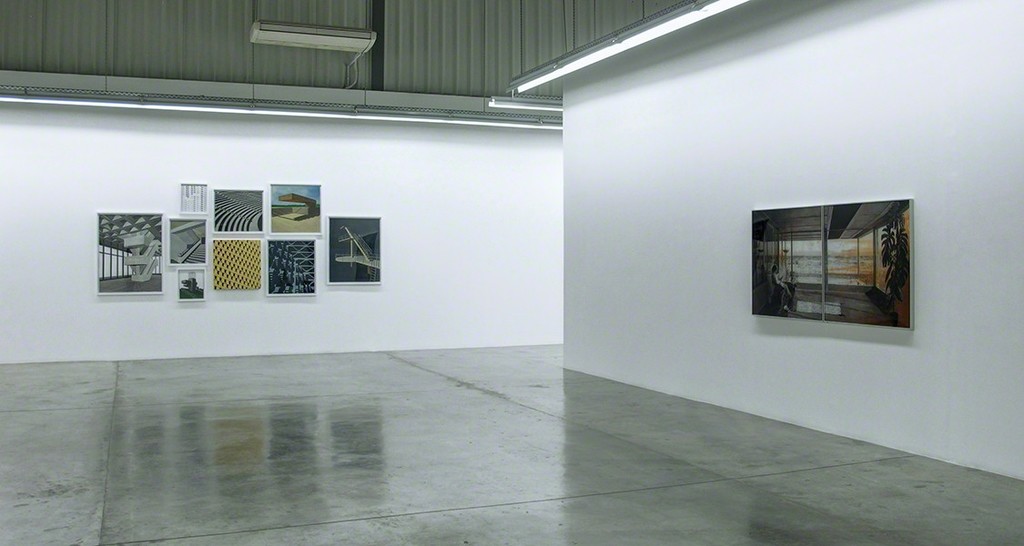 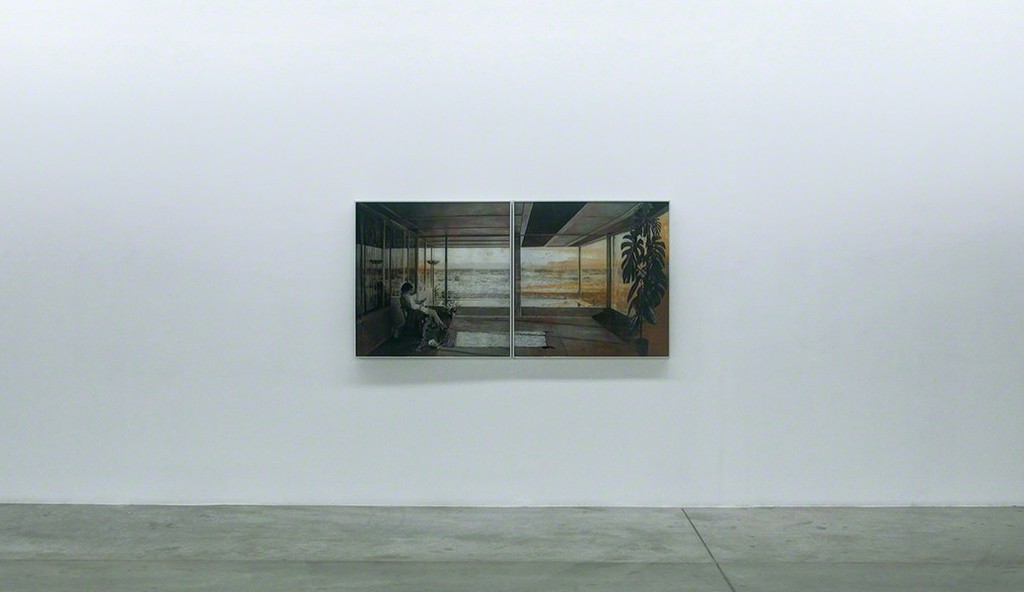 PRESS RELEASE | ON A BOAT, LOOKING TO LAND

Carbon 12 is delighted to present the exhibition On a Boat, Looking to Land, a curated exhibition showing the new works of Gil Heitor Cortesão and Daniel Rich.

In Mike Davis’s 1990 book, City of Quartz, the first line of the prologue reads “The best place to view Los Angeles of the next millennium is from the ruins of its alternative future”. Referring to the crumbled remains of Llano del Rio, the socialist city settlement founded in 1914, and looking towards the newly built aircraft hangars designed to house the military’s latest bombers, the dichotomy is palpable. Two ideologies, still in evidence through their visual signifiers, the buildings their people inhabit. That one is in ruins provides the perfect context to understand the order and strength of the ones that stand. These are different cities, different times and circumstances but the diagnosis is the same. Here we are somewhere between the ruins of new ideas and the possibility of imminent futures.

In a boat crossing a bay on the North coast of the Adriatic, a glimmering, late modernist structure set well into the pines revealed itself to us. Later, after a determined attempt to gain access, we found ourselves roaming around a derelict hotel. An example of late 60’s design, bespoke fixtures, furniture, fittings and lighting. Cantilevered overhangs and balconies. Grand bar areas and dining rooms, pools and gardens. Everything was at once there and simultaneously absent. Layers and layers of history and decay had degraded the scene. Just the indestructible bare bones of the cast concrete structure, delineating the functions of the component parts remained. Some research determined it was built as a casino for international guests (gambling was forbidden to all but tourists in the socialist times of Yugoslavia) and standing amongst the concrete shell, the ‘alternative future’ of another socialist ideology was in ruins. The curious position this placed us in is one of straddling two distinct worlds. Worlds mediated by architecture’s ability to conjure images. In one, the intention is loud and clear. An image of the new Yugoslavia beams from the exquisite modernist detailing and bright white render. An unmistakable voice, the modernist language that screams of forward motion, still readable from our tiny boat. A high-res picture, its message as clear now as then. In the other, the ambiguous, ghostly scene of failure and ruin. The outwardly projected confidence retreated into its shell, transforming the haunted container into a stage for imagination. People eating, drinking, gambling. Living optimistically for the future not among rubble but in modernist splendour. Here in the middle, in the experiential present, these two images persist. One is sharp. Didactic. Impossible to mistake. The other, flickering like old diminished film stock rolling across your view.

In their divergent ways, images of architecture pervade the work of both Gil Heitor Cortesão and Daniel Rich but image plagues the sensibility of architecture too. Building as ultimate signifier of a time and an ideology, the inescapable image of its time and function branded onto its physical DNA. Likewise, when confronted by their work it is striking to see to what extent the images are ‘built’. Like architecture, industriousness reveals poetry and mechanical process reveals ideology. Here in the uninhabitable surface of the image, however, the message lives with a self-referential acuity. Gil Heitor Cortesão’s paintings are bustling with life. People, all be it from a different era, spilling from the picture plane, burning against the plexi on to which they are painted like ghosts seeping through the screen. The degraded image poignantly serving to remind us of a lived past. A nostalgia pervades the utopian possibilities. Daniel Rich’s paintings are not. There is no life to be found there. The paintings are flat and mechanically generated, surfaces as deliberately built as the built environments of their subject. Iconic structures with unequivocal politics pulled from ambivalent news sources, flattened to display their PR credentials. Market value trumping use value, nostalgia and sentiment unwelcome in this scene. In a sense, both Heitor Cortesão’s and Rich’s works are architectures themselves. The failings and misgivings are replicated not brick by brick but layer by layer. A two dimensional approximation offering the same result. A built object as signifier. Daniel Rich peels built up layers of meticulously masked paint away to expose architectural detail, generating a surface of considerable construction. Gil Heitor Cortesão works in reverse, always exposing the ‘inside’ of the painting by starting with the foreground, covering it up with the next layer. Working on Plexiglas, blindly building himself out of the process to reveal a surface on the other side. Both artists employ appropriated material, layered and filtered through these processes, lending the work a distance from the source that allows the isolated imagery to autonomously perform.

Like the buildings they depict, the paintings of Gil Heitor Cortesão and Daniel Rich hold in a duality the process of their own making and the allegorical intention of their own condition. If architecture can never be free from its self-imposed image, providing the signposts to where we are, then stood in front of the work of these artists we can perhaps determine that we are on disconcerting ground. As in the Haludovo Hotel or in Llano del Rio of Mike Davis’ LA, we stand here between two planes. There is solid form and there are ghosts. The emotional and the political. The built image and the projection. The paintings are as built as the buildings they describe but we cannot inhabit them. The paintings can only house the traces of what architecture can be. From the outside looking in, we might ask where this leaves us. We’re not playing volley ball on a beach in the 1950’s nor are we under Pyongyang’s stadium roof but we know these scenes and we know what they mean. Images that we find and the ephemeral images buildings and their intrinsic conditions reflect beset us. They locate us in the way both architecture and images always do. But here in front of these works that simultaneously tell of exteriors enfettered to the ideology of their making and the nostalgic interior lives driven by optimistic humanity we are somewhere that locates us most accurately of all. Somewhere, amongst the ruins of an alternative future.

b. 1967, Portugal. Lives and works in Lisbon, Portugal

Having studied at FBAUL, Lisbon and Licenciatura em Artes Plasticas, Pintura, Cortesão's largely Europe-based exhibitions display his realistic painting technique of architecture, both interiors and exteriors, which exude a tone of melancholy stillness, as though abandoned, but not forgotten. Cortesão disrupts the illusion with explorative paint splatters and surface manipulation of his paintings on Plexiglas. He has exhibited in several institutions including CAM Centro de Arte Moderna and Fundacao Calouste Gulbenkian, and is part of the permanent collections of the ARCO Foundation (Madrid), MUDAM (Luxemburg) and Fundacion Pedro Barrie de la Maza (A Coruna), amongst many others.

The architectural relevance introduces a dialogue of changing political power structures and deconstructed utopia. Translating political and social structures into methodical paintings, he works from web images and transforms them into hand-cut stencils paintings through an intricate process of layering and spraying creating smooth, even surfaces. Rich received his BFA from the Atlanta College of Art and a MFA from The School of the Museum of Fine Arts and Tufts University. His works have been exhibited at the Museum of Fine Arts Boston, the Maramotti Collection, Peter Blum Gallery New York, Maison Particuliere Brussels and many more.