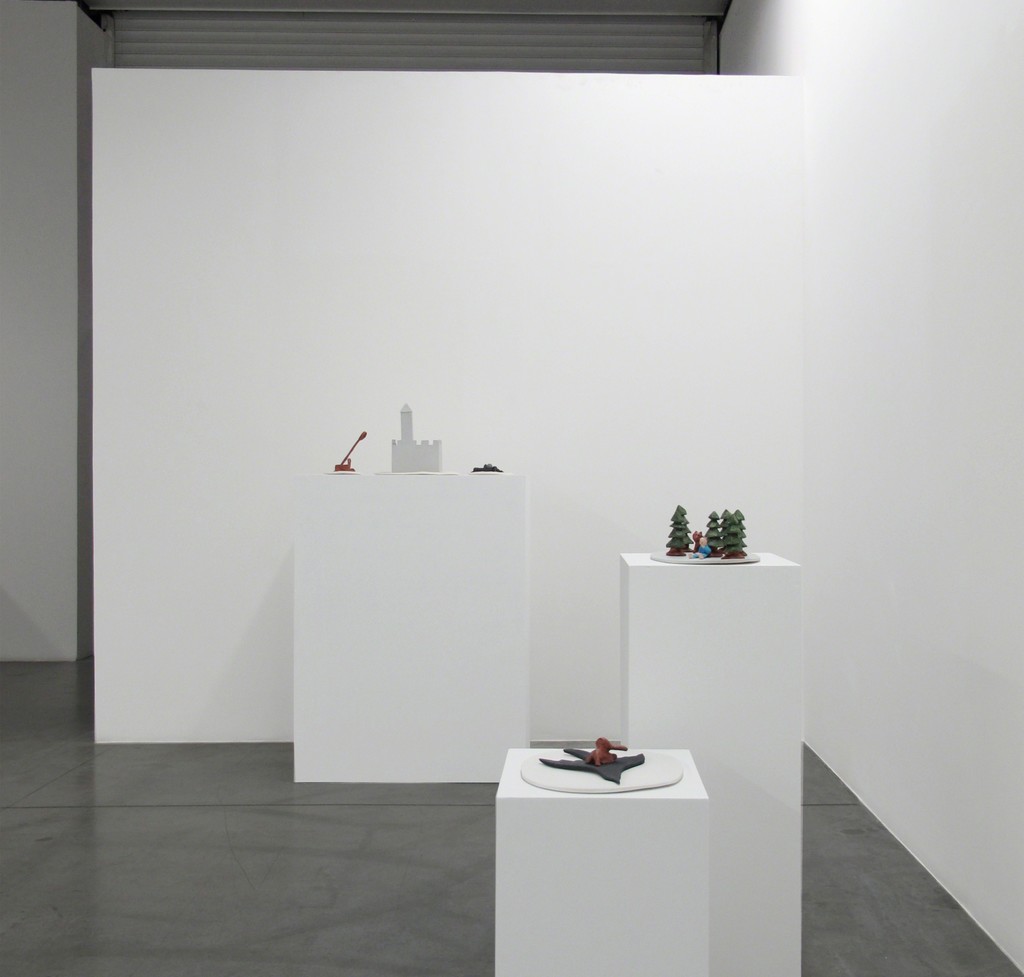 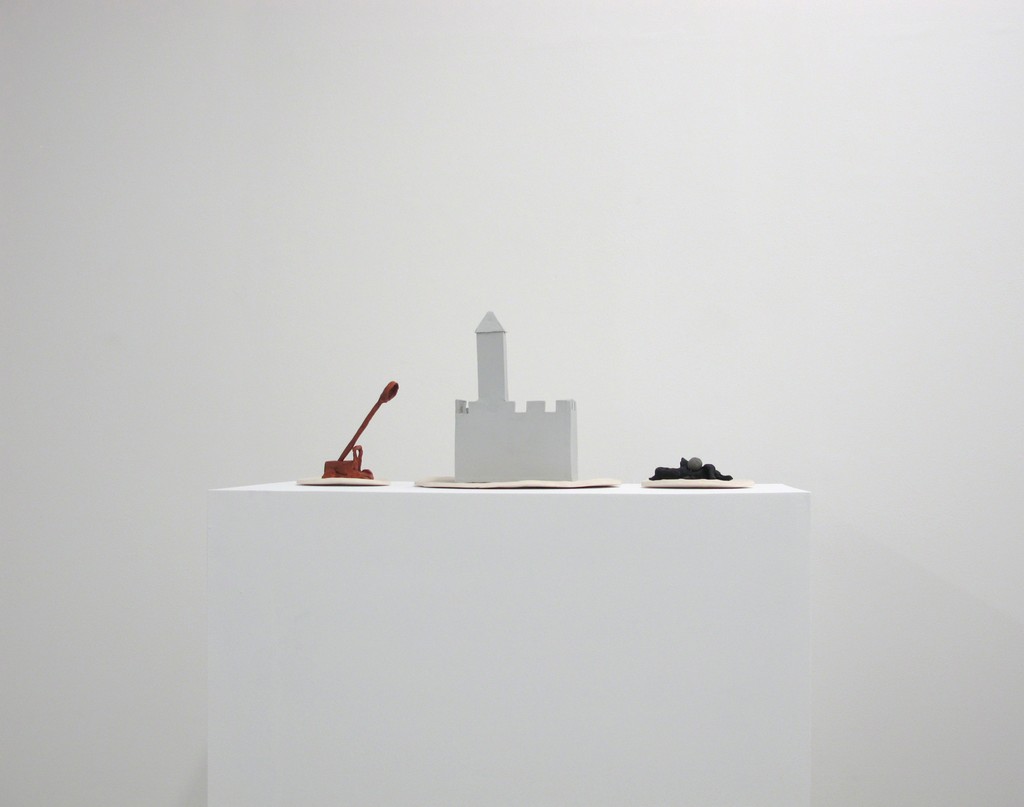 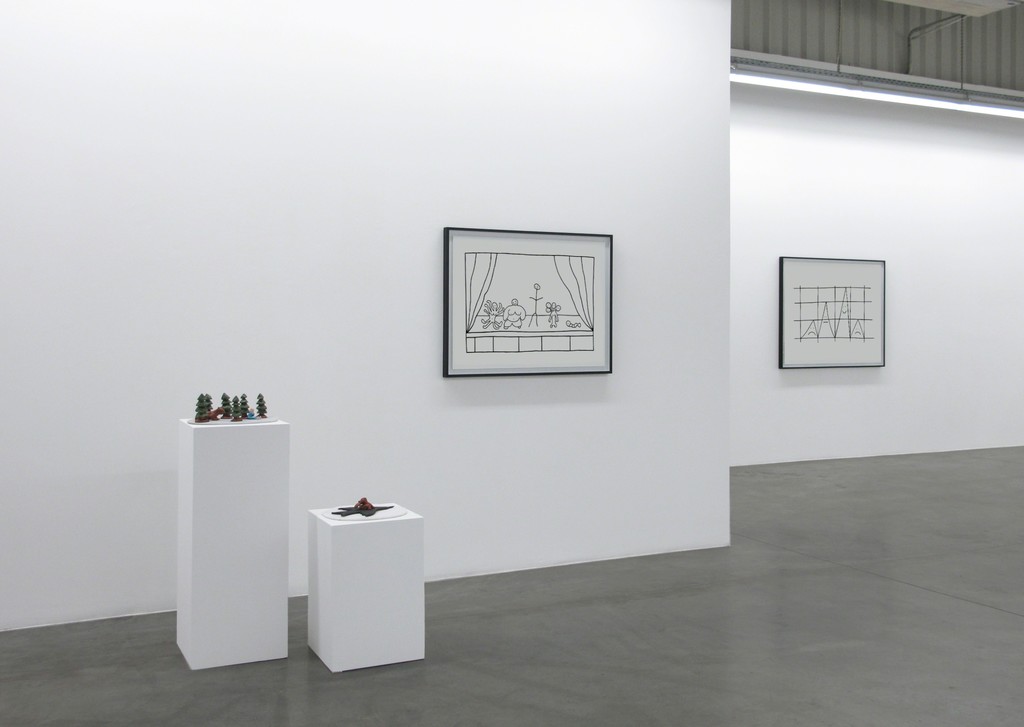 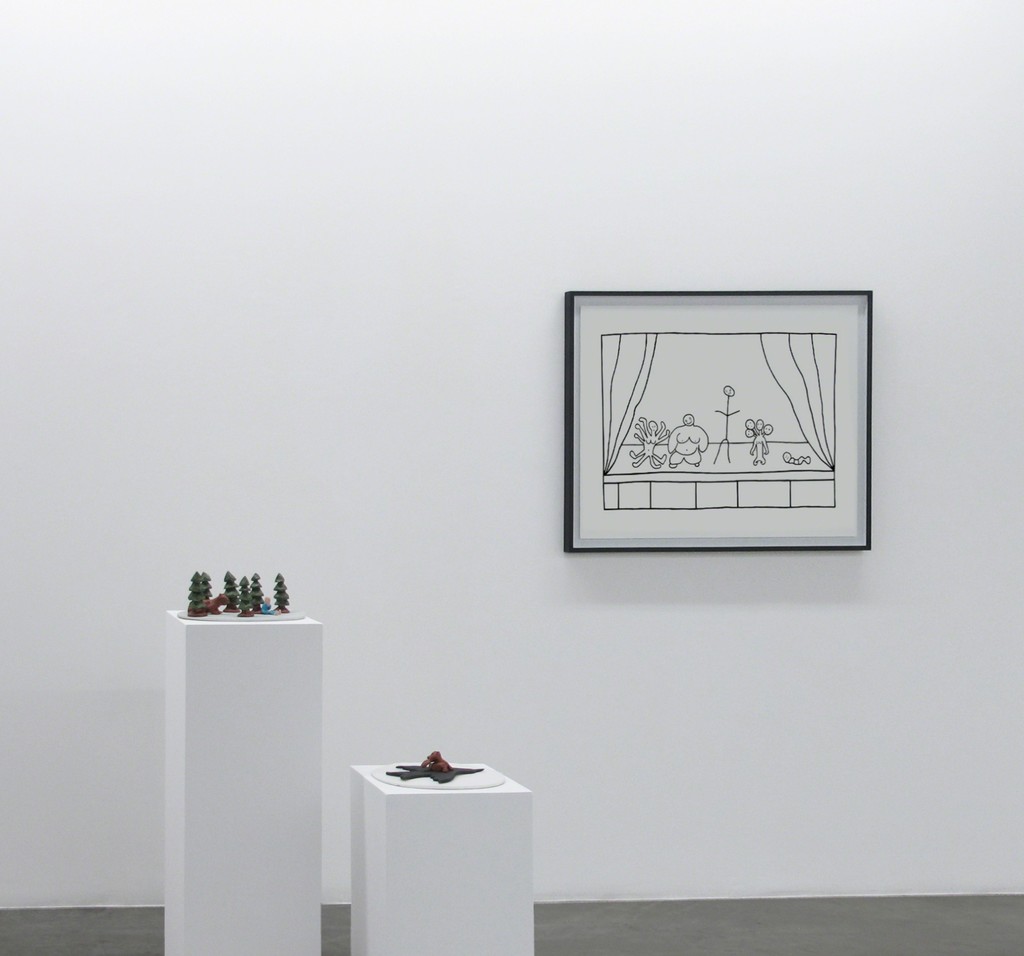 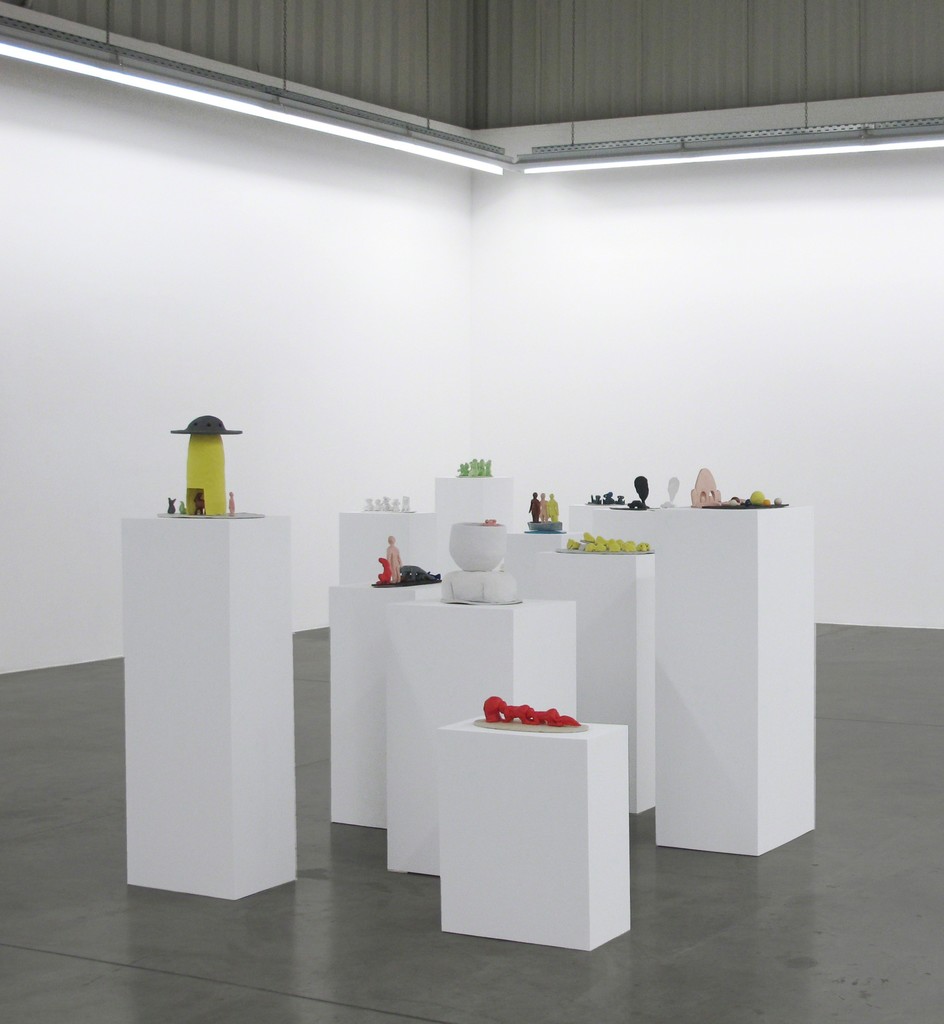 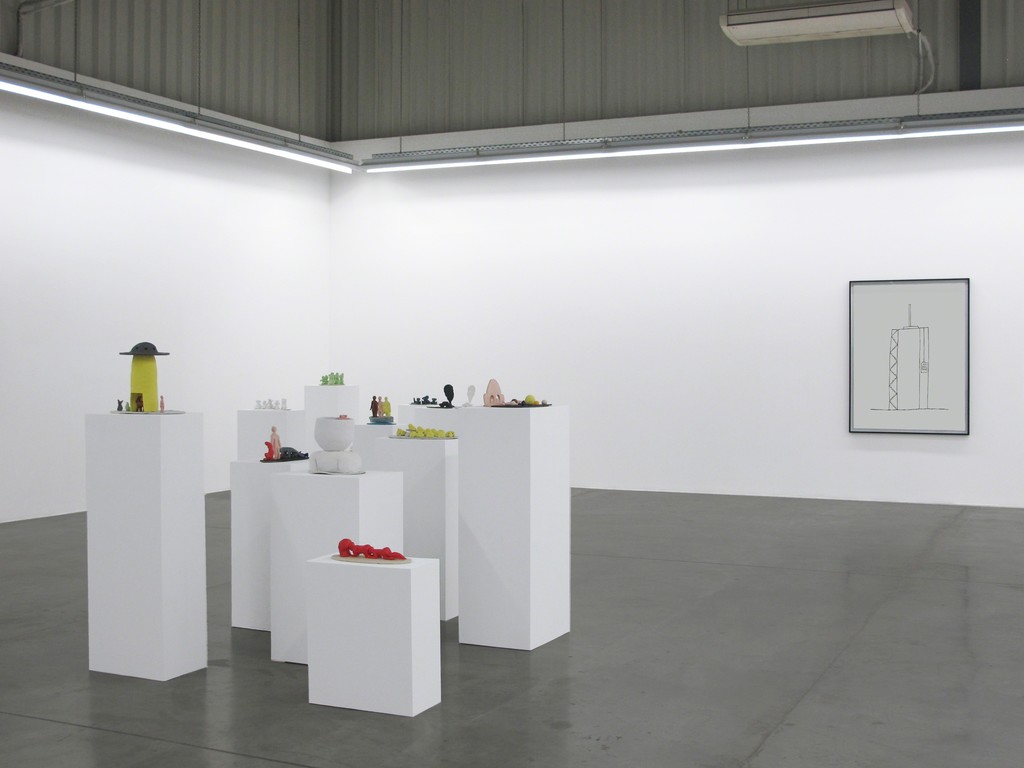 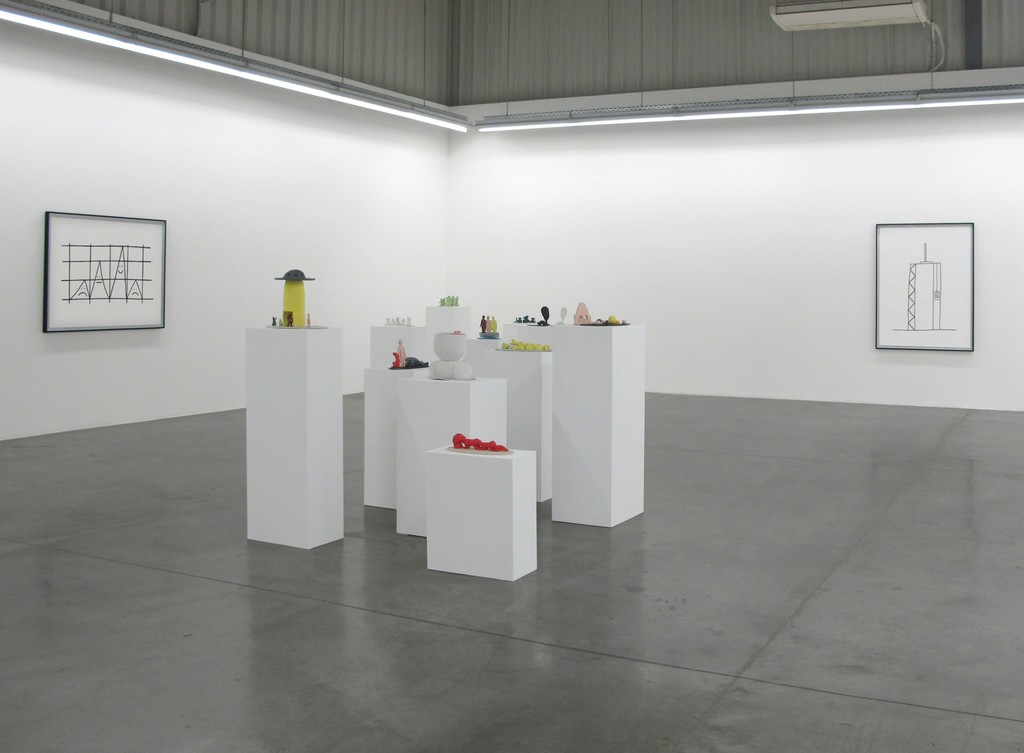 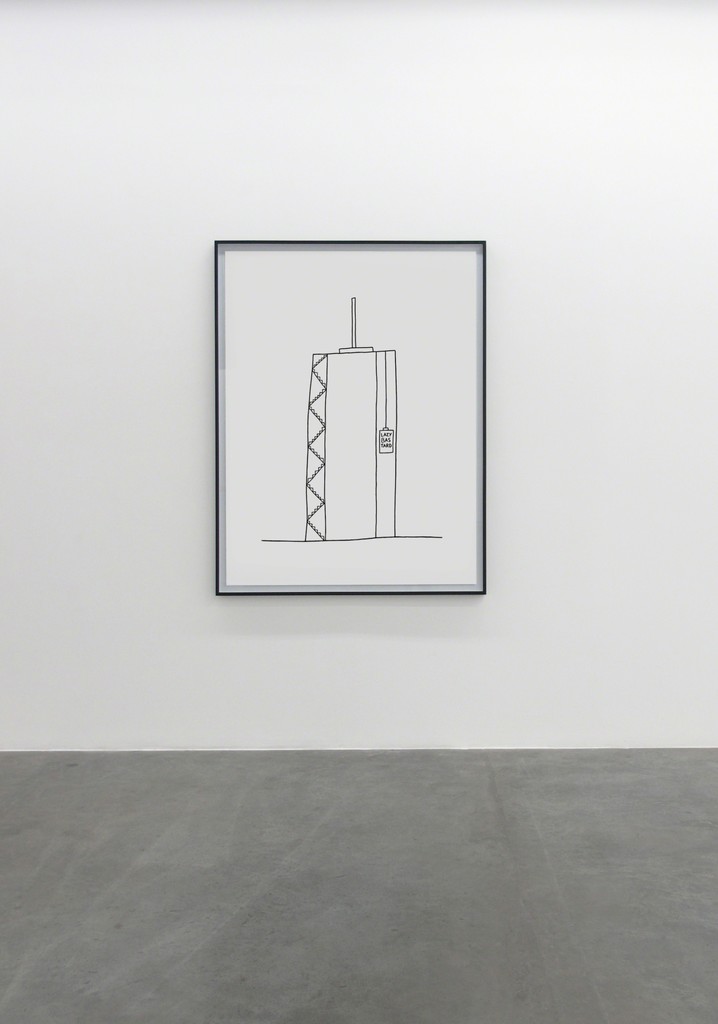 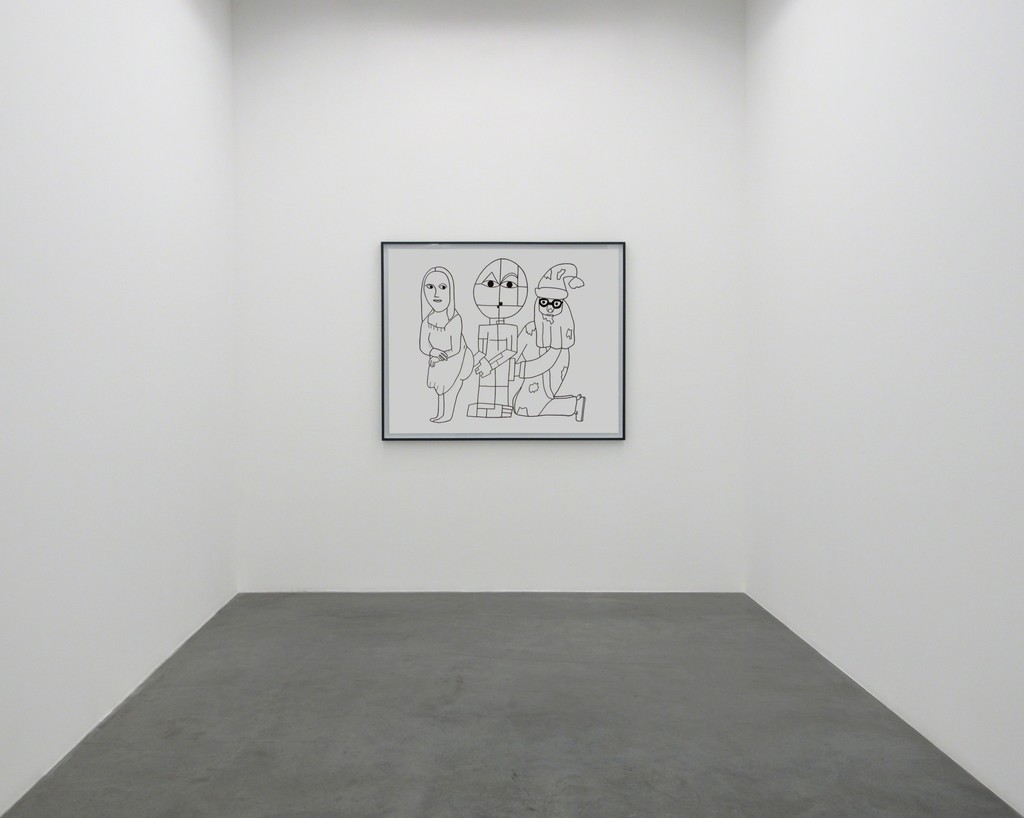 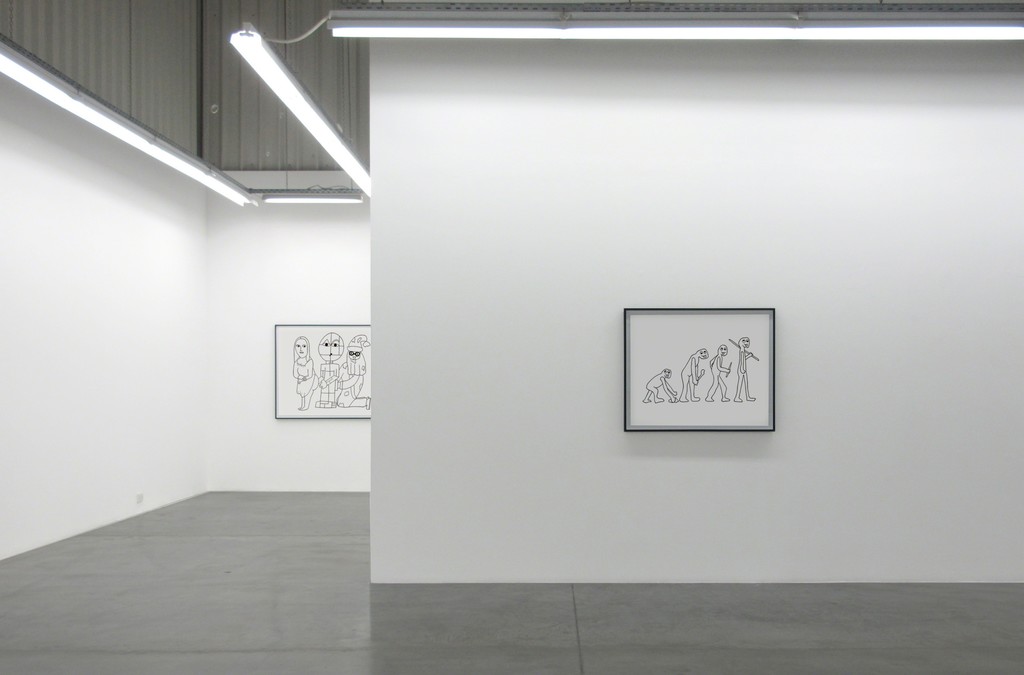 There is something a little playful and a touch brut, but certainly not naïve, in the works of Swiss-born and New York-based multi- disciplinary artist Olaf Breuning. In his latest solo exhibition, Breuning continues his category-defying exploration and observation of the human experience with absurdist drawings serving as the starting point alongside a new series of miniature ceramic sculptures. The Good Old Evolution is the chance for viewers to bear witness to his endlessly buzzing mind reverberating outwards to form an abundance of works that indicate there is no fatigue here, rather, only a hunger for more. But what demarcates this body of work is the viewer’s confrontation with his tactile process - they can see and feel Breuning’s hands within the ironic verbal play of his monochromatic line drawings or in the molds of three blue whales and a pile of Breton-stripe clad figures. Despite stylistic innocence - “I like that: Simple” he remarks - there is something delightfully cheeky in the layers of context, reference and interpretation with which he engages.
The tone of any Breuning work is that of lightness, organic creation and spontaneity, which stems clearly and directly from being both an active and passive player in day-to-day life. He addresses cultural and political issues and infuses his art with the realness of a world dominated by media, pop-culture and globalization, and this subtle amalgamation of freshness, relevance and hand- made imperfection grounds Breuning’s Dada-ist commentary. Neither kitsch or pop, or even as simple as “simple”, this is an artist who has created a visual language based on the continuously evolving present – it is our reality and he is, after all, an observer. It is as simple as that.
– Katrina Kufer, October 2016
Olaf Breuning
b. 1970, Schaffhausen Switzerland. Lives and works in New York, USA
Olaf Breuning studied photography at the Zuercher Hochschule der Kuenste and Winterthur (CH). Breuning’s artworks, in whichever of the plethora of mediums it emerges in, deals with the “big questions in life” through a language that merges mass- culture and art manifesting a body of ephemeral works made permanent via artistic documentation constituting of humorous art without ridiculing art. Breuning has had over 280 exhibitions and several public installations and permanent public sculptures in various locations in North America and Europe, proving a fixture in the contemporary culture (not only arts) scene.