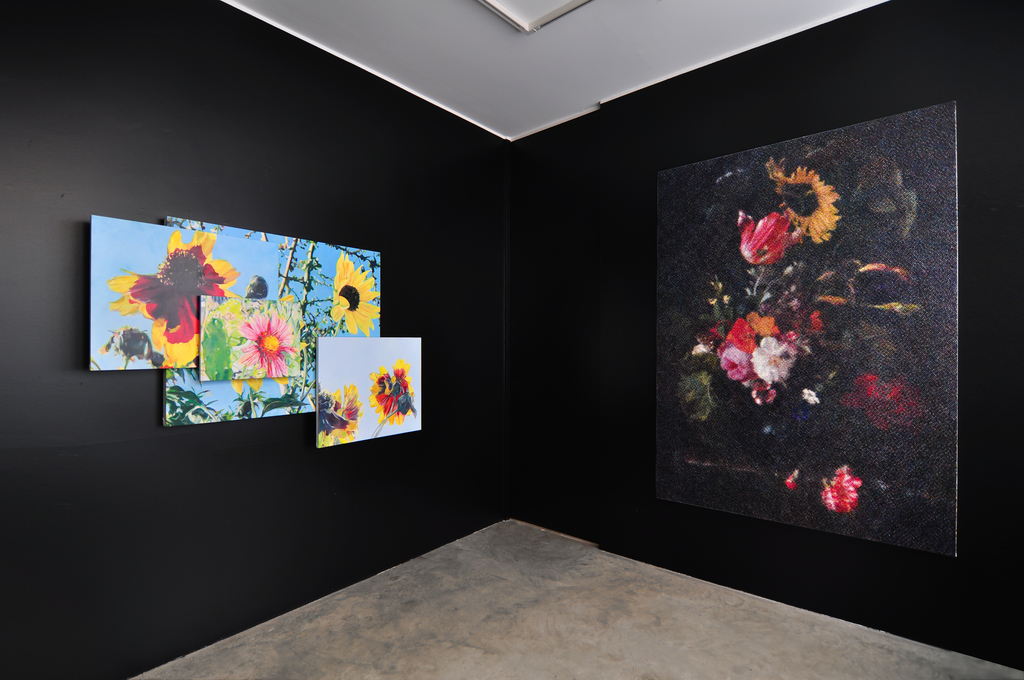 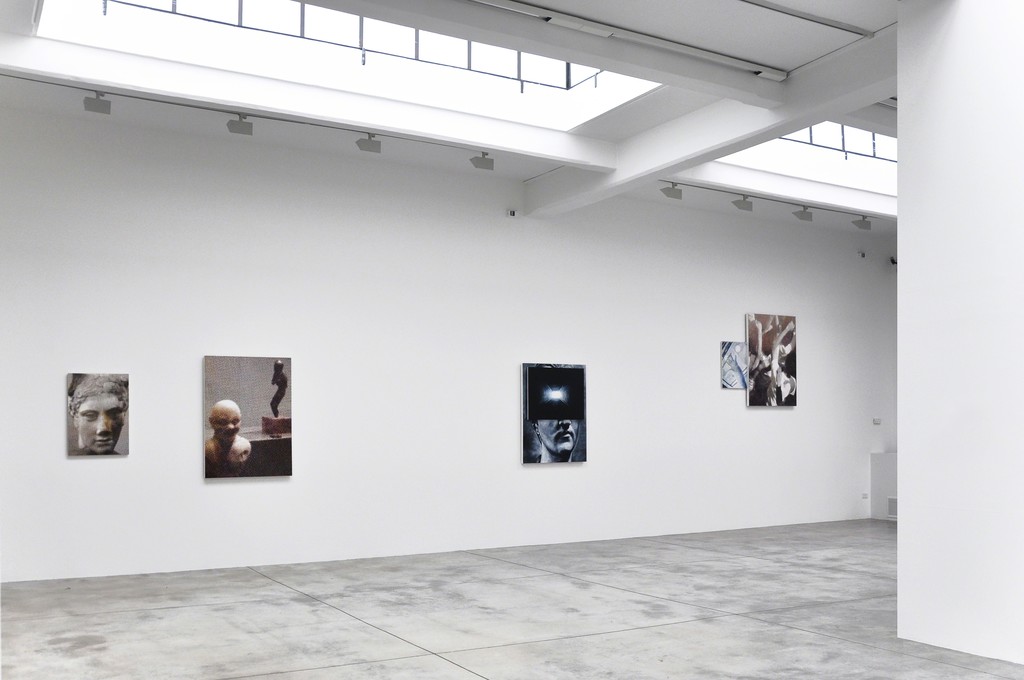 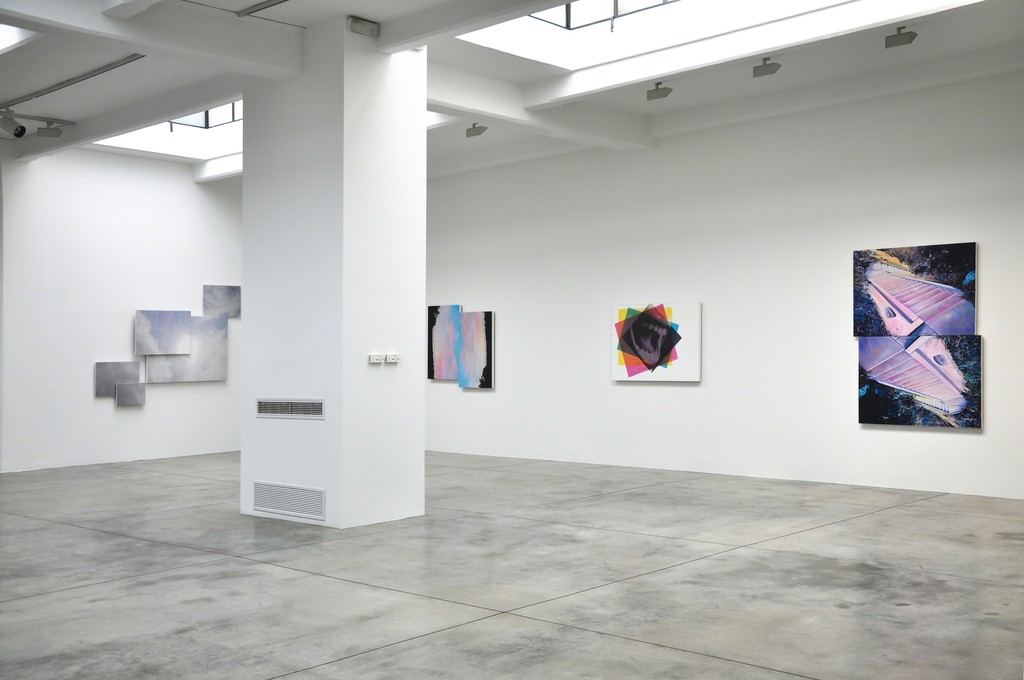 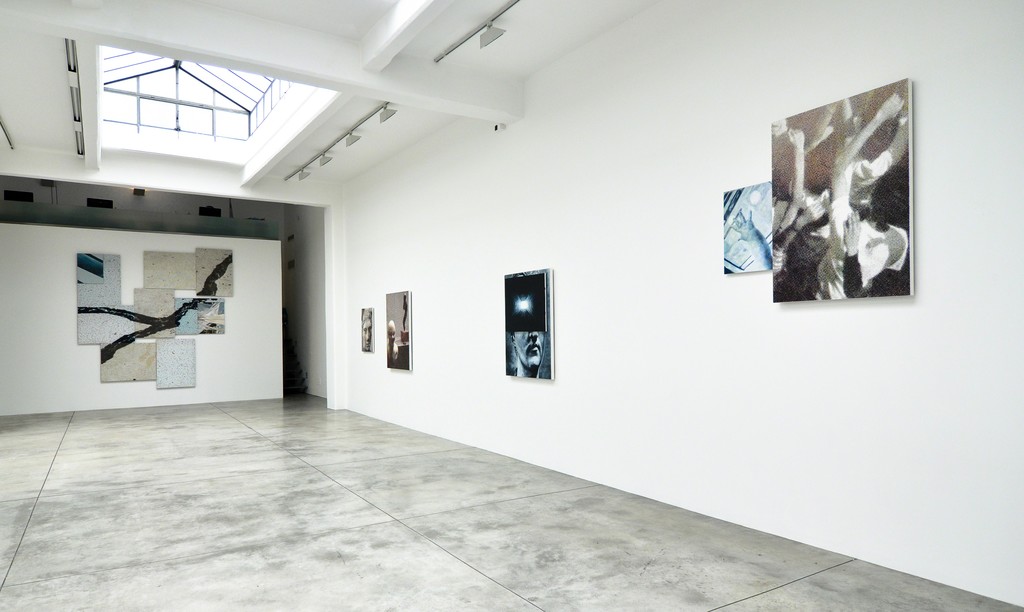 Mark Flores' artistic production develops out of his dialectic relationship towards the digitalization of reality. This young Californian artist constantly reproduces in his paintings fragments of reality, which he has previously photographed while wandering on foot around Los Angeles. Thus his work juxtaposes details of street signs to close-up portraits of flowers or fragments of fleeting clouds in the sky, to his interpretations of old-master paintings seen in various museums. His pictures are mounted and fragmented in a series of panels that are superimposed and installed in such a way that the clash between pictures painted with contrasting techniques offers a personal sampling of reality in which urban details and quotes from art history and landscape photography blend together with startling and hypnotic results.

Flores solo show at Cardi Black Box New Arrangement, can be considered the ideal development of this year’s site-specific intervention See This Through, presented at the Hammer Museum in Los Angeles. Once again through a complex multiplicity of images, Flores constructs a narrative, which is reinvented and transformed by each viewer into a personal poetic universe.

The paintings presented in Milano with their metamorphoses, mark a unique and subtle formal compromise between abstraction and representation. Apparently expressionist pictures are installed together with realistic images painted in a ‘semi-pointilliste’ technique in which the image appears mechanically reproduced, through the overlapping of CMYK dots (CMYK is an acronym that indicates the four-color-process used in contemporary color printing. CMYK refers to the four inks used: cyan, magenta, yellow, and key black) disintegrates in an abstract blur when the viewer approaches the painting.

Flores’ continuous formal experiments are linked to the fact that his artistic investigation does not focus on images in themselves, but on the desire with which we relate to them. This is why his paintings mime our fetishist relationship with reality, in our constant need to posses the present through a series of photographs (often taken with our mobile-phones) in the illusion of understanding our past. Mark Flores’ paintings, indeed, are by no means expressionist, but instead instrumental: as they seem to allow objects to communicate directly with the viewer. His images express the existing contradictions between the symbolic and the subjective value of images. The fact that his paintings reinterpret, in some way, different phases of the photographic process, underlines a serious reflection on the possibility of reproducing reality and how this can impact our relationship to what surrounds us.

Infact this exhibition can be read as a representation of the contemporary need of capturing the contingency of reality by stopping time’s flow. Examplary are Still Life with Flowers, (Van Aelst), a work based on a photo Flores took of a famous painting by Willem Van Aelst, an important seventeenth century Flemish painter, who created a 'vanitas' (an allegory of the fragility of human life) by portraying a delicate bunch of flowers. As in the original, in Flores' version the contrast between the beauty and the fragility of the flowers works as a memento mori, whose message becomes even more explicit because the details of the composition appear clear from a distance, but disintegrate into a series of colored dots when the viewer get closer. In this way Flores confronts us with the impossibility of visually capturing the object of our desire. Similarly in the composition New Flower Arrangement, where the image is deconstructed in several panels, Flores plays, once again with our need to fix images in our imagination. This piece, created by a series of digital photos taken by the artist to flowers growing in a public park near his studio underlines how transient, and contradictory our relationship with nature can be, and reflects the impossibility of capturing through images the passage of time. Flores' work, through a singular negotiation between personal expression and empirical rules, is structured on the assumption that there are no ‘new’ images in contemporary society and that the conflict between objects and their reproduction, as well as between subjects and objects, is what makes art and in particular his paintings so fascinating.