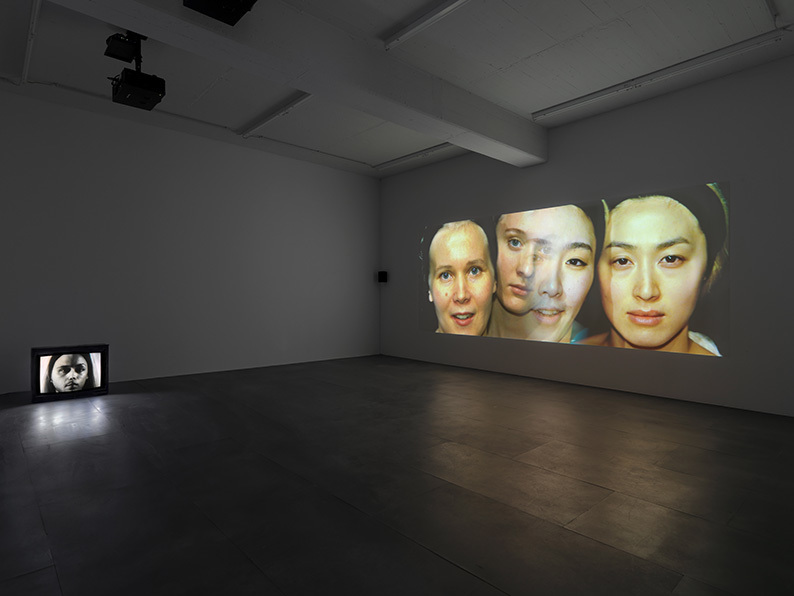 ‘Imagine, talking and talking. I've been talking about myself all day and you've listened. How boring for you. What could possibly interest you about my life? I should be like you.
You know what I thought after seeing your movie that night? When I came home and looked in the mirror, I thought, "But we look alike." Don’t get me wrong. You're more beautiful. But somehow... in some way we’re alike. I think I could change myself into you. If I really tried. I mean, inside. Don’t you think so? Of course you wouldn’t have any difficulty turning into me. You could be me, just like that. But your soul would stick out everywhere, it’s too big to be inside me. It would look all sort of odd.’

In his installations, video pieces and performances, Ming Wong examines the nature of identity from cross-cultural perspectives. He has drawn inspiration from filmmakers such as Fassbinder, Pasolini, Visconti, Sirk, Wong Kar-Wai, Polanski as well as exploring classic cinema from his country of origin, Singapore. Almost all of his pieces deal with language barriers in juxtaposition to the ostensible universality of film-image.
The exhibition Jag skulle vara som du / I should be like you restages haunting images and moments from Ingmar Bergman's film Persona which explores the relationship between an actress who, in the middle of a stage performance, loses the will to speak, and the nurse who is assigned to look after her. For convalescence, the two women leave the urban world and go into exile on a remote island. Over the course of a summer, the identities of both women become increasingly intertwined.
Originally conceived as a visual art performance event and now reconfigured as an installation, Ming Wong’s project shifts between the literal, the parody and the transformative in his thematic exploration of communication and doubling, the definition and boundaries between cinema, theater and performance.
In the first room of the exhibition is a projection of a moving strip of close-ups of three distinctive and expressive parts of the human anatomy : eye, mouth and hand. These were taken from 24 performers, 24 ‘personas’ who were cast to play both the actress and the nurse, highlighting the notions of repetition and difference, which is key to much of the artist’s work. Another video features a chain of actors who one by one, drift down to stare at the audience, seize up onstage, as Elisabeth Volger does during a performance in the movie and becomes at this very same moment horrified and mute. Each of the performers, as in a rehearsal or screen test - wearing an identical blond wig and white robe – offers a slightly different interpretation of the scene. Layered over one another, they stop short and stare, stricken, into space, near-exact copies of one another, repeated in a series, like a continuum of silver screen spirits.
The core of the exhibition,‘I should be like you’ is the only spoken piece in the show, derived from a monologue by the pair of women looking at themselves in a mirror. Ming Wong sorted a dozen performers (men and women of various ethnicities) into matched duos who performed the text in 20 different languages and accents - thus adding a layer of variation and defamiliarization to the original Swedish version.
By the impossibility to understand all the langages or ways of speaking a known or barely recognizable language, this work transcends the linguistic dissonnance and leaves all the same an uncanny feeling of closeness - the feeling of ‘watching someone else watching a film’. Actors and actresses perform continuous configurations, deconstructions and reconfigurations of the film’s most intimate moments. Furthermore, the artist layers one pair’s performance with another, by literally overlapping one projection with another, further blurring the identities of who is speaking and who is spoken to.
The video works displayed in this exhibition must be understood as a whole where what really matters for Ming Wong is the reconfiguration of the essential moments, positions and gestures of the original film - a way for him to think and explore the great vulnerability of identity, made of lost pasts, forgotten traumas, happy reveries.
Beyond the tribute to an historical film, there is in this work the renunciation of the possibility of any fusion with the other, ‘a space between the real, the perceived and the imagined’. The lines between self and other, real and onscreen space, original and copy remain unstable. Rather than emphasizing their ‘actual’ difference, however Ming Wong strives to have us recognize a world where our understanding of sameness and difference is perpetually subject to change. Like Bergman's image of Elisabeth and Alma, we are all hybrid creatures. And in Ming Wong's world of strange and shifting doubles, we can only recognize ourselves.