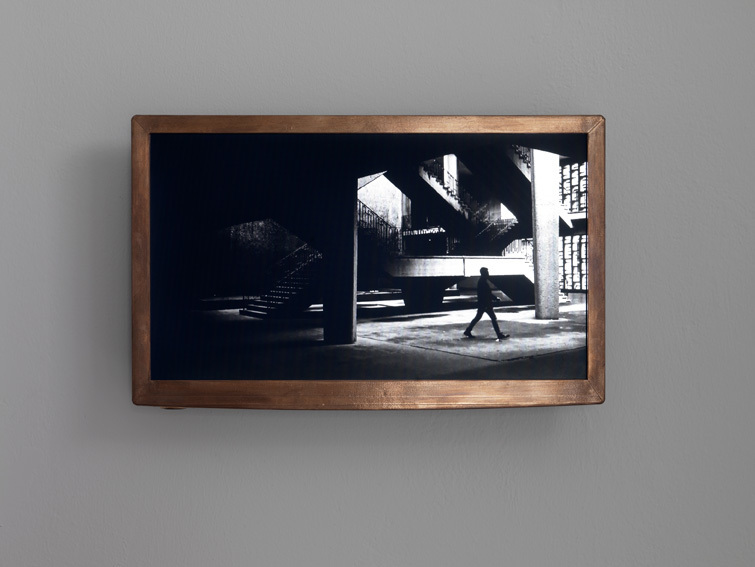 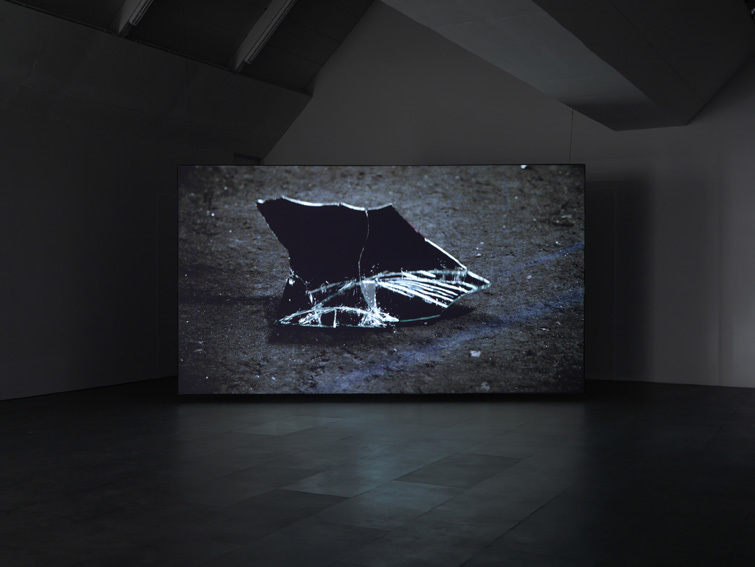 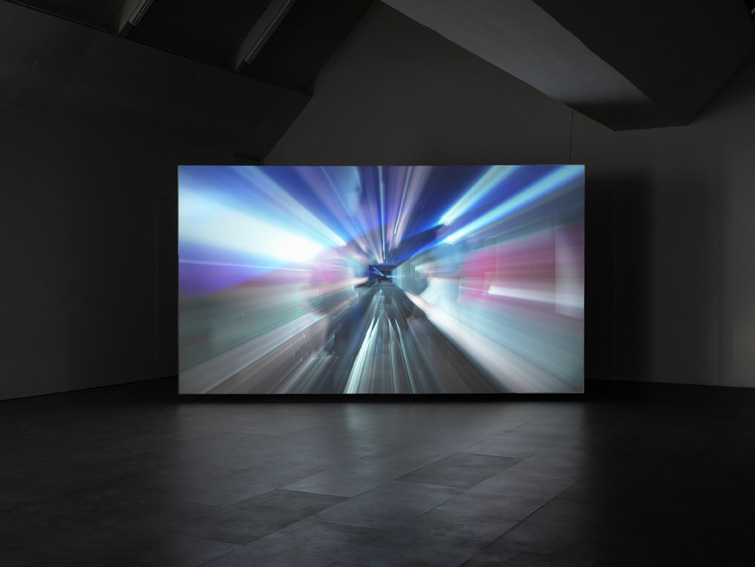 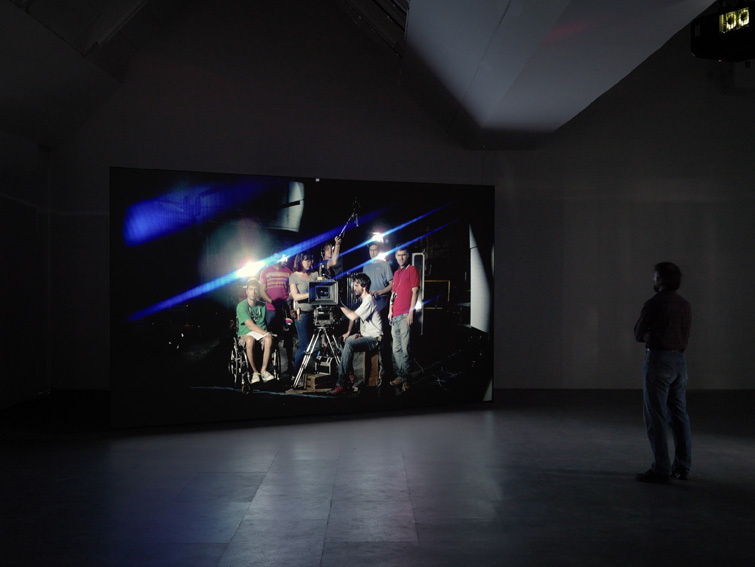 If we want to try to characterize the effect produced by Sebastian Diaz Morales’s new video works installations Insight, Pasajes and Smoke Signal which compose Ficcionario, his fifth personal extensive exhibition at carlier | gebauer in Berlin, the first words that come to mind are probably those of strangeness and unreality. Face to his videos, we feel troubled, we have the impression not to know anymore where we are, to feel crackling our certainties about the reality of the world we live in.
There is this dotted affirmation that there is no difference between reality and fiction or if we want to preserve after all an independent reality, it obeys to laws completely different from those that we used to accept, that Man lives in the unreality of fiction as well as in the reality.

With Ficcionario, Sebastian Diaz Morales keeps waving between his passion for documentary investigation and his inexhaustible interest for narrative which is both fantastical and steeped in utopian yearning. It is a constantly balancing act between the absurdity of the world, the images of the infinite territory, the despair of gesture and the search for traces illustrating this human quest of significance.

Between broken mirros, opened and closed doors, the exhibition suggests us a labyrinthine universe where life could be a dream, an universe rending indiscernible reality and fiction, destabilizing our own common sense. But above all, we realize more than ever the awareness of this artist regarding the opacity of an external reality which overflows and crashes him.

Since 1998, Sebastian Diaz Morales has been persistently working out films in the very limit-line of real and fiction, creating a sort of optional reality present in this accumulative process. With his last video installation work Insight, the artist intends to examine the reflection of a film set and a film crew given back by a mirror. When the mirror shatters, it breaks the image into various points of views, multiplying in this way the visible into infinite possibilities. The broken image of reality - the infinite repetition of its parts - destroys the appearance of a contemporary world unmasking its speech and reconstructing it into another possible reality.

The mirrors of Insight send us back to the apparent aspect of the world since they reflect a reality that is not in them but out of them; moreover, they reflect it but in reversing, twisting it. They are reflexion of consciousness and self-contemplation but can also represent doors that we find in the labyrinthine haunting, almost choreographical, Pasajes - thus constructing parallel possibilities and visions of the real.

While Insight breaks the surface of appearance and the mechanisms of creating reality, Pasajes, is already on the other side, exploring those multiple ways, reconnecting dimensions otherwise disconnected. This «existential vagabond» who keeps walking endlessly through as many doors as atmospheres, strolling along and questionning the human existence, life’s journey, its uncertain ending. We - as viewers - becoming the character and so travelling through the most unlikely places, crossing the name of Cervantes, the image of La Joconde, punctuated of myterious words such as ‘Department de Anataomia Museo’, ‘Antartida Argentina’, ‘Vas a entrar en la historia’. It is actually there where we start gathering unforeseen territories, shapes and forms, and where we will rediscover the multiple and versatile possibilities of the real.

For him, the creative process involves sketches which are often abstract in relation to the idea that will come later, scripts, short and vague annotations, elements used for the films, discarded video material, storyboards. All this left over material, part of the first steps of the conception of the works happens to go back to its first place. At the very entrance of the exhibition, the artist hangs a storyboard of the script of Insight, showing in 48 sequences the bursting of the mirror - each shot is depicted twice with a drawing to picture the exact movements of the mirror and it is only from the front that the drawings can be perceived.

In the project room, Smoke Signal intends to make a reading from a specific situation: we see cameras recording what seems to be a tense situation: a mass of people walking, marching, smoke, fire, flags.

The art of Sebastian Diaz Morales is in the same time the means to conceal and to express an existential anxiety, a way to make us feel the structural complexity of a world whose we tend too often to underestimate the strangeness and to awaken in us the astonishment about it, another way of questionning the relationship between art and life and more generally to place the human being between the real and the unreal. Gathering the ontological sense of mystery, the perfection of form and poetical beauty, Sebastian Diaz Morales’s work is unquestionably one of the most accomplished expression of the anxiety of our time.

By the end of the exhibition in Berlin, the artist will release a book, in collaboration with the publishing house Distanz, including an important selection of heterogeneous material. This narrative structure intends to expose the stages and phases of the creative process of making a film or a narrative video installation and to disclose these methods of perception and formulation of reality.

Showing in premiere at carlier | gebauer, Berlin, Insight and Pasajes will be presented later at Catherine Bastide gallery in Brussels and at the Fundacion Telefonica in Buenos Aires and from the 23th September 2012 to the 7th April 2013, Sebastian Diaz Morales will be part of the collective exhibition Open End, the fourth one in an ongoing series of presentations of film and video works from the Goetz Collection in Haus der Kunst in Munich.
Insight was supported by the Fonds voor Beeldende Kunsten, The Netherlands and received the grand prize at the Fundacion Telefonica, Buenos Aires.