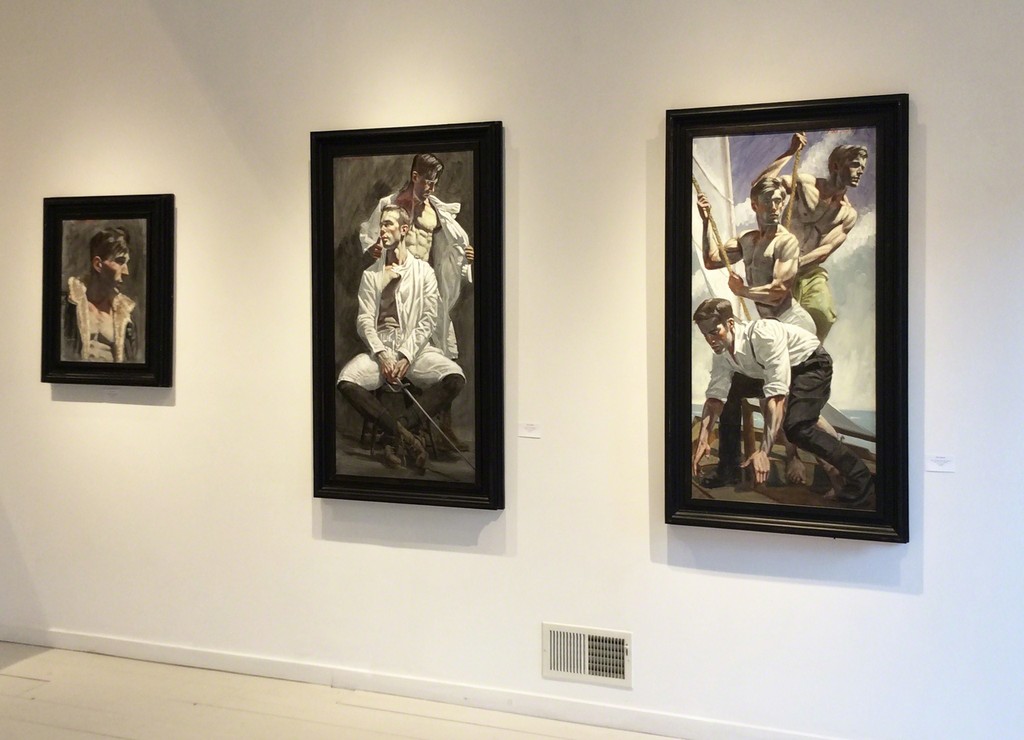 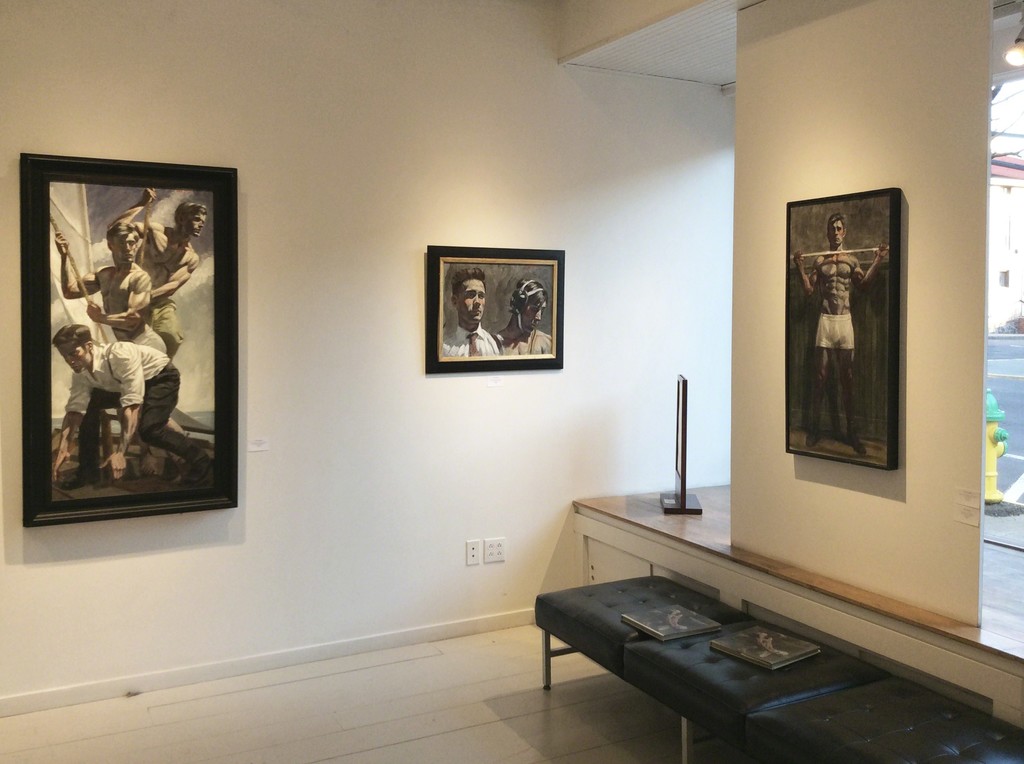 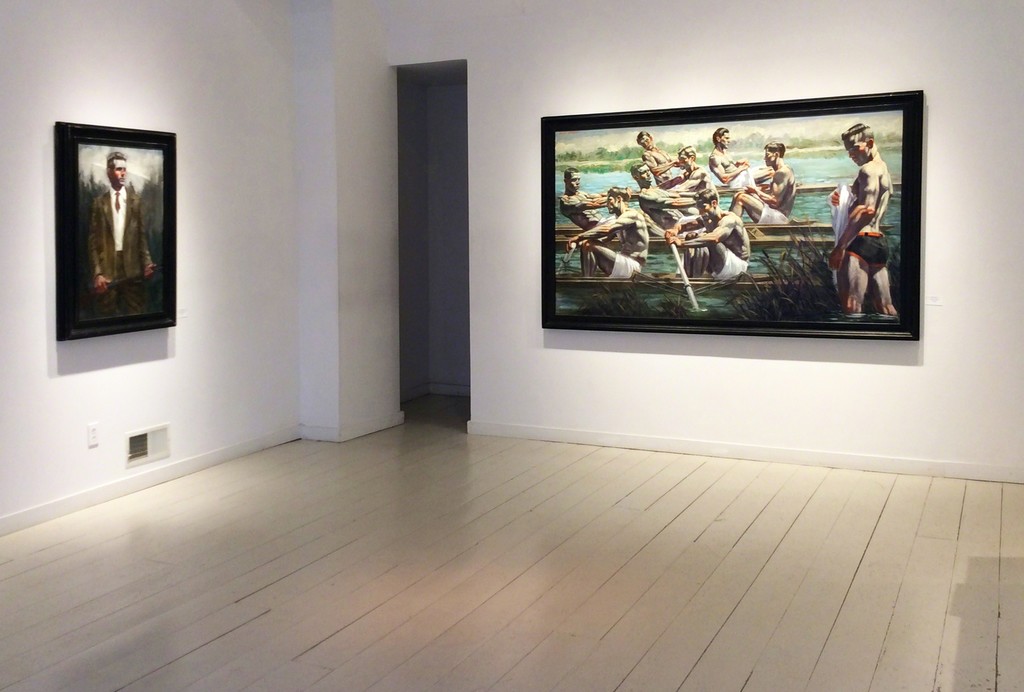 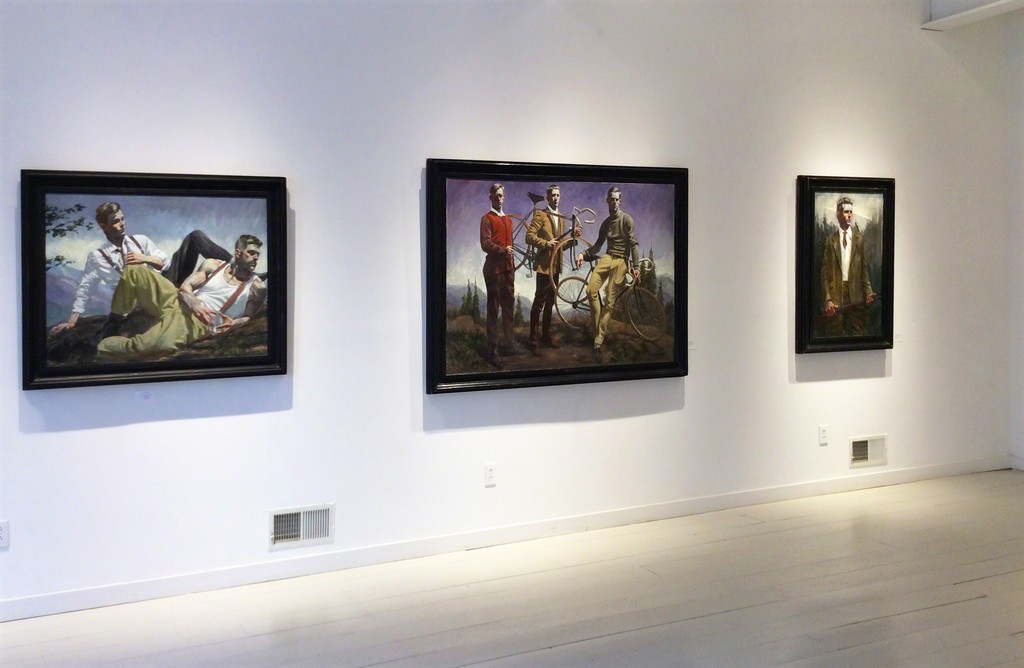 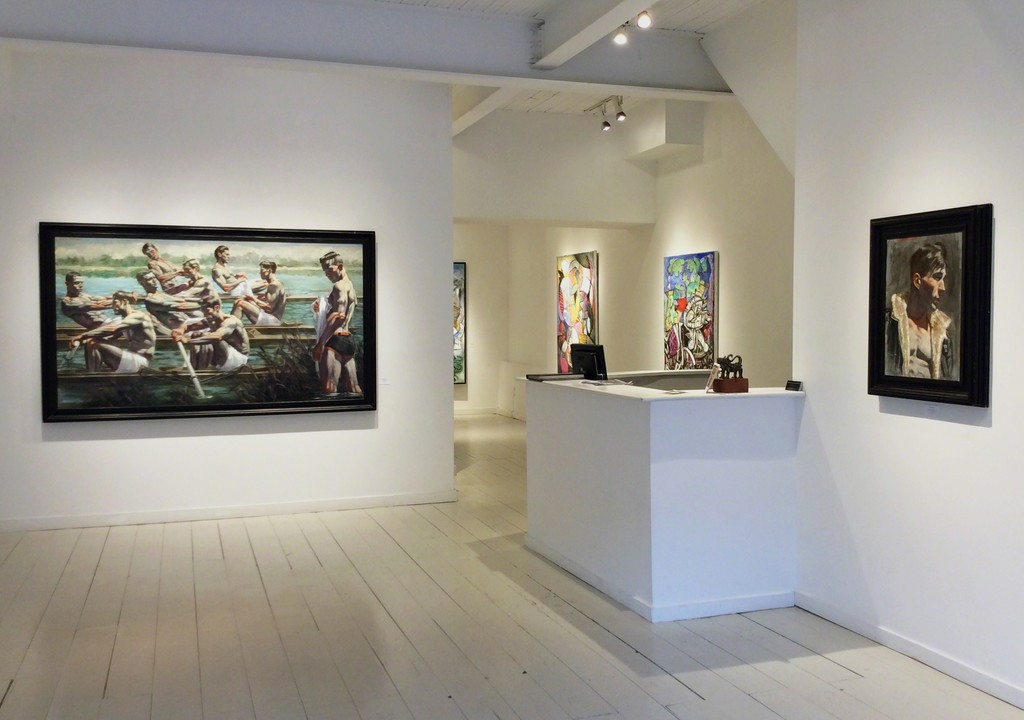 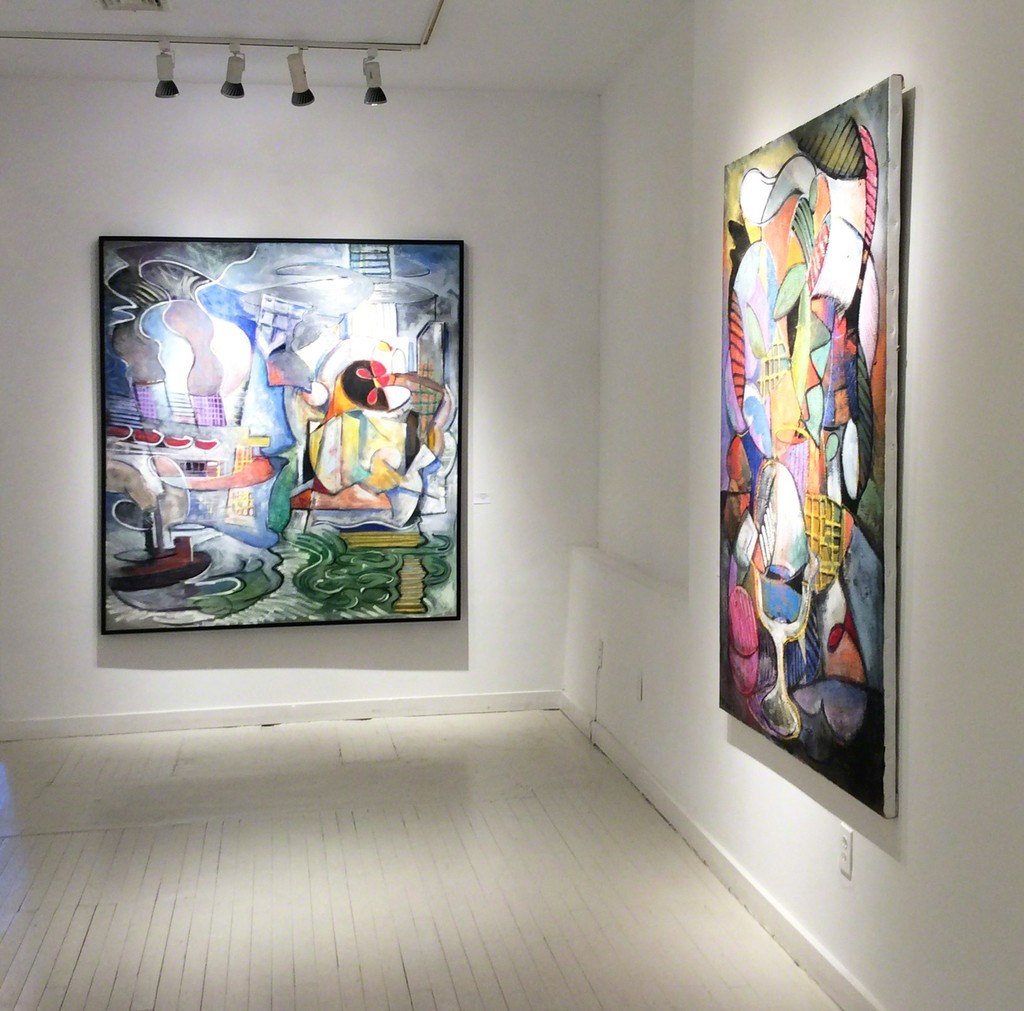 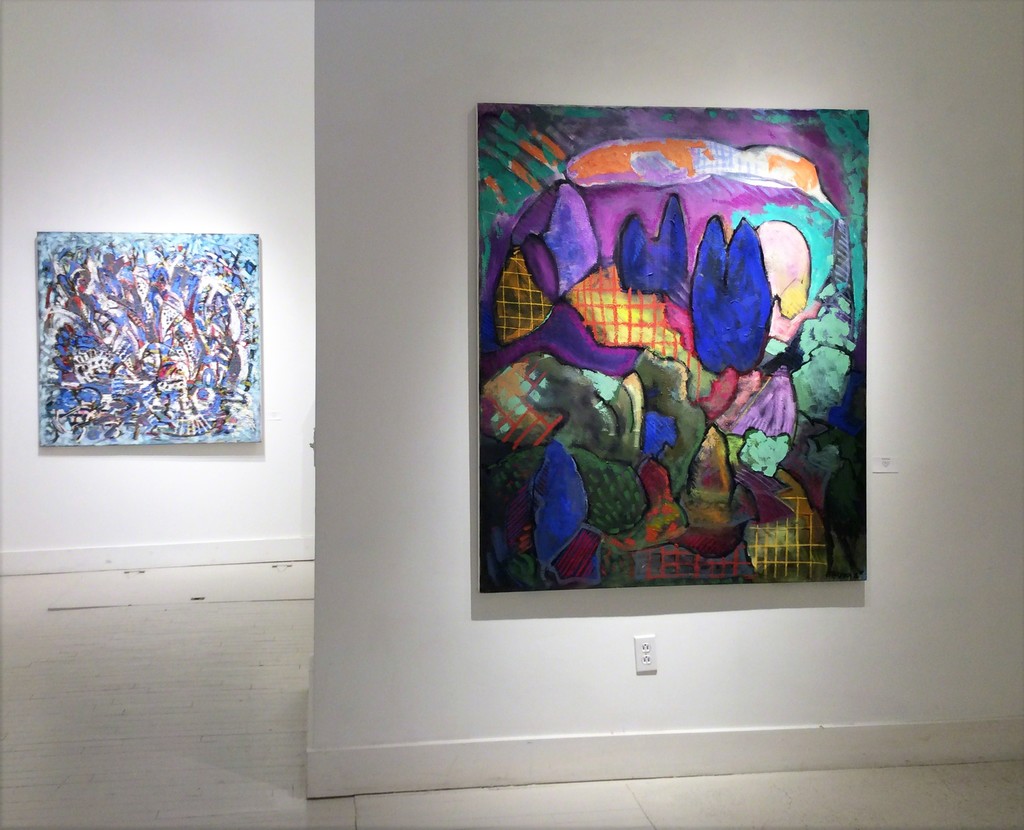 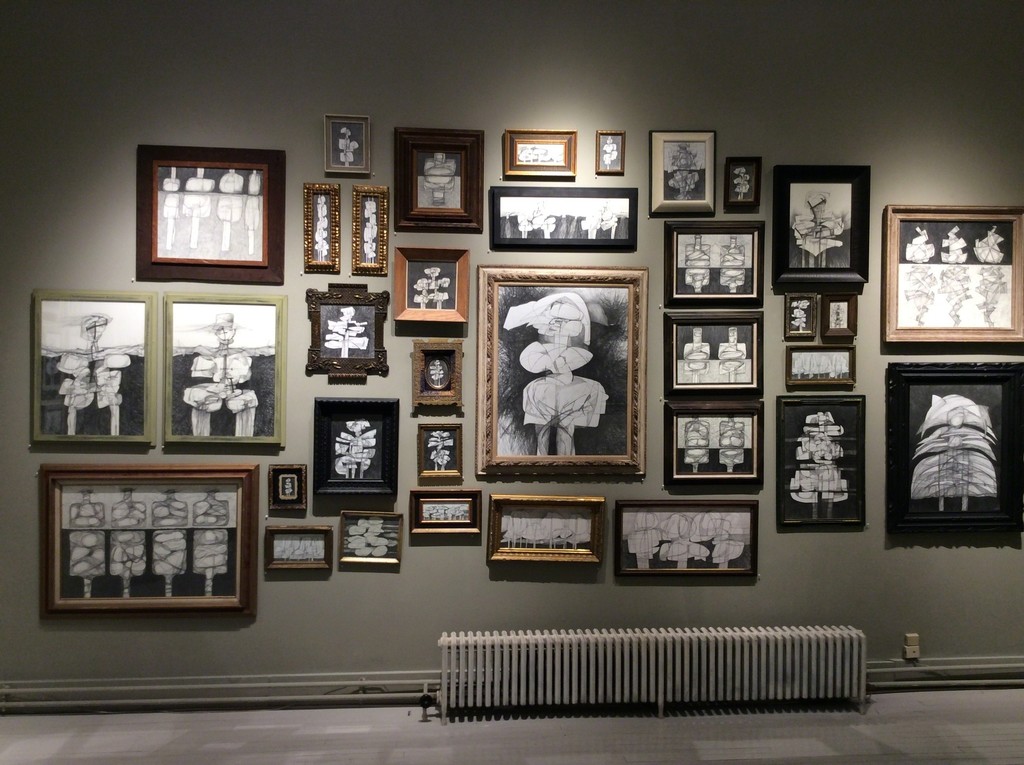 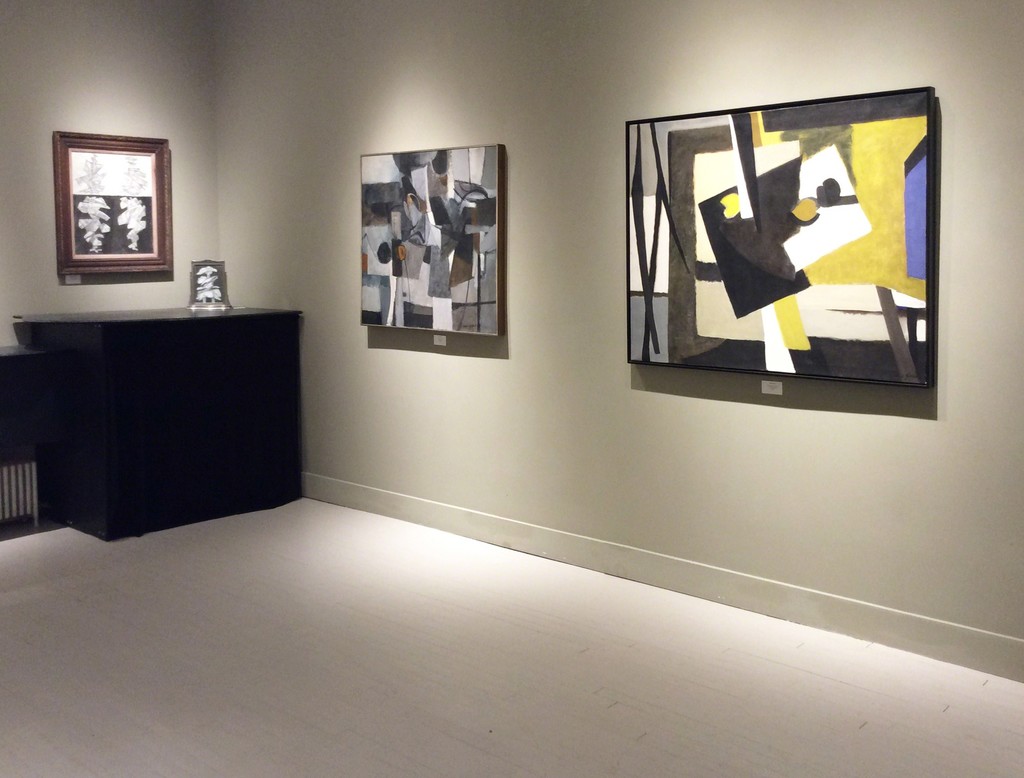 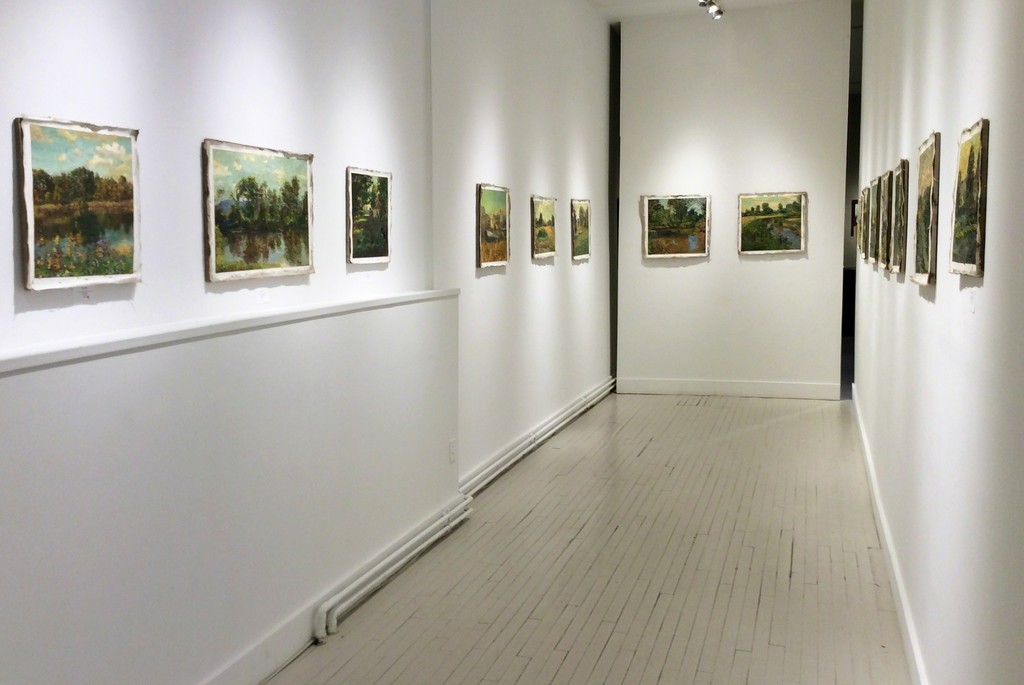 Mark Beard is perhaps the most literal example of an artist pulled in so many different directions that he chose to “invent” six different personae in which to channel his overflowing energy and need for expression. Each painting style is radically different from the next, so it remains entirely believable that the work could stem from six completely different people of different time periods and different schools of thought. With a background in set design, Beard has always been one who could conjure total magic with anything available. For this exhibit, he returns as the beloved 20th century painter from England, Bruce Sargeant, featuring a parade of Arcadian scenes suggesting afternoons of young men sporting in the countryside, rowing, bicycling, hunting or wrestling. Clean shaven, well manicured youths pose casually, indulging every opportunity to display a titillating flex of stone-like musculature. Like modern Greek statues, Beard paints these prestigious figures oftentimes in pairs of twos and threes in a lazy state of beautiful passivity. Mark Beard keeps himself fresh with challenge, undertaking ambitious commissions and committing to weekly sketch sessions with live models in his Manhattan studio. The result of this dedicated practice is a stunning array of graphite and conte crayon drawings on Arches paper. Mark Beard has exhibited with Carrie Haddad Gallery for nearly twenty years and there has never been a dull moment. His work is featured in many significant collections including the Metropolitan Museum of Art and Boston's Museum of Fine Arts. We would not be the least bit surprised to see new ‘personas’ emerge in the coming years.

When he’s not designing for stained glass or city parks, David Dew Bruner unleashes yet another facet of his talents via graphite drawings. A wealth of knowledge, both studied and intuitive, Bruner finds inspiration in many of his artistic predecessors. In his process he retains a resonating detail from a particular series of work and then reinterprets and reassembles the influence into his own drawing experience. Oftentimes, drawings are the accumulation of up to four pre-existing images, as an ode to Rauschenberg's erased deKooning piece, drawn and erased any number of times until the pinnacle of Bruner's vision is achieved. Bruner has the eye of a hawk, and his years spent in dealing antiques means he knows a treasure when he finds one. Therefore, his studio, once an old train depot in Valatie, NY, has been tastefully converted to not only house his personal collection of art and mid century modern fixtures, but also to store a stockpile of vintage and modern frames. As he zealously produces one inspired work on paper after the next, he predestines a frame for each drawing before it is completed. For this exhibit, the artist presents two new series inspired by Morandi's bottle still lifes and Francis Bacon's portraits. The likeness of each artist's subject is expressed on paper, re-envisioned through Bruner's characteristic style of excitedly applied graphite that produce shard-like fragments embedded with deep interwoven marks. David Dew Bruner will also feature work inspired by Richard Lindner’s figures and Velasquez's Infanta Margarita.

Lionel Gilbert experienced a long and commendable career as an artist, a teacher and an illustrator. He succeeded in all aspects of his career because he found ways to remain versatile and adapt to a changing world so he could continue to produce his art. Gilbert became enthralled with art at an early age and began his artistic training early in New Jersey at the Newark School of Fine & Industrial Art in 1924. Upon graduating, the young artist moved to France to further his studies before returning to the states at the dawn of WWII where he began teaching as part of Chicago's W.P.A program and created large murals in public buildings across the country. He later worked as an illustrator for mainstream magazines depicting the quintessential American household until the war when he served as an on-site Air Force artist in England depicting various aspects of military life. In 1965 Gilbert traded traditional American illustration for abstract painting and enjoyed a full time career as an artist, exhibiting in New York City’s galleries. Selections from this body of work are to be exhibited, which highlight Gilbert's unique studies of still lifes from the cubist perspective. Gilbert also enjoyed teaching at the 92nd Street Y Art Center in Manhattan for nearly forty years. Carrie Haddad Gallery currently represents the Gilbert Estate.

Joseph Maresca is an artist whose brilliance is informed by a broad context of art history. It is no wonder that he is often hired to replicate paintings by the great Masters for collectors who are too prudent to hang their original on the wall. Joseph Maresca is a virtuoso of this generation, demonstrating an unrestrained approach to experimentation when it comes to his own art. In his newest body of work, the artist reinvents his style once again and explores the deconstructions of his subject, merging the representational with the abstract in a fragmentation of color, shape, and line. Maresca's newest work divides planes created with a vivid palette of oil paint and embody the play on perspective cubists held dear. For this exhibit of larger sized canvases, the artist breaks away from their geometric mold, favoring amorphic designs made with organic lines that are interconnected with a playful use of crosshatching. The artist received his MFA from New York University and has been showing with Carrie Haddad for at least a decade. He currently lives and works in Rhinecliff, NY.

There is perhaps none other who stands in comparison to Harry Orlyk when it comes to documenting the affects of light on a common rural place, expressing the highest regard for our natural landscape. The epitome of the modern day en plein air painter, Orlyk travels the countryside around his home in Salem, NY with supplies in his van. He records nature and the vibrancy of light with impressionistic strokes of thick oil paint on fine linen. As titles like House Left by the Disenchanted Farmer and Stalling the Final Harvest suggest, the artist has a genuine connection that goes beyond mere observation. With work that spans over four decades, chronicling changing seasons and weather patterns, snow fall and rotating crops, through the filter of his own emotional temperament, Orlyk illustrates the human relationship with a cyclic world. Color and light play key roles in Orlyk's technique. "Each day is a model who will not return tomorrow" says Orlyk. "Skies are as different from day to day as people's faces. As they pass, I see them as individuals." The painter credits well-known Nebraska artist Keith Jachobshagen with having impressed on him the importance of routine, hence his discipline of daily painting. Orlyk is a recipient of the highly regarded Guggenheim Fellowship and has exhibited with this gallery since 2001.