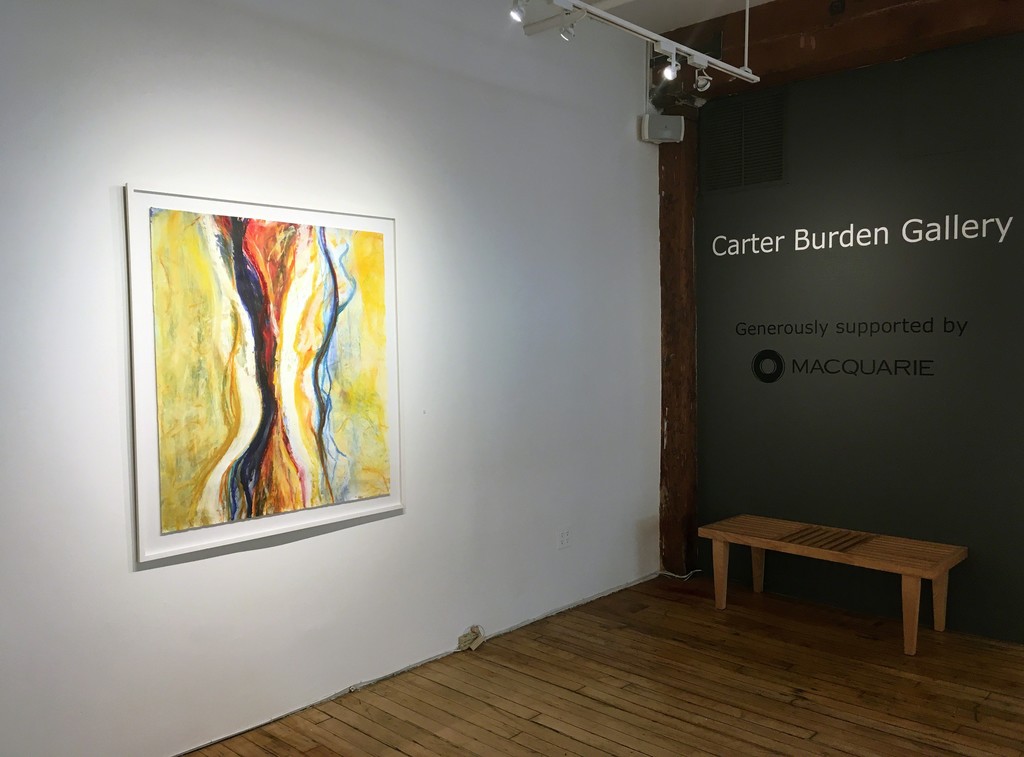 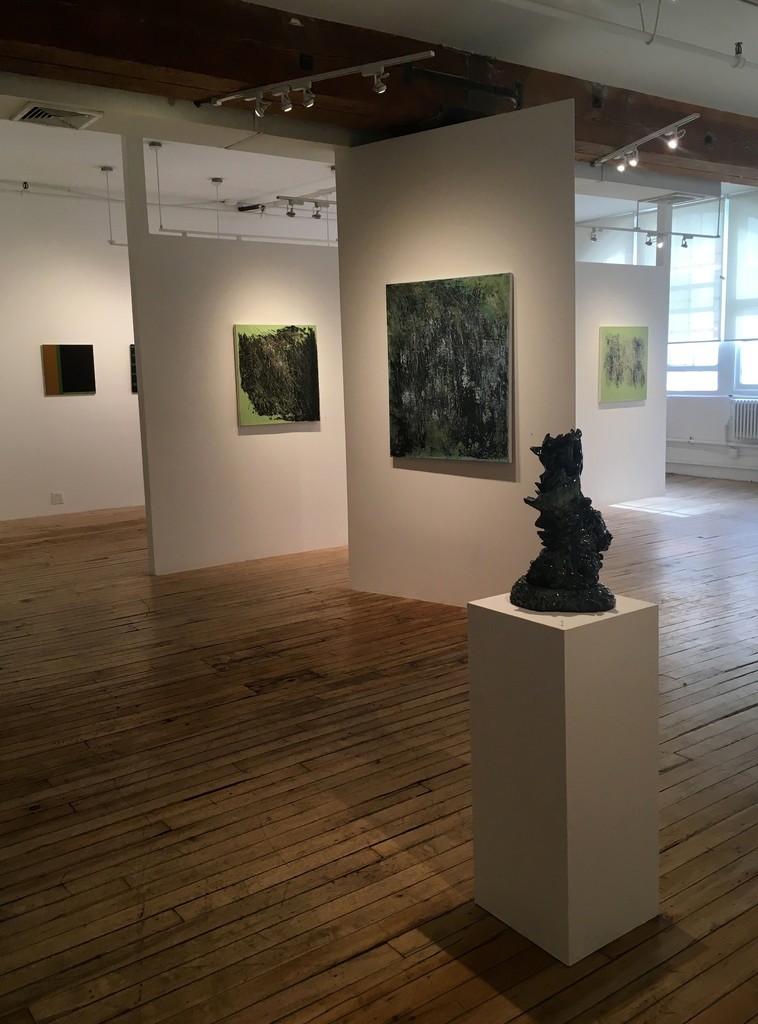 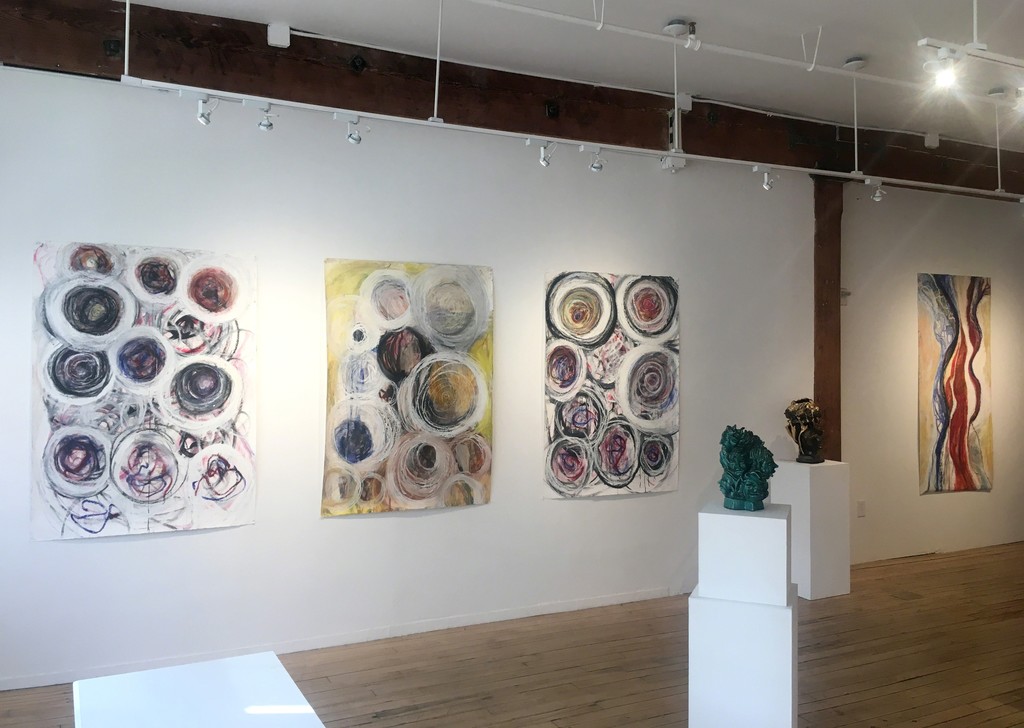 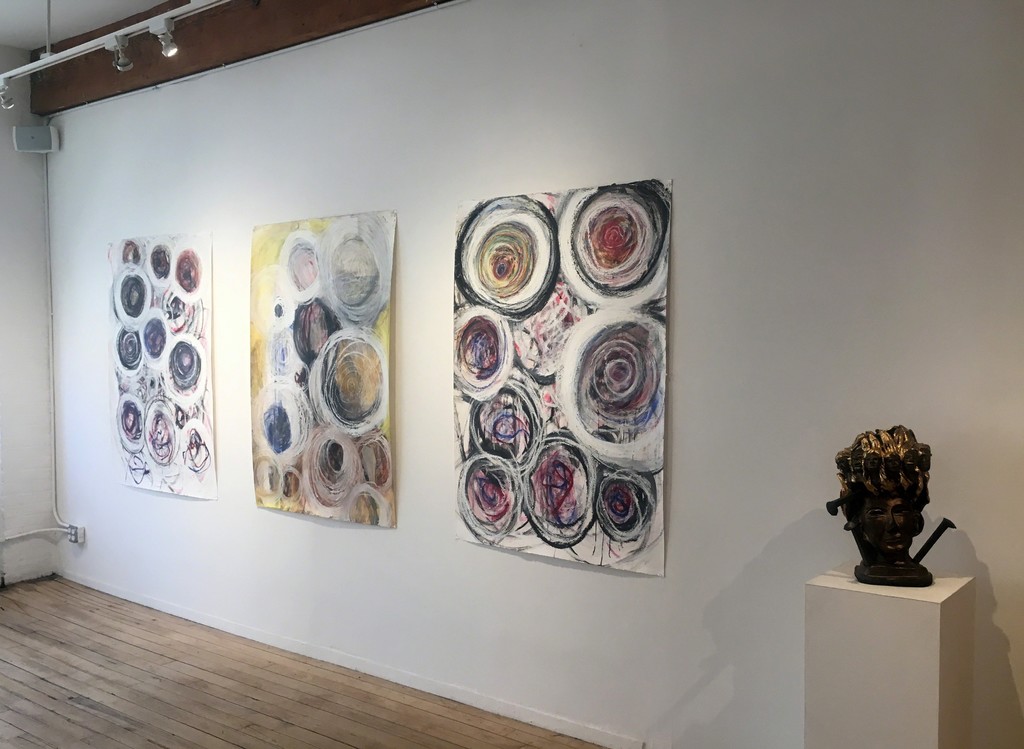 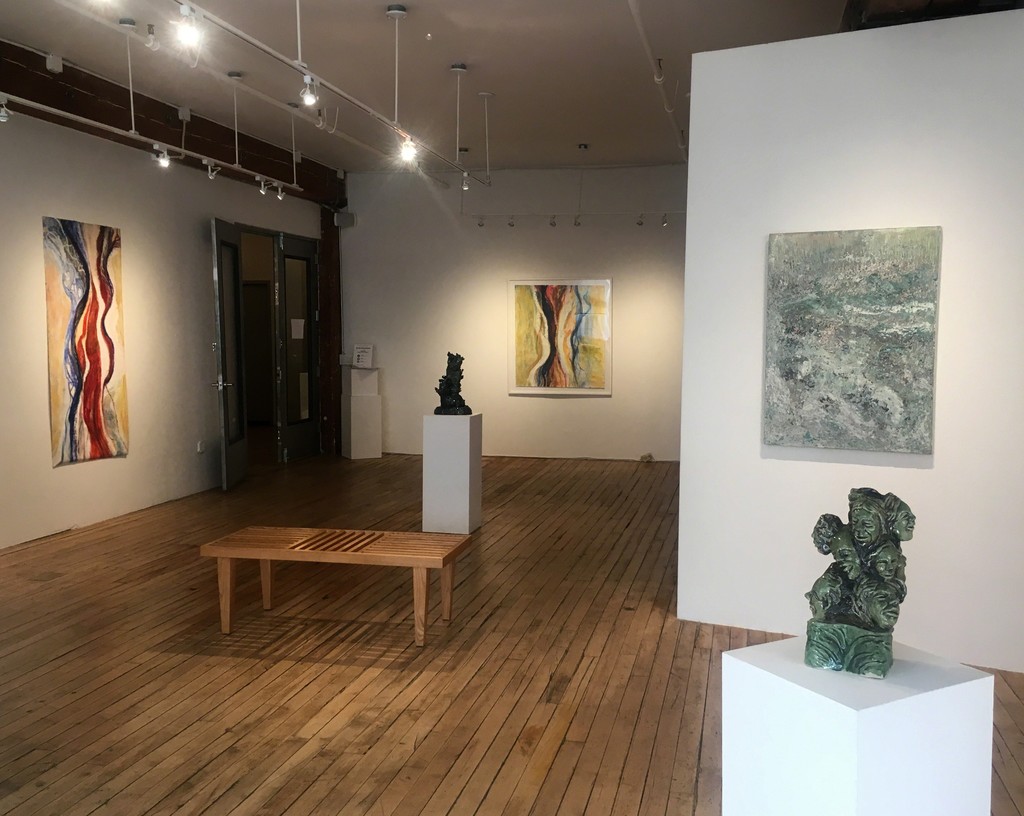 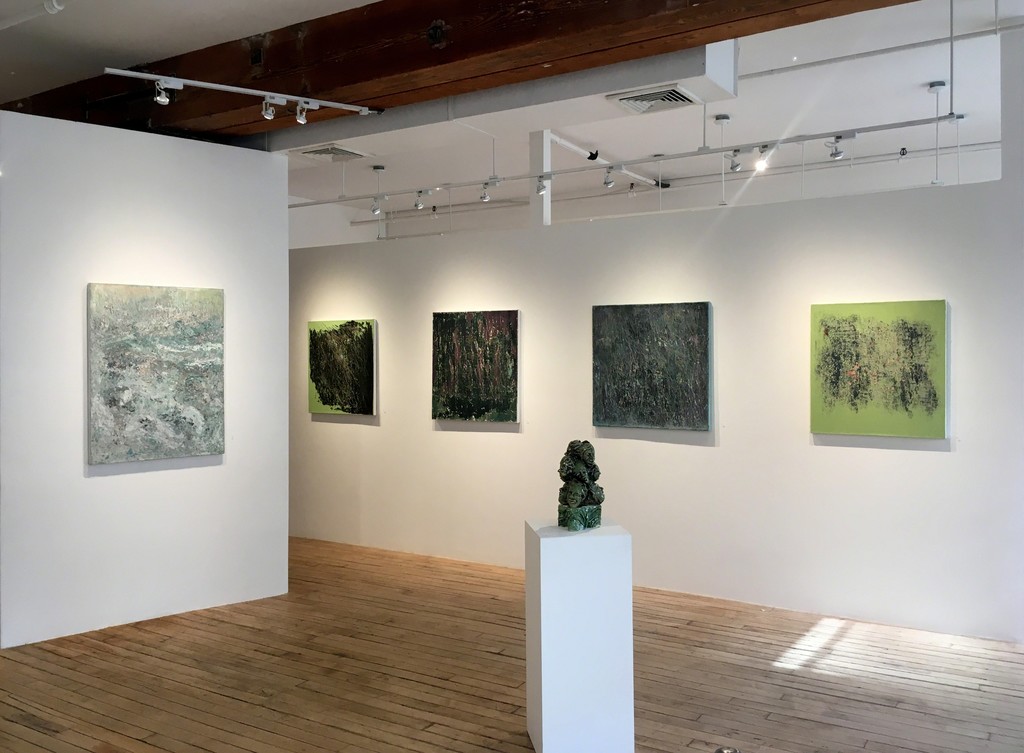 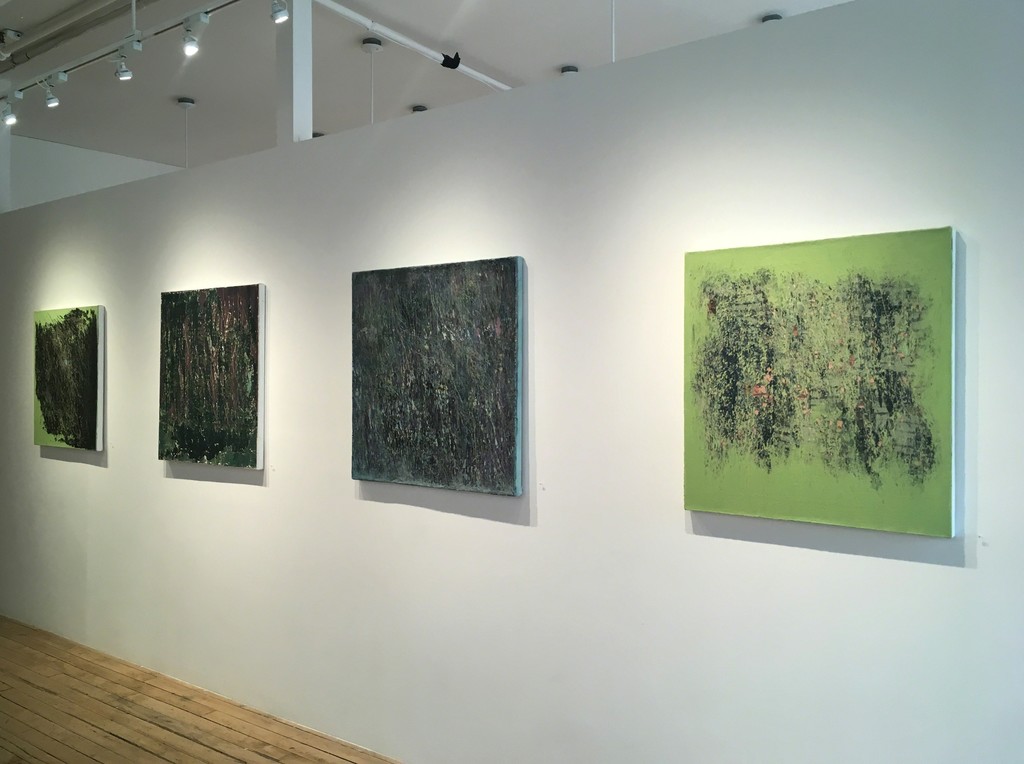 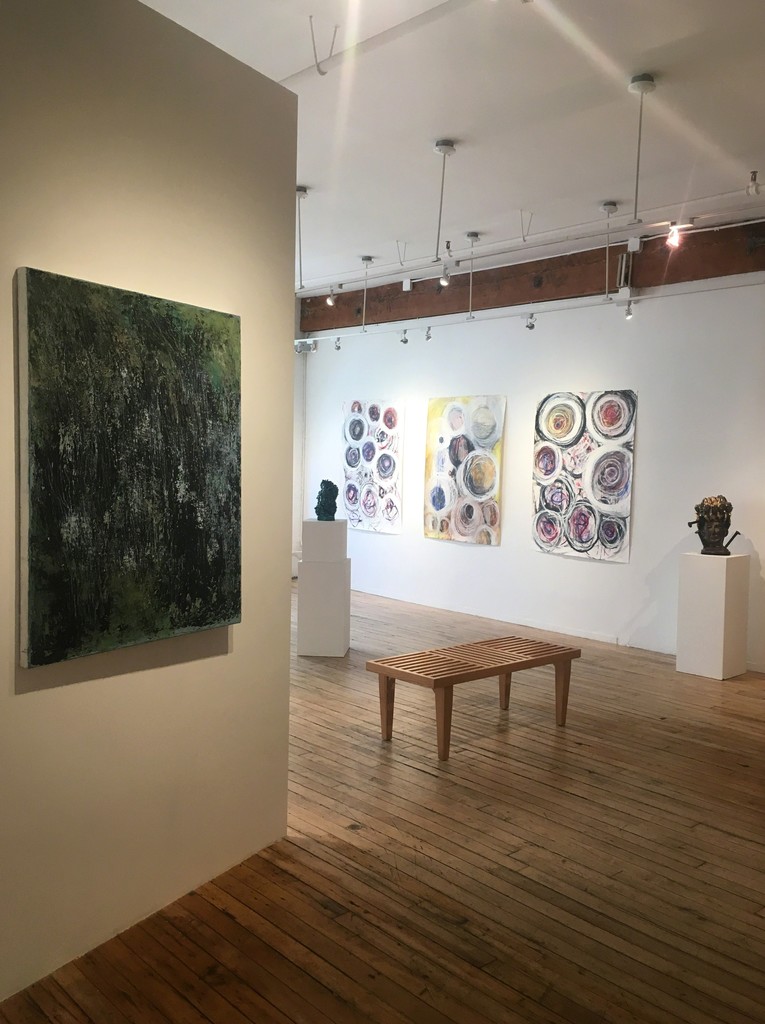 Olivia Beens
In Changing Patterns, Olivia Beens presents ceramic sculptures that explore issues of identity, feminism, and spirituality. The gilded and brightly glazed faces she sculpts in the clay provoke a sense of ritual and ceremony. Beens states, “The pieces create visual anomalies that question or confuse fundamental ideas of perspective and perception... but most importantly they suggest ‘transcendence’”. Without a preconceived notion as to what the sculpture will turn into, Beens’ works are process driven, often influenced by her everyday experiences. She reflects, “The spirit moves me but the world informs me.”

Olivia Beens was born in the Netherlands of Czech and Dutch parents and lived in Portugal until age 7. After receiving a BFA from Pratt Institute and an MFA from Hunter College she moved to the Lower East Side of Manhattan where she lives and works. During the 1980’s she exhibited installation and performance work in many alternative art galleries including Franklin Furnace, ABC No Rio, PS 122 and was a member of artists groups such as Colab, PADD, and other political art groups. She has received many grants, awards, and fellowships including a NYSCA grant, fellowship to Mac Dowell, and traveled abroad with a Fullbright-Hayes award. Currently, she is Artist In Residence at the Carter Burden Leonard Covello Senior Center.

Claire Boren
In Changing Patterns, Claire Boren presents recent abstract mixed media works in her third exhibition at Carter Burden Gallery. The inspiration for Boren’s works often stem from her personal history and memories of her childhood during World War II and the Holocaust. These experiences paired with disturbing current events inform Boren’s gestural works in Changing Patterns. She states, “In contrast to much of my earlier work, many pieces in this show express the urgency, the immediacy of our present time.”

Claire Boren began working with abstraction in 1995 after many years of creating realistic and figurative work. During this period in her life, her world had become contracted and isolated. Making the shift to abstract work in mixed media allowed her to translate her interior world into the exterior one through her art. Her work explores abstract forms in large paintings on paper and canvas, utilizing layered applications that both obscure and transform the underpainting, creating fields of tension. She paints in an initially explosive, spontaneous manner, later developing the work more deliberately. Boren has shown in New York and New Jersey in both solo and group shows.

Sylvia Harnick
In Changing Patterns, Sylvia Harnick presents atmospheric abstracted paintings from her series Under the Sea. Inspired by a dream, Harnick explores time, place, and memory by applying layers of paint and meditatively scraping away at the canvas’ surface. The works present dynamic textures and an eloquent use of color. Harnick feels that when she enters her studio a sense of calmness followed by anticipation comes over her. “I sit on my step stool chair, allow time to pass, observe my work, make mental notes, feel a stirring, usually proceed to mix a new color or if a canvas is raw, start that first coat of gesso. I allow my painting to take me along, follow the path in which it leads me. I am there with my memories, experiences, to inform me. I am there whole in the moment.”

Sylvia Harnick, born in New York City, is an artist and poet. She taught for four years before she discovered her “true vocation.” She earned a BA from Brooklyn College and studied at the New School, the Brooklyn Museum, Nassau County Museum of Art, and the C.W. Post campus of Long Island University with Robert Yasuda. Harnick’s work has been shown in numerous group and solo exhibitions at galleries in New York, California, Texas, New Mexico, and Oregon, among others. Her work is also in many public and private collections including Citibank, Islip Museum, Fine Arts Museum of Long Island, and Queensborough Community College. Harnick’s poetry has been published in “Toward Forgiveness,” an anthology of Poems (2010), PPA Literary Review (2009, 2010, 2011), and local publications.