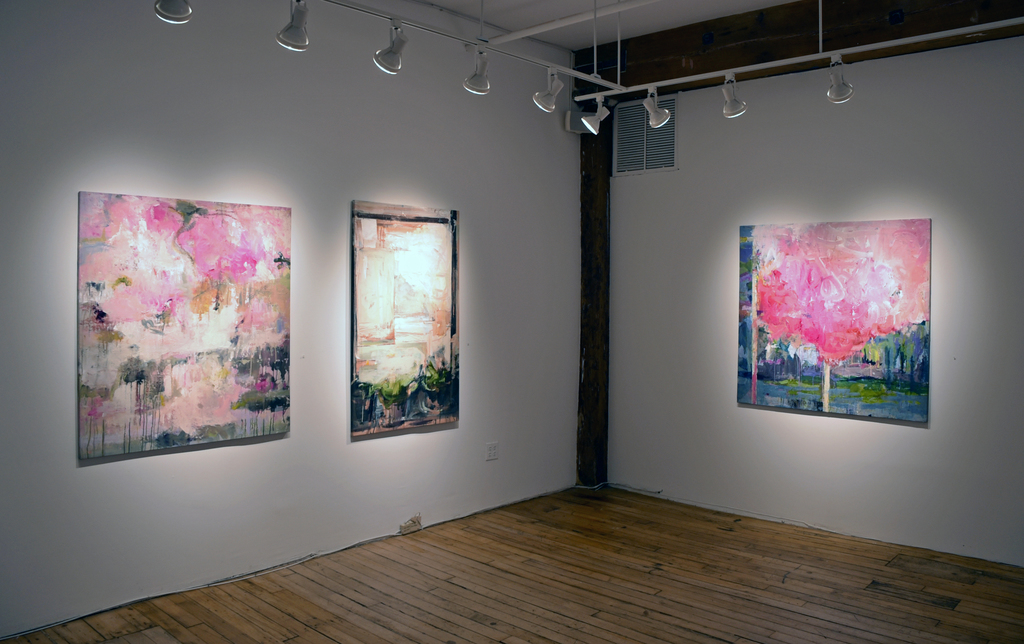 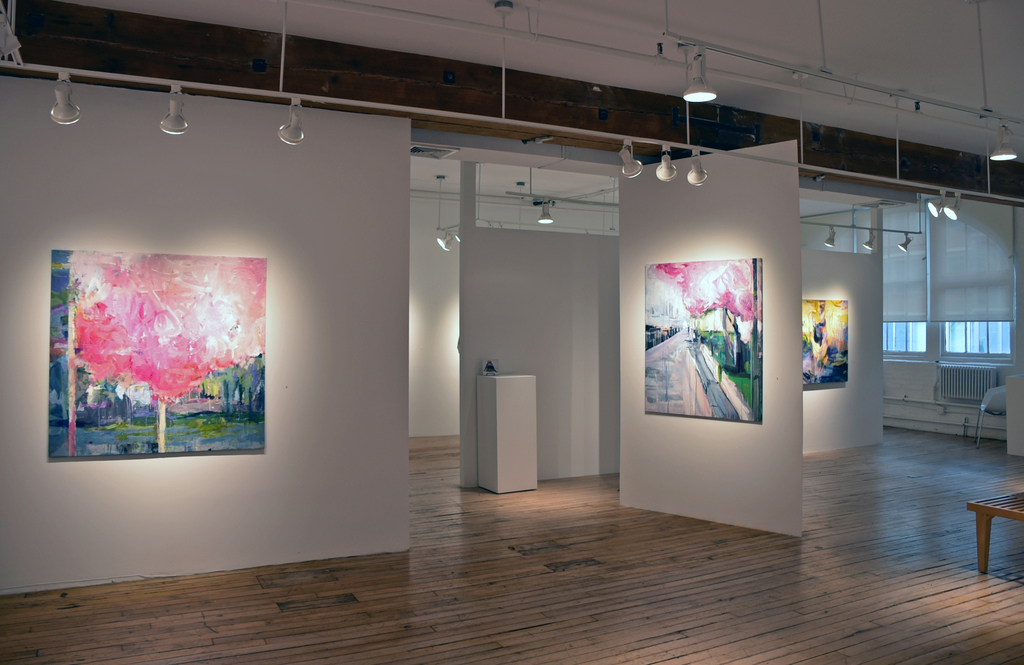 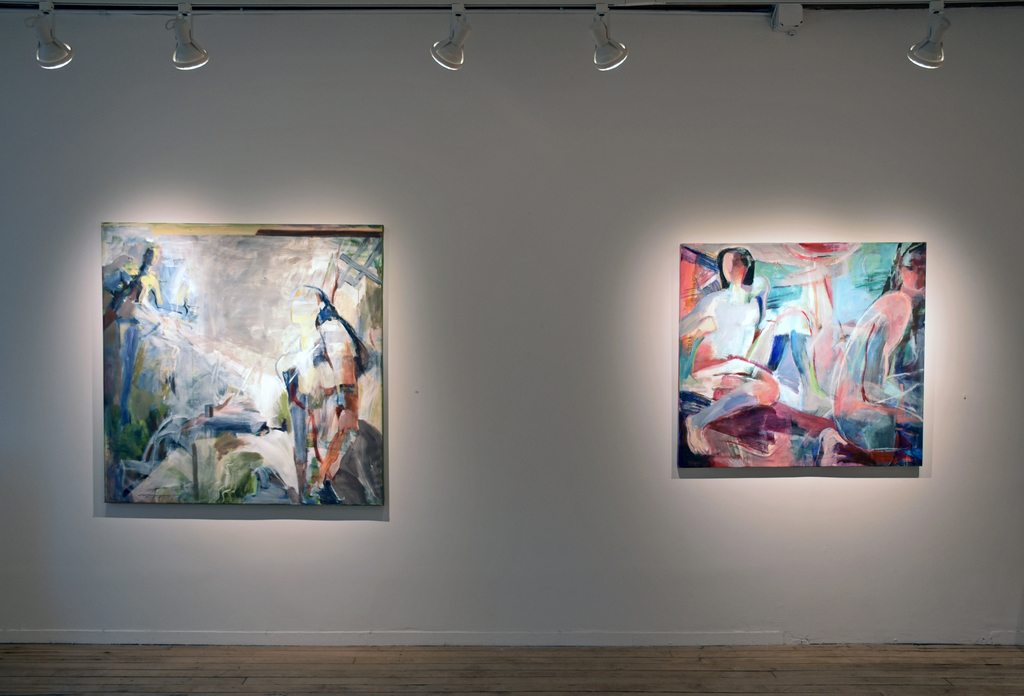 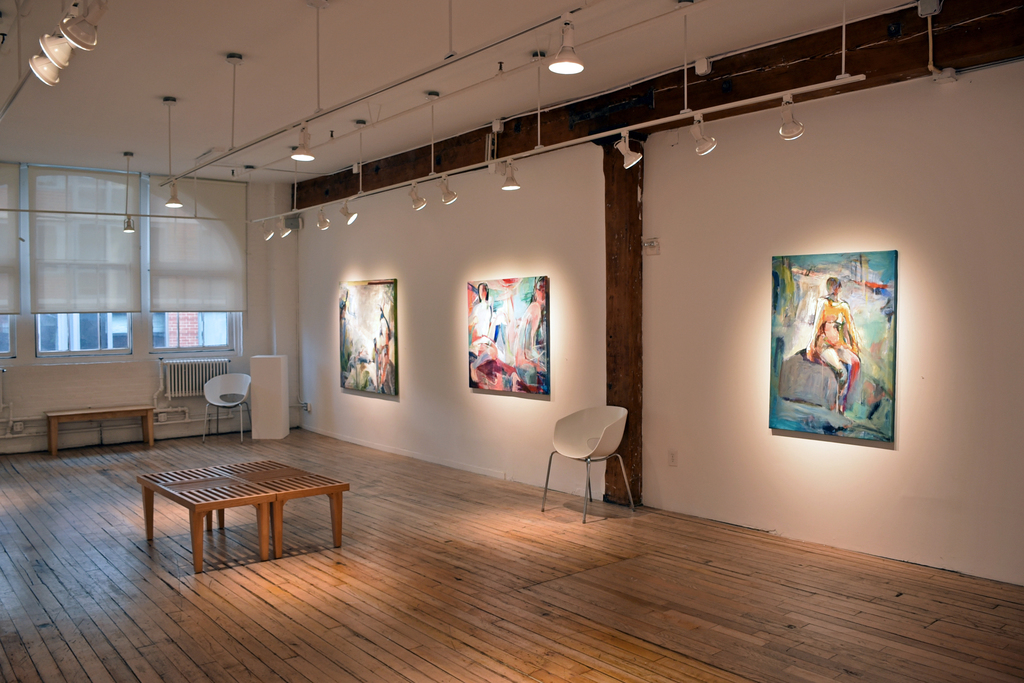 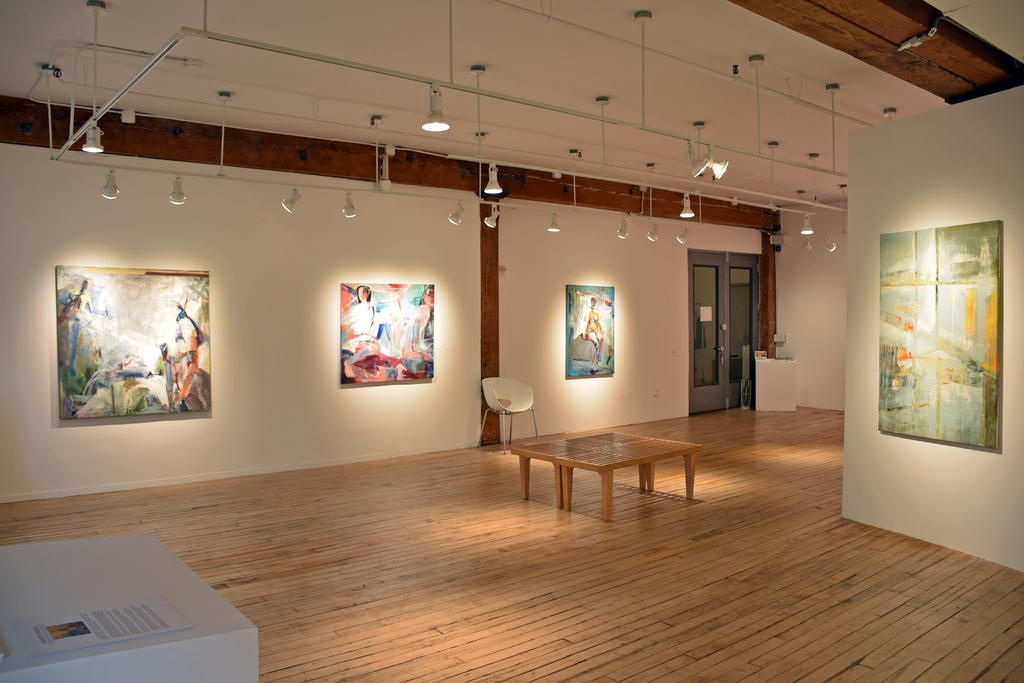 Marilyn Church presents large acrylic paintings of abstracted figures in Reconfigured.
Although she occasionally strays into what seems like total abstraction, the figure has been
a continuous theme throughout her career. The impact of the stories of victims and those
charged, first fascinated her as a court room artist. A sense of intense emotion resonates in
her works. Now, freed from any prescribed boundaries of subject matter, her work is based
on improvisation, dream images and, intuition. Church explains, “In this process of
discovery, a narrative eventually emerges however illusive it appears. It is often cloaked in
mystery, eroticism, and ambiguity.”

Marilyn Church, born 1940 in New York City, is a painter. Church has taught at Pratt
Institute and FIT and has been a courtroom artist for the New York Times and television.
She has a BFA from Pratt Institute and has done MFA work at Indiana University and Pratt
Institute. She has also studied at Visual Arts and the Art Students League. Church’s
drawings have been collected by both the Smithsonian Institute and the Library of
Congress, which has 4,500 of her pieces in their archives. She has shown extensively in
New York City and on the East End of Long Island. Some of her solo shows include The
Julian Beck Gallery in Bridgehampton, NY; The Bernaducci Meisel Gallery 57th Street, NYC;
and the Roger Smith Gallery, NYC. Noteworthy group exhibits include: Carter Burden
Gallery, Uprise Gallery, The Brucennial, and Peter Marcelle Gallery. Guild Hall Museum
awarded her Best Mixed Media Artist in 2008. She has received a NY Press Art Award and a
TV Emmy. A book of her work, The Art of Justice was published by Quirk Books in 2006.
Most recently Church was interviewed on One Night in Central Park, which aired on ABC’s
2020 in May last year.

Basia Goldsmith presents energetic, vibrant abstracted paintings in Reconfigured. For
some time one of the recurrent subjects of Goldsmith’s paintings has been the cityscape
viewed from her apartment. It encompasses Riverside Park, the West Side Highway, the
Hudson River and, sometimes, the New Jersey and New York skylines. Her pieces
transform with the different colors of the seasons, time of day, and even the scaffolding in
front of the window to create a dynamic new story. Goldsmith’s paintings are embedded
with photos and articles that are paired with painterly brushwork, creating a sense of
dimensionality. Goldsmith states, “When I start to paint, I find myself in a constant struggle
between my desire to have a conscious objective and the strong impulses from within,
where I find myself painting in a subconscious state.”

Basia Goldsmith was born in Pozan, Poland. As a child, she was sent to an internment
camp in North Africa, along with her mother and siblings. She was relocated to Scotland
where she grew up on a farm. She attended London’s Central School of Art, and after
graduation, she became a textile designer in Paris. She moved to New York in her 20s
andhas since devoted her time exclusively to painting. Goldsmith has exhibited extensively
across the United States, including at the Polish Consulate in New York. Her selected
commissions include The Chrysler Building, Metropolitan Life Insurance, among many
others.