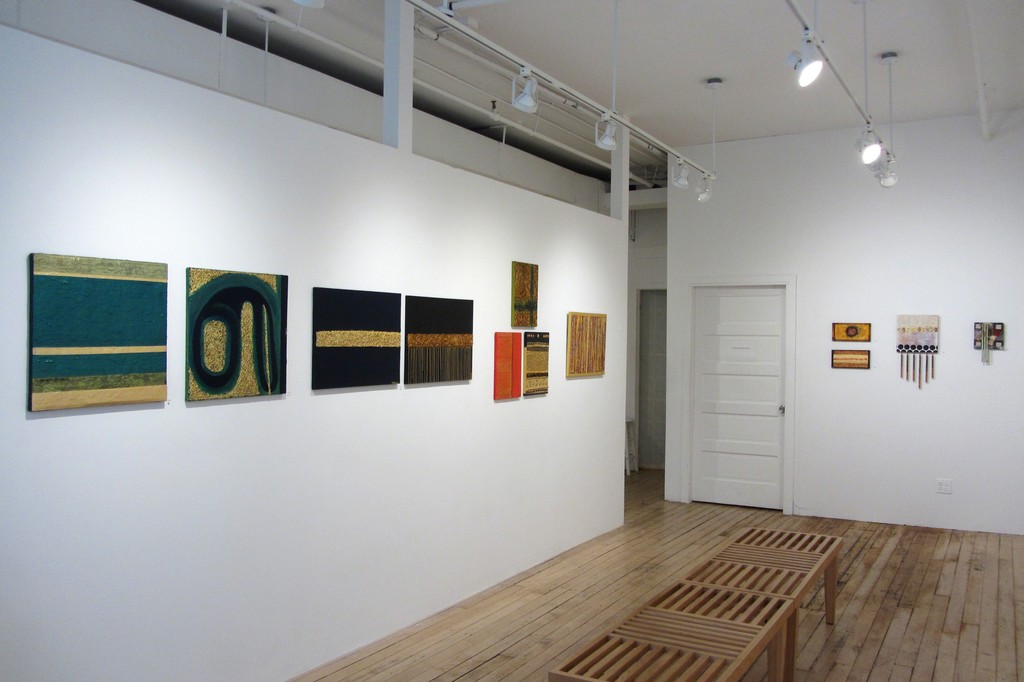 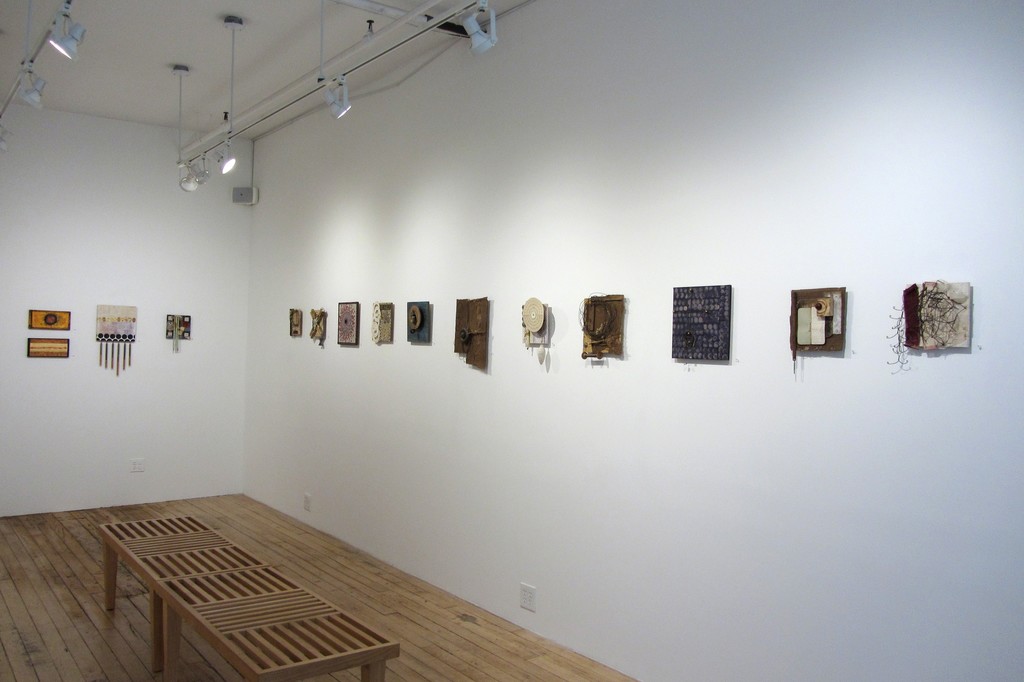 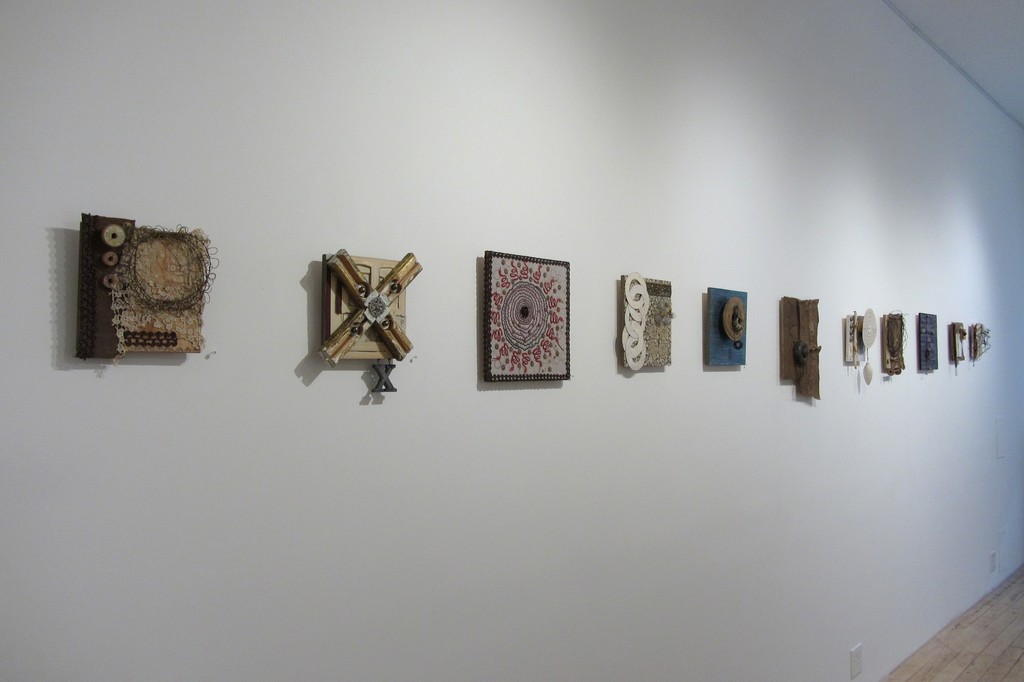 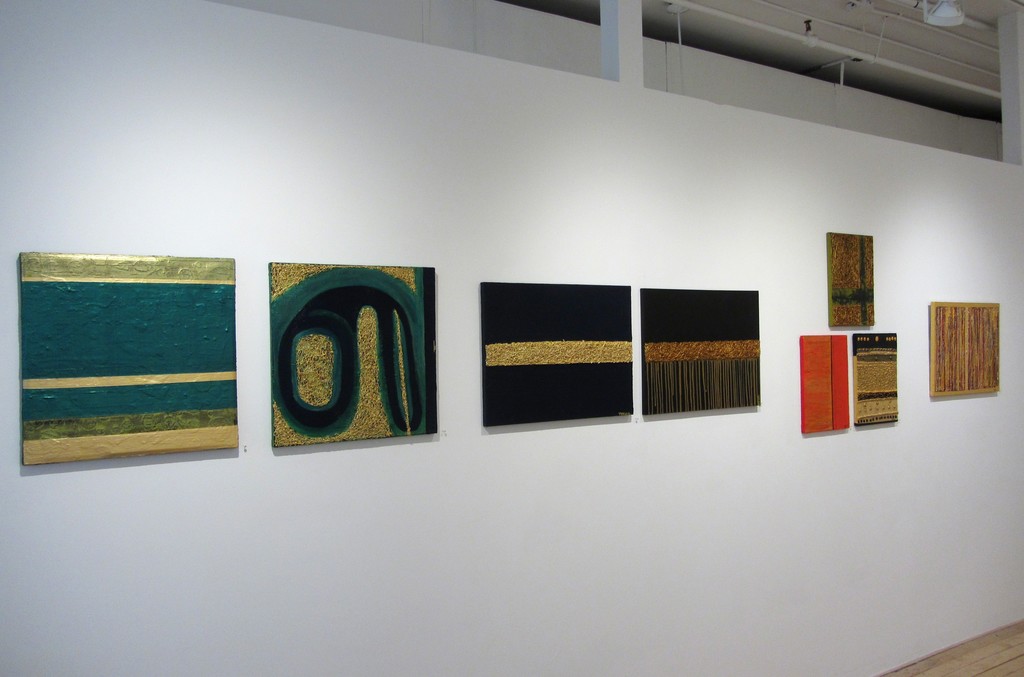 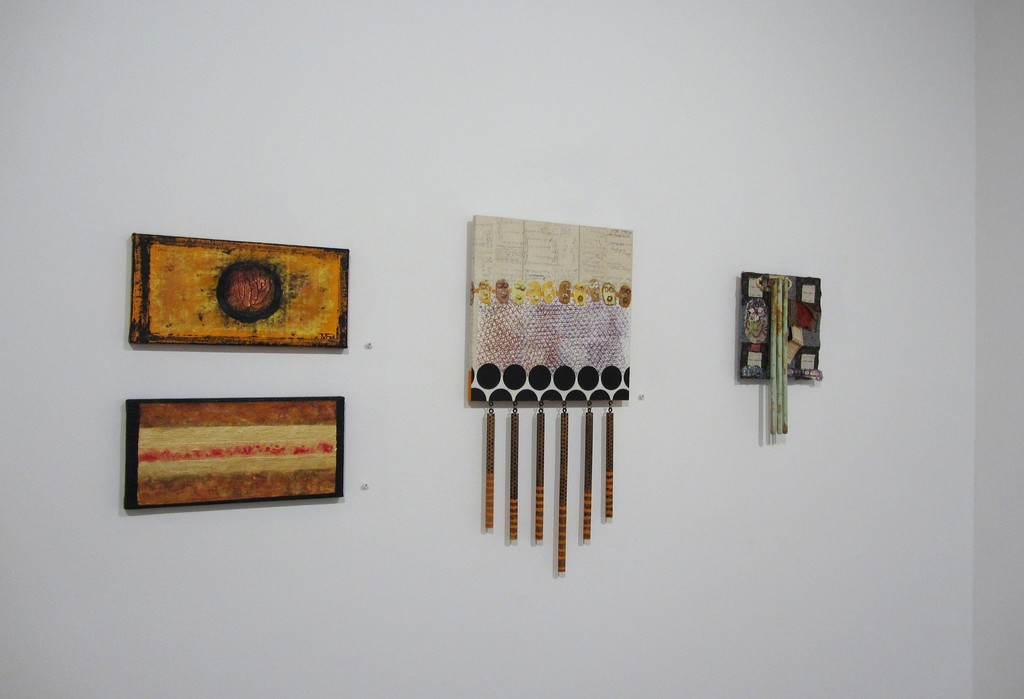 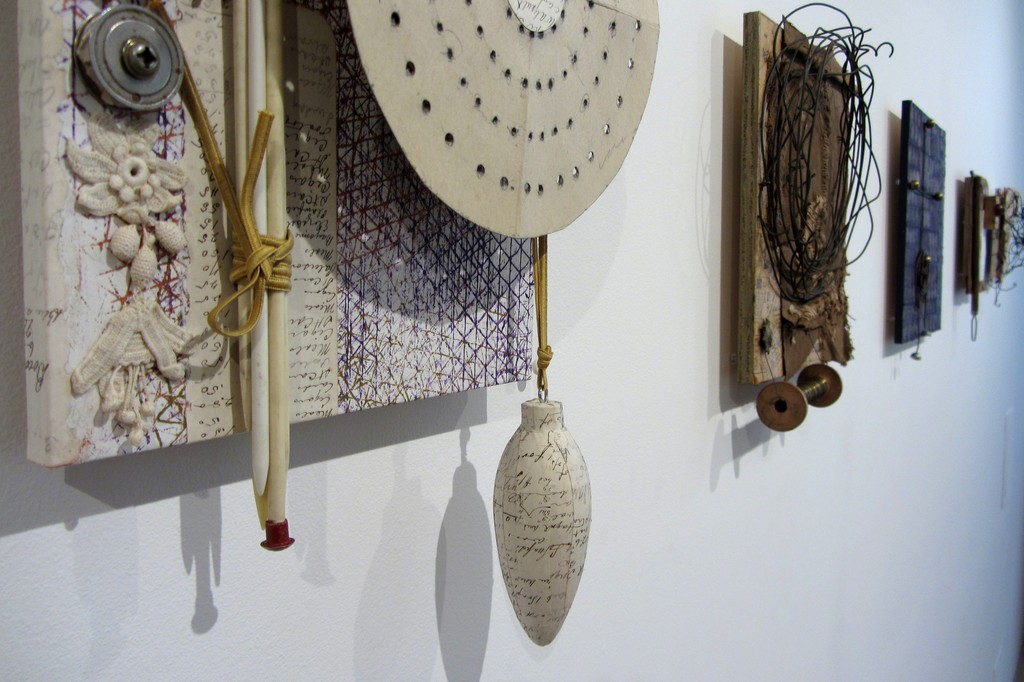 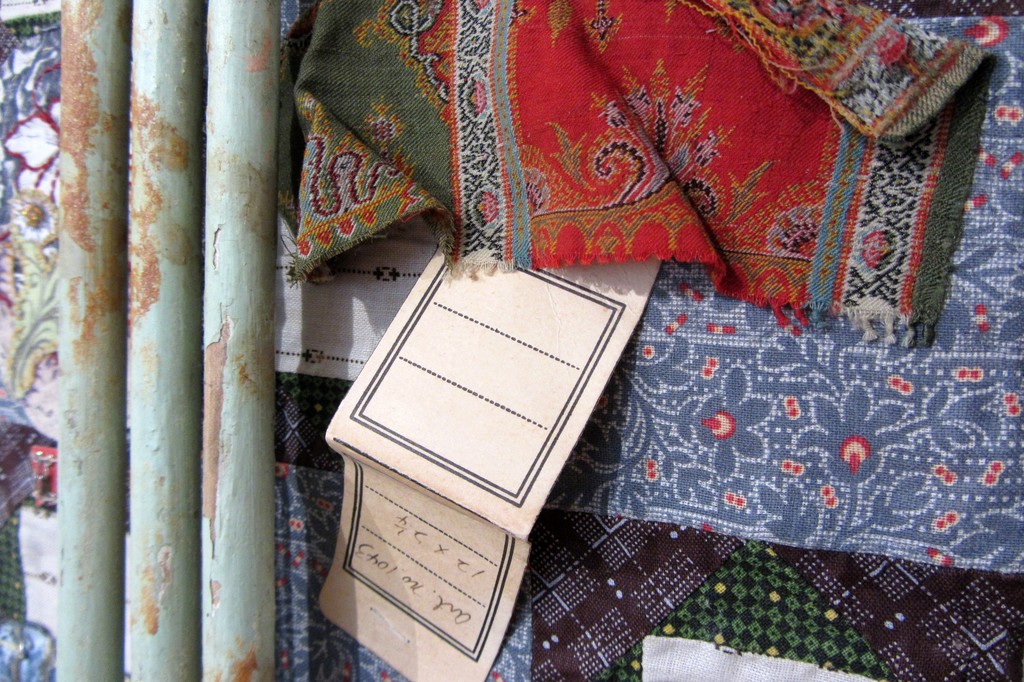 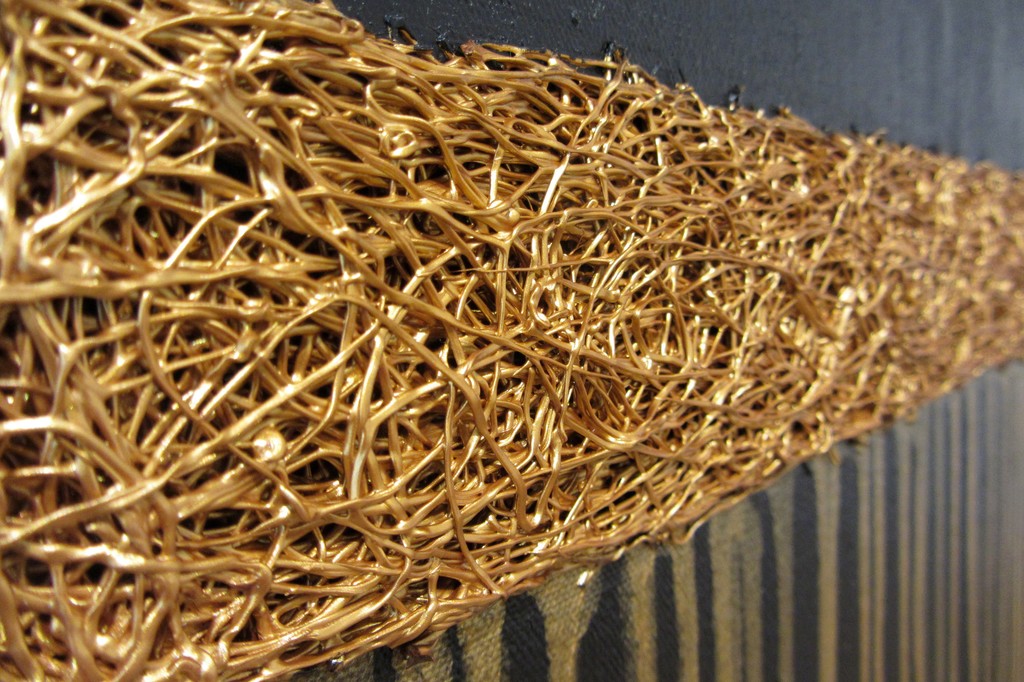 In The Story Teller, Liz Curtin unearths ephemera and found objects in her mixed media works to tell a story and speak to the history of time and place. In an effort to gain control of myriad objects, Curtin utilizes remnants from past lives to give them new meaning. Vintage textiles, old book parts, found wood and wire, as well as artist made objects are combined to create a sacred space in each piece. Curtin states, ”Inspiration and process are most often sparked by the materials and objects used. One object informs another and another as they in turn work to bring the piece to its conclusion.”

Liz Curtin was born in the Bronx and was raised on Long Island. She attended Montclair State College in New Jersey, studying textiles and papermaking, and Penland School in North Carolina. Curtin has had fourteen solo shows including three at Franklin 54 Gallery. Her work has been featured in numerous group exhibitions. Curtin’s work was selected for Transformations East, at the Fuller Craft Museum in Brockton, MA, curated by Lloyd Herman, founding Director of The Renwick Gallery of the Smithsonian Museum. Her work and essay were included in the show catalog. Her pieces are in many collections in the US and abroad. Curtin is also a singer songwriter and a teaching artist at the Carter Burden/Leonard Covello Senior Program in NYC.

In The Story Teller Michael Fair presents recent paintings inspired by spiritualty, perseverance, and journeys. During his travels to India and South East Asia Fair noted, “The temples are largely decorated with gold leaf on a black background along with a kaleidoscopic palate of color.” His latest works, inspired by this luminous architecture, are three-dimensional sculpture-like paintings consisting of layers of thin tubular strands of acrylic paint applied with medical implements.

Michael Fair, a self-taught painter, moved to New York's East Village in 1981 to attend the New York University School of Law’s advanced Tax Law Program. After years of practicing tax law he abruptly quit after being diagnosed with a then fatal disease. To handle the shock Fair decided to travel; he bathed in the healing waters of Lourdes, France and read Life after Life by Raymond Moody, M.D. Fair then visited India and South East Asia, where he was spiritually energized by India’s holiest and most ancient city, Varanasi. In 2013, after returning to New York, he felt an intense desire to express himself creatively. He largely attributes this need to create art directly from Varanasi's energetic effects on him. Additionally, Fair’s mother had studied art under Thomas Hart Benton at the Kansas City Art Institute. Her positive experiences there also inspired him to experiment with painting. Fair currently lives and works in the Chelsea district of New York City.