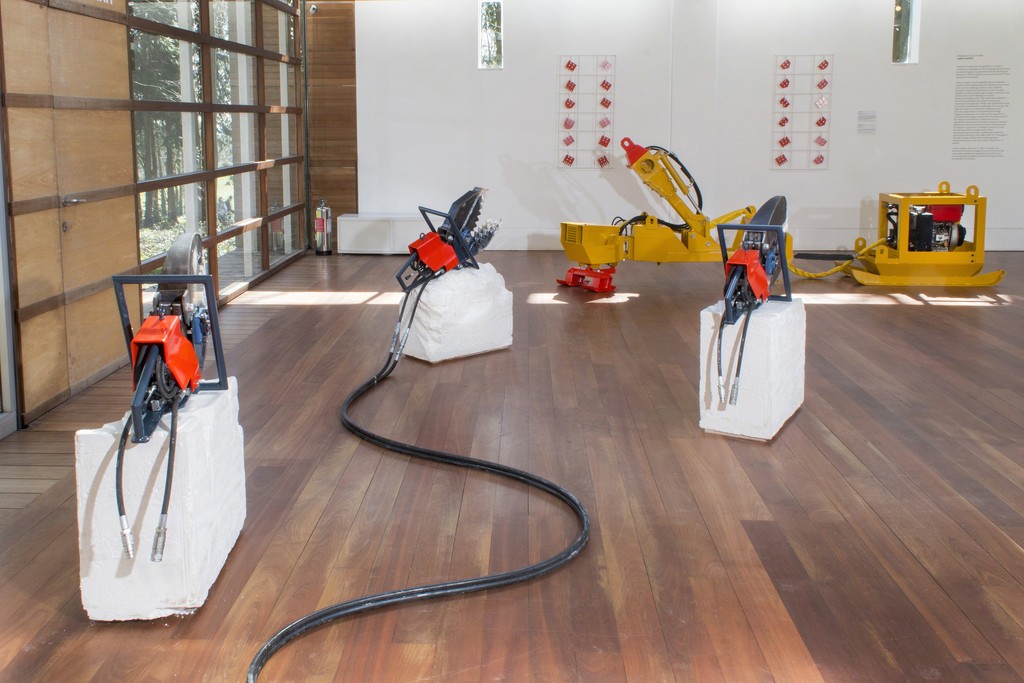 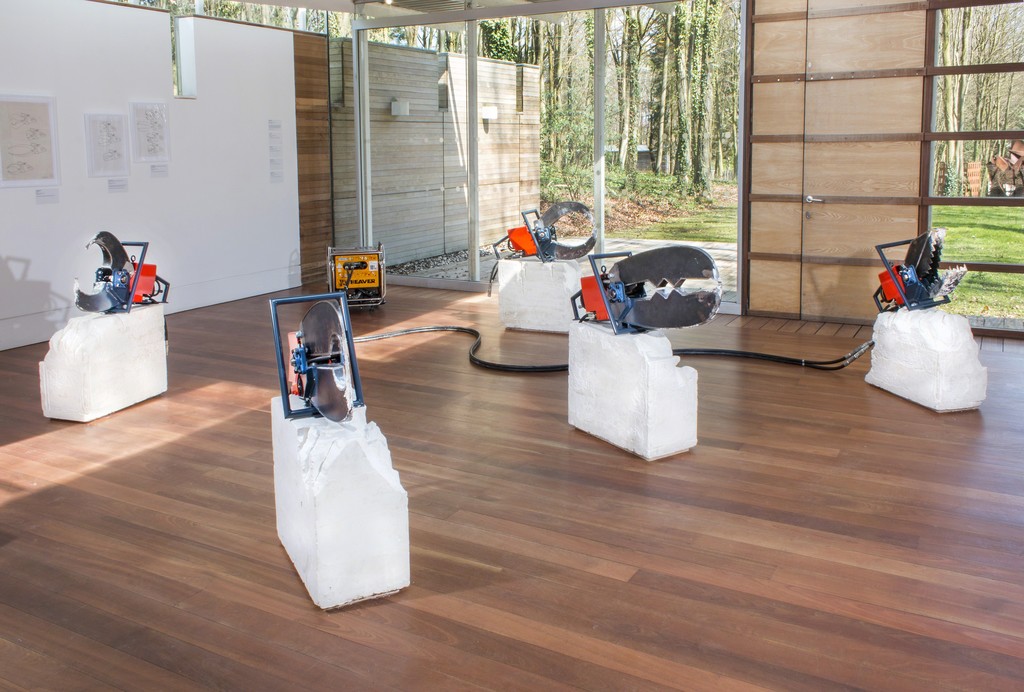 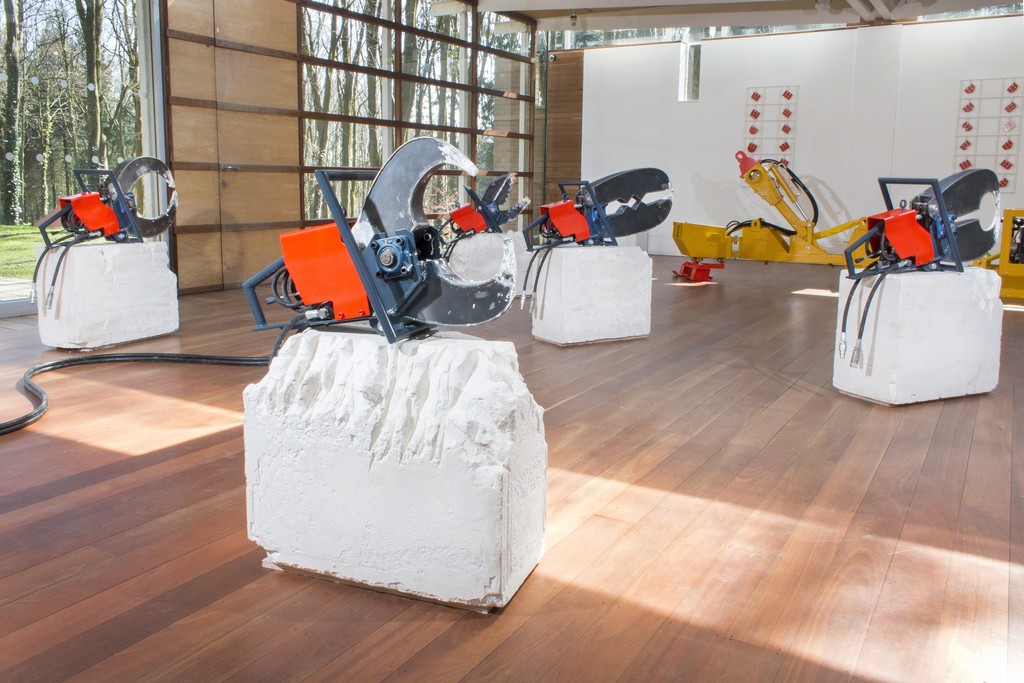 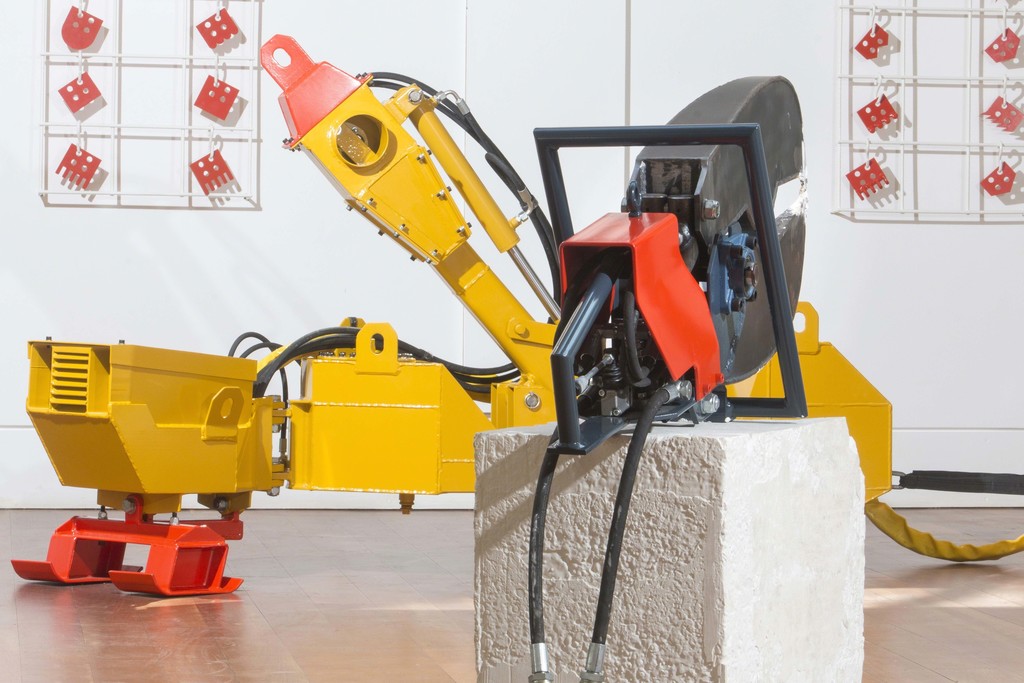 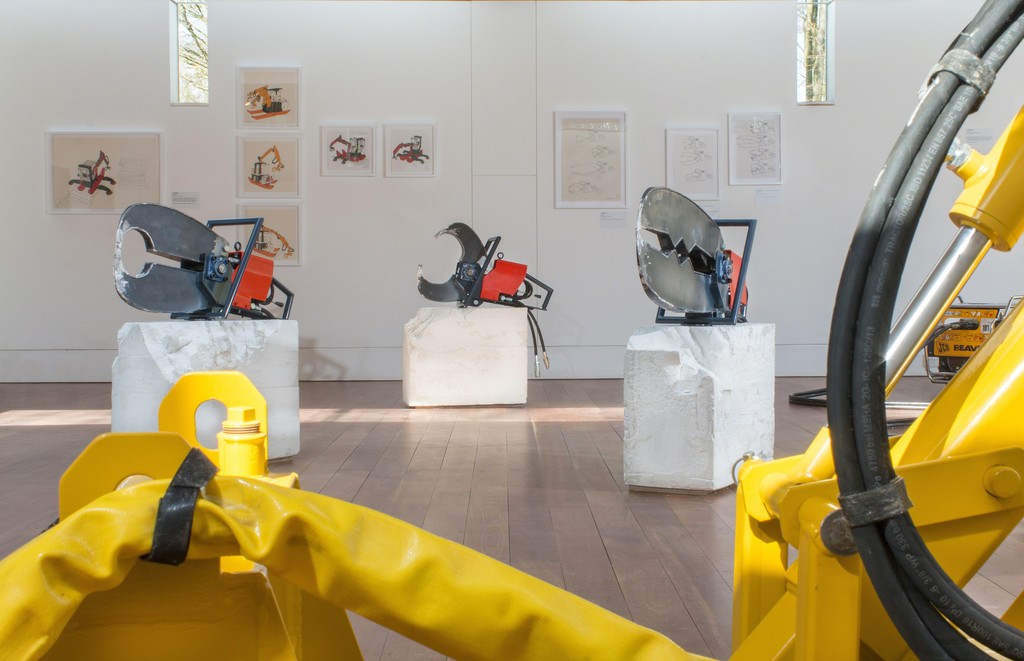 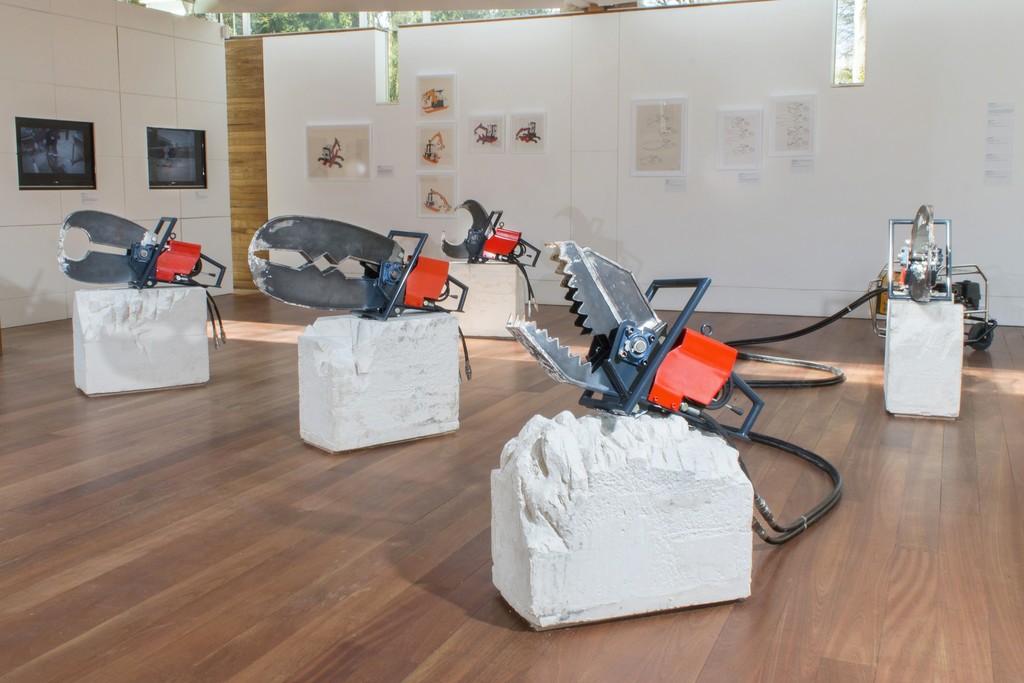 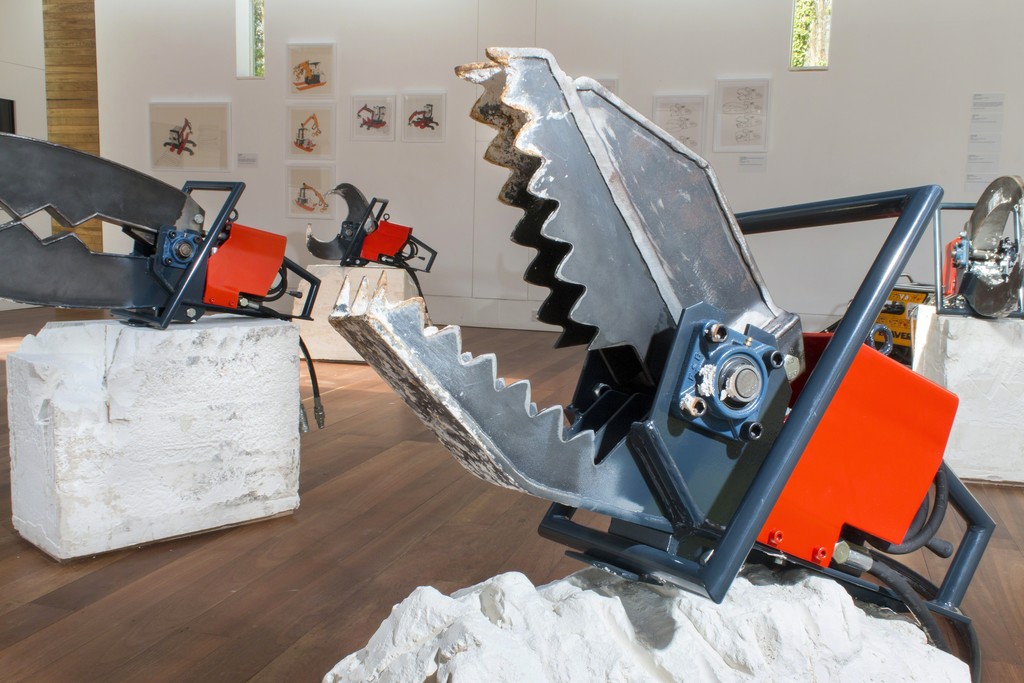 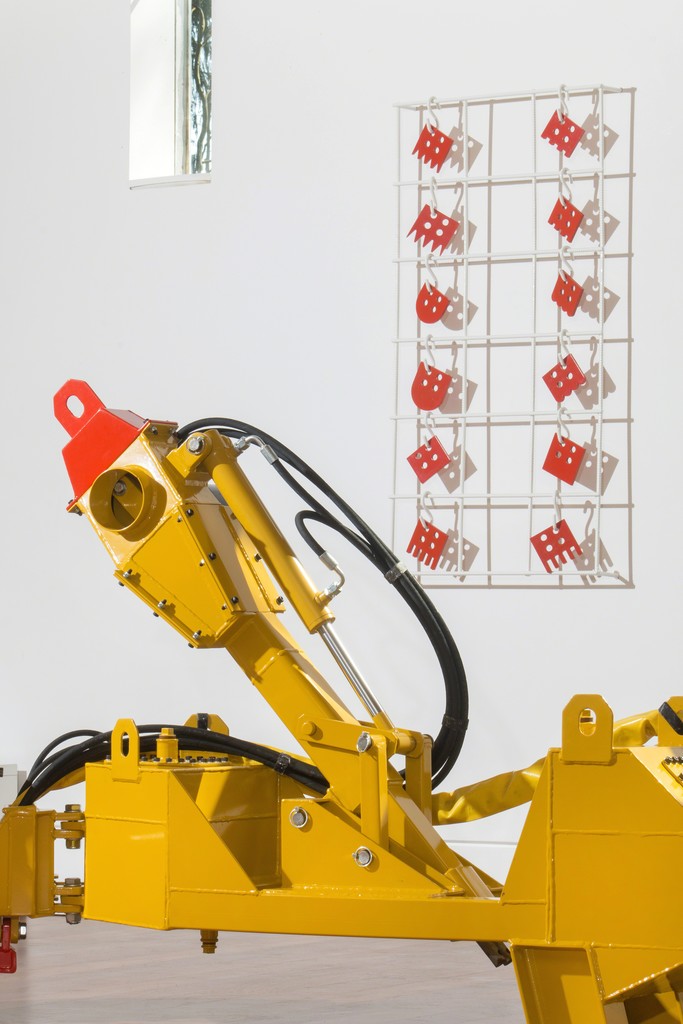 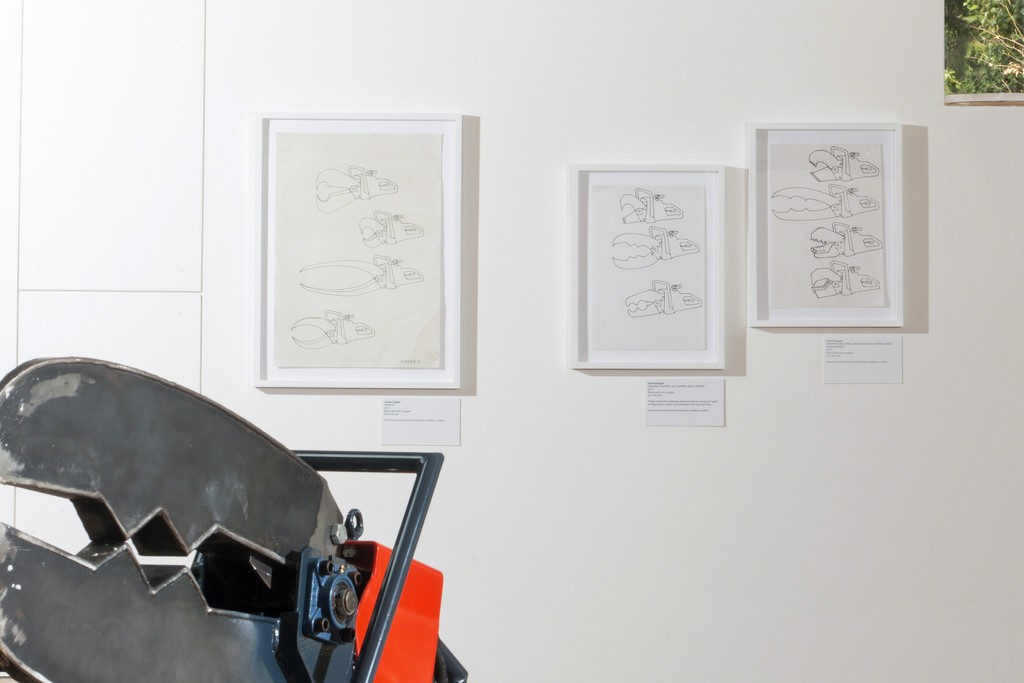 To coincide with the unveiling of Greenhorn – the new work by British artist-engineer James Capper commissioned by the Cass Sculpture Foundation for 2015 – the foundation’s Main Gallery presents an exhibition of sculpture, drawing and film devoted to Capper’s work.
Over the course of his career, Capper has developed a number of different divisions within his practice, each dedicated to the creation of machinery with different aesthetic and practical functions. Greenhorn is the first piece in his Material Handling division, joining his other creations and sketches in the areas of Earth Marking, Offshore, Carving and Aviation. He regards these functional divisions as ‘family trees’.
Blurring the boundaries between art and engineering, the structure of his practice and the nature of his output reflect Capper’s fascination with the functions and aesthetics of industrial machinery. Each work (and, for Capper, the concept of ‘the work’ extends beyond the finished piece to include both the planning process behind it and the act of demonstrating it in action) is designed to interact with its environment in a specific way, co-opting the setting into the function of the sculpture. Many of his pieces are equipped with unique ‘marking’ components ‘teeth’ or talons that tear the earth or otherwise alter the landscape around it –in effect, making his machines installations that create sculptures from their surroundings.
Reminiscent of the movements of spiders or caterpillars (which Capper has studied extensively), the actions of his machines are characterised by the slow, linear motions of hydraulic engineering. Capper is influenced by the Land art movement of 1970s America, when figures such as Robert Smithson employed the actions of machines to create sculpture from the natural landscape, casting aside the formalism, methods and materials of traditional art.
Capper also derives inspiration from the works of prolific inventor Robert Gilmore Le Tourneau, who conceived and created a number of earth-moving machines to resolve practical problems. Many of the technologies he pioneered are still in use today, and Capper draws on them in his work to explore how industrial materials might transcend their functional limitations to become both sculptures in themselves and agents of creativity.
Hydraulic Sculptures provides a fascinating insight into the breadth of Capper’s ambition, the complex processes behind his works, and the compelling vision of an utterly unique multidisciplinary artist.

About James Capper
Born in 1987 and trained at the Royal Academy of Art, James Capper is as much engineer as sculptor.
Interested in the mechanical process of art creation as well as finished forms, he divides his practice into several divisions –Earth Marking, Offshore, Aviation, Carving Tools and now Machine Handling –to reflect the varied functions of the machines he creates.
James’s work has previously been seen at CSF in 2009, and his works have been exhibited worldwide, including a solo exhibition at Yorkshire Sculpture Park in 2013. In 2009, he won the Royal Academy’s Jack Goldhill Award for Sculpture and in 2011 he received the Royal Society of British Sculptors Bursary Award.
www.jamescappersculpture.com
About Cass Sculpture Foundation
Occupying 26 acres of beautiful West Sussex countryside, the Cass Sculpture Foundation is a charitable commissioning body based in Goodwood. Established in 1992 by Wilfred and Jeannette Cass, the Foundation is dedicated to showcasing monumental modern works by emerging and established artists and maintains an ever-changing outdoor display of 80 contemporary sculptures, all of which are available for sale. Among the 400 works commissioned by the Foundation in its 20-year history are pieces by Anthony Caro, Marc Quinn, Rachel Whiteread, Gavin Turk and a host of other ground-breaking artists.
www.sculpture.org.uk