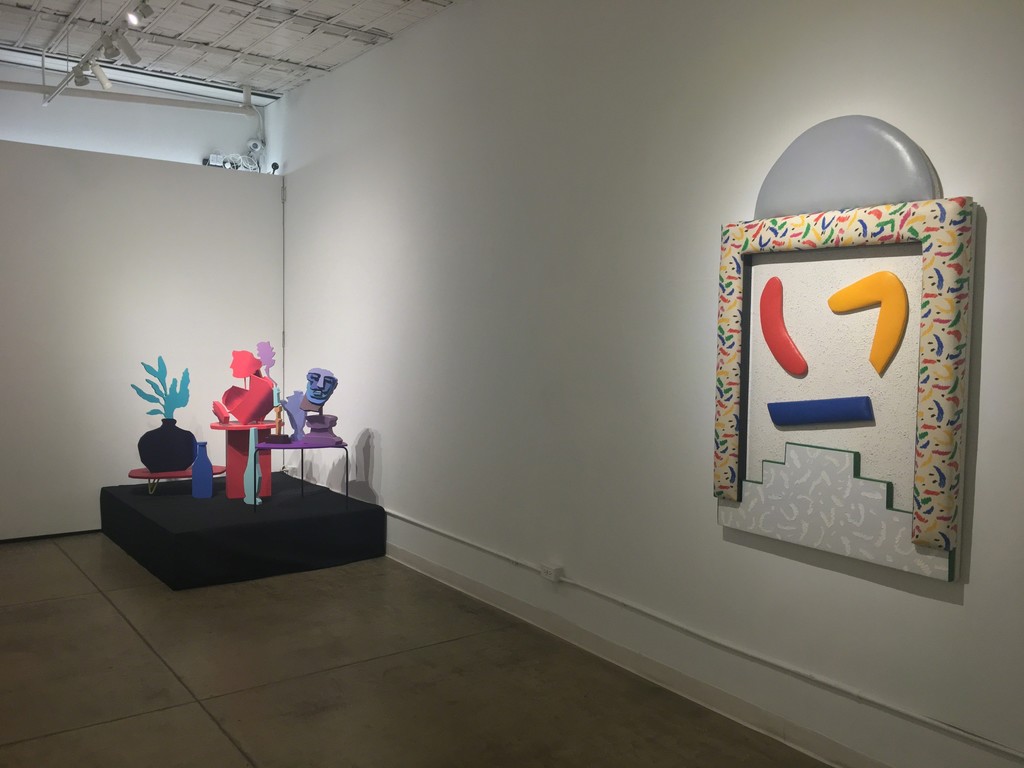 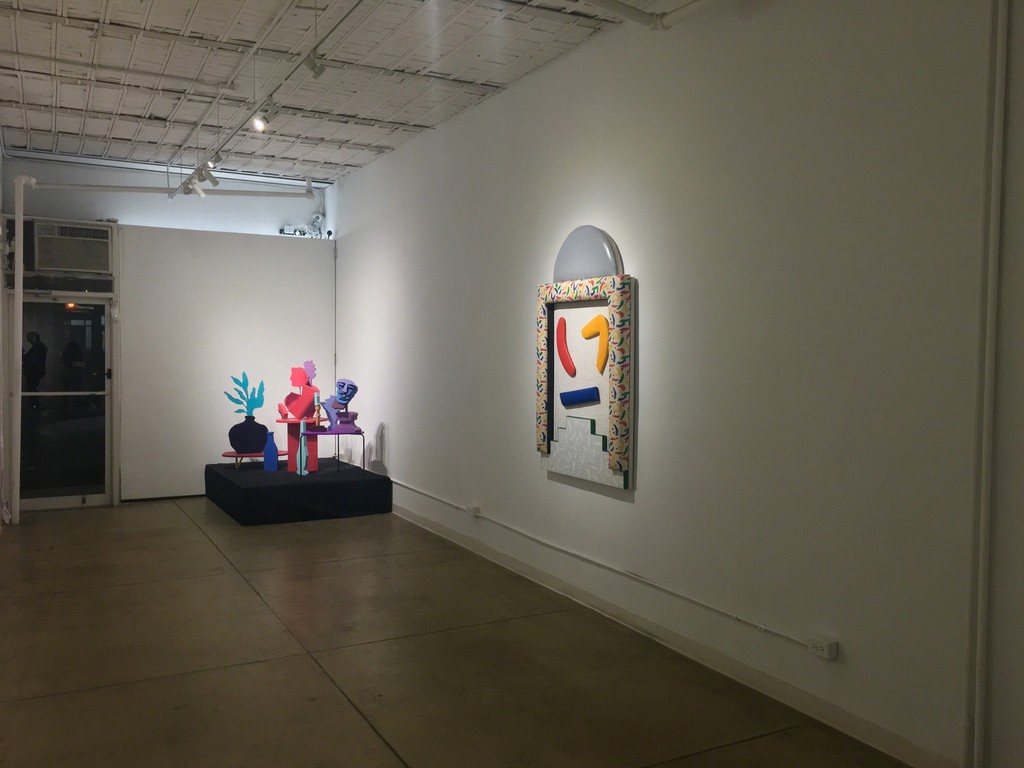 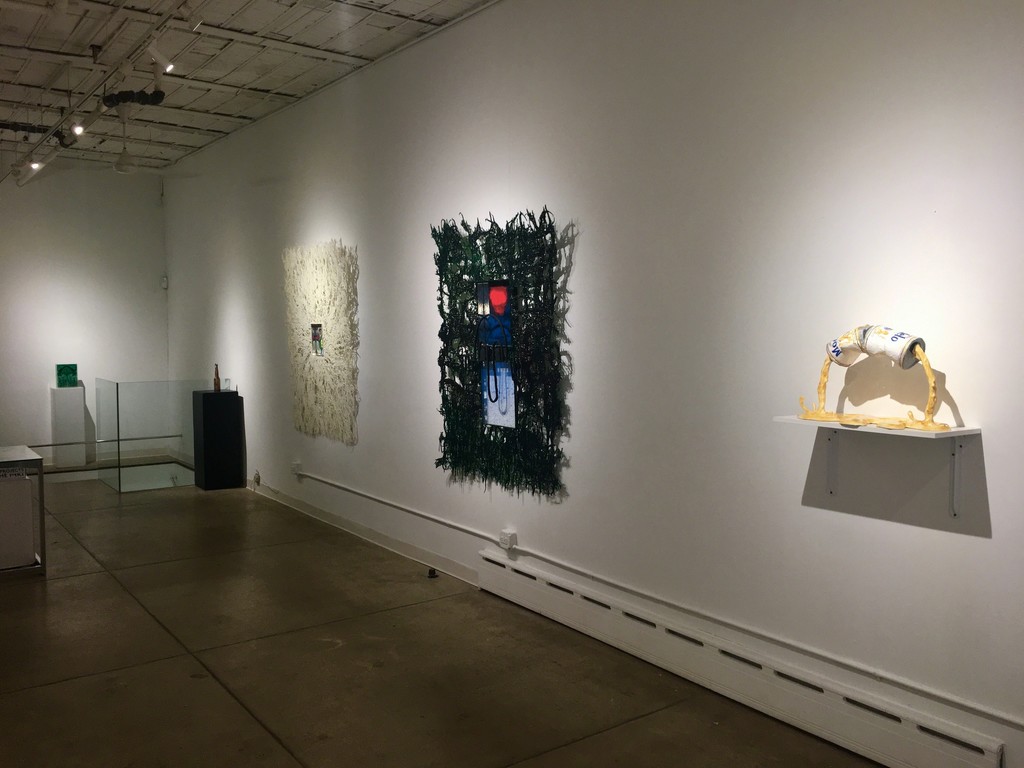 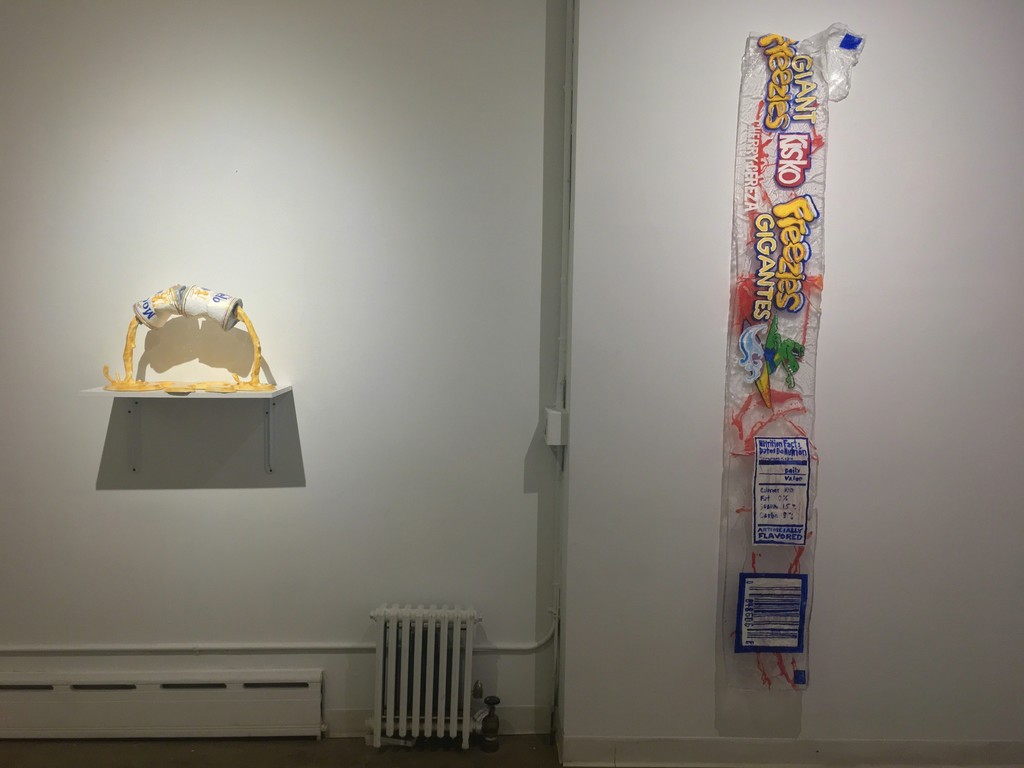 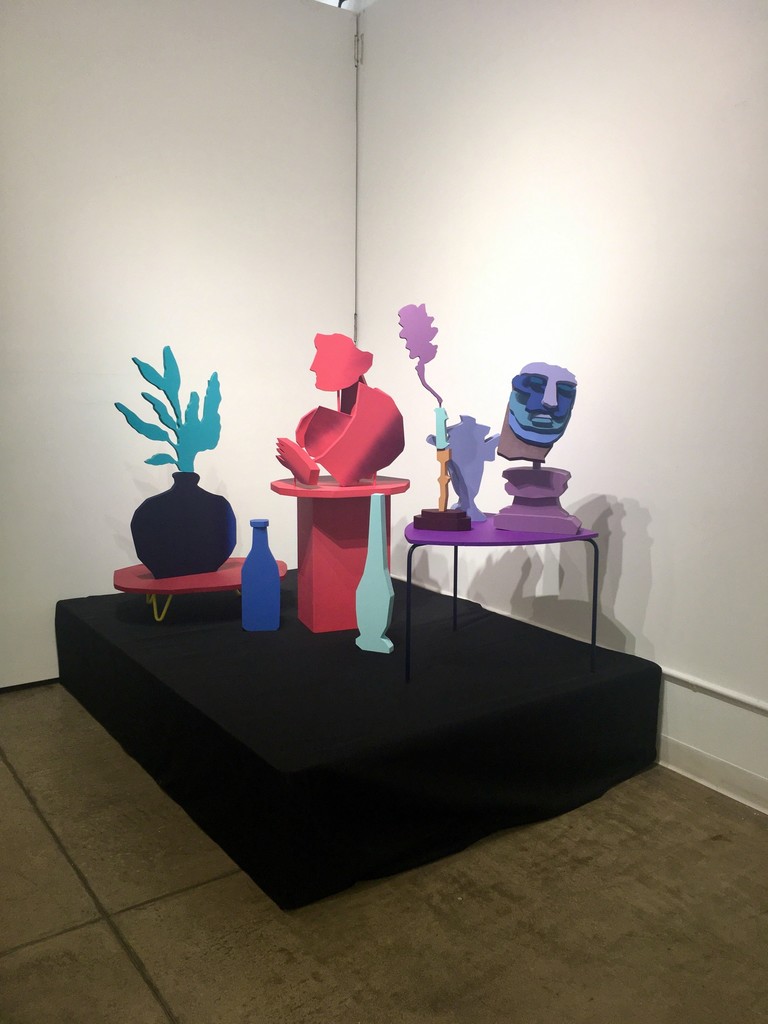 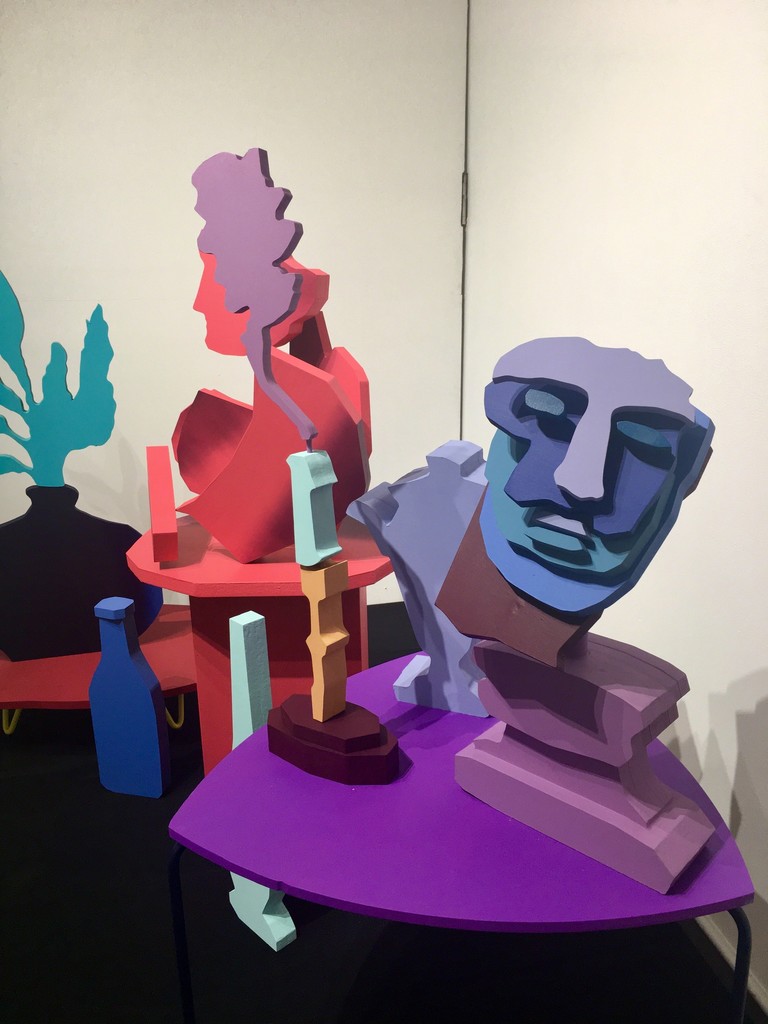 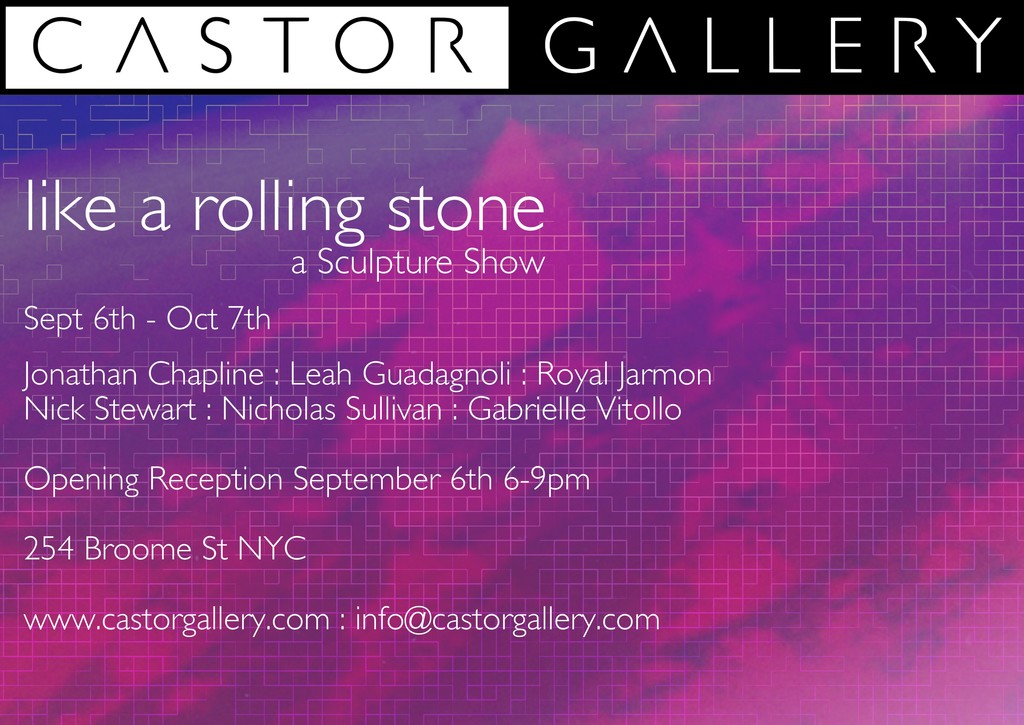 Castor Gallery is pleased to announce like a rolling stone, an exhibition of new works from Jonathan Chapline, Leah Guadagnoli, Royal Jarmon, Nick Stewart, Nicholas Sullivan & Gabrielle Vitollo. Producing work in different mediums which include resin, glass, found objects, plaster, vinyl & wood, these artists continue to explore and push the boundaries of what can be considered material - and how both technology and traditional practices create finished works that are free-standing and wall hung. The exhibition will run from September 6th - October 7th, 2017 with an opening reception on Wednesday September 6th at 254 Broome St NY, NY from 6-9 PM.

Jonathan Chapline was born in Savannah, Georgia, and raised in Waco, Texas. Chapline’s practice is about the exploration between the digital and the physical. He emulates digital modes of representational space produced physically through paint and sculpture. Sourcing different imagery from stock photos, movie scenes and photographs, Chapline combine them to create the overall image which plays into familiar archetypes of anonymous online identities. Modes of incidence from the digital sources are retained in the overall painting and sculptures through the shapes, the colors, and the gradients. Digital elements are achieved through the hard edge lines in paint which translates as the pen tool from Photoshop. Through the process, the paint builds up giving tactile experiences in a digital language. Chapline holds a BFA from RISD. Past gallery shows include The Hole (NYC), Canada Gallery (NYC), Castor Gallery (NYC), Orgy Park (Brooklyn). Upcoming solo show will be at Victori + Mo (Brooklyn). Prominent collections include The Rema Hort Mann Foundation.

Leah Guadagnoli lives and works in Brooklyn, NY. After receiving a BFA in Painting and Art History at the University of Illinois at Urbana-Champaign, she received an MFA in at Mason Gross School of the Arts at Rutgers University. She has exhibited in solo and group shows nationally, including with 247365, NY; Formerly Gallery, Brooklyn, NY; Mason Gross Art Gallery, New Brunswick, NJ; and Krannert Art Museum, Champaign, IL. In 2016 she was awarded a Vermont Studio Center Fellowship, and received the Yaddo Artist Residency Grant in 2015. Her work has been featured in New American Paintings, Roll Magazine, and Maake Magazine.

Royal Jarmon’s sculptures are primarily concerned with notions of illusion and space. Forms and textures seem to protrude from the surface of his sculptures through his understanding of spatial relations. The instantly recognizable cans of beers, paint tubes and other items from an art store or bodega have become common objects within his oeuvre, where Jarmon’s practice heavily involves building 3-D forms with a flatness of a 2-D world. Prior shows include a solo with Castor Gallery (NYC) & Gallery Urbane (TX). Group shows include The Hole (NYC), Luggage Store Gallery (CA) & Bass and Reiner (CA).

Many of Nicholas Sullivan’s sculptures seem flat. As painters these days often push toward 3-D, he pushes in the opposite direction. But Sullivan has even more in mind. He uses familiar images — a Japanese woodcut, cartoons, a child’s drawing of a jail cell, a baby from Second Life – and manipulates them. While they ring a bell, they also jangle your perceptions. Nicholas Sullivan received a BFA from UMass Amherst, and a MFA in sculpture from MassArt, where he was the recipient of a Beker Scholarship, and the Robert D. & Nancy M. Gordon Scholarship. His work is in the Jiminez-Colon Collection, and has been included in exhibitions at Laconia Gallery, Hans Weiss Newspace Gallery, Gallery Ehva, Aviary Gallery, Proof Gallery, and Night in the Box, a juried exhibition and auction.

Los Angeles based artist Nick Stewart makes work within the realm of contemporary American folklore. His sculptures point inwards to a personal dialogue of conspiracy theories, a post nature world, high way culture and southwestern iconography. This will be Nick Stewart’s first time showing with Castor Gallery following multiple group shows on both east and west coasts, and a solo show at 55 Gansevoort in 2015.

Gabrielle Vitollo is both a painter and sculptor based out of Brooklyn NYC. Prior shows include The Knockdown Center, Listasafn Arnesinga Art Museum & WareHOUSE, Marguilles Collection; youngARTS Exhibition. This free-standing translucent sculpture is part of a series investigating mind-body themes found in sci-fi and holy relics. The sculpture materialized over weeks as I laser cut and assembled the plexiglas, meticulously arranged hardware and bones found in my Pennsylvanian hometown's woods, and dyed the gel to my desired shade of blue-green. Employing minute detail in an attempt to render a work that invites and rewards scrutiny, I see art as a means to bring us closer to the universe's poetics and its terms.