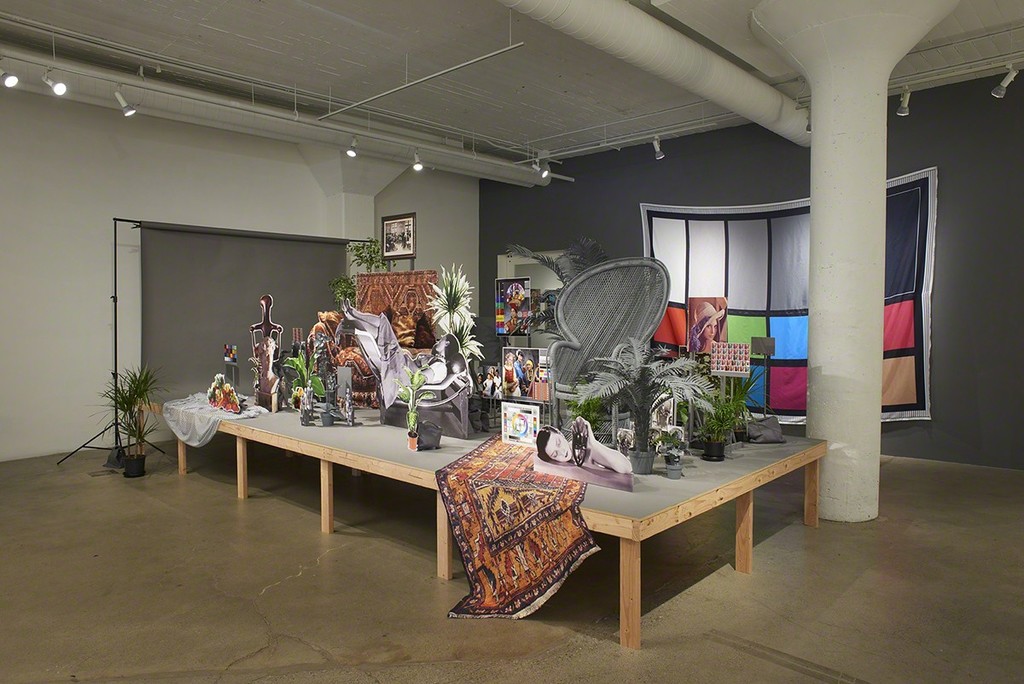 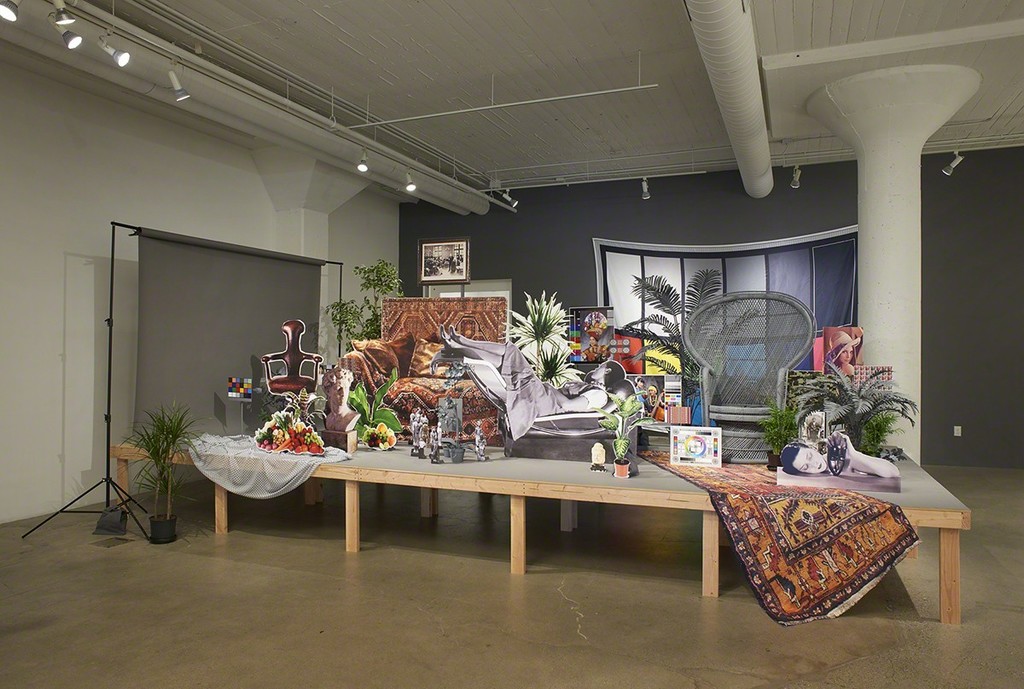 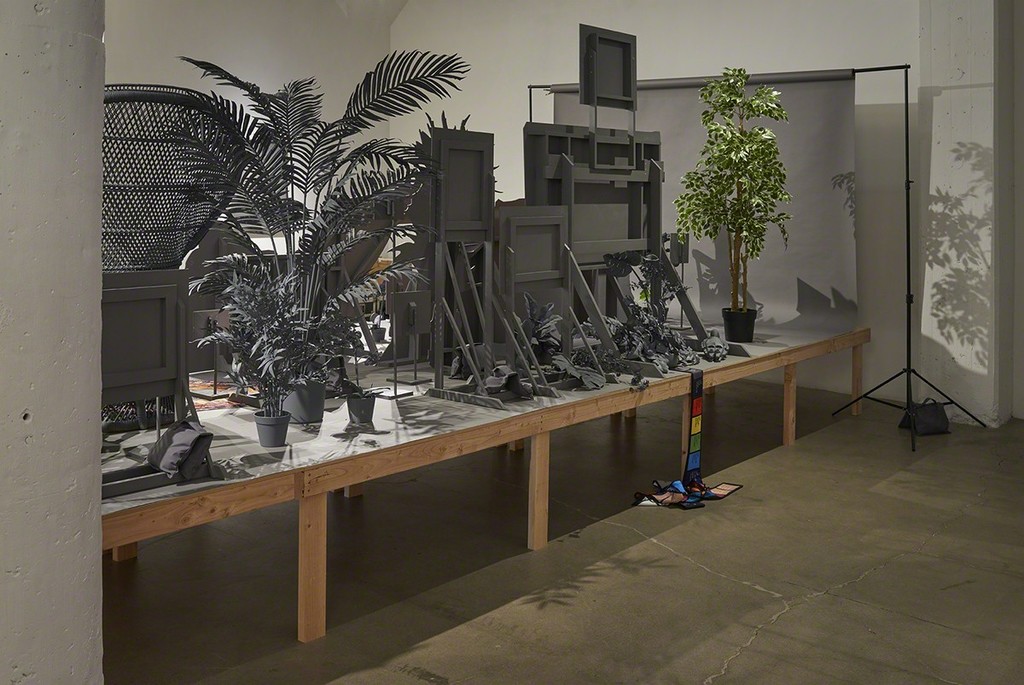 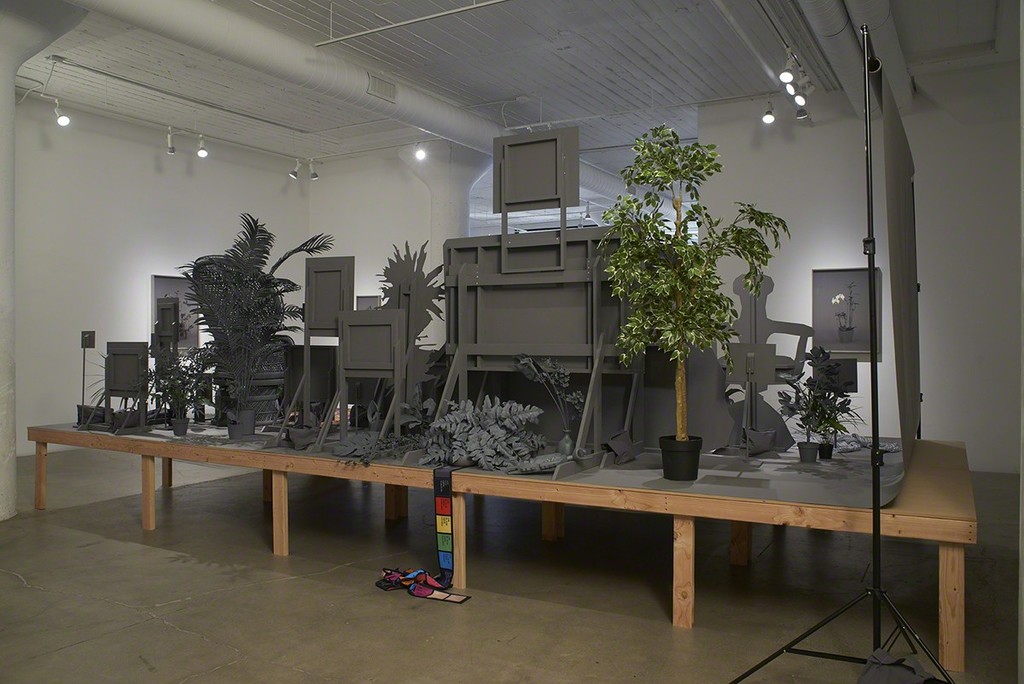 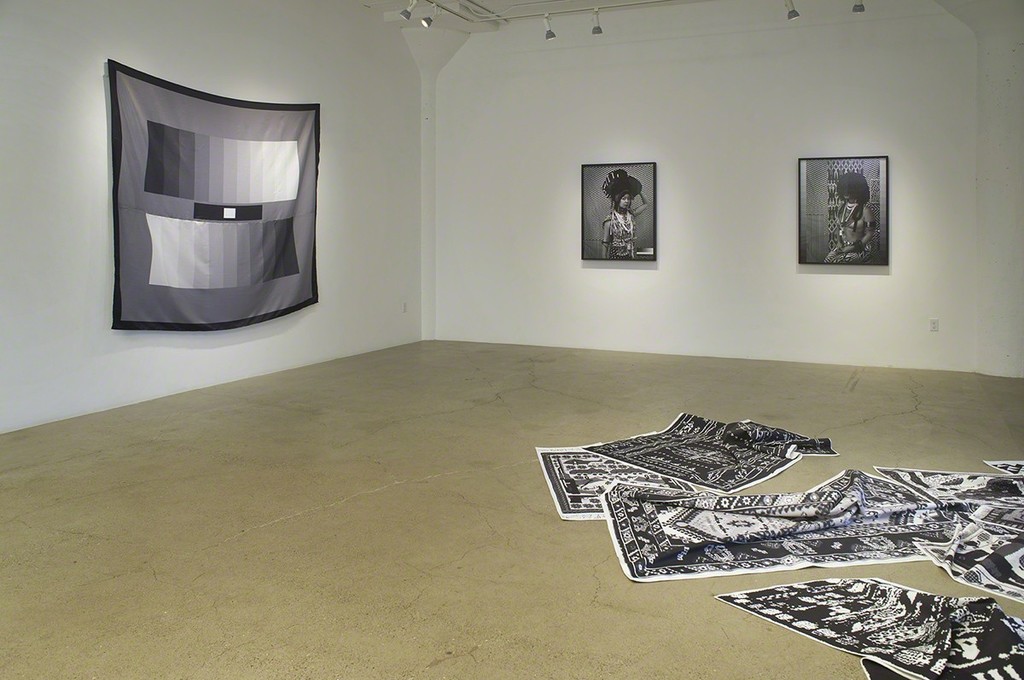 Syjuco splits the exhibition into two sections: the front gallery focuses on a stark black and white palette, while the back gallery contains a physical collage of colorful images and objects that attempts to “color calibrate” itself against a giant neutral gray backdrop. In the black and white area, framed photographic images from the artist’s Cargo Cults series revisit historical ethnographic studio portraiture via fictional display. Syjuco used mass-manufactured goods purchased from American shopping malls and restyled them to highlight the popular fantasies associated with the current craze for ethnic patterns. Purchased on credit cards and returned for full refund after the photoshoots, the items hail from the distant lands of Forever21, H&M, American Apparel, Urban Outfitters, Target, The Gap, and more. The graphic patterning creates a disruptive outline, shifting the viewer’s attention
from foreground to background in an attempt to “find” the subject. Syjuco’s digitally printed fabric works, Lossy Artifacts (RIPs), exploit the “problem” of digital degradation of compressed computer files (referred to as ‘lossy’ in computer speak). The fabric features images of Turkish, Afghan, and Pakistani woven rugs, downloaded mostly from eBay. Blown up and heavily pixelated, the vertigo produced by the works destabilize the original digital image files and bring to physical form cultural items squeezed through internet channels and global trading routes.

Our dedicated media room features Syjuco’s Ornament + Crime (Villa Savoye), (2013), a 22-minute video from the artist's Dazzle Camouflage series. This project positions the WWI military tactic of wrapping battleships in a graphic black-and-white pattern in a contemporary framework to consider globalization, migration, historical trauma and colonialism. Using anonymously-sourced digital files from the 3-D modeling program SketchUp, Syjuco’s video takes as its starting point architect Le Corbusier's 1931 iconic building, Villa Savoye, located outside of Paris. The haunting, animated walk-through of the Modernist structure is overtaken with disruptive black-and-white graphics of folk patterns culled from France's prior colonial era: Moroccan, Algerian and Vietnamese textiles. Found sound files recorded from the streets of the ex-colonies provide a dislocated, invisible audio backdrop. As a historical mash-up of publicly sourced files, this new version of Villa Savoye attempts to transcribe the colonial and cultural history of a Western icon back upon itself as if it were a body to be read and re-read.

STEPHANIE SYJUCO creates large-scale spectacles of collected cultural objects, cumulative archives, and temporary vending installations, often with an active public component that invites viewers to directly participate as producers or distributors. Working primarily in sculpture and installation, her projects leverage open-source systems, shareware logic, and flows of capital, in order to investigate issues of economies and empire. Recent projects include a collaboration with the FLACC Workplace for Visual Artists in Belgium on a body of works utilizing 3-D scanning of Belgian and Congolese antiquities to produce hybrid ceramic objects addressing the legacy of colonialism, empire, and trade routes. She is a 2014 Guggenheim Fellow and is currently developing a two-year project commission for the San Francisco Museum of Modern Art under the topic of “Public Knowledge,” excavating and amplifying hidden bodies of knowledge.
Born in the Philippines, she received her MFA from Stanford University and BFA from the San Francisco Art Institute. She has shown extensively nationally and internationally, and her work has been included in exhibitions at MoMA/P.S.1, the Whitney Museum of American Art, SFMOMA, ZKM Center for Art and Technology, Germany; Z33 Space for Contemporary Art, Belgium; the Havana Biennial, The Asian Art Biennial, and The California Biennial, among others. She is represented by Catharine Clark Gallery in San Francisco and Ryan Lee Gallery in New York. Syjuco is an Assistant Professor in Sculpture at the University of California, Berkeley and lives and works in Oakland.