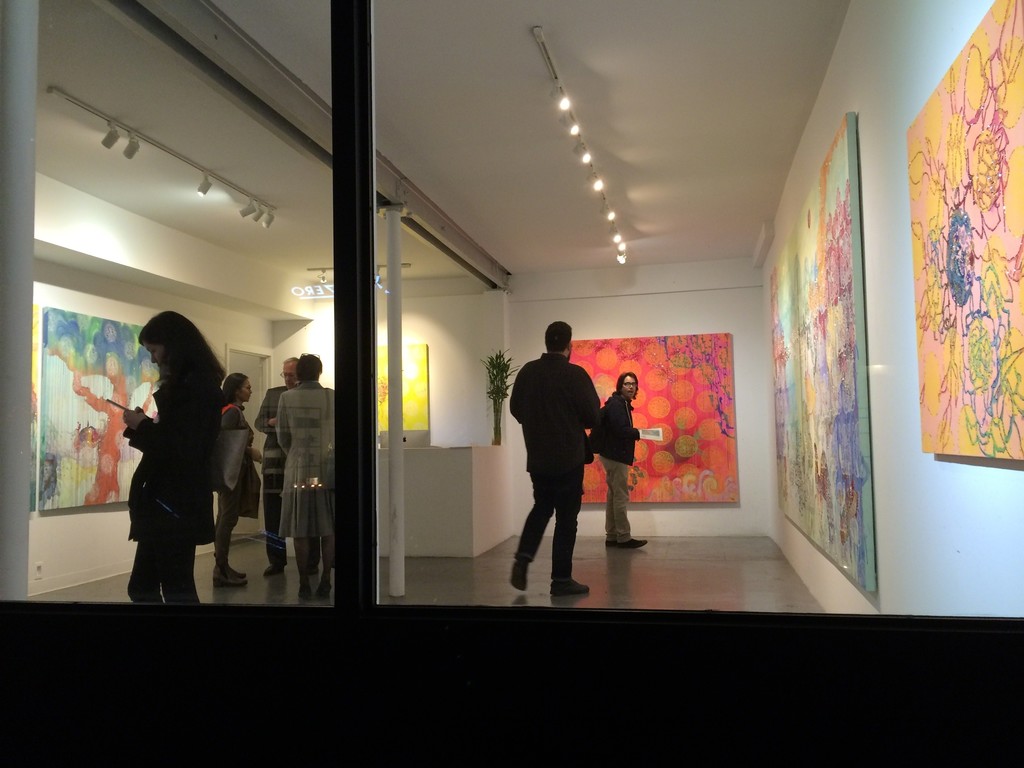 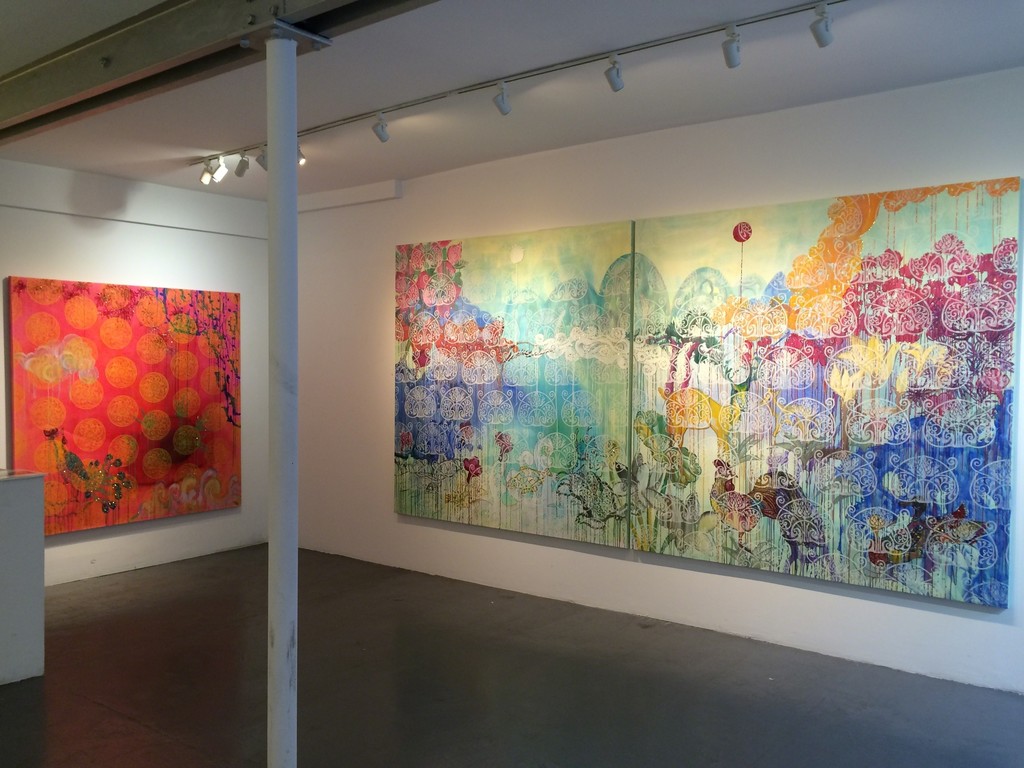 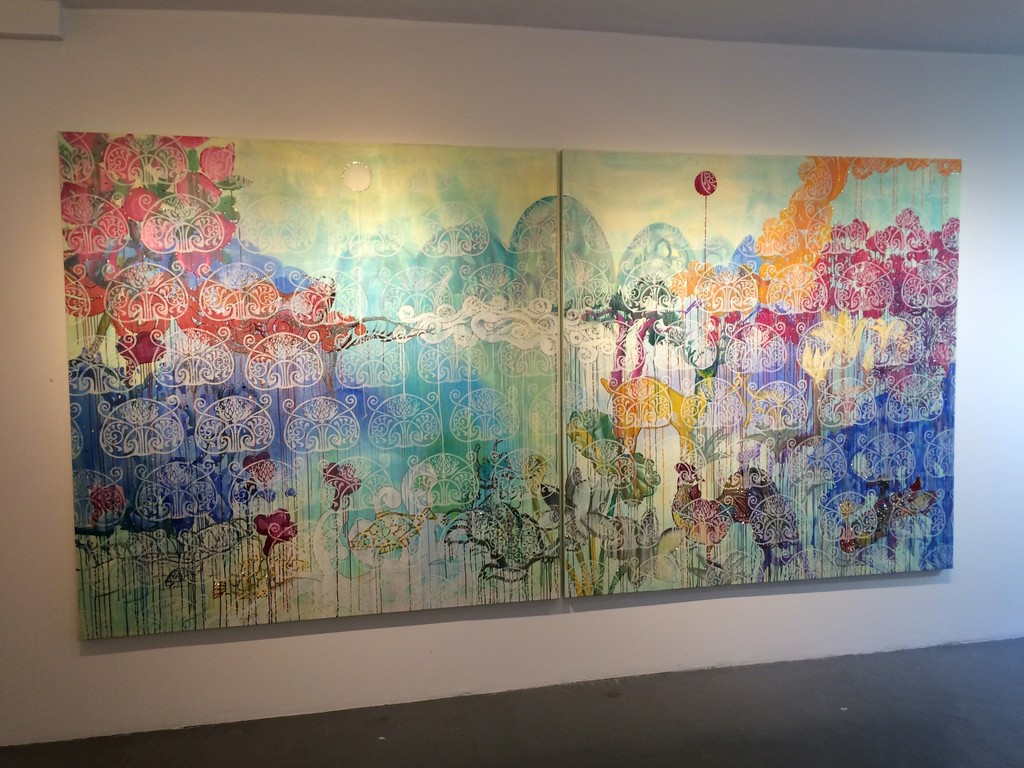 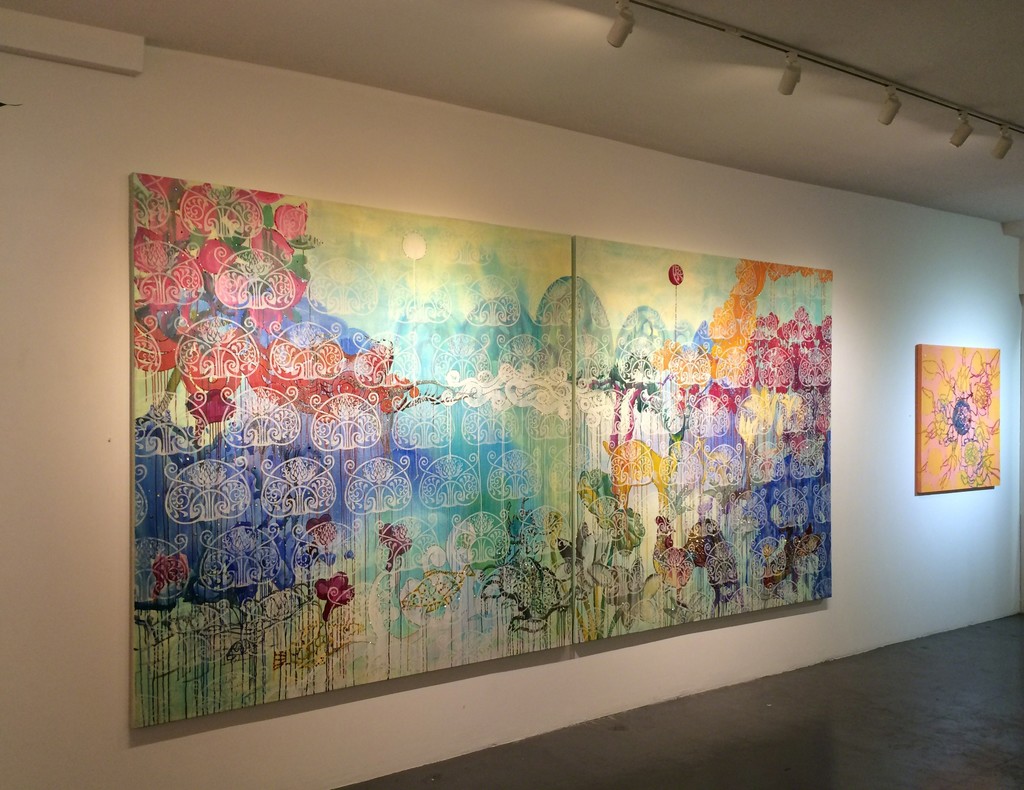 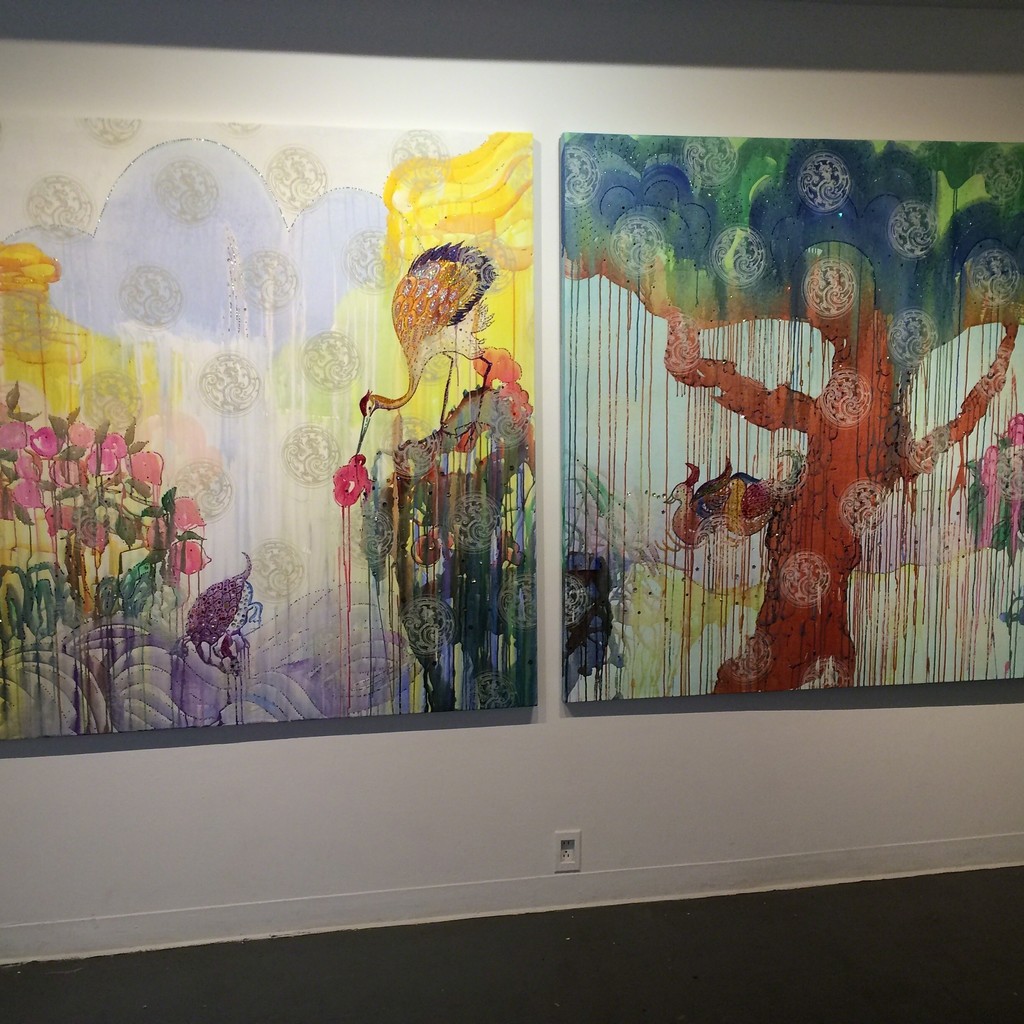 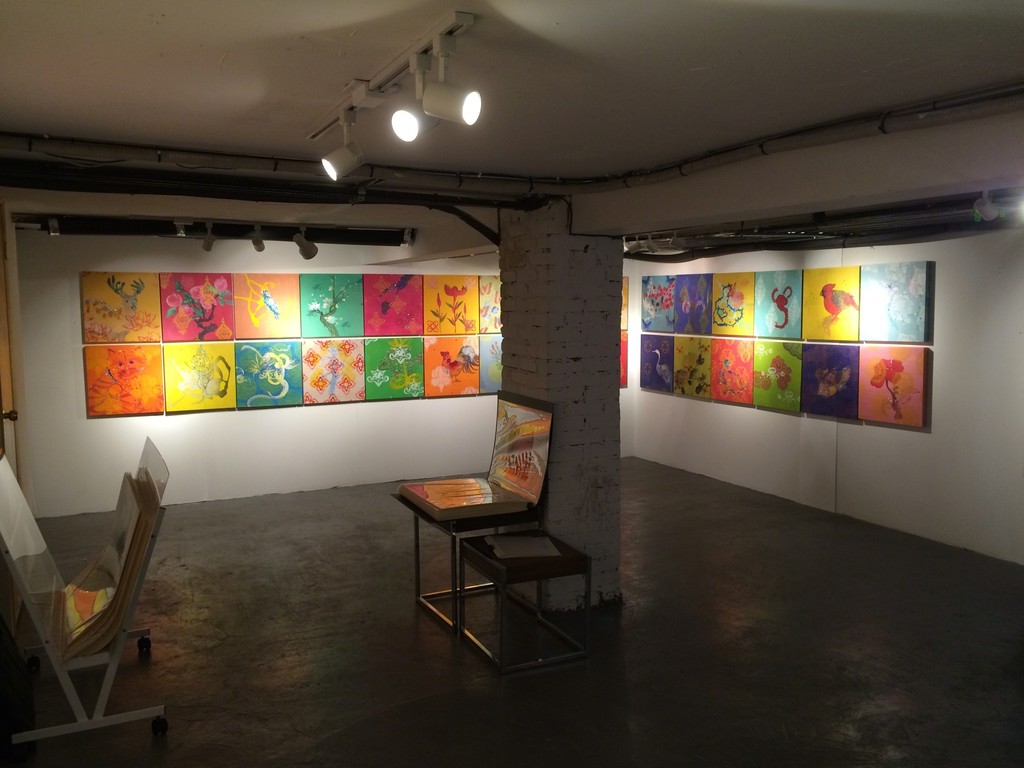 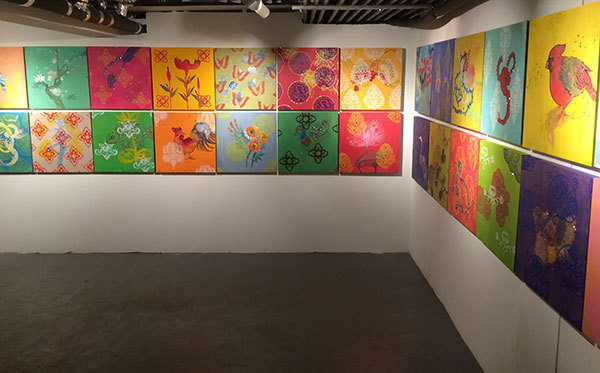 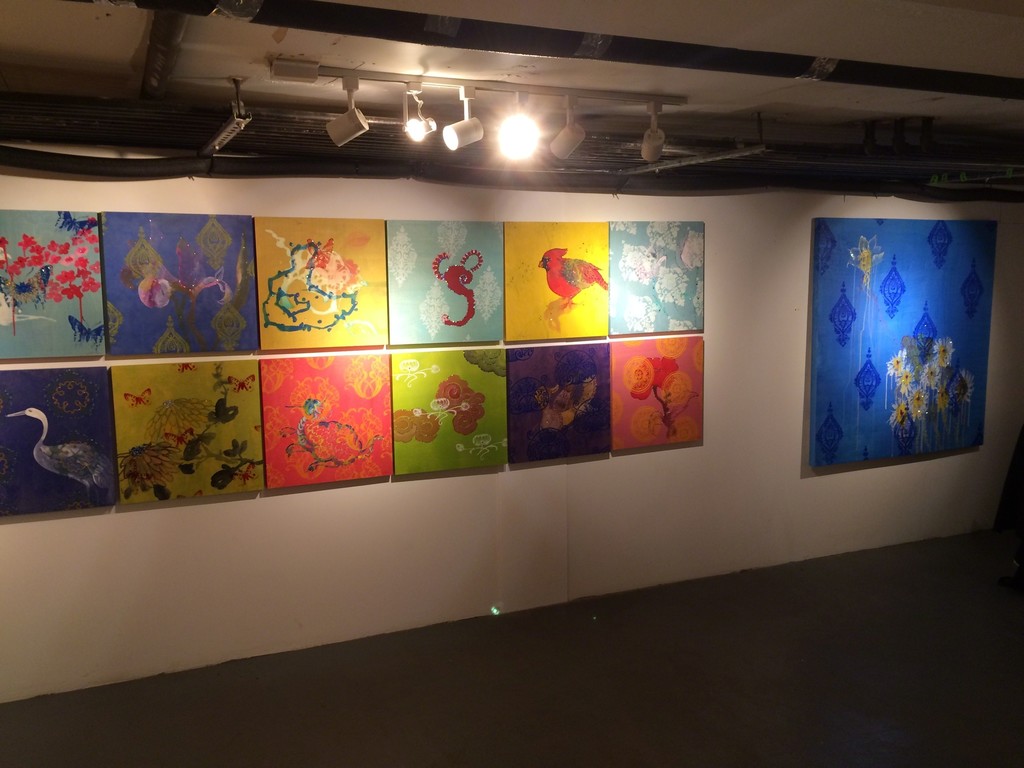 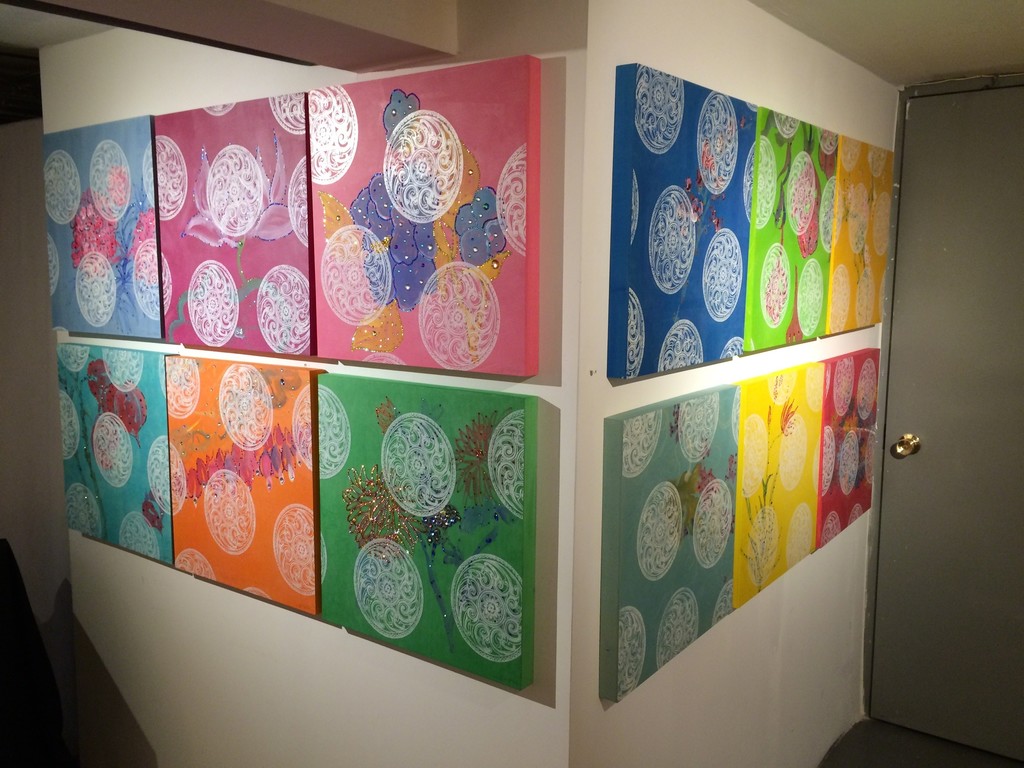 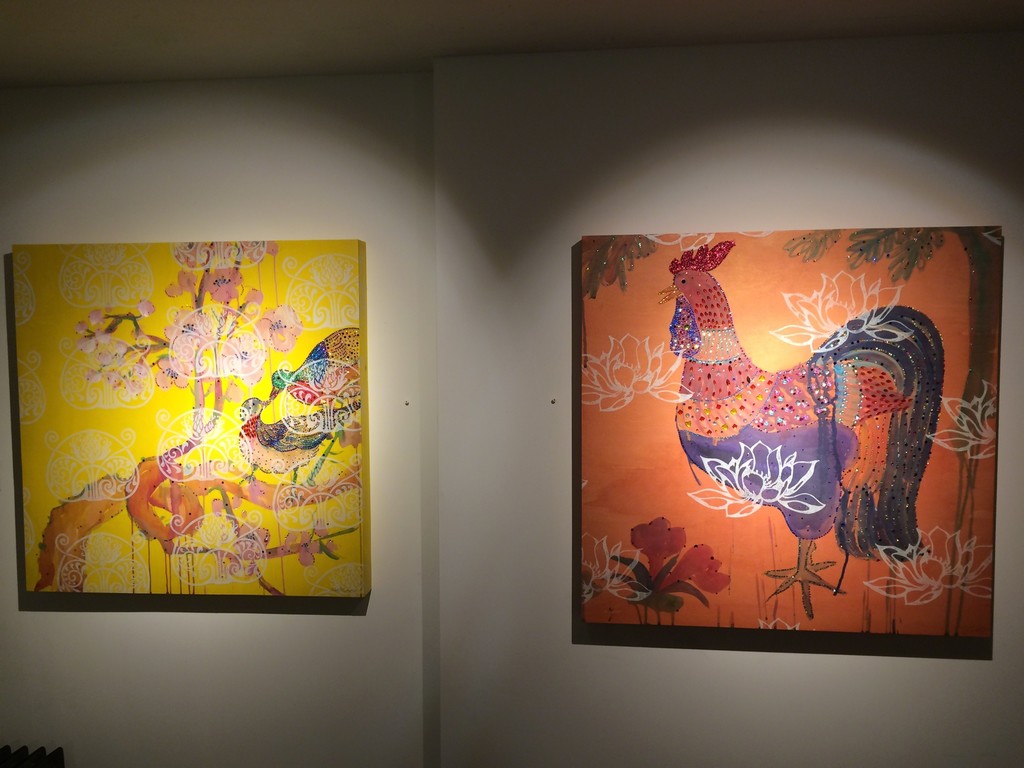 January 20, 2016 New York, NY, The Paradise Between exhibition demonstrating artist Hee Sook Kim’s affinity for hybrid identities opens at Causey Contemporary with a public reception on March 11, 2016 from 6 - 8 pm. This exhibition, featuring Hee Sook’s mixed media paintings which combine western oil colors with Asian watercolors and glass beads, is Hee Sook’s fourth solo show with the gallery since beginning to work with Causey Contemporary in 1999. The exhibition will take place at 29 Orchard St. at the gallery’s lower east side
location in New York City and runs through April 10, 2016.

Ms. Kim’s most recent paintings, to be featured in Paradise Between, takes as a subject, both in form and imagery,
Korean historical landscape paintings, specifically the so-called Longevity Paintings (or Sip Jang Saeng Do in Korean) which were typically only made by upper class men. She prints patterns using western oil colors on top of the landscape images traditionally used in Asian paintings and created with water based colors. Thus Ms. Kim transforms the masculine initial layer with a feminine “veil”. Next she covers the surface with glass beadwork to speak against the power of men in Korean cultural history. Each painting incorporates elements of the Sip Jang Saeng Do or elements of long life - sun, mountains, water, clouds, rocks/stone, pine trees, mushrooms of immortality, turtles, white cranes, deer with bamboo and peaches and so creates a place of immortality or “Paradise”: a place of peace, spirituality, happiness and healing.

Critic John Goodman, in his recent essay on Hee Sook Kim says that “Kim interweaves classical and modernist stances that are inspiring, leaving her viewers with a sense of interior calm and even joy taken from everyday life. Kim’s interest in cultural history anchors images at home in both the past and present. She salvages an ancient aesthetic, rendering its emotive memory alive and relevant within current artistic forms….She offers her audience the best of historical awareness, coupled with a remarkable feeling for contemporary issues and interest. She has made it clear that she intends to return to Korean matters as a simple demonstration of her complex identity - an Asian artist in a Western world.”

Hee Sook Kim was born in Seoul, South Korea in 1960 and immigrated to the United States in 1988. She has now spent exactly half her time in each country. Ms. Kim earned her MFA and BFA from Seoul National University and her MA from New York University. She has received grants from the Pollack-Krasner Foundation, the Leeway Foundation, The Wolf Kahn and Emily Mason Foundation and an acquisition award from the State Foundation of Culture and Arts in Hawaii. Additionally she has received a fellowship award from the Vermont Studio center and been Artist in Residence at the Santa Fe Art Institute, in New Mexico, The Center for Contemporary Printmaking in Connecticut, the Yongeun Musuem in South Korea, the Ascona Cetro Incontri Umani in Switzerland, the Collaborative Press in California, The Brandywine Workshop in Pennsylvania and The Millay Colony in New York.

Ms. Kim’s solo exhibitions include the Yongeun Musuem, The University of New Mexico Art Museum, The Phillips Museum of Art in Pennsylvania, The Kwanhoon Art Center in Korea, The Indianapolis Art Center, Dam Gallery in Korea, Artforum gallery and Causey Contemporary, both in New York. Additionally, her works have been featured at the Tumen Cultural Center in China, Galerie Boehner in Germany, Osaka City Museum, The Fukuoka Prefectural Museum and the Doyusha Gallery all in Japan, The Bronx Museum, the Drawing Center, The Asian American Art Center, Bronx River Art Center and the Queens Museum all in New York, The National Museum of Modern Art and the Seoul Art Cosmos Center in Korea, Taipei City Museum of Art in Taiwan, Le Centre D’Estudis d’Art Contemporari in Spain, the Galeria de Marchi in Italy and the Ulft in the Netherlands. Her works can be found in collections throughout the United States, Korea Japan and Taiwan. Additionally Ms. Kim has had numerous reviews of her work published both nationally and internationally in such publications as the Philadelphia Inquirer, InLiquid, The New York Arts Magazine, the Albuquerque Journal, the Cologner Rundschau, The Korea Times and the Korea Post.

For more information on Hee Sook Kim’s Paradise Between exhibition at Causey Contemporary running from March 10 - April 10, 2016, please contact Lara Aim, the communications associate at the gallery via email: [email protected] or telephone: 212-966-2520