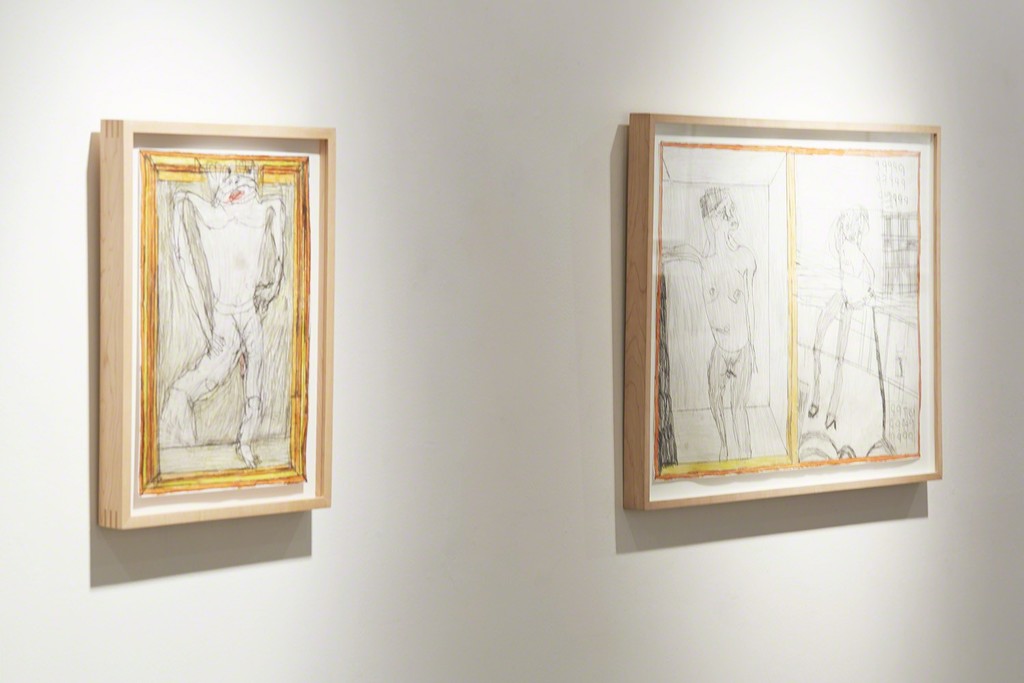 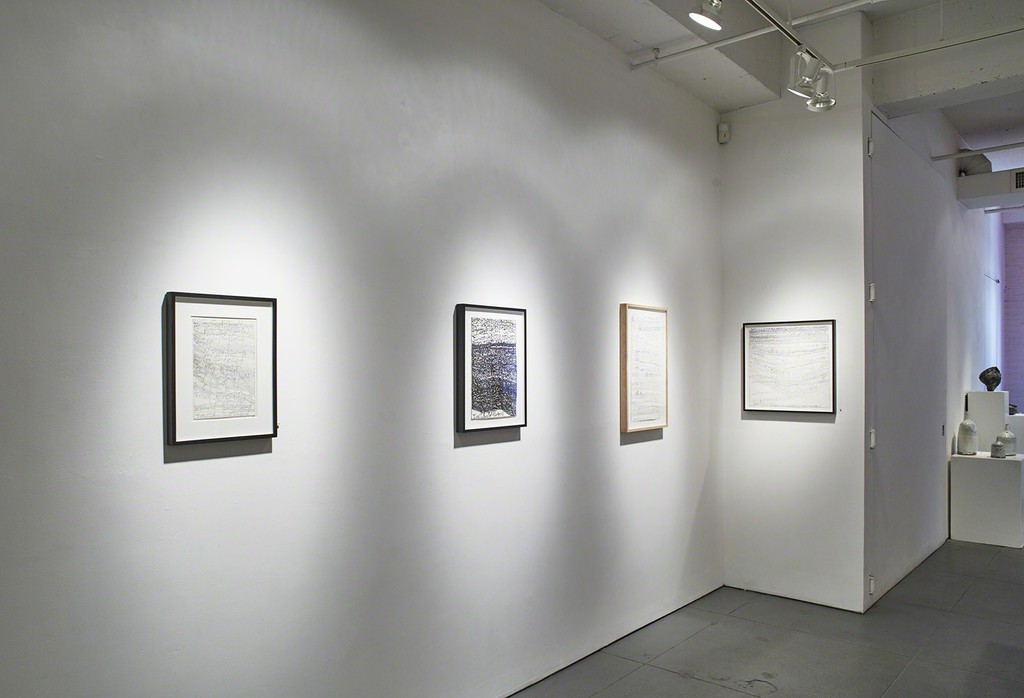 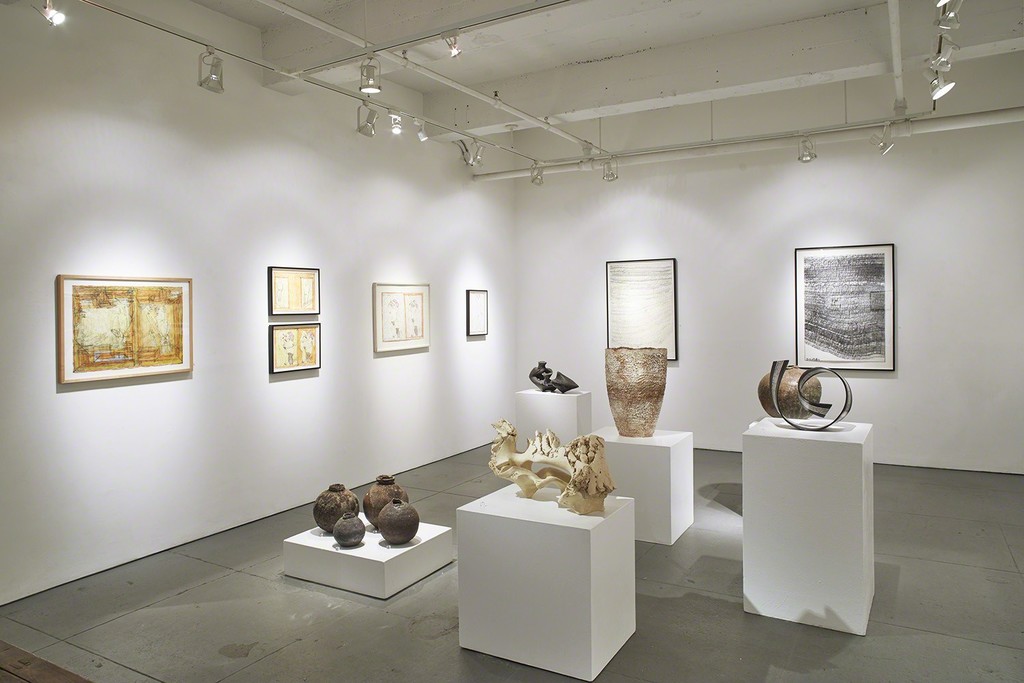 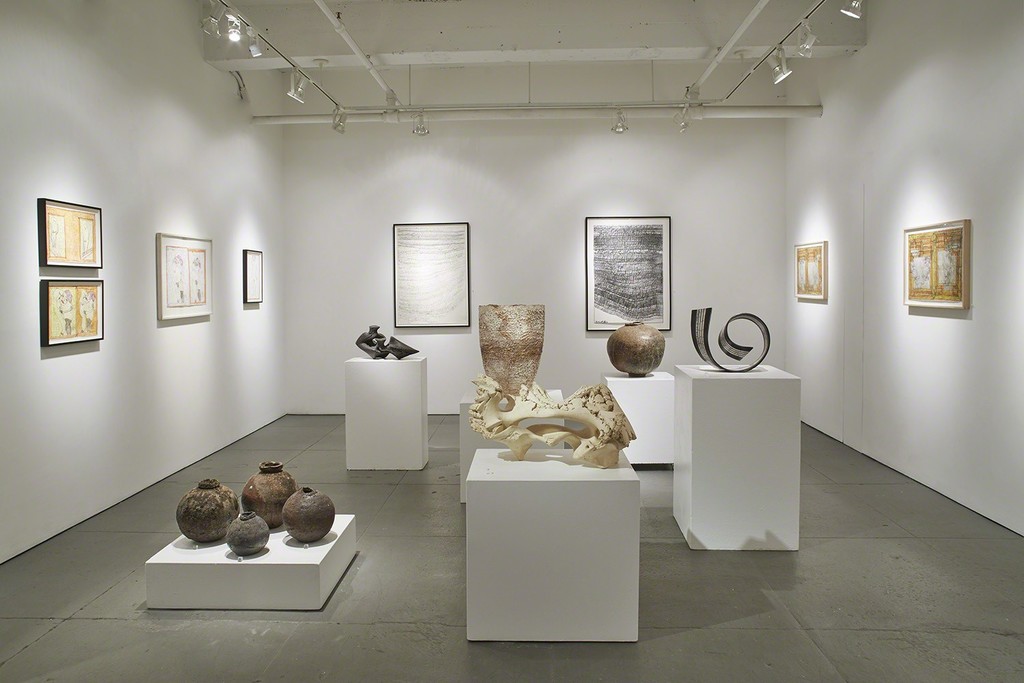 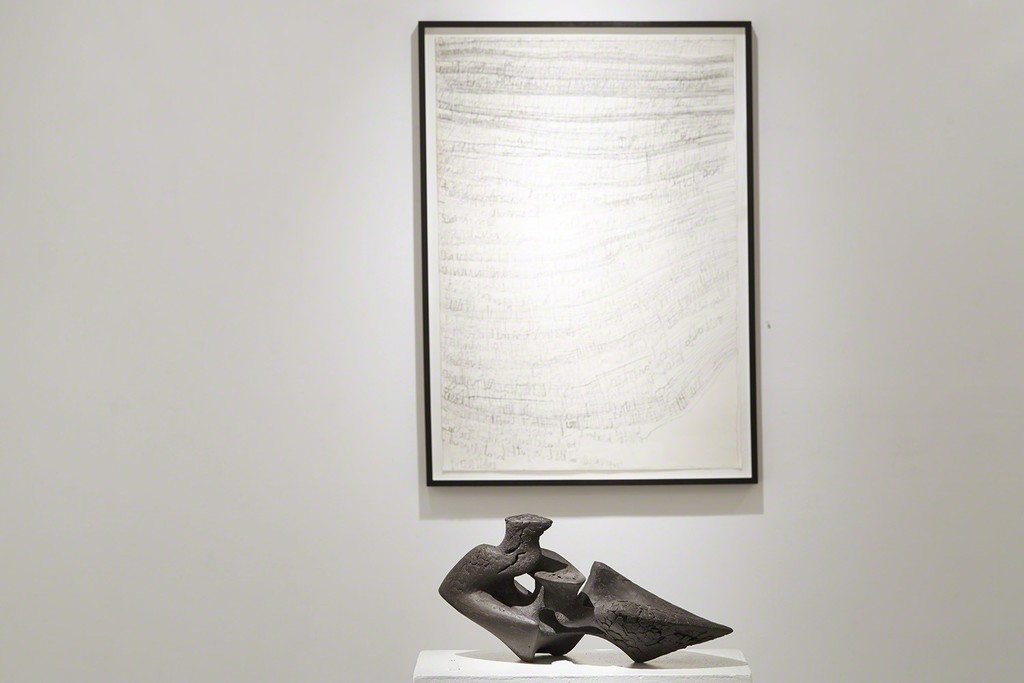 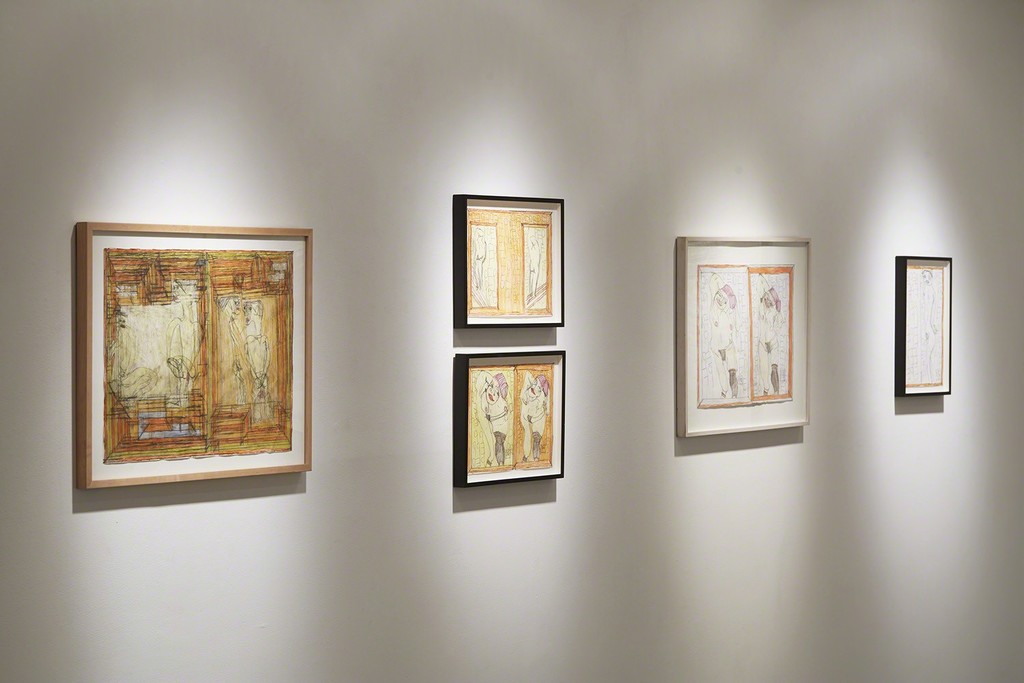 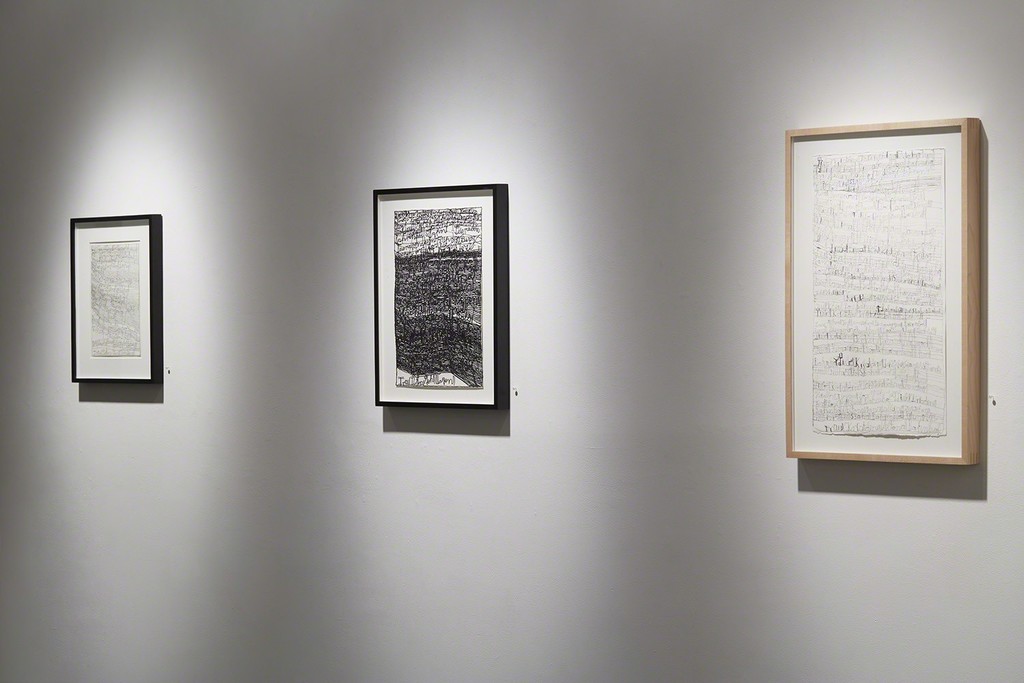 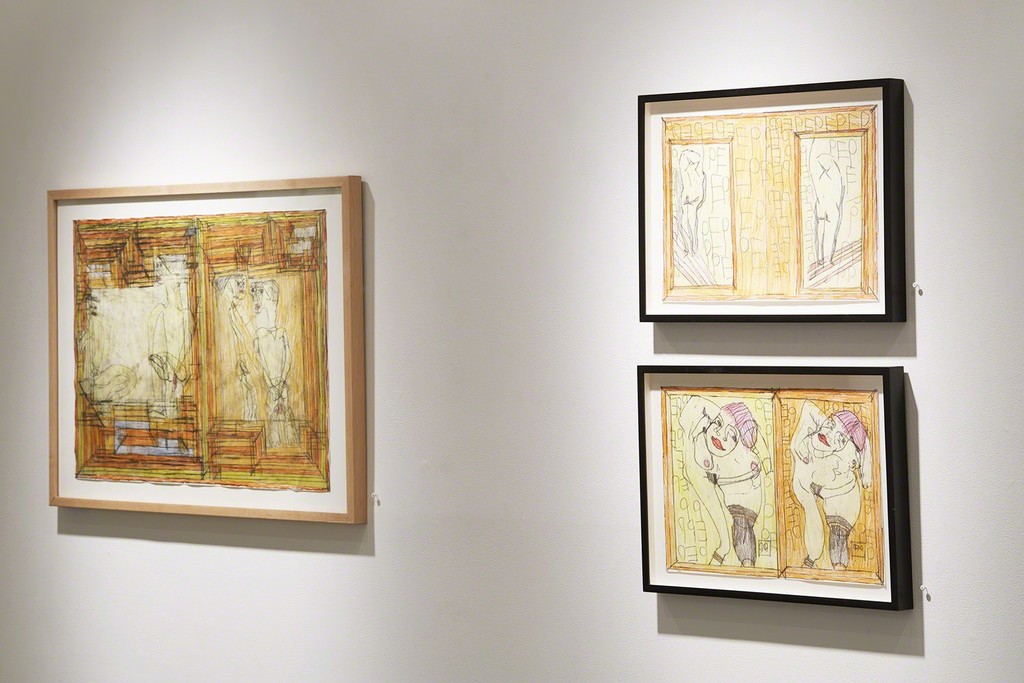 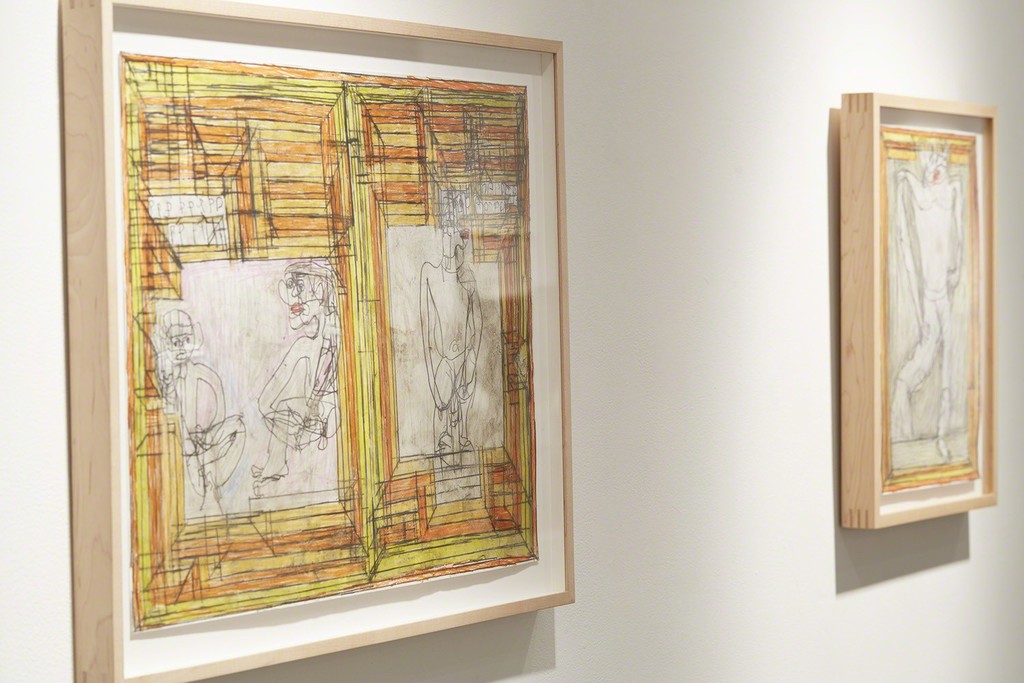 An underlying theme of much Art Brut is the artist's location of self in an often strange or hostile universe. The artist often has an unspoken utilitarian intention for the work, namely the cataloguing of self and immediate environment in order to organize and ensure a rhythm of security in one's world.

Joseph Hofer (b. 1945 Austria) and Harald Stoffers (b. 1961 Germany) are two such artists. Each literally takes the 'sounds of silence' and fleshes them out into descriptions of self-containment (as opposed to confinement). The process of making art to heal oneself often has a transcendent effect as well. Joseph Hofer is deaf and physically handicapped to the point where his mobility is seriously limited. But one day in a shop he found a large mirror and this acquisition completely changed his worldview. With the use of this mirror by his bed he began drawing self-portraits both clothed and nude contained within a drawn frame much like the one around the mirror. Hofer's figures; the self-portraits, and the female nudes inspired by an Egon Schiele book he saw in the facility where he lives, are secure and confident, rather than trapped by their elaborate frames. The emptiness is eliminated, the physicality is immediate, intense, and self-contained.

Harald Stoffers drawings are, conceptually at least, not that different in intention from what Hofer presents, though with a completely different style and process. His epistles in artful cursives are letters to his mother in which he carefully lists the clothing he is wearing on that day and a list of the activities he will be pursuing. He inventories his life to give it a cohesive and meaningful shape. In doing so he creates a miraculous visual from a mundane life. But though the letters are carefully shaped the rhythm of placement is abstracted, asymmetrical and meandering suggesting a possible turbulence under the grace.

Both artists seek to establish a sense of internal and external Place by creating worlds that unfold within and around their own bodies. The act of drawing is a method of controlling survival; in Hofer's case figuratively, and in Stoffer's case by emotionally charging the written words with visual intensity. For both the art becomes a conduit toward a way of balance and self-placement in the world.