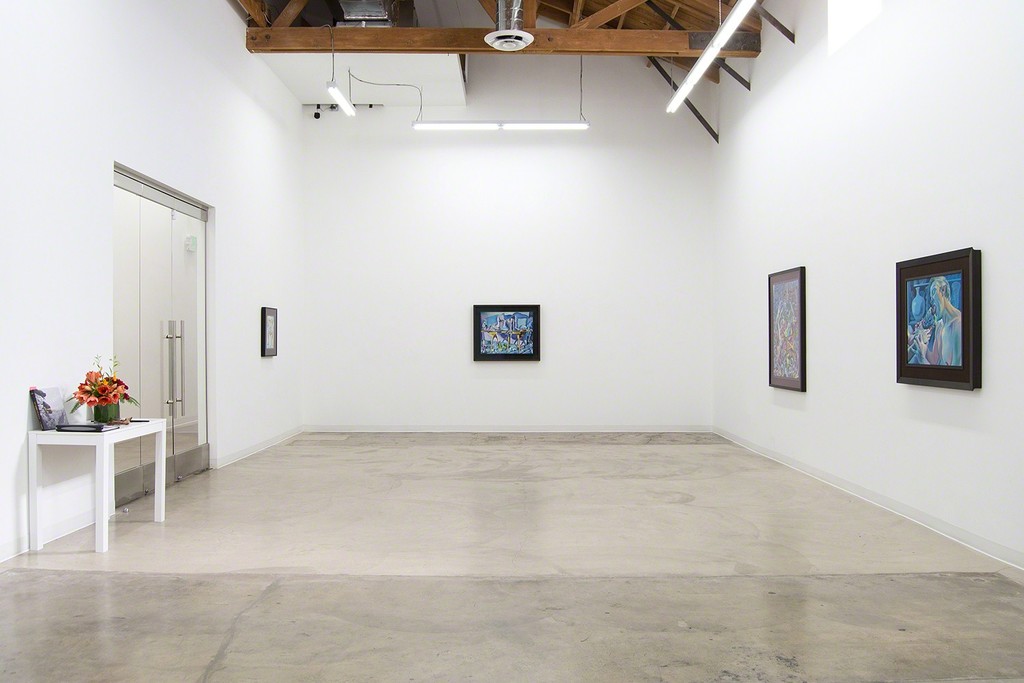 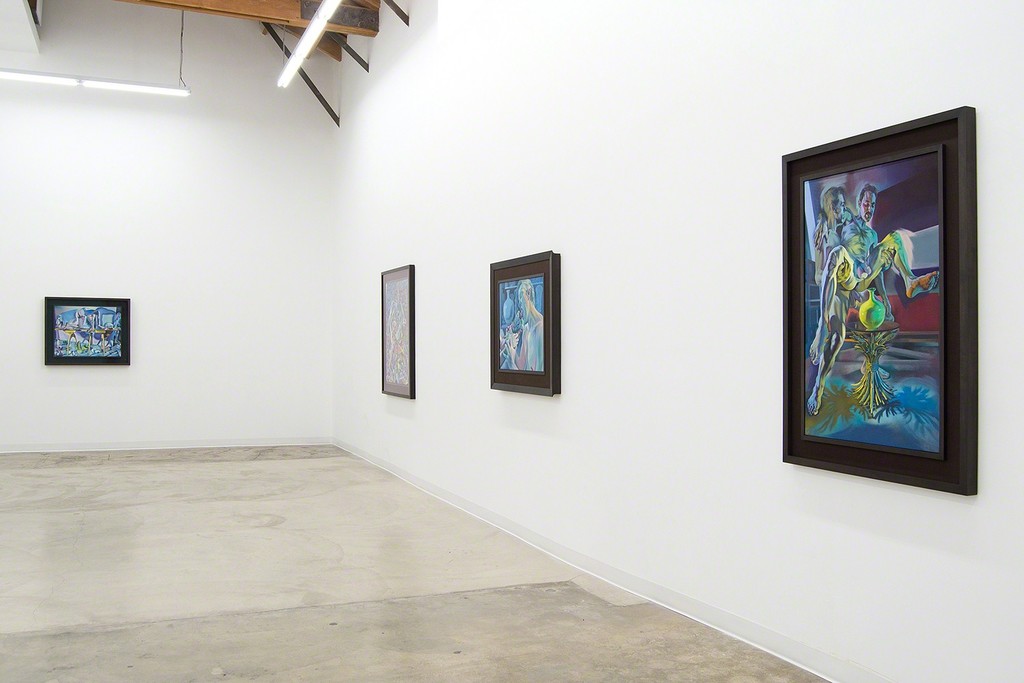 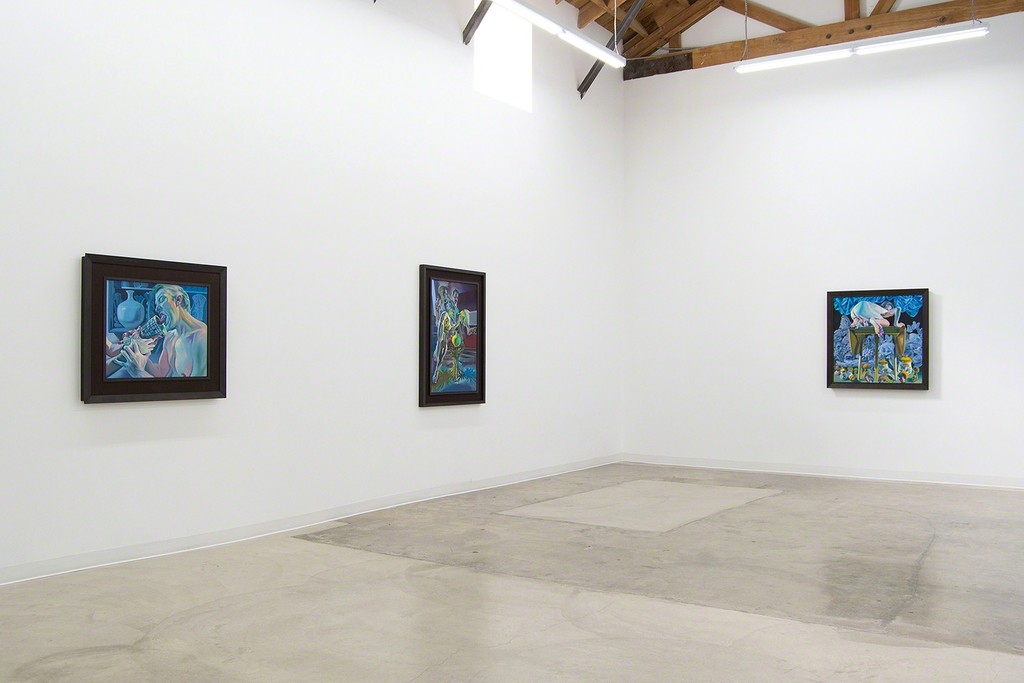 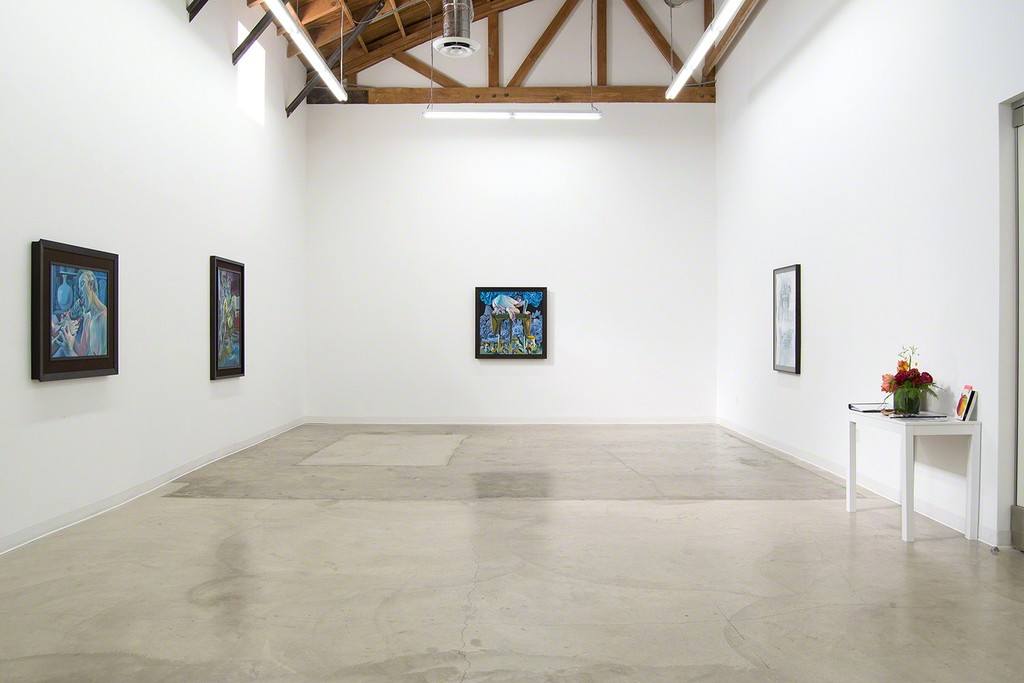 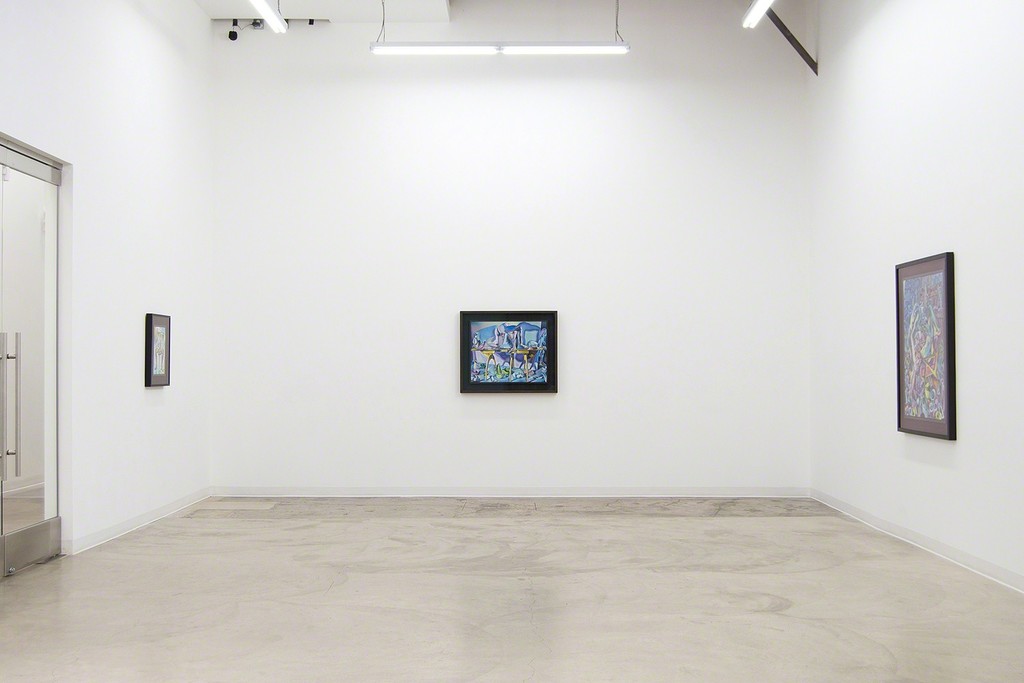 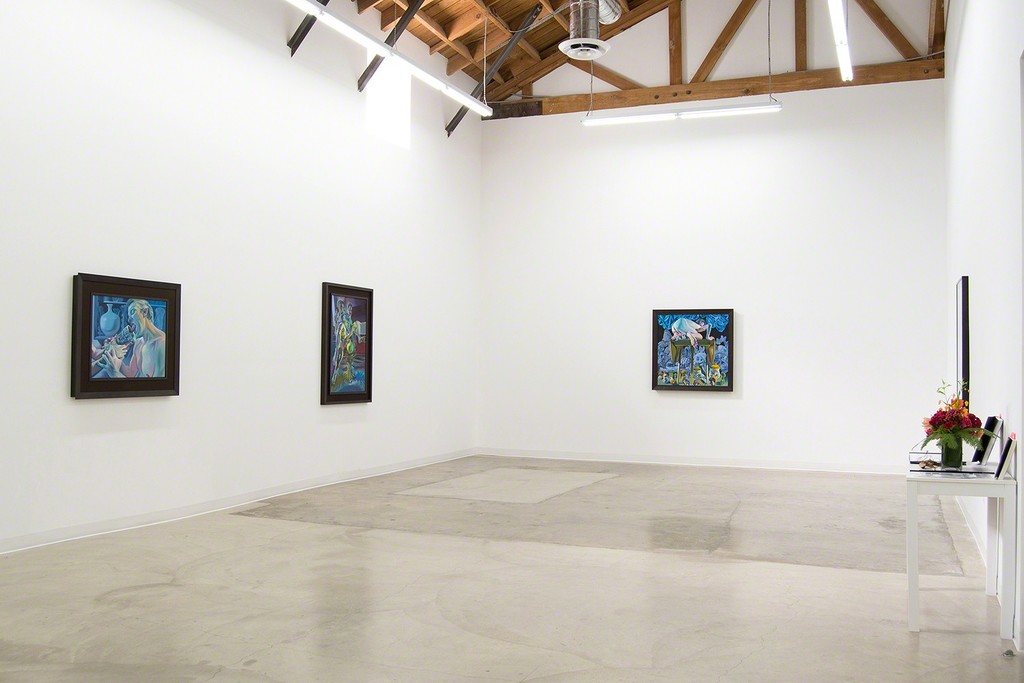 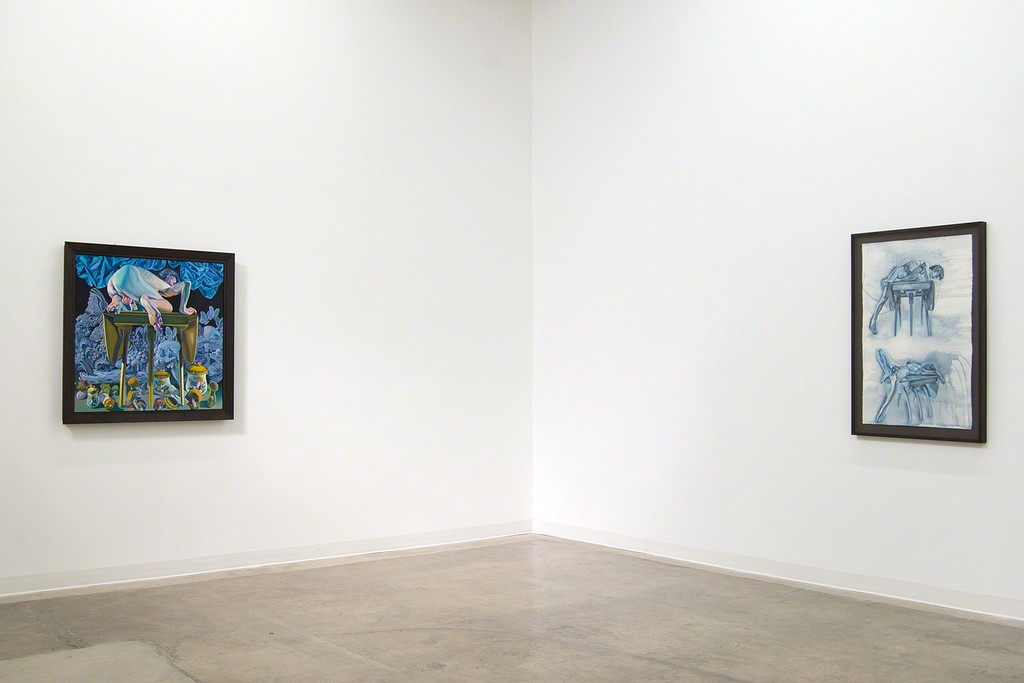 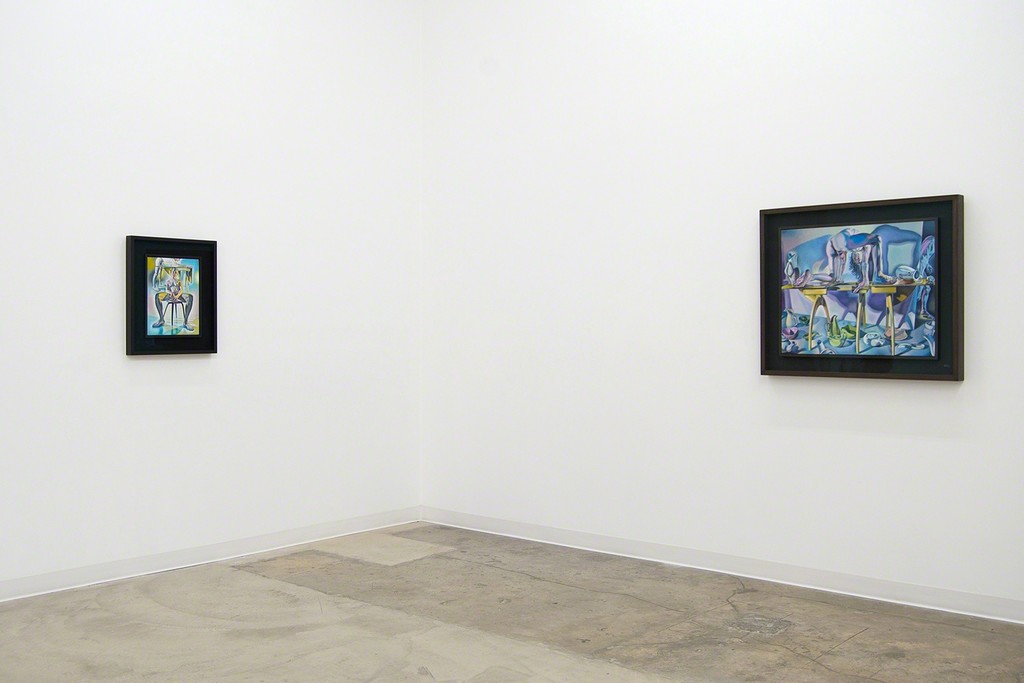 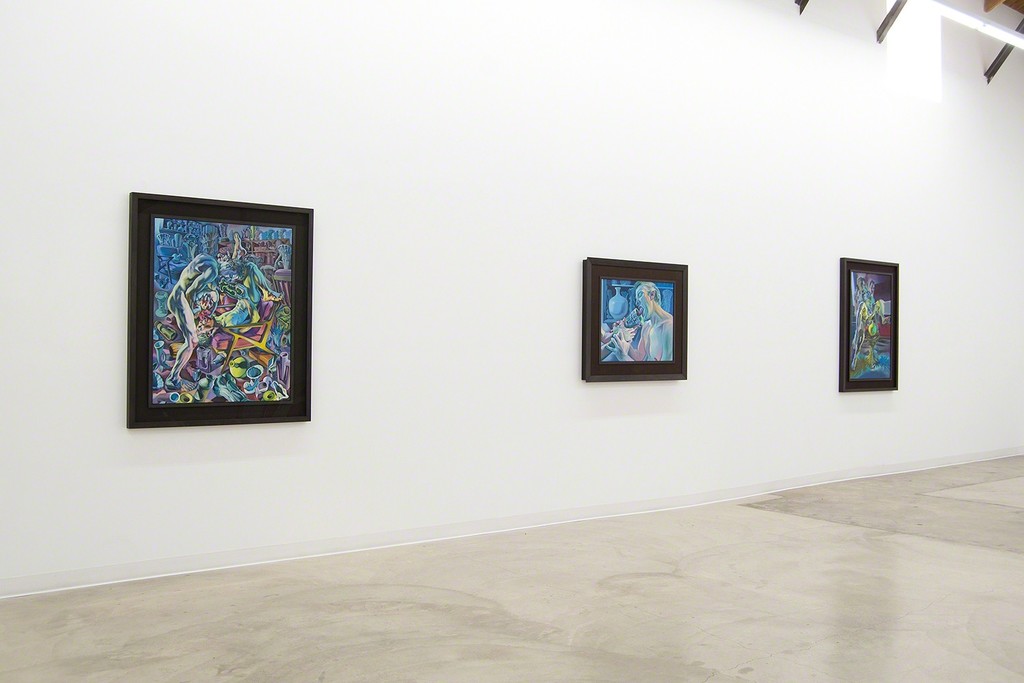 The narratives in Brett Reichman’s work are constructed from things that he owns and collects: mid- century modern furniture and dinnerware. These housewares were originally designed as guides to easier living, bringing modern aesthetics to the traditional home in the 1940ʼs and 50ʼs. Gay men of the artist’s generation have embraced these mid-century design aesthetics, as nostalgia re-imagined to reclaim the American dream. Reichman imagines a gay domestic space not assimilating to normative criteria, even though it is filled with familiar objects from the past.
He constructs images where the rules of domestic life are flipped: for instance a figure is posed on top of the dining table and the dinnerware is arranged on the floor. He also creates a psychological domestic space routinely identified as feminine with masculine motifs: male nudes are coupled with dinnerware suggesting the phallic, rather than traditional “woman as vessel” symbolism.

The staging of sexuality and masculinity are explored through performative situations. Figures are placed in compromising and vulnerable poses, therefore questioning societal norms by constructing images of exaggeration and artifice. The objects and figures in Reichman’s work contain large elements of artifice and camp sensibility, a vision of the world in terms of style and of things being not what they appear to be.

Many compositions place male figures foreshortened on wooden structures, albeit in the form of highly designed furniture. Through these juxtapositions, the artist contemporizes religious painting motifs of the crucifixion and recalls the sexual subtexts found in renaissance era iconography.

Works are primarily rendered in egg tempera through crosshatching. The crosshatch ironically builds up the image while simultaneously negating it. This opposition refers to the contradictions within the imagery itself: representative of satisfaction and dissatisfaction, fulfillment and insatiability. The crosshatch creates an image stroke by stroke, further implicating the subtexts of obsessiveness, eroticism, and the hard fought, hard won achievements exemplified through personal and political struggle.

Born in Pittsburgh PA, Brett Reichman has lived and worked in San Francisco since 1984. His work came to fruition in the late 1980s out of cultural activism that addressed the AIDS epidemic and gay identity politics and was curated into early exhibitions that acknowledged those formative issues. He has been the subject of numerous solo exhibitions at Gallery Paule Anglim in San Francisco, the PPOW Gallery in New York, Feature Inc., NY, the Rena Bransten Gallery in San Francisco, and the Orange County Museum of Art. His work is currently featured in the survey exhibition Art AIDS America at the Tacoma Museum of Art. Reichman’s work is in many public collections, including the San Francisco Museum of Modern Art, the Berkeley Art Museum, the Portland Art Museum, and the Orange County Museum. Brett Reichman received his BFA from Carnegie Mellon University and MFA from the University of California, Berkeley. He is Associate Professor at the San Francisco Art Institute.