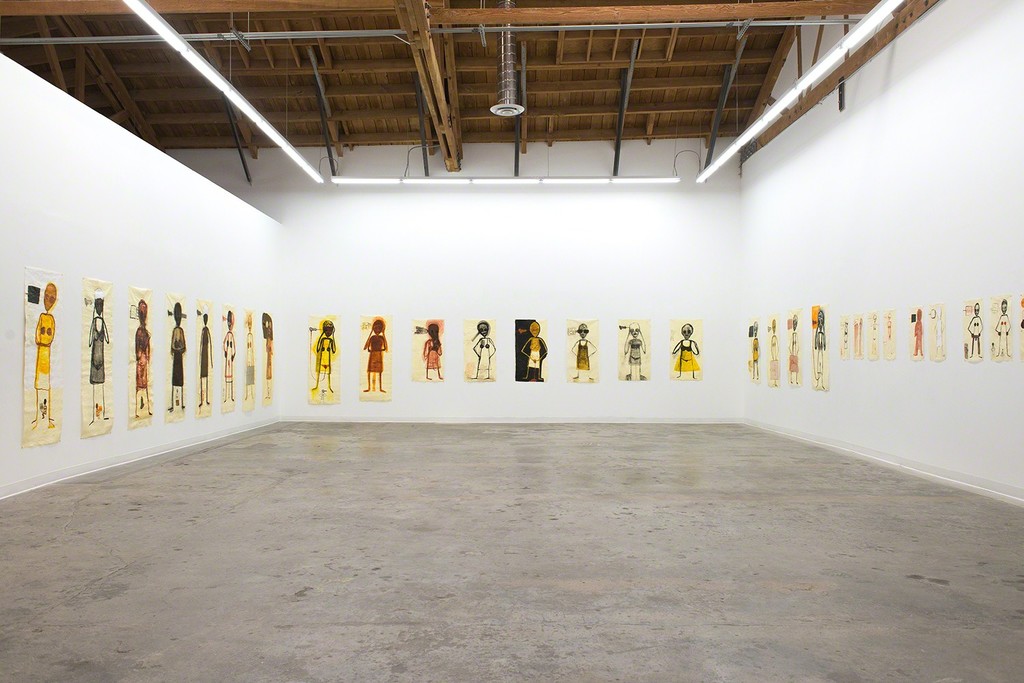 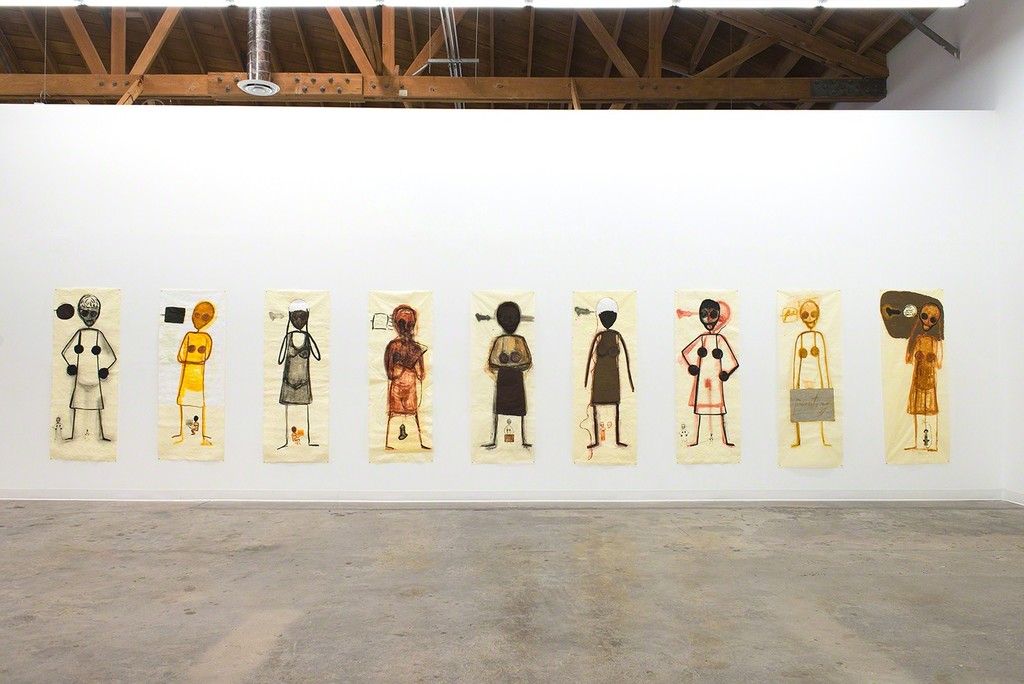 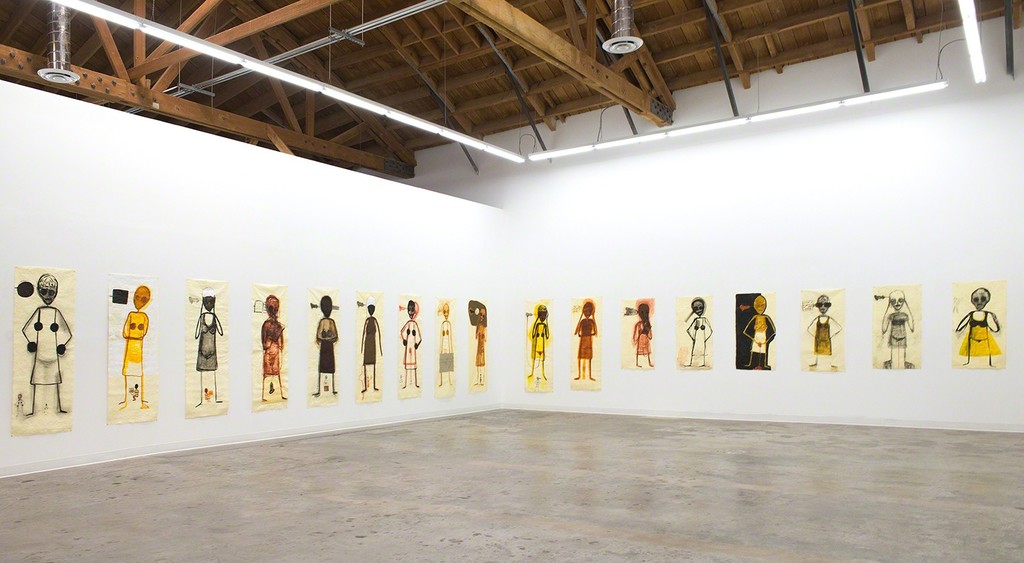 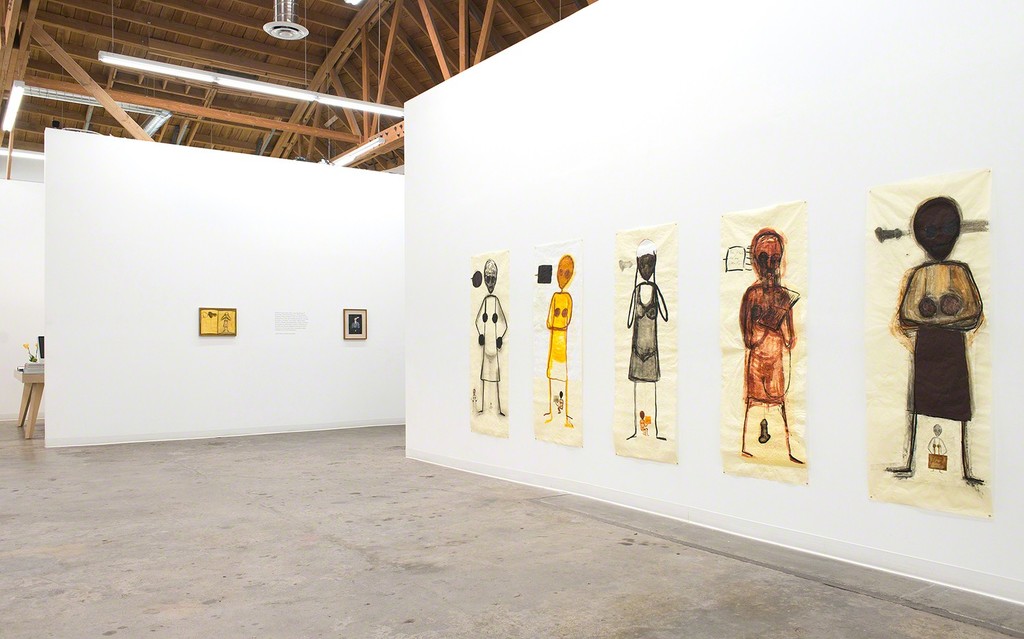 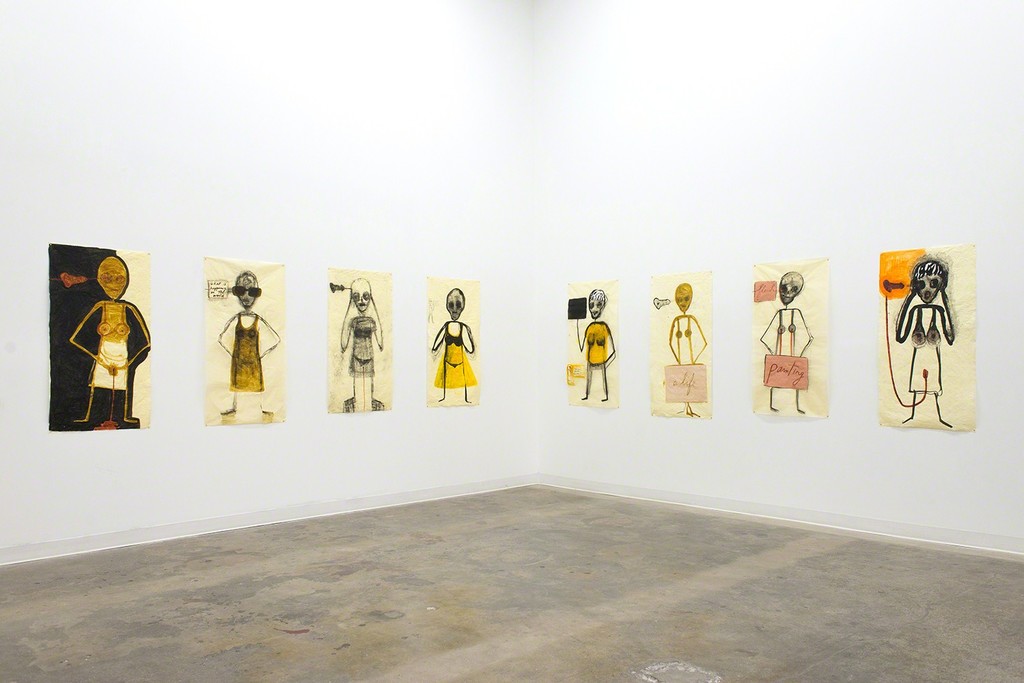 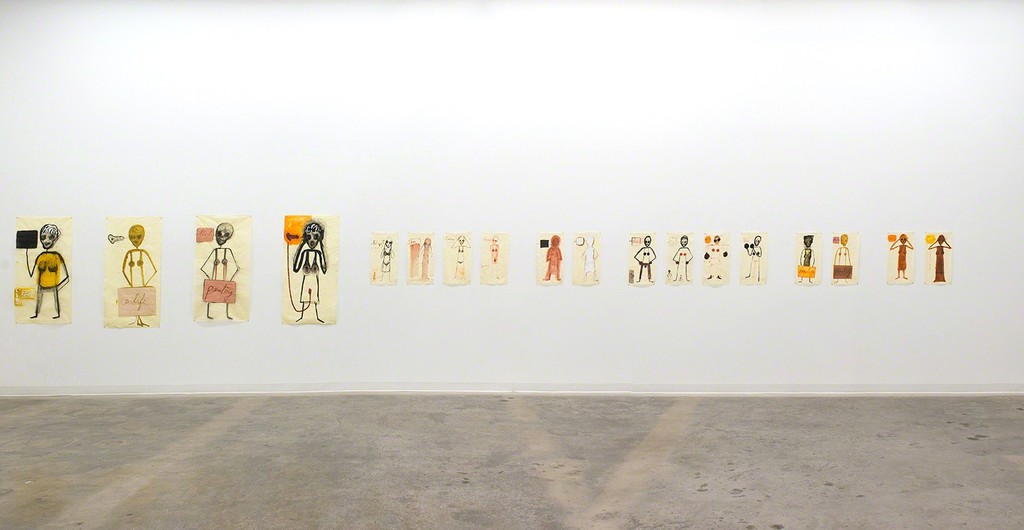 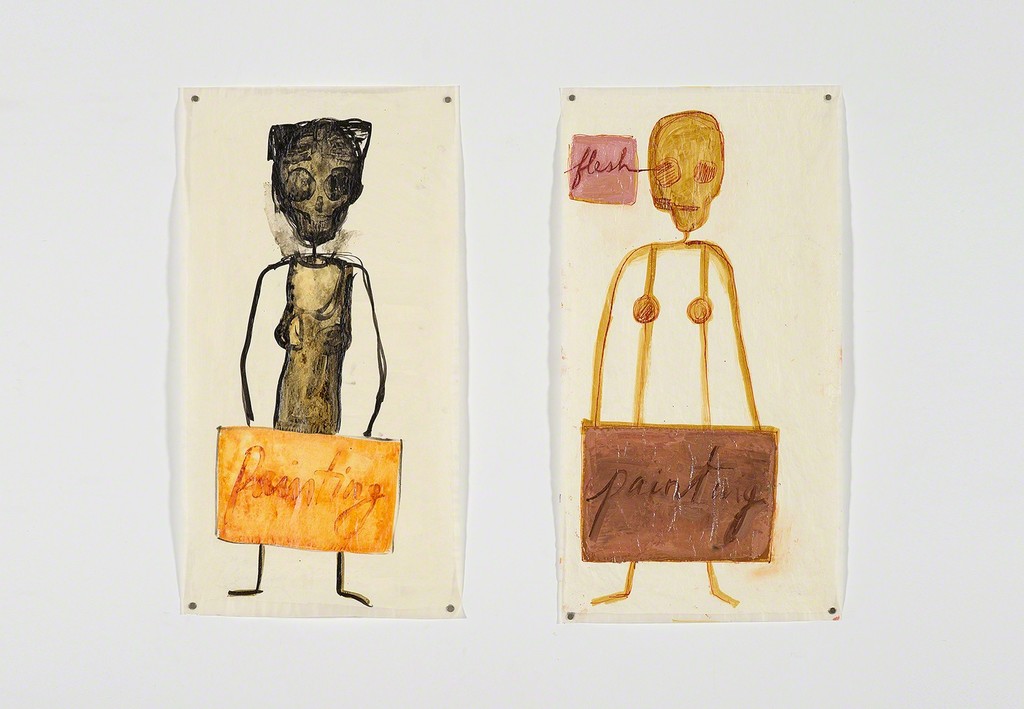 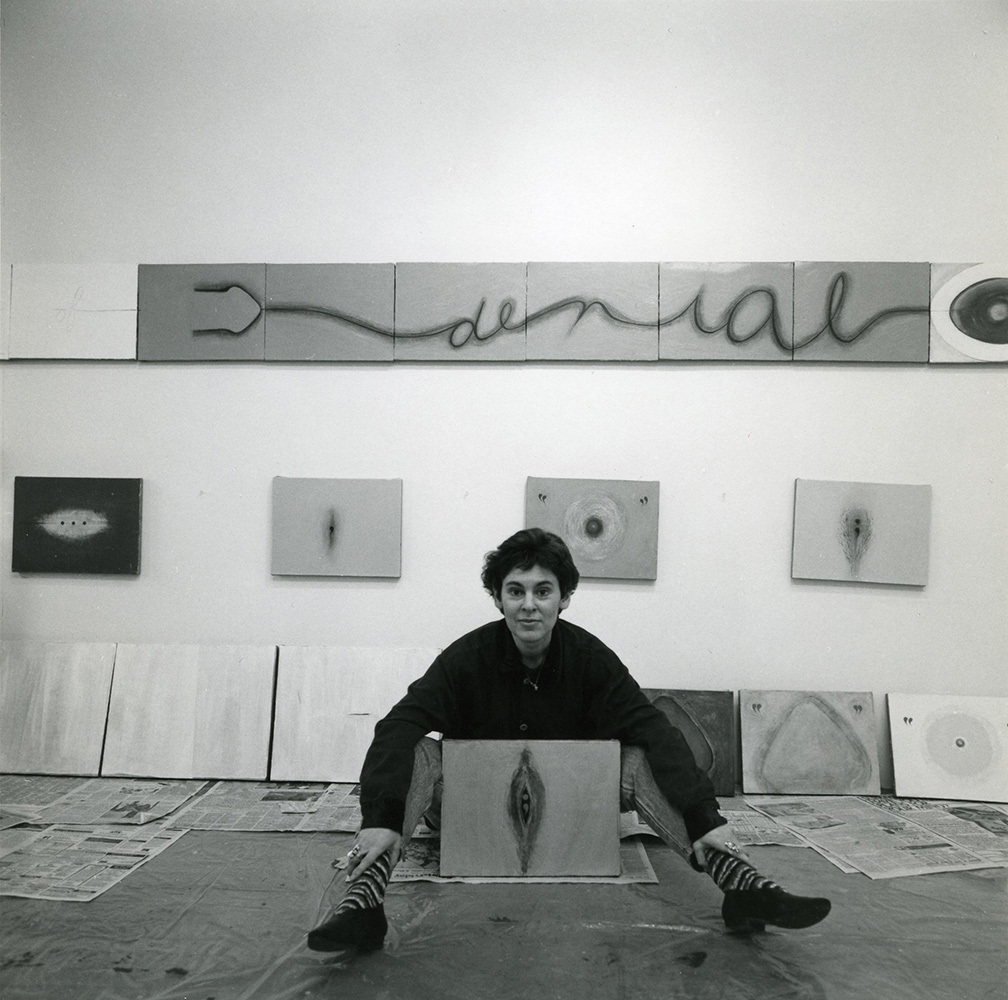 Mira Schor with "War Frieze XII Area of Denial-Egg" in her studio at the Marie Walsh Sharpe Foundation in 1993. (Photo by Sarah Wells) 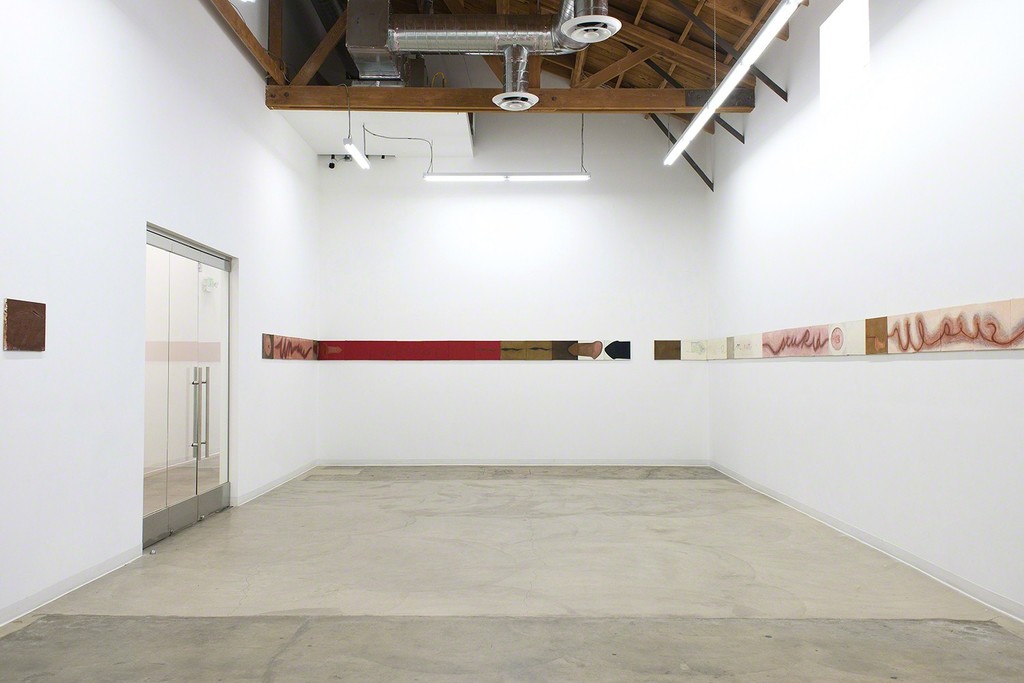 CB1 Gallery is proud to announce Mira Schor’s upcoming solo exhibition "War Frieze," opening September 10, 2016. This will be the most comprehensive presentation of a major multi- canvas painting installation on the theme of militarism and aggression, conceived and begun by the artist in the immediate aftermath of the First Gulf War in the winter of 1991 and completed in 1994. The total work is over 200 running feet long and has never been seen in its entirety, either publicly or by the artist. CB1 Gallery will present the second half of this major work, at once historic yet with continued resonance in the present day.

In her work from the 1970s to the present, Schor has insisted on the joining of language—discursive, narrative, theoretical and political—with the materiality of paint, marking a unique path in a highly contested territory of visual art. "War Frieze" is exemplary of her practice. It is also a work which has only been seen in fragments and has yet to be fully understood in its role within a specific critical and historical context, a critical lacunae that we hope this exhibition will redress, expanding the dialogue around the work of an important, unique, yet under-recognized artist.

In "War Frieze," the transmission of power in society is represented by the flow of language as body fluid from sexual body part to body part—language embedded into the body of oil paint. The language is public, appropriated from the news, including such phrases as “Area of Denial”–a class of weapon aimed at denying the viability of territory for any living beings. Schor focused on this term because of its multiple meanings and applicability including not only its meaning in warfare, but also the body of painting as an area of denial within postmodernism, the body of woman as an area of denial within patriarchal culture: other phrases and words anchoring the work were suggested by the Clarence Thomas hearings and by the wording of still in play Supreme Court decisions on abortion, including “pub(l)ic” and “Undue Burden.”

In an interview published in conjunction with an exhibition at Horodner Romley Gallery in NYC in 1993, Schor spoke about War Frieze,

"I started "War Frieze" right after the Gulf War. I wanted to make an endless painting, about completely circular militarism and aggressivity. It is a continuation of works in which I represented the transmission of power in society through the transmission of fluids from sexual body part to body part. In "War Frieze" the fluids became discursive script: sometimes the language, spelling out “area of denial,” or “undue burden” (from the wording of the Supreme Court’s Webster ruling on abortion limits) is blood streaming through scrapped flesh, or milk streaking across barely stained linen. Paint is body-like anyway, it can be messy or fluid, it imparts these bodily traits to the language. "War Frieze" is a work in progress which has evolved into nearly 200’ of discrete segments of from 1’x8’ to 1x25’. One segment, Pub(l)ic hair, speaks to the Clarence Thomas/Anita Hill hearings and Duchamp’s Fountain. Another spells out “It’s Modernism, Stupid,” inspired by the Clinton campaign motto, “It’s the economy, stupid.” My favorite panel is the red comma. It looks very graphic on a slide, but is in fact very painterly. That led to painting incarnated punctuation marks: cunts, breasts, penises framed by quote marks; red commas and semi-colons set into public hair, embedded in flesh. Markers of printed language are sexualized, and text, which had been so dominant over visuality in feminist theory and art in the 80s, is presented for its visual seductivity and bodily contingency."

In response to her own historical work, Schor will also exhibit a new series of works on paper, collectively titled "“Power” Frieze." These drawings feature a new articulation of Schor’s interest in the intersection of political language and private embodiment exemplified by the imagery of "War Frieze," now in the form of a phalanx of individual figures, drawn and painted in ink and oil on skin-like tracing paper, addressing the fragility and the resolution of the mortal body as the artist continues painting and writing in the face of toxic masculinity and looming fascism, a continuation of the endless militarism and aggression that was the underlying subject of "War Frieze."

Of these recent works, artist and critic Bradley Rubenstein has written, “Schor’s paintings, dark, compactly strong meditations on mortality, power, and language, show an artist wrestling with the big questions. Schor has always been a painter who confronted politics, art history, and painting head-on, and these new paintings don’t veer far from that course….Schor understands the vocabulary of the millennial generation, yet her work suggests that there are traditions in painting that are slowly being degraded or forgotten—lost knowledge coming at great expense to our shared cultural understanding. Schor’s drawings are meditations on time and aging, and on the power of art to transform and transcend the temporal.” Novelist and critic Will Heinrich wrote of Schor’s "“Power” Figures," “By stripping the husk from self-image … what Schor reveals is its mysteriously contradictory truth: the anger, frustration, and insecurity that underlie an extravagantly self- deprecating joke like a skeleton with breasts, but also the absurdity that underlies them; the bitter pinch of decay underlying creation, and vice versa; and, especially, the unresolvable tussle between roles that are socially imposed and those that emerge from within.”

Mira Schor is a New York-based artist and writer. Her work has been included in exhibitions at the Jewish Museum in New York City, The Hammer Museum, P.S.1, the Neuberger Museum, and the Aldrich Museum. Interviews with Schor have appeared on Art21Blog, Bomblog, Hyperallergic, Artinfo and Culture Catch. She participated in ARTspace’s Annual Distinguished Artists’ Interviews at the 2013 Annual College Art Association Conference in New York. She is the author of "A Decade of Negative Thinking: Essays on Art, Politics, and Daily Life" (2009), "Wet: On Painting, Feminism, and Art Culture" (1997; both Duke University Press), and of the blog "A Year of Positive Thinking." She is the co-editor of "M/E/A/N/I/N/G" Online and recent writings have appeared in Artforum and The Brooklyn Rail. Schor is the recipient of many prestigious awards including a Guggenheim Fellowship in Painting, a Pollock Krasner Grant, the College Art Association’s Frank Jewett Mather Award in Art Criticism, and the Creative Capital / Warhol Foundation Arts Writers Grant. She is an Associate Teaching Professor in Fine Arts at Parsons The New School for Design. Schor’s recent exhibition of paintings and works on paper at Lyles & King Gallery in New York City, Death Is A Conceptual Artist, was an Artforum Critics’ Pick, and received stellar reviews on Hyperallergic and Artslant; the exhibition was featured on Contemporary Art Daily.