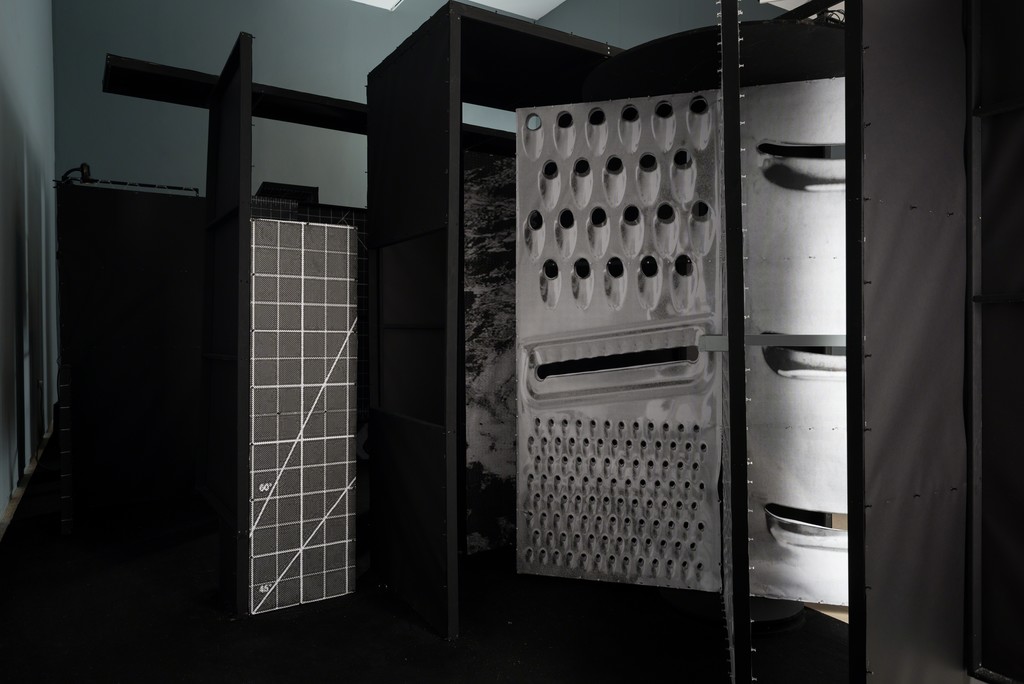 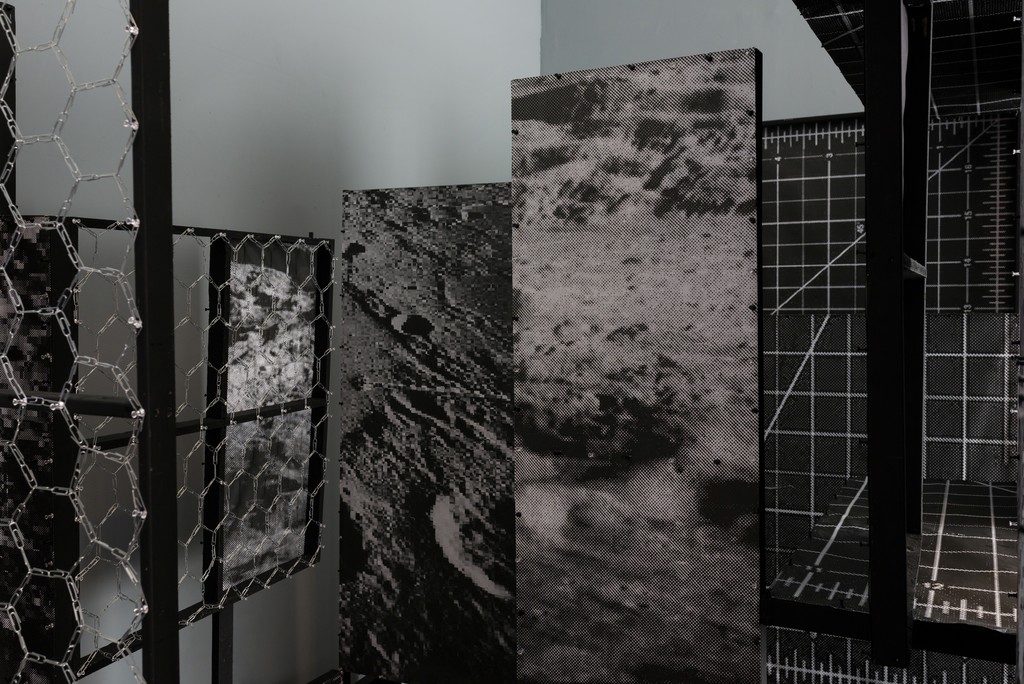 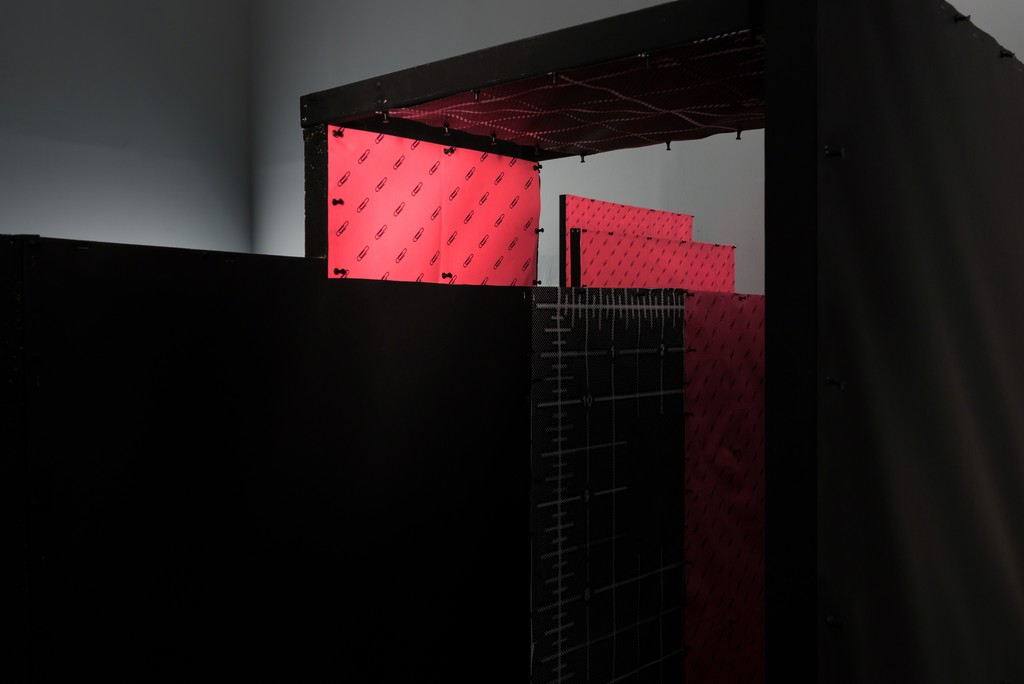 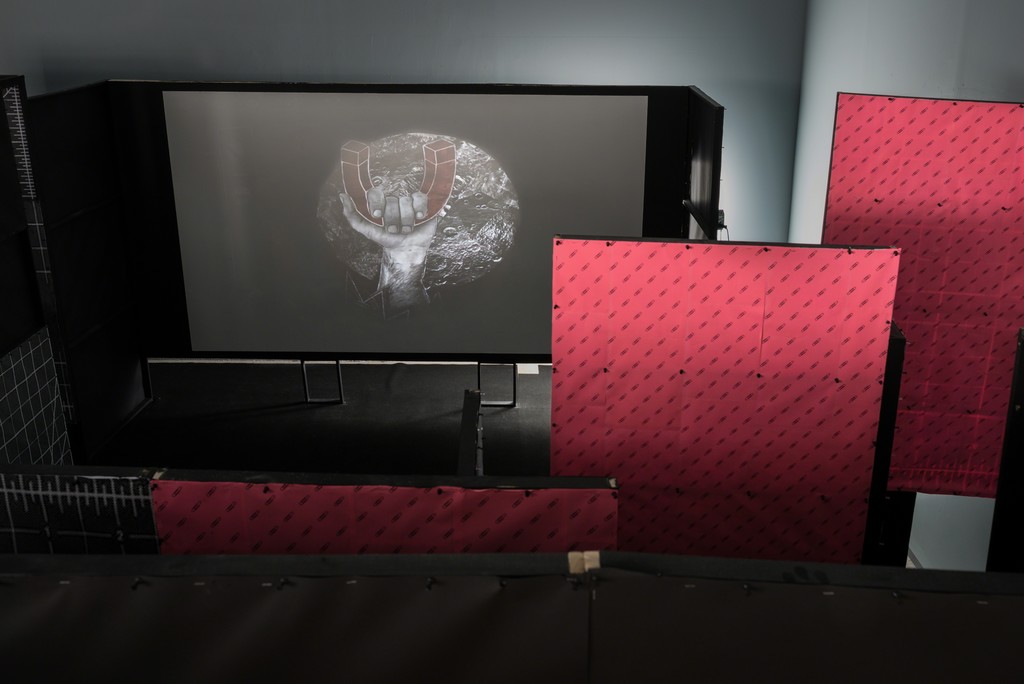 To reach Deville Cohen’s Zero, viewers navigate through a dark labyrinth of paper screens and photocopies, passing through a rotating door shaped like a cheese grater. The doorway leads to a video that depicts a world unto itself, complete with its own internal logic, even though it resists making sense. Zero is inspired by television crime dramas such as The X-Files, but instead of trying to solve a supernatural murder or abduction, it investigates the slippage between something and its representation. A crime scene unfolds at a soccer match, with chickens as athletes and soccer balls that double as eggs. An hourglass and a tape measure, representing time and space, set out to solve the “crime” committed by green rubber “sticky hands,” which stand in for the forces of nature. Even the earth and the moon, or at least sculptural maquettes of them, dance around each other in a gravitational pull that regulates time and space. In the end, the green hands turn the soccer eggs into a primordial ooze, the progenitor of life itself, the ultimate symbol of creation.

All the while, a parallel story of a lover’s quarrel plays out. Taken from a one-act play by Tennessee Williams called The Pink Bedroom, this narrative thread comes to highlight the “constructedness” of the other story lines, and by extension, of all representation itself. The Pink Bedroom shares with the soccer ball/egg story the use of color as a narrative element and the hand as both a tool and as a character. Indeed, in all of his work, Cohen manipulates material to simultaneously act as props, characters, and images. His own body becomes part of the set, photocopies stand in for objects, and space and scale become subject to their own rules. Even narrative is challenged by the television news theme melodies and cheap sound effects that elicit a response from viewers when the story itself is disjunct and fragmented. The only “glue” to the story is the repetition of shapes and objects: the earth and moon, the soccer ball/egg, that all suggest the video’s title, Zero. Together, they create a story that is at once about the creation of the solar system and the universe, the existential philosophy of the chicken-and-egg, and the concept of “zero,” nothingness.

Cohen challenges the very systems in place that tell us stories. He doesn’t only confound narrative, he tests representation itself. Zero, the presumed sum of nature’s equations featured in the video, is itself a semantic riddle: a representation of nothing. But can nothing actually exist, if it’s represented? Can nothingness, the lack of content, take a form?