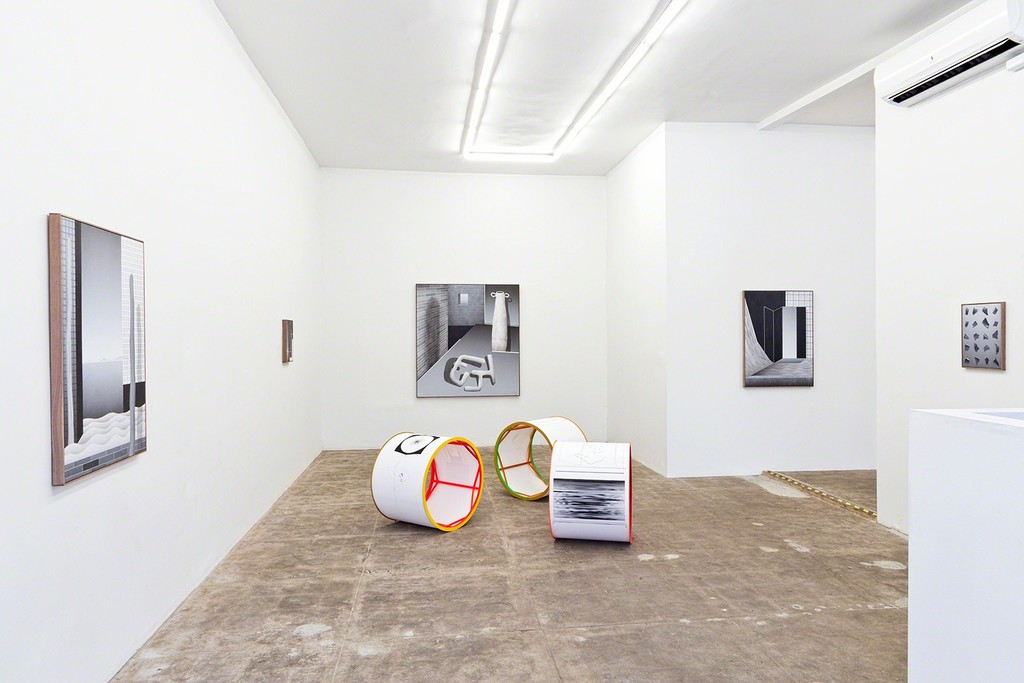 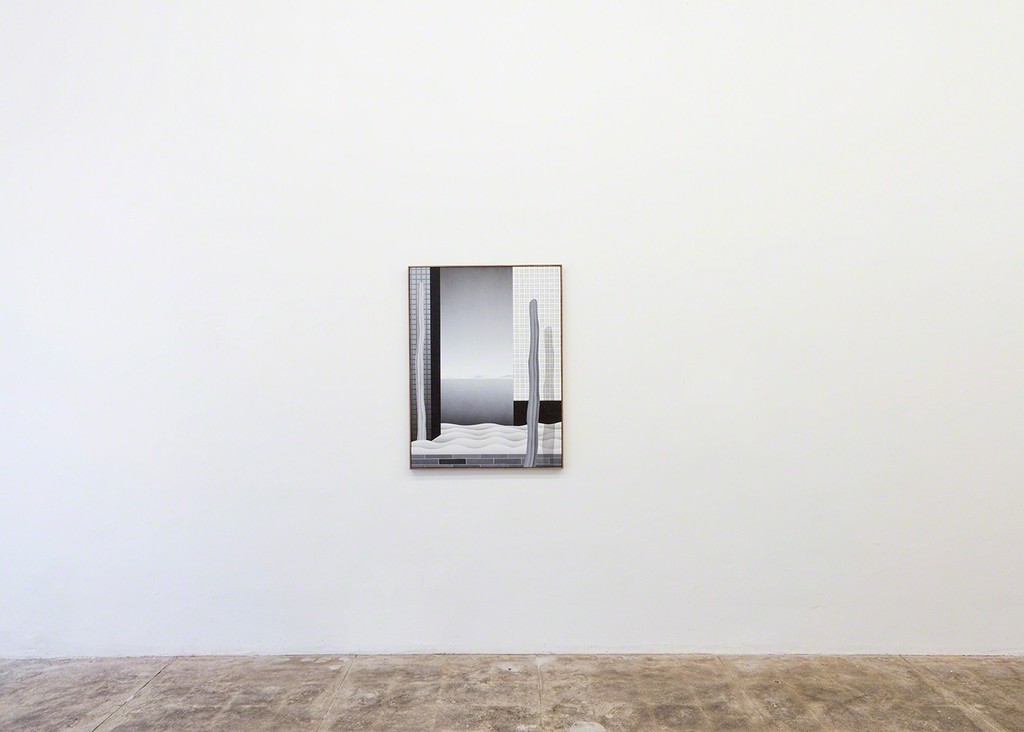 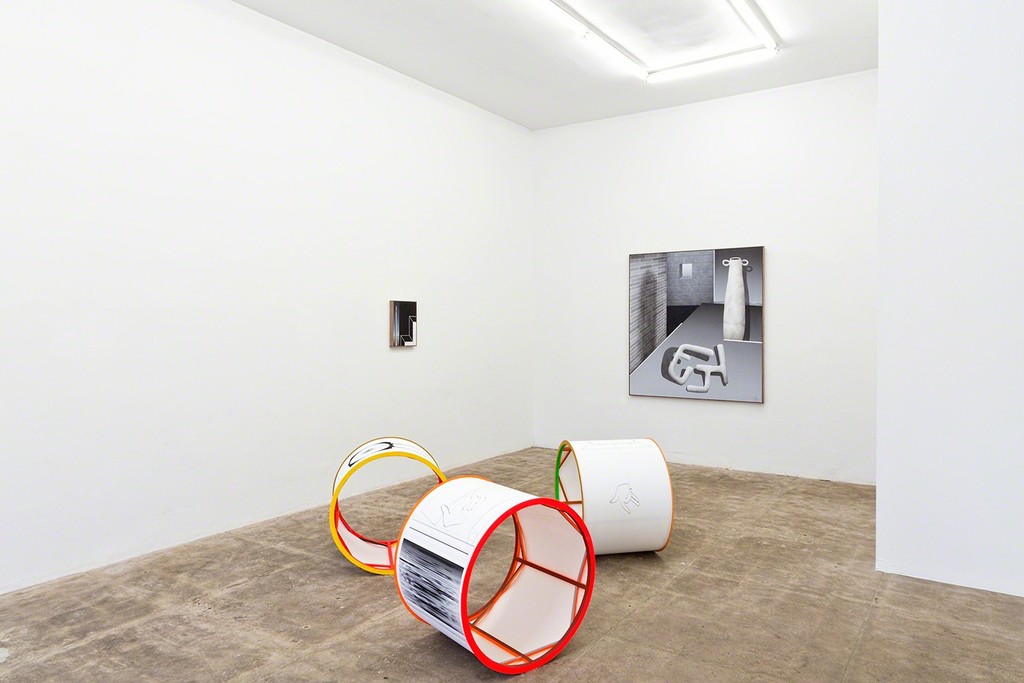 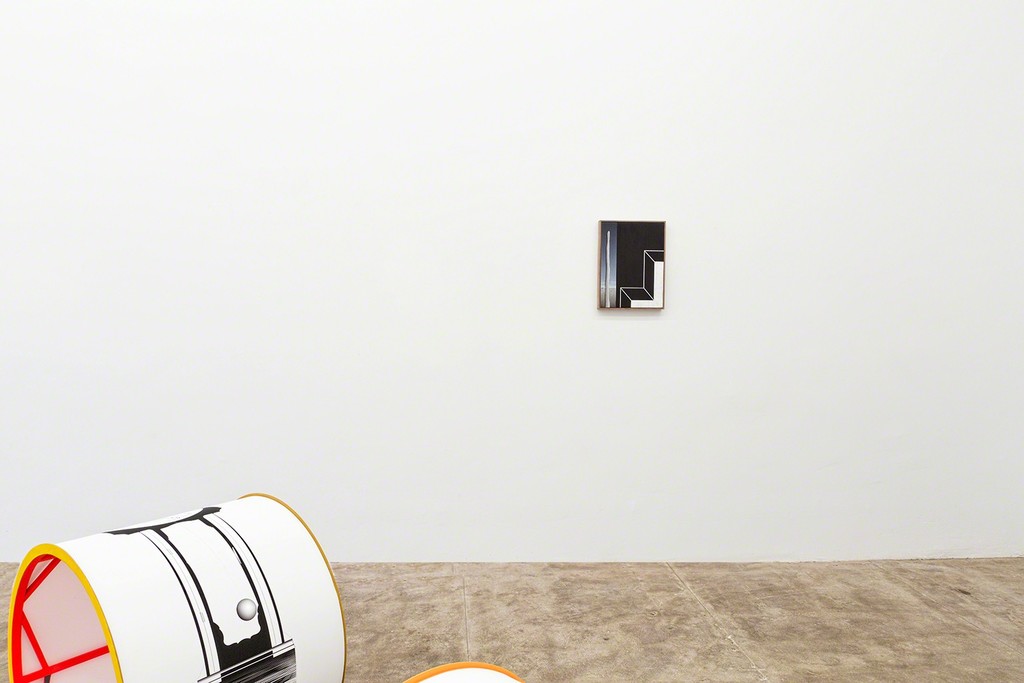 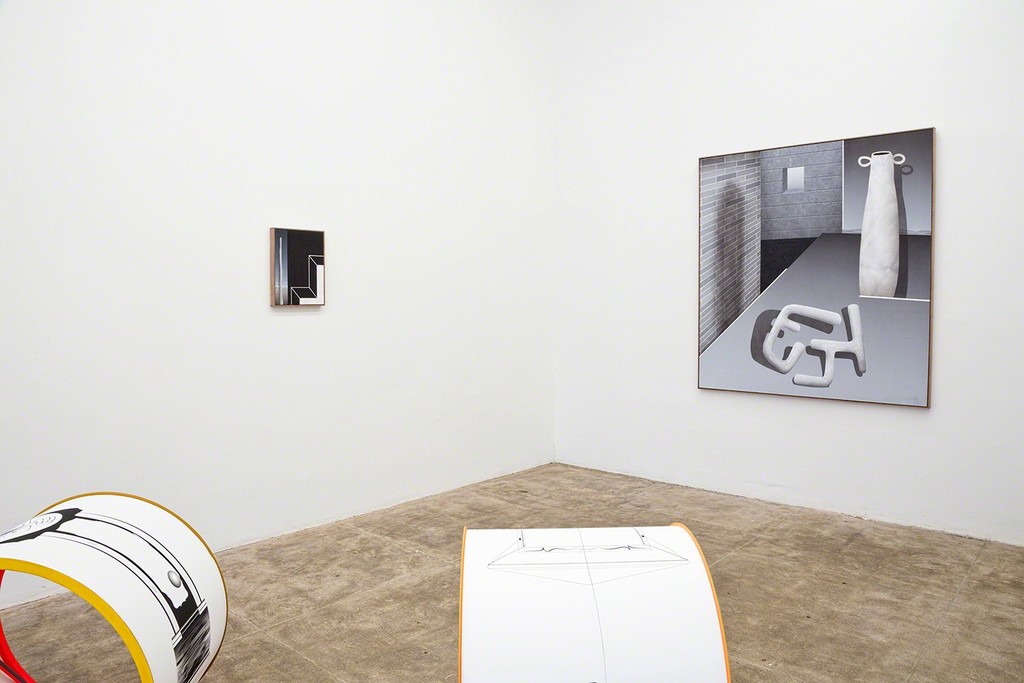 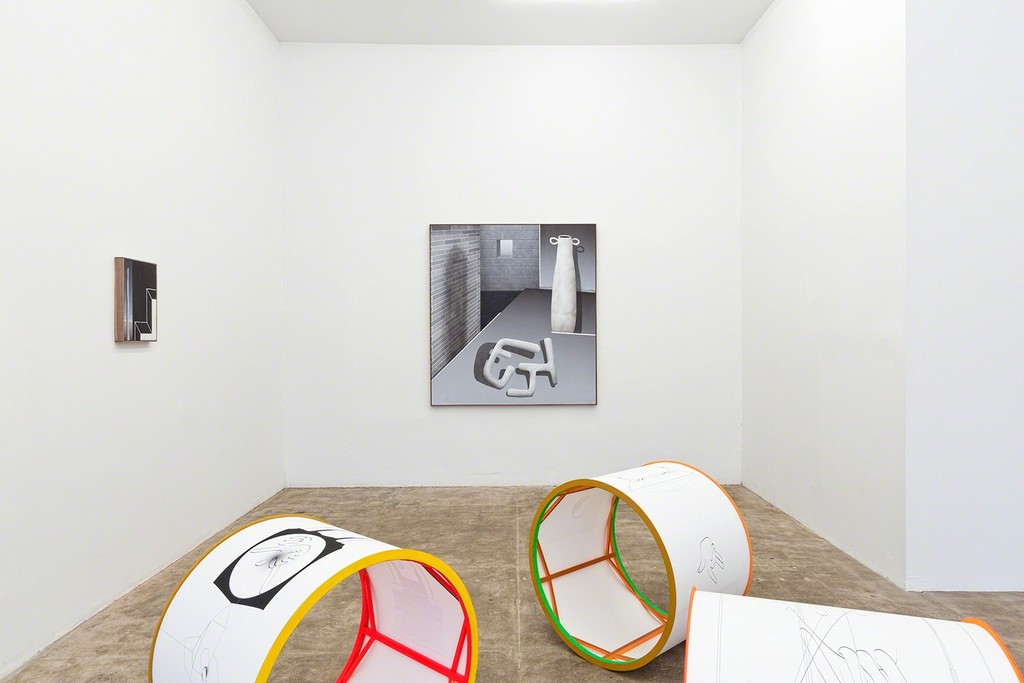 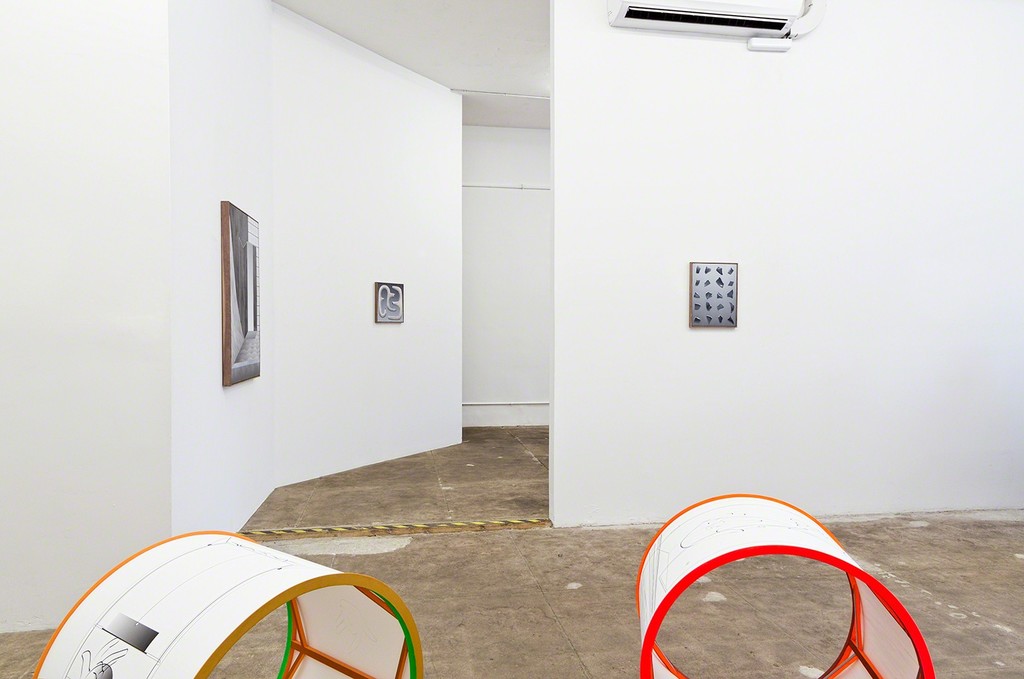 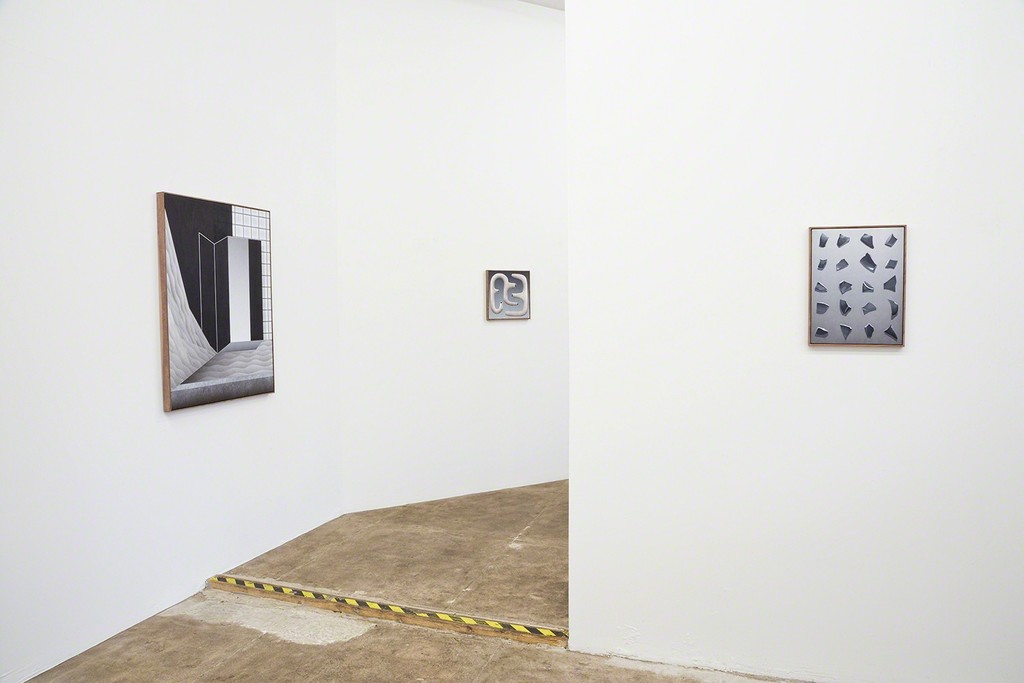 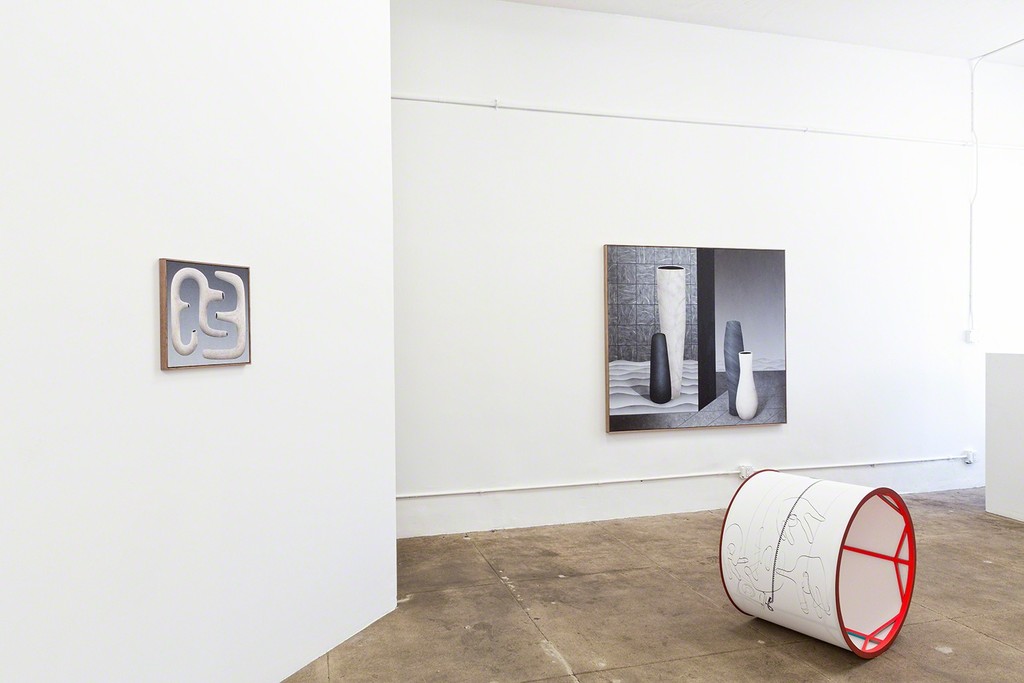 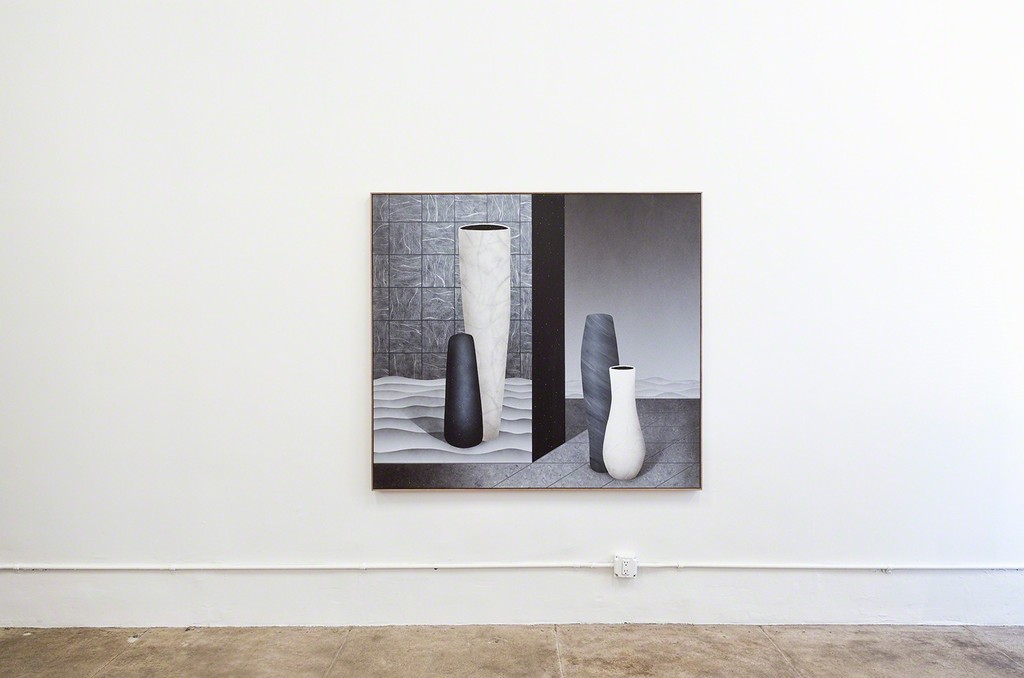 CES Gallery is pleased to present Hollowforms, a two-person exhibition featuring works by Los Angeles-based artists Orr Herz and Brian Robertson. A hollow form is a vessel, an object created to carry something inside of it. It is a constructed space from which material has been removed or moved aside for an other matter. Filling a hollow is an act of containment that might itself contain the filler’s desires or needs: fill a cup because you will be thirsty. Hollow-formed vessels are tools for storage and organizational solutions according to the Container Store Group, Inc., but decorative hollow forms serve functions too. The vessels depicted in Robertson’s paintings are maze-like ceremonial wind instruments; are broken into pieces waiting to be cataloged; are meditating in rooms, reminding us that they can be filled. Herz’s Sleep Handlers are also hollow forms – delicate wheels wrapped in scrolls of pictograms, symbols and ideas hovering around a hollow, vessels to carry thoughts.

Hertz and Robertson are interested in containers and symbols and their movements through space. A dark room, step down into a light room, a hand through the crooked blinds, a shadow from an object outside falls inside, folding screens – all space is accordioned, compressed into itself. Robertson’s dense spaces are meditative; in Center of the Wheel, the passage from space to space is suggestive of an inner journey, complete with a hollow form to mark time. The hands depicted on Herz’s sculptures are gestures of movement and measurement, perhaps instructions for complex motion through space or a retelling of an observed action. Two hands point to form the hands of a clock, echoing the shape of Robertson’s tubular vessels; clocks are wheels, but the movements portrayed on Herz’s sculptures are more like grains of sand escaping an hourglass. Hertz’s and Robertson’s complex visual systems propel the viewer around, centripetal forces with hollow forms at the center. Hollowforms is a vessel.

Orr Herz (b. 1980, Tel Aviv, IL) has exhibited in Los Angeles at Night Gallery, 356 Mission, Roberts & Tilton, and Chin’s Push, among other venues. He has exhibited in Israel at Museum of Bat Yam, Braveman Gallery, and Barbur Gallery, among others. Herz received a BA in History from Tel Aviv University, Israel, BFA from Bezalel Academy, Jerusalem, Israel, and MFA from University of Southern California, Los Angeles. His work has recently been reviewed in Artforum. Herz currently lives and works in Los Angeles.