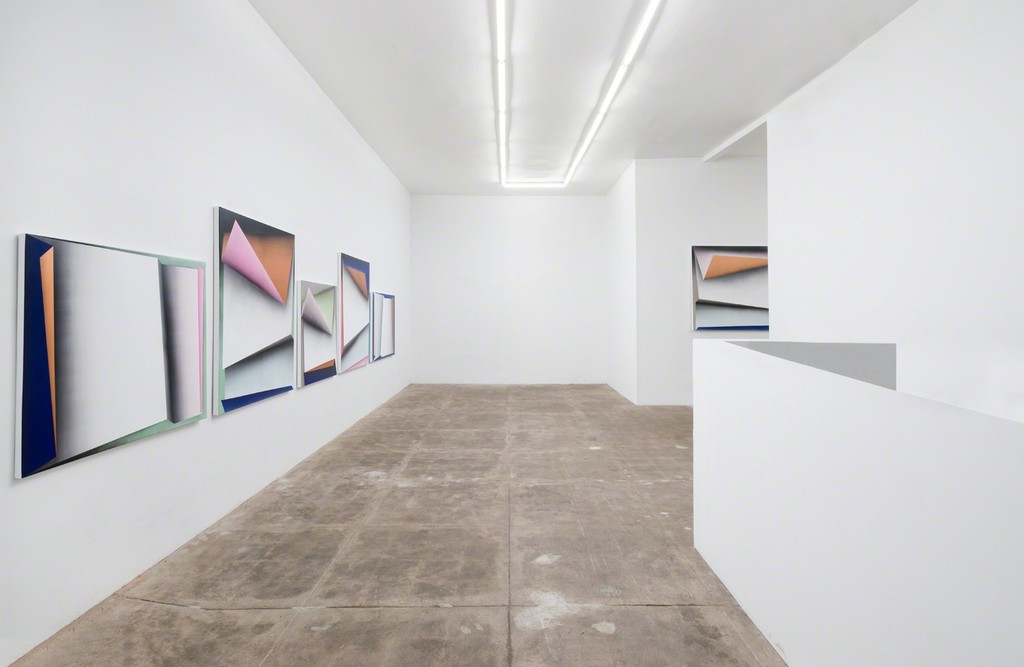 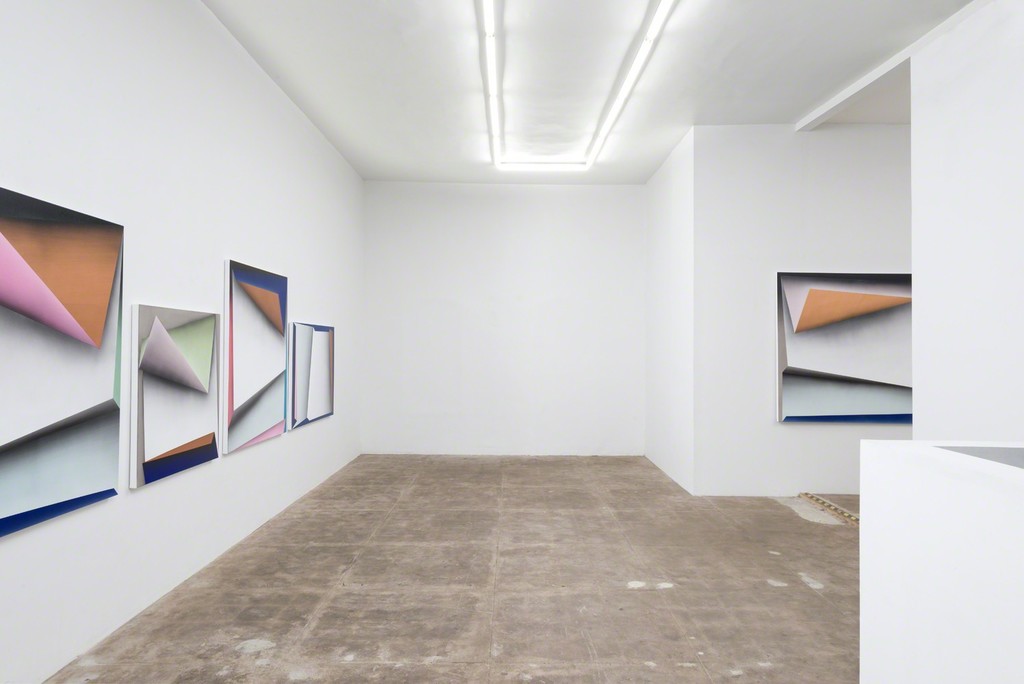 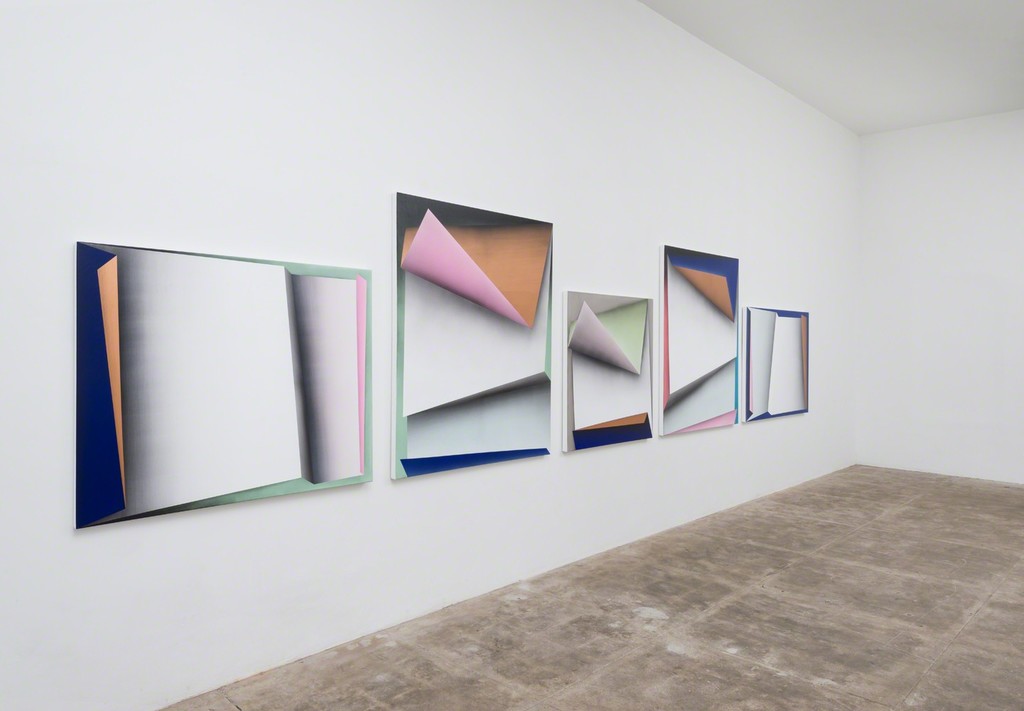 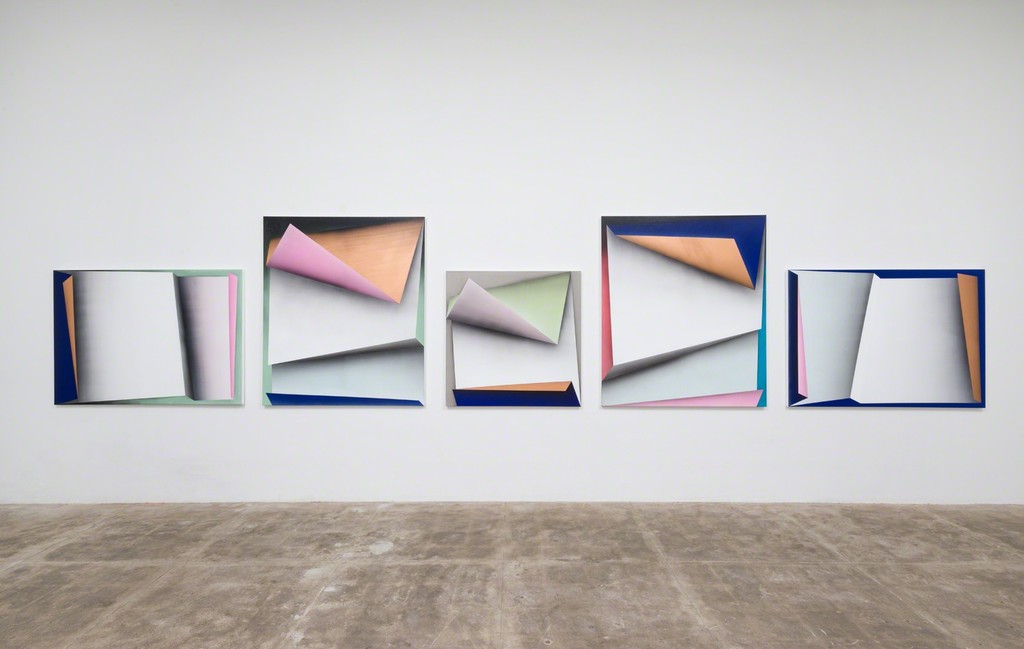 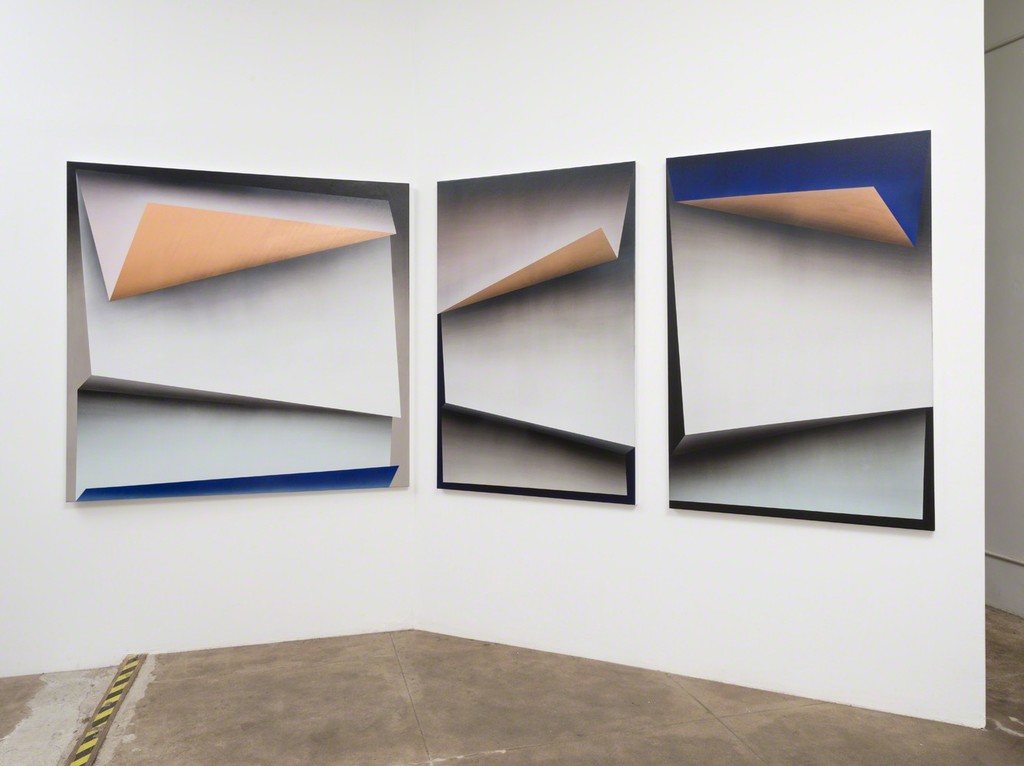 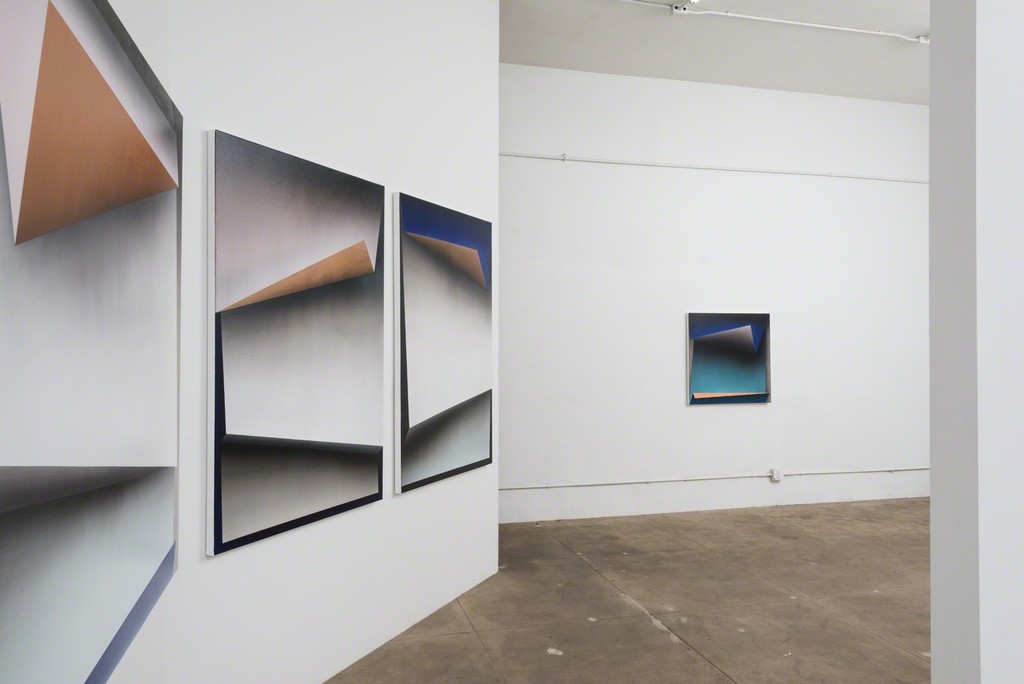 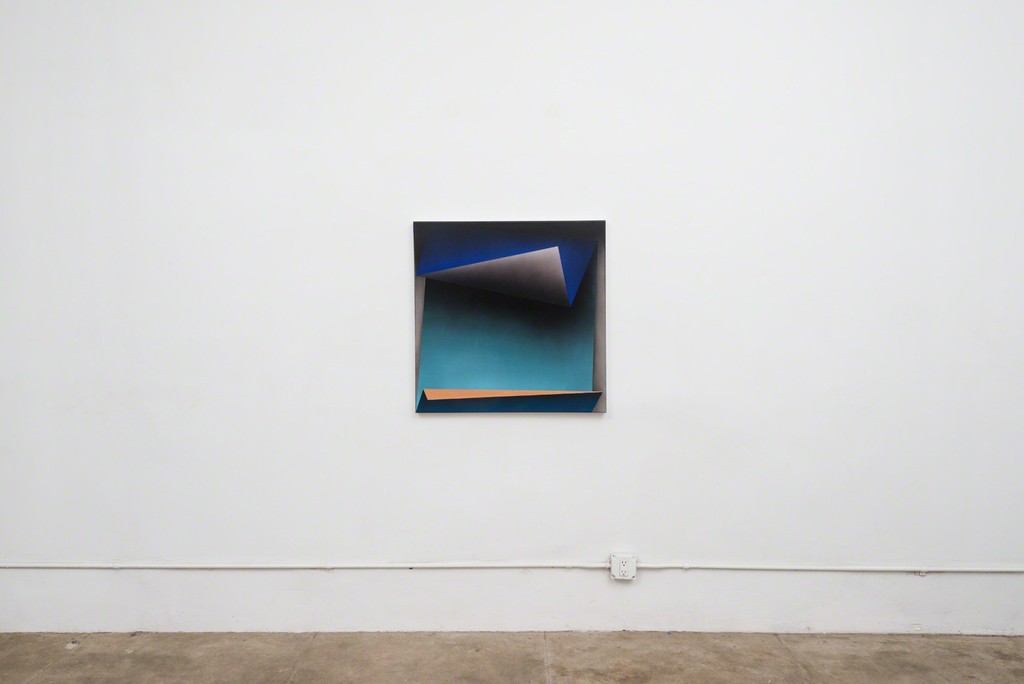 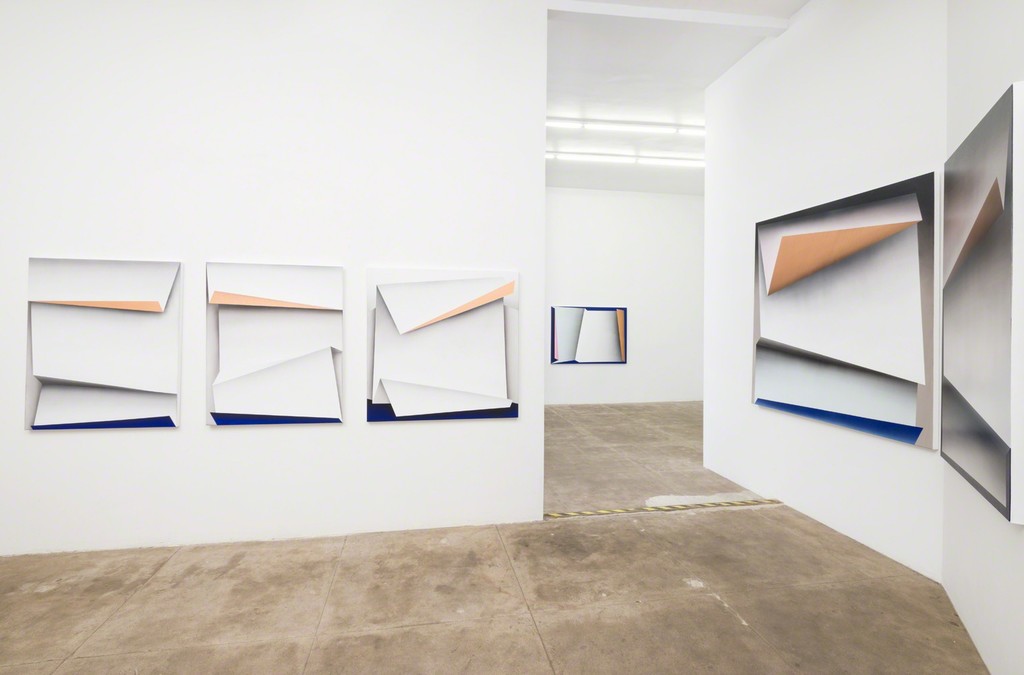 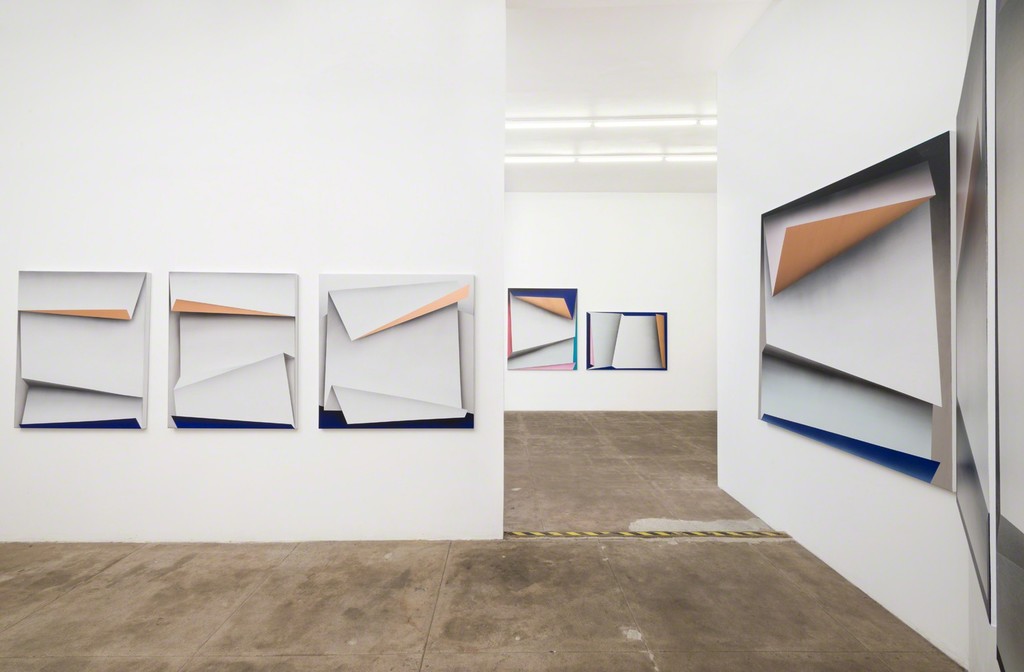 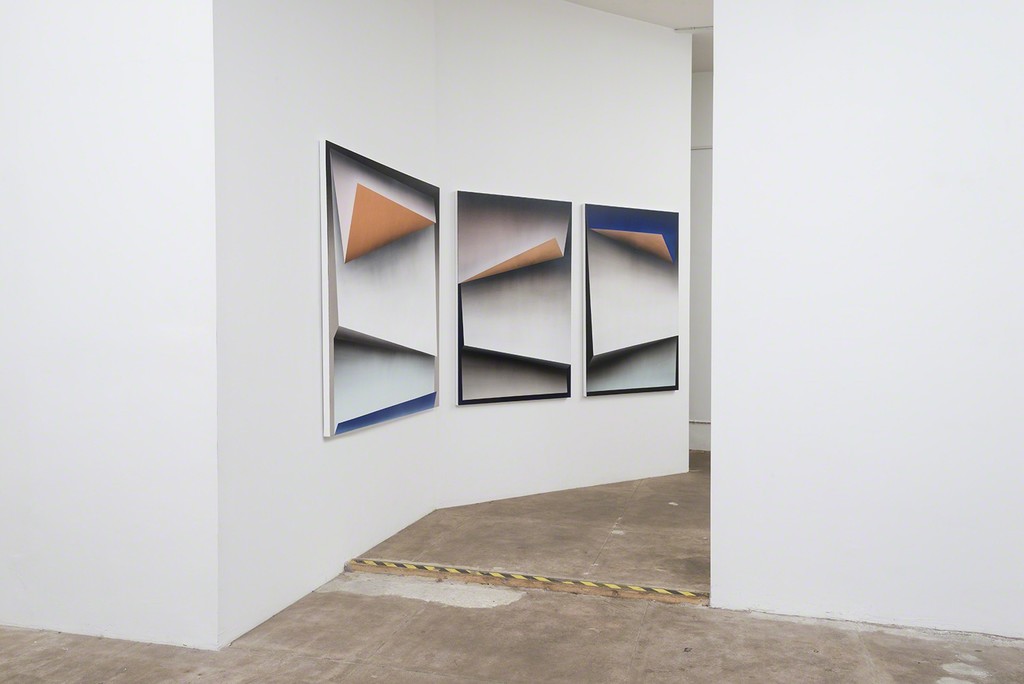 CES Gallery is pleased to present Inner Matter, Ira Svobodová’s second solo exhibition with the gallery. Svobodová’s paintings reference the visual vernacular of architecture and design. During the last five years, Svobodová has developed a formal language that articulates the properties of construction, tension, depth, and space. Brushy layers of moody colors meet in sharp angles to create rhythms of space, light, and time. In her most recent paintings, she continues ongoing experiments with a common architectural tool: paper models. Constructed during the early and most creative stages of building development, paper models resemble gesture drawings, creating fast and energetic space through the malleability of paper. Paper models capture the intuitive birth of ideas, free from the constraints of material reality. Svobodová’s paper models, originally used as stand-ins for architectural space, have evolved into proper muses. Hand-folded paper gestures with planes and angles that capture light and shadow are transcribed into painted lines, colorful shapes, and optically tricky fades. This depiction of paper in paint straddles both naturalism and abstraction. Svobodová’s playfulness as an artist is revealed – each painting contains both observed and imagined space, light, and color. She creates the paper space, then alters it at will.

Rich pastel pinks and springy greens are accentuated by bold teals and blues, all emerging from black and white paper on paper space. The angles are sharp and the space is decisive, with corners folding up to reveal copper surfaces. Inspired by design and utilitarian metal objects collected by Svobodová for her home, the copper brings a metallic warmth and a new psychological depth to the work. Svobodová’s decoration of real space, her nesting instincts, have have entered the conceptual spaces of her paintings. In The Poetics of Space, Gaston Bachelard’s 1958 critical text cum cult classic that applies the phenomenological apparatus to the field of architecture, “nesting” is described as a primal instinct to pleasurably withdraw into an intimate and safe space. The Poetics of Space muses on a lived experience of space, as distinct from an architect’s hypothesis of how space will affect an individual. Space, Bachelard argues, is not a container for three dimensional objects, but rather a vehicle for the expression of human consciousness. Svobodová’s paintings, products of the creativity that “nesting” fosters, could adorn any Bachelard dwelling.

Inner Matter is a tribute to the understanding of spatial relations. Svobodová’s paintings have been compared to the Japanese art form known as origami. The goal of origami is a fully realized sculpture created from one piece of paper using economical and precise methods. In Svobodová’s paintings, folds made during a concentrated period of time build the infrastructure of the final image and create a narrative of space that never stops suggesting something intrinsic about flatness. The result is a room full of painted architectural poems.

Ira Svobodová (b. 1986, Prague, CZ) received her BA and MA from the Academy of Fine Arts in Prague. Svobodová participated in a fine art fellowship at the Universidade do Estado do Rio de Janeiro in Brazil in 2009. Svobodová’s work has been exhibited at the Czech National Gallery of Modern Art, the Czech National Bank, the Ministry of Culture in Prague, the Franz Kafka House, and most recently at Zahorian & Van Espen in Bratislava, SK. Her work has been featured on Artalk, The Jealous Curator, Wallpaper, ArtNet News, and in The New Criterion, and was declared an emerging artist to invest in in 2015 by Saatchi chief curator Rebecca Wilson. Svobodová lives and works in Prague, CZ.