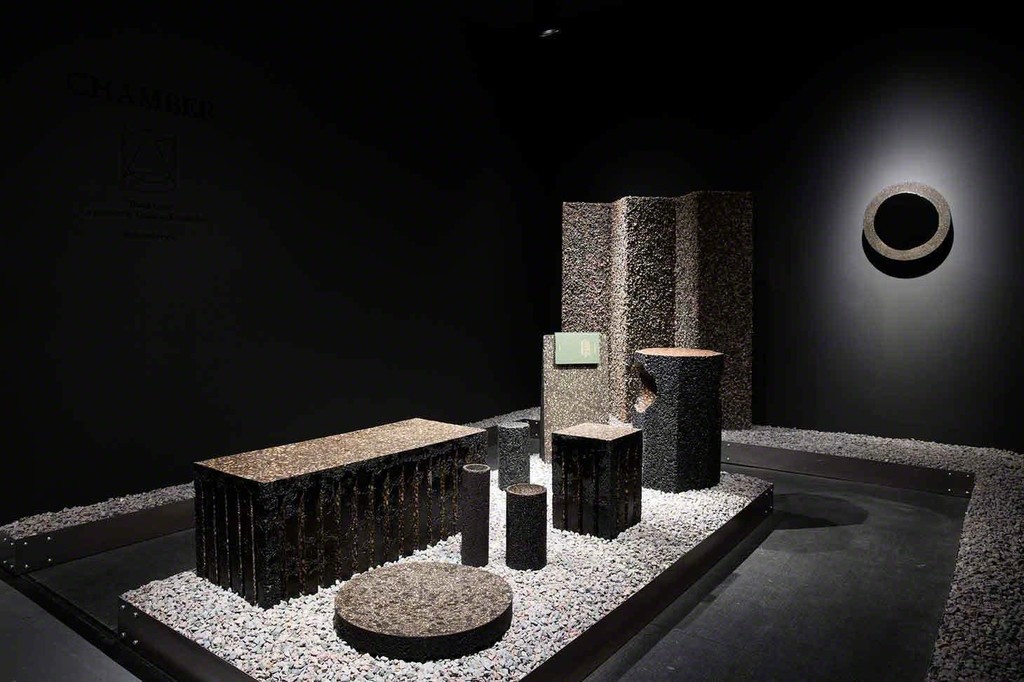 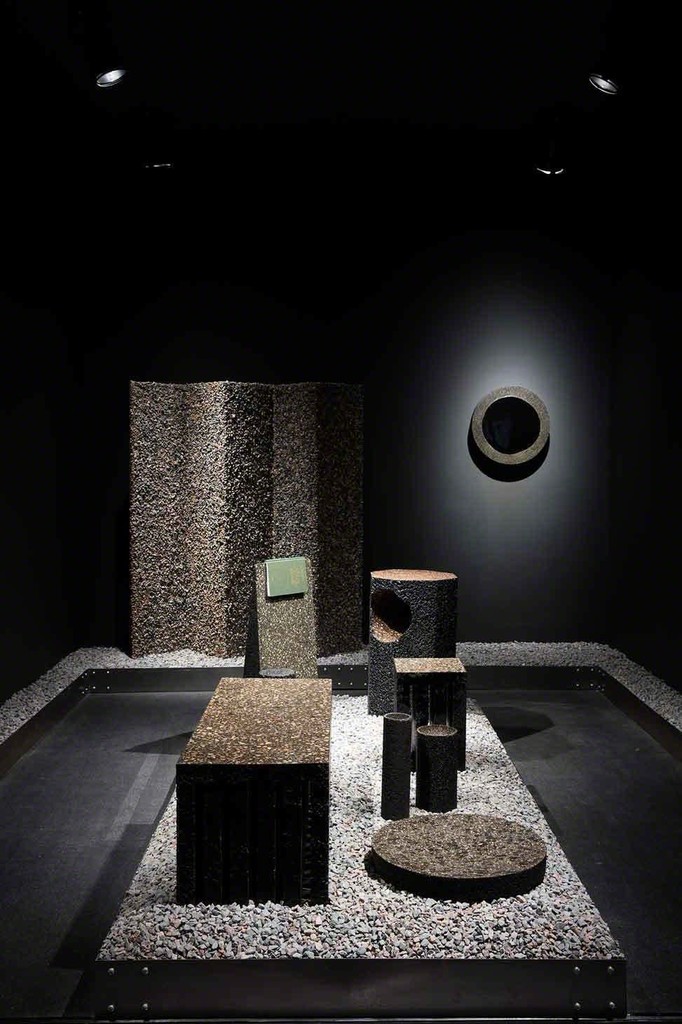 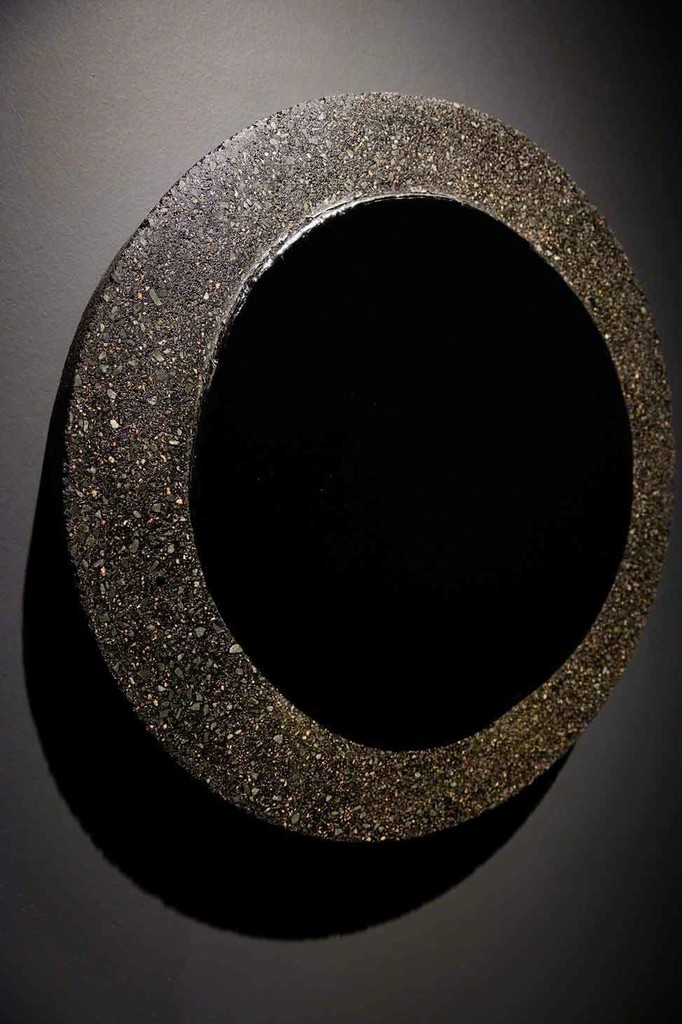 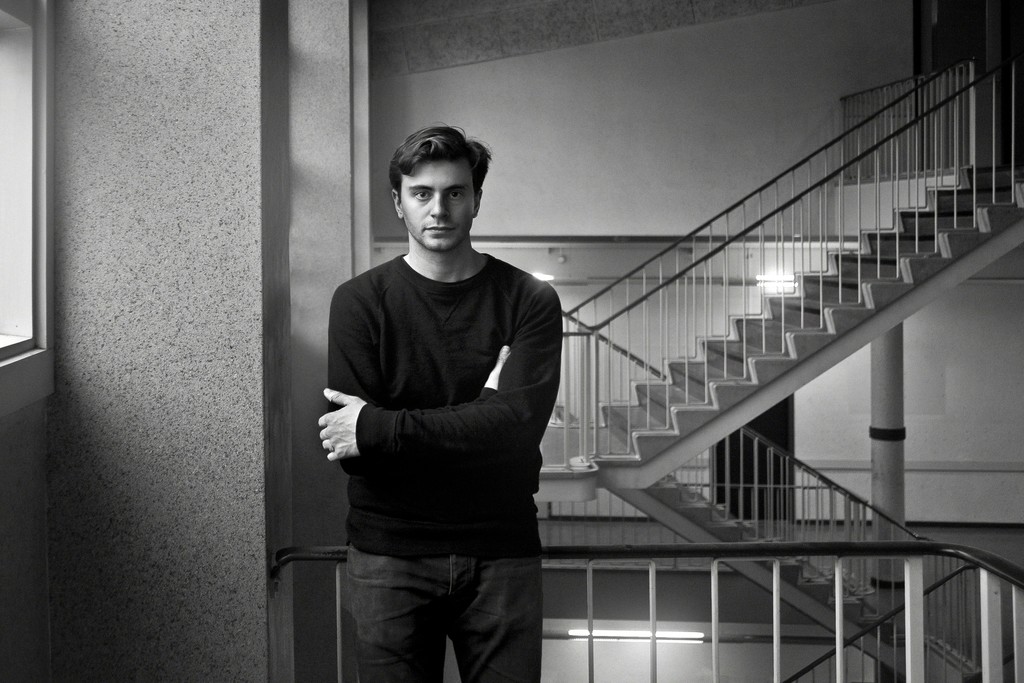 NEW YORK, NOVEMBER 2015—Chamber is pleased to be making its debut at Design Miami with the presentation of “Black Gold,” a project by Dutch designer Quintus Kropholler, December 2-6, 2015.

Through “Black Gold” Quintus Kropholler explores new and unconventional uses of asphalt, a material often overlooked in our everyday lives. There are tremendous aesthetic possibilities, from the dark sparkling luster of its surface to the many colors and textures to be found in its interior. By exploiting the unique properties of asphalt, he creates design objects inspired by the forms found in the laboratory. Each piece is thought of as an architectural expression of its particular function, derived from the geometries of the sphere, the cube, the cylinder and the pyramid. From one piece to the next, there is variation in color and texture due to the shift in the constituent stones and the cutting and polishing of various surfaces.
The use of asphalt and bitumen goes back to the fifth millennium BC, and it was used by the ancient Sumerians in construction, shipbuilding and in the making of works of sculpture. The Egyptians used is it also in the process of embalming.
In ancient times as in the present, one of the primary sources of the oil used for the production of bitumen and asphalt was the Near East. With the use of oil as a source of energy in modern times, however, there has been a shift in the commodity value of oil, as it has become a precious substance often referred to as “black gold.”
Yet asphalt, an amalgam of stone and bitumen, retains its ubiquity as an essential constituent of our urban fabric. Even in our technologically driven society, it has remained largely unchanged, and its beauty and potential have been unseen. With “Black Gold” Quintus Kropholler literally breaks open the ground beneath our feet to reveal its inner beauty.

With a background in product design and a fascination with sociological ubiquity, Quintus Kropholler founded his namesake studio in Amsterdam in 2010. His art practice aspires to shift the cognitive perspective of the spectator/consumer/user by creating physical items than can be touched, held, and interacted with rather than traditional art pieces made for purely aesthetic purposes.

Taking the Renaissance-era Cabinet of Curiosities as its inspiration, Chamber is a twenty-first century reliquary for unusual objects and a platform for design experimentation. Each year, a guest designer or artist is invited to curate the gallery’s central program, bringing their unique viewpoint to Chamber through specially commissioned pieces, one of a kind works of art and rare vintage artifacts. In addition to the yearlong Collection program, Chamber also presents short-term Capsule exhibitions, which explore in depth the work of a single designer or a special theme.

Design Curio is Design Miami’s new exhibition platform, which invites designers, curators, innovators and galleries to present cabinets of curiosities throughout the fair. Each Curio will reveal a total environment of objects, textures, artifacts and ideas that challenge and contextualize familiar design narratives.

The program spans the twentieth and twenty-first centuries, and emphasizes surprising installations of scientific and technological research alongside handcraft and creative production. The Curios are interspersed amongst Design Miami’s core galleries, infusing the fair’s exhibition program with inventive snapshots of today’s design landscape.