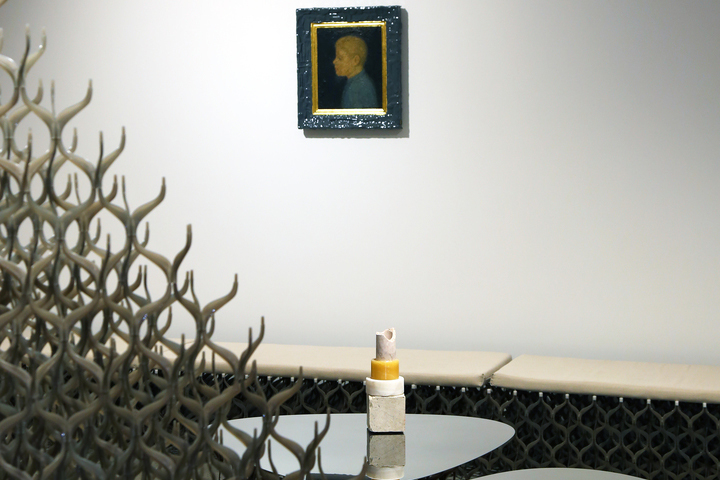 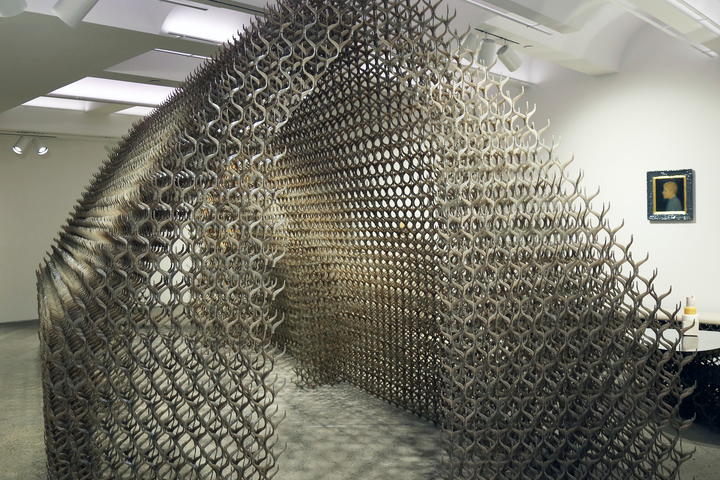 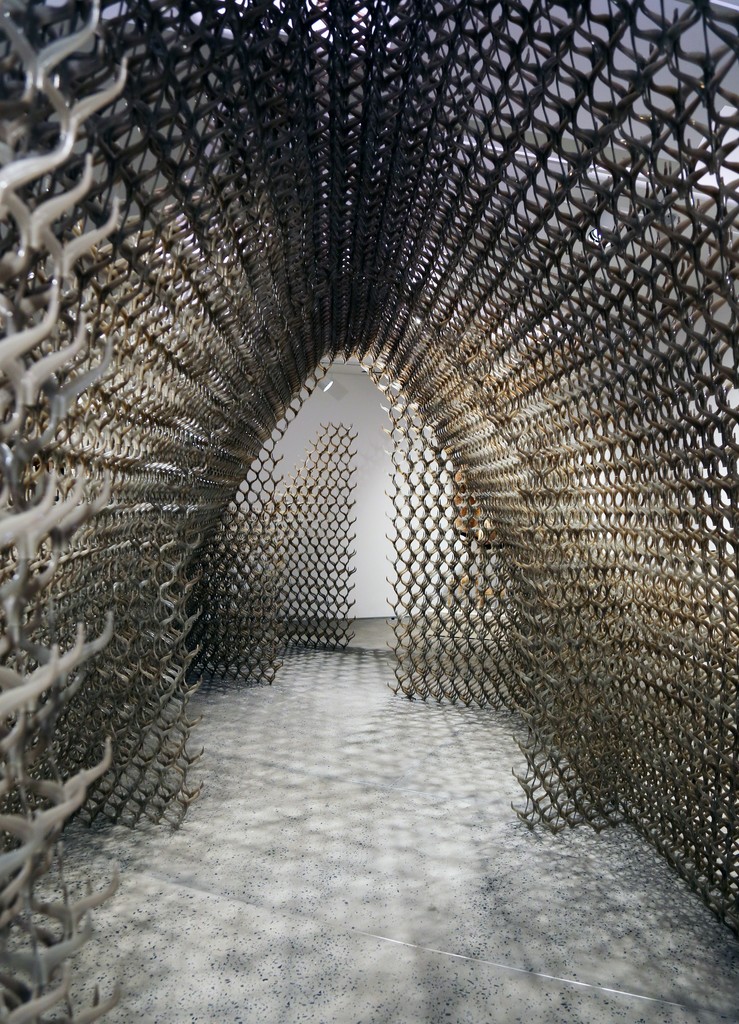 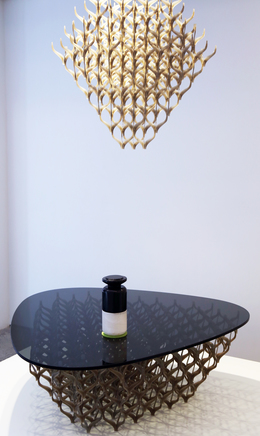 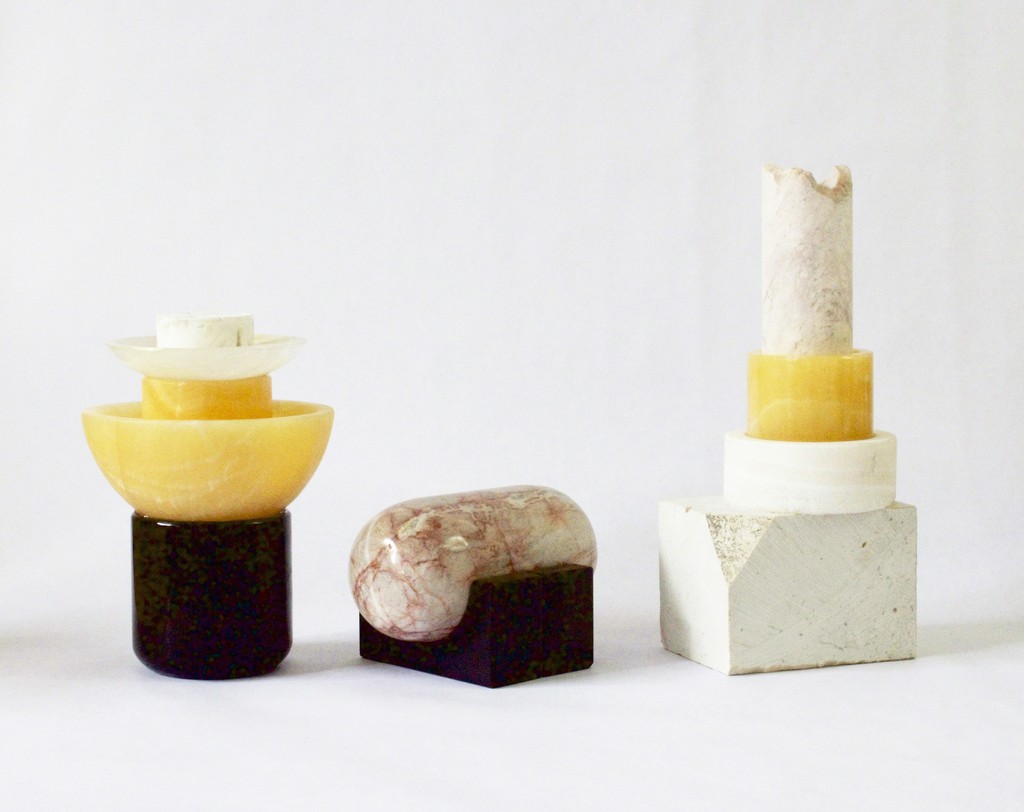 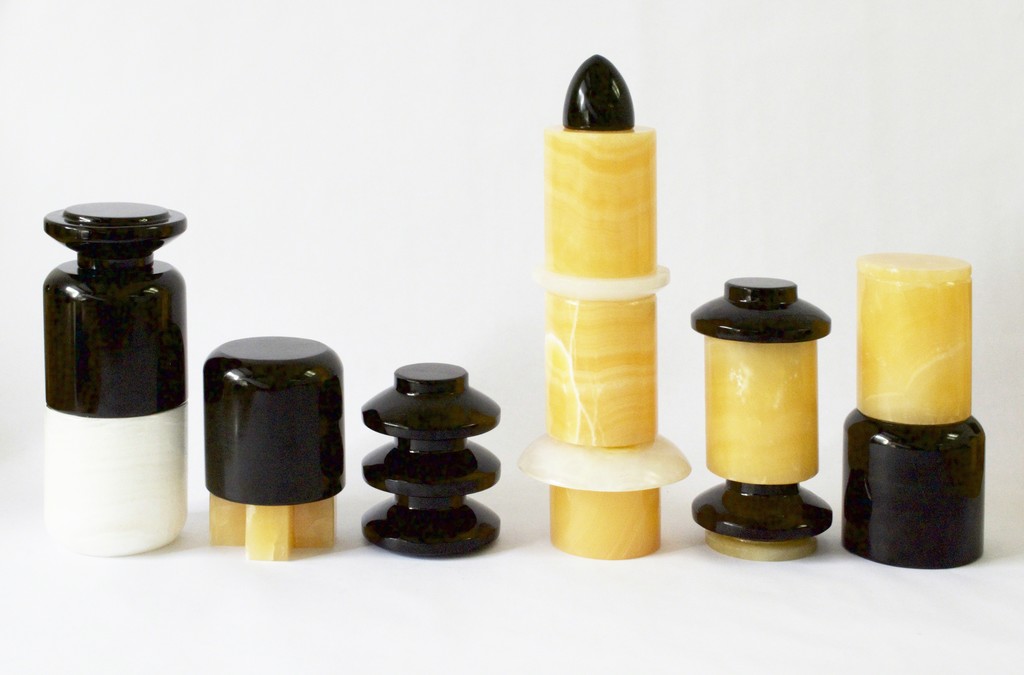 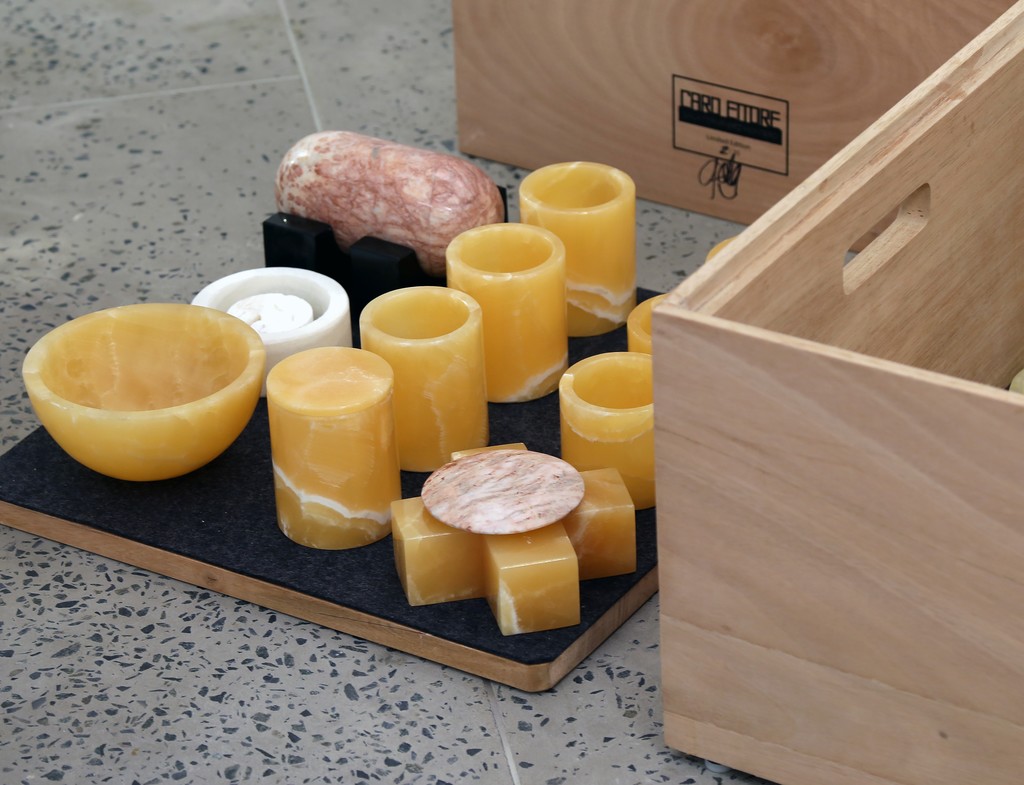 THIS IS NOT A DUET

New York, NY - April 8, 2015: Chamber is pleased to present THIS IS NOT A DUET, an exhibition of works by Gala Fernández Montero and Sung Jang, curated by Maria Cristina Didero and Juan Garcia Mosqueda. The exhibition will be on view May 15th through July 3rd, 2015. There will be an opening reception on Thursday, May 14th, from 6 – 8pm.

THIS IS NOT A DUET presents two separate solo exhibitions within the same space. The curators bring together these two distinctive idioms to play a game between duality and opposition, complement and contrast. The exhibition provides an extraordinary meeting point for two voices that speak different languages: it aims to present two contemporary talents in an unusual and evocative way. Each designer works with sequences of elements to create bold forms using different media – carved and polished stone objects which may be combined in a variety of ways, in the case of Caro Ettore by Gala Fernández Montero; injection molded plastic modules which interlock to form larger structures, in the case of Mobi by Sung Jang.

Gala Fernández Montero is based in Mexico City, where she works with natural materials such as glass, stone and wood with a highly refined and elegant touch. For THIS IS NOT A DUET, Fernández Montero will present Caro Ettore, two series of beautifully hand-crafted and polished objects, inspired by iconic Italian designer Ettore Sottsass’s signature use of color matching and contrasting tones. 16 Little Sculptures is a set of limited edition small-scale objects comprised of different materials. Adult Games consists of thirty-two objects of different shapes and sizes presented in a meticulous box, that are intended to be arranged in various ways by the user to create unique sculptures. Montero created these collections as her own personal homage to Sottsass’ inspiring and playful approach to design and architecture.
Caro Ettore is curated by Maria Cristina Didero.

Mobi is Sung Jang’s investigation into the understanding of the basic construct of human perception known as beauty, through a modular element stacked in succession to form shapes and surfaces. Independently, the module is similar to a lightweight architectural buttress, streamlined to divide and distribute weight. Jang’s imaginative compositions create stirring figures - sometimes anthropomorphic, sometimes related to the world of architecture. Mobi is a project that possesses the ability to catapult the viewer into an imaginative world of both visionary and authentic forms in which tangible subjects are recognized as they are approached.
Mobi is curated by Juan Garcia Mosqueda.

About Gala Fernández Montero
Gala Fernández Montero’s multidisciplinary work ranges from art, design, curatorial projects, interior and product design, to graphic design and publishing. Since 2012, Fernández has divided her time between Mexico City, where she works at Piopio Design Labs in partnership with Berta Roda, and Madrid / Marbella, where she collaborates with artist and designer Oscar Mariné. In 2013, Fernández helped launch Abierto Mexicano de Diseño (the Mexico City Design Festival), and continues to act as a partner and consultant in the project. She co-founded the Madrid studio Assembla Design with Riccardo Marzullo, and has worked with Jaime Hayon at the Benetton Group’s Fabrica studio. She studied art and design at Facultad de Bellas Artes de la Universidad Complutense de Madrid, and at the Istituto Europeo di Design di Milano, Italy. She has taught and lectured at numerous institutions including the Domaine de Boisbuchet, France; Instituto Europeo di Design, Madrid; Faculdade de Arquitectura da Universidade de Lisboa (FAUTL), Lisbon; NAi Nederland Architectuurinstutuut, Rotterdam; and the Royal College of Art and Goldsmiths, London.

About Sung Jang
Sung is a graduate of the School of the Art Institute of Chicago and Domus Academy in Milano with a Masters in Design. Sung began his design career in Milano at Samsung Design Milano before taking a faculty position in the School of the Art Institute of Chicago's Designed Objects program. Since 2013, Sung has served at the University of Illinois at Chicago's School of Design as an Assistant Professor and Director of Undergraduate Studies to the Industrial Design program. Through his design and research practice, Sung Jang Laboratory, Sung strives to compose works that carry significance beyond functional extent which display and initiate dialogues regarding design’s roles and capabilities in social, cultural, emotional, artistic realms. In parallel to the independent practice, Sung serves as a partner in Article, LLC, a design consultancy based in Chicago. Sung has worked with international brands such as Louis Vuitton, Guzzini, and Roche Bobois and been represented internationally at Venice Biennale, Design Miami, Victoria and Albert Museum and the aA Design Museum, among others.

About Maria Cristina Didero
Maria Cristina Didero is an Italian freelance design curator and journalist. She has worked for more than ten years for the Vitra Design Museum and from 2011 to January 2015 she acted as Director for the Bisazza Foundation. She has presented curatorial projects in some of the most prestigious institutions, including the DESTE Foundation in Athens, the Galleria d’Arte Moderna in Turin, the Museo di Arte Contemporanea in Genoa, and Museo del Novecento in Milan. She is in charge of the design talks for miart Art Fair in Milan and she has recently presented a project by Carlo Massoud titled Arab Dolls at the Armory Show in NY. Last shows presented in occasion of Milan Design Week are BODY BUILDING by Atelier Biagetti and JAMES IRVINE: An English Man in Milan, co-curated with Marco Sammicheli. As a writer, among others, she has published a book on Michele De Lucchi design with drawings by Steven Guarnaccia, she wrote the introduction for 1968 book by Maurizio Cattelan and Pierpaolo Ferrari and contributes on a regular base to different magazines internationally, such as Domus, Vogue Casa, AD and L’Officiel Italia.

About Juan Garcia Mosqueda
Juan Garcia Mosqueda is the Founder of Chamber, a curated art and design boutique located in Chelsea, NYC. Juan was born in Argentina and educated in the US, and graduated from the School of the Art Institute of Chicago with a degree in De-signed Objects. He acted as assistant to Murray Moss and Franklin Getchell at Moss and then later as Projects Director for Moss Bureau, where he organized Moss, The Auction at Phillips de Pury in 2012. He also worked at MoMA under Paola Antonelli, Chief Curator of Architecture and Design. Juan founded Chamber in 2013.

About CHAMBER
CHAMBER is a boutique of one-of-a-kind, rare and limited edition objects of design and art. Founded in 2014 by Juan Garcia Mosqueda and located in New York City, Chamber takes the Renaissance-era “Cabinet of Curiosities” as its inspiration. The gallery aims to be a twenty-first century reliquary for unusual objects, as well as a platform for design experimentation. As a central part of its program, an artist or designer is chosen to curate an entire collection, bringing their unique viewpoint to Chamber through specially commissioned works and rare and vintage items. www.chambernyc.com
For visuals or more information, please contact:
[email protected]
+1 (212) 206 0236