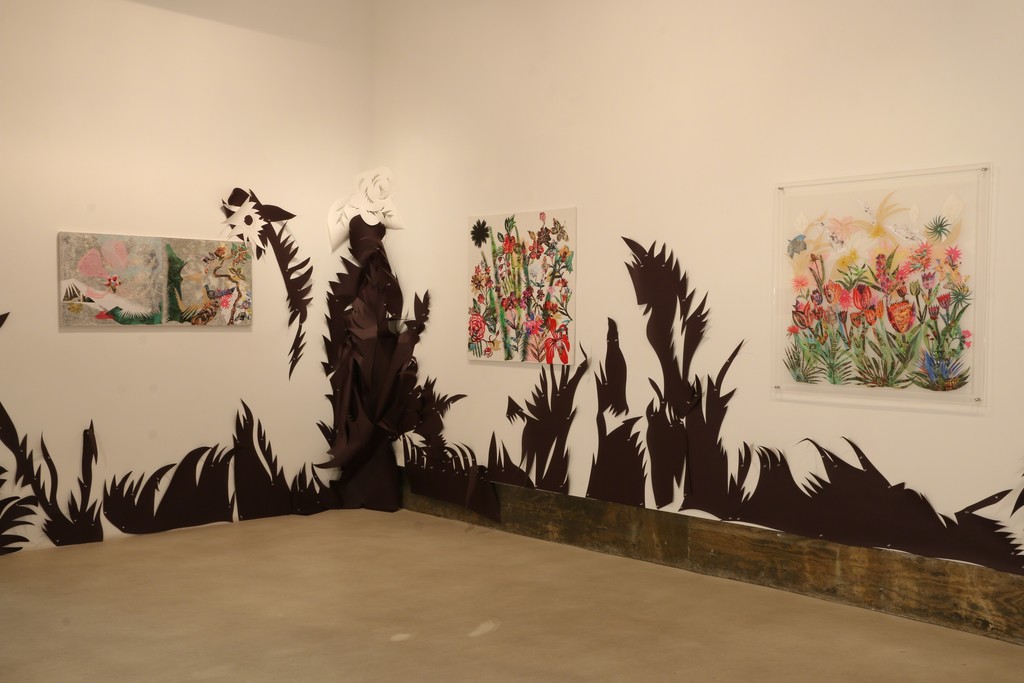 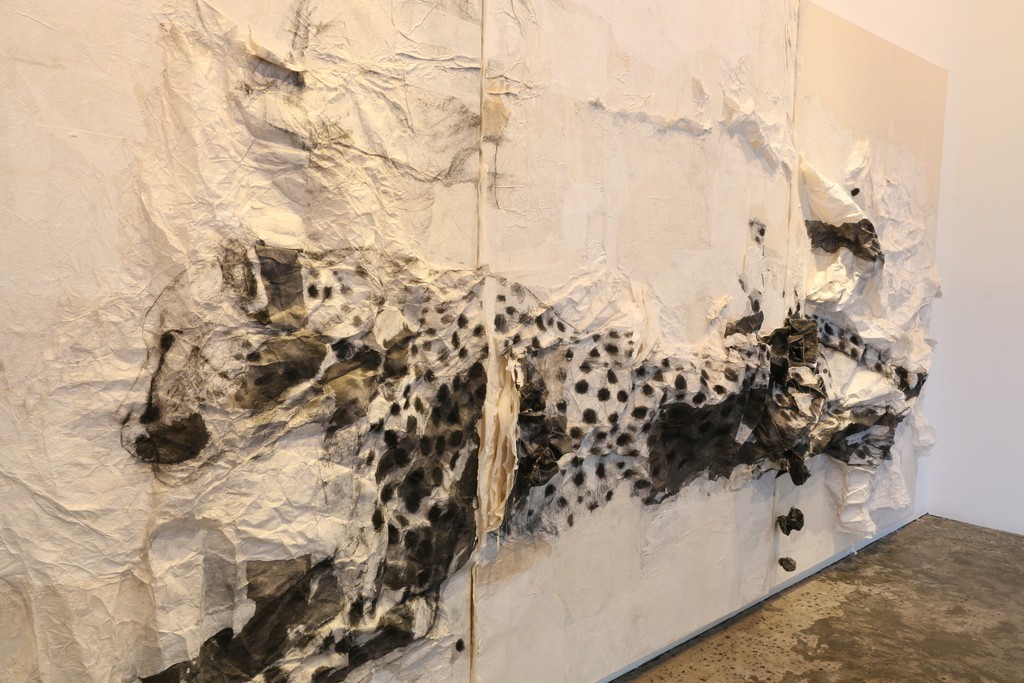 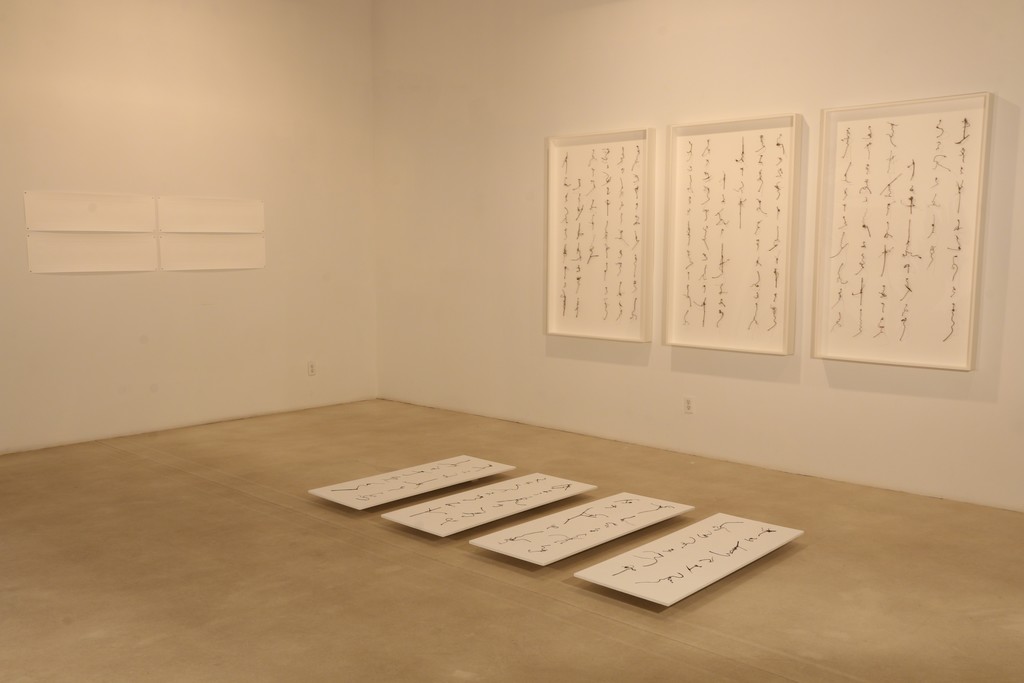 Chambers Fine Art is pleased to announce the opening on November 17, 2016 of In Perspective: Lin Yan, Song Xin and Cui Fei. Born in China, Lin Yan, Song Xin and Cui Fei have lived in the United States for many years but for each of them the multiple cultural and artistic associations of their formative years in China are of fundamental importance, although viewed from different perspectives. Seen together the works of these distinctive artists are enriched by the complex patterns of similarities and dissimilarities that emerge in their response to thematic concerns and the diverse range of media in which they work.

After graduating in painting from the Central Academy of Fine Arts (CAFA), Beijing in 1984, Lin Yan continued her studies in Paris and the United States where she settled in the early 1990s. Unresponsive to the Chinese oil painting of the early 1990s that was rapidly gaining international recognition, she began experimenting with the traditional Chinese media of hand-made xuan paper in paintings that were becoming increasingly sculptural. The material qualities of the paper became her medium for expressing her relationship to her immediate environment, the studio, and the traditional architecture of Beijing that was rapidly disappearing as land was cleared for new developments. A tall, elongated piece enititled Back to Beijing includes the use of paper moulds of traditional roof tiles, a reference to this disappearing architecture. Her technique of moulding objects out of paper extends to her New York surroundings, where city cobblestones, her studio floor, and fallen tree branches appear in her work. As she gained confidence in her handling of this material, Lin used it in installations that grew out of a direct response to specific locations, using large quantities of it to define spaces and to create three-dimensional forms. Although based in Brooklyn, her early years in China as the youngest in a distinguished family of artists, and her growing awareness that the traditional culture of China was rapidly disappearing, still permeate her work even although in a highly sublimated form.

Cui Fei’s development as an artist has followed a similar course although she graduated from the Zhejiang Academy of Fine Arts in Hangzhou (now China National Academy of Art) in 1993 before moving to New York in 1996. While still in China she started incorporating natural elements into her paintings, but it was after her move to the US that she began her Manuscript of Nature series, when the chance discovery of some dried grape tendrils that had fallen off an installation made from grape vines led to a complete transformation in her practice. The similarity that she detected between the sinuous form of the tendrils and Chinese calligraphy in the grass style was the first step in what was to become an ongoing investigation of the relationship between human beings and nature. She has noted how “For the ancient Chinese, there is no distinctive human nature apart from natural nature. In Chinese cosmogony, nature, human beings, and all other parts of the cosmos equally belong to one organic whole. They interact with each other and are governed by the same natural laws. Today’s problems between human beings and nature are universal, and these ancient concepts can shine some light on resolving the problems. I use Chinese characters as an example to emphasize how important nature is to our culture and lives.” This insight characterizes her installations, a major aspect of her practice, and works in other media including photography and sculpture. Separated from daily life in China, she is able to distill her reflections on the characteristics unifying so many different aspects of Chinese culture without the distractions of being in the midst of everything. Although similar in
some respects to the attitude of Lin Yan, her focus on natural forms and the crucial role of the written word in Chinese civilization imparts a very different feeling to her work.

Like Lin Yan, Xin Song had also studied at the Central Academy of Fine Arts (CAFA) in Beijing before arriving in the United States in 2000. In her case, however, she graduated from the newly established Department of Chinese Folk Art and had made an intensive study of the traditional Chinese craft of paper cut under Lu Shengzhong. “Through paper cutting,” she has noted, “I try to take what is ordinarily a folk, vernacular form, not too highly regarded in terms of artistic hierarchy, and turn it into a serious art form.” The move from the tightly controlled environment of China to the more liberal atmosphere of the United States had an immediate effect on her work. Overwhelmed by the ready availability of magazines, not only serious publications but also fashion, pornography etc., she utilized this material in her paper cuts, giving an unexpectedly political edge to what at first glance might appear to be primarily decorative images. Increasingly, she has turned to installations in which the material used in her paper cuts relates to the environment in which they will be installed. In the case of her Life in Bloom series and installation in the current exhibition, a mélange of images related to the flora of the High Line provides a deceptively sunny background for images documenting the current refugee crisis engulfing Europe.

Eight years ago, Lin Yan curated an exhibition Touched by Women’s Hands which also included the work of Cui Fei and Xin Song, along with several other artists. While the focus in that exhibition was on their hands-on approach which contrasts with the division of labor characteristic of many currently successful Chinese artists, In Perspective examines the different ways in which their Chinese cultural background is still the defining feature of their practice at the same time as it has been transformed by their long - term residence in the West.