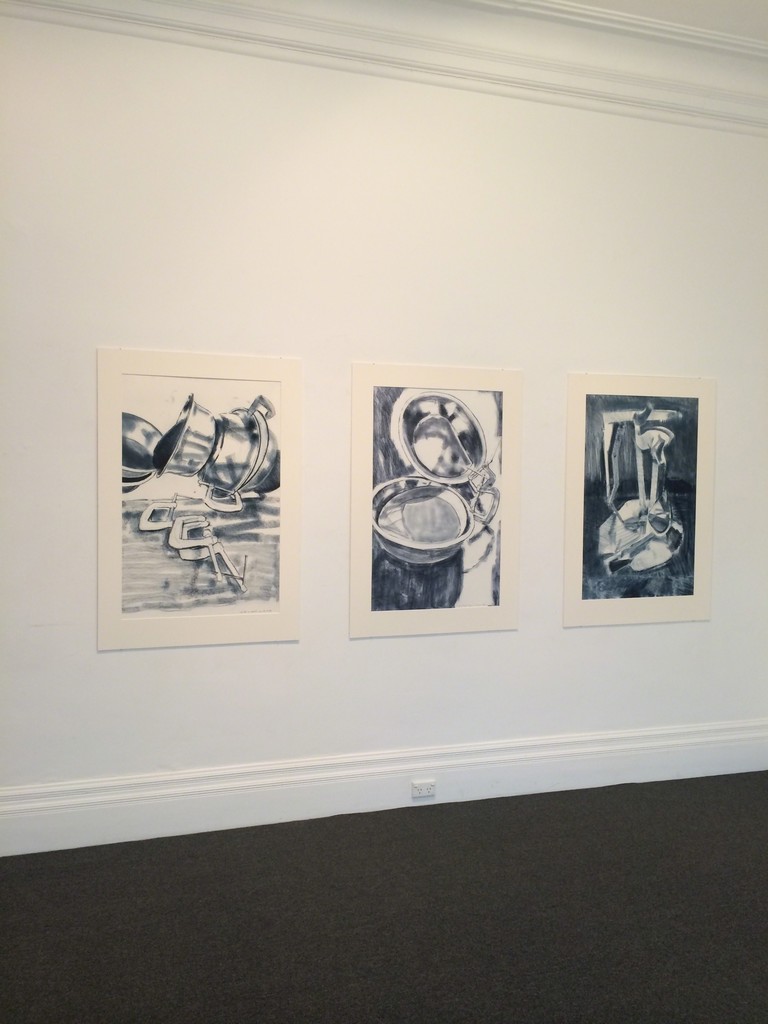 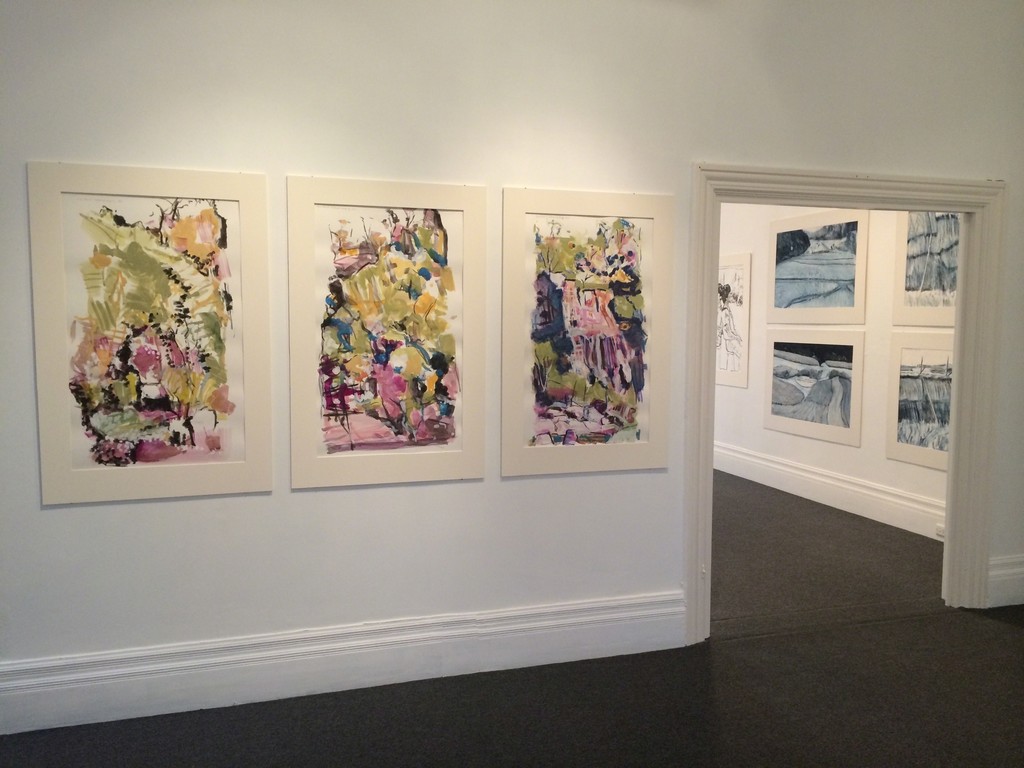 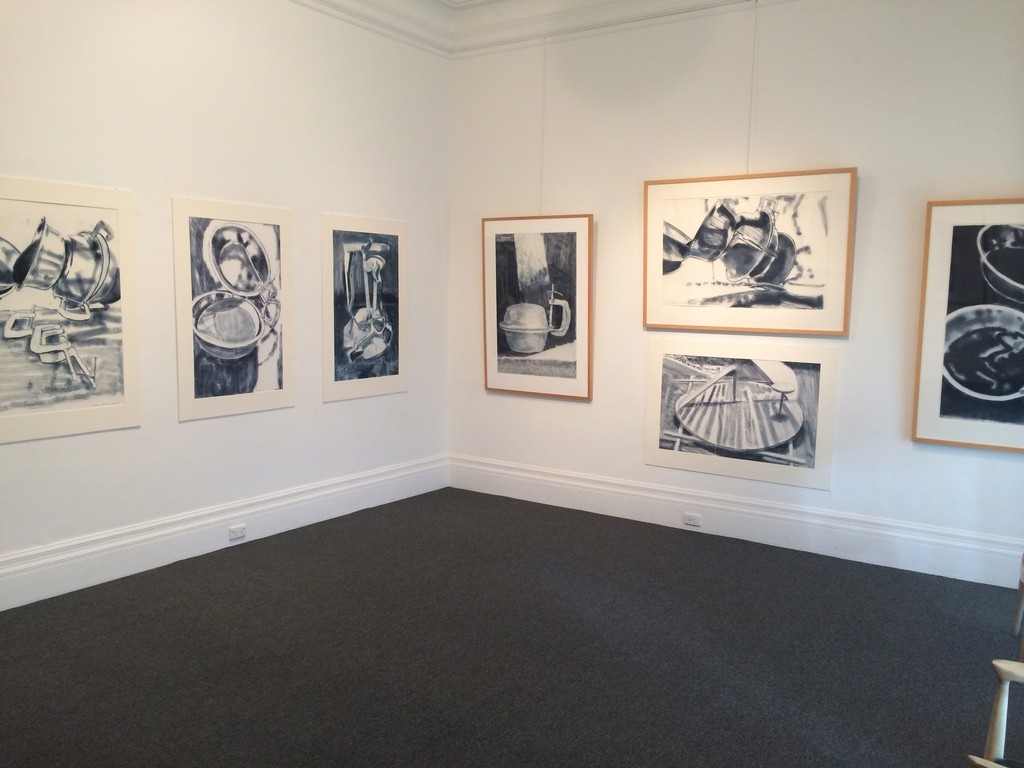 This survey exhibition, of which over half the works are being shown for the first time, has been selected by the artist, Rebecca Guest and myself, to offer a fair representation of three significant aspects and phases of over half a century of drawing.

The Western tradition tends to see drawing as ancillary (even secondary) to painting: typically, artists draw studies for future compositions in oil. So it is somewhat paradoxical that the vast proportion of painters maintain that drawing is absolutely central to their practice. Another seeming contradiction is in the artists’ own responses to drawing: in the same breath they talk about freedom and about discipline. Presumably the freedom comes from the speed and ease with which marks and lines can be made with brush or pencil. And the discipline will come from what might be called the intransigence of drawing. An unsatisfactory passage in oil can be disguised (and overlooked) whereas any lack of graphic assurance is immediately visible. In this sense drawing is both revealing and unforgiving.

Drawing demonstrates another aesthetic divide in Western art - the formal versus the expressive: veristic rigour and precision as opposed to calligraphic and painterly boldness. In Australia, the difference can be seen in the touch of, say, Brack and Smart compared with Williams and Olsen. In this division, the former tend to depict whereas the latter tend to suggest or evoke. Guy Stuart - broadly speaking - does both but with the accent on the latter.

The first group of works in this survey includes a strong body of studies. Suspended Net (no 9) explored the net and lattice forms which were worked up into large wall hangings; their pleats and folds migrated to the floor and were realised - ‘built’ might be a better term - as the huge three dimensional installation-sculpture Continuous Wooden Floor, 1970, (no 10) made and shown at Gallery A in Melbourne in 1970.

The second group were done in Japan (nos 15 – 31) and here we need some biography. In 1956 his father was appointed Trade Commissioner in Tokyo and the son’s first visit the following year proved highly influential. For the relatively sheltered Melbourne teenager (school at Melbourne Grammar, where the art master, John Brack, was the first to recognise, encourage and guide his nascent talent) Japan was at once a shock to the system and a breath of fresh air. To the daily experience of streets, crowds and architecture was added the underlying experience of a different way of seeing the world. His second trip to Japan in 1985-6 was equally significant for it not only produced a fresh body of work but it was then and there that he decided to focus exclusively on landscape. This has remained his subject ever since and examples constitute the third group in the show (nos 32 – 47)

Historically, Japan has a parallel formal and expressive divide in its aesthetic: but whereas the taut forms of Japanese printmakers electrified Europe in the late 19th century, the young Guy Stuart responded to the calligraphically orientated side of their practice.
Japanese art influenced aspects of American and Australian Abstract Expressionism in the 50s (Kline and Upward), Stuart’s work remains firmly embedded in the visible world regardless of whether the subject was Japanese or Australian. If the former appear more ordered and settled than the latter this is largely a matter of the subjects themselves: rice fields in Japan are more ordered than the bush in Australia. Nevertheless, an East Wind blows through them all – an influence he acknowledges and celebrates.
Equally significant his painting on canvas began to mirror his drawing on paper, in both its rigour and brevity with the paint surface often reduced to a series of spare, brisk lines.

So, returning to the issue of depiction vs suggestion, the latter has always held sway in Stuart’s work. This evocation is achieved not by painting the surface of the land but by marking down the essential visual bones and structures that allow us to recognise these marks on paper as landscapes in the world, and interpret a series of lines as a tree or a hillside. Whilst the oriental tradition prizes spontaneity, it also insists that this can only be achieved by endless practise (In this it mirrors, at least in part, the Western tradition which holds that a good watercolour should only take a few minutes). If Guy Stuart’s lines exemplify this confidence and assurance it’s basically because he has spent fifty years teaching them where to go.