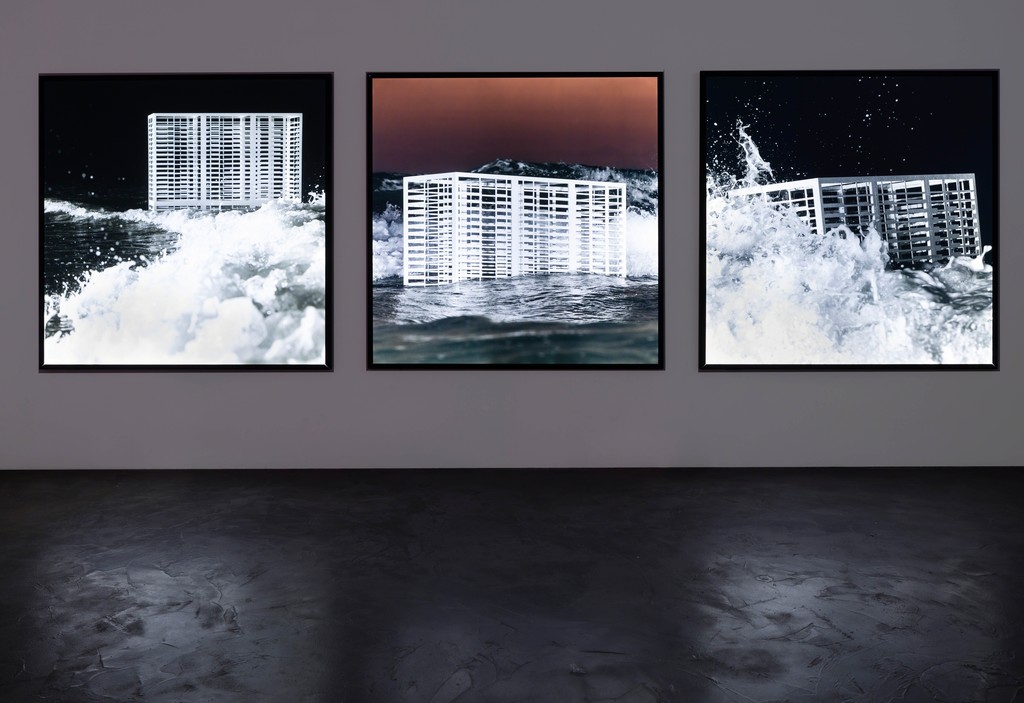 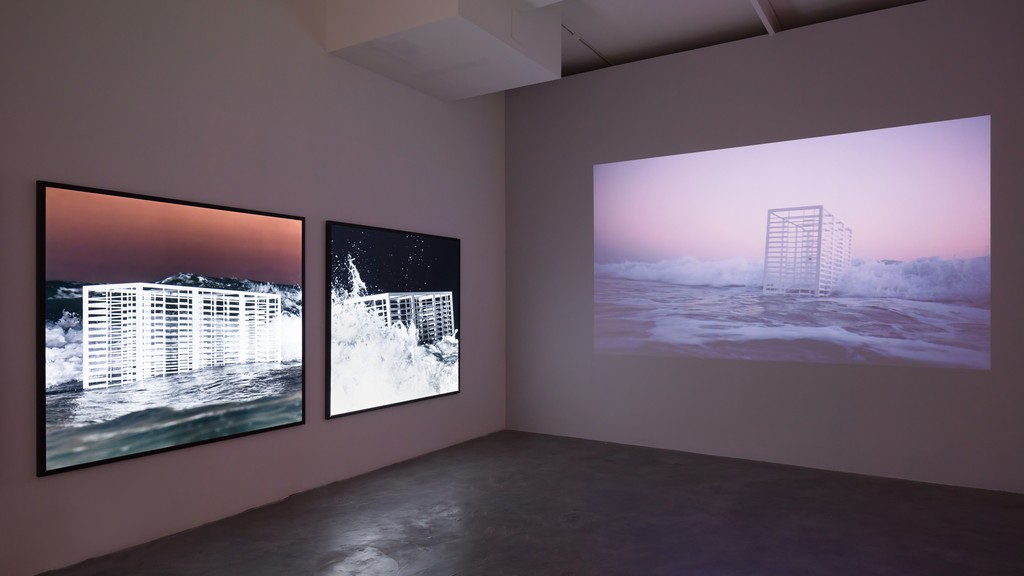 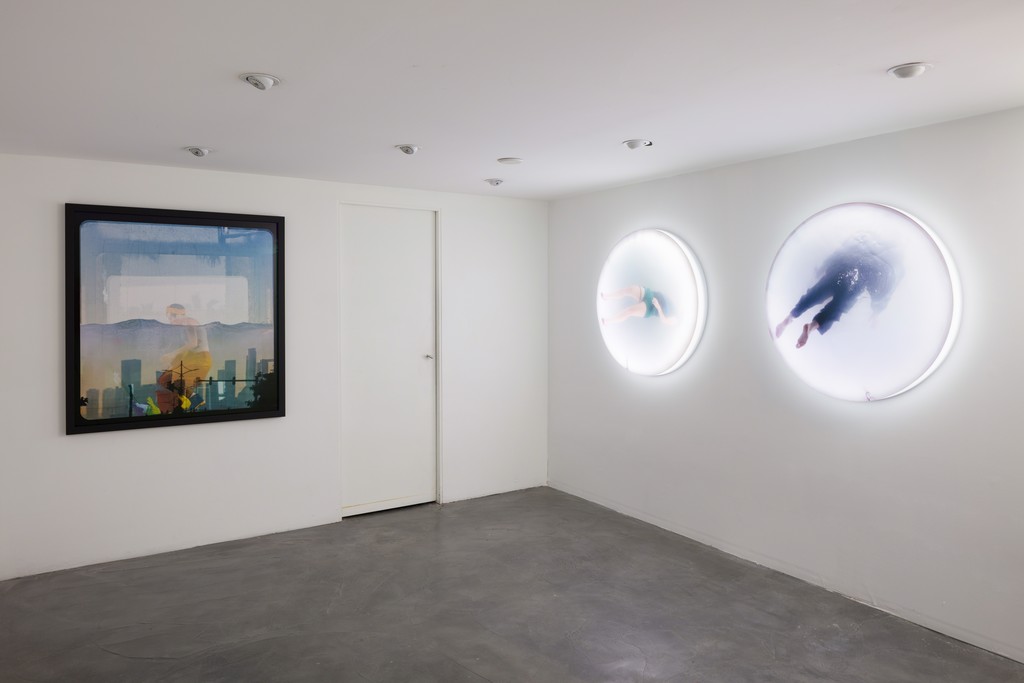 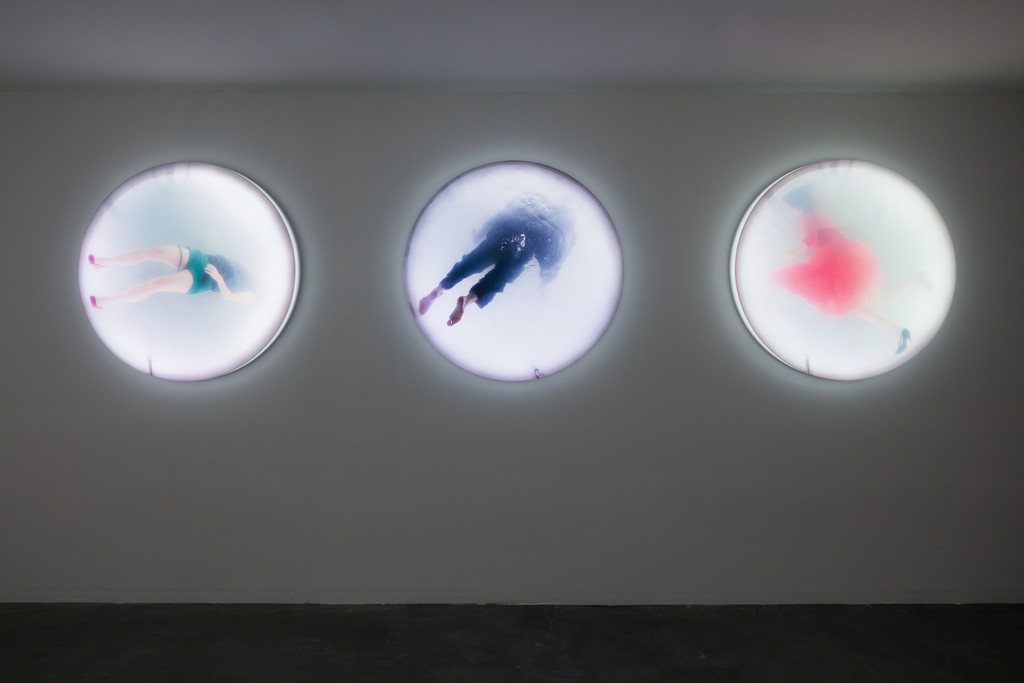 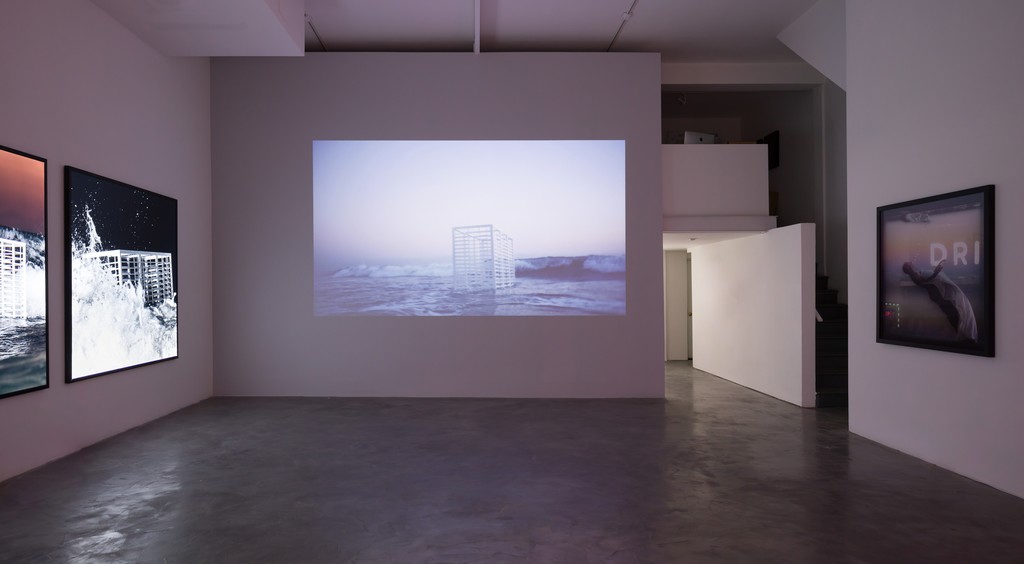 Luminaries is Lars Jan’s first solo show with Charlie James Gallery and includes new work from his two recent epic public projects: the performance installation, Holoscenes (Times Square, 2017), and kinetic pavilion, Slow-Moving Luminaries (Art Basel Miami Beach, 2017). Bound by the artist’s ongoing research into climate change and human adaptation, the projects focus on transformative collisions between water and both the human figure and architectural forms. The objects and media works in the gallery exhibition — featuring ‘light circumferences’ (frameless circular light boxes), light boxes, illuminated sculpture, prints, and video — evoke both the mundanity and allure of catastrophe. Cumulatively, the works conjure the alternately mythical and geologic narratives that our behaviors and buildings will be subsumed by the sea.

Included from Holoscenes are several ‘light circumferences’ from the Quaternary Suite (2015) and prints from the Anthropocene Suite (2018). Captured in a white industrial silo filled with the water, the light circumferences feature a man and woman suspended in near-limbo states, the liquid vessel and physical positions suggesting adults in utero. The prints feature images of performers in various stages of submersion carrying out everyday behaviors — making a bed, cleaning a window — during performances in public spaces in Abu Dhabi and New York’s Times Square. The images accentual the simultaneously reflective and transparent nature of the performance apparatus, presenting an intricate and indecipherable layering of body, object, and the metropolitan textures of the surrounding environs.

The three Luminary light boxes are each six-foot squares, featuring a single building-like sculpture in various stages of immersion at the ocean’s edge. Viewed together, the light boxes also comprise a triptych, joined by embedded geometries and a story-board like progression of past, present, and future. The single-channel video, Slow-Moving Luminaries, Point Dume (duration 00:03:20), features the same sculpture in a seamless loop of submersion and emergence, rendered in achingly slow-motion amidst sublime tones of oceanic twilight. Distortions subtly shift the integrity of the image throughout, as water pouring over and off the camera acts as a second lens.

A minimalist building-like sculpture of the same scale featured in both the Luminary light boxes and single-channel video occupies the center of the gallery, illuminated by LED neon. Its title, Luminary, 1 refers to the 1 Hotel South Beach, adjacent to the exhibition site of the Slow-Moving Luminaries exhibition, and on which its design is based. In tension with the other works in the gallery, the piece suggests the ephemeral nature of what we build, and stasis itself.

Artist, director, writer, and activist, Lars Jan is known for visually striking, genre-bending performance and installation works exploring emerging technologies, live gatherings, and unclassifiable experience. With his performance + art lab Early Morning Opera, Jan’s original works—including Holoscenes, The Institute of Memory (TIMe), and Abacus — have been presented by the Whitney Museum, Sundance Film Festival, BAM Next Wave Festival, Hammer Museum, REDCAT, Toronto Nuit Blanche Festival, Ringling Museum of Art, Pasadena Museum of California Art, ICA Boston, and Istanbul Modern, among others. In June 2017, Holoscenes, his climate change-themed installation featuring a massive aquarium sculpture and twelve tons of moving water, created a sensation in Times Square. As the winner of the 2017 Audemars Piguet Art Commission, Lars exhibited a large-scale kinetic pavilion on an acre of beach front during Art Basel Miami Beach this past December. He will stage Joan Didion’s seminal essay The White Album in winter 2018 in New York and Los Angeles. Lars is the son of émigrés from Afghanistan and Poland, on faculty at CalArts, and a TED Senior Fellow.