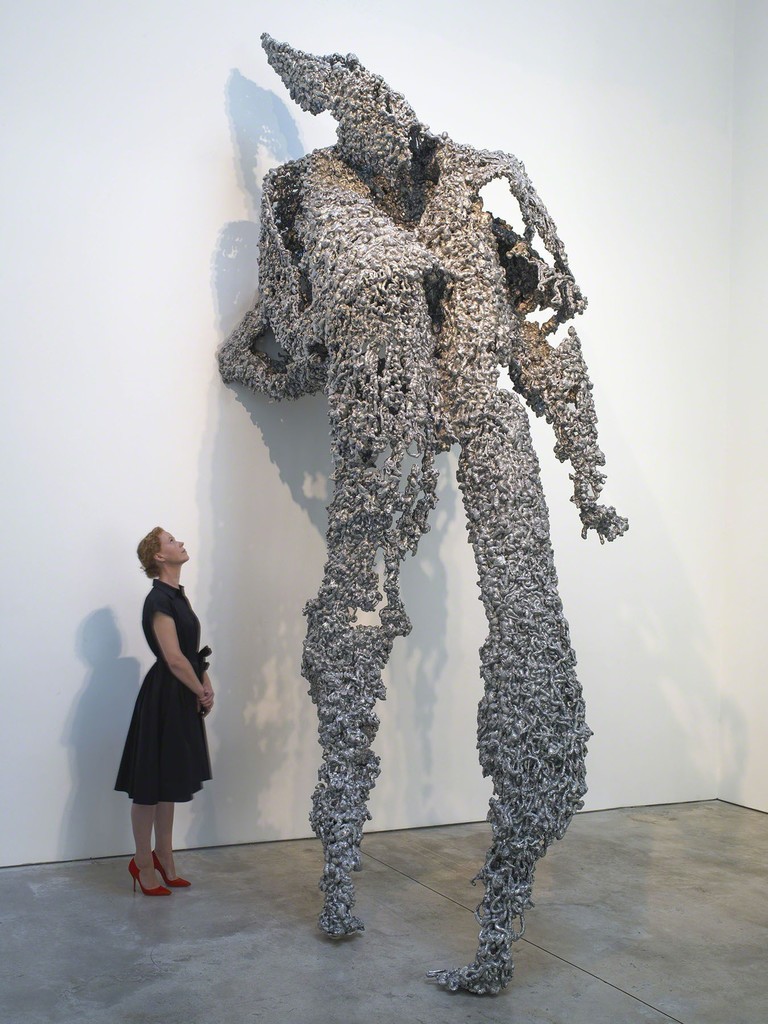 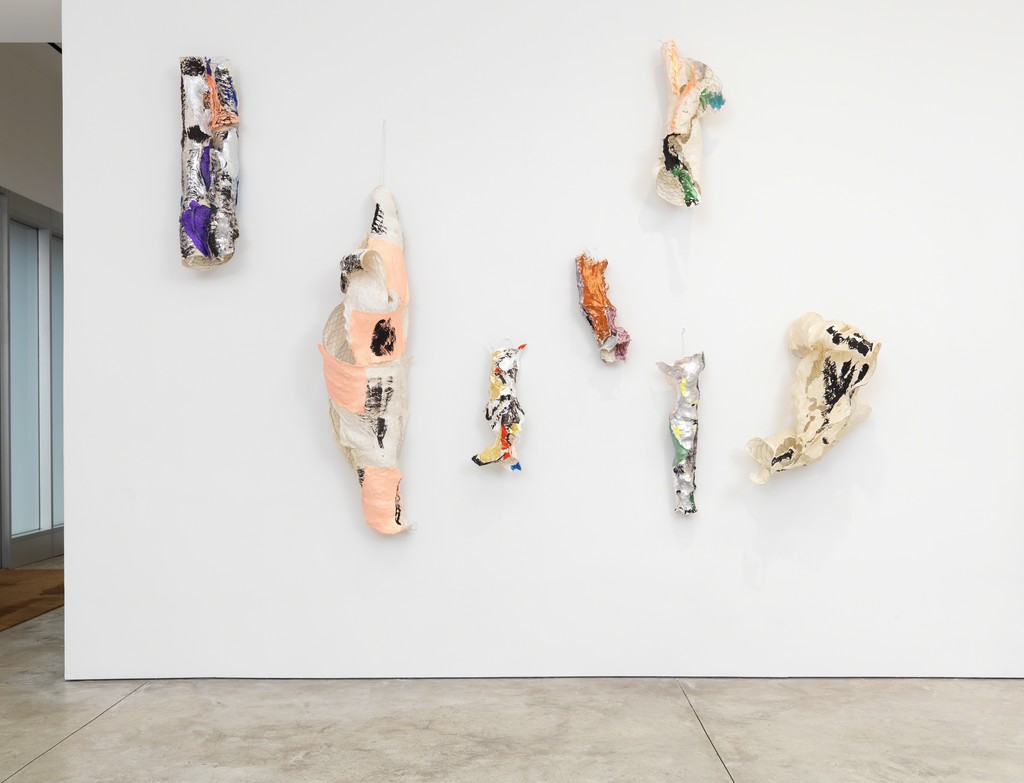 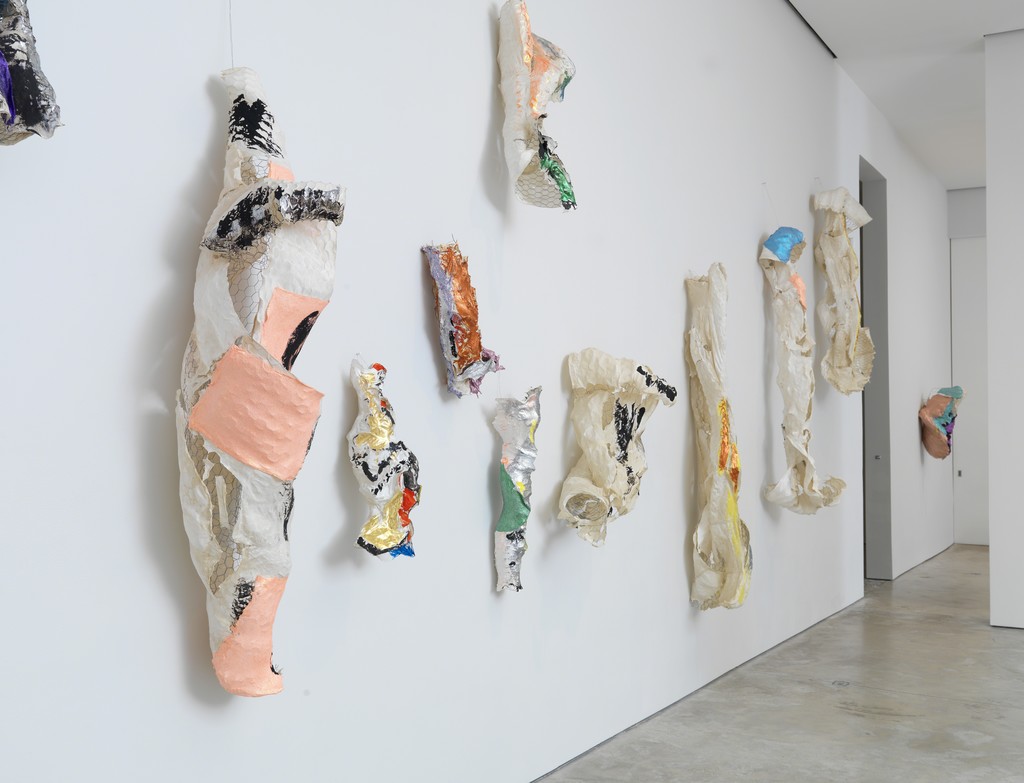 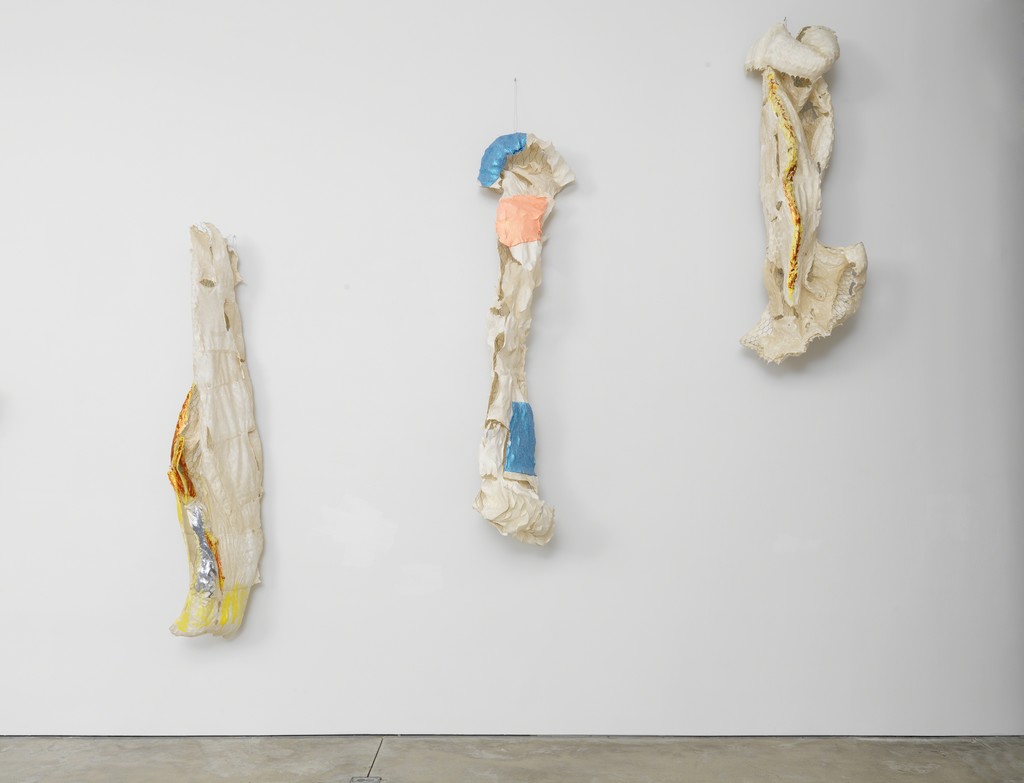 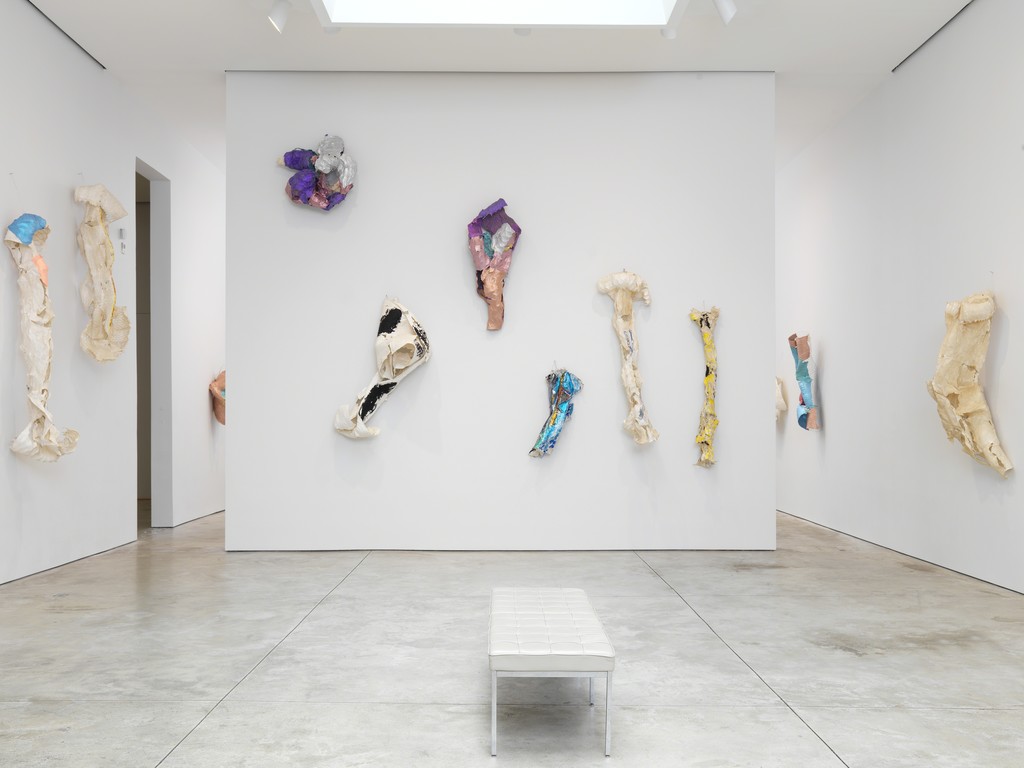 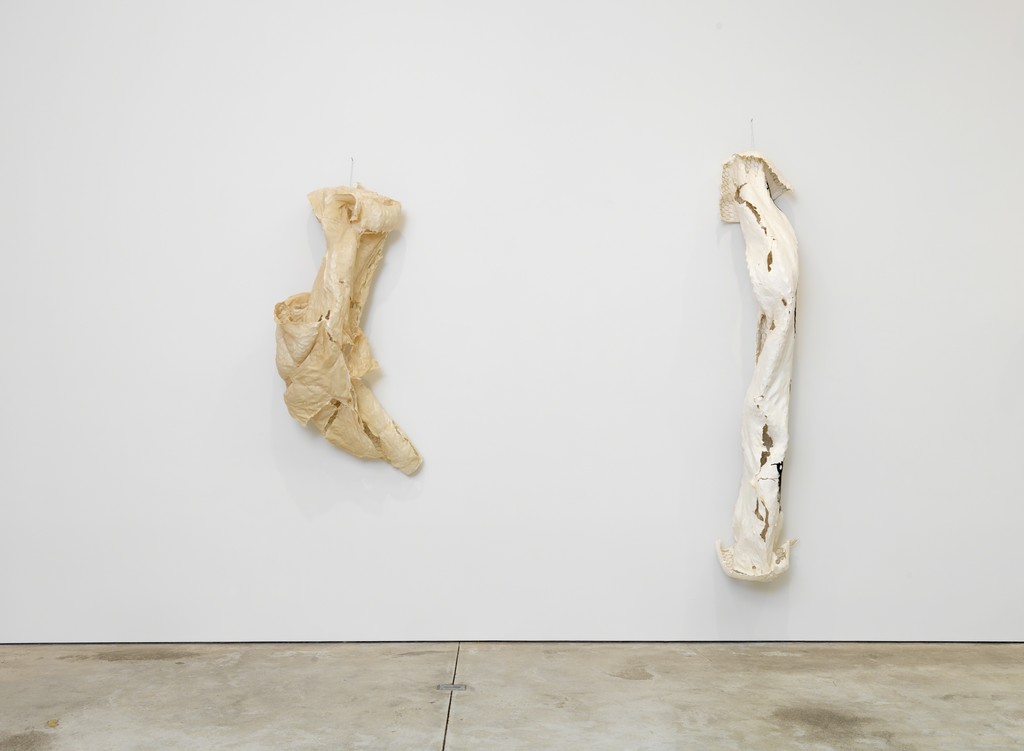 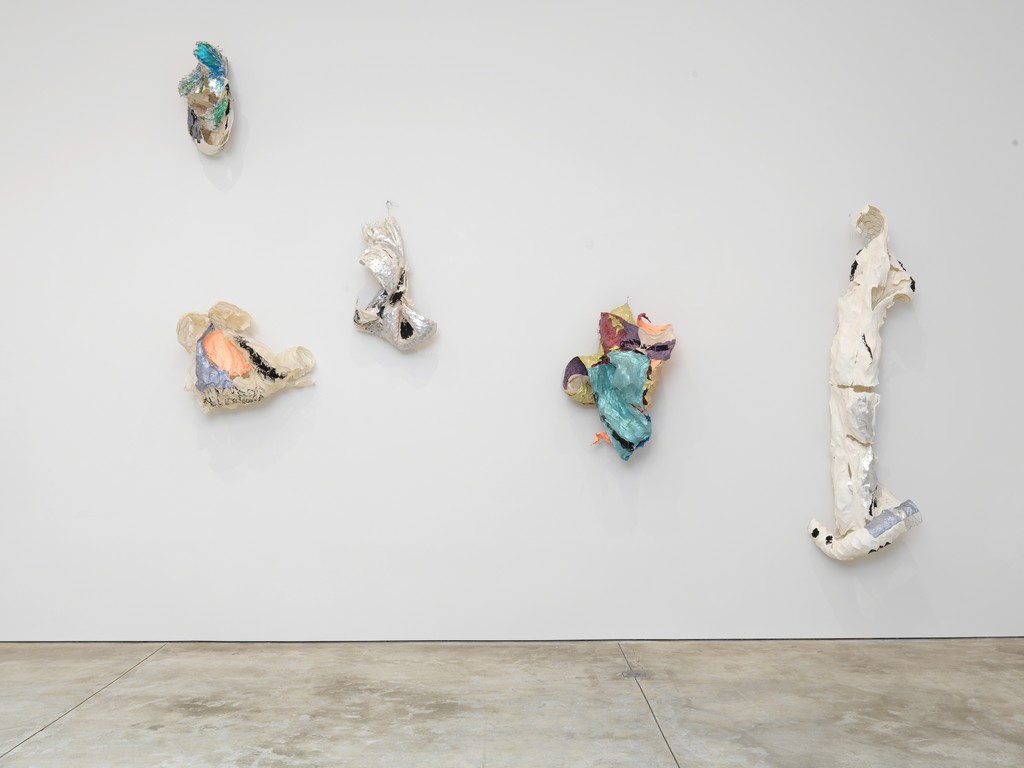 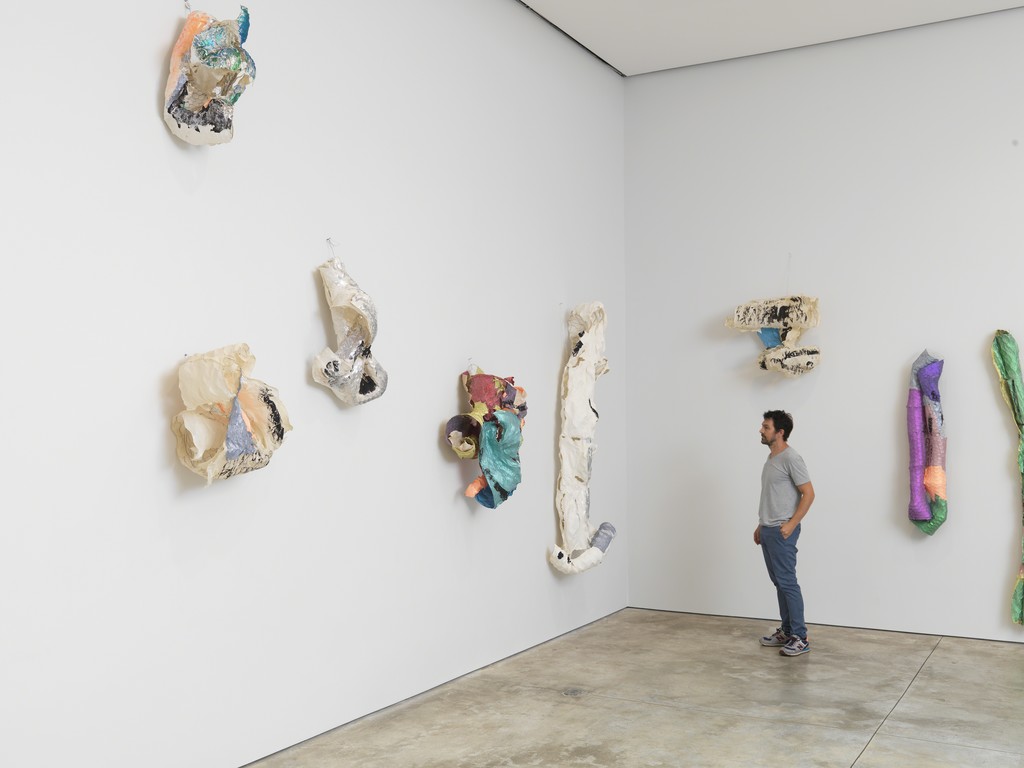 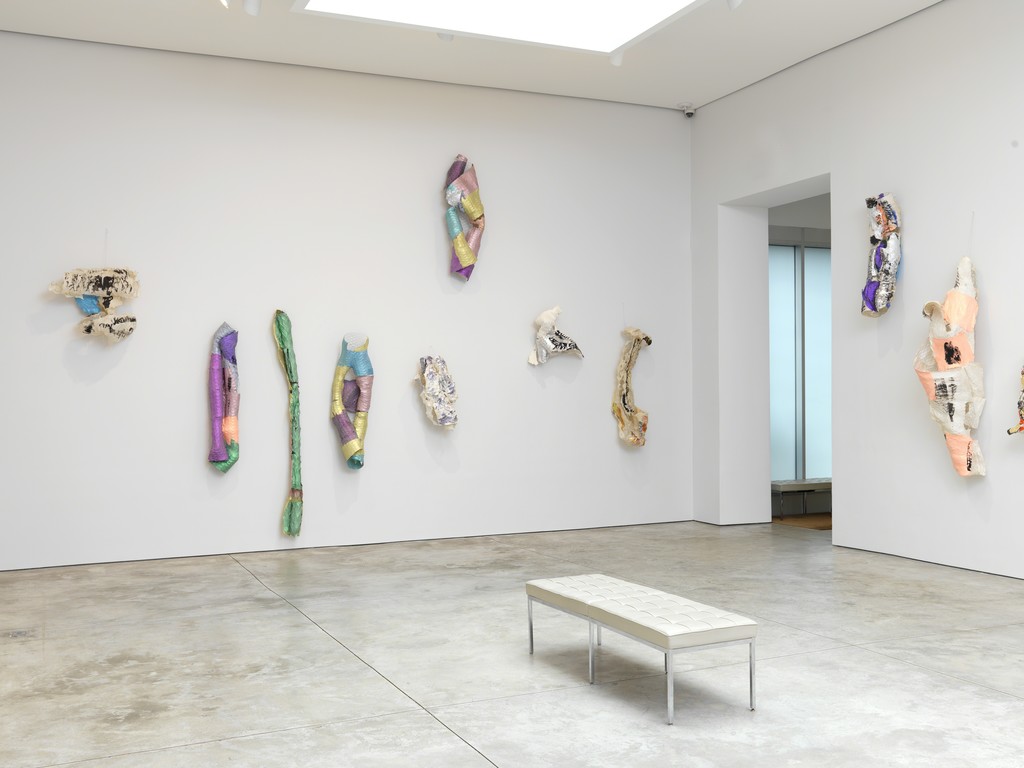 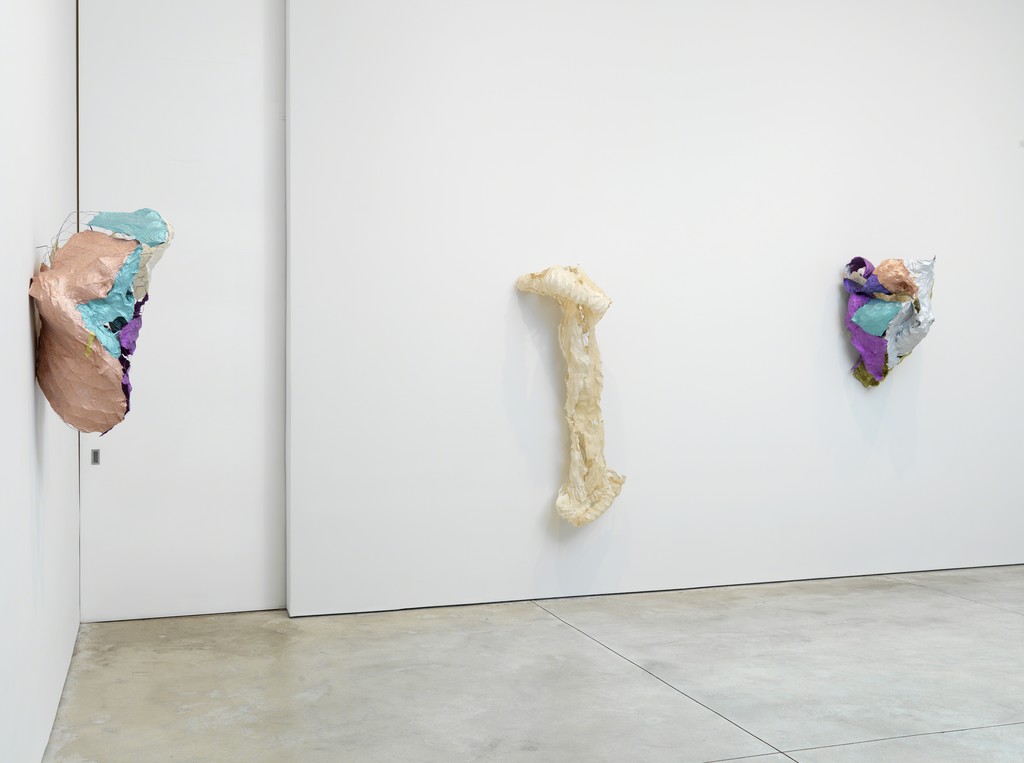 Cheim & Read is pleased to announce Lynda Benglis: New Work, an exhibition opening on September 8, 2016, and running through October 22. A catalogue will be available with an essay by Nancy Princenthal. This is Benglis’s sixth exhibition with the gallery.

Since the 1960s, Lynda Benglis has been celebrated for the free, ecstatic forms she has poured, thrown and molded in ceramic, latex, polyurethane and bronze. In her new work she turns to handmade paper, which she wraps around a chicken wire armature, often painting the sand-toned surface in bright, metallic colors offset by strokes of deep, coal-based black. At other times she leaves the paper virtually bare.

These works reflect the environment in which they were made, the “sere and windblown” landscape of Santa Fe, New Mexico, as Princenthal writes in her essay. “It is possible to see the bleached bones of the land—its mesas and arroyos; its scatterings of shed snakeskins and animal skeletons—in the new sculptures’ combination of strength and delicacy.”

Simultaneously playful and visceral, the new works enter into a lively dialogue with Benglis’s previous explorations of materials and form, but with a raw immediacy inherent to the moist strips of paper she uses as their skin. Stretched, crimped and torn into richly organic shapes, the paper becomes both the sculpture’s shell and a repository of the artist’s touch. “The flexibility of the paper is marvelous; it’s just very loving,” she tells the filmmaker Burrill Crohn in Benglis Skin Deep, a video interview on the making of this body of work.

The sculptures are light and open, with slits and apertures revealing their wire supports. “I’m drawing with air, and wire, and paper,” Benglis remarks in the interview. Princenthal compares the paper skins to shattered piñatas and animal hides, as well as to the kites that the artist’s father made by hand (Benglis attends the kite festival held yearly at Ahmedabad, India, where she maintains a residence).

The sexual politics at the heart of Benglis’s career is intrinsic to this work. The cylindrical shape of many of Benglis’s new sculptures can bring to mind phalluses and vaginas (“considered as tubes, one becomes the other”), and yet, as Princenthal observes, “Of all the sensations her work evokes, pure delight is among the keenest.”

Lynda Benglis is the recipient of a Guggenheim Fellowship and two National Endowment for the Arts grants, among other commendations. Her work is held in extensive public collections including the Solomon R. Guggenheim Museum; the Los Angeles County Museum of Art; the Museum of Modern Art, New York; the National Gallery of Victoria, Melbourne, Australia; the San Francisco Museum of Modern Art; the Walker Art Center, Minneapolis; and the Whitney Museum of American Art, New York.

Throughout 2016, the Bergen Assembly in Bergen, Norway, is hosting a series of exhibitions devoted to Benglis’s videos and sculpture. The Aspen Art Museum’s Roof Deck Sculpture Garden will host a group of her fountains through the end of October. In September, a major survey of Benglis’s work will inaugurate the Museo Internacional del Barroco in Puebla, Mexico, this is the first show of Benglis’s work in Latin America.