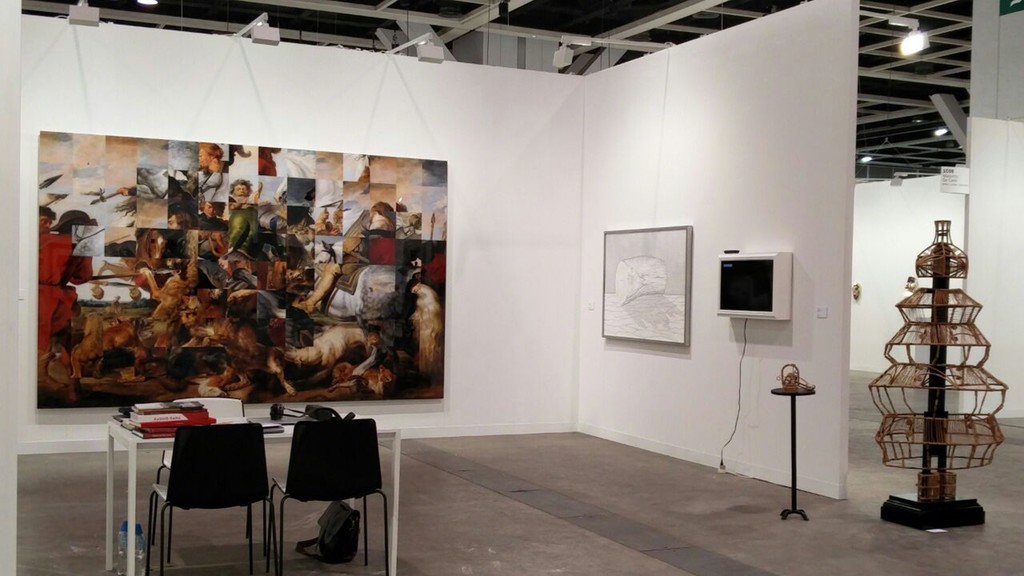 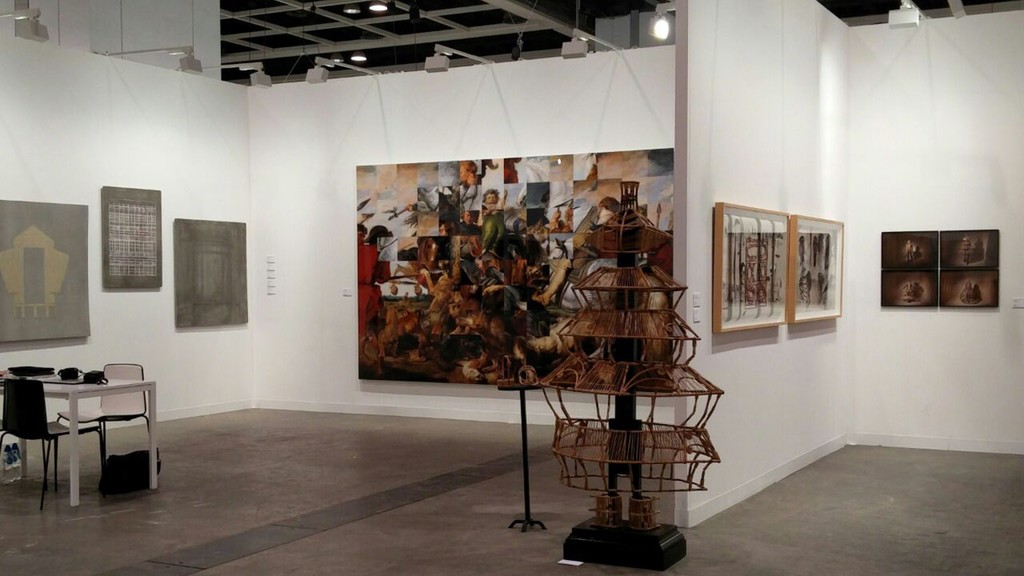 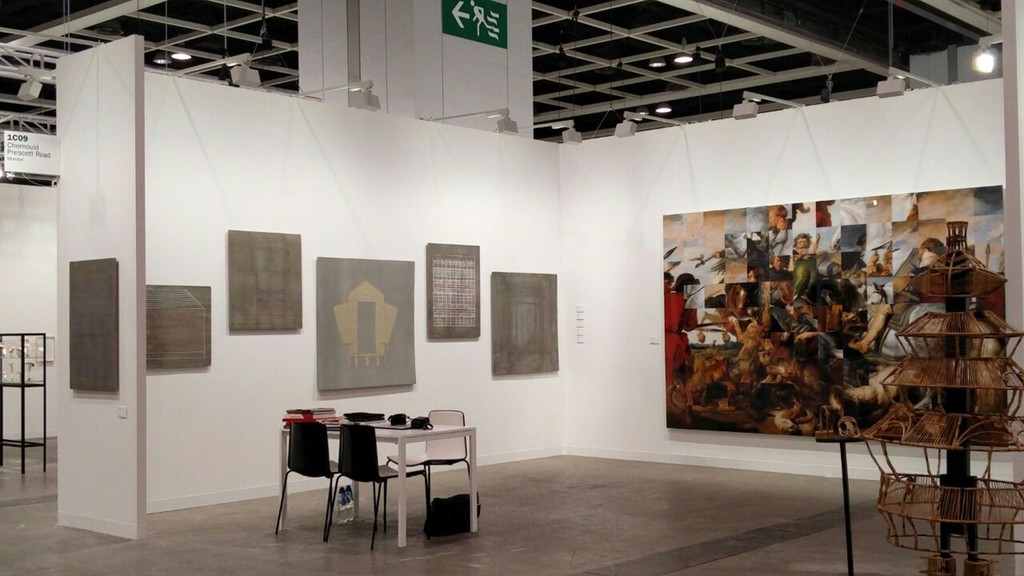 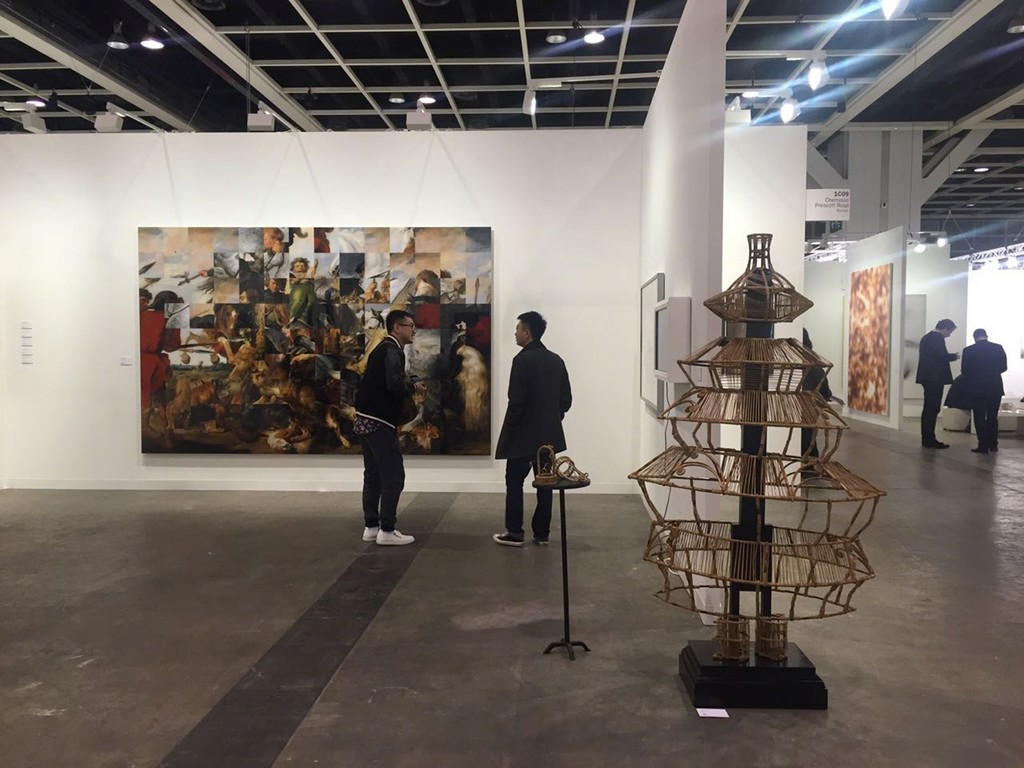 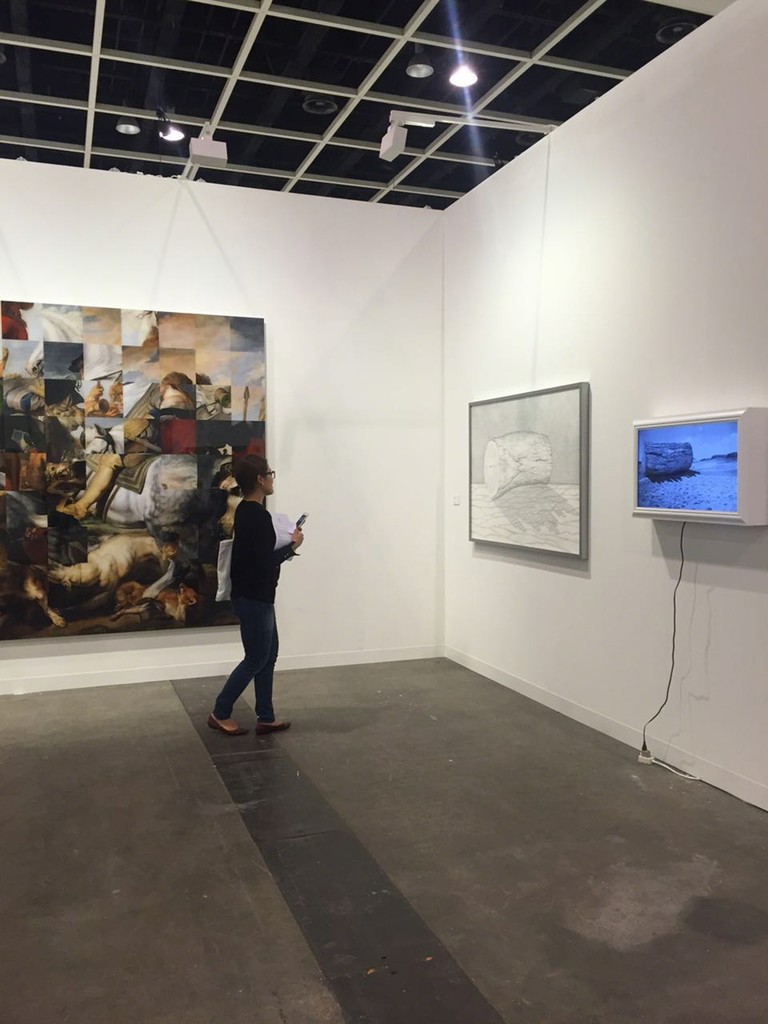 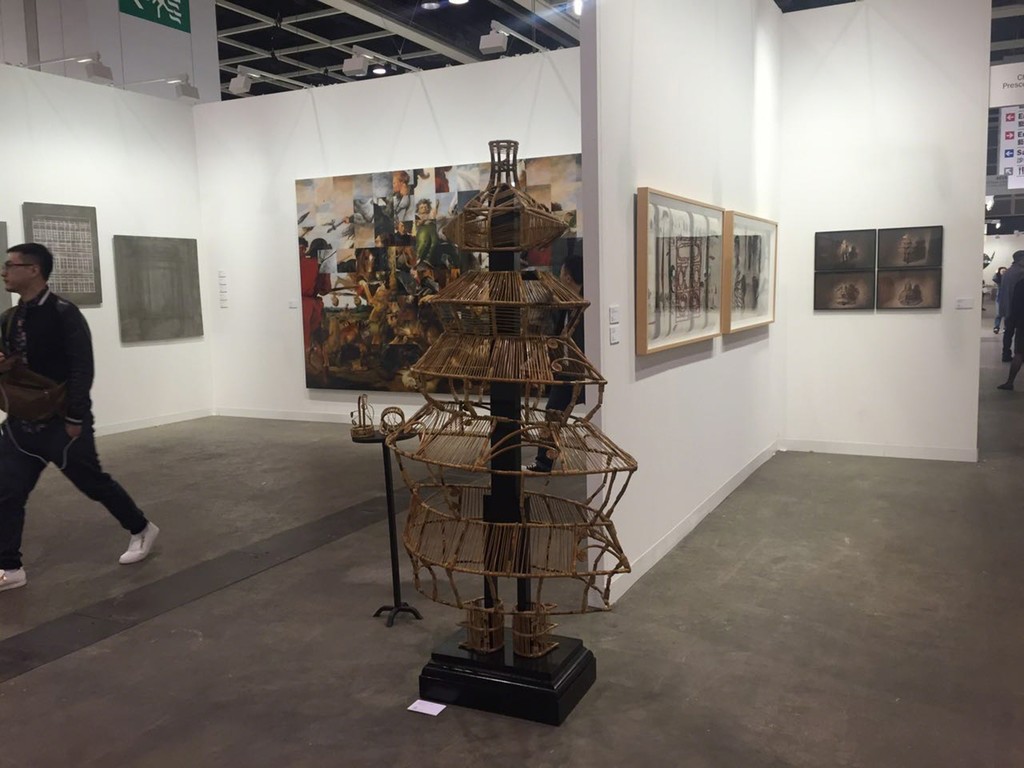 Anju Dodiya
Runway of Wounds – I
A woman in an European landscape begins a new journey. There will be wounds and healing. There will be courage in the face of ambiguous dilemmas.
Is this the troubled migrant?
Is this the puzzled artist trying to find herself?
Is that you outside the unknown labyrinth?

On a scenic map, one sees the imprint of a symbol, that could lead to the answers of Dodiya’s questions. In the contemporary world, multiple stories connect the movement of people, of circumstances and the unknown. The strands of the fabric panel of this art-work, weave these ballads together.

Runway of Wounds –II
Ancient Greek women come and go, facing the unknown, on foreign shores. Their coiffured hair and unfazed expressions will take on whatever the waves and the winds bring.
Their strength represents the triumph of every woman, out in strange cities, searching joy and adventure.
The symbiotic relationship between the keepers of the sea and the strength that women shoulder, can be uniquely discerned from their coiled crowns. Like the life giving shores, these women too are the semblance of unprecedented power.

Gigi Scaria
Gigi Scaria’s ‘Shadow of the Ancestors’ is part of a suite of paintings, graphite drawings and animation videos from his latest exhibition, The Ar. It resonates with one of the world’s most pertinent causes of concern: environmental destruction to accommodate ‘modernization’. Alluding to the myth of the Biblical Flood, this phoenix like razing of natural landscape to give birth to concrete jungles, troubles Scaria. Like a whisper of the past, these trees that form the graveyard of modern urbanization, seem to Scaria like the shadow of a past befallen to the twinkling lights of today. Both his video and his graphite work complement each other in narrating this global story.

Shakuntala Kulkarni
The project “of bodies, armour and cages” by Shakuntala Kulkarni attempts to address the paradox of the feminine body needing to be protected and that protective armour itself, becoming its cage.

An armoured body can extend its capabilities through the mailed fist, the spiked helmet, the radiation-proof bodysuit, or heightened fight/ flight reflexes. But the body pays for this protection with its freedom, as the armour becomes a cage.

Her austere, compelling sculptures demonstrate that the armour we create for ourselves does not save us from vulnerability; it dramatises the predicament of being vulnerable.

Bijoy Jain / Studio Mumbai
Made using the unique architectural medium of silk threads on cement sheet, these drawings are the echo’s of the first communication in any medium. Studio Mumbai thinks of a drawing as akin to a language, where it captures a moment in the life of a physical building, sometimes before it has even been built, sometimes much after it has given itself up to the vestiges of time.

Including elevation as well as top views, these set of works encapsulate the DNA of an idea, a typology, a dhobi ghat (washerman’s community corner), a building before and after its time and even a section of a bridge in a land far away. Made up of signs and symbols, these drawings are instinctive and direct.

Rashid Rana
Violence, despite its many manifestations, continues to refer to itself, thus creating parallels across time and space.
Such parallels inform Rana’s ongoing ‘Transliterations’ series whereby the pictorial language from a particular age and location finds itself reborn and re-examined in the vocabulary of another set of spatial and temporal coordinates.
In Covert Overt, 2016 a classical pictorial composition from Rubens’ Wolf and Fox Hunt, c.1616 has been dissected into fragments and rearranged to align with the format of a media picture covering a protest scene in recent times from Pakistan. The latter is an image of a rubber tyre on fire and carries overt political significance unlike Rubens’ covert reference to violence in the hunting scene. However, when assembled with fragments of this hunting scene, the protest image is only obliquely present in the final work, unsettling the still picture from its fixed chronological niche.