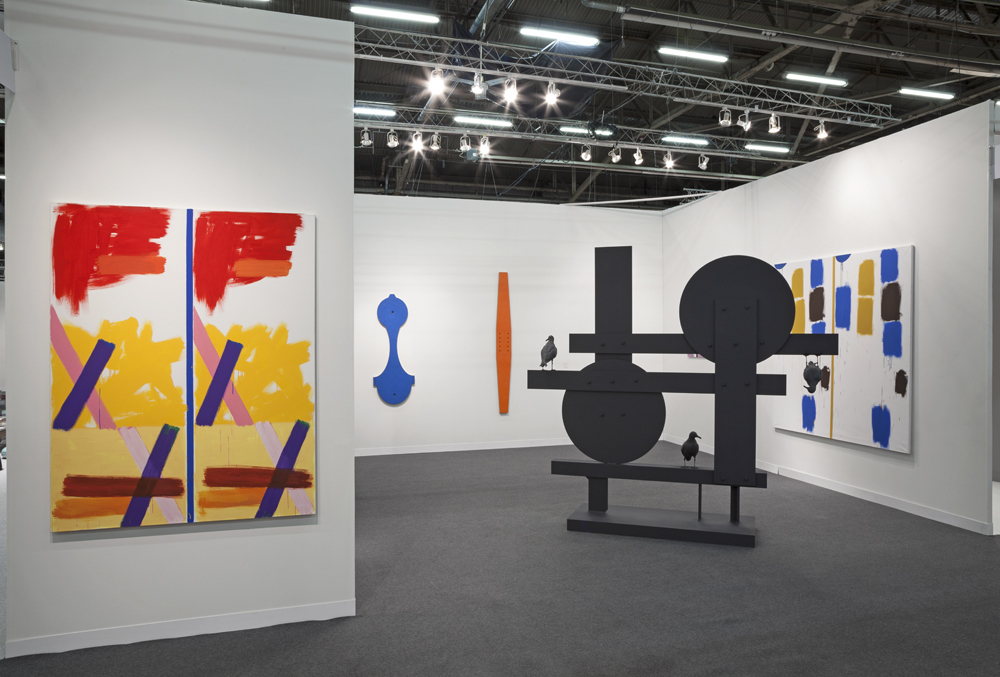 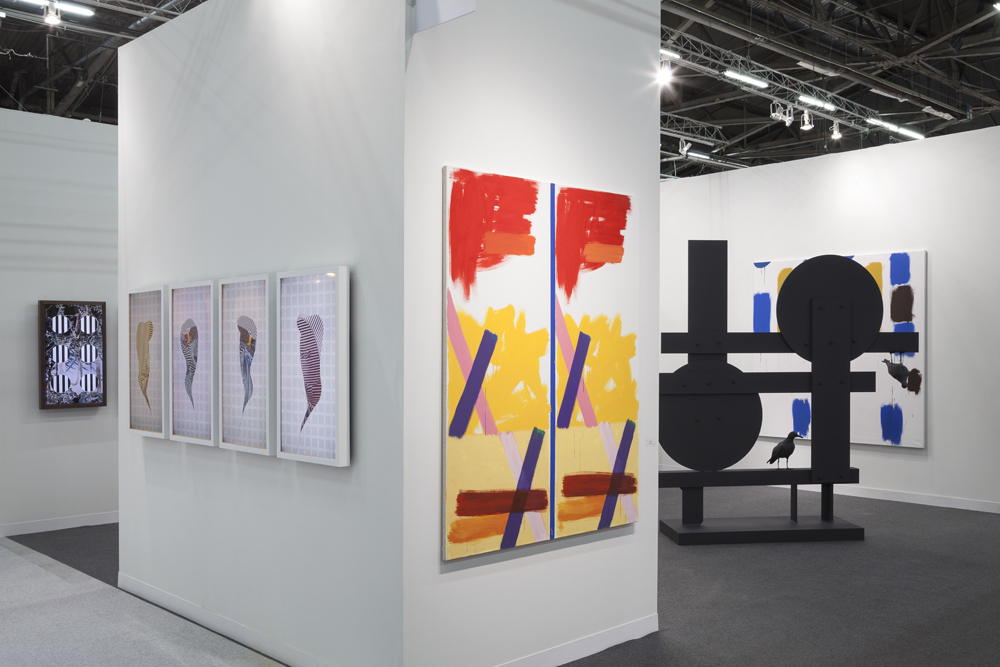 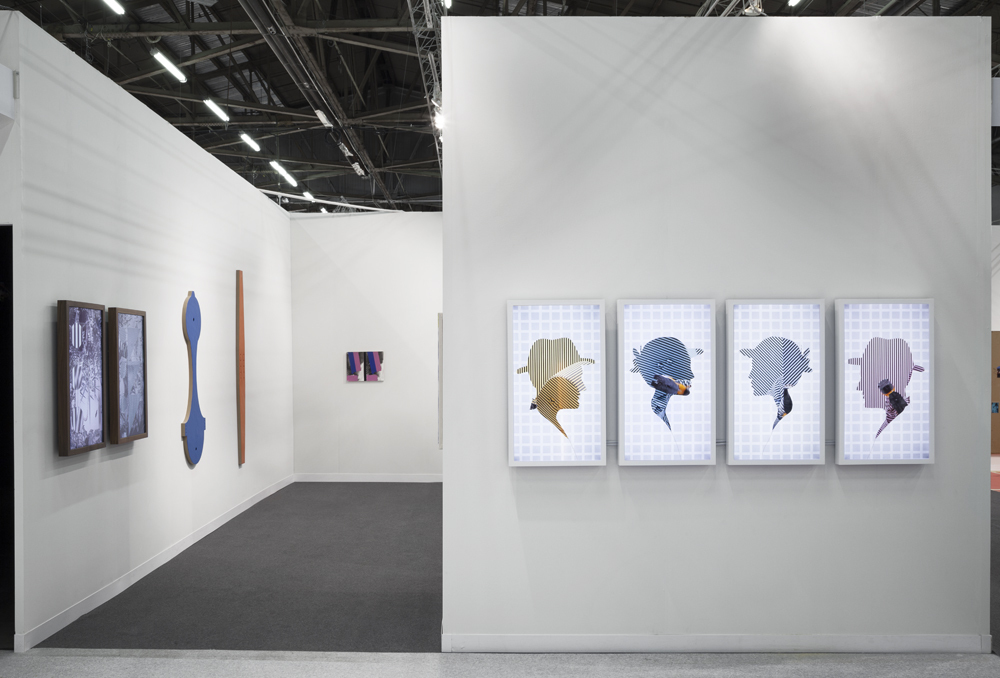 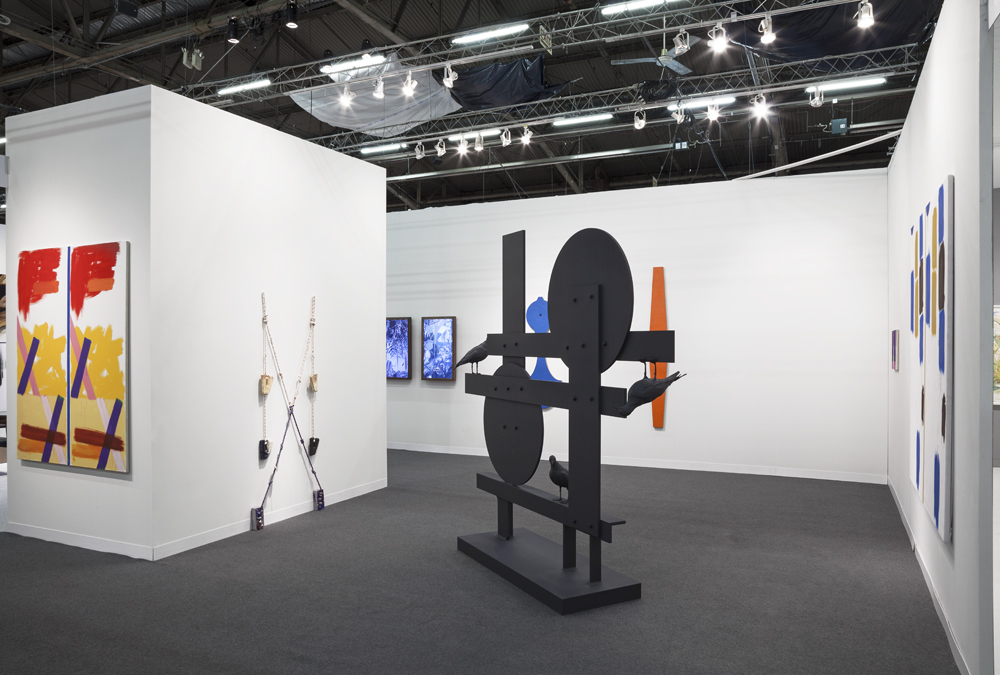 Cherry and Martin’s booth features The Desmond Four, a monumental new four-panel video piece by Brian BRESS. The Desmond Four was completed in conjunction with Bress’s recent solo LAND project at the former site of the landmark Desmond Hotel in Los Angeles. Bress’s four-part video work records four isolated characters, each of which cuts through a collaged board with a reciprocating saw. In doing so, they reveal their presence to the viewer. The actions of these characters distort our sense of flat and pictorial space. A selection of single and double panel ‘cutter’ video works by Bress, such as Two Diamonds, Two Circles, will also be included in Cherry and Martin's presentation. Bress’s solo exhibition, Brian Bress: Make Your Own Friends, is currently on view at the Museum of Contemporary Art (Denver, CO) and traveled from the Utah Musuem of Fine Art (Salt Lake City, UT).

Katy COWAN will exhibit new sculptural works. Staple Guns and Bricks and Donut and Lines Variation is sourced from the elements in her immediate environment. Cowan’s wall-mounted sculptural pieces record—through casting and other methods—the objects and materiality of her studio. The cast objects Cowan makes are connected by and suspended on dyed and braided ropes also made by Cowan. Works like Staple Guns and Bricks and Donut and Lines Variation explore the formal qualities of presentation as well as systems of signification. Cowan received her MFA from Otis College of Art and Design (Los Angeles, CA) in 2014 and in 2015 was included in group exhibitions Condensed Matter Community organized by the University of Wisconsin Madison’s Physical Sciences Laboratories.

Nathan MABRY will present, The Nostalgia of the Infinite (Le Rhinocéros), a large-scale sculpture made from cast and welded sheet metal. Like many of Mabry’s recent monochrome works, The Nostalgia of the Infinite (Le Rhinocéros), references the forms of mid-century American sculptural practice, while at the same time alluding to the roots of these forms in other traditions, such as African Art. Intrigued by the visual avarice of Modernism, Mabry makes sculptures that are both expressive of his experience and referential towards that of others. Mabry’s works are direct and circumspect. Cast metal birds—some upright, some inverted—perched on the forms of The Nostalgia of the Infinite (Le Rhinocéros), prompting age-old questions with regard to viewership and the authorship. In March 2016, Cherry and Martin will present his fifth solo exhibition with the gallery.

Since the early 80’s, Bernard PIFFARETTI has approached the blank canvas with a first mark: a single line that he paints down the center of each work. This first mark has been described as “a sort of question,” rather than a defining line, a statement, or a figure in space. Piffaretti paints a composition on one side of this line and then attempts to paint a duplicate on the other side. FRAC Franche-Comté curator Sylvia Zavatta writes that, for Piffaretti, that first line opens up “the distance he needs to concentrate on his real purpose: painting itself.” In looking at Piffaretti's work, our eyes move through his compositions, matching color and shape, line and texture in a dynamic, yet strangely looping fashion that wraps back upon itself. During The Armory Show, Piffaretti’s work will be on view in Reflection, a group exhibition at Andrea Rosen Gallery (New York) with Larry Bell and Anne Collier.

Referring to the scraped layers of Plasticine clay that cover his wall-based works, Michael REY comments that he wants his artworks to be as fragile as we are: solid yet ephemeral; immediate yet ultimately unknowable. Michael Rey has written that the shapes, which comprise his wall-based works, several of which are featured in Cherry and Martin’s presentation, come to him in his dreams. This has led at least one writer to say that Rey’s works “operate poetically, rather than pictorially.” A counter-argument might be made that Rey's works open the door to poetry precisely because they operate pictorially. Rey’s use of shape and color has evolved toward a non-hierarchical relationship within his compositions; his attentiveness to surface insists on the ‘objectness’ of the wood panels on which he layers Plasticine and oil paint. Rey has exhibited international and most recently been included in the group exhibitions at the Fredrick R. Weisman Museum of Art (Malibu, CA) and the Swiss Institute (New York).

For further information and images contact Philip Martin at +213 422-9286 or [email protected].